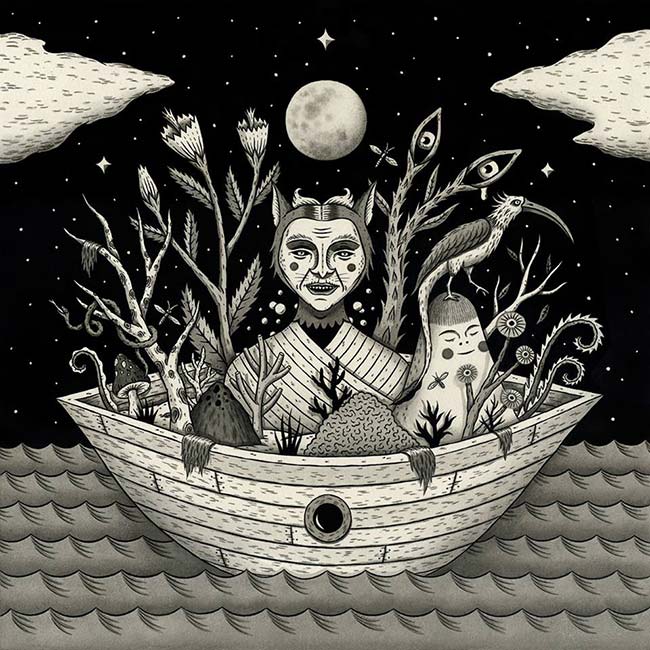 I should know Jon better than I do. I featured him in my book “The Tall Trees of Portland” and I have used his art at the gallery on more than one occasion. I have been fascinated with the juxtaposition between his quiet calm demeanor and the perceived darkness in his work for quite some time. Last week I decided to get to know Jon better by way of cocktails and pate at my local watering hole. We discussed our mutual love of classic painters like Carravagio and Boticelli as well as discussing his history. I can’t help but think of Bosch when I see Jon’s work. Especially in pieces like “Three Adventures in the Life of a Vagabond”. There are so many elements to inspect. The difference is the lack of a moral or clear narrative. I think it’s far more mysterious. 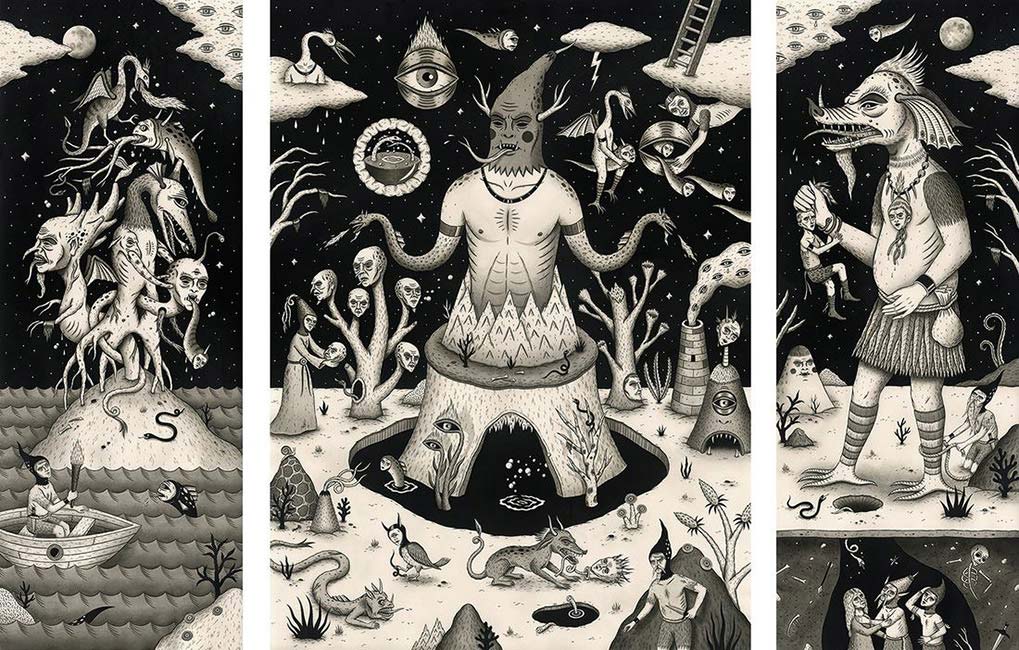 Jon, the other night I asked you why you don’t use color in your work and you responded with “I do, black”. So let me clarify. Why don’t you currently use colors other than black in your work?

I began experimenting with India ink back in 2005 and in 2008 really started to actively create the world and characters my work is most known for these days. India ink is inherently black, and I just happened to experiment with it after deciding I was moving away from using micron pens and graphite to make my drawings. I was also using found paper at the time (old sheet music and yellowed book pages) and I liked the subtle, warm tones that were achieved with layering the black ink (often diluted to gray tones) over the old paper. Using the black ink just kind of stuck. My use of blacks and grays was never some kind of statement in the beginning or dislike of color. My work all the way up through college was quite colorful and I worked in many different mediums I’m sure some people would be surprised to learn today. My sketchbooks continue to be a great place I continually experiment with color. I also use color quite a bit in my commercial illustration work as well as sporadically in my gallery work. These days, I do feel like the black and gray palette compliments my drawing style and imagery, perhaps due in part to my art influences which often have a similar palette. 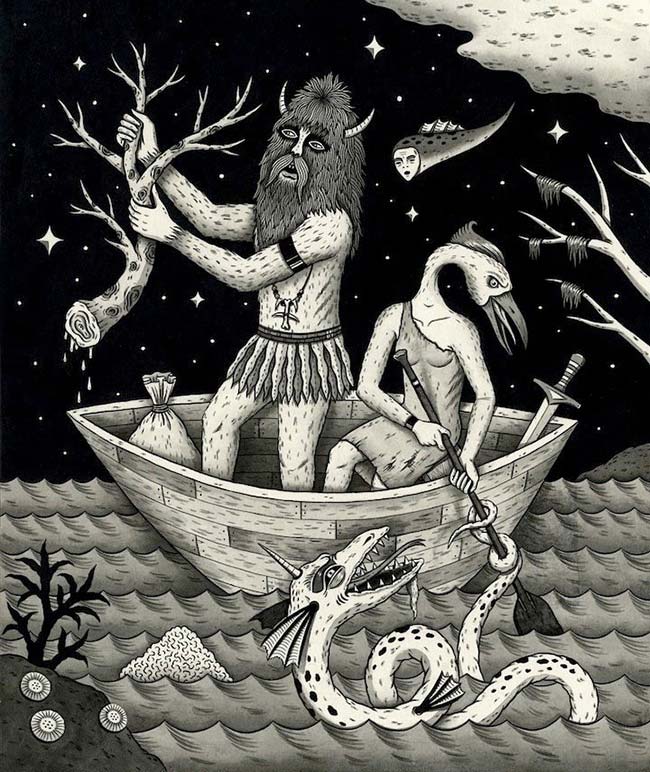 You grew up in Michigan and later went to art school in Baltimore. We talked about how one of your shows had a comment book for visitors and a few of them said your work didn’t belong in the space or that it didn’t fit. Why didn’t you learn to make pretty pictures with cute animals in art school like everyone else? Did you feel like you were on the outside in art school? How do you deal with criticism now?

I have never been that drawn to art that is merely cute. There has to be more to it than that for me to really be engaged by it. Also, what is beautiful is a totally personal and subjective thing for everyone. The work that I do these days is not like the work I was doing in college. Like I said, my work was pretty colorful back then and I was experimenting with all kinds of styles and mediums (as one usually does in the formative years). In art school, so many people are doing weirdly experimental work, so it probably would have taken a lot for me to feel like I was on the outside. I think in my daily life, most of the people I interact with in regards to my art, are in contact with me because they have a positive opinion of my work. But if I do encounter criticism, I am always open to it if it is constructive. In terms of the quality and execution of my work, I think I am my own biggest critic. If people criticize the perceived “dark nature” of my work, that rarely bothers me anymore. I realize everyone has their own opinion and my main goal as an artist is not to please everybody. If it makes some kind of strong impression on the viewer, positive or negative, that is good enough for me. 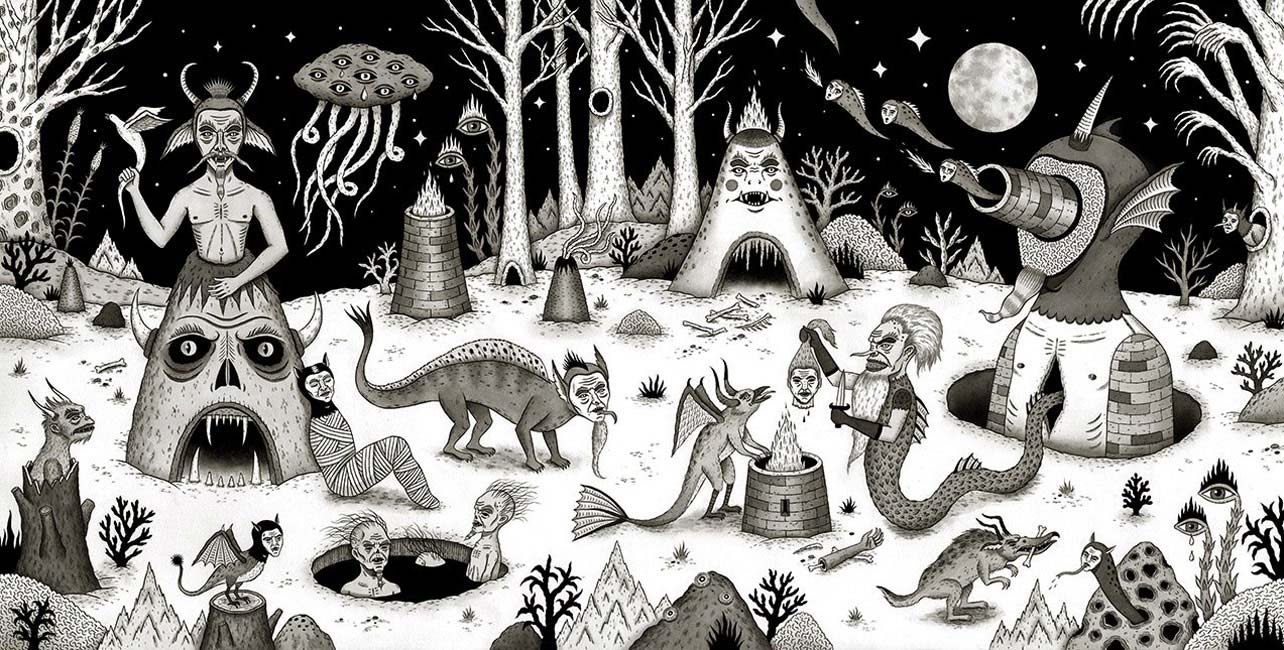 You mentioned that you learned about classic painters from surfing the early days of the net as a kid. Who is one of your favorite masters? What do you like about them?

I remember being really interested in the work of Pieter Bruegel the Elder as a kid in middle school and high school. I didn’t really know anything about art history at that time, but his images were immediately fascinating to me. I remember seeing his paintings “Dulle Griet” and “The Triumph of Death” and getting sucked into the elaborate scenes of swarming figures and creatures. The atmosphere of those works was so ominous and mysterious. I felt like I could examine those pieces for long stretches of time and notice new details every time. Also, the strongly narrative tone of the work really spoke to me and even though they were still enigmatic images that I didn’t fully understand the meaning of, I was totally entranced by them. That sense of narrative and mystery is something I value in my own work. 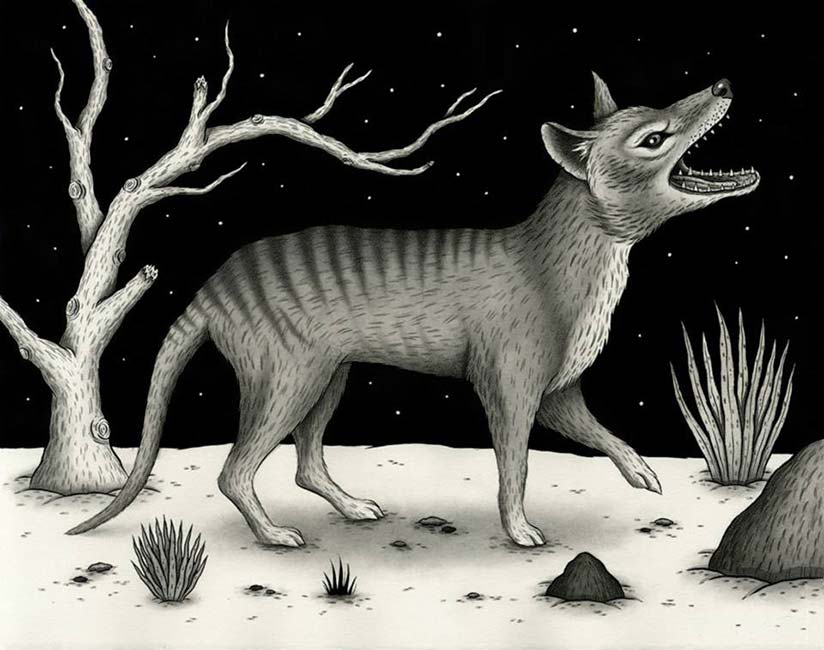 You are currently in the “Don’t Wake Daddy” group show in Hamburg, Germany. You were also in last year’s show and attended the opening. What was it like visiting Germany for your first international show? What was the response from the Germans to your work? Did you enjoy the curry wurst?

Visiting Germany was a wonderful experience. I found so many of the artists I met there to be great people and the quality of the work in the show was excellent. The whole show overall had a positive response, as I heard numerous local people exclaim that the “Don’t Wake Daddy” show was a much anticipated show in Hamburg every year. The aesthetic of the show is definitely unique. I feel like it is easier to comment on the response of the show overall than my work in particular. I should also mention that my first international show was actually in Glasgow at a place called Recoat Gallery. Sadly I cannot comment on the curry wurst as I did not get the chance to eat any. I will have to save that for the next visit. 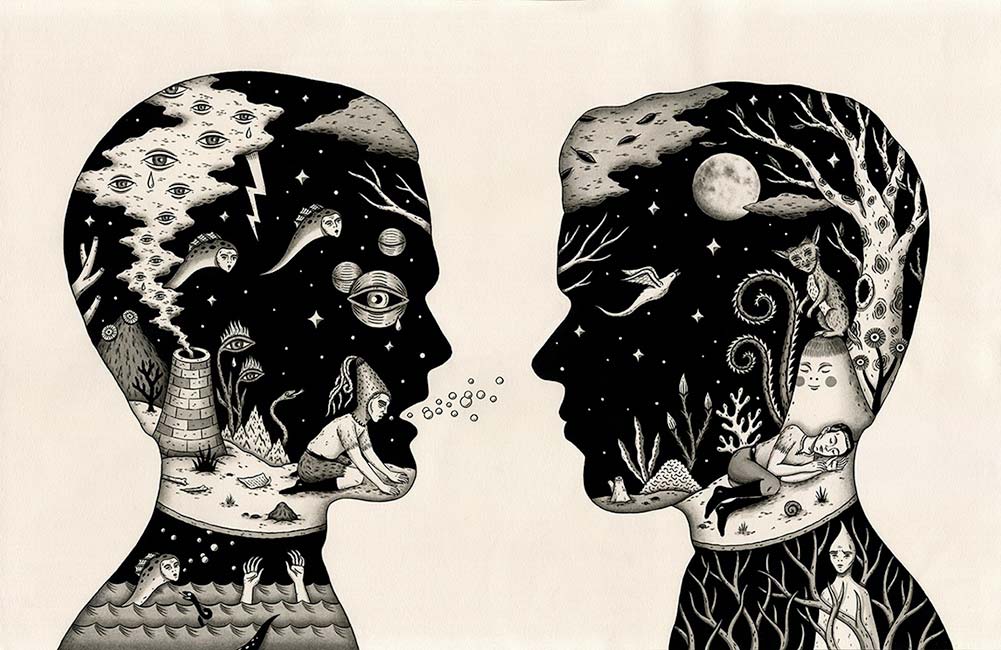 You contributed work to this years “Post It” show at Giant Robot in Los Angeles. How did you adjust for the small size of the post-it?

I pretty much drew things at the scale that I normally do, but due to the size of the paper, I just drew less. I was extremely pleased to be part of that show. It was something I had wanted to participate in for quite a while.

After Baltimore, you came to Portland. What brought you out here? Is this home now or do you see yourself moving away some day?

I had been participating in shows in Oregon as far back as 2009 when I was still living in Baltimore. Then I moved back home to Michigan for a couple years and continued to show work in Portland at places like Pony Club and Grass Hut. I never intended to live in Michigan permanently, so when I came out to Portland for a show in 2010 and had such a nice experience, I decided that was where I would move. It definitely feels like home now after close to three 3 years. A lot can change in a person’s future, so I can’t say for sure whether moving again is in the cards. At the moment I am quite happy here. 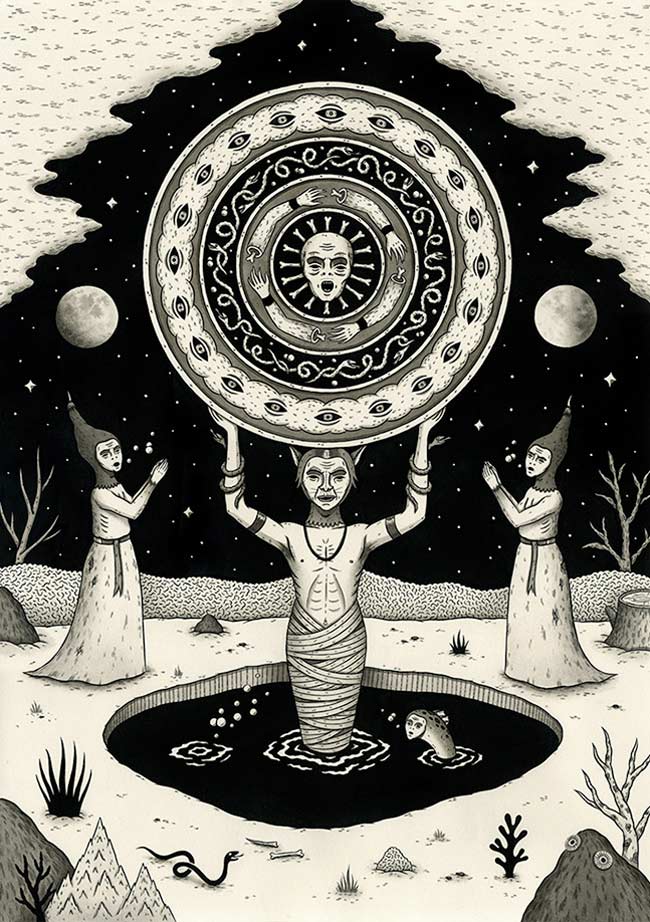 Do you have a plan for where you are going with your art or are you just a “seat of the pants” kind of guy? What’s next?

I just let things develop naturally for the most part. Sure, there are certain things I want to try with my art, but in terms of some kind of massive, grand plan, I don’t have one. I just want to continue to enjoy making work and having a passion for it. If I ever lose that or find myself in a situation where I really am feeling a lack of excitement anymore in that arena, then some planning for the future might be needed. I never intended to make work to show in galleries. After graduating college I just thought I would do illustration full time and that would be that. But the gallery work just kinda sneaked in there over time and has developed into something that I really enjoy doing now. But to say that was planned would be untrue. In terms of new directions, I have already begun brainstorming about some ways to move my work into a slightly more 3-dimensional format. I am excited about the possibility of that. 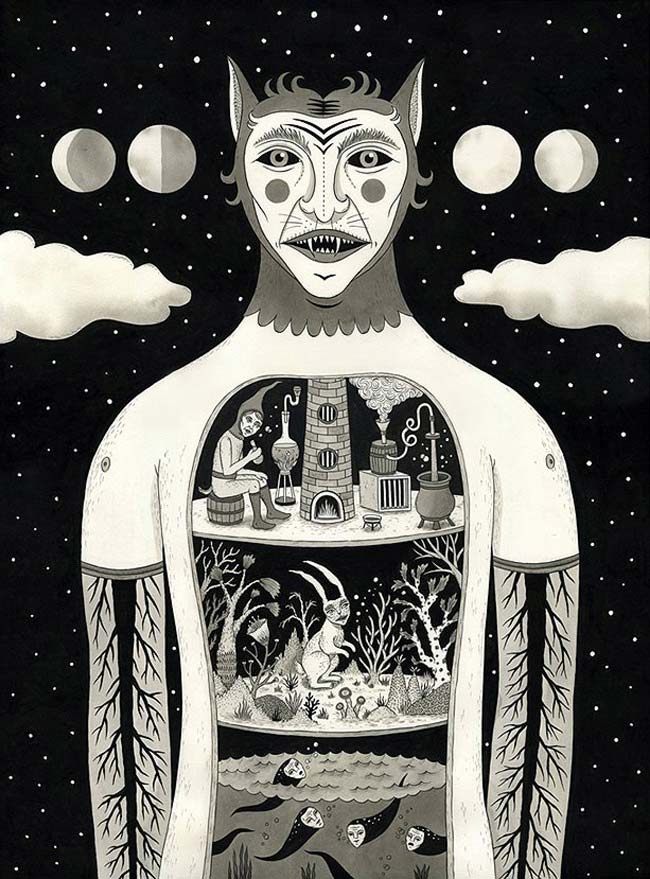 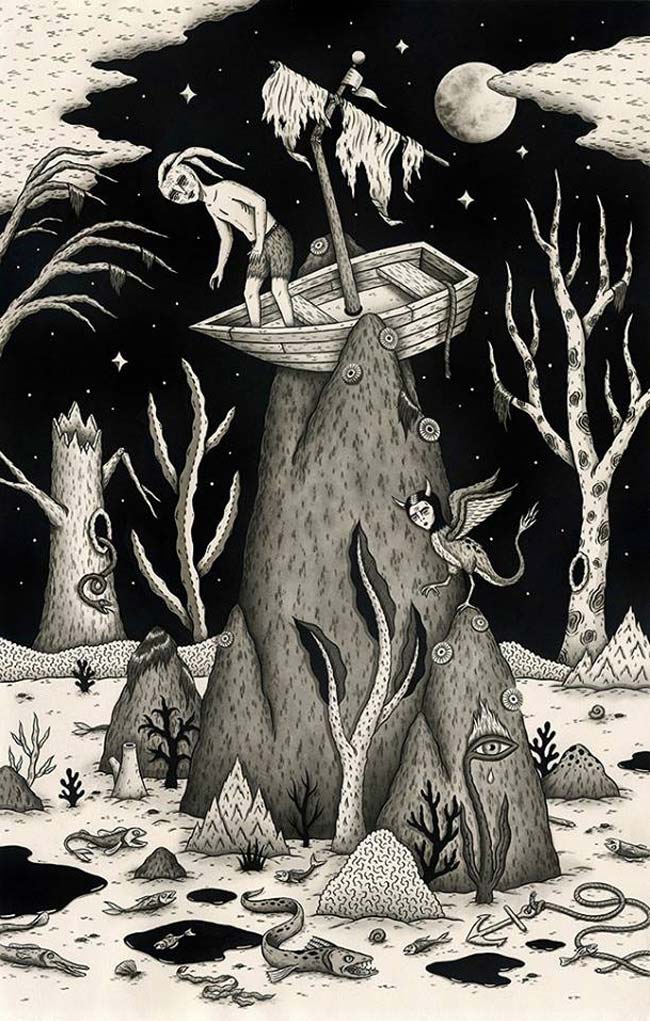 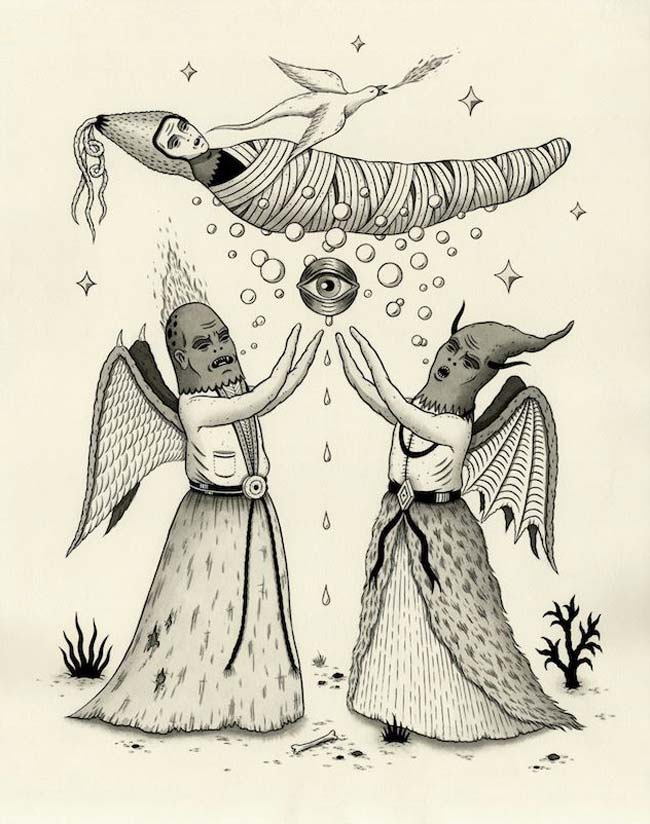 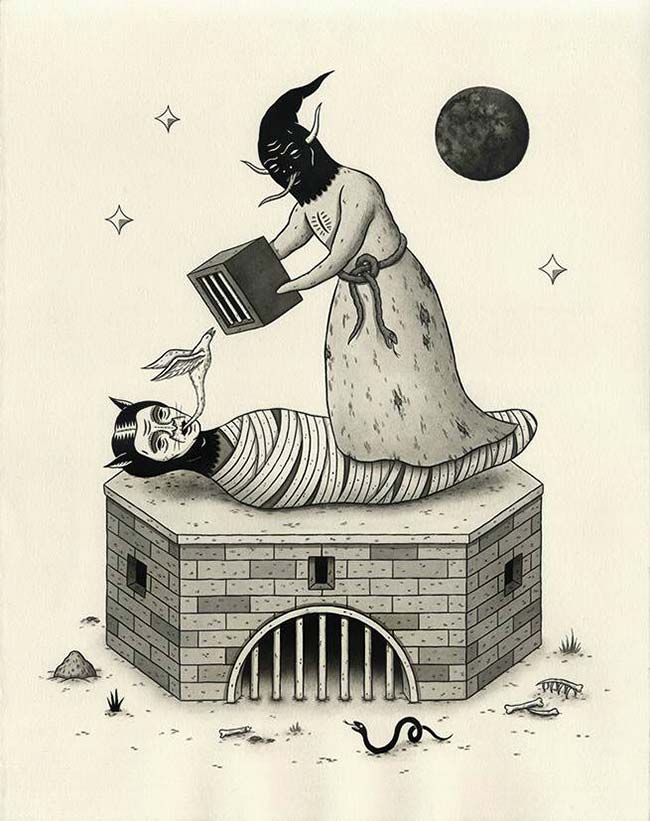 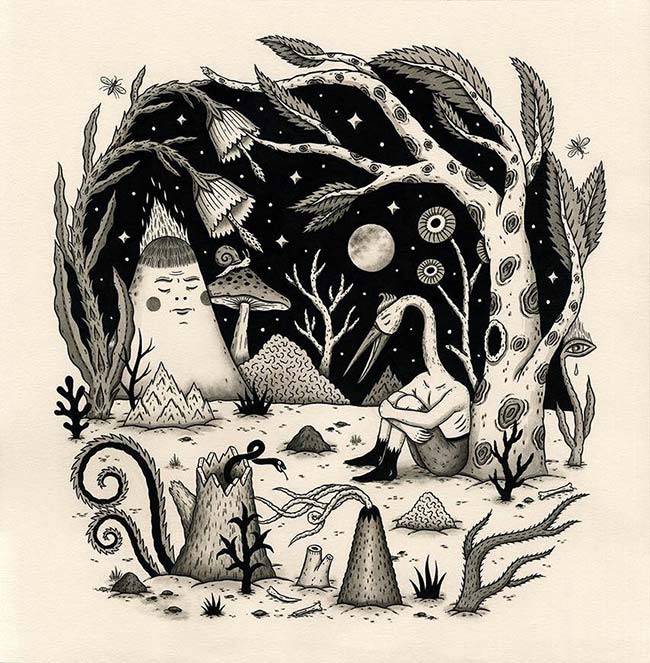 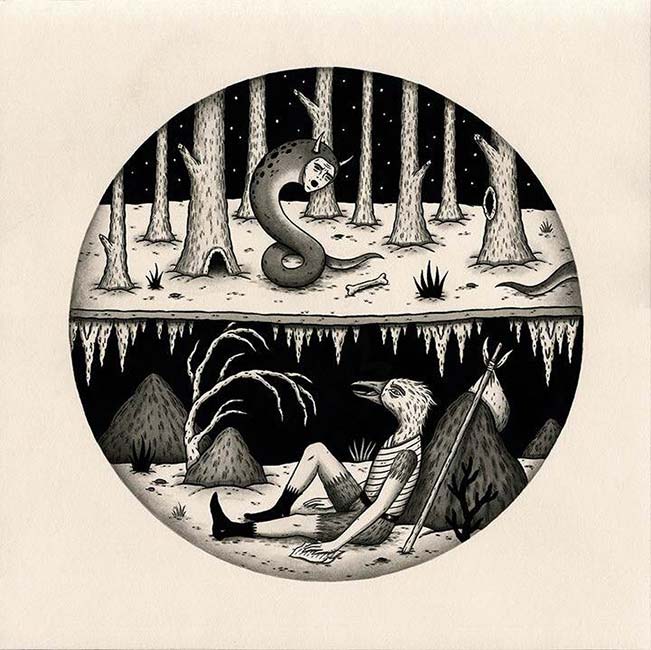 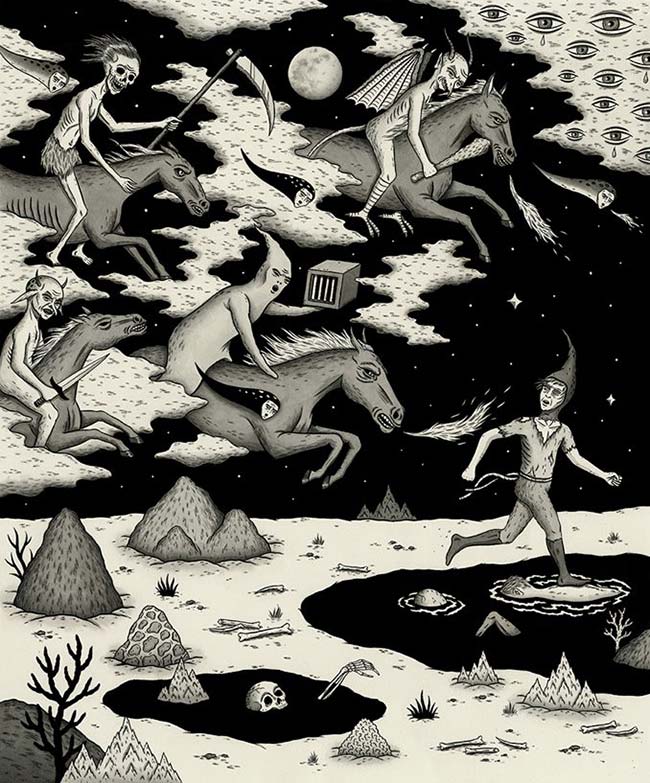 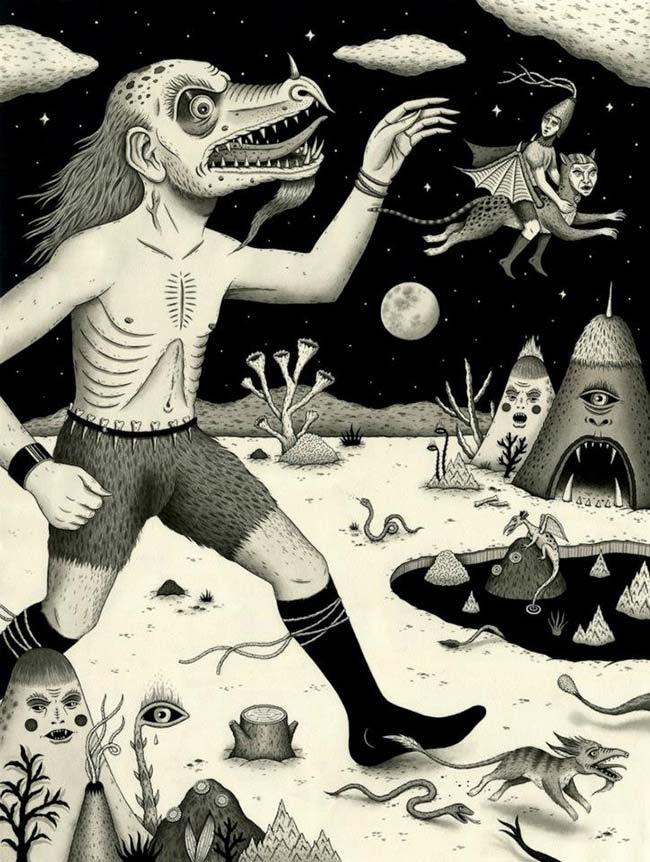 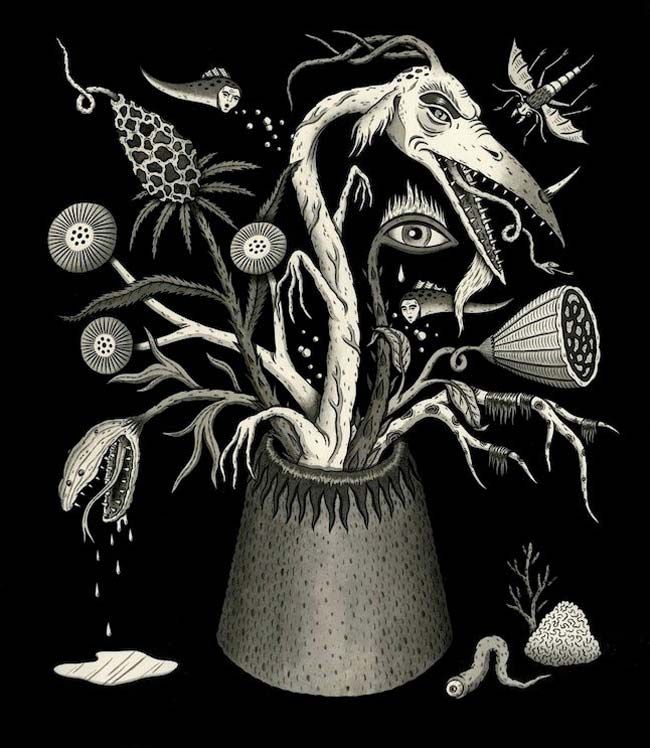 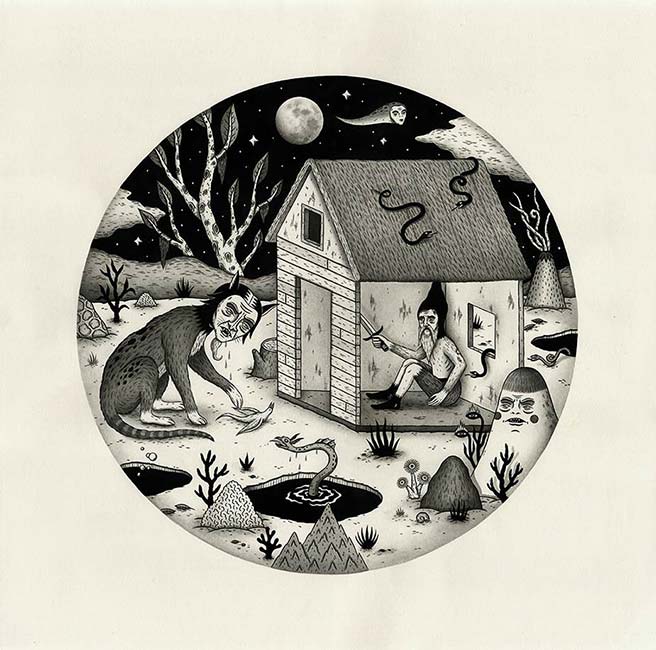