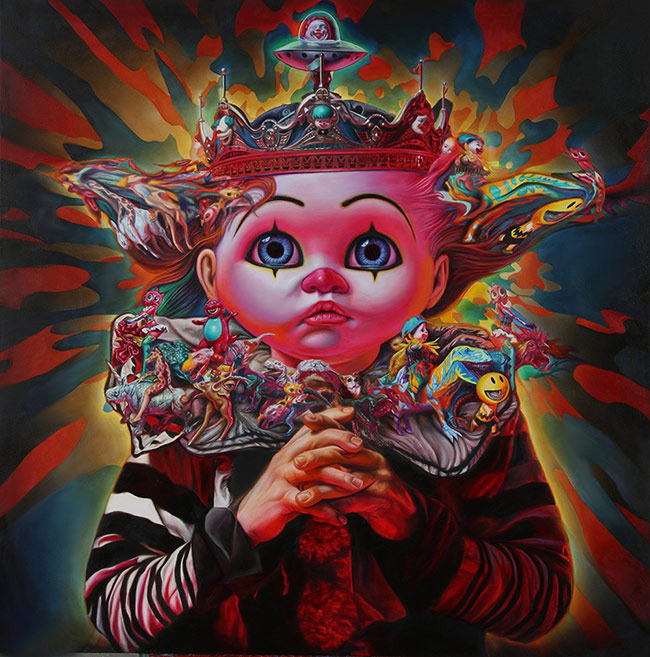 The visual imagery of pioneering Pop Art iconoclast, Mr. Ron English, is recognisable to most (whether everyone knows the artist’s name or not), such is the sagacity of the creative mind behind some of the most strikingly pervasive images of contemporary times. English skilfully combines influences from high and low culture, in what are often humorous, although always critically incisive slices of social commentary. Celebrated characters from pop culture mingle with political icons and references to art history, in a vibrantly stylised world of psychedelic realism, through which the artist explores a diverse array of universal issues. It’s an incredibly difficult task to create art that speaks to people of all ages, cultures and creeds, this however, is what Ron English does best. So, behold the wonderous sights and sounds of POPaganda!

Ron English was born in 1959 in Decatur, Illinois. He received his bachelor of Fine Arts from the University of North Texas in Denton, Texas and went on to earn his MFA from the University of Texas. In the early 80’s, English initiated and participated in illegal art campaigns which carried the intention of inspiring people to question consumer capitalism; an intention which has remained prominent throughout his career. As a fine artist, English delves under the glittering surface of popular culture to explore the darker side of mass media’s marketing, messages and influences.

WOW x WOW is absolutely thrilled to have had the opportunity to speak with Ron on the eve of the unveiling of his latest solo show at the magnificent Corey Helford Gallery. ‘TOYBOX: America in the Visuals’ explores fascinating ideas about imagination; how it is developed through play and the ways in which it contributes to forming our personal identities, and on a larger scale, our societies. Read on to learn more! 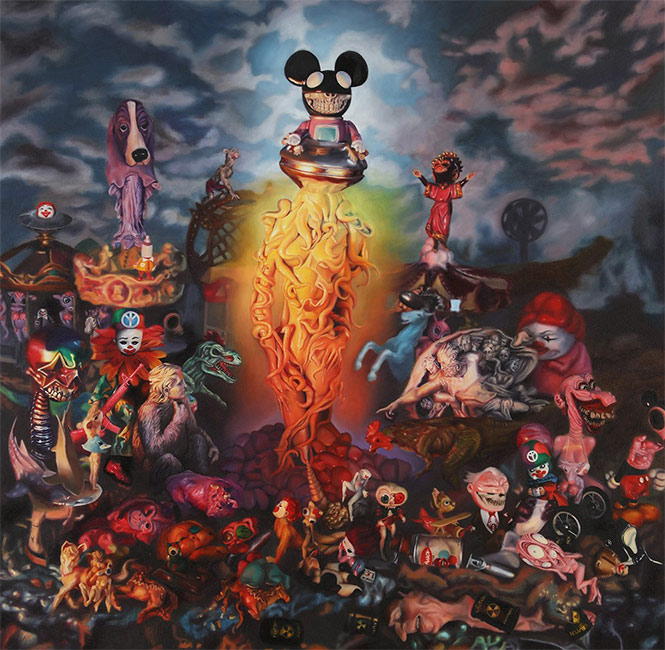 Hi Ron, thanks very much for making the time to have a chat, we really appreciate it. Let’s start off by talking about ‘TOYBOX: America in the Visuals’, your upcoming solo show at Corey Helford Gallery. We’d love to hear about the catalysts which helped you develop the show concept and how the creative process worked for you this time around?

It was my mission to create an alternative world that had its own characters that had their own politics, religions, and social hierarchy that did not directly correlate to our own world, a place where big ideas could get played out without anyone feeling offended, feeling like they or their beliefs were being ridiculed.

Talk to us about growing up in the English household. In what ways did your own childhood play and upbringing affect your relationship with the arts and the world in general?

We were isolated in a small midwestern town where you really need a strong inner life to enjoy life. 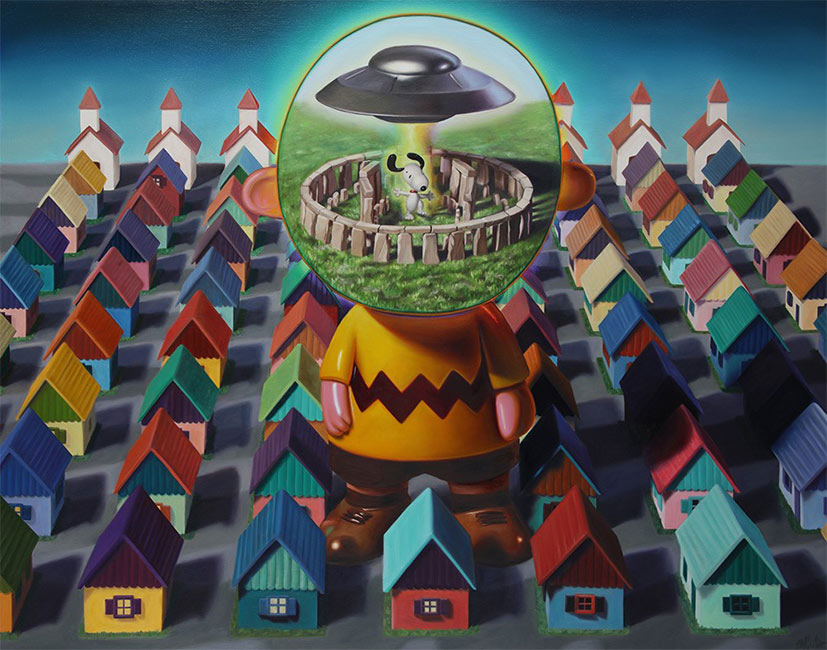 One of the many intriguing pieces from ‘TOYBOX’ is entitled ‘Close Encounter Intuition’ and features a couple of characters from pop culture who you must have a particular fondness for: Snoopy and Charlie Brown. Please tell us a little about this painting and also about your attraction to these characters and the symbolic content they afford you.

These were the characters that were the mythological figures of my generation. I most related to Charlie Brown and remember him with the same fondness I remember my actual friends. This painting represents the cookie cutter suburbia of that time, a safe and stable unpretentious paradise for a newly formed middle class that was also boring. For anyone who has been traumatized or lived through wildly uncertain times, boredom is paradise. Their children usually disagree.

As an artist known for political commentary, what are your thoughts about the current political landscape as creative inspiration? 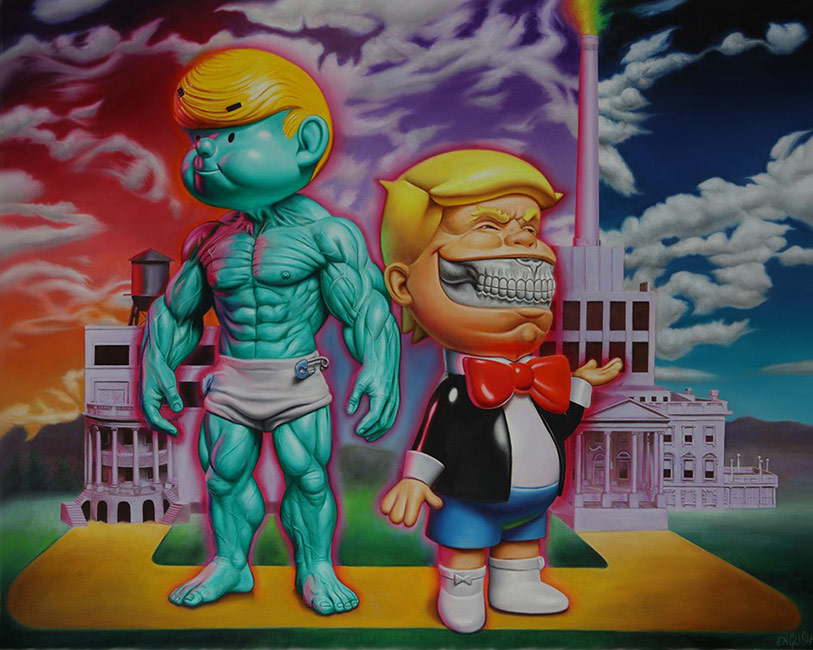 I always do best when I am forced to rethink things. I found being a social critic quite easy while creating a supportive narrative less interesting. I believed it to be more important to be for something rather than against it. I had to make major adjustments to my thought process. Also, when I wanted to create a new playground for ideas, and populate it with well-rounded actors, well that was super challenging but after I was able to do that my conceptual abilities really opened up.

What do you feel is the most dominant motivator for you to get up every day and make art? 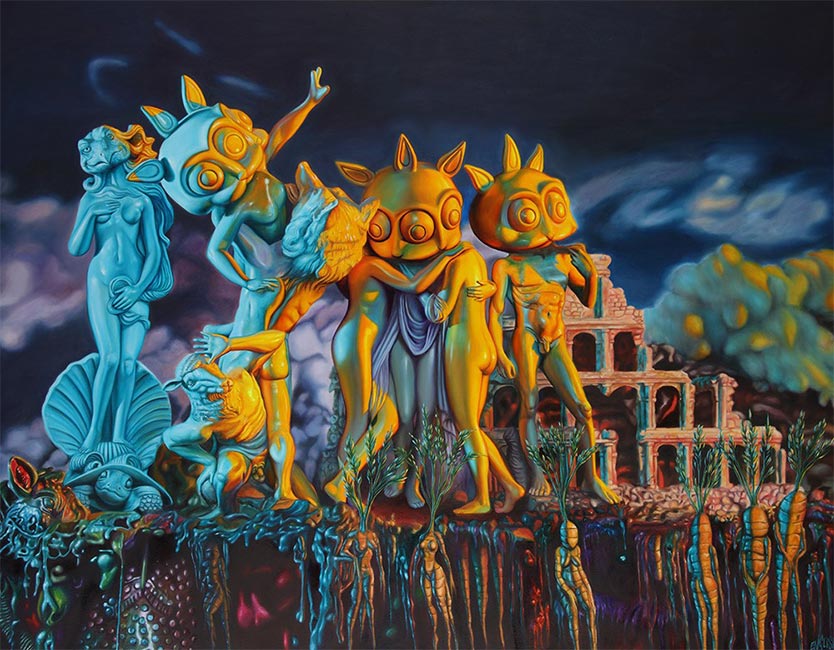 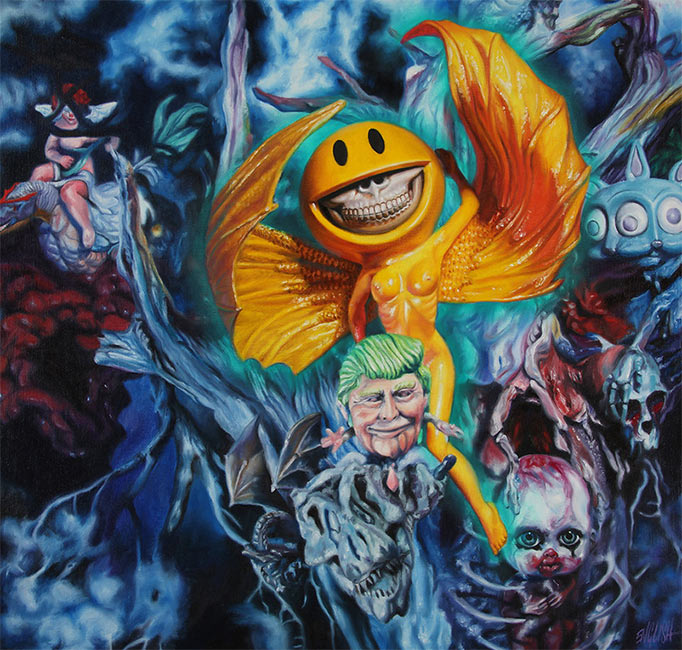 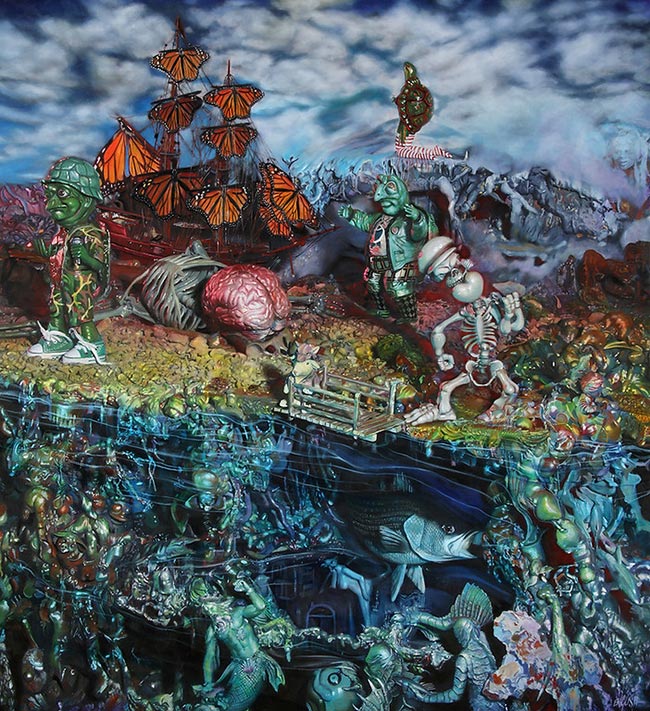 I have done well by persevering. Once I was a child boxing in my backyard with an older child and he was really getting the best of me. I was nauseous and dizzy, weak in the knees. When I felt like I could take no more I decided to take one last swing. That one dropped my opponent. I realized no matter how hard it gets you may be one punch away from a win.

A cave painting would suit me fine.

What’s next for Ron English?

In the next year I get to finish the story and start a new one. 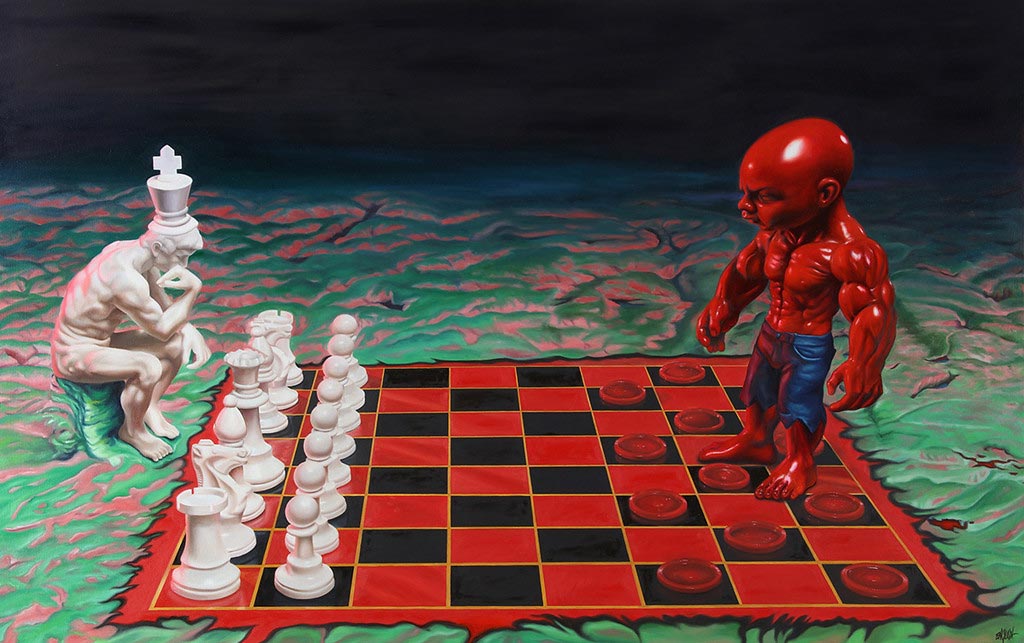 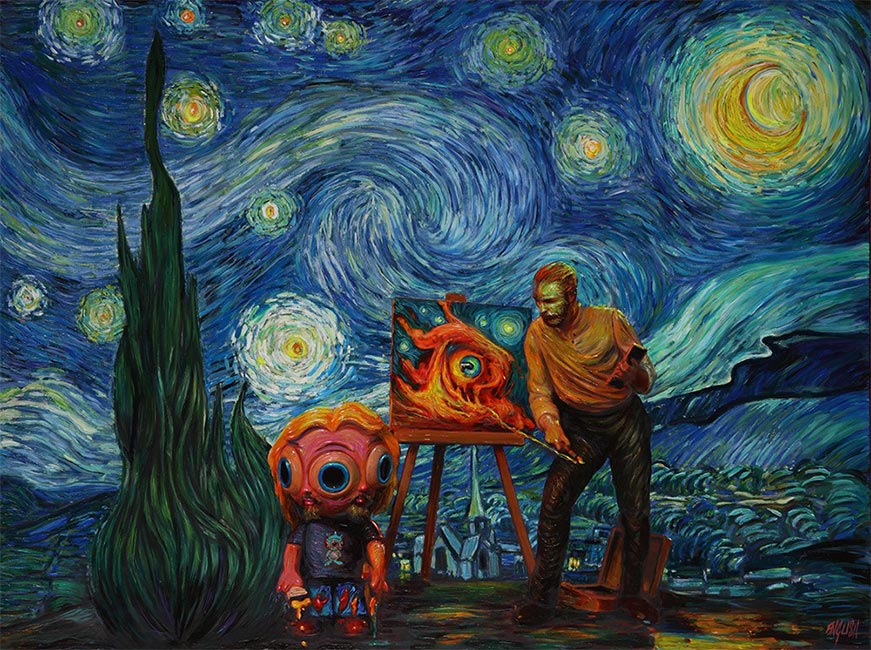 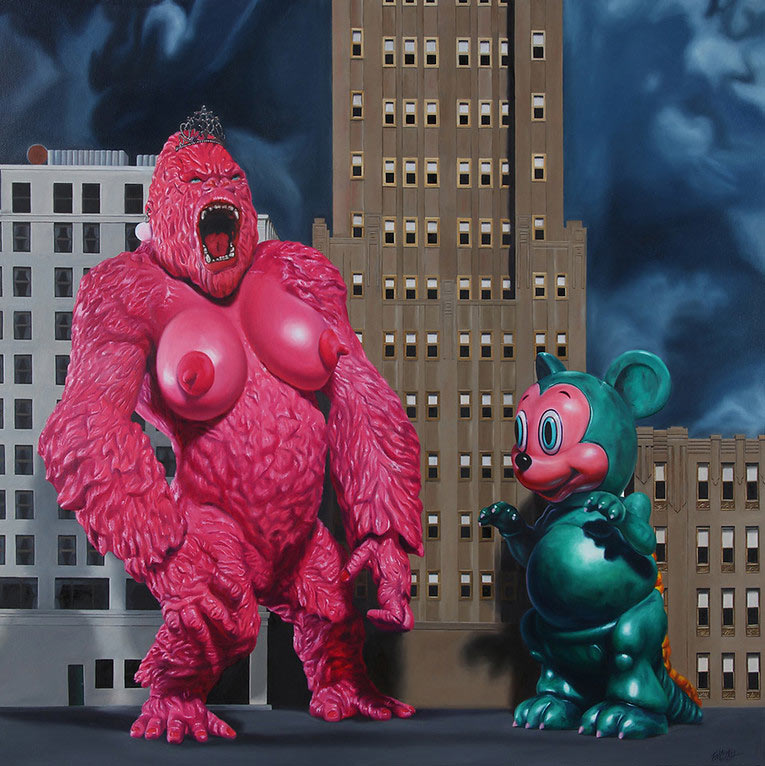 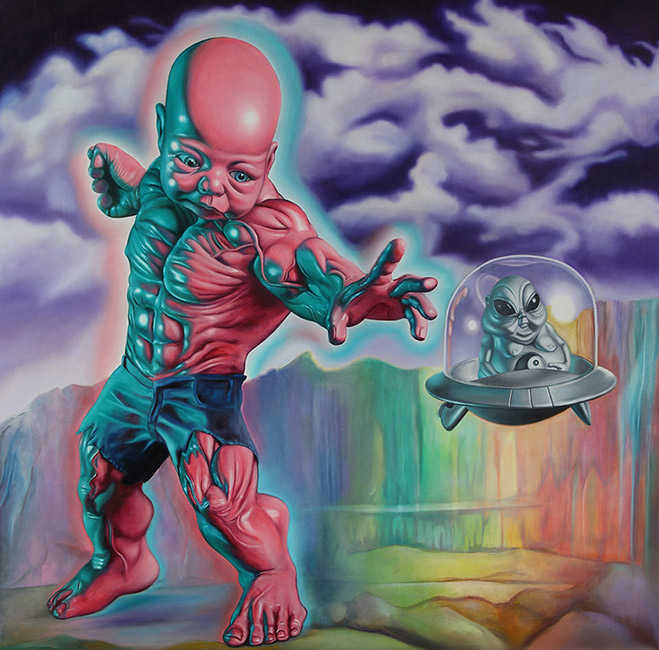 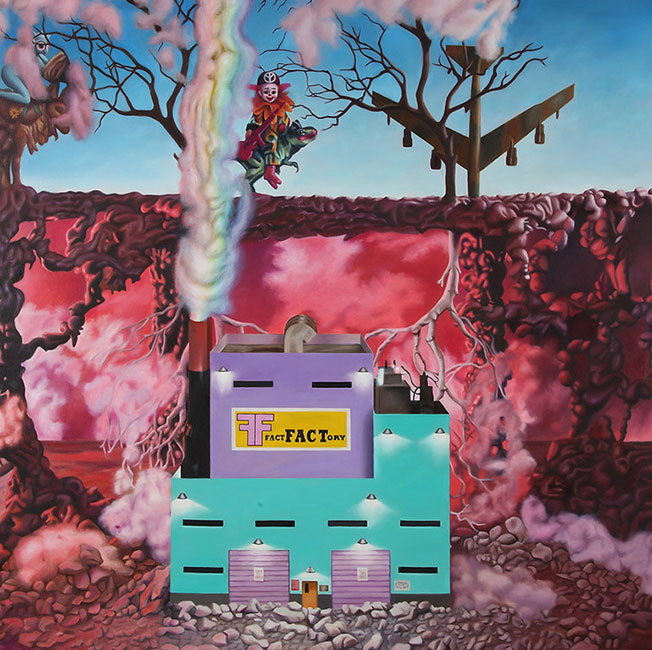 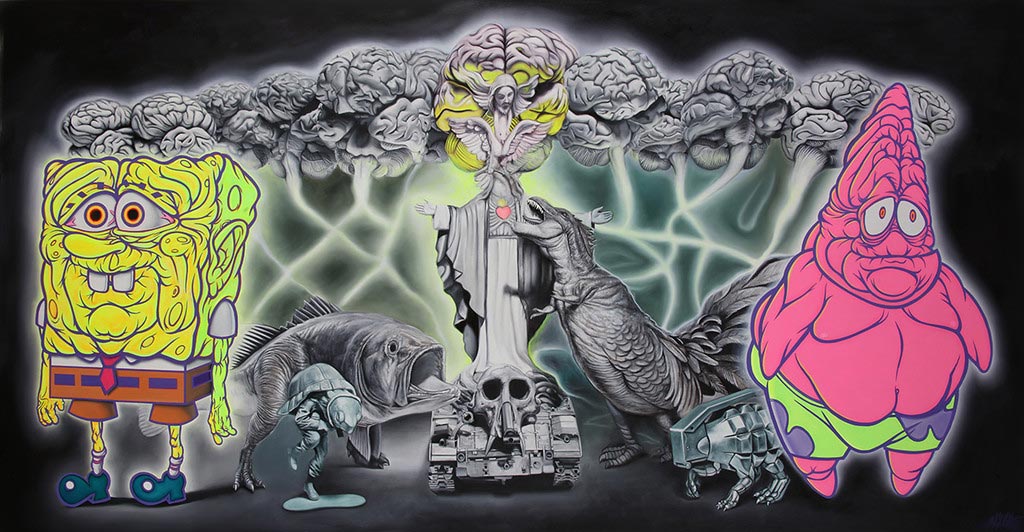 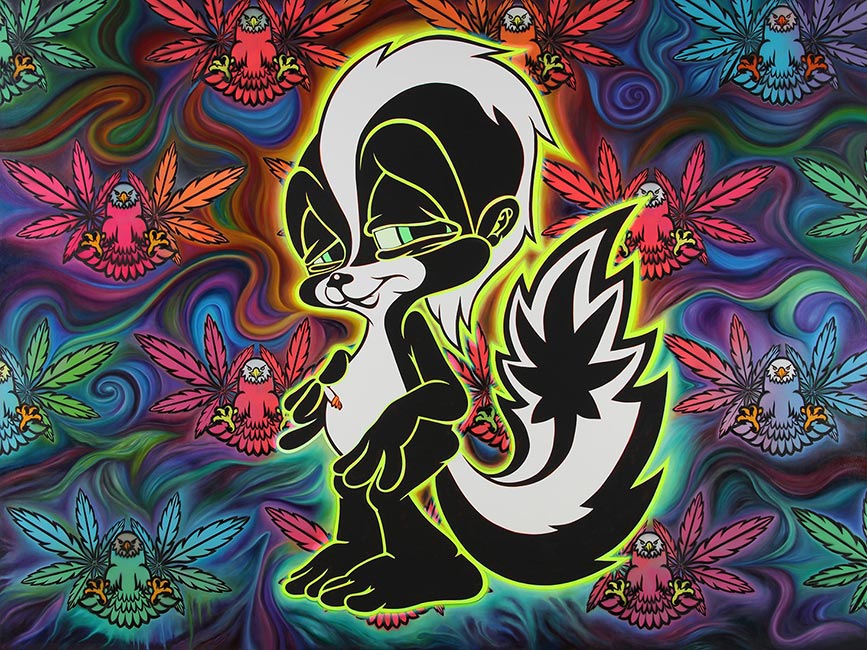 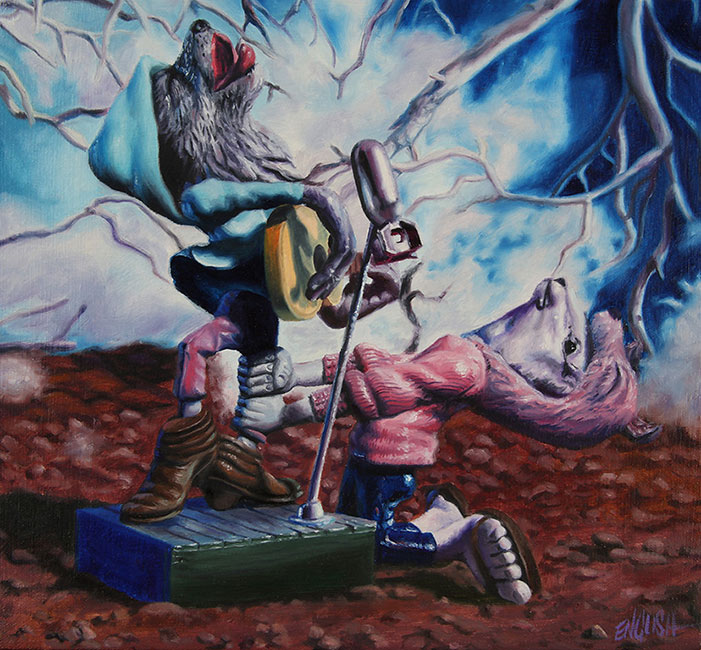 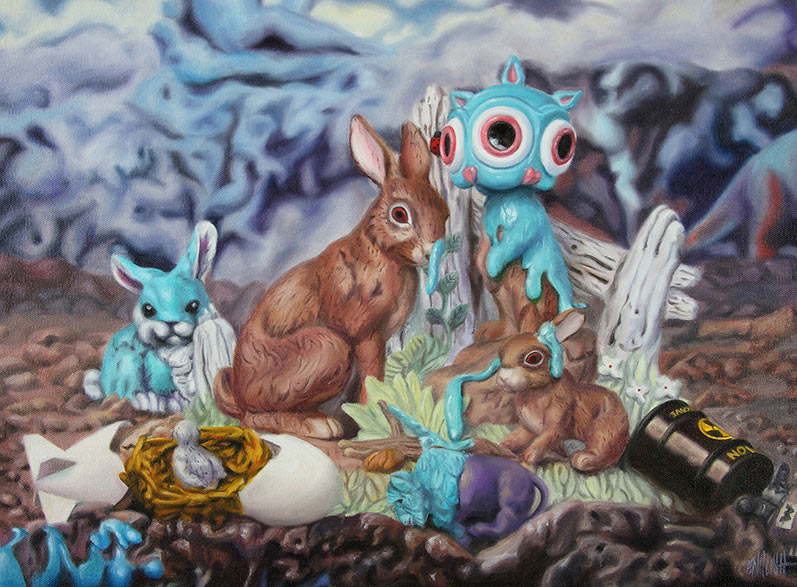 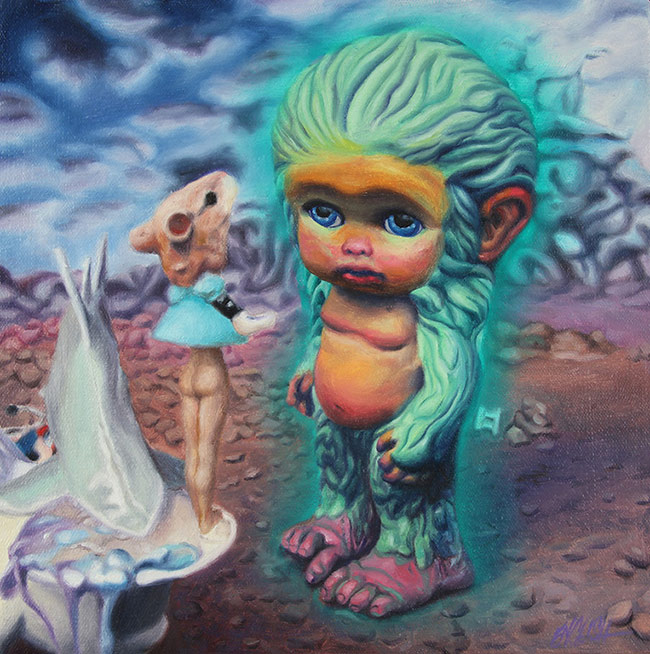 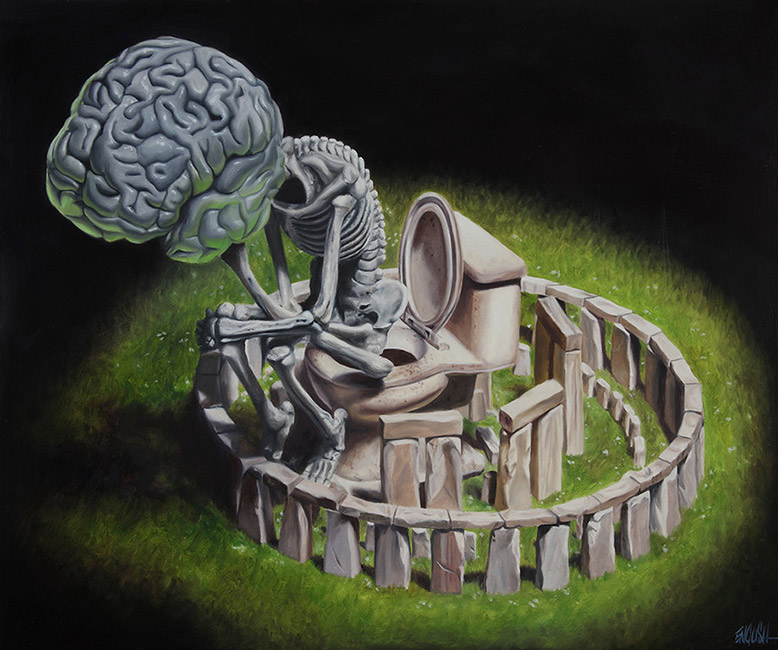 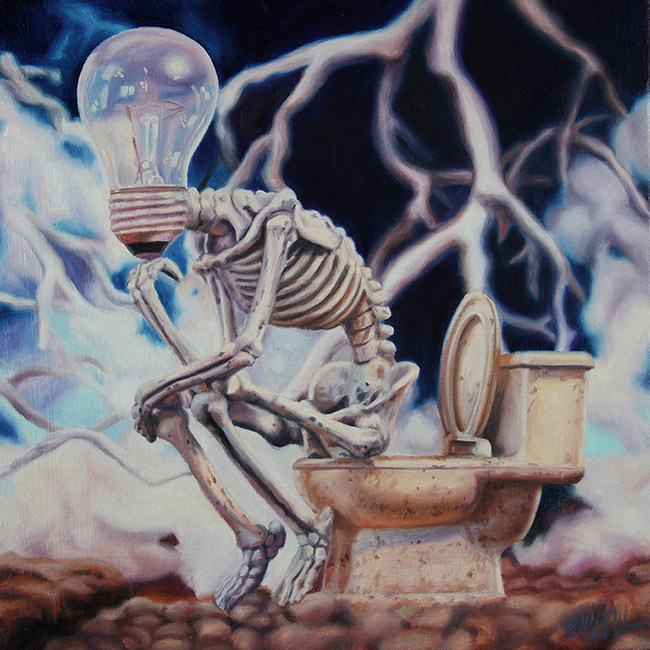 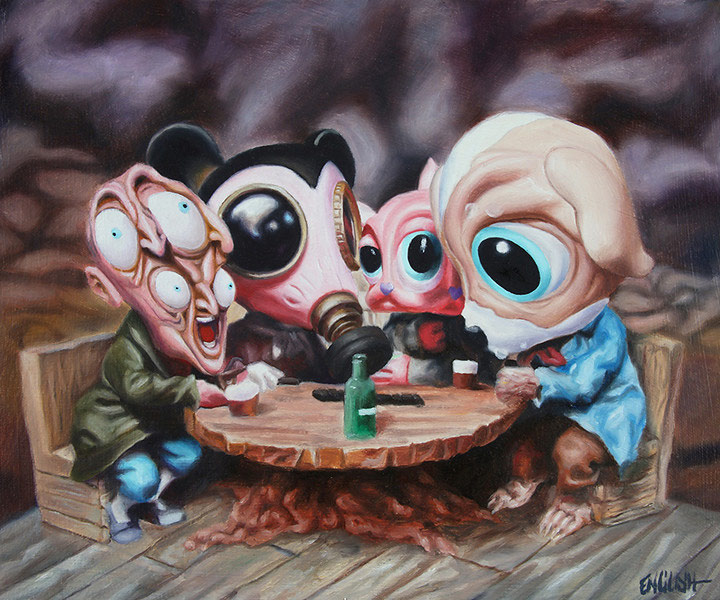