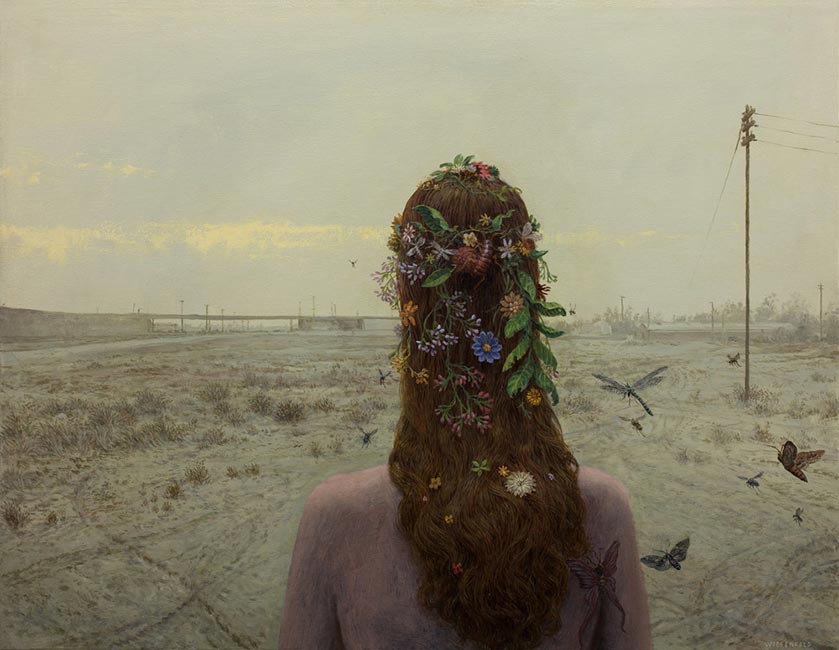 Aron Wiesenfeld (b.1972, Washington D.C.) currently lives in San Diego, California. He studied painting at Cooper Union in New York. Following a brief career illustrating comic books, he continued his studies at Art Center in Pasadena, California. His paintings have been featured in galleries and museums around the world including New York, L.A., San Francisco, Seattle, Toronto, Oslo, Aspen, Amsterdam, and Rome. His work can also be seen in the publications American Art Collector, Juxtapoz, Drawing Magazine, Hi-Fructose, Sibila, Wall Street international, The Huffington Post, and many others.

Aron’s paintings depict enigmatic figures traversing desolate environments. Both the people and the places seem familiar, yet oddly out of place. He says “They are refugees, pilgrims, and wanderers, trying to get to the other side of a river that is forever out of reach. I think they are answering a call that is not consciously understandable, but resonates somewhere inside them. It draws them to a place they forgot that they knew about, something like a return to Eden.”

The settings of the works do not seem to depict specific places, but rather more archetypal landscapes. Of this he says, “The word I use is ‘North.’ This is a place where words fail, they freeze in the throat before they can be spoken. It is still, secret, ancient, unchanging, dark (even in the day), visceral, uncultured, unenlightened, and magical. It is the place where all myth is enacted. Yet there is also the intrusion of modernity: bridges and power lines cut through the organic natural forms. Just like the character’s own natures are subjected to manufactured notions of identity, to me these landscape elements are very metaphorical of their psychological states. It is the in-between quality of the places that appeal to me, which seem appropriate settings for the subject’s personal tragedies and rites of passage to play out.”

When asked about the open ended aspect of his images, Aron answers, “ I just want to pose interesting questions. For the answers I rely on the compulsion of the mind to create dreams and fantasies, which will be as varied as the people who see them.”

“It’s wonderful to be in that state of just letting the brush paint, and being lost in the world of the painting. Starting out though I always have some idea of what I’m going to do, whether it’s a sketch or some text. I wouldn’t use the word concept, more like the suggestion of something. It needs to have emotional power for me. As I’m working on a painting, if I get into trouble I go back to that first feeling, and it guides my decisions. There are tons of surprises along the way. And then again, it’s also about recognizing and nurturing the good surprises, ultimately ending up with something richer than anything I might have conceptualized originally. That’s what happens when it goes well anyway.” – Aron Wiesenfeld (Mark Murphy Design) 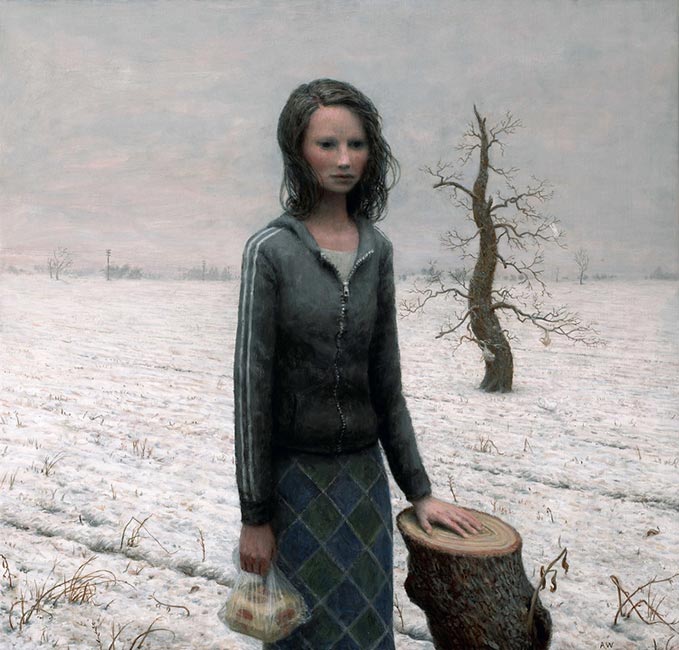 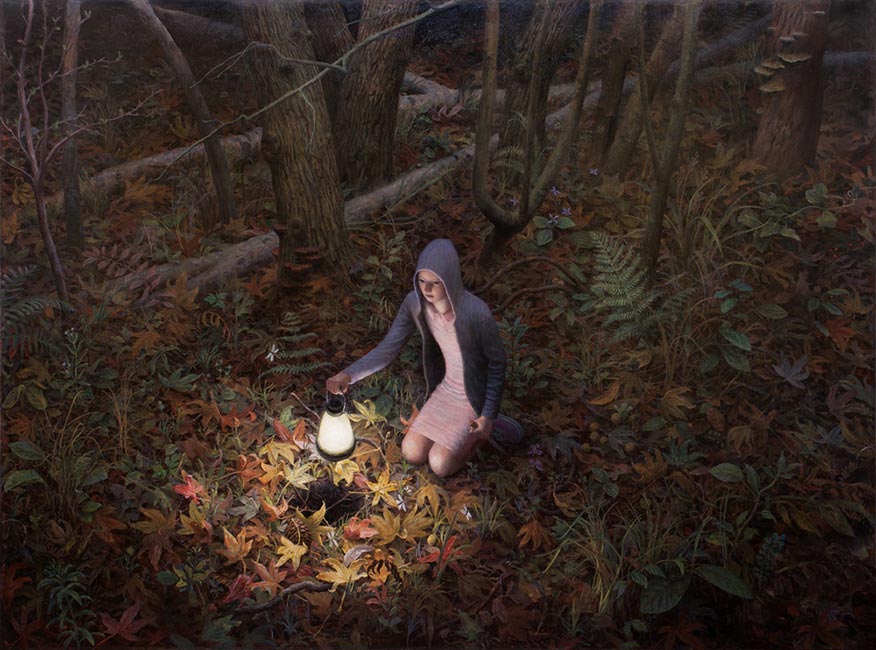 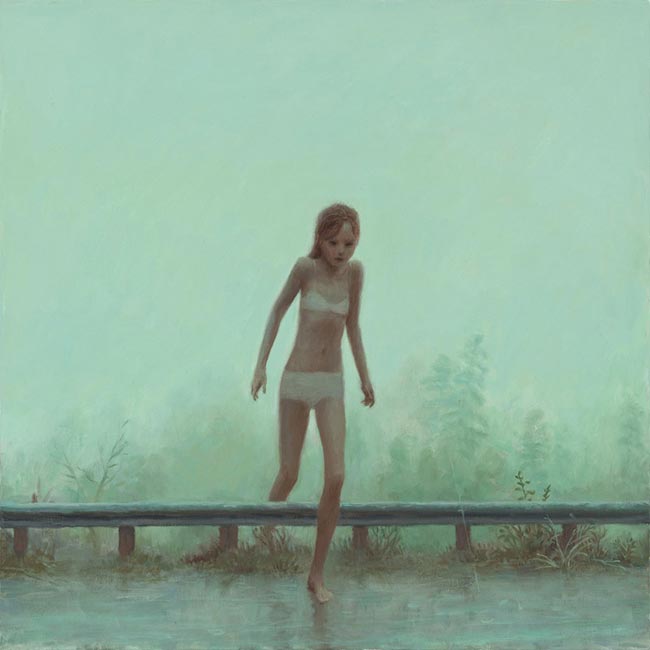 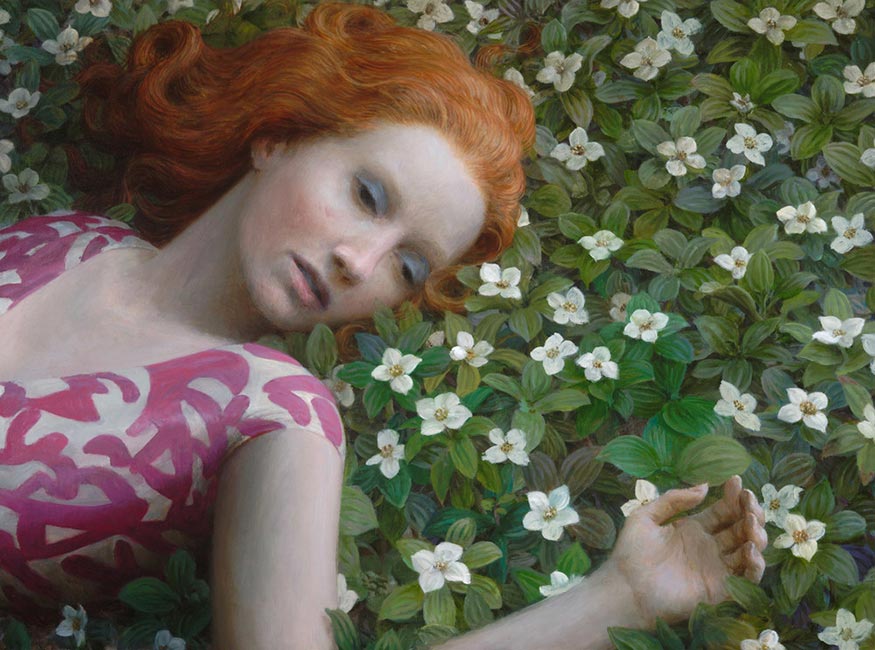 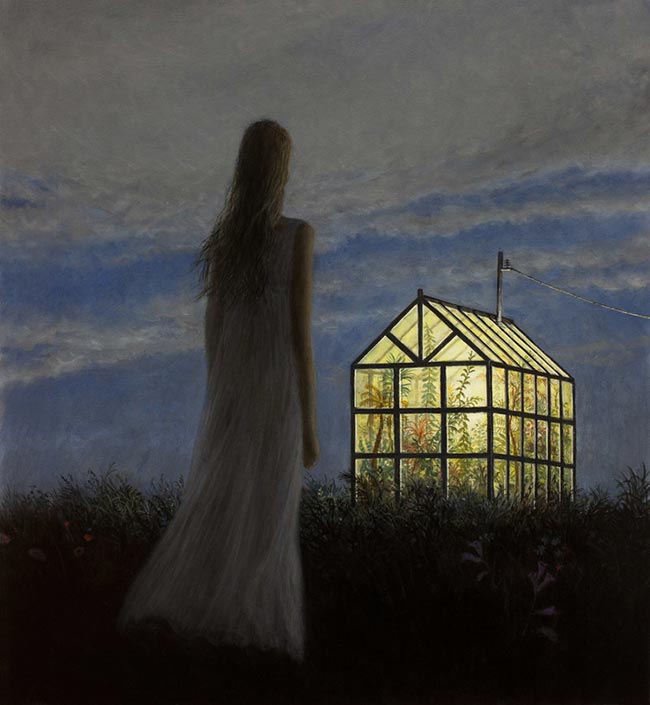 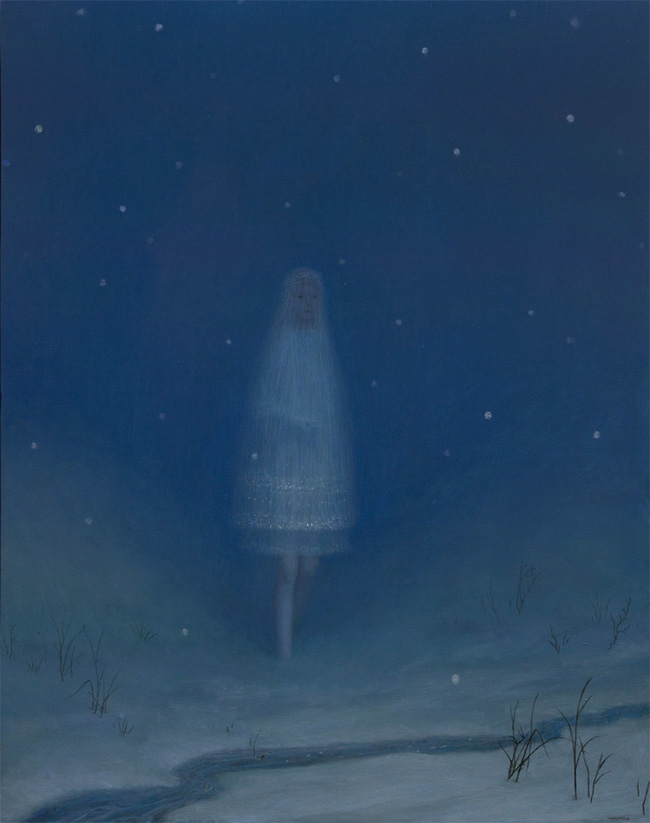 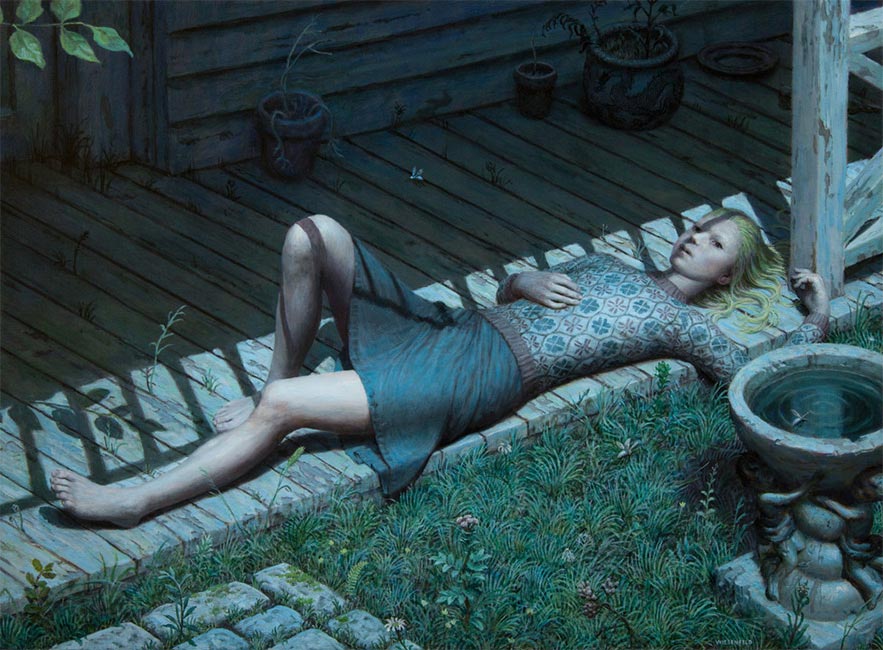 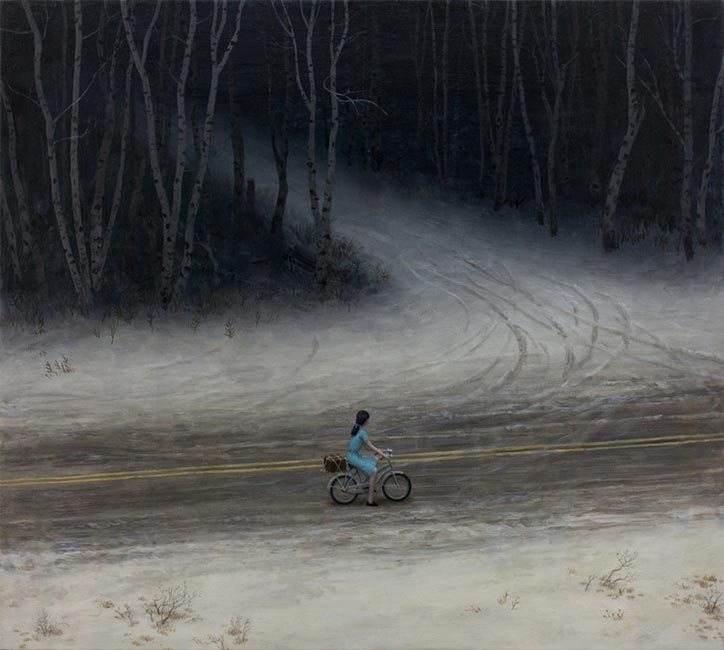 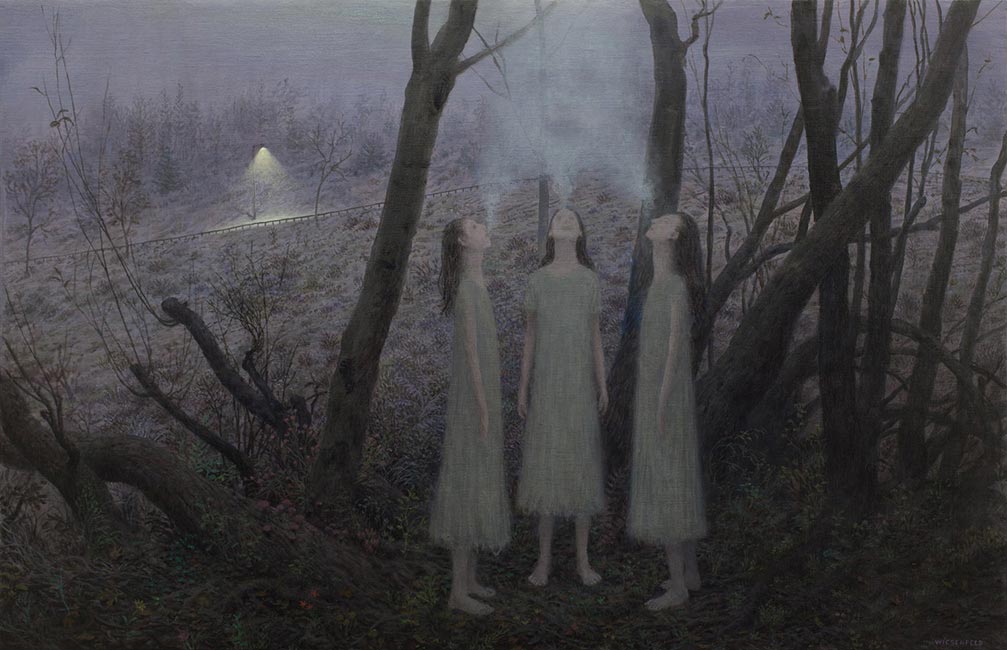 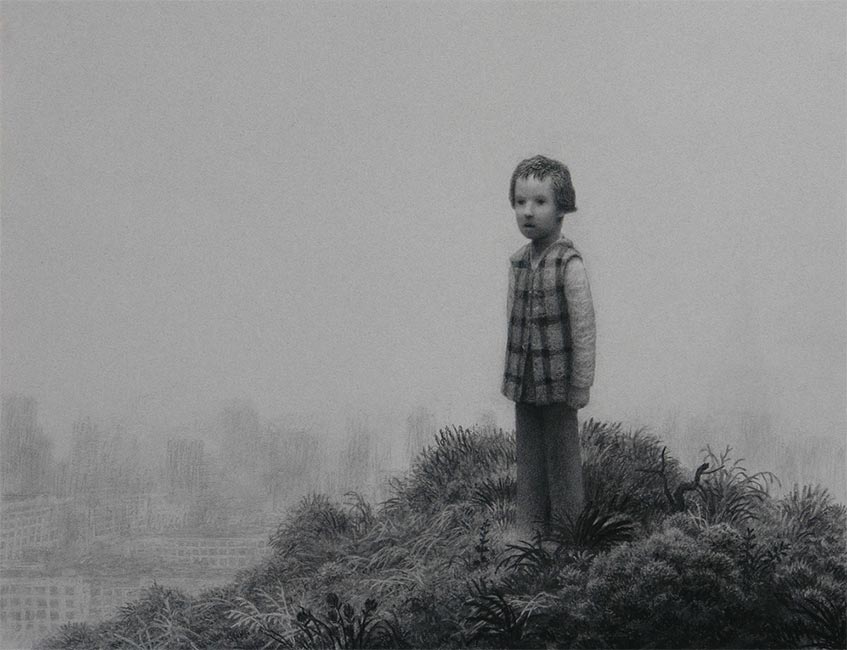