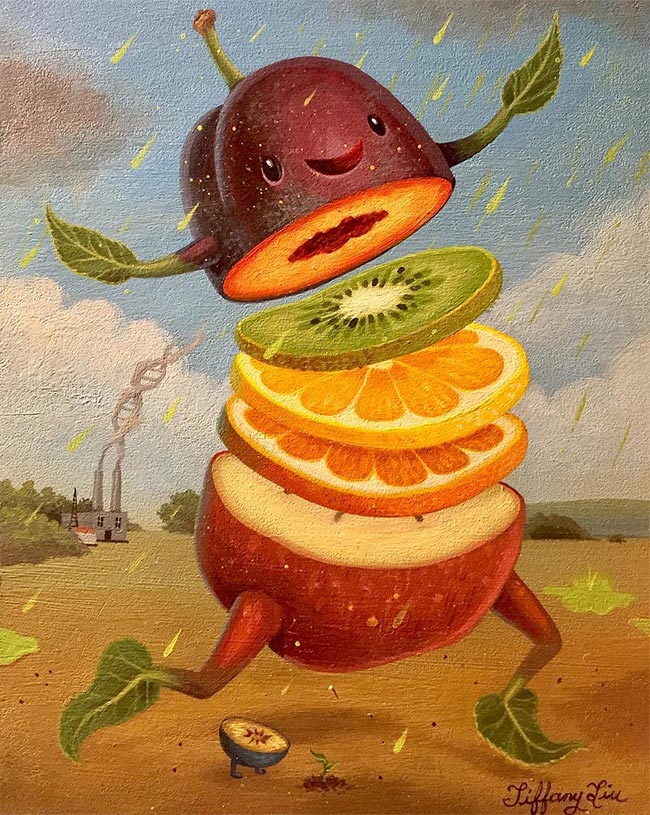 Painter Tiffany Liu has crafted a compelling and absorbing visual world – a playful and sometimes macabre phantasmagoria filtered through the eyes of an adult artist who demonstrates that her adoption of a ‘childlike’ point-of-view is never a ‘childish’ one. Liy has been surrounded by art since she was old enough to walk. Both of her parents are artists, and she recalls that much of her youth was spent staring at paintings in the family-owned art gallery/studio as she learned to draw. At the age of six, her options for a future career had already been narrowed down to three choices: an artist, a singer or an astronaut. In the end, Liu opted for art.

A confessed exemplar of the Peter Pan Syndrome, and happily ensconced in a personal ‘Never-Neverland’, Liu has never lost her childlike spirit. The artist estimates the approximately 50% of her waking existence has been spent in ‘one big daydream’. Liu’s work reflects the visions and fantasies of her imagination. Her canvas is her playground. A wash in rainbow hues and populated with the veritable circus of cute (and freaky) creatures, her candy-colored acrylic paintings are at once strangely familiar (they reference the visual style of vintage storybooks, board game graphics, and nursery decor), and oddly jarring in their often audacious and mysterious subject matter. Liu’s are booby-trapped images wherein things are seldom as they seem, and there are often disturbing – and disturbingly humorous – complexities lying just below their colorful surfaces.

Yet, the apparent disconnect between visual style and subject matter finds synthesis in Liu’s assured and masterful rendering of her strange little world. Liy employs a Baskin-Robbins pallet, and paints in broad flat planes of color juxtaposed with skillfully modeled forms. Liu’s paintings are distinguished by their integrity of design, and mastery of technique, and these qualities add a transcendent aura to ther themes and subjects which, in the hands of a lesser artist, might seem crude or vulgar. When you look at one of Liu’s works, you’re instantly seduced by the impeccable surface, and totally taken in by her pop-referenced nostalgia. Only after you note the details of her strikingly personal iconography do you sense the subversion of the surface, and the very true and personal experiences and feelings they might reflect.

Tiffany has been teaching art fo small children for over seven years. These youngsters have given her great insight to the narrative themes of her paintings. Her Fine art and Pop influences include Surrealism, Gothic Art, Folk Art, and vintage Little Golden Books, but she feels her greatest inspiration comes from her students. “A child’s perception of the world is a great thing,” says Liu. “When they draw they interact within their drawings like an organic, growing story. They follow their gut instincts, with a no-holds-barred uninhibited approach to art-making.” She continues, “They sometimes don’t even consider their work ‘art;’ for them, it’s a lot more like playtime. I am fascinated by their development; not only on an aesthetic level, but also on a subconsious psychological level. When they draw it’s this big rainstorm of thoughts, emotions, and ideas. They are my little heroes.”

Telling stories and creating worlds where anything and everything can happen is Liu’s forte. She loves playing with ambiguities and contradictions. She is adept at tackling hings that she fears and rendering them affable and accessible; creating characters that speak to her, and making art that allows viewers to feel as though they have stepped into her dream world. Yet, there is often troubling complexity in Liu’s lollypop world. Often recalled as idyllic, Liu’s vision of childhood reflects a reality in which things often go awry – but in the most playful and colorful way. If some works hint at sexual awakening tinged with corruption and consumption, others treat themes of a search for love with sweet subtlety, humor and mystery. Liu’s non-stop visual invention and the fecundity of her imagination are staggering. She fills her paintings with visual puns, and even double-puns. the amazing, floating, colorful artistic world of Tiffany Liu is one you’ll want to visit again and again.

“I am greatly influenced by Alice in Wonderland. I think the core idea of the story, rather than any specific scene was my biggest influence. For me, the idea was just that there was this girl that had a second life and a second chance to interpret her reality for whatever rules or lack of them there were. I have always been a big dreamer. Even before I knew of Alice and Wonderland my head was in the clouds day dreaming and night dreaming of places, stories and creatures I’d meet and have adventures with. So meeting Alice for the first time in story books was like meeting another me. As I progressed as an artist, I tried many things, but the one thing that stuck out, that really felt like me, was being able to create with the freedom that I have through the voice of a child. Children are probably some of the most imaginative beings on earth. I would be honored to look through any child’s eyes and see what they see. It must be an amazing experience to be able to be the first to define what a thing is before the thing is given a name or definition by another.” – Tiffany Liu (Platinum Cheese) 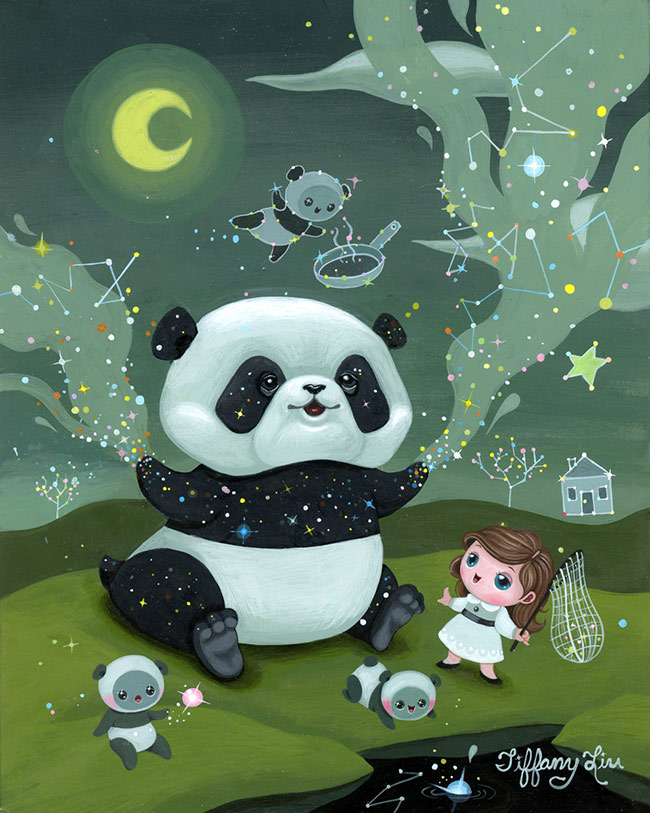 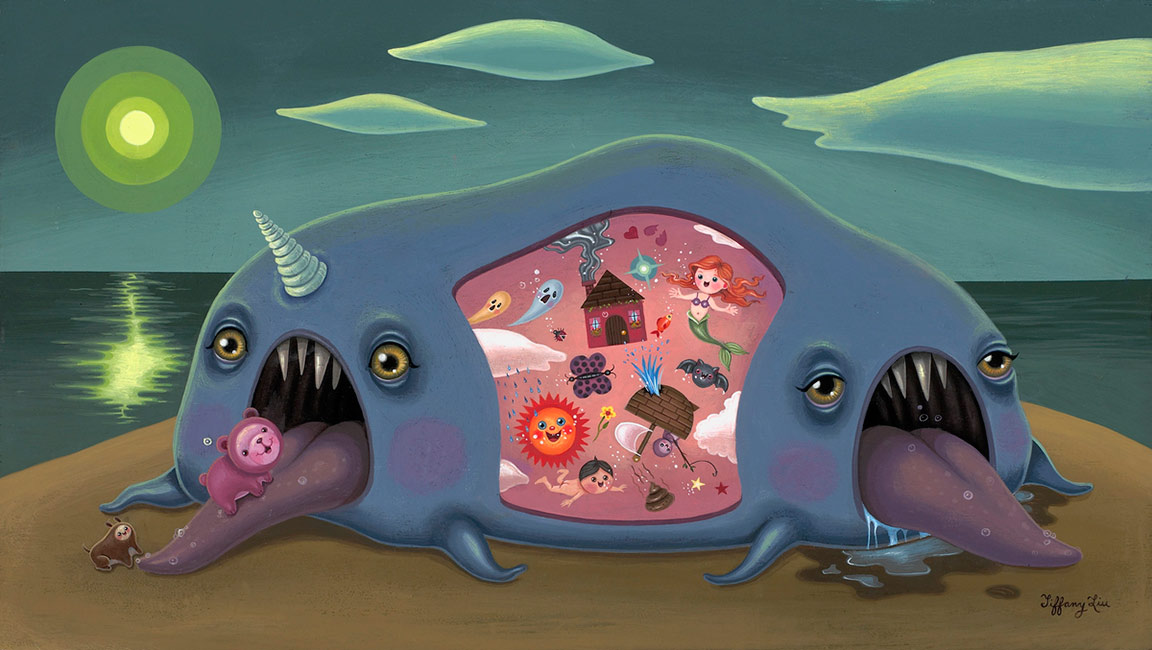 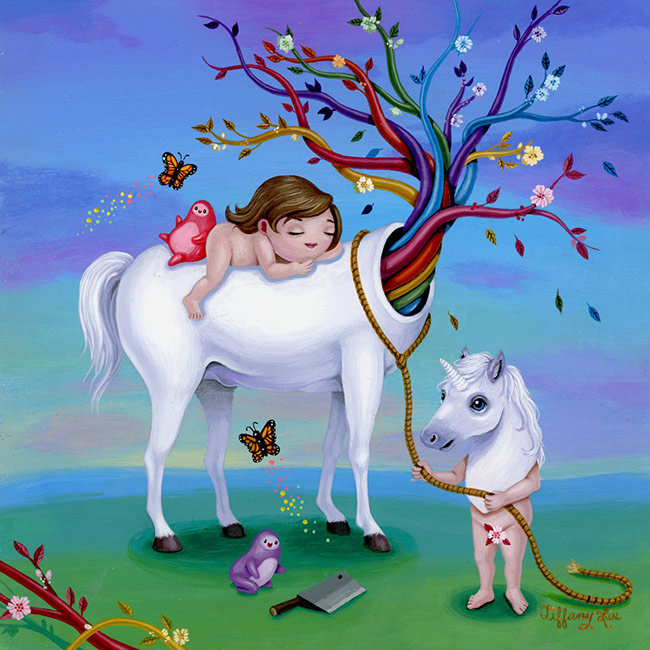 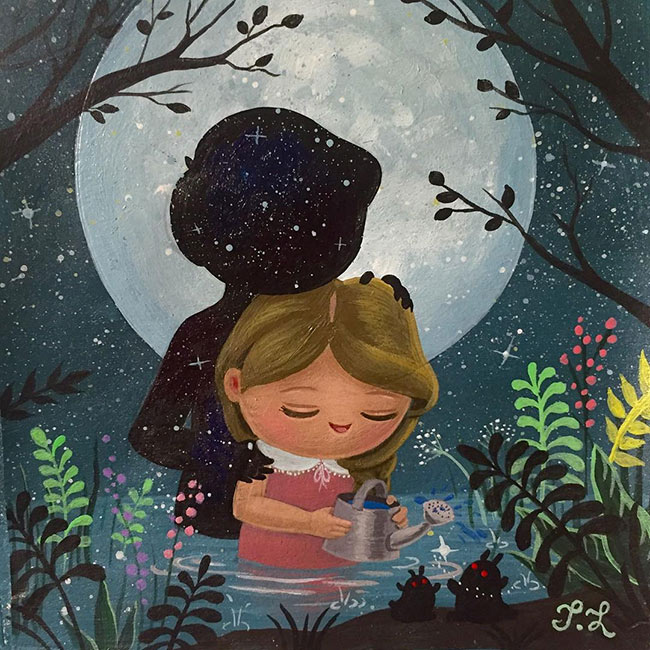 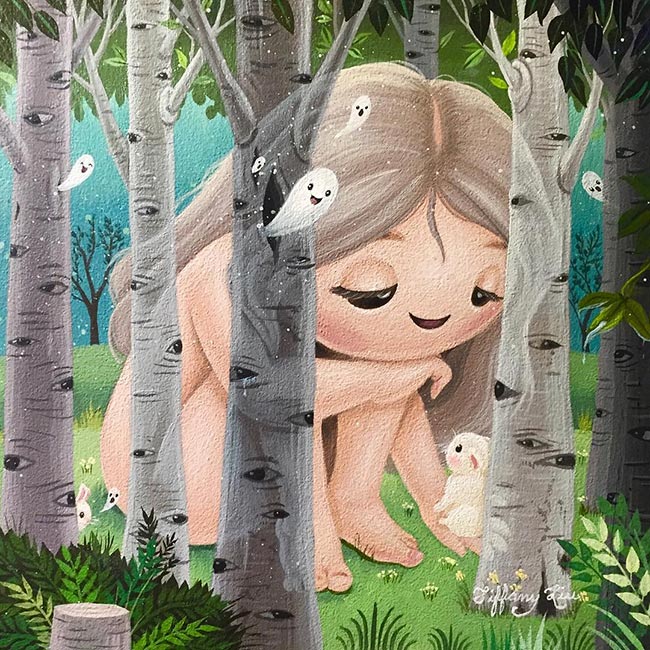 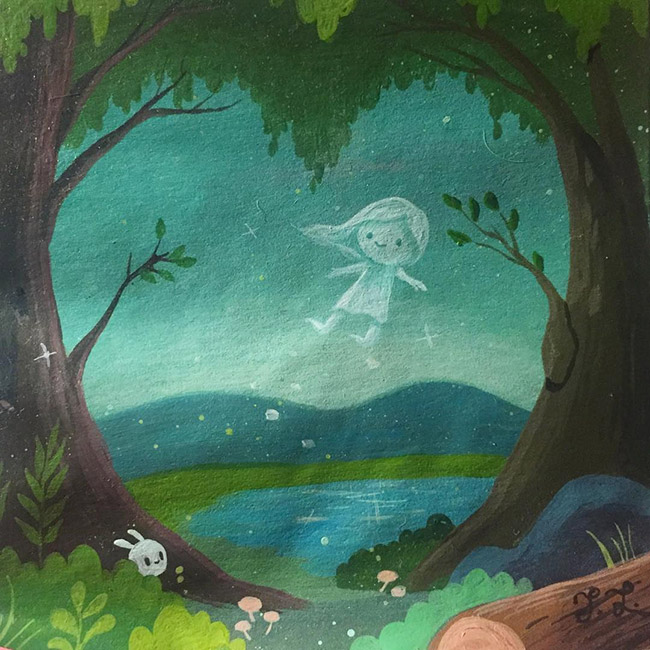 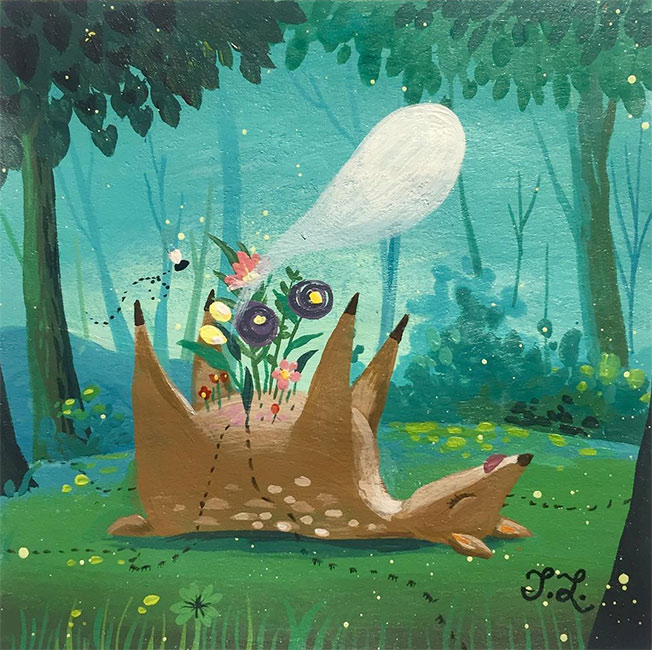 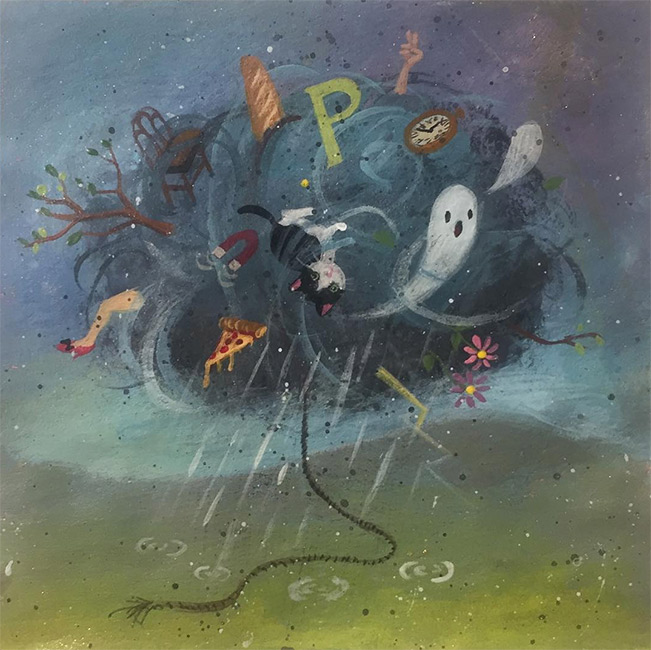 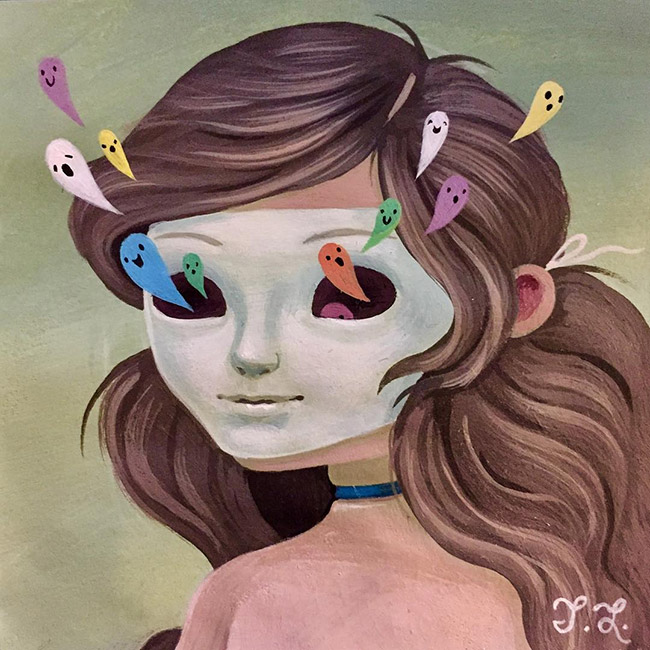 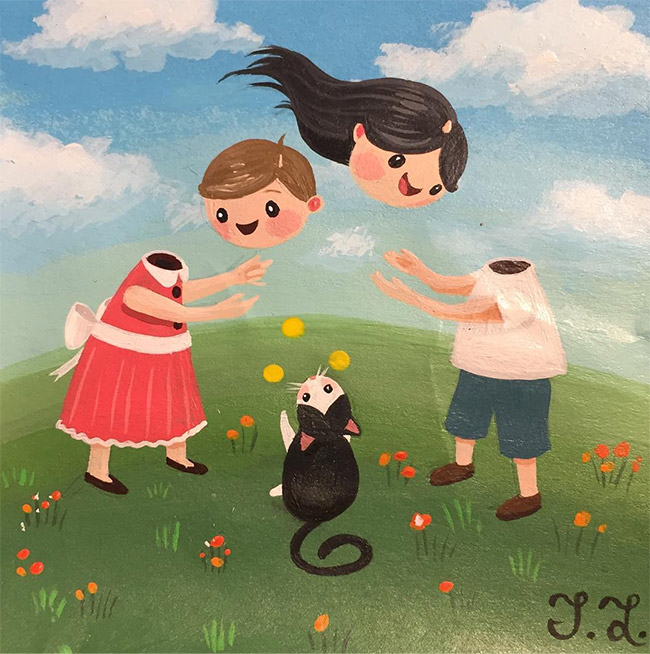 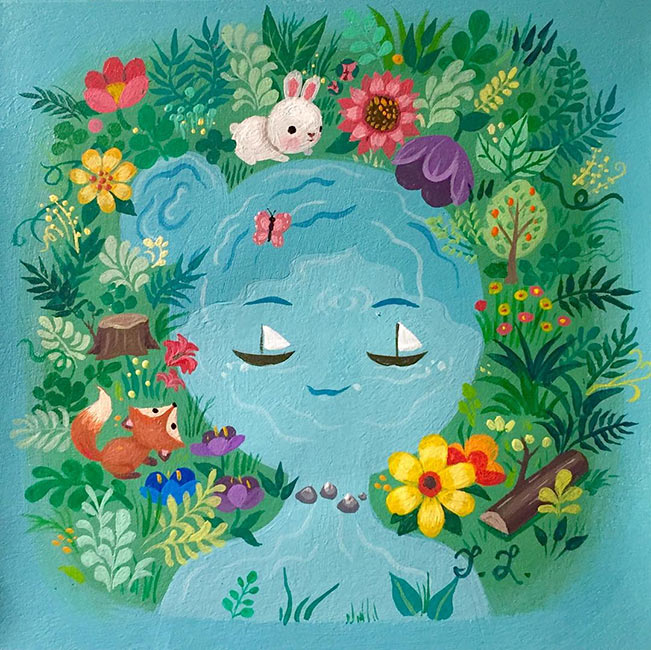 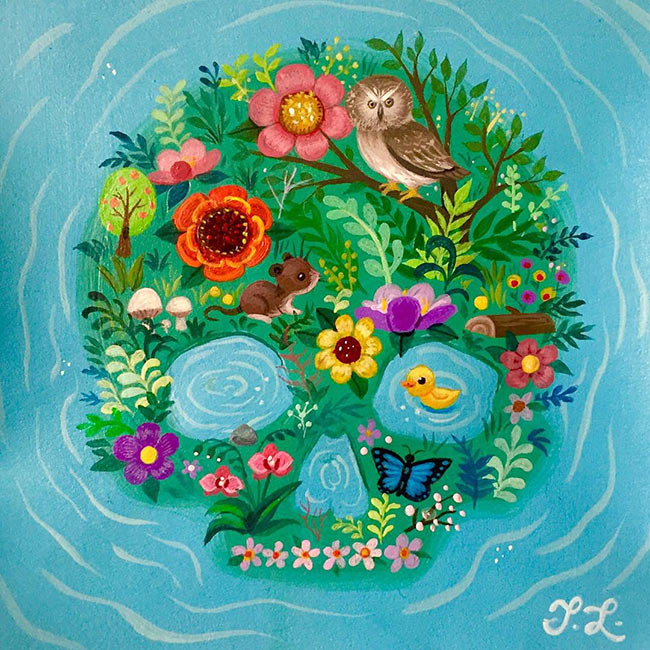 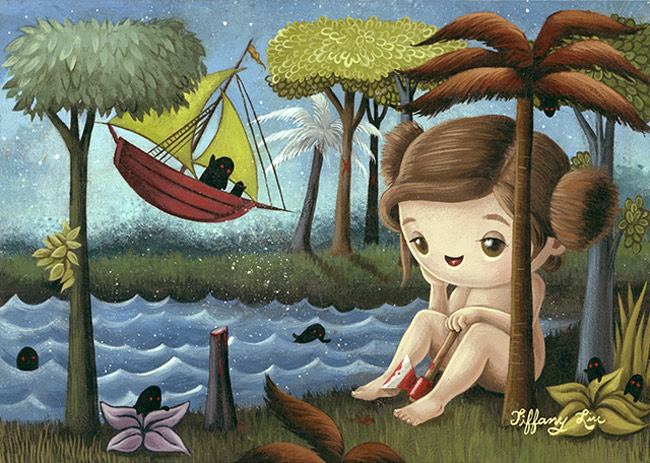