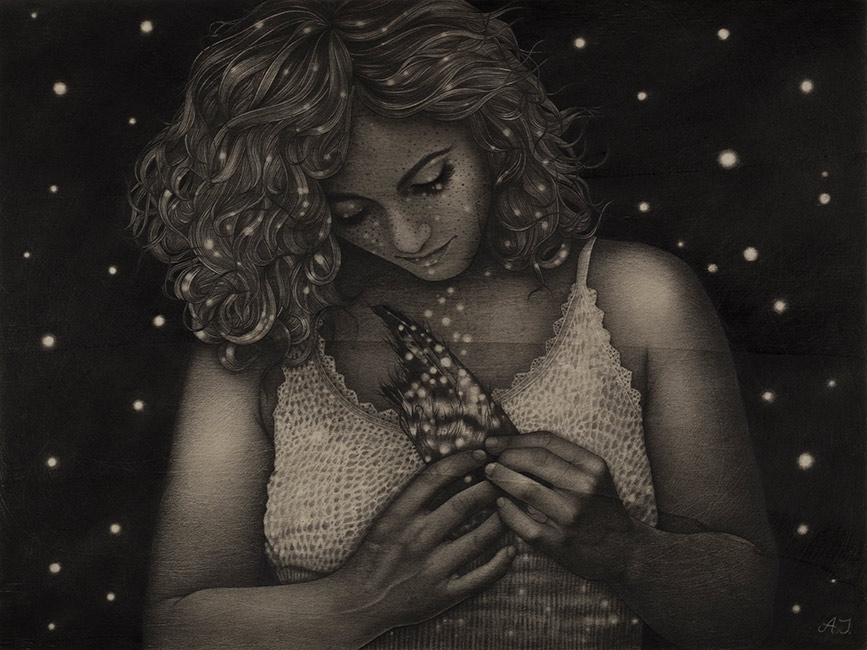 ‘Aurora Consurgens’ comes from the Latin and translates in English as ‘Rising Dawn’. It is a title usually given to alchemic essays, such as the manuscript attributed to Tommaso d’Acquino, which focuses on the philosopher’s stone. Moreover, the phrase ‘Aurora Consurgens’ refers to a mystic teaching in the ancient schools, where students, with the coming of the dawn, should be able to keep the reminiscence of their nocturnal conscience. I chose this title for my show because I thought it could define, more than any other, the sequence of my works, which are nothing if not memories, fragments of a journey in the unknown made of ineffable visions. These run after each other to reach the ultimate purpose, the discovery of Aurora. With it, everything is clear and infinite, but nothing can ever be the same again. 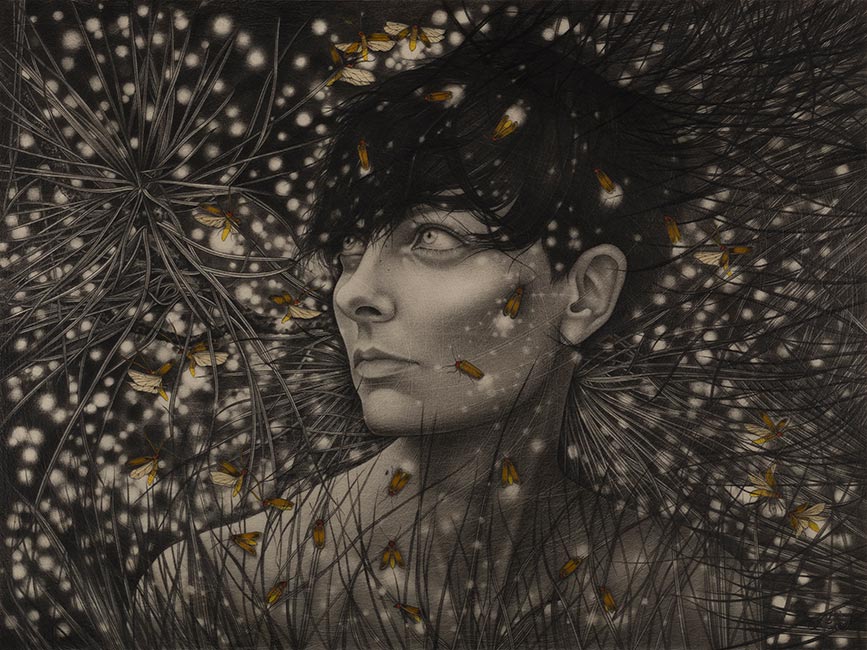 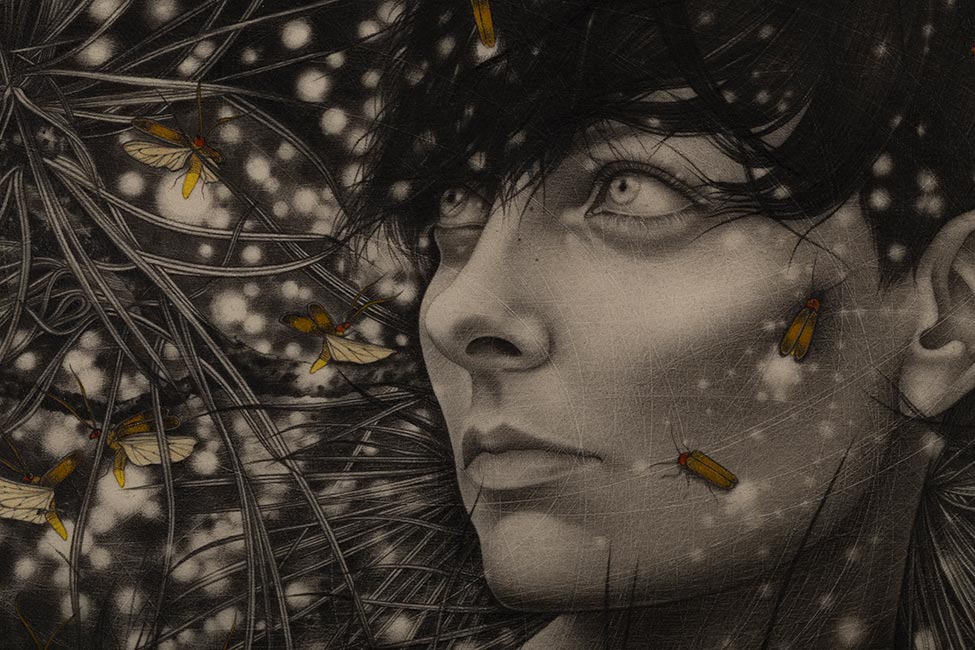 The passage from darkness to light, main theme of the exhibition, recalls various concepts of ancient origins, such as that of ‘Catabasis’ and ‘Anabasis’, a human’s descent in the hell and his subsequent rise, toward the light. The “Eleusinian Mysteries”, propose the same theme. These religious rituals were celebrated every year in the sanctuary of Demetra in the ancient Greek city of Eleusi. The mysteries were born from the myth of Proserpina’s rape by Ade, the underworld’s king. The story talks about a three phase’s cycle, made of a descent, a research and the final rise, which was interpreted as an initiation ritual. During the process the initiate, was blindfolded and guided in a dark cave, where thanks to hard practices and an inebriating drink, he could reach a state of deep hallucination. This was associated to the unknown condition of life after death. The symbolic death was essential to start a spiritual life, since it made the individual ready for a superior rebirth of his way of being and knowing. The descent in the dark stands for the descent in the human unconscious. Only if we penetrate the darkest parts of our soul we can understand our actions and mistakes, in order to overcome them and find a rebirth. 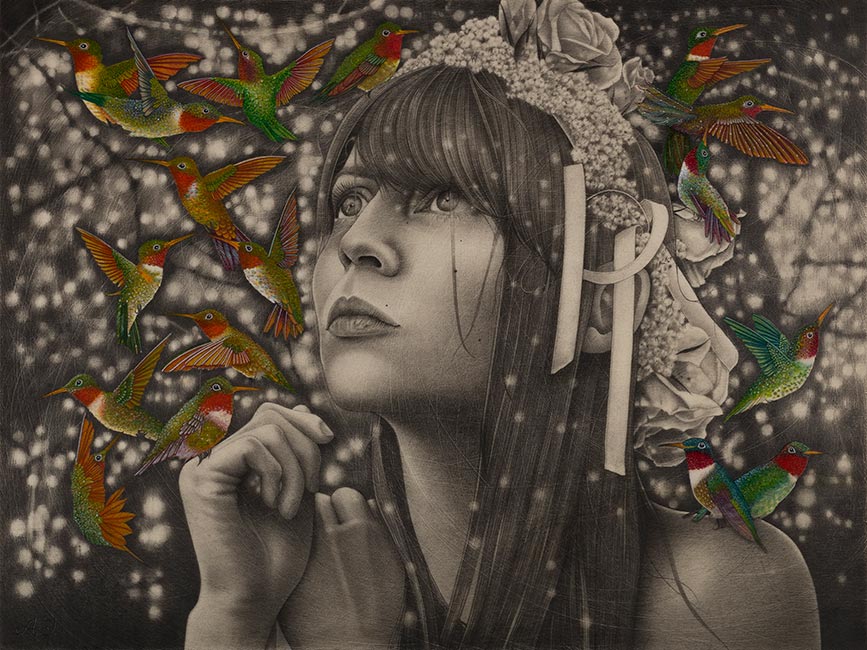 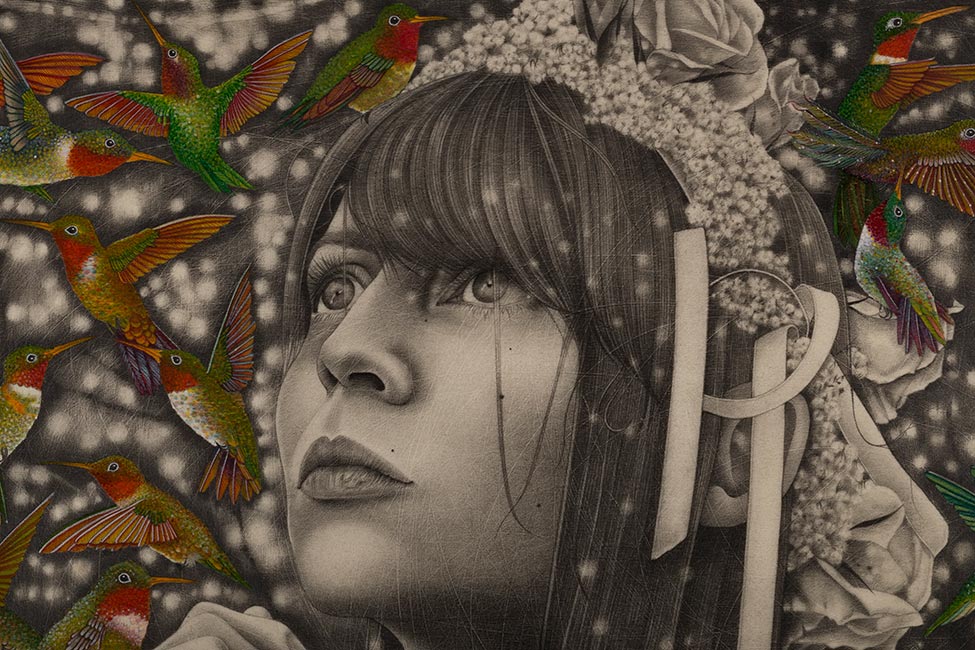 The same concept can be found in the Siberian, Celtic and Native American Shamanism. Through the concept of ‘Axis Mundi’, the connection between sky, earth and what is underneath it, through the cosmic tree, which links the superior world with the middle world and the hell. In the Viking mythology, this tree was called ‘Yggdrasill’ and connected the nine worlds of the underground. From the alchemy, we know the concept of ‘Vitriolum’, a trip in the earth’s bowels in search of the ‘occult stone, the real medicine’. This is another invitation to explore the unconscious in order to know better its intimate parts. 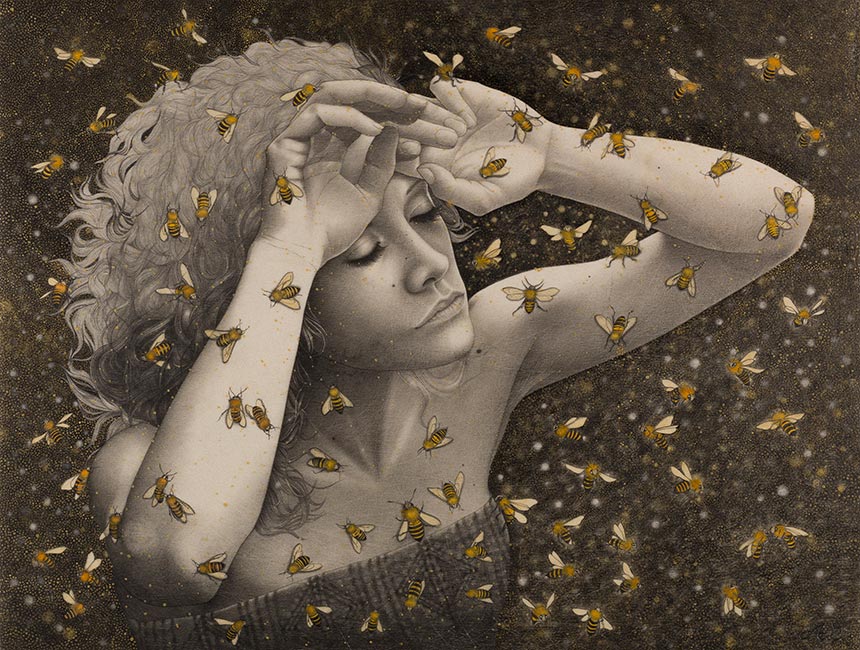 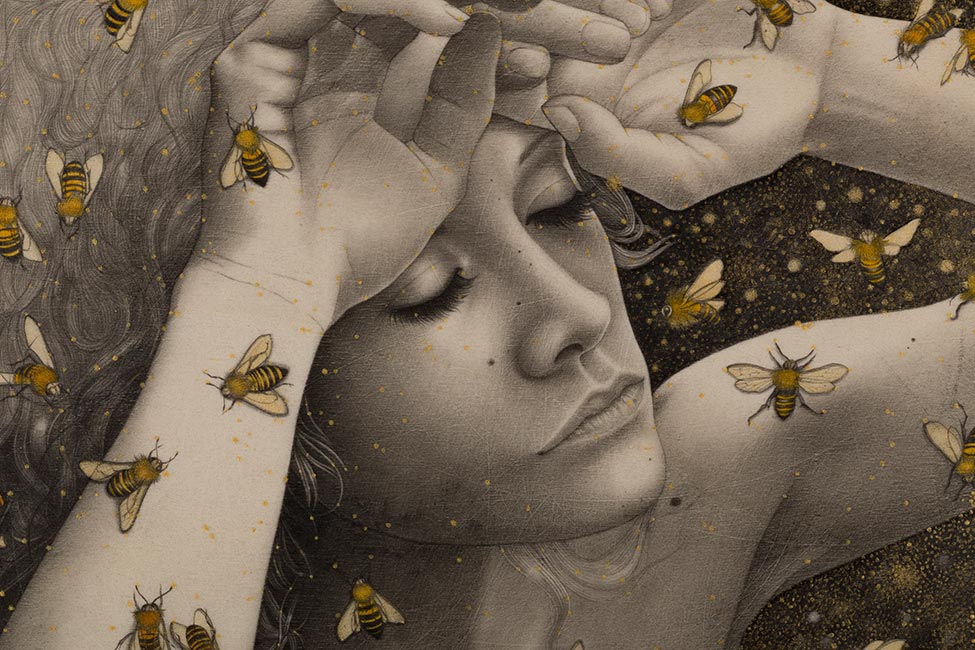 Similarly, Jung studies the path of psyche toward its totality to understand the symbols, dynamics and transformations of the unconscious. The philosopher states that this journey starts with the phase of black, connected to winter and called ‘Nigredo’; this is made of anguished feelings and the meeting of the soul with its own Shadow. This latter, allegory of the unknown represents all the aspects of the individual’s subconscious, which are unveiled because removed by the influence of the environment. However, in the night, they emerge in the form of demons. Subsequently, black becomes white, and we discover the second phase, ‘Albedo’, connected to spring, to rebirth and to the first meeting of the individual with his own psychology. Persephone dwells in the underworld during the winter and comes back to life with spring, making earth bloom again, as well as, the soul finds it rebirth in Jung’s theory and in my sceneries. 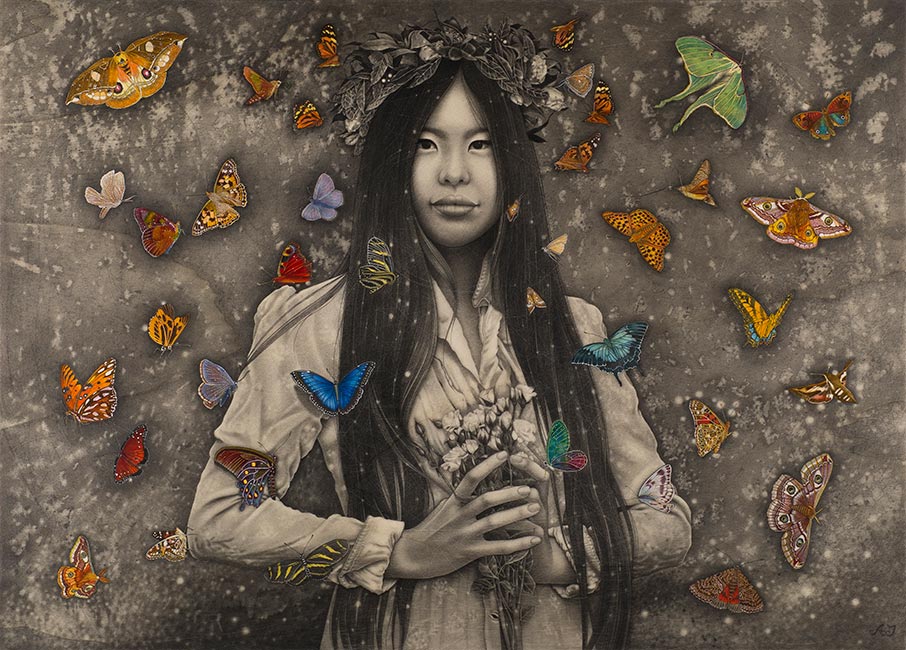 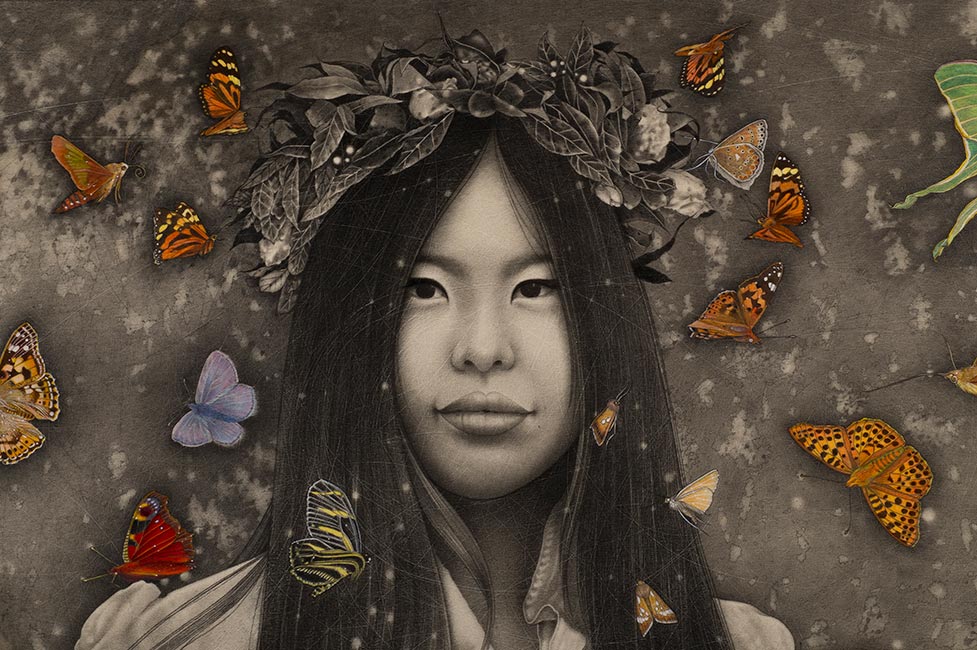 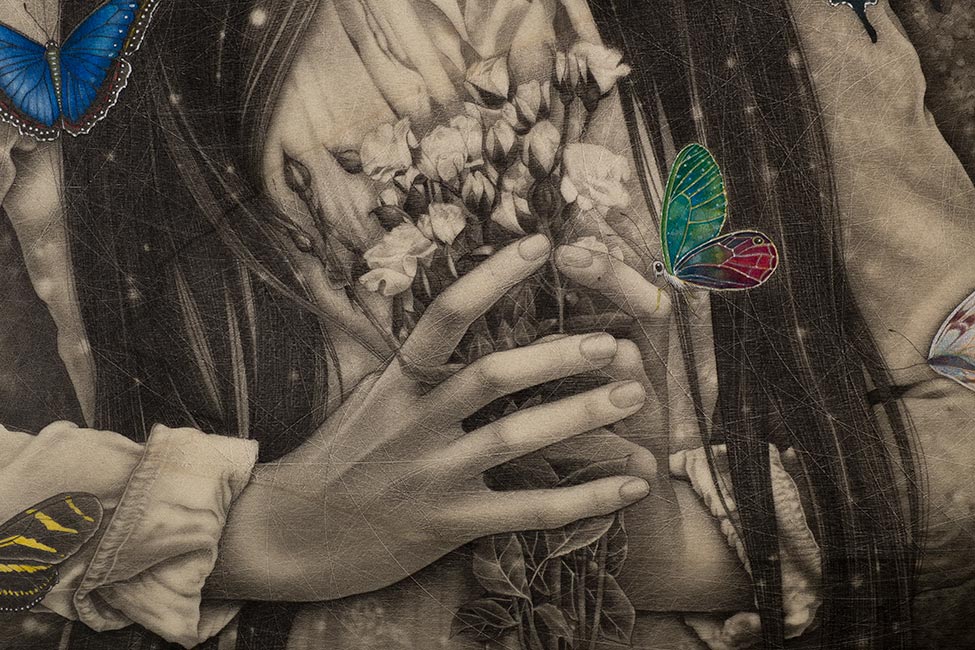 As for the other aspects of the show, the works in ‘Aurora Consurgens’ clearly recall the mystic atmosphere we can find in my previous compositions. Wild woods full of curiosities are still the materialization of my inner world. The female figure is always protagonist; she may be the transposition of my own soul in the painting, or maybe the observer’s reflection in a scenery shaped to be shared. The theme of transformation is essential as well, and the series of “Daphne Descends” is an example of how transmutation is the only way for innocent souls to find evasion, freedom. In this show, we face a passage, again, but something is different. This metamorphosis is much more complex, it is a pure explosion of spiritual energy that needs to express itself. Quiet and suspense here are replaced by a vortex of movements; light wants to unveil its power and it suddenly wakes the woods that were asleep for centuries. Nature wants to shout its secrets, which are not whispers anymore; the sparkling wings bring the message of awakening to the maidens whose closed eyes are now wide open, to grasp every change in the air. Aurora is coming and it will make beauty triumphant through the eternal recurrence of spring. 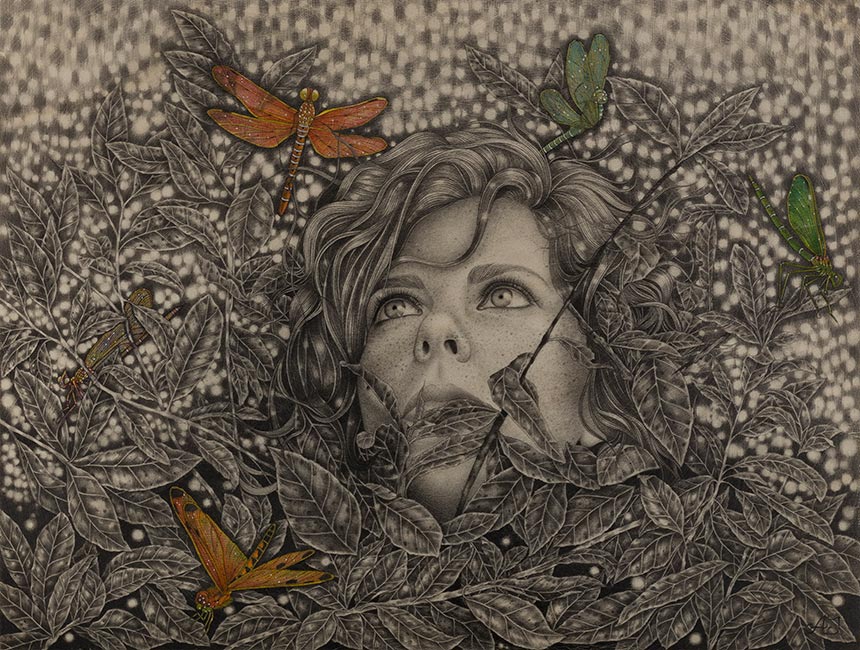 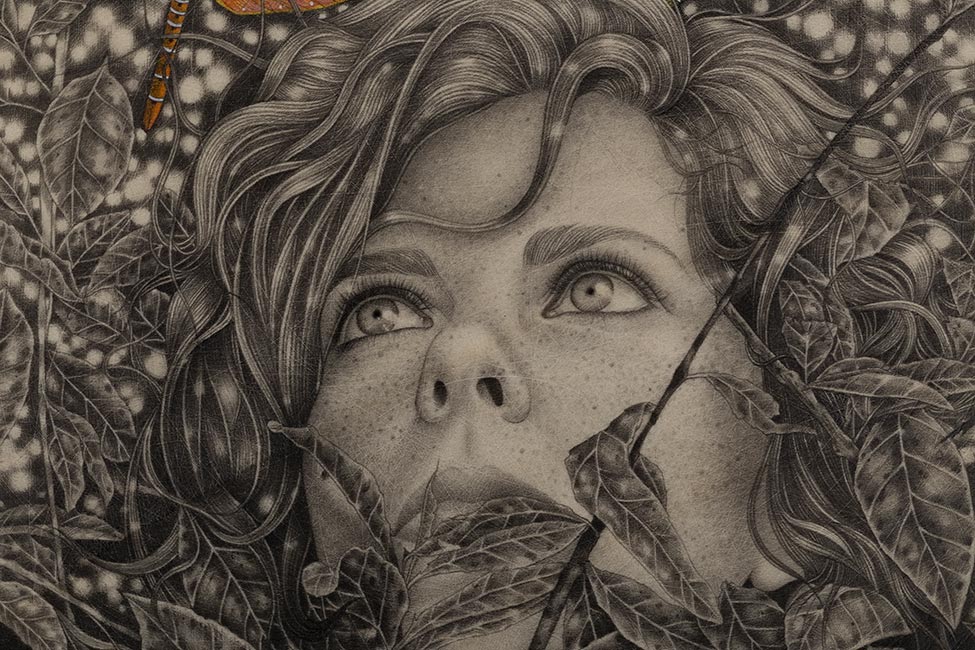 Even the process of making recalls my previous creations. The pencil runs in long but little, repetitive gestures, as a brush, patiently but determined, to invade the rough surface and create layers of nuances. What comes out lays in between the hardness of incision and the delicacy of waving silk. As final step, I add touches of color to animate some details of the chiaroscuro by using watercolor. 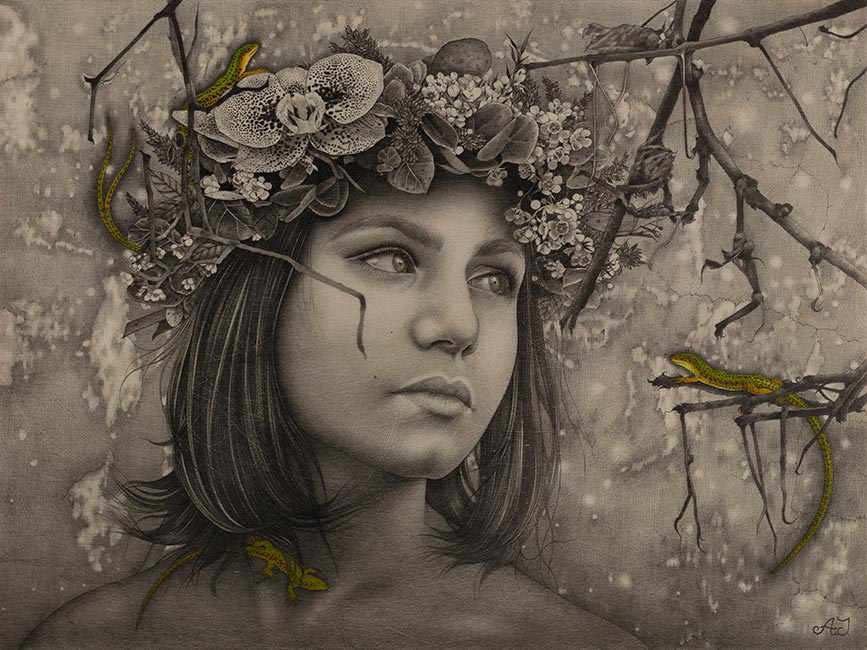 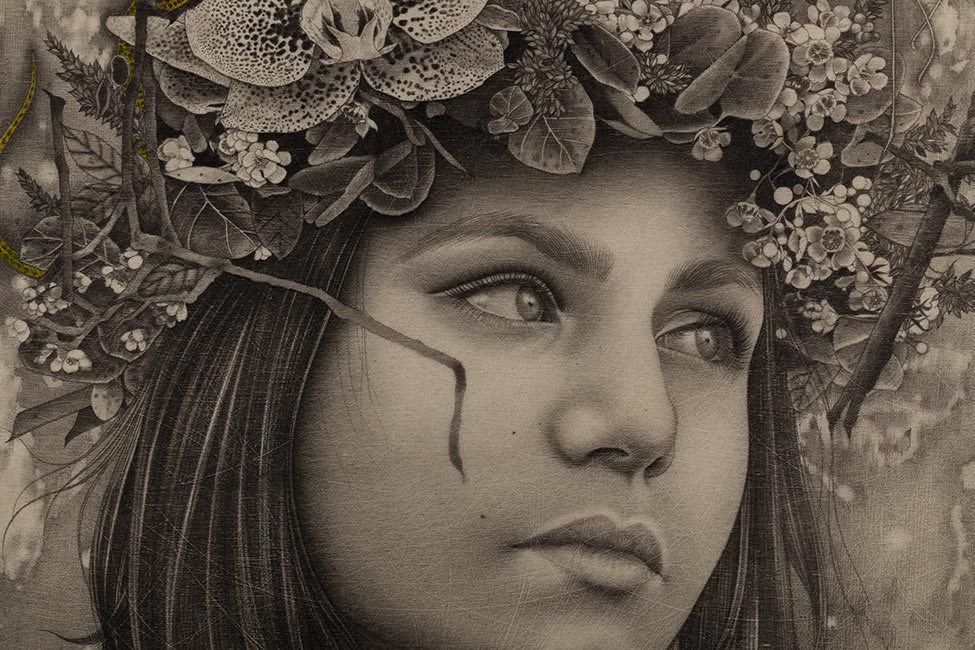 It is not easy to define Aurora Consurgens’ dimension in a sentence. It may be a secret shelter hiding in the depths of the unconscious, where all our nightmares and desires merge to overcome logic’s rules. In this way, the artwork becomes a private shrine, a mirror reflecting the observer ‘soul and guiding his/her consciousness through unexplored gardens. From another perspective, this world may not concern ourselves, not even the world around us, but ‘another’ dimension where spiritual substance replaces physical matter, where Beauty, Love and Magic dwell peacefully, similarly to Plato’s Ideas in the Hyperuranion. In my world, everything is mysterious and unstable and yet it is its same haziness that defines it. I choose female models for this scenery; they are mythological figures looking like nymphs; they are fairies, goddesses or even Nature’s maids, fusing with the magical scape which embraces them. Or, simply, these figures are ordinary girls experiencing an intimate conversation with their own ego, which reveals itself in the form of sparkling wings shining in the darkness of the mind world. 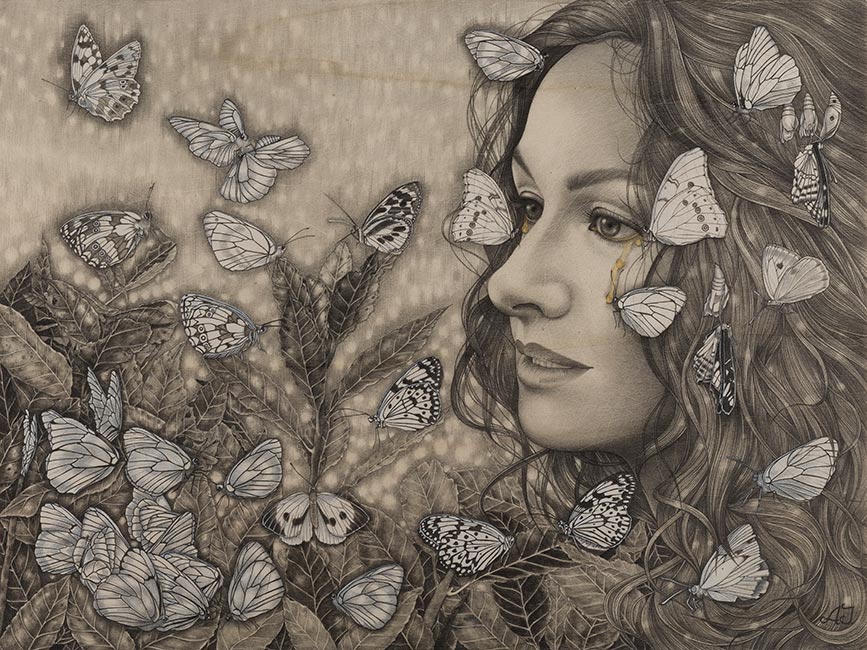 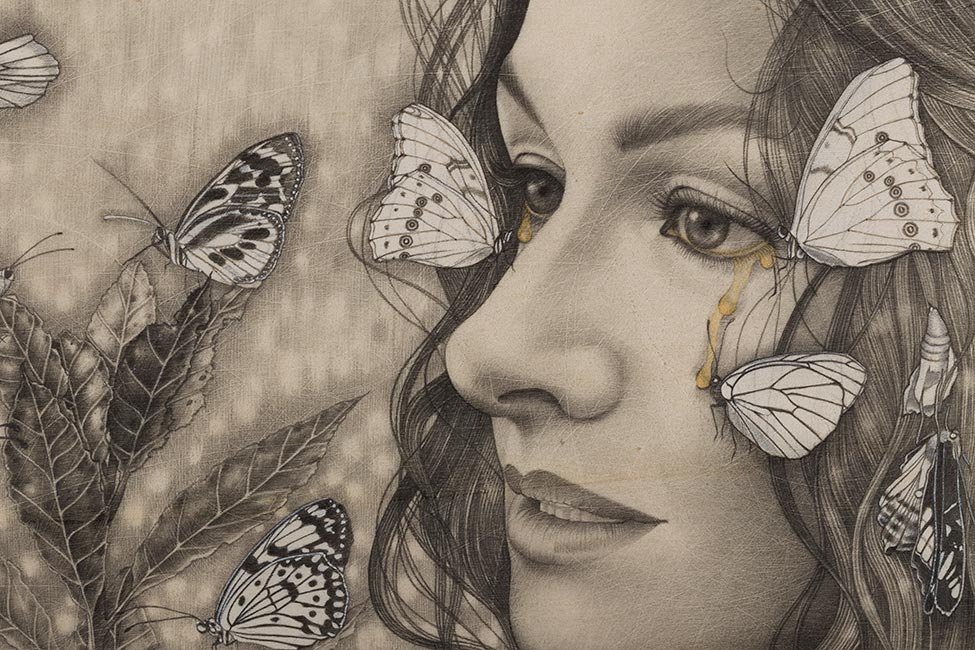 “There are lights that appear only in the deepest darkness, and shadows that one must accept to dwell in the Light. This is the Passage to transform Matter and Spirit.

The force is in the center, in the balance of the middle way, in the realization of the Tao, where the source of Being and Will connects to the final purpose and the divine spark becomes perpetual aurora, in the instant of the awakening of Love and Beauty.
Both paths, rising from light or darkness, lead to the central image, where the Eternal Girl, recurrent archetype in the Artist’s works, merges with the Mother, Shaman and Wise, who consciously lives in the eternal instant.

Fireflies, bees, moths, butterflies and small birds emerge from the original nature of manifested reality, from the Great Universal Mother. They represent the omnipresent, enlightened and secret potential, an immanent effervescence that hides beyond ordinary illusions. The eye of the Artist reveals this mystery, which is imbued with colors and shapes in a moment of connection, of sensual presence in the Elsewhere, of a slight disturbance, or in a fleeting smile.

In the meticulousness of the details, we glimpse the fragile eternity of beauty stolen from time; between shadows and lights a sacred face of Poetry emerges, young Hekate, pure and deadly.” 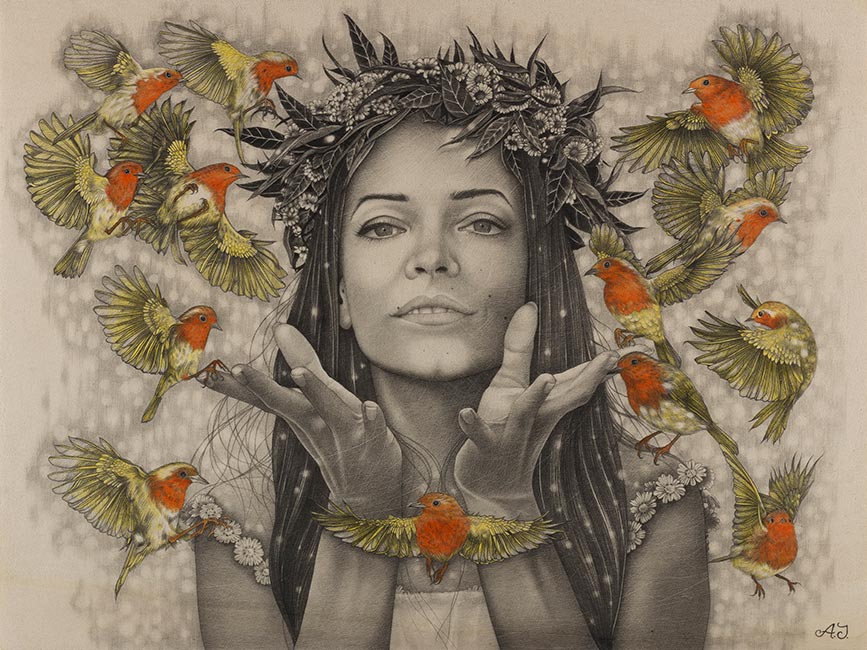 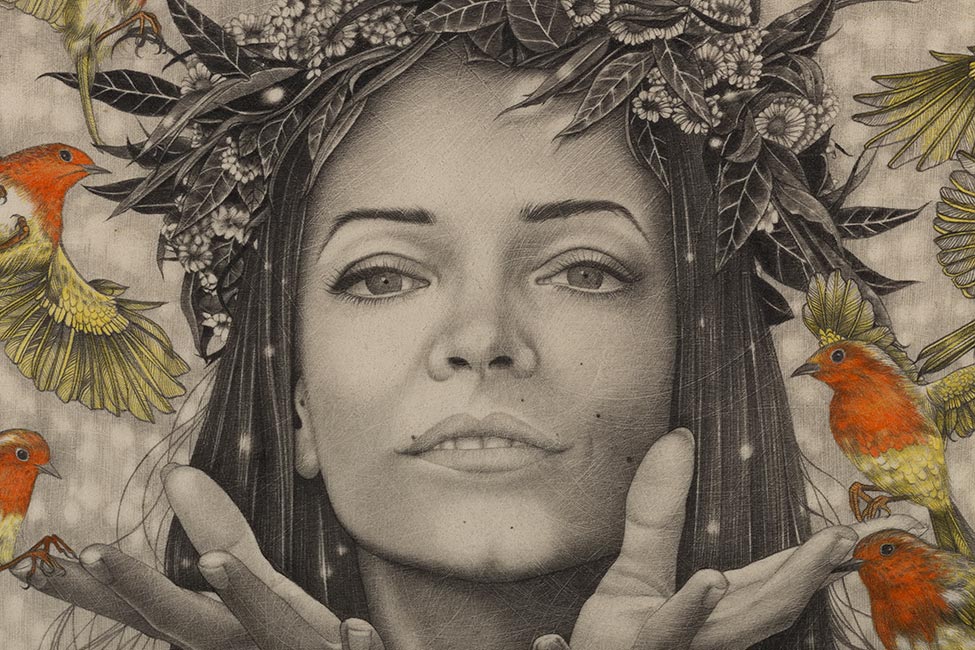 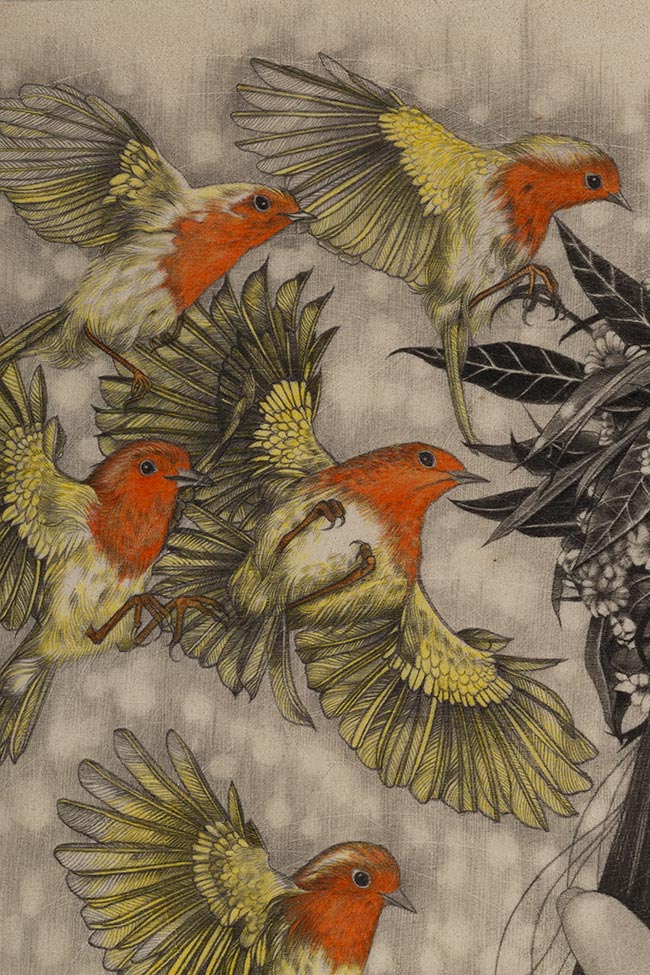 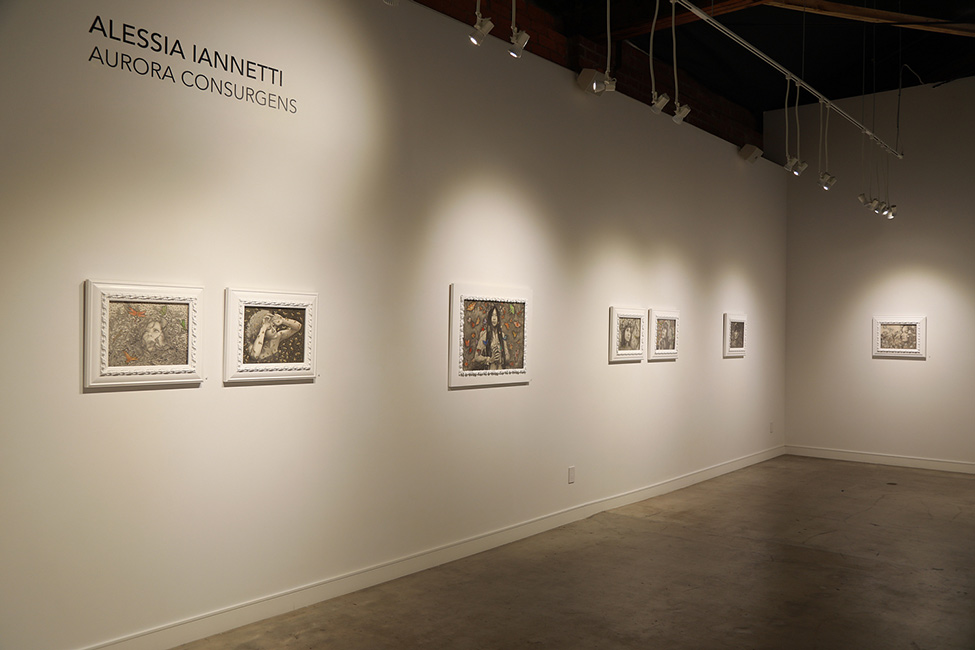 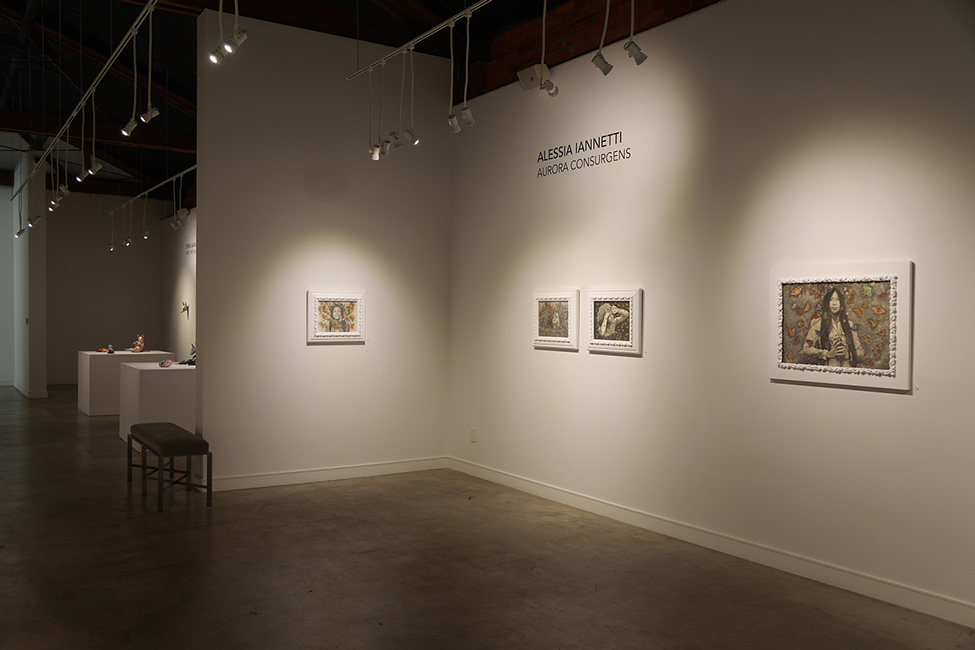 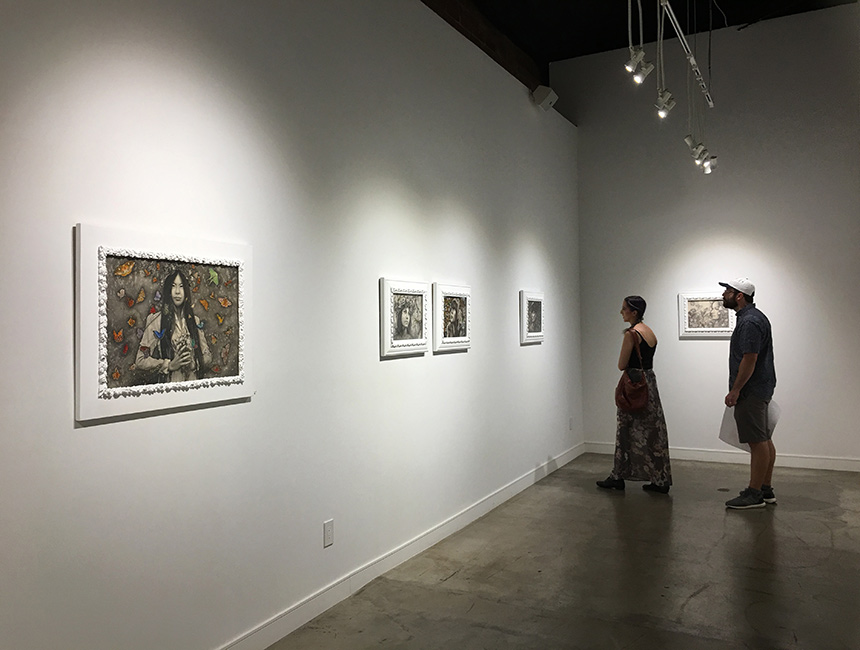 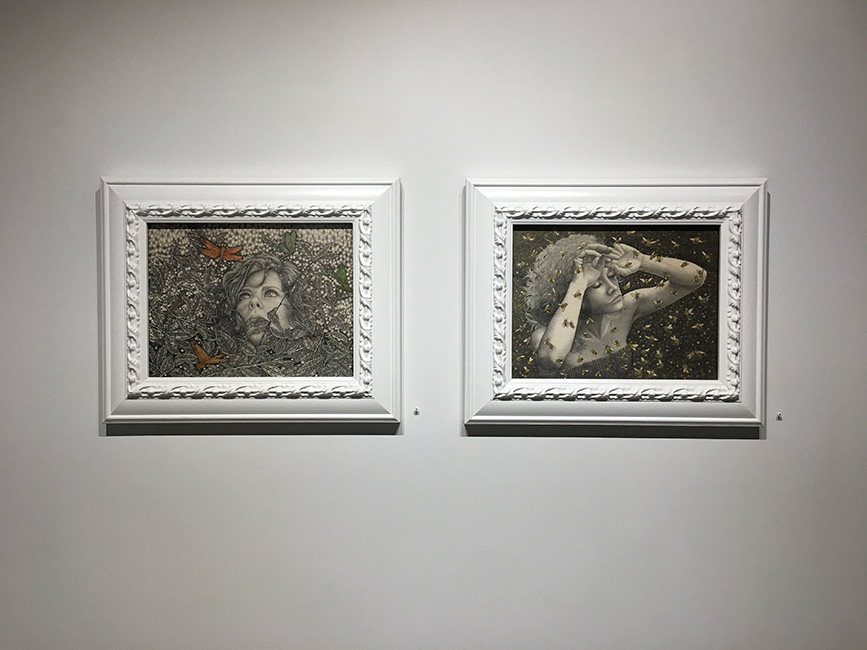