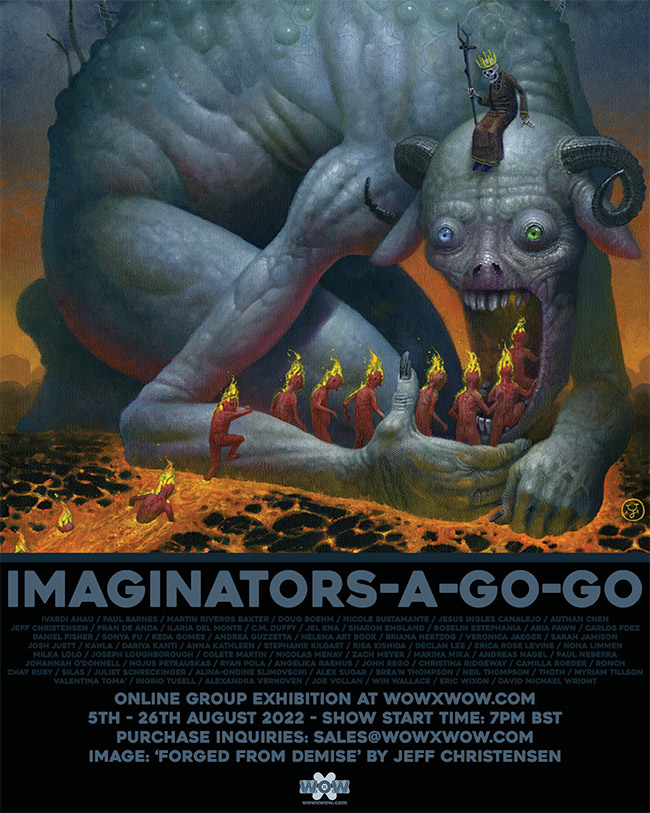 Albert Einstein famously stated: “Imagination is everything. It is the preview for life’s coming attractions.”

Of all the tools in an artist’s arsenal, the imagination has to be placed on a pedestal above the rest. Seen by many as the key that unlocks creativity and innovation, the imagination allows us to think outside the box. It aids problem solving and supports us during adversity. It helps us connect with others on a deeper level, by providing a way to put ourselves in their shoes. It allows us to escape reality and travel into the realms of fantasy, where we can explore facets of existence beyond scientific possibilities and cultural conventions. Put simply, the imagination is what makes us uniquely human.

With this exhibition, we invite you to celebrate with us, to raise your glasses in praise of the mighty powers of those imaginations in full whirring motion… imaginations belonging to the extraordinary ‘Imaginators-a-Go-Go’.

As always, we’d really appreciate you spreading the word to anyone that you think might be interested in the exhibition. We’re super excited about the work we’ve received for Imaginators-a-Go-Go, and we hope that you enjoy the show!