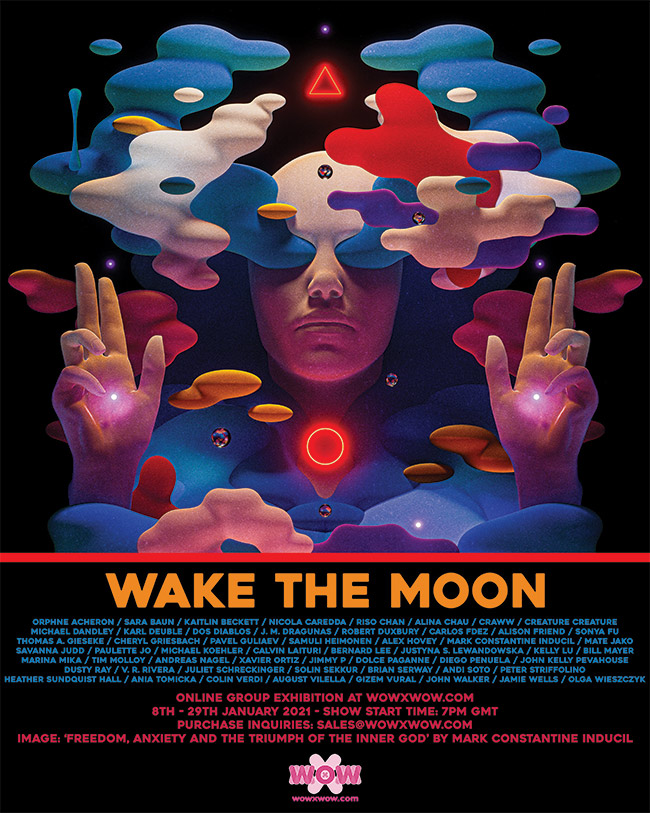 WOW x WOW Gallery proudly presents Wake the Moon. Kicking off our 2021 exhibition programme in grand style, Wake the Moon opens on wowxwow.com at 7pm GMT on 8th January and will run until 29th January. The show is set to feature more than 60 breathtaking works by over 50 super talented international artists.

With such an incredibly rich library of symbolic meaning, the moon lends itself as a metaphor for many facets of creativity and the creative process. Because of the moon’s connection to water and the tides, it is said to represent our emotions and our subconscious mind; both of which are integral to artistic expression. The lunar phases of growth and decline are often viewed as symbolic of our own personal growth and development, thus lying at the very heart of a nurtured artistic voice. The moon is seen as responsible for giving people movement, controlling the rhythm of the energy and activity of life. As a reflector of the sun’s light, the moon symbolises refection, and a crescent moon in particular represents the act of being receptive, a trait of vital importance to any serious creative. These symbolic projections could be listed ad infinitum, which only serves to illuminate, that in order to unlock creativity and unleash its power, we must ‘Wake the Moon’.

As always, we’d really appreciate you spreading the word to anyone that you think might be interested in the exhibition. We’re super excited about the work we’ve received for Wake the Moon, and we hope that you enjoy the show!

Flyer image: ‘Freedom, Anxiety and the Triumph of the Inner God’ by Mark Constantine Inducil