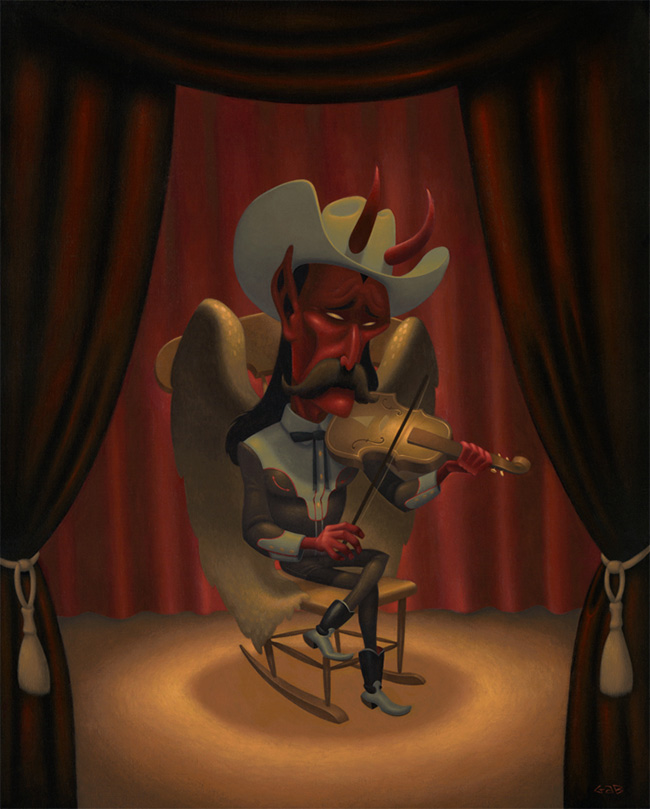 With a background in animation and illustration, it is not surprising that Spanish artist, Gabi de la Merced’s imagery is built on a strong foundation of narrative and storytelling. This fact, along with the incredibly powerful impact that American popular culture has had on Gabi since an early age, has led to his development of a rich visual vocabulary and symbolism that is universally identifiable and also widely appealing. He combines his fascination for religion, classical mythology and classic fiction; reinterpreting characters and scenarios and creating fresh perspectives on these timeless insights into existence and its themes of mortality and morality. Gabi de la Merced revels in burrowing into the human condition, all the while uncovering and excavating treasures and shining a unique spotlight onto his bounty.

Gabi de la Merced was born in Madrid, where he studied traditional animation at the Madrid School of Film (ECAM). He has worked as an illustrator for big companies and at a more underground level for local skateboard brands and independent record labels. When it comes to his drawing and painting, Gabi is entirely self-taught. He began exhibiting his art in 2013, both in his home country and abroad and has shown in galleries such as, the Cotton Candy Machine, Plastic Murs, La Luz De Jesus and Gallery1988.

WOW x WOW was super honoured to have one of Gabi’s meticulously realised graphite drawings, ‘Last Song for the Damned’, in WOW² (the first of our exhibitions of square artworks), this past October. We are now delighted to bring you the following exclusive interview with him, in which he gives insight into his working methods and inspirations. Enjoy! 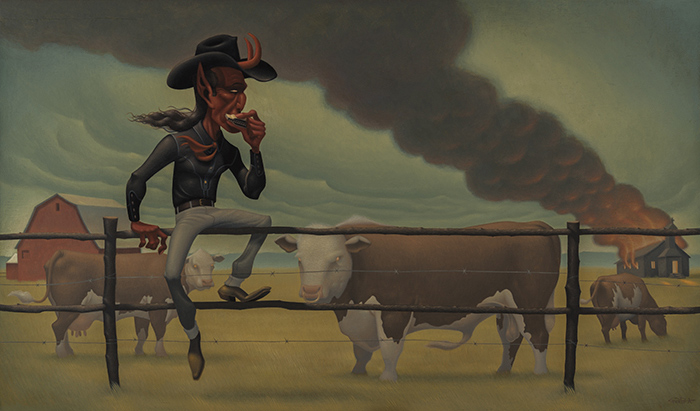 Hi Gabi, thanks very much for making the time to have a chat, we really appreciate it. To get us started, can you give us some background on what has lead you to this point in your professional life, be it your formal training, hard work, serendipity, etc.?

I always thought that I was going to enter art school and specialize in painting, but it seems that life had different plans for me. I ended up, both professionally and academically, into photography and cinematography and I worked as a colourist for commercials and feature films for more than a decade. Anyway, I think that It was nurturing and provided me with a background in the colour field, an aesthetic criteria and a narrative sense, which have been really helpful for my actual work as a painter and illustrator.

I also studied traditional animation, learning a lot about pure and simple drawing, but when it comes to painting, I’m self-taught. It has been a self-learning process, through trial and error and hard work.

The point is, as I progress my levels of personal exigency rise, and my feeling is that the way to go gets further day after day. 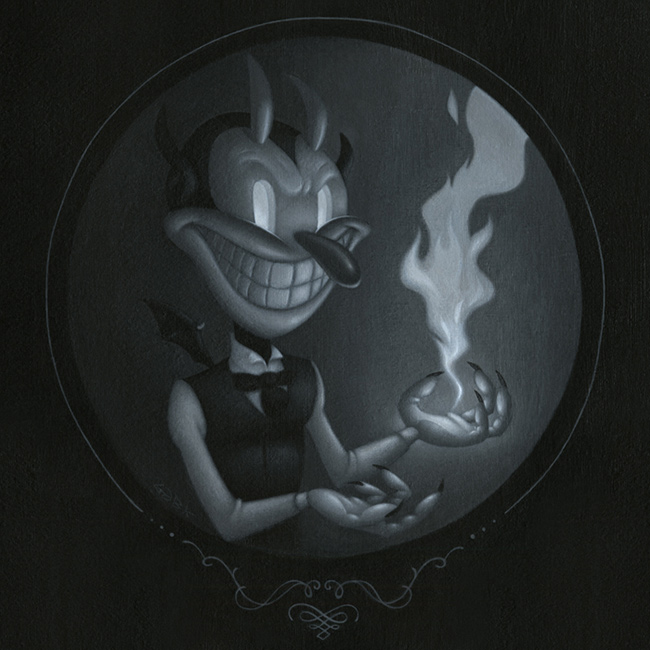 Almost every child has drawn at some point in their lives and most of them give it up sooner or later. I’m one of those who never gave it up.

My mother has always been an avid reader and she is not prejudiced about comics, so there were comics all around my parent’s home and I was constantly trying to recreate my favourite characters. The truth is that I did it with almost every drawing that fell into my hands. For example, it may look really weird to see a child as young as 8 years old, drawing his own versions of political cartoons in newspapers, drawing Mijaíl Gorvachov in a joke about the Cold War or something like that.

Later, during the late 80s and early 90s, the suburban city near Madrid where I grew up, surely due to a nearby American military base, became one of the first places in Spain where graffiti ignited. That is how I began to paint. 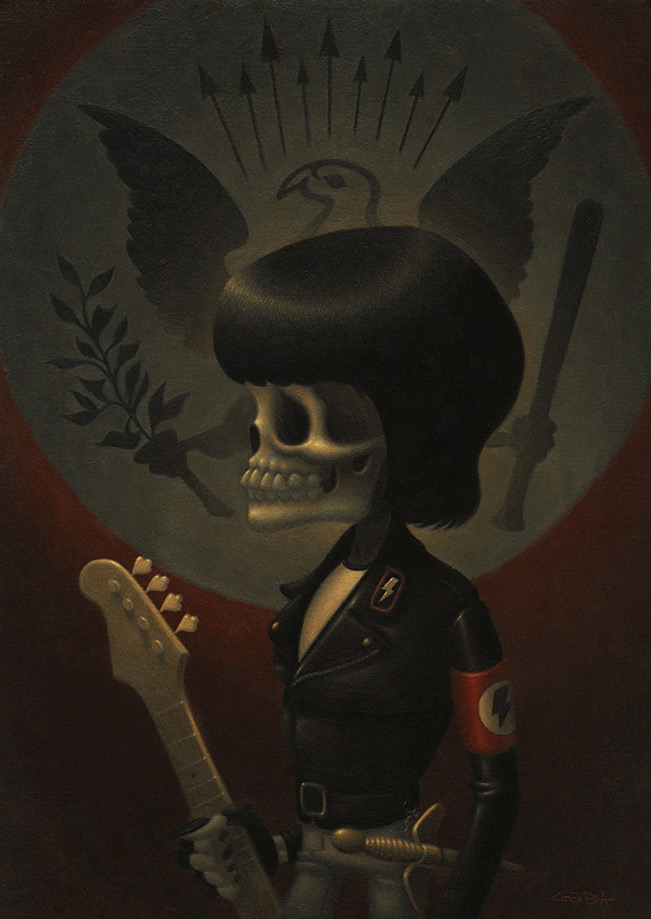 Where does your sense of community stem from as an artist? Do you feel part of a close-knit scene in your home city, or do you connect more with other creatives online? Is community something that is important to you and your creativity?

I’m more connected with other artists in Madrid. Since I’m based in Barcelona I’m afraid that I’m too isolated in my studio, being only connected online. I think that is something key and truly enriching and I have to work on it.

How do you approach the creative process? Talk us through how you construct a painting. Do have a concrete idea of what it will look like before you get started? What type of reference do you use?

I use a lot of documentation. I torment whoever I am able to in order to take pictures of reference poses. I also collect all the material that I can regarding whichever item that may appear in the piece I’m working on.

I work a lot on pencil sketches and when I’m completely satisfied I scan them and make some last digital retouching. I then use them to make a digital study of colour and values that really aids me in not getting lost when facing the blank canvas. Later on, I transfer the line work to a wooden board that I’ve previously primed and meticulously sanded, prepare the colour palette and begin to paint.

In his conversations with Truffaut, Hitchcock said something about having a perfect mental image of the movie and, from that moment on, all the processing stages to make it real, involved diminishments and sacrifices regarding the first concept that he had. I frequently remember that quote. 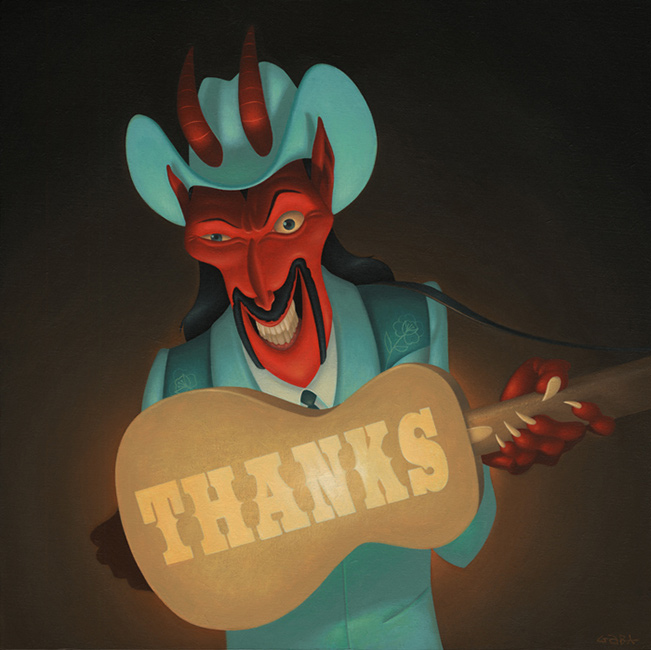 Your work regularly features recognisable characters from pop culture, which you re-contextualize and present in alternative narratives. We’d love for you to share some thoughts about the current themes you’ve been enjoying exploring through your art. Or better still, pick one piece you feel has been particularly successful and give us some insight into your thoughts and inspirations.

The truth is that I haven’t been focused on my personal work for a particularly long time (less than five years), and it has evolved very fast. Those characters appeared more often in my first pieces. It seems that I’m increasingly tending to create my own imagery more than revisiting those pop culture icons (which, on the other hand, I find really interesting and enjoyable and I sometimes can’t help featuring).

In the series I’m currently working on, I revisit passages from the bible, classical mythology or writings like Milton’s ‘Paradise Lost’. ‘Gates of Hell’ for example, is my personal interpretation of the encounters between Satan, Sin and Death at the Gates of Hell, under my own prism. Those images are really powerful. That’s why they are so recurrent throughout art history.

In addition, I have plenty of room to include all the imagery of roadside bars, biker gangs, outlaws and other clichés from deep America that really appeal to me. 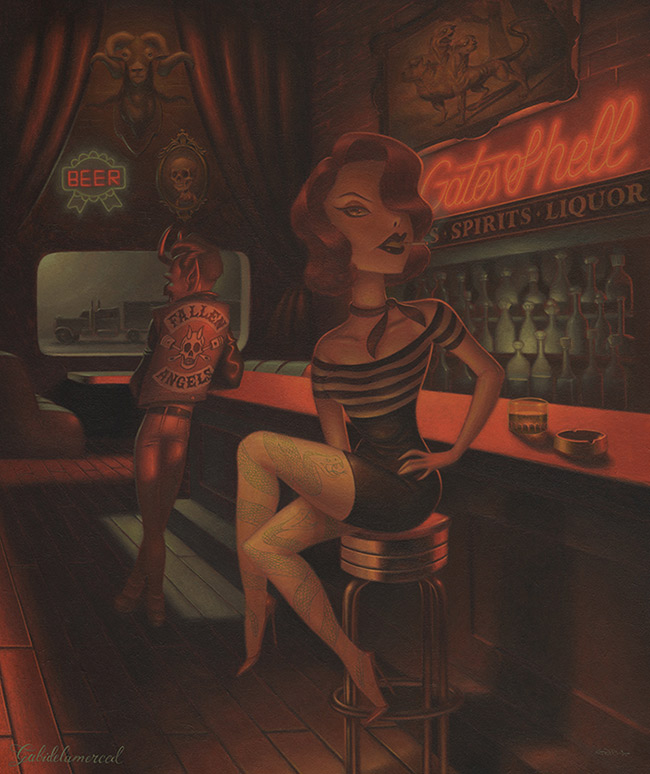 When I’m designing a piece, I always try to define everything as much as I can. I intend for all the elements of the painting, the way they appear and how they look, to have intention on a narrative level and help with the telling of the story. I try not to include anything randomly.

On the other hand, my relationship with each piece is incredibly close, almost obsessive while I’m working on it, but once it’s practically finished, I’m already thinking on the next one. The truth is, that once a painting is finished I don’t pay much attention to it. 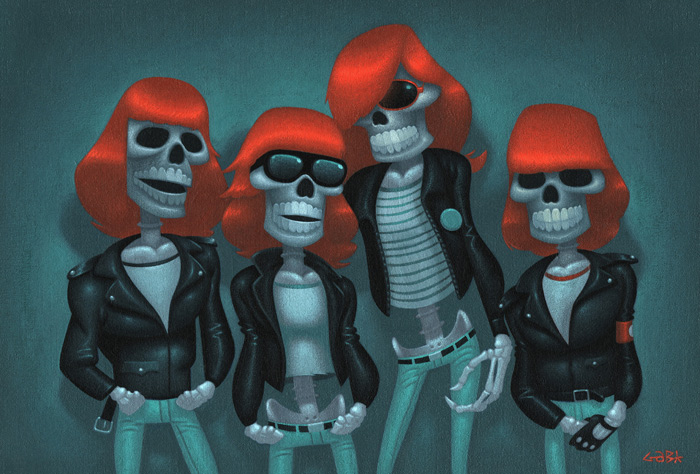 With regards to acrylic painting, I began to paint when I was studying traditional animation. I soon realized that animating wasn’t my thing and painterly processes were what I was really interested in.

At that time, I was inspired by the artists behind the painted backgrounds of series that I love, such as Ren & Stimpy. Those artists often use dry brush techniques. Everything changed, and a world of possibilities opened to me when I began to work in the opposite way, applying really thin layers and very diluted paint, glazings and that stuff.

Regarding my graphite work, introducing brushes into the process was key. 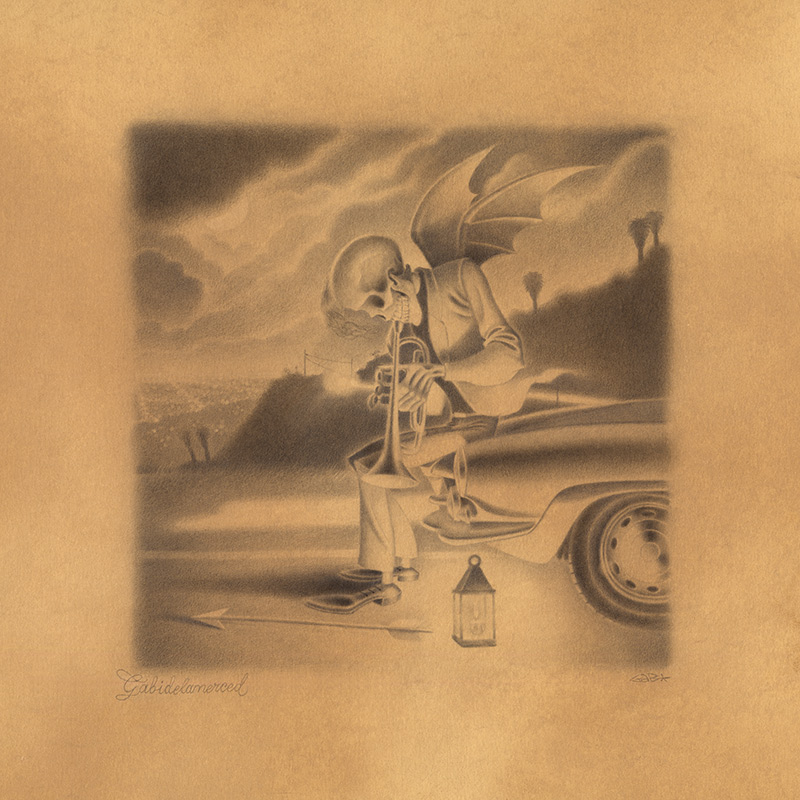 Being an artist who works within the visual realm, can you shed some light on some of the most important inspirations and influences on your work that aren’t visual and how they have helped you evolve your subject matter and creative practice?

Music and literature are central driving forces behind my work. Just a title or a short excerpt from the lyrics of a song that really makes me feel something can trigger a mental process that leads to a complete series of paintings.

In the same way, a passage from the life of a damned musician (I’m a big consumer of music-related biographies) or a paragraph from a writing like the Book of Revelation can be really stimulating to me and create really powerful mental images. 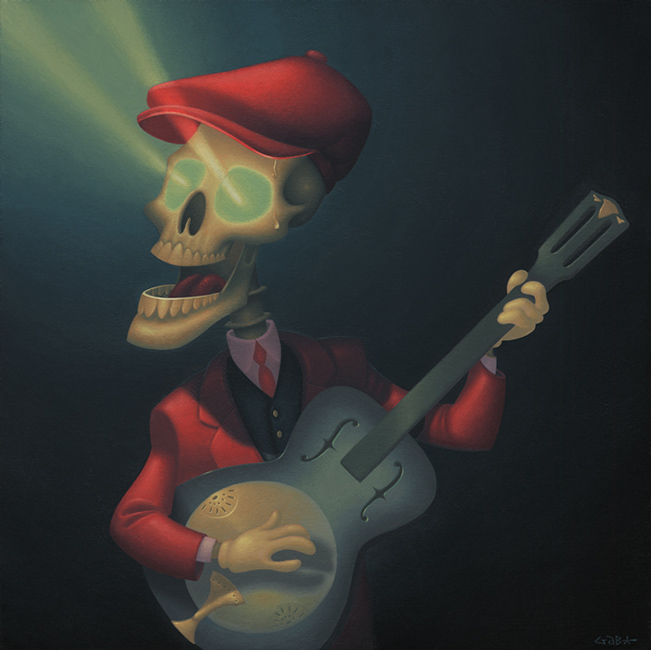 What would be the greatest compliment you could ever receive about your work?

Since I was a child I’ve never been good at social relationships. As I’ve grown up I’ve learned to cope with human beings and I’ve improved my social skills, but drawing and painting are still my main comfort zones. 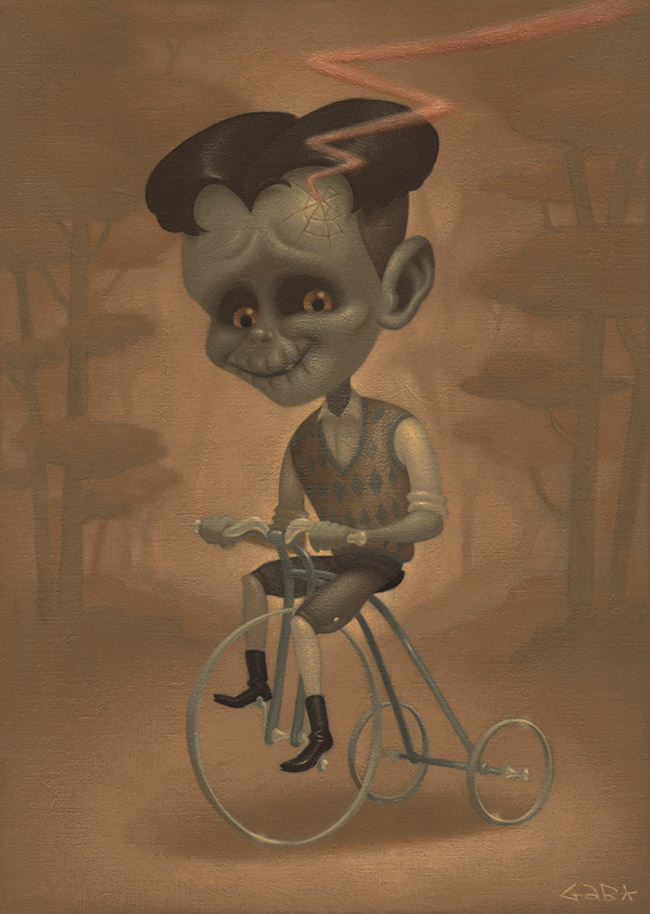 ‘Dante and Virgil in Hell’ by William-Adolphe Bouguereau. The lighting, the composition, the colour palette, the masterful representation of the human body, the movement… I think that everything in this painting is perfect, but besides that, it’s amazingly powerful. It also includes the horned guy with wings, something I can’t resist.

Anyway, it wouldn’t be an easy decision. Tomorrow I’d maybe choose another one, ‘The Lament for Icarus’ by Herbert James Draper or ‘The Fantastic Hunt’ by Franz von Stuck, for example.

I hope to keep on working on new commissioned paintings, more covers for cool records, some exhibitions and being able to continue developing my personal work. In essence, to keep on painting and keep on growing as an artist. I’ve recently had my first and really satisfactory contacts with oil painting and I’d love to focus on it. 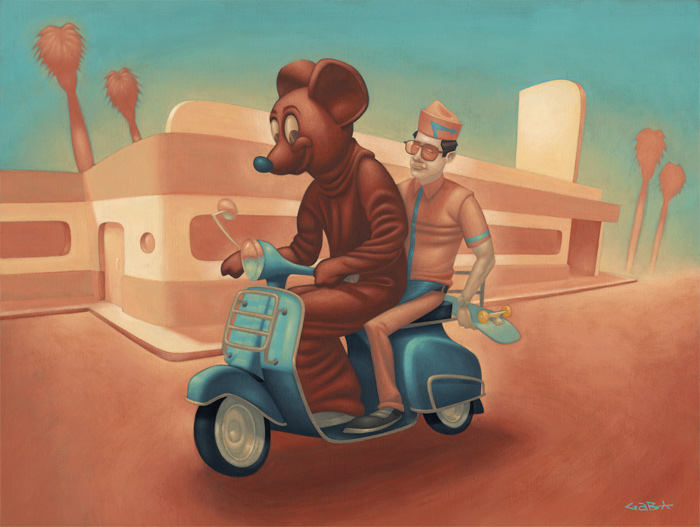 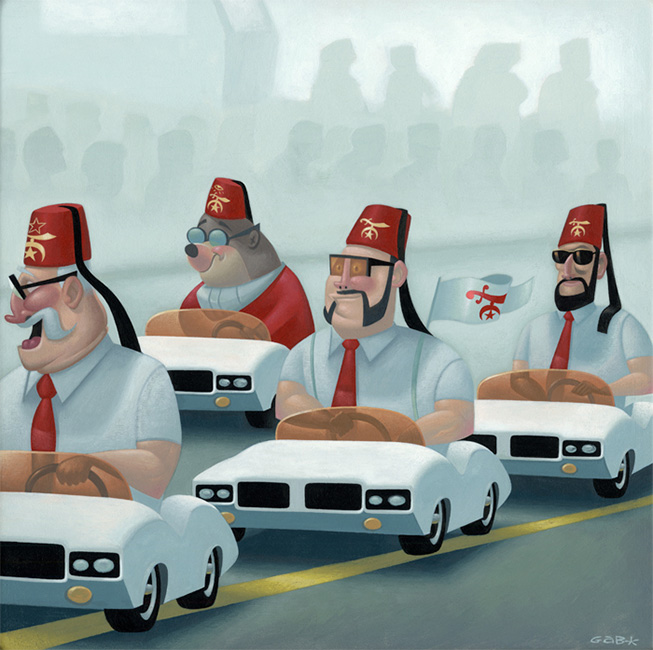 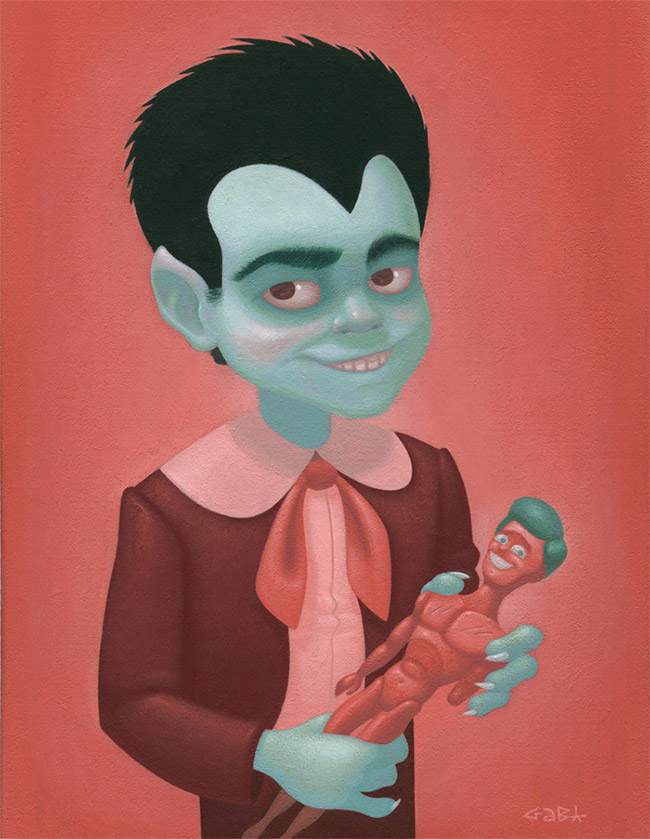 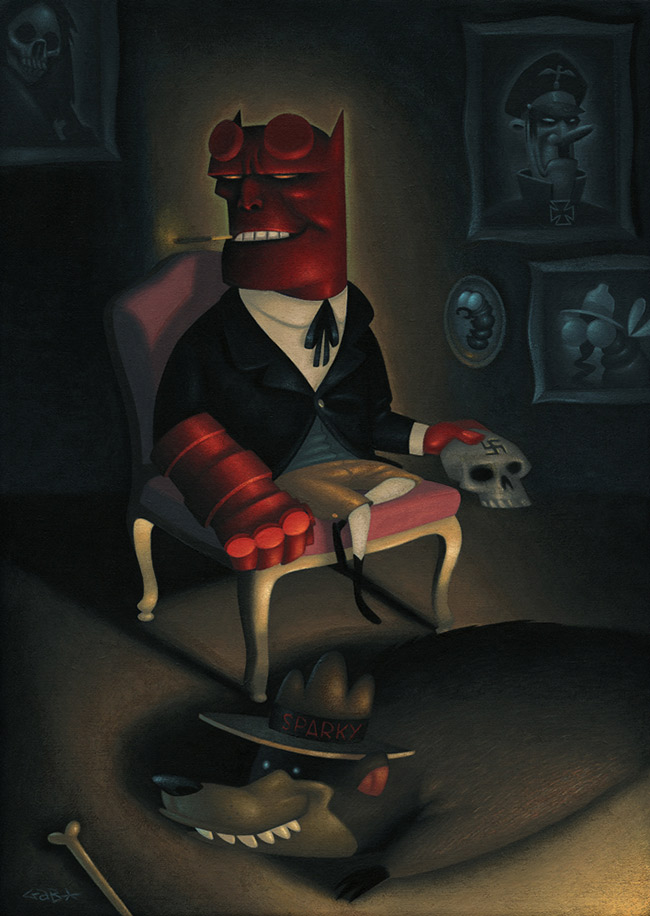 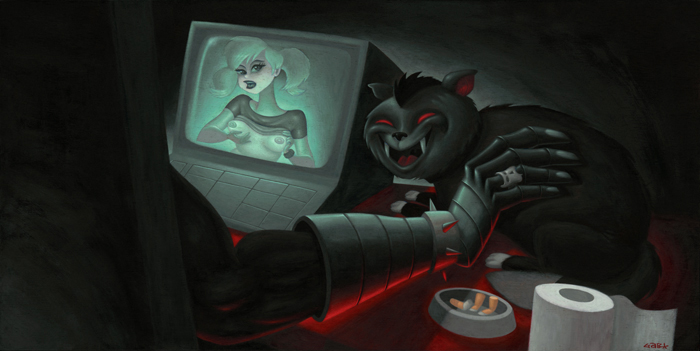 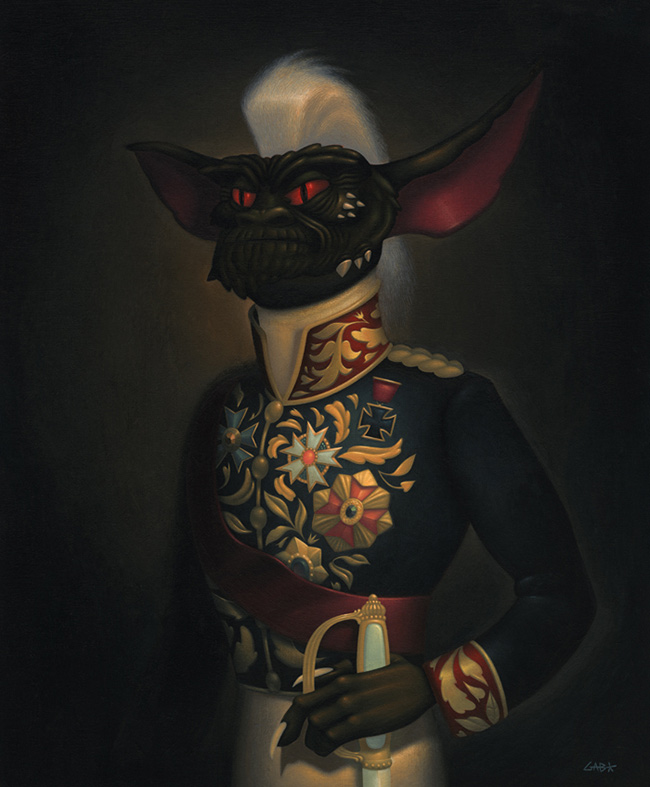 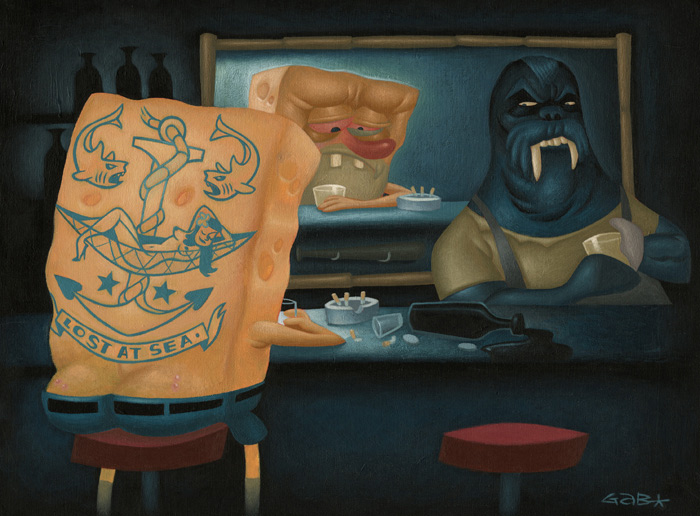 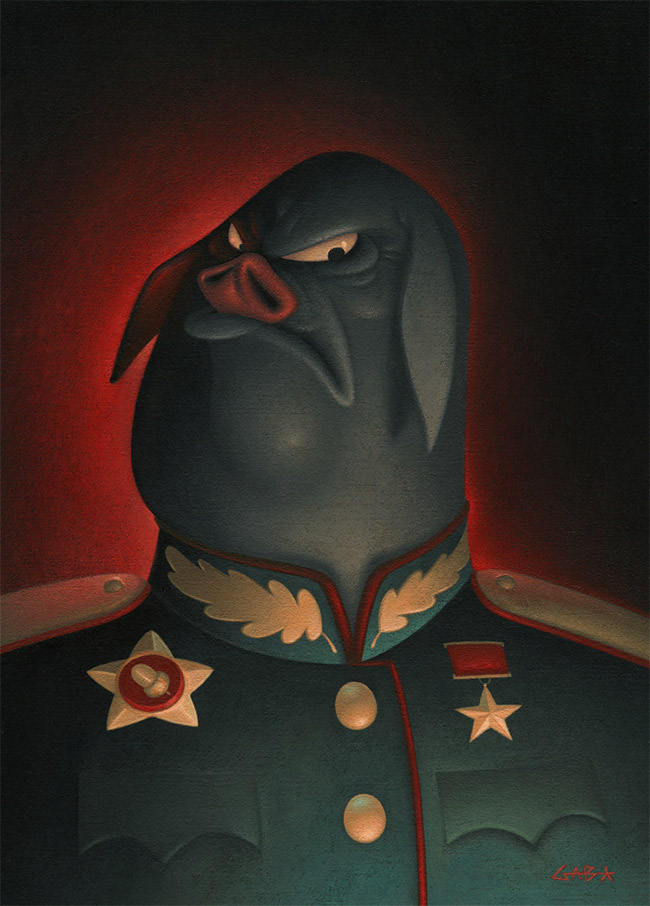 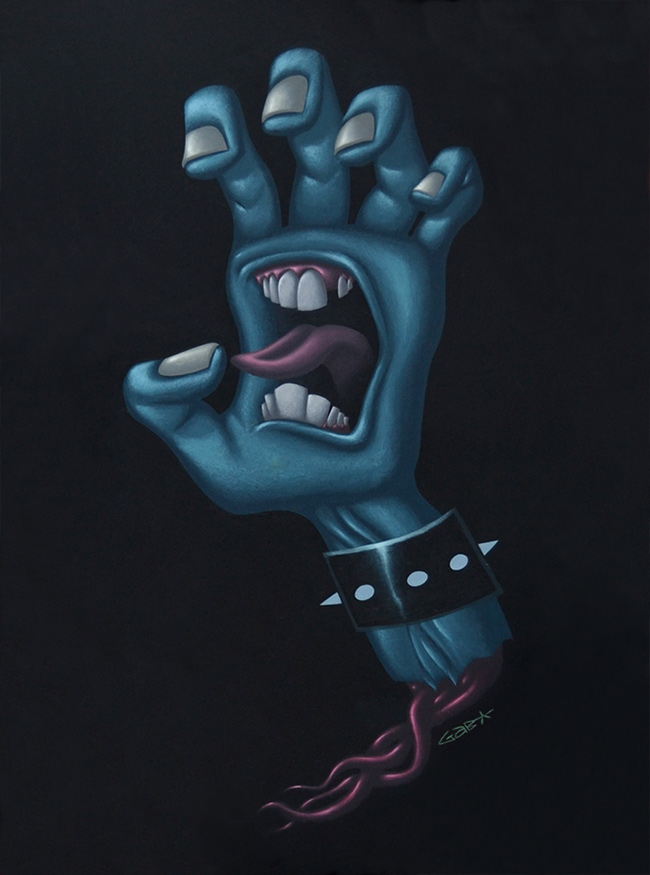 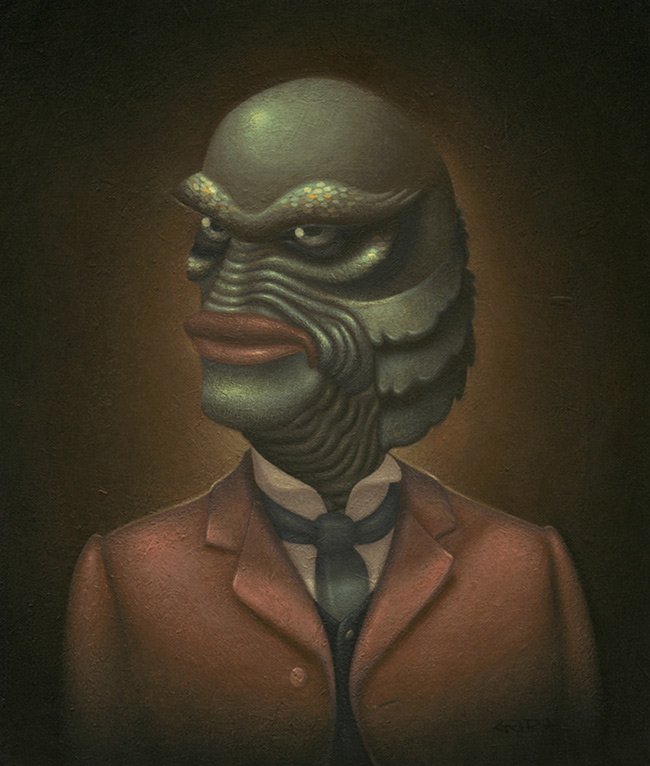 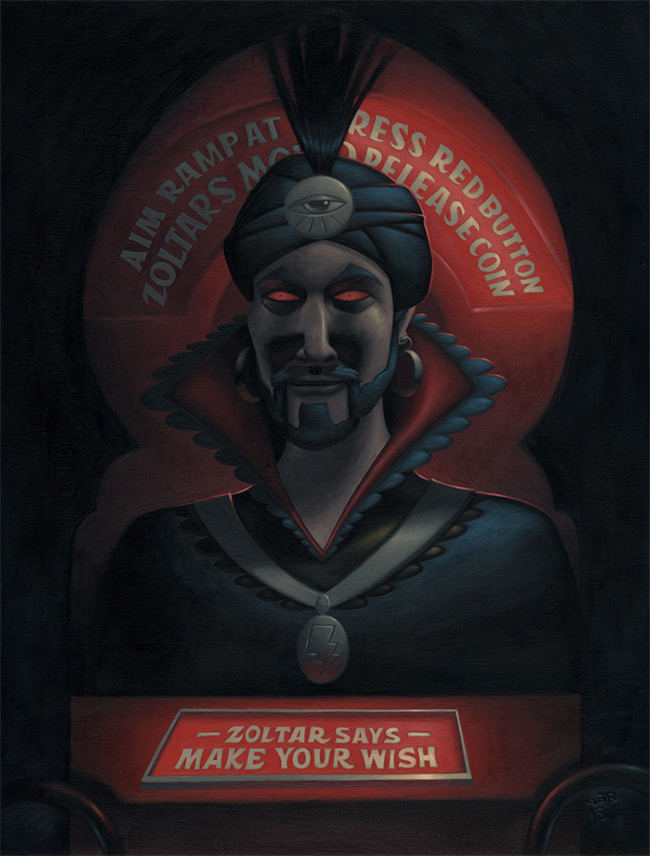 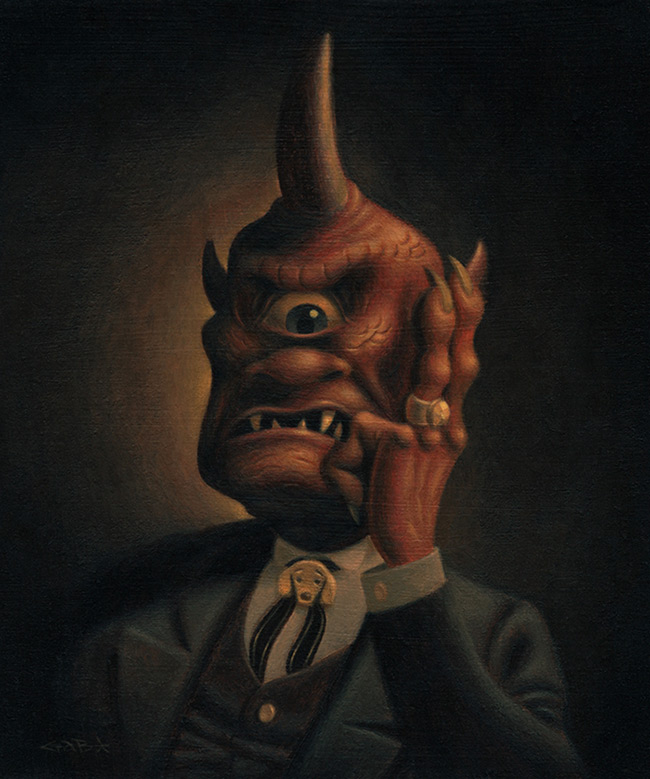 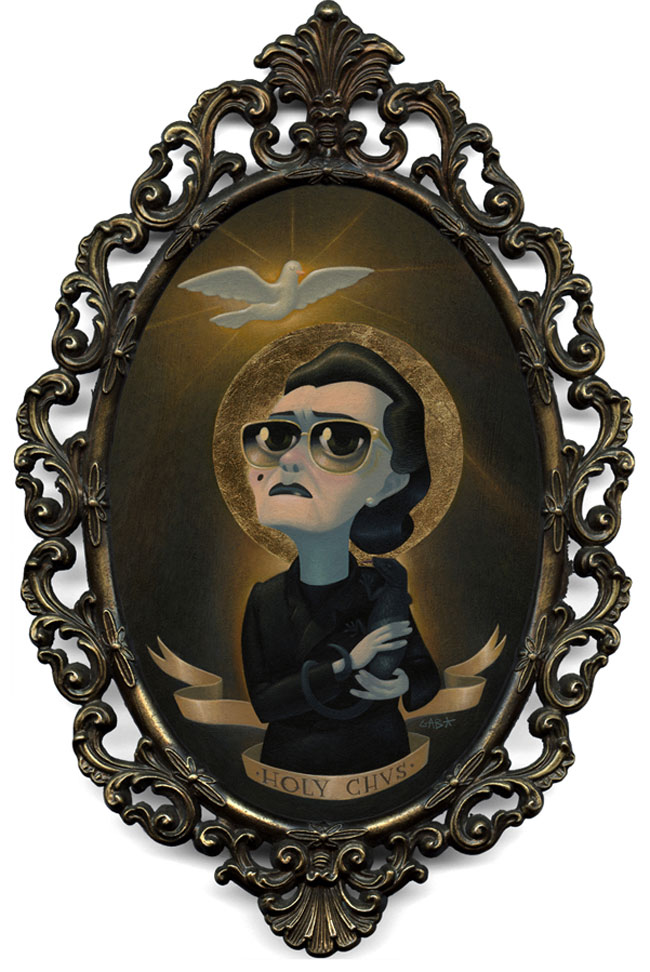 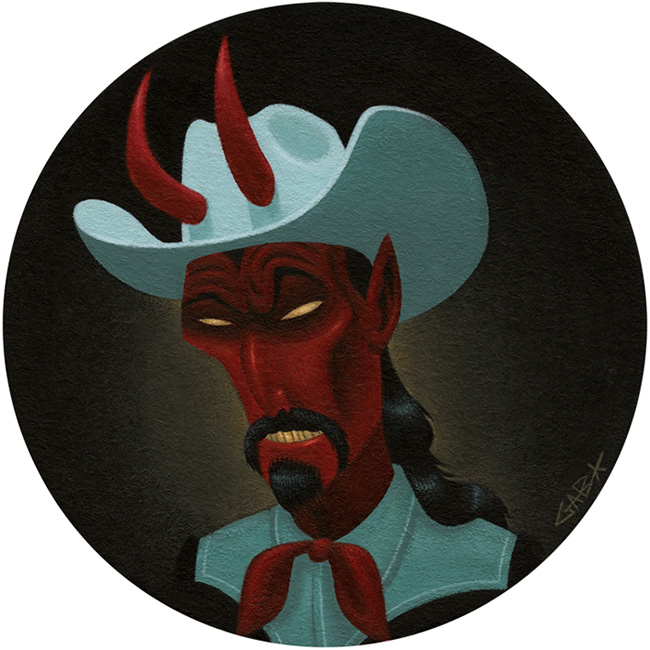 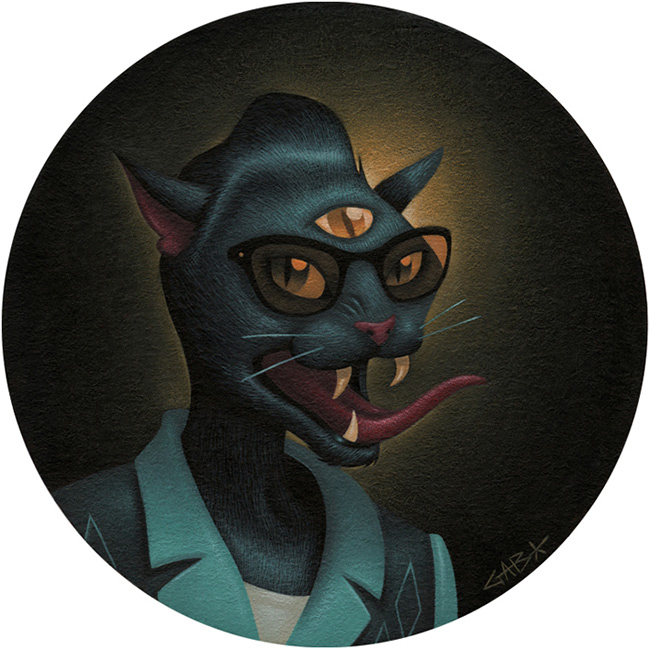 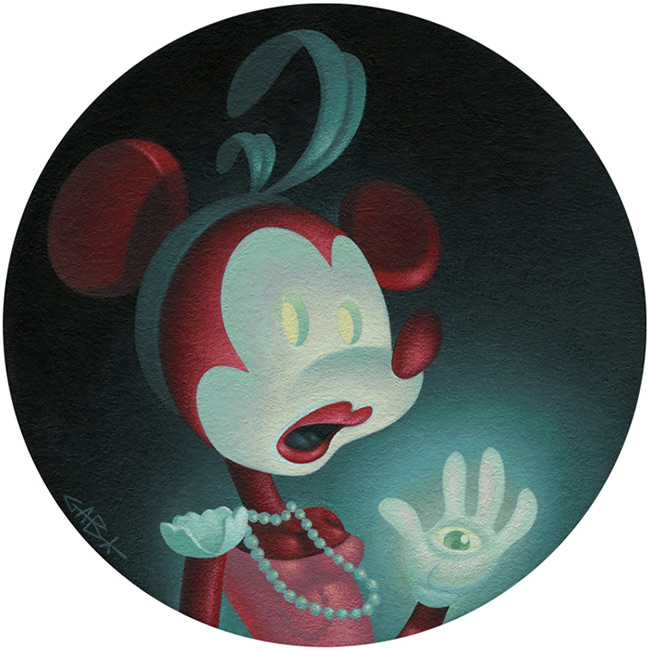 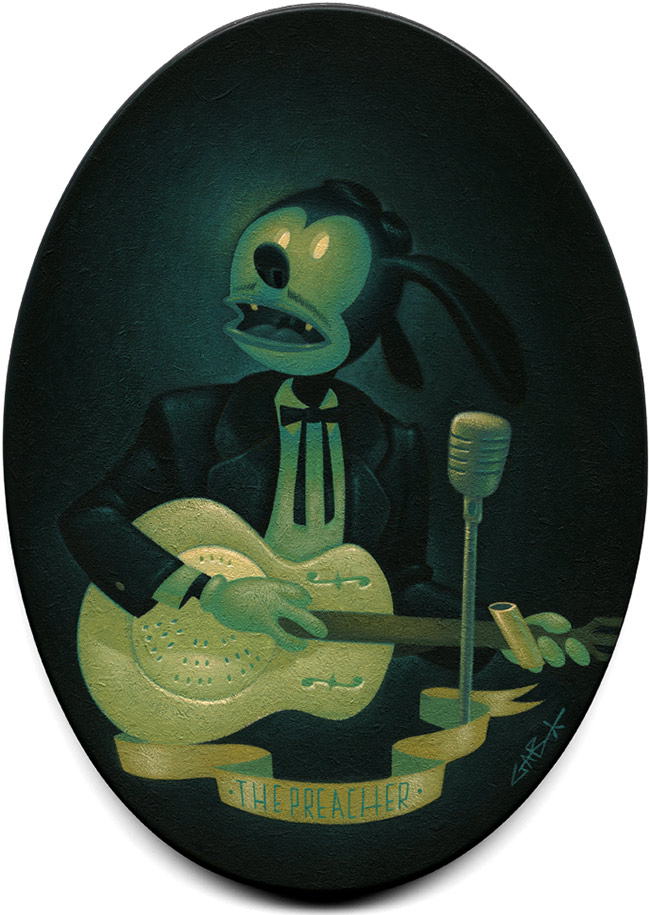 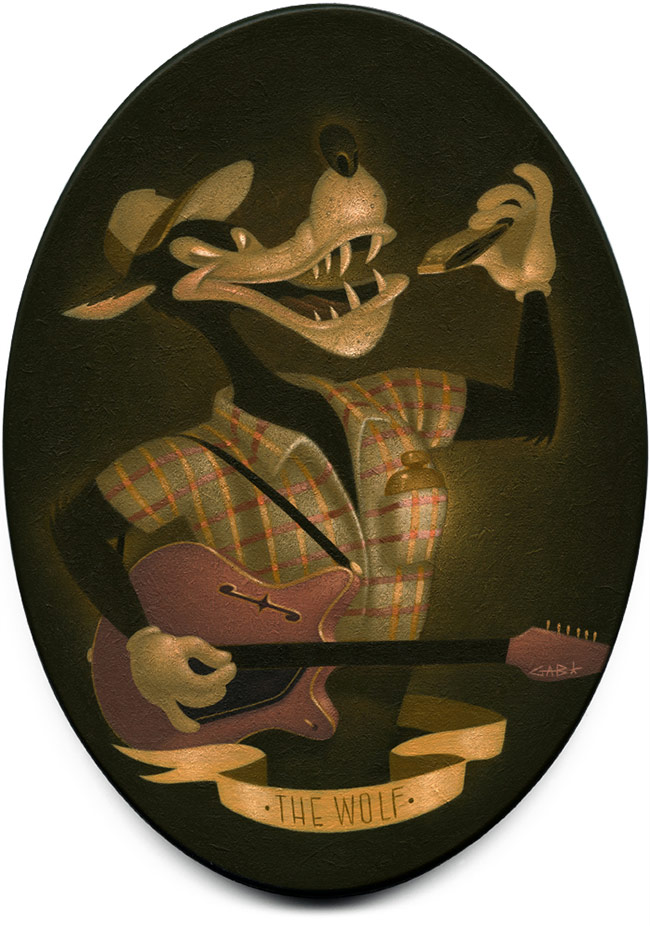