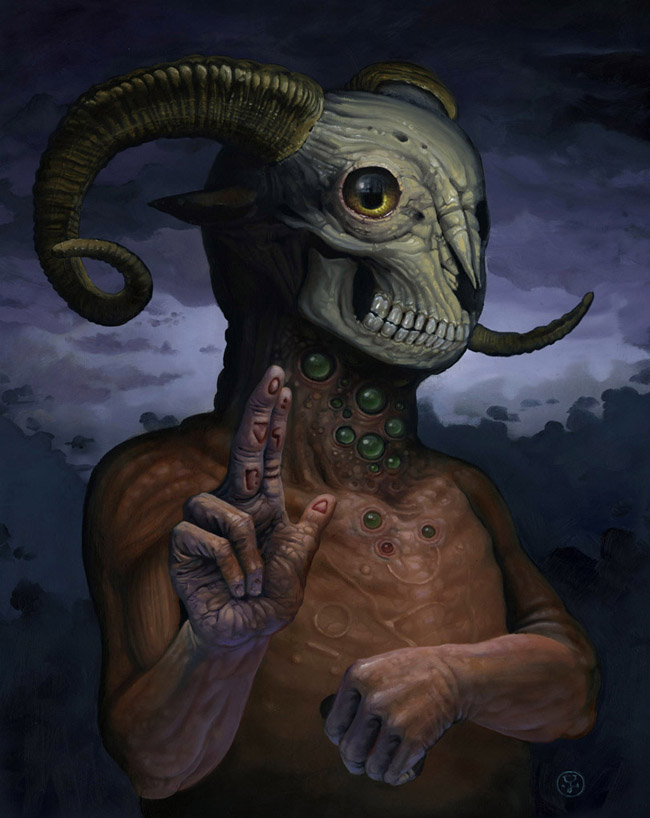 The imagery which spills forth from the mind of Jeff Christensen takes its cues from his discomfort within society, his distrust of people in power, and his unease with the dogma of organised religion and the pervasive credulity of superstition. The narratives and messages contained within Christensen’s skillfully crafted paintings are borne from a satirical wit and his impressive grasp of a rich and darkly mysterious tapestry of personal symbolism. Many of the protagonists Christensen depicts exist in an enigmatic alternative dimension and appear to be on unusual and enlightening journeys of self discovery. We are invited to join them, where we are encouraged to unburden ourselves from the shackles of the prescribed doctrine of contemporary society; granting us freedom from the daily manipulation of our hearts and minds.

Jeff Christensen was born is Seattle in 1976, and currently lives and works in Salt Lake City, Utah. Raised on a diet of Heavy Metal and the dark imagery which often accompanies the genre, Jeff’s early ventures into art making adopted Metal’s aesthetic and scepticism, which he would later develop into the captivating artistic prowess he now wields. Jeff has exhibited his artwork extensively, both in his home country and abroad, at galleries such as beinArt Gallery, Australia.

WOW x WOW grabbed a recent opportunity to pose a few questions to Jeff about his work and inspirations. Read what he had to say in the exclusive interview below. 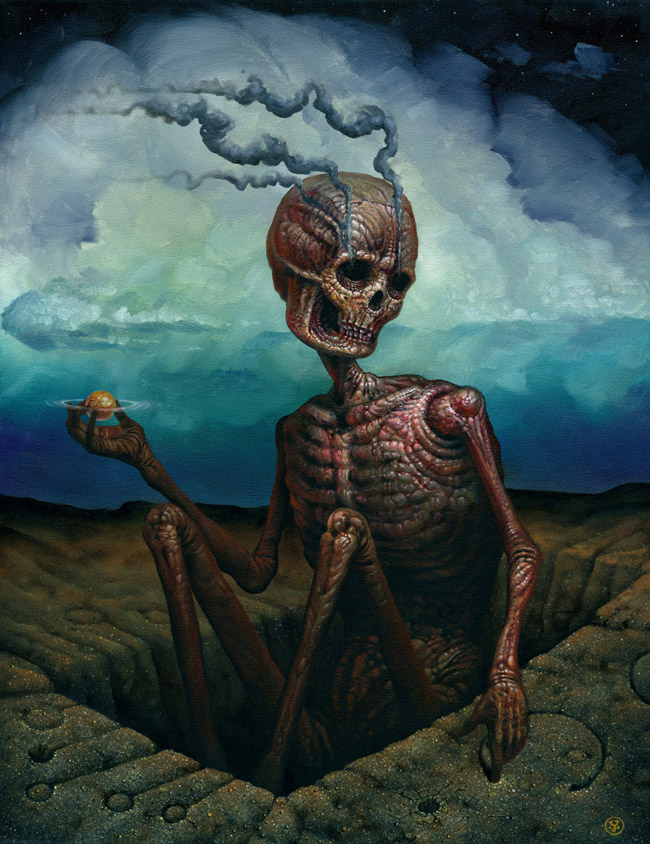 Hi Jeff! Thanks ever so much for freeing up some of your valuable time to have this wee chat with us, we really appreciate it. To start us off, if you would please introduce yourself, touching on anything you feel relevant to story of Jeff Christensen the artist?

I was born in Seattle, WA in 1976. My family and I moved to Helper, Utah when I was 8 after my parents split. Once we moved to Utah I started to draw. As a kid I loved cartoons and I wanted to be a cartoonist. I really found art to be an enjoyable outlet through which I could just let my imagination run wild, so I drew more and more. In school I’d fill my notebooks with doodles rather than notes. 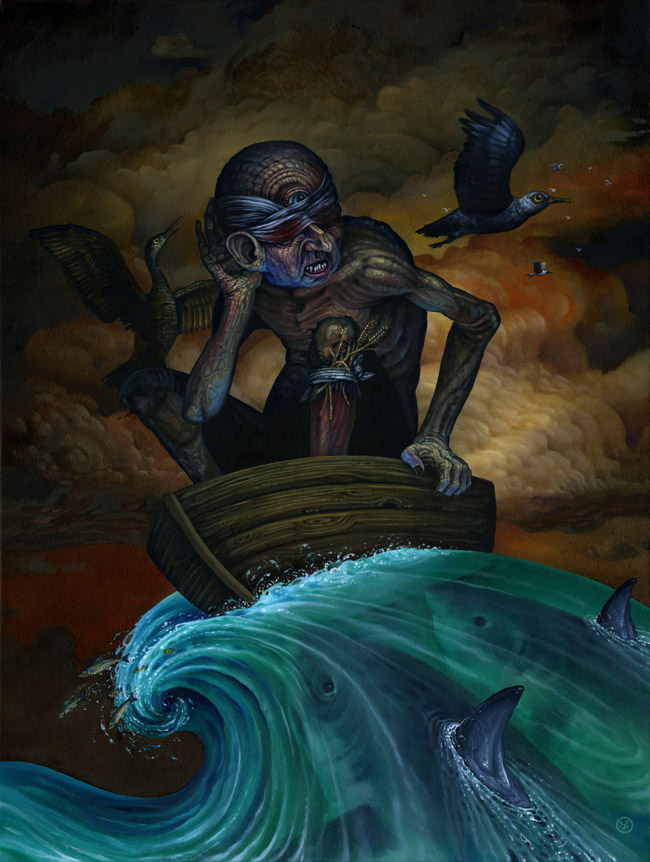 I live in a suburb of Salt Lake City, Utah. I like living in Utah because I’ve spent most of my life here. I like spending time outdoors and there is a wide variety of things to do outdoors here.

I do feel like I’m part of the community in a way. I’m not a very social person though. As for the art scene here, there’s really not much of one that is inclusive of the type of art I do. I’m sort of out in the woods with my art. There are some galleries in Utah but they show landscape and religious art. Any gallery that shows something different is rare here. I’ve shown in Utah but most of the showing I do anymore is outside the state. 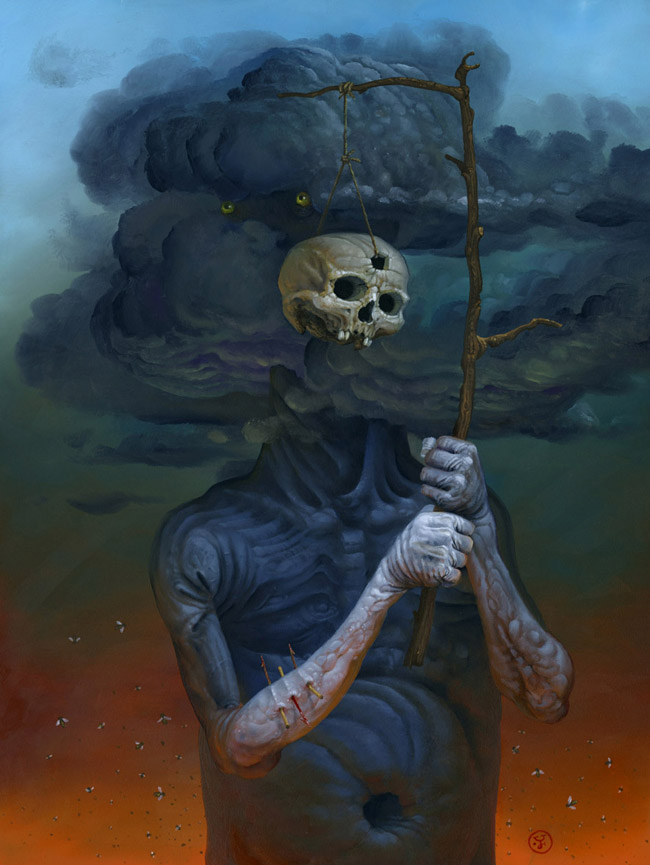 I think I was naturally drawn to art as a kid but I also think some of the events I experienced in my upbringing shaped the overall form of the art I do now. Art became an exploratory outlet for me. I was expressing things that were viewed as dark and not very aesthetic. I’ve always had a satirical wit and dark humor that I liked to work in whenever possible as well. People just viewed it as really twisted. When I was growing up there weren’t many other kids who could draw and there were fewer drawing the kind of stuff I was. Art became something that was my own thing that I was kind of good at.

How do you approach the creative process? Talk us through how you construct an image. Do have a concrete idea of what it will look like before you get started? What type of reference do you use?

I like to sketch my ideas out first. Sometimes I’ll do a quick rough sketch and I’ll be able to see in my mind how it will work out in a painting. Other times I’ll make three or four sketches before I think I have a basic idea worked out. Then I’ll start the painting with the sketch as a guide. I have a good collection of books that I use as reference when I need it. For the most part I’ll do my own interpretations rather than reference things. 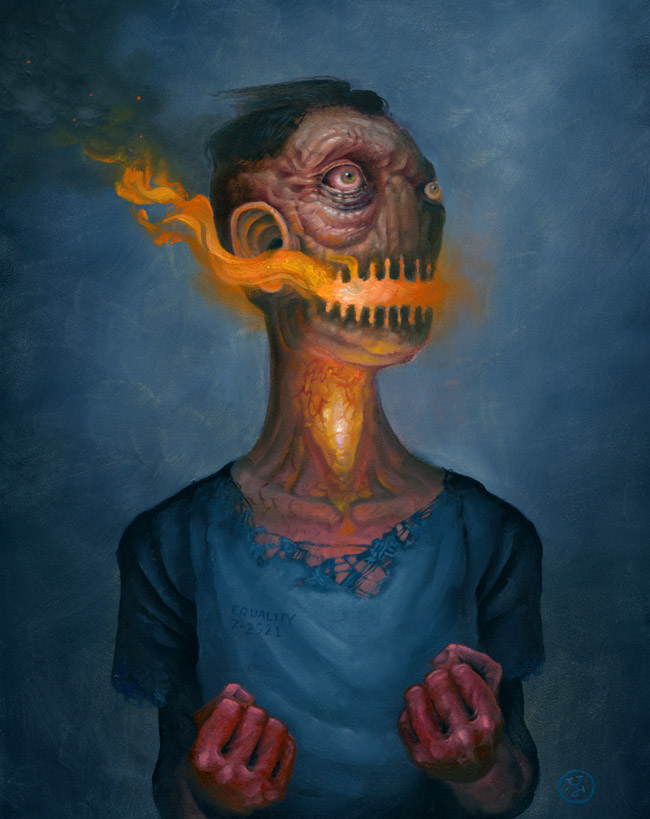 Your work appears to be a critique of what you feel is rotten within our societies, and within humankind as a whole; a cutting commentary on the social, political and religious problems that exist in our world. Would you care to comment on this statement and either elaborate on it or correct it, if need be?

That’s a correct assessment. I have a lot of problems with organized power structures whether it be religious, political or otherwise in which control is based on fear and ignorance. I have problems with the media and how they take advantage of people who believe whatever’s presented to them. I’m frightened by people who base their opinions off the evening news or unwittingly go along with the talking heads and celebrities on TV. I’ll watch movies and a handful of shows on DVD but I don’t watch Cable television because in my view it’s nothing but needless propaganda.

As an artist whose work contains a strong narrative element, can you let us in on what initially got you interested in visual storytelling? Also, what would you say are some of the most important ingredients that go into making a successful visual narrative?

I think as a rule art has to have some narrative element to be appreciated. Art is a language of symbolism that should visually convey an idea that the viewer can relate to or understand on a different level than other forms of art like, writing or music. I like art that makes me think, or that I can extrapolate scenarios from, or that can challenge my perceived notion of the world. 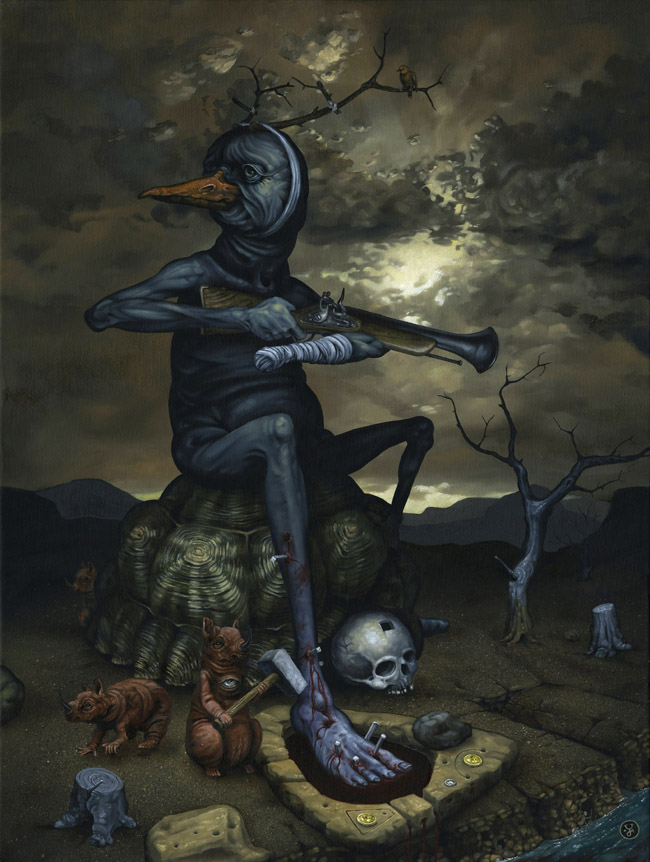 I’ve seen it evolve in a number of ways. I’ve seen it evolve technically from one painting to the next. I’ve also seen my ideas evolve (for the better I hope) and become more focused. I really started out painting in a completely different spot than I’m in now. A lot has to do with changing influences and also just a deeper understanding of my process, I’m always learning as I go. I take something learned from one painting to the next. 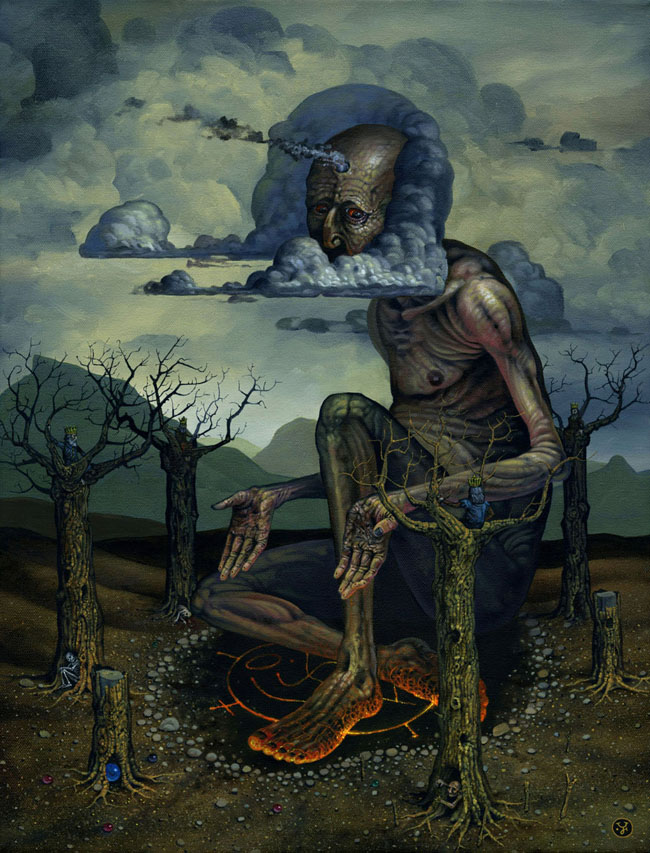 A large inspiration of mine is the music I listen to. I’ve been a metal fan most of my life. My ideas flow easier when I’m listening to music. I’ve also been inspired by certain authors.

What is the most memorable reaction anyone has ever had to your art?

I’ve gotten a lot of raised eyebrows and questions of why this or that, but the most memorable was someone asking me if the image in a certain painting was something I really wanted to see in real life. To me it was an absurd question, but the person asking was completely serious and a bit disturbed that I would try and manifest something that assaulted their eyeballs. I will also never forget my Junior High art teacher keeping me after the bell one day to ask me if I was on drugs. The stuff I was drawing at the time prompted her to do so. I wasn’t on drugs.

I don’t get influenced by the interpretations that people share. I get asked for interpretations of my own paintings on a regular basis but I’m not a person who’s good at expressing my ideas verbally, which is probably why I paint instead. I don’t like purveying my own interpretations because I find that it differs than those a viewer will take away from a painting. I’m OK with someone getting their own meaning out of an image rather than going along with mine. In that way I think they can connect with it more effectively. 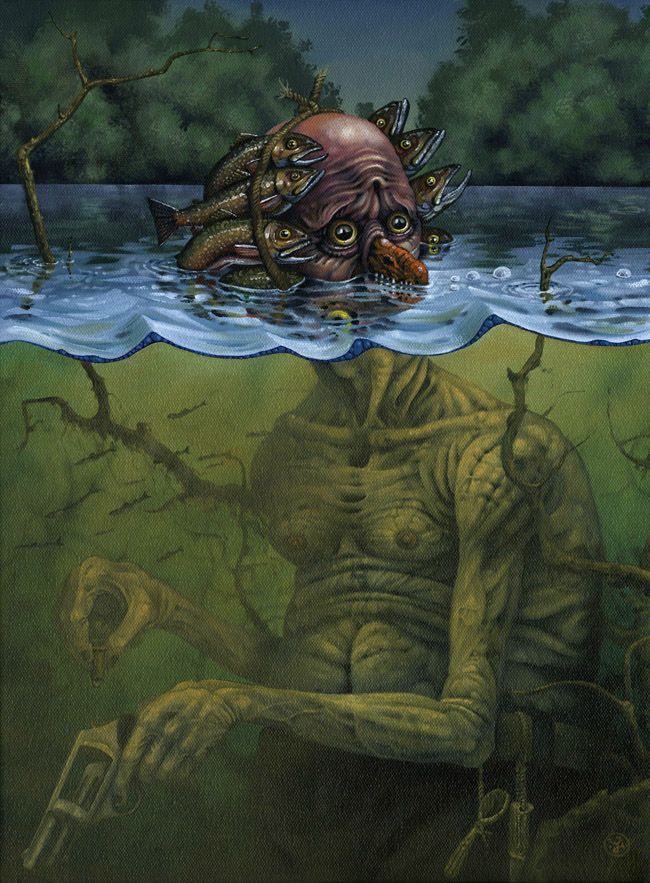 When I was in forth grade there was a janitor at the school that could draw the grim reaper really well. To my 10 year old eyes it was an amazing looking drawing. My friend who also liked to draw agreed and for quite sometime it was the high bar that we’d practice to emulate. We’d try and master the technique of the pencil lines which to make them similar the pencil had to be almost laying on it’s side against the paper making a wide grainy line. The shading was what really got me. I thought it was well done and I wanted to be able to draw like him. 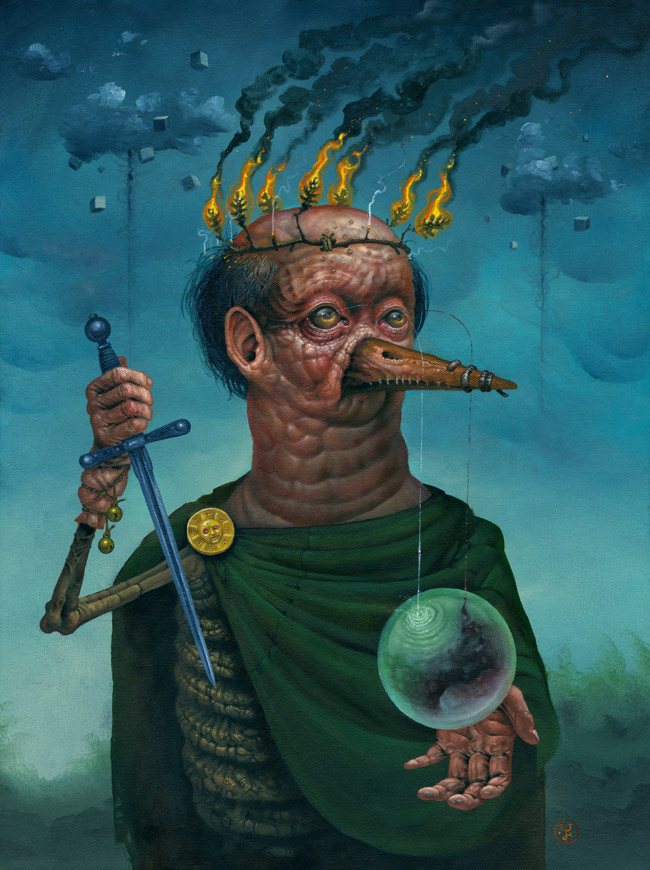 I really like a painting by Ludolf Backhuysen called ‘Ships Running Aground in a Storm’. The clouds on the painting are really nicely done. That would be one I could really enjoy looking at on my wall. I like clouds, I incorporate them into my own paintings quite often.

What’s next for Jeff Christensen?

Eventually I’d like to move from art as a hobby to career. Hopefully I’ll continue to be in shows and keep making art that people can enjoy in the meantime. 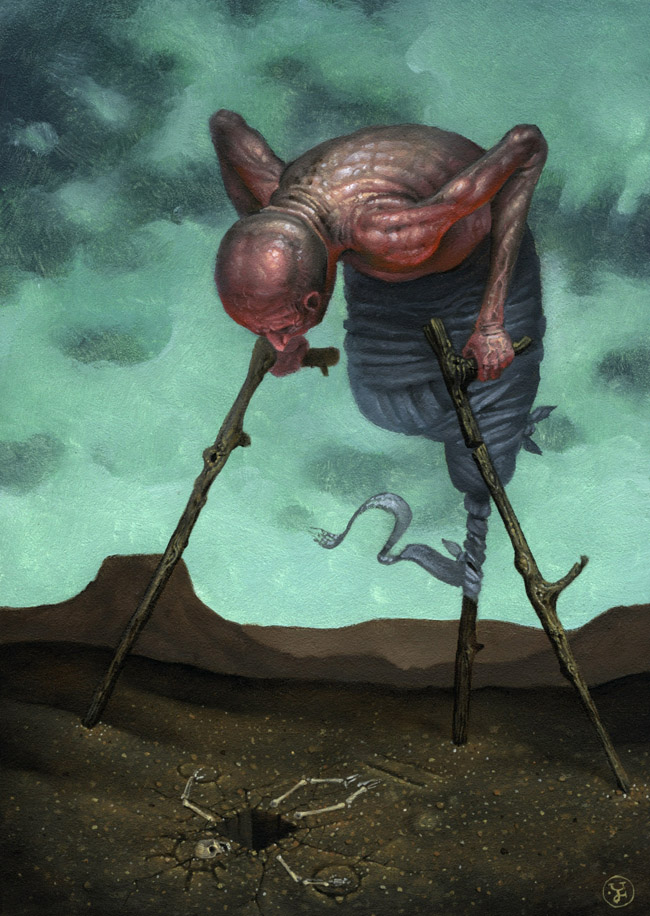 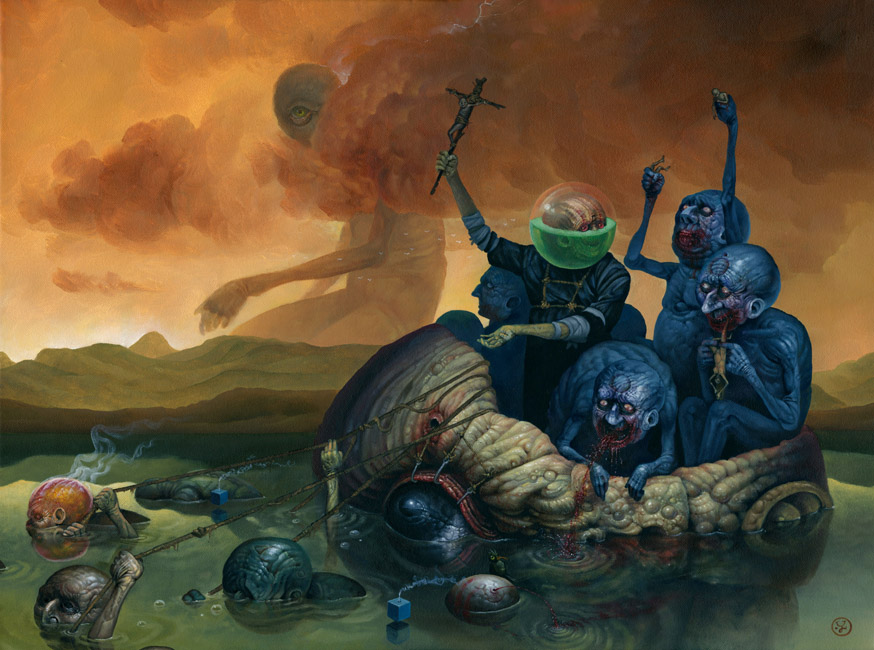 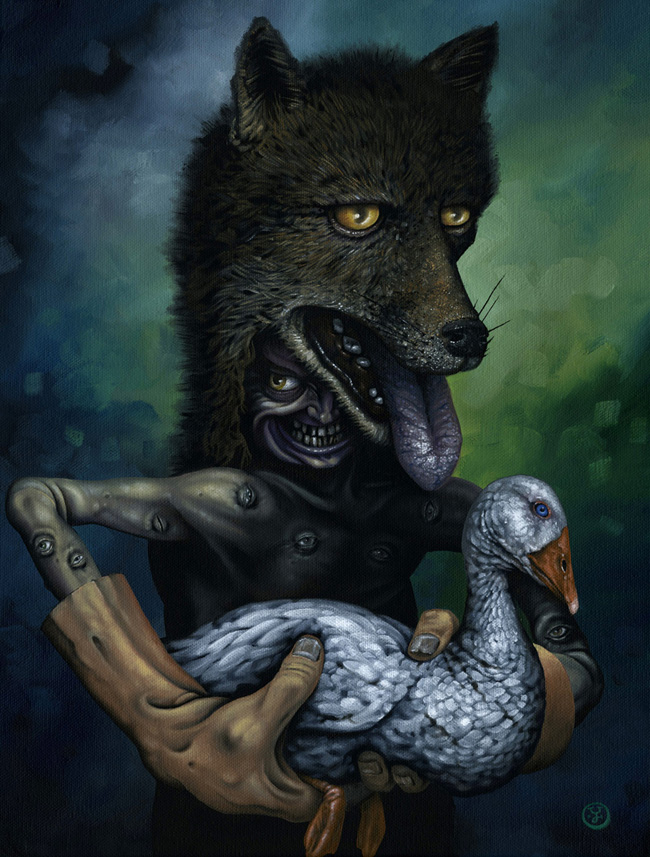 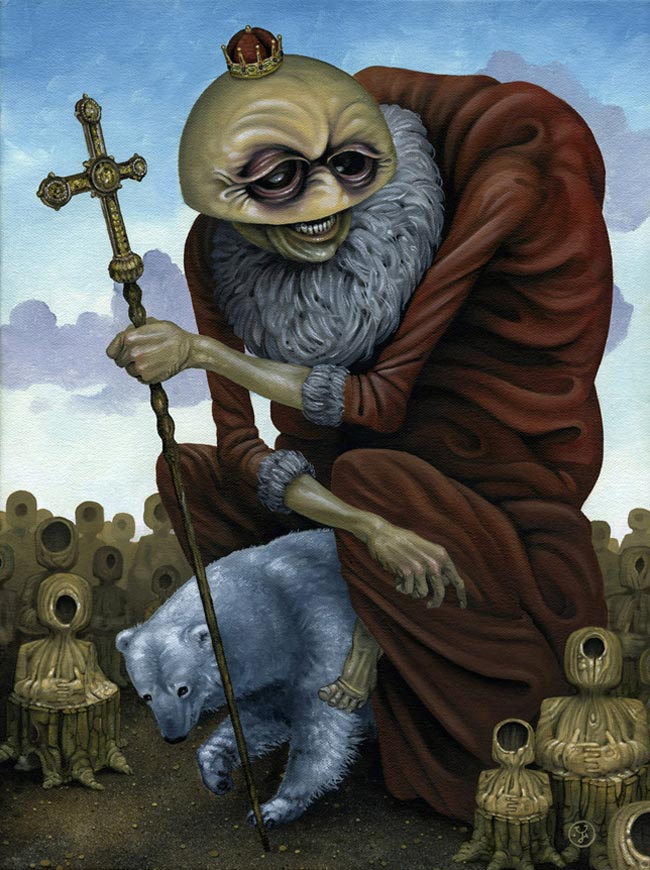