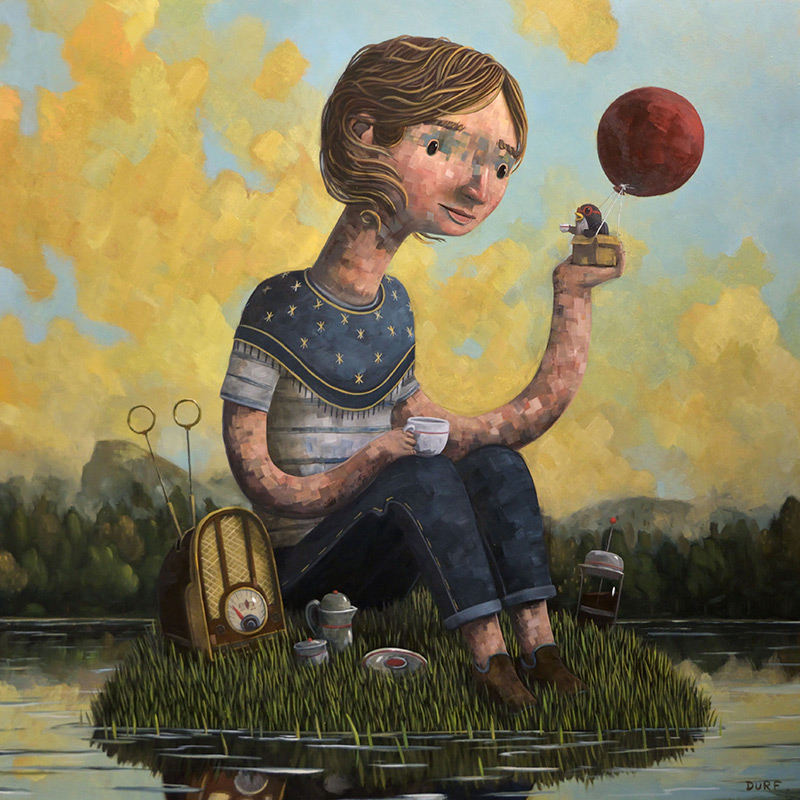 The characters and scenarios in evidence within the narratives of Nathan Durfee’s whimsical paintings, although at once familiar, also transmit mysterious frequencies and generate rays of delightful intrigue. In a nutshell, this really lies at the core of the success of Durfee’s work; aspects of the familiar attract us like moths to a lamp, encouraging fond memories to rise to the surface and the warm breeze of nostalgia to blow through our souls, while the mysterious undertones carry suggestions of the unknown, onto which we are invited to project our own meaning and ultimately complete the narratives by making them part of our personal stories. Durfee cleverly focuses his explorations on moments loaded with metaphor, philosophical observations, emotional connections and most importantly, human sentiments, making for joyous voyages of discovery and revelation.

Nathan Durfee was born in Vermont and is currently living and working in Charleston, SC. Nathan pursued a career in illustration after graduating from Savannah College of Art and Design in 2005, contributing to various publications, designing album art and creating commercial promotional materials. Nathan was then compelled to explore his love of painting and in 2009 he made a seamless transition from illustrator to full-time painter.

WOW x WOW is exceptionally honoured to have a brand-new painting by Nathan in our current online group exhibition of square artworks: WOW². ‘Coffee Before the Flight’ is a fantastic piece from Nathan’s ongoing series of works exploring the idea of islands as locations for self-contained narratives. We hope that you enjoy the following exclusive interview, in which Nathan provides insight into his wonderful creations. 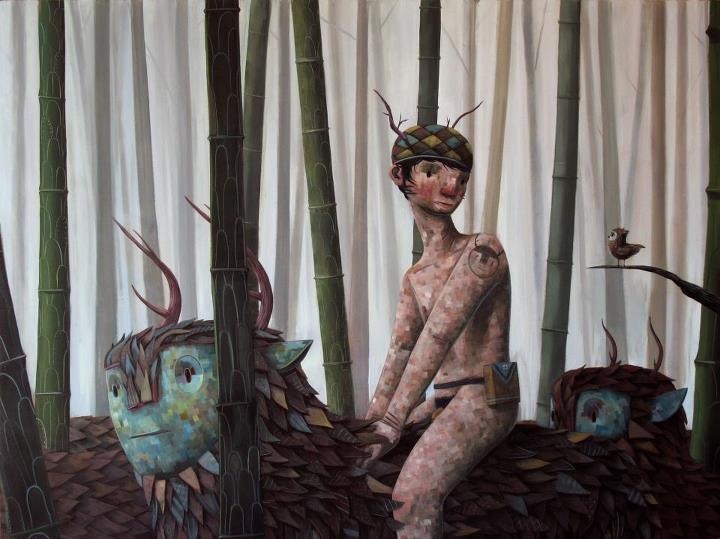 Hi Nathan, thanks very much for making the time to have a chat, we really appreciate it. To get us started, can you give us some background on what has lead you to this point in your professional life, be it your formal training, serendipity, etc.?

After graduating with a degree in illustration, I was working full time at a menswear company doing graphic design. I was trying to find illustration jobs in my off time, but wasn’t having any luck, so to keep myself busy I made personal pieces that looked like book illustrations. Then, while seeing an improv show at a local theater, I talked with the owner who was looking for artwork to hang in their hallway. After 6 months of showing my paintings at the theater, I was noticed by an art gallery who wanted to represent me. That was 10 years ago. 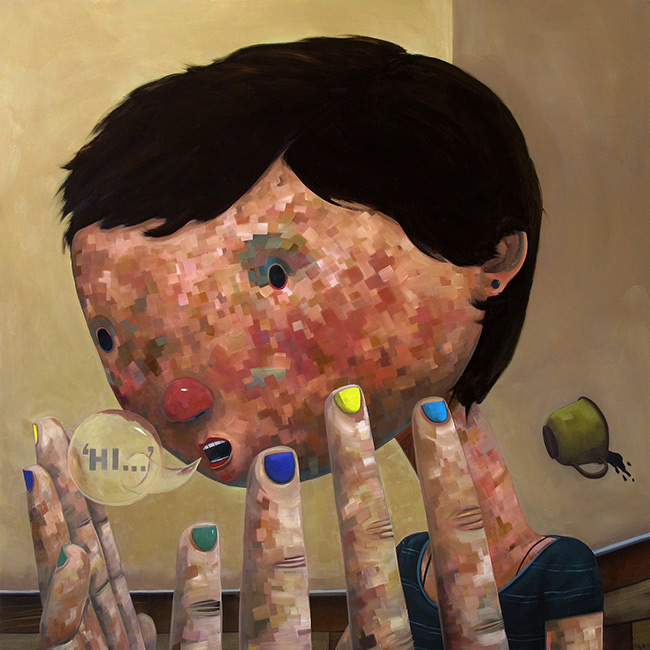 I wasn’t exposed to a lot of fine art growing up, but I was encouraged to draw and express myself. I figure it was a good way to keep me out of trouble. I also grew up playing a lot of sports: soccer, skiing, cycling, gymnastics. These sports (some of them I kept playing and competing in through college), gave me a sense of dedication and a work ethic that I translated to my pursuit in the arts.

Where does your sense of community currently stem from as an artist? Do you feel part of a close-knit scene in your home city, or do you connect more with other creatives online? Is community something that is important to you and your creativity?

Community is important to me. There is a close-knit scene of artists in my home city, Charleston, SC, and we try hard to help each other as well as the city. We are our muses as well as support group. 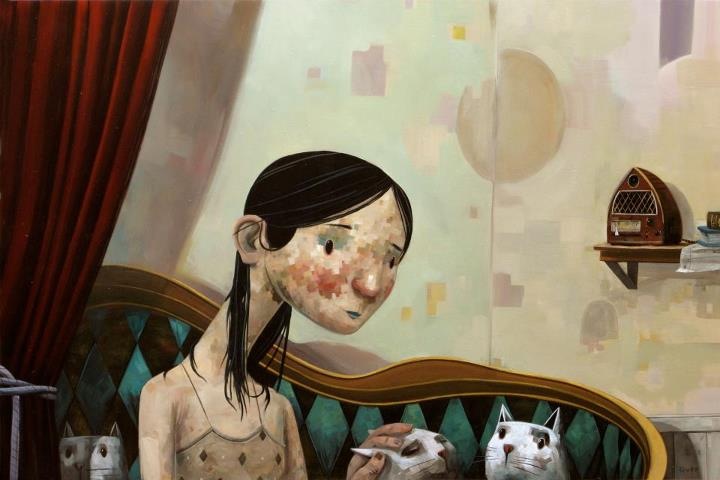 How do you approach the creative process? Talk us through how you construct an image. Do have a concrete idea of what it will look like before you get started? What type of reference do you use?

My creative process can be described similarly to an improv scene. I do not have a concrete idea going in, just some vague emotions and thoughts. I lay down abstract marks, then I become inspired by the shapes they’ve made. Shapes become characters, characters fill the scene. When creating larger paintings, I follow a similar process but I sketch out an idea digitally on an iPad and project the final concept onto the canvas. 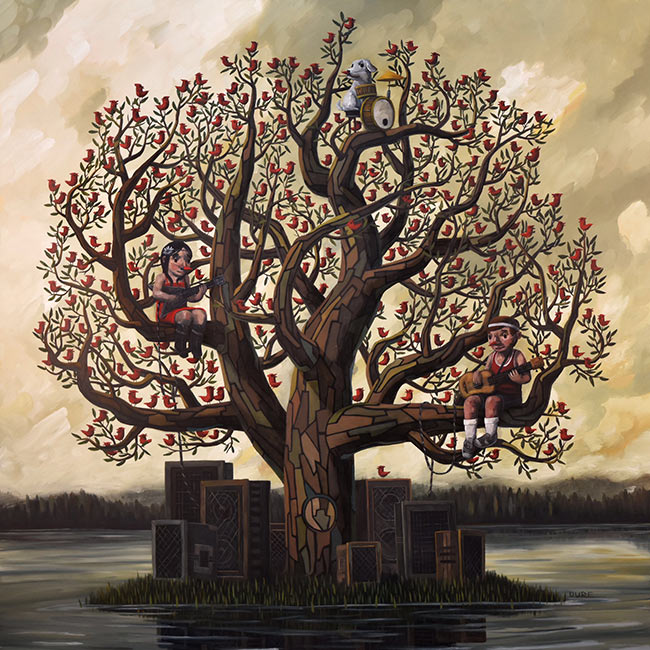 We’d love for you to share some thoughts about the current themes you’ve been enjoying exploring through your art.

My latest body of work is focusing on islands that are self-contained narratives. The setting is an amalgamation of the Mountains of Tahoe (where my family lives) and the Lowcountry of Charleston (where my community lives), but it’s more of a consistent backdrop to allow me to focus on characters and narratives.

As an artist whose work contains a strong narrative element, can you let us in on what initially got you interested in visual storytelling? Also, what would you say are some of the most important ingredients that go into making a successful visual narrative?

Growing up reading children’s books and comic books, my early exposure to art was illustration, and since my formal training was in illustration, my work has been entrenched in narratives. For my narratives, the most important ingredients are the contrasting elements. If a painting is entrenched in sadness, add some beauty. If it’s looking too happy and calm, add some fear or mania. This balance brings depth, and let’s the viewer know that the story isn’t always revealed in the first read. 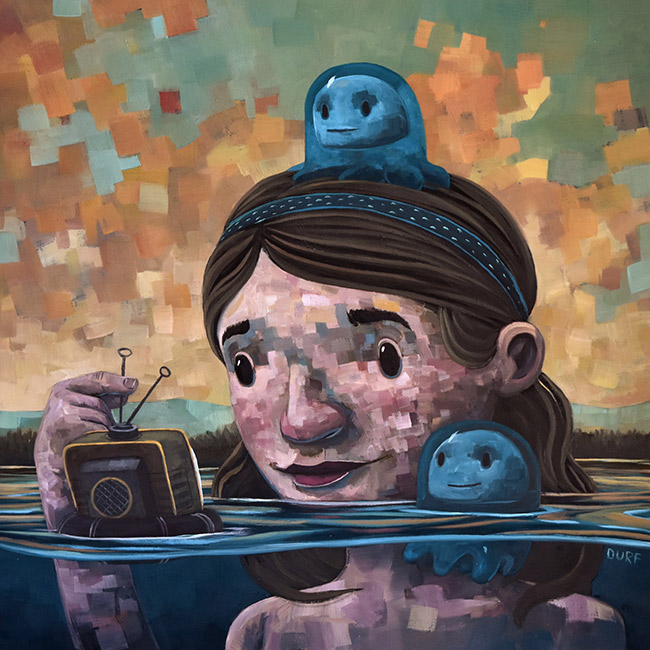 Sticking with the concept of narrative for a moment longer, the characters you create and the stories they tell have a distinct air of ambiguity. In what ways is it important to you that the ambiguous aspect of your imagery and symbolism be allowed to flourish? 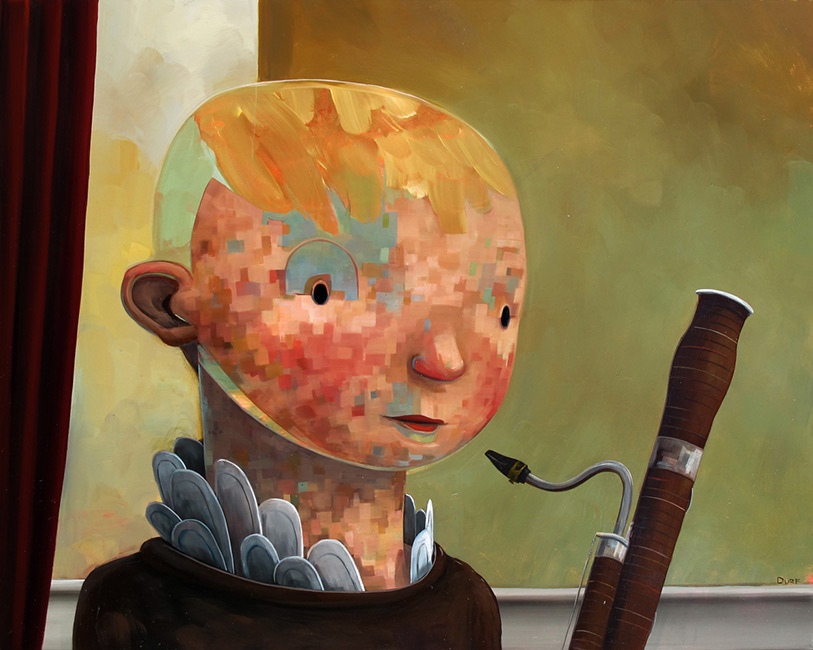 Can you tell us about some of the greatest breakthroughs you’ve experienced within your learning as an artist? Those moments that have opened up whole new creative avenues or that have led to you taking large leaps forward in your development?

One of my biggest breakthroughs was letting go of the eyeball. I used to be fixated with those ‘doorways to the soul’ (I almost gagged writing that). I’ve since learned to convey the emotional depth and focus with just a dot. The benefits have been threefold: It makes even my creepiest characters seem endearing, it’s also an excellent way to avoid the uncanny valley, and it also makes my characters more universal and less portrait-y. Another breakthrough has been my patchwork/pixelated style. Early on my paint application was informed by Impressionism and Fauvism: Swaths of contrasting color. As my work evolved, these shapes tightened up into the squares I’m known for today. It’s given me some real push and pull when playing with rendering. 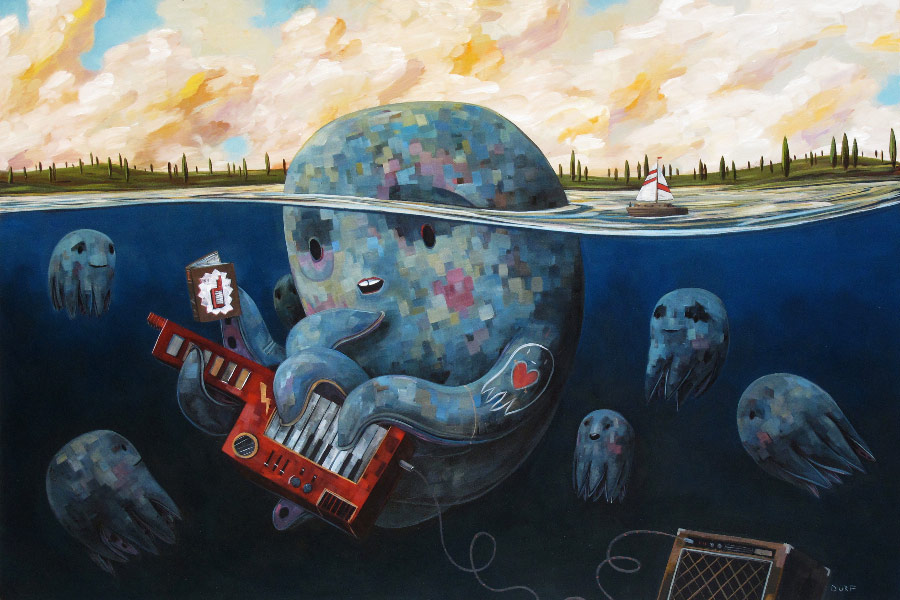 How accurate would it be to say that nature and animals provide you with inspiration? In what ways do you think about nature in the context of your art?

I love nature…but it’d be inaccurate to say that it is a source of my inspiration. I’m inspired by people and their relationships with one another; but depicting people as animals makes them more appealing to other people. A lot of times animals transcend age, gender, and race, which gives a broad audience the ability to place themselves into the character.

What has been the most exciting life and impact you have you witnessed any of your art take on after leaving the confines of your studio? What kind of feelings do you have about letting your creations go and live their own lives in the big wide world?

I have a few friends who have gotten tattoos of my paintings, which blows me away because I’ve never gotten a tattoo myself. That being said: I wrestle with the amount of caring I have for my pieces once they’re completed. I try really hard to focus on ‘painting’ the verb, and let go of ‘painting’ the noun. 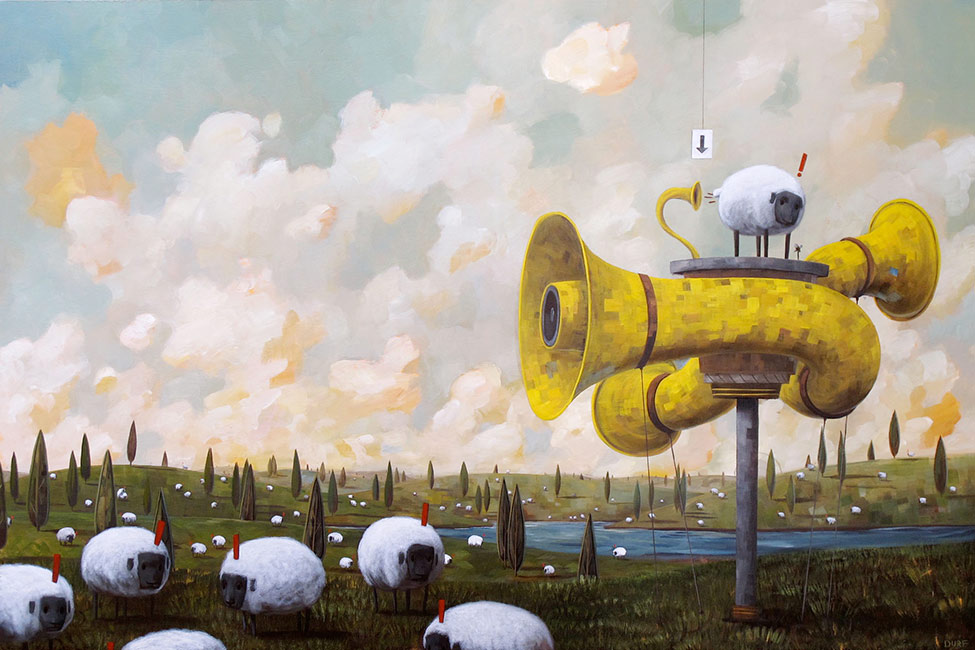 I spent a lot of my teens doing tricks on snow skis: flips, spins, grabs, sometimes combinations of all three. There really isn’t a safe way to try a new trick, you just go for it. Failure was common and often painful, but each crash came with a lesson. I try to tackle my paintings the same way; jumping in without fear and seeing where it takes me. 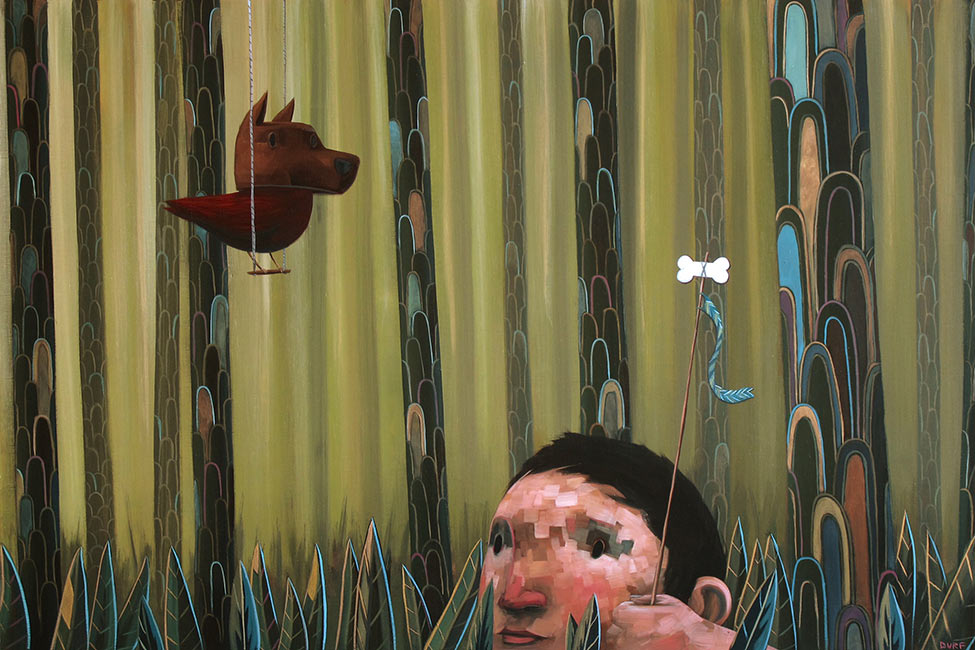 What’s next for Nathan Durfee?

I have a solo show coming up at Robert Lange Studios in December along with a follow-up show in June. After that I’ll probably take a nap.

Nathan Durfee – ‘Coffee Before the Flight’ 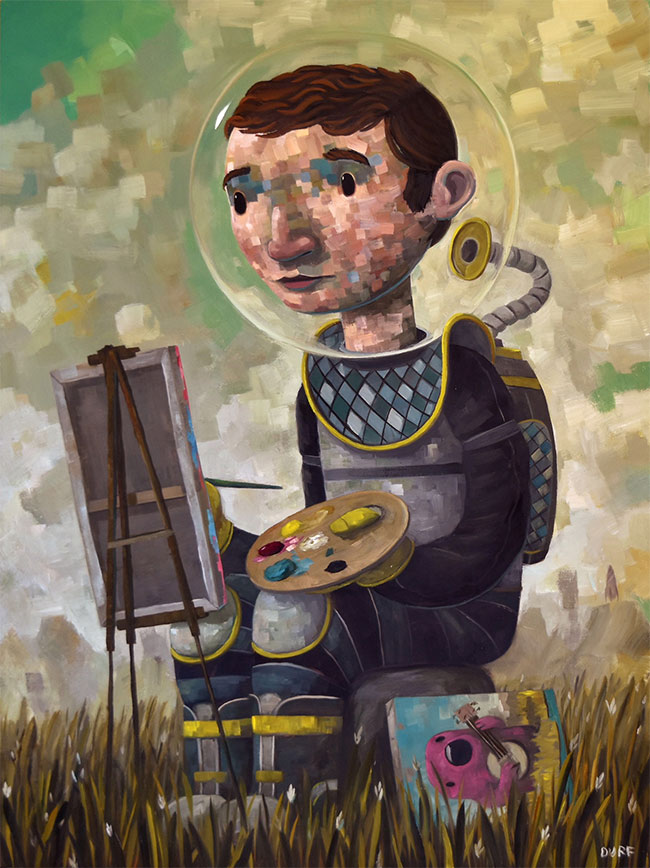 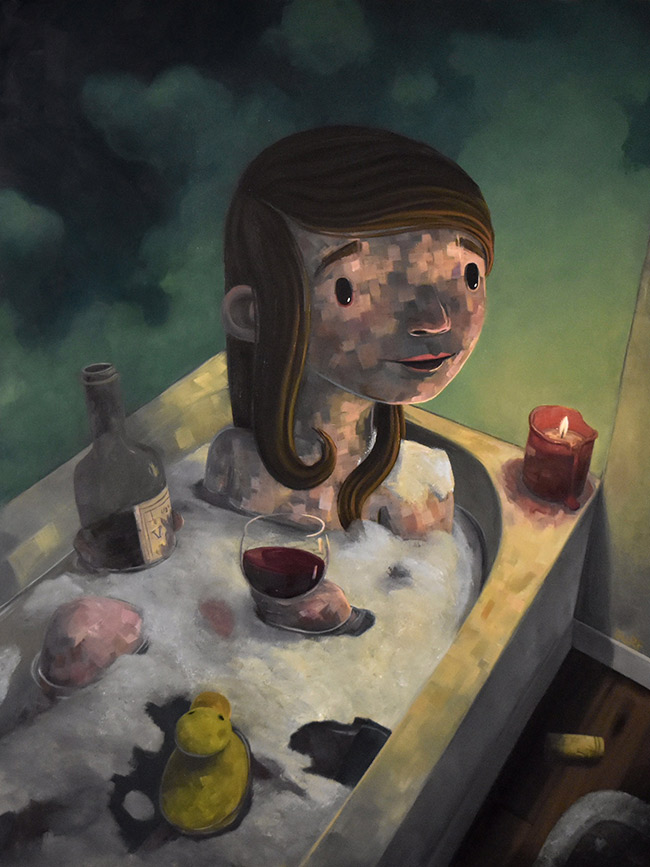 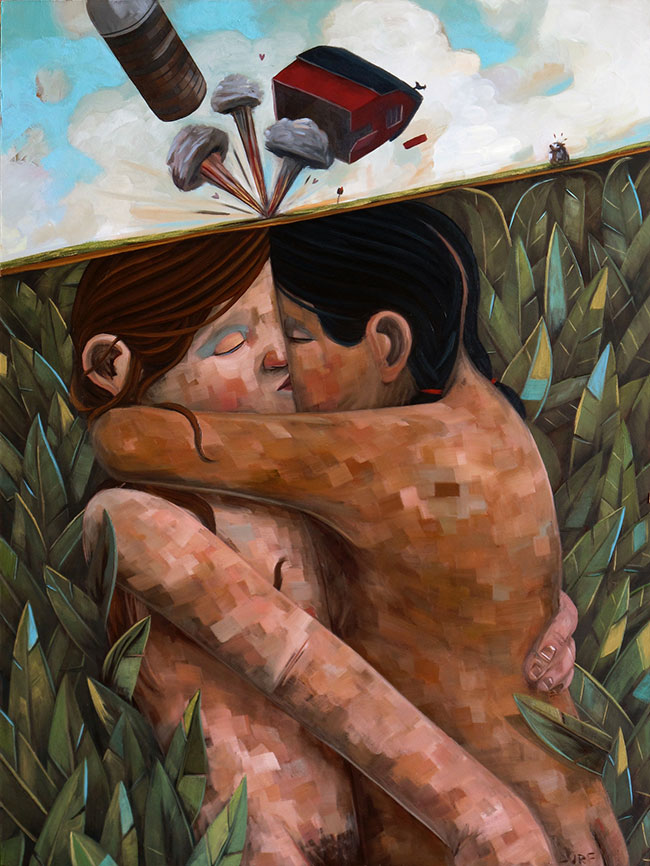 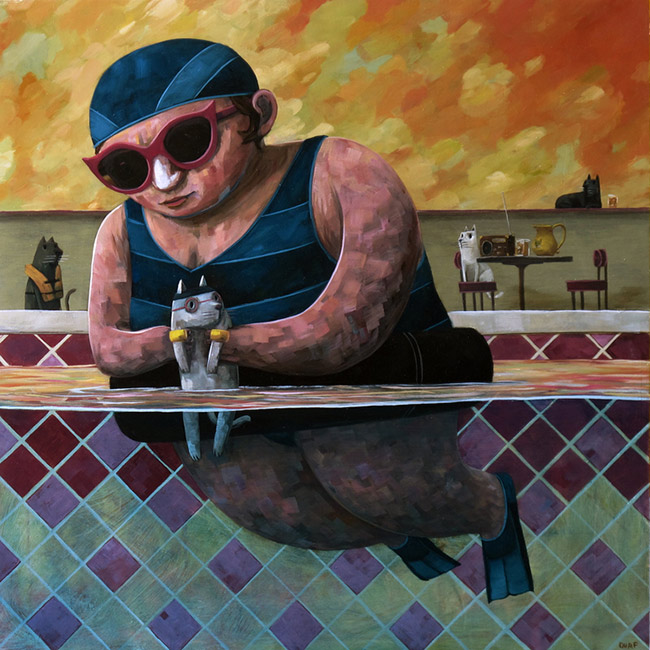 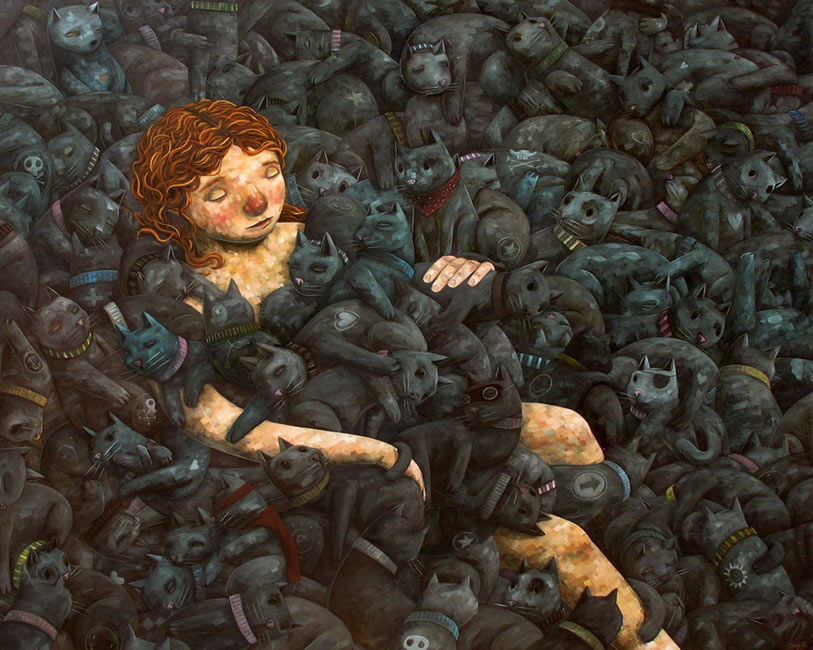 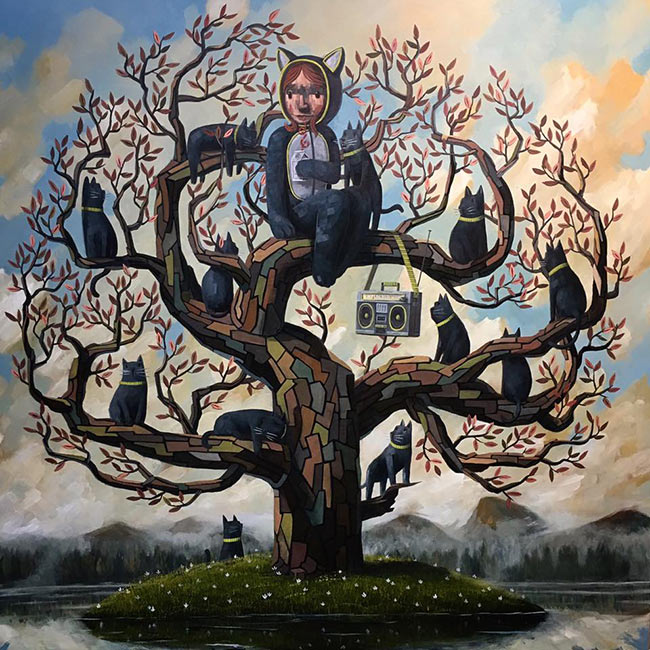 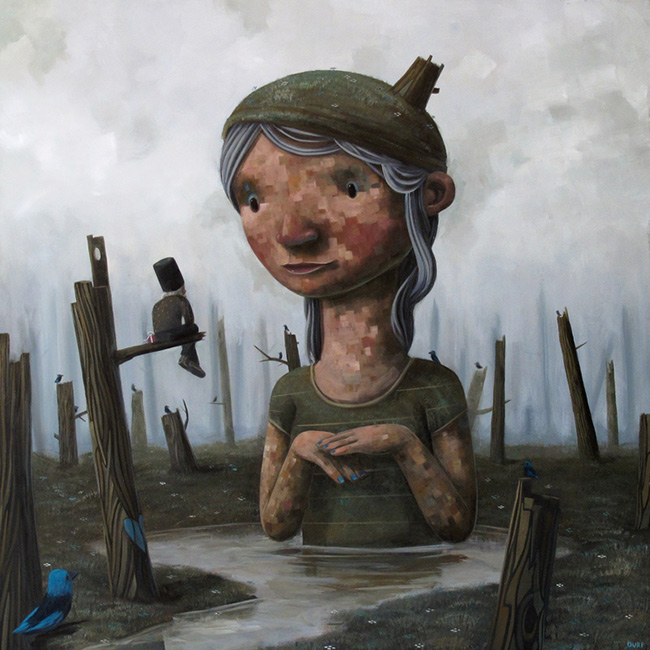 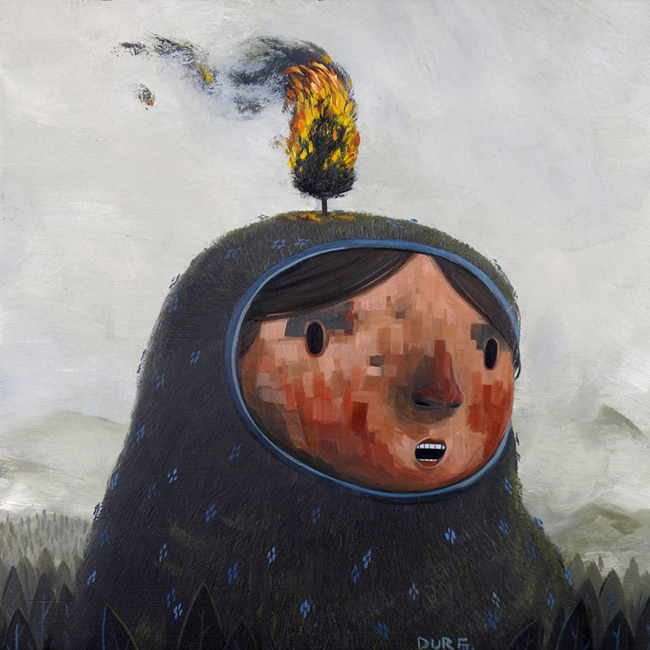 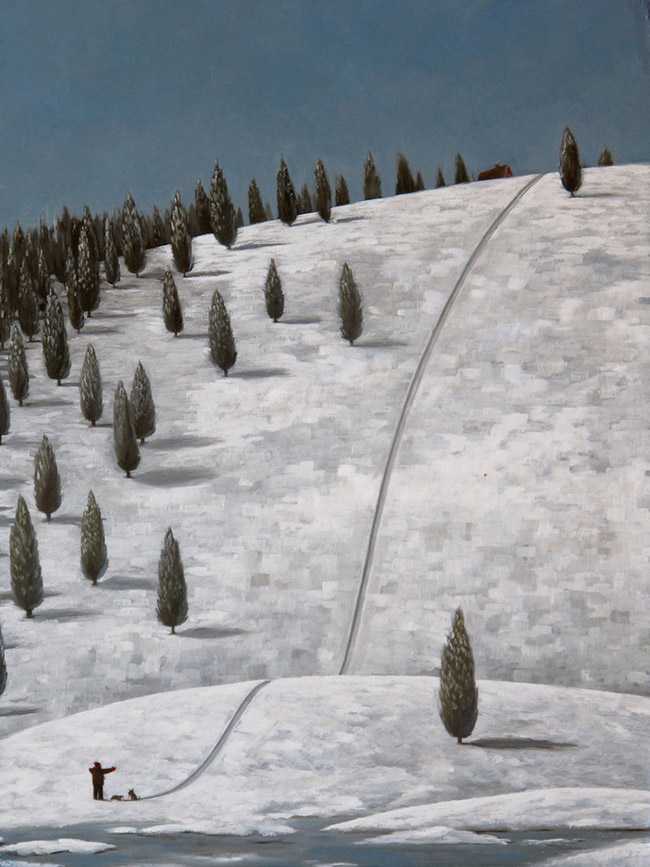 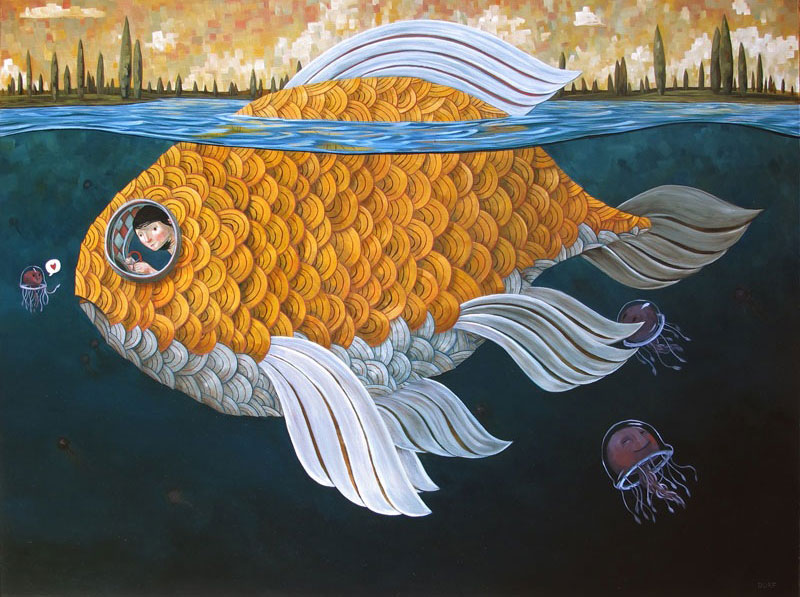 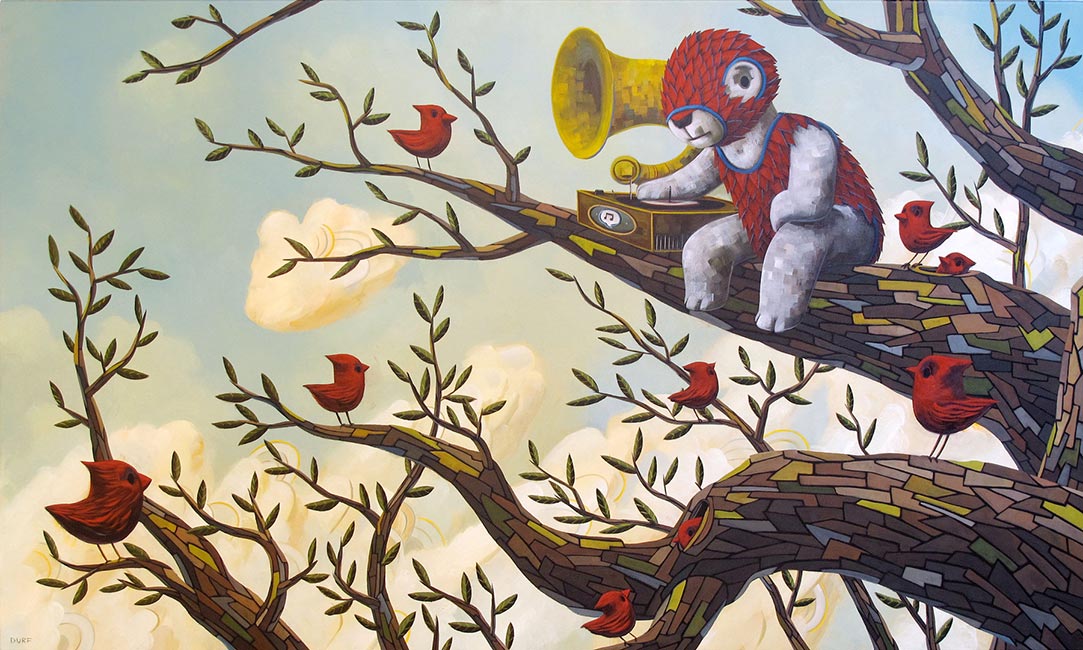 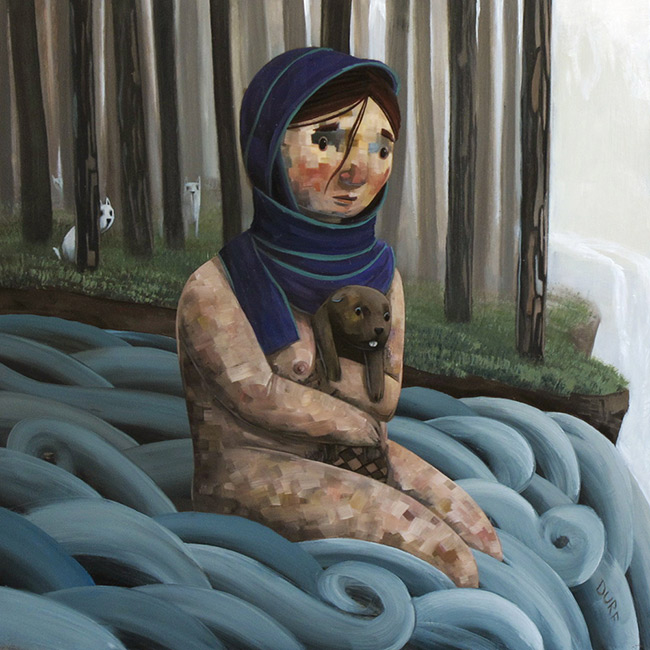 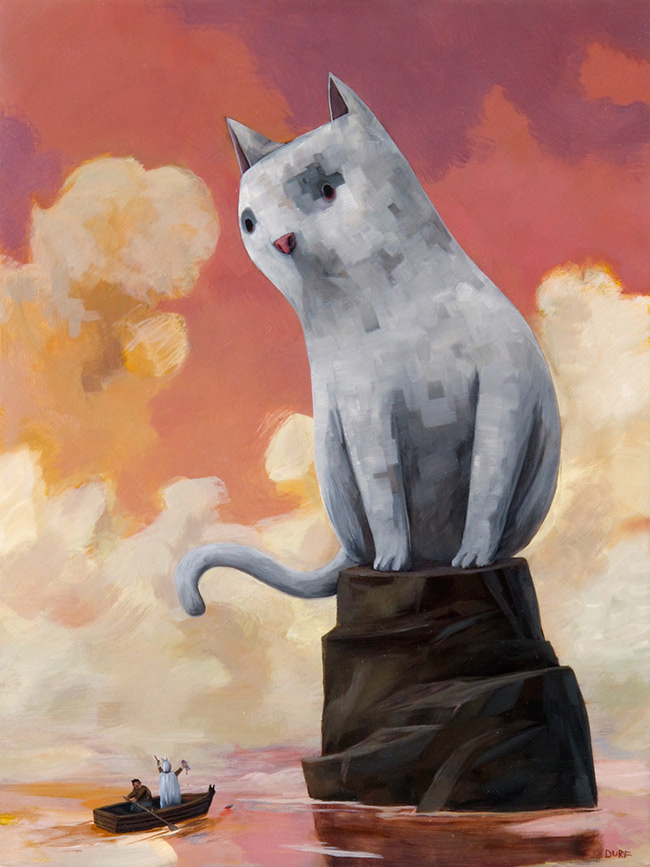 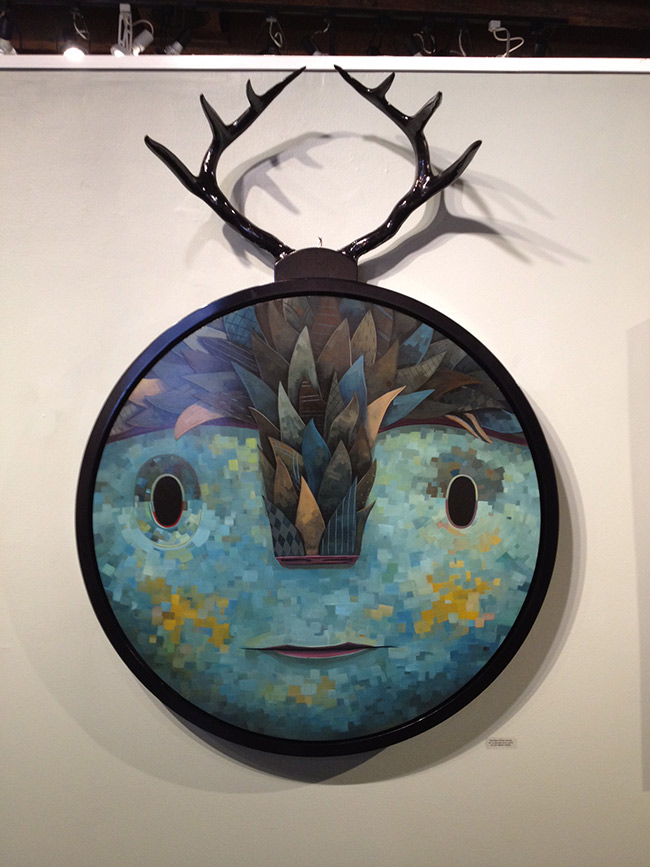 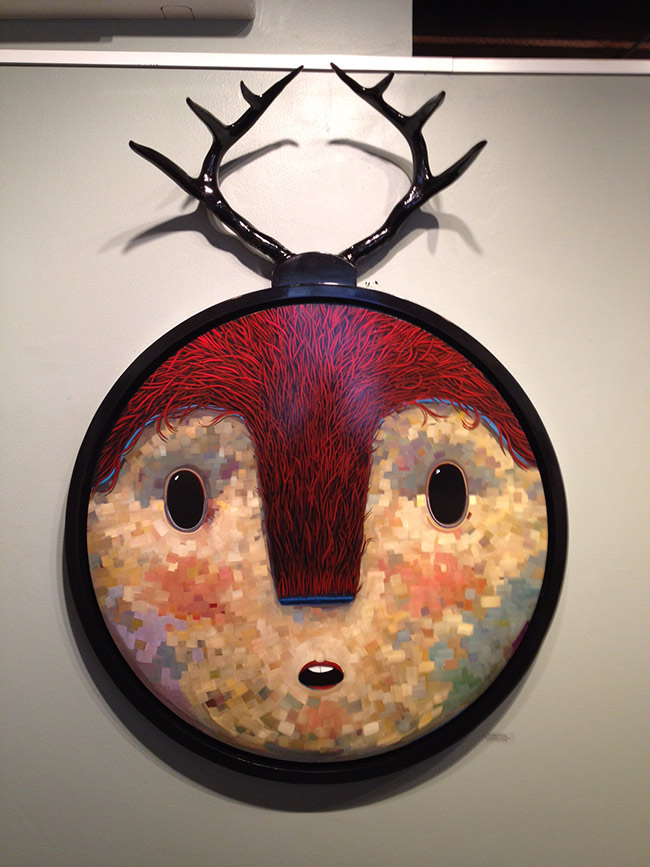 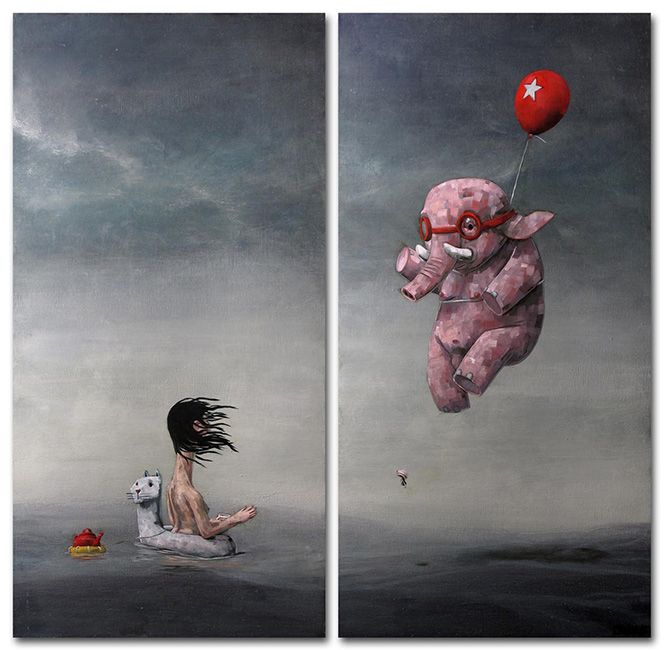 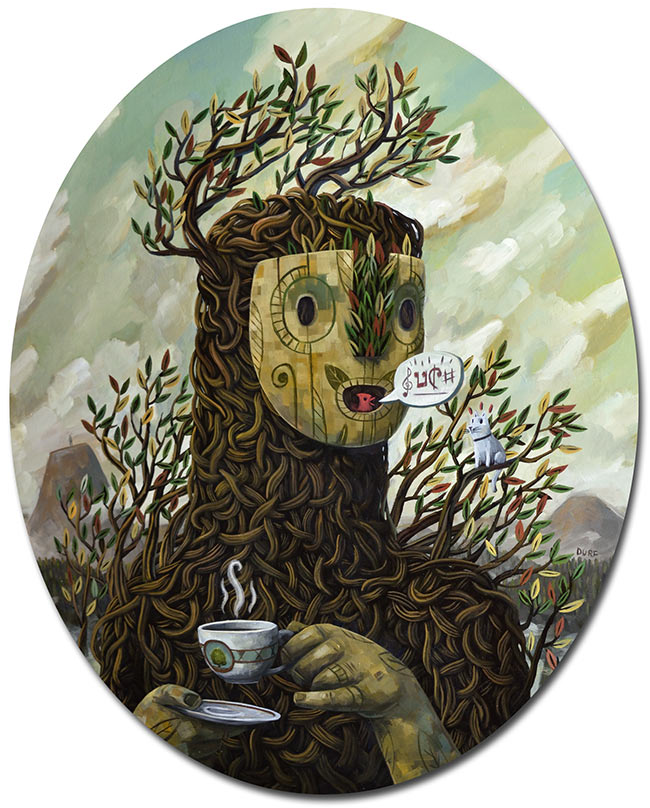