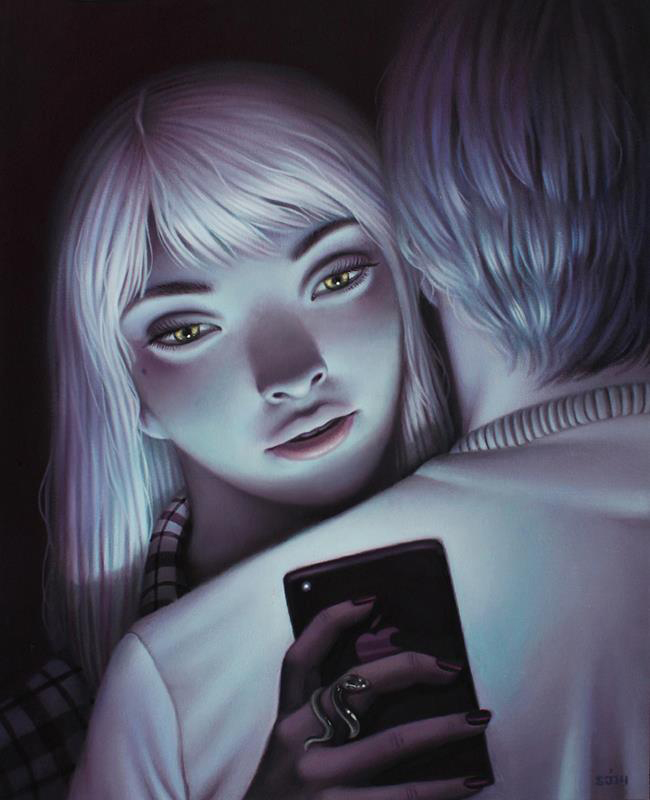 Sarah Joncas is an exciting talent from Canada, whose rise within the New Comtemporary Art world has been nothing short of meteoric. Joncas is a recent graduate of Ontario College of Art and Design, but before she had even graduated her work had attracted the attention of top galleries in the US. Since graduation she has gone from strength to strength and has now exhibited her mysterious character driven paintings throughout the world.

WOW x WOW recently caught up with Sarah to discuss her life and work as an artist.

Firstly Sarah, can you tell us a little about where you live?

I am currently living in Mississauga, a large suburb just outside the city of Toronto. I had been living in Toronto for 6 years previously, but it just got too pricey. Now that I’m living 20 minutes outside the downtown, I can afford to have a second bedroom which I’ve turned into a studio – surprisingly, the first time in my life where I haven’t had to paint and sleep in the same room! I also finally learned how to drive, which is rewarding and not something that was practical for me in Toronto.

How important do you feel your formal training at Ontario College of Art and Design was to the shaping of you as an artist?

Despite some disdain I hold for my education there, OCAD was huge in my development as an artist and a person. Technically the school didn’t teach me much, but academically it changed a lot of the ideas and concepts I carried in my work. The fact that I originally came from a city that didn’t even have an art store to buy supplies from, Toronto was a candy store in comparison. Art galleries, art stores, artists and art students – it was a community I hadn’t much experienced before and I think that may have been just as, or possibly more, beneficial than the actual education I got there.

Many of your paintings have a cinematic quality with a distinct narrative flavour, which you often use to create atmospheres of melancholy, anxiety and suspense. What were the initial sources of inspiration that led you to develop an interest in this particular type of visual story telling?

To say they’re cinematic is very on point, because film and photography, especially as of late, have been a big impact on my style. I love the look of noir films and the emotion I feel watching a good suspense, psychological thriller. Growing up, I tended to border on this line between fine art and illustration as well. I always liked images that told a story! I love that pregnant moment where you sense something is about to happen, something dramatic and dark, which is certainly the feeling I’m looking to achieve in some of my pieces. Though I do enjoy a joyous movie or song here and there, I’ve tended to be drawn to the more melancholy in the end. The shivers and creeps it gives you, the lingering emotions and pensive thought. It’s kind of fun in a sinister way. I think melancholy stories, songs, and art just seem to be cathartic for me though. Whatever dark energy I seem to harbour, being able to paint it out is a great relief. Even if you aren’t necessarily painting autobiographical images, your own emotions and feelings are a large inspiration to what you’re creating. Painting as a teen and young adult, my artwork was quite a bit darker too. All that angst you have growing up, I don’t feel that quite so much anymore, but I’ve grown a taste for looking at and making images with those moods over the years. 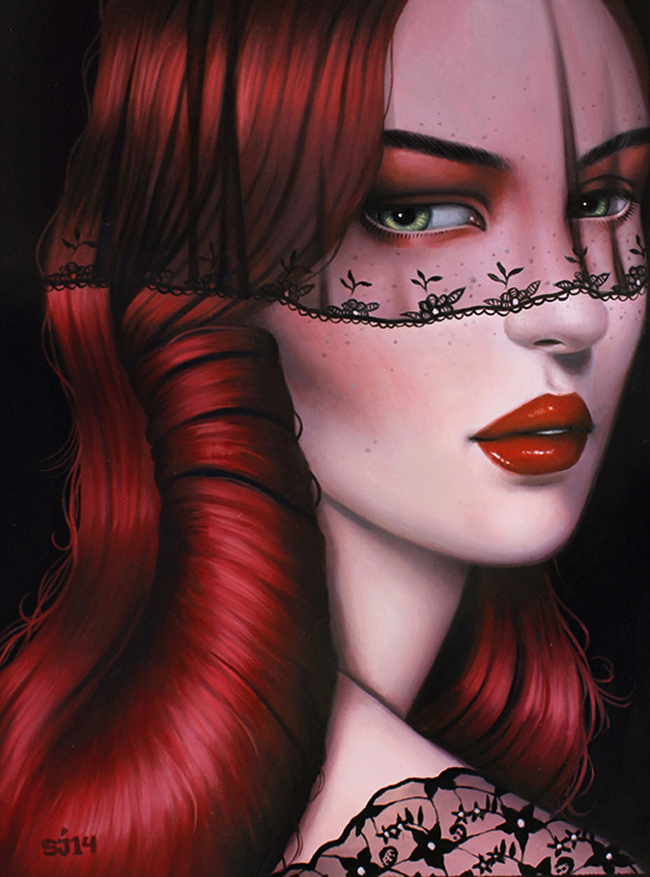 You make very effective use of light in your paintings, utilizing exaggerated patches of light and shade to control the viewers gaze in a manner reminiscent of old noir movies. What was it that initially turned you onto noir and what are some of your favourite examples of the genre?

I think most of that influence comes down to some neo noir movies I watched in my teens, especially films like Mulholland Dr. and Blade Runner. I always loved how effective use of light was enough to completely change the atmosphere of a scene. Ridley Scott was the master of it with that movie. The noir lighting always signifies that something sinister is taking place. Could just be a person sitting on their couch reading a magazine, but if you shadow half their body, the viewer can sense something is about to go down. I love that combo of the mundane with the suspenseful. Other artists inspired that fascination from me as well, Edward Hopper, Greg Crewdson, Cindy Sherman, etc.

Your work contains an abundance of symbolism. Do you prefer to create your own personal symbols or do you draw from a more universal symbol bank?

Both really. Lately, I’ve probably been using more universal symbolism though, ones that I draw from literary, cultural and biblical sources. I think my work has grown less and less personal over the years as well though, wanting to express concerns and ideas that are maybe more social, environmental and/or political. I like using animals the most to convey symbolism; butterflies, snakes, fish, birds… Animals have always been great fun to paint, but they also have long cultural histories. And they have that connection to the natural world, somehow bridging a gap between my figures and their environment.

You have predominantly painted women in the past, but for ‘Snake in the Grass’ your recent solo exhibition at Subtext in San Diego, you incorporated some male characters. What brought about this change for you and is it something you wish to explore further?

I shied away from male figures in the past because I found they always looked very feminine when I tried. I also felt a lot of stress about painting men, as though I couldn’t understand the male perspective and didn’t have the knowledge to truthfully express it… However, my technical skills have levelled up a tad from my beginnings and it’s something I’ve wanted to work on for awhile now. Male portraits are not nearly as popular and sellable as females, sadly, but as long as I can paint one up here and there and get better with them slowly, hopefully I’ll find a market more accepting. I currently have a couple males in the works and plan to do more still. 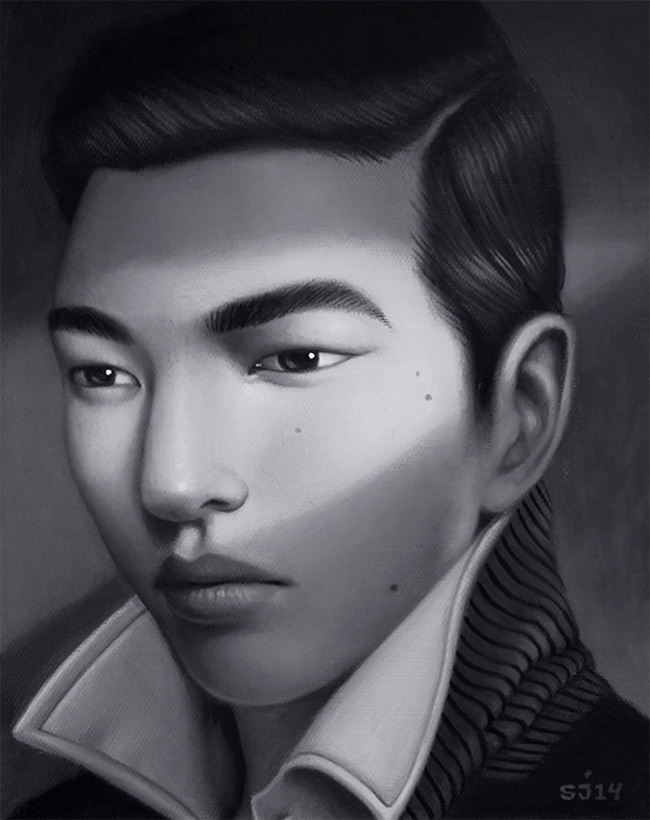 The titles of your paintings can at times be very direct and on other occasions more ambiguous, leaving the narrative open to the viewers own interpretation. What emphasis do you place on your paintings titles and what intention do you have for them?

I’ve never liked naming my pieces, it’s a tad stressful not knowing if they come off properly or sound corny. Sometimes they just click though and I’m quite happy with the title, even coming to find them beneficial to the image. I draw a lot of from popular culture, especially from music I may be listening to while painting. I also love using phrases and idioms because there’s a lot of punch to them. Simple and poignant. They seem to be like titles to a clever moral fable, one which illustrates a bit of what I’m going for in the work.

You have previously said that Frida Kahlo is an artist that has provided you with a wealth of inspiration. Tell us a little about why she is important to you and what elements of your own work have been inspired by hers?

She was a great inspiration to me as a teen. At a time when I was really looking to explore the introspective and personal, her work was a perfect example of that. A wonderful and twisted sort of imagination too! I loved her dark and surreal imagery. Not to mention that throughout art history there were very few female role models to look up too. Women just didn’t get the same kind of attention or support as men. I think her personal struggle and passion as well, painting through thick and thin, it reflected a drive I also felt to continue on with my work and not give up despite the unlikelihood of going very far with it.

What are your thoughts about the New Contemporary Art movement and what are your hopes for it’s future?

I’m not very involved in the high art scene, but looking out at the world through the eyes of the internet, it seems anything goes! And I love that. Art movements and art critics always seemed to dictate what was popular and what was meaningful in the past, but now I see people creating everything and anything without those obstacles. The stereotype of the starving artist seems silly nowadays, as well. Though still a financially unstable career, the world is your market anymore. I can sell work through an online shop and have people from Canada to Australia purchasing it, no middle man or manager. I suppose there will always be trends though, imagery and ideas that are contagiously popular and sell better than others, but I don’t feel there’s a need to please that particular audience. I happily paint what I want to paint, despite profs and/or intellectuals trying to convince me that representational or figurative work is ‘dead’. I suppose my future hopes would be that things continue on that path. There are obviously pros and cons to internet, as the film and music industry deal with too, but overall I feel a great more accessibility to art and the art world nowadays. And with how much of our lives are experienced via the digital world and screen, hopefully it creates a greater respect for the original and the handmade, and not the opposite. 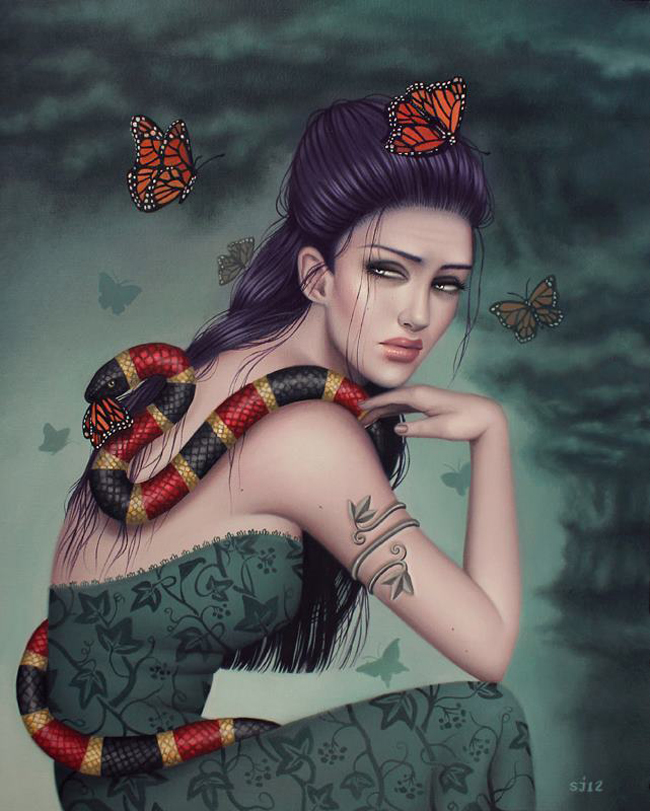 Do you have any ambitions outside of the art world?

Travelling! I want to see more of the world itself, but I suppose career wise, everything I desire at least steams from my artwork; books, sculpture, illustration. I love to create and am a creative person.

What has been the highlight of your career and why?

Being approached by the Thinkspace Gallery back when I was 19. I had just got a website up and running only a month or two before and posted my artwork to a readers section they had on the Juxtapoz website back in the day. Immediately got an email from them about showing at their gallery. I was an amazing feeling! I was, and continue to be, such a doubtful person when it comes to my own prospects, but getting that offer from them and being aware of who they were, it was this sign that maybe I did have some sort of career in my future… And thus, here I am, still at it nearly 10 years later. All I really wanted for myself.

What’s next for Sarah Joncas?

I have shows booked until 2016, so at least for the next year and a half, I’ll be continuing to show and sell my personal work. However, I still have great hopes to get a book of my work together soon, and in the future, put together a children’s book which I’ve thought about since my teen years. Mainly my desires consist of improving though! I want to be better, and I work very hard at obtaining that progress year by year.

Thanks for taking the time to chat Sarah! To see more beautiful work by Sarah Joncas and be updated on any upcoming exhibitions, check out her website: Tea Party Love – The Art of Sarah Joncas 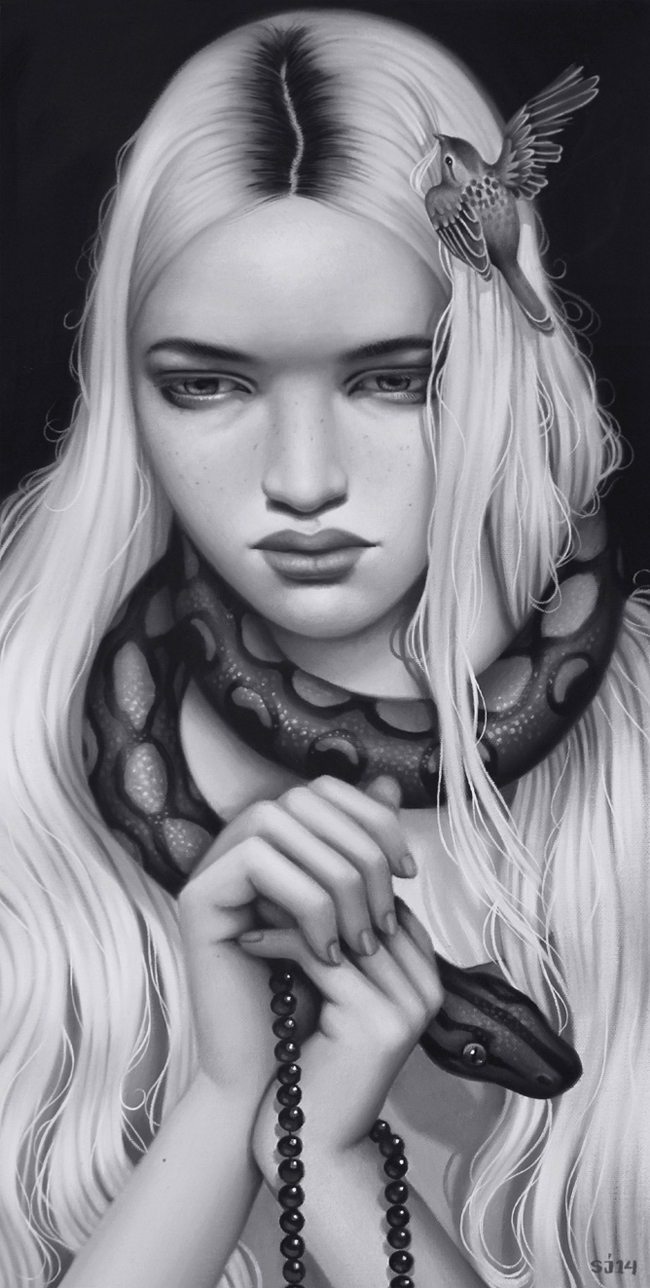 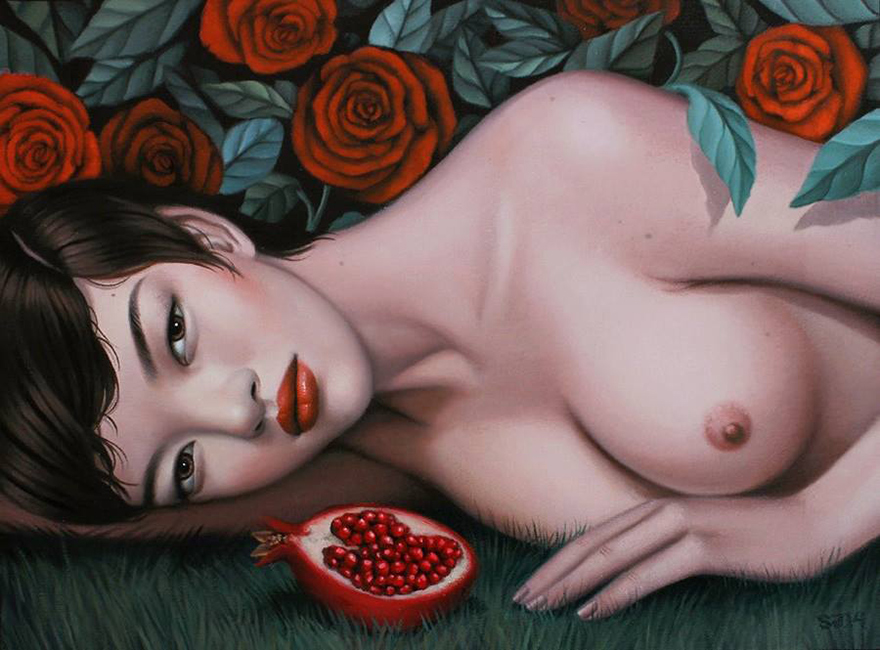 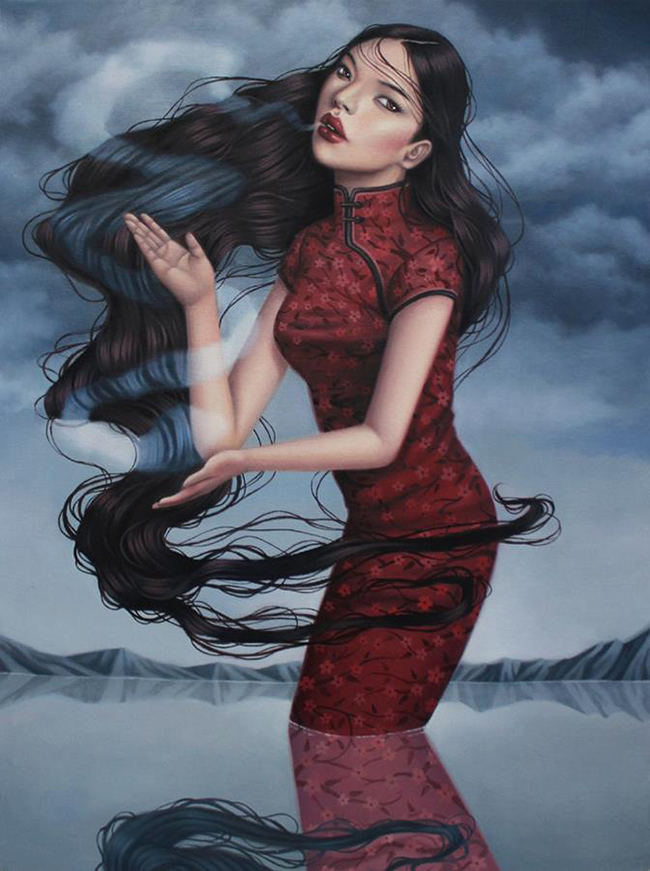 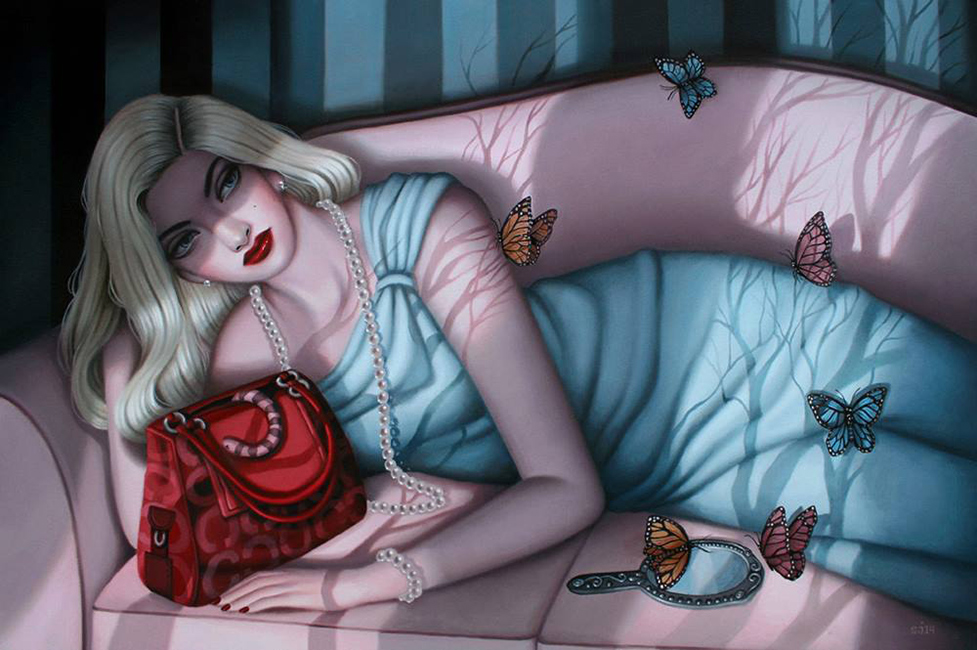 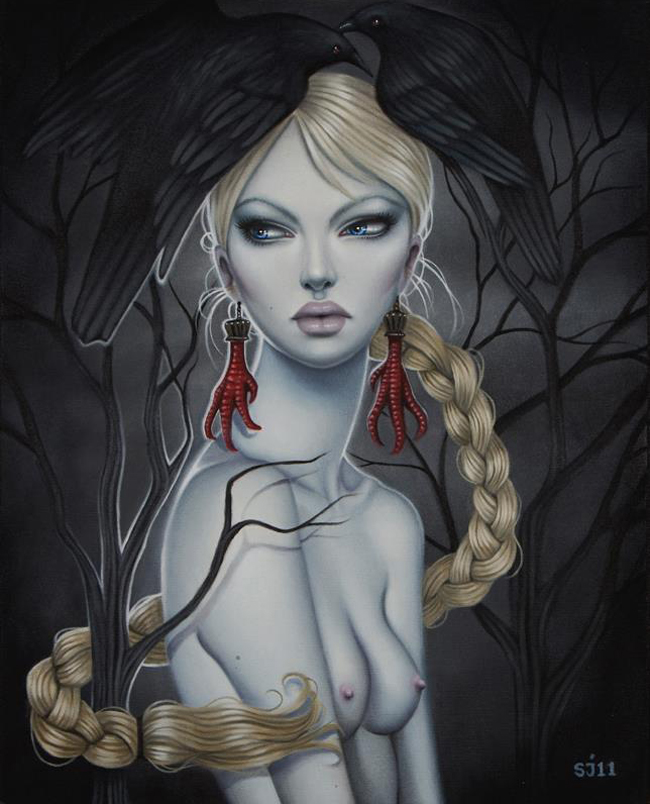 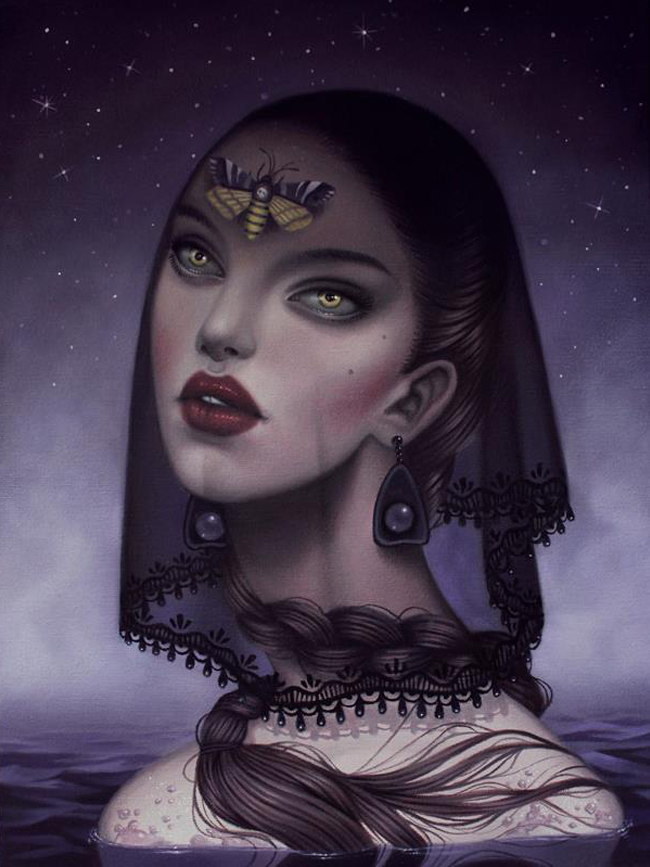 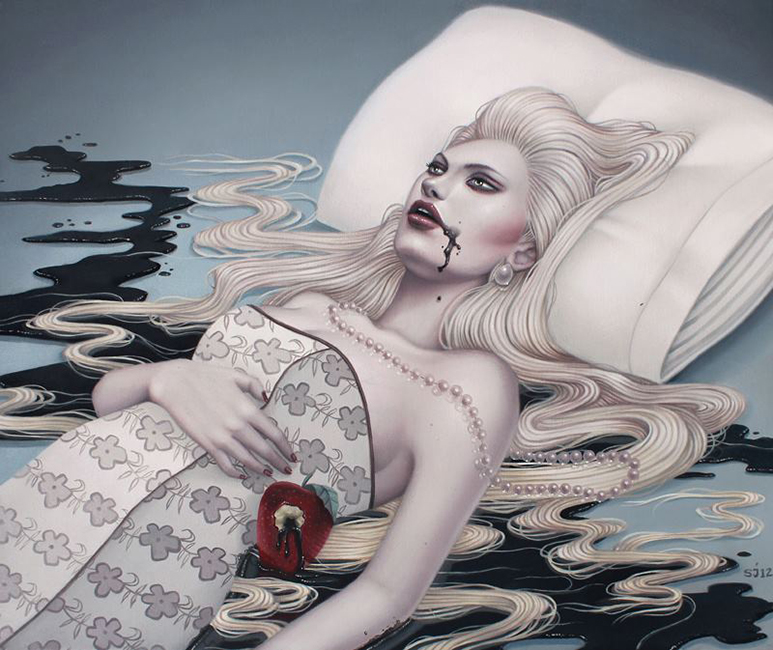 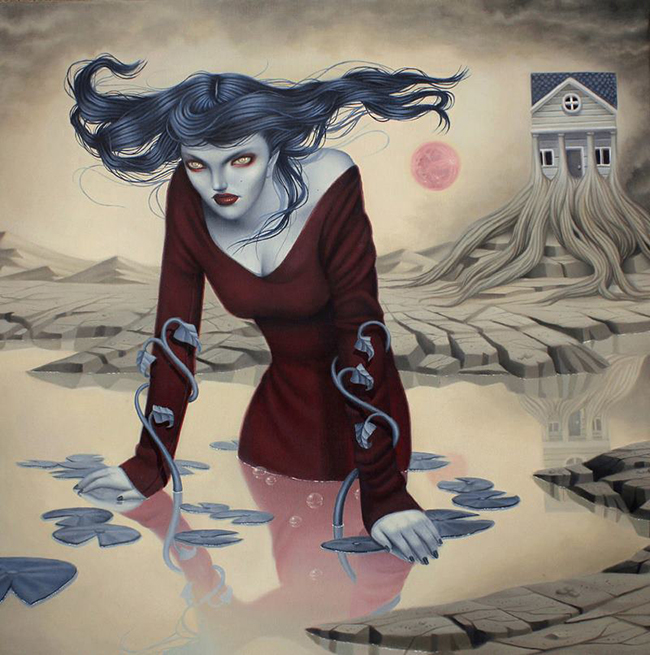 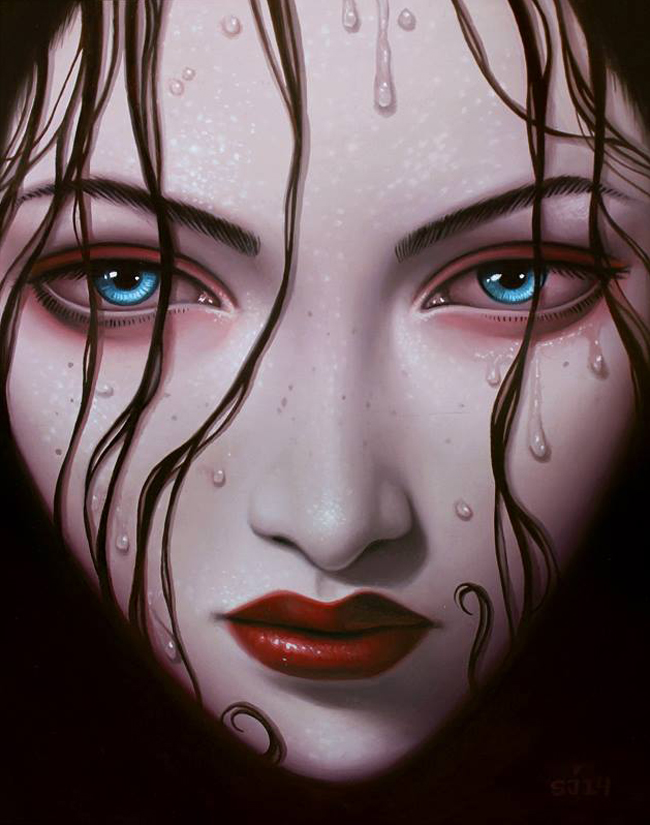