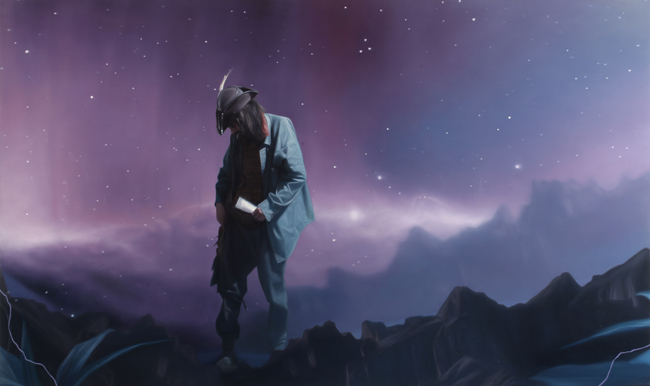 Seamus Conley creates hauntingly beautiful paintings which simultaneously appear both familiar and otherworldly. By combining the fantastical imagery from his own internal realm with that of the realities of living in an external world, Conley constructs scenes which conjure up ideas of parallel universes and alternate versions of ourselves. Within these unique spaces he plays with his love of opposites, bringing together the dissonance which exists between conflicting issues, states, and points of view. Whether they be relating to genre, nature, technology, social hierarchy, etc., it is through the merging of these diametric positions that Seamus succeeds in highlighting the strange and unsettling nature of our existence within contemporary culture.

As a self taught artist and recipient of the Pollock Krasner Award, Conley has achieved what many artists with even the finest academic training may never accomplish. He has developed an exemplary level of technical skill which allows him to realise his visions with the utmost clarity and gives his work a breathtaking power.

WOW x WOW recently caught up with Seamus to discuss his life as an artist, along with some of his influences and inspirations. 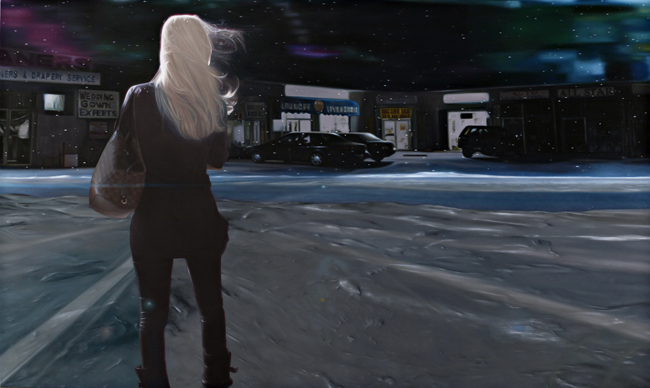 Hi Seamus, thanks for giving us this opportunity to ask you a few questions. First of all, could you give us an insight into your background and tell us a little bit about where you currently live?

Thank you for the invite. I was born and raised in LA, mainly Santa Monica and have been living in San Francisco for the last eight years. I have a studio downtown on Market Street where I paint everyday. It’s an old antique warehouse that has been converted into artist studios. I can look outside my door and see the hustle and bustle and the old streetcars going by; it’s pretty cool at night.

As far as my development as an artist goes, like most artists I’ve been drawing forever and picked up painting at age fourteen or so. I painted here and there and showed my work in my early twenties. I then took some time off, exploring different things and having some adventures before I decided I wanted to be a full-time artist when I was 26. That was 2002. 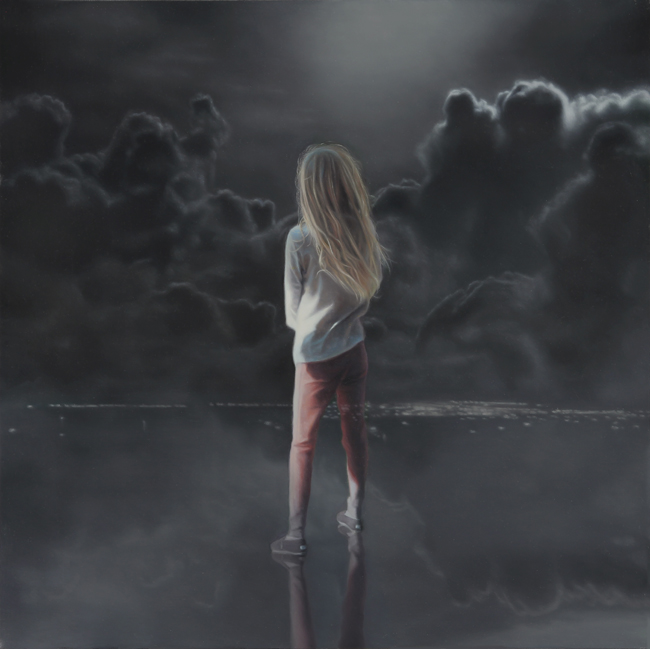 You refer to yourself as a ‘self-taught’ artist. What do you feel the advantages of being self taught have been in your development?

The biggest advantage is not having any student debt though if I had to do it over again, I’d probably take some painting classes. I could have learned more of the basics of oil painting quicker and made things easier on myself. I think as long as you’re curious and make an effort to expose yourself to a broad variety of art you can learn a lot on your own and develop your own tastes and attitudes. Early on I’d spend hours in museums, galleries and a particular art bookstore called Hennessey + Ingalls in Santa Monica. The owner of one of the first galleries I showed in was a walking art encyclopedia and appraiser of old master paintings. He would talk to me and introduce me to a lot of different art and ideas as well. I’ve heard some artists say they have to do some deprogramming and unlearning after they’re done with school. I never really had to go through that. 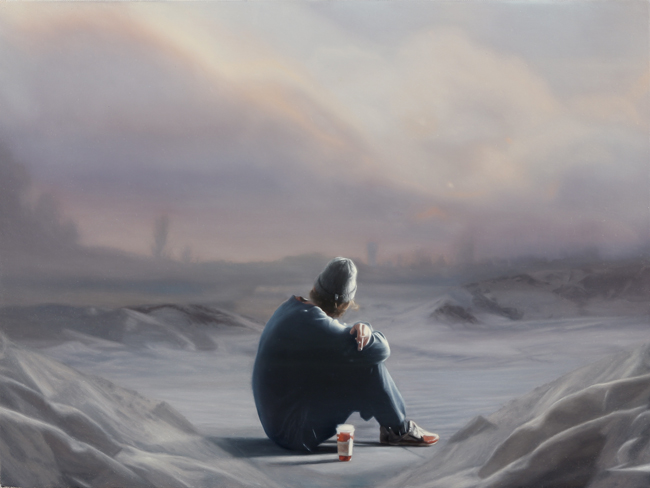 Talk to us about the themes that you like to explore with your work?

I’m interested in combining or overlapping fantasy-based imagery with images that represent reality or some sort of truth to portray my experience of daydreaming or being wrapped up in an internal universe while simultaneously existing in the moment of the external world. Aesthetically I’m drawn to both slick, professional, fantasy imagery and low budget, amateur, gritty documentary style imagery. When these two genres are combined, it creates a synthesis that has a way of mirroring our experience.

Your paintings seem very considered and are always meticulously composed. One can only assume that each piece is carefully thought out and planned before you ever pick up a paint brush. Can you describe how you approach this aspect of your work?

Yes, I compose things on the computer and play with them for months sometimes before I decide to commit and go forward with the painting. I enjoy meditating on each piece and sometimes change it completely from its original concept before I paint it. There’s a lot of free association involved, but I try to keep my overall themes in the back of my mind while I work on them. For a while I was taking pictures of random people on the street to catch them in a candid moment that represented a kind of subtle, unexpected, honest moment that you don’t get when using models. Recently I’ve begun creating these kind of Frankenstein-like figures taking multiple images of people and combining them to create the subject. 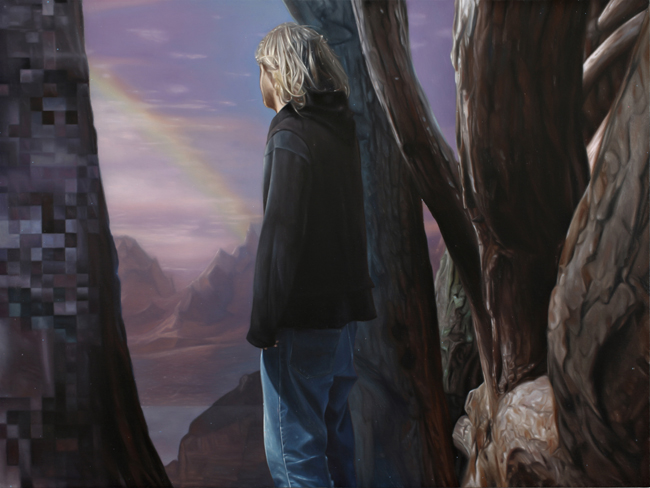 There is a distinct cinematic quality to your paintings, and in many cases they could be mistaken for a still from a sci-fi movie or a film directors vision of a post-apocalyptic future. Who or what have been the biggest influences on your visual aesthetic?

Growing up in LA probably had a big influence on my work and how I view the world. Cinematic imagery on Billboards and bus ads were kind of inescapable. In my mid twenties I wanted to be a filmmaker and took some classes, but decided I enjoyed the solitary experience of painting, so figured I could tell my stories that way.

The narratives within your paintings appear to be very open-ended. Do they lead somewhere directly in your own mind and would you like the viewer to reach the same destination?

I have always been drawn to stories that don’t have concise spelled out endings. They leave you asking questions and wanting more. I aim for that in my own work. Maybe I have a lot of unresolved feelings about my own life and I bring that into my paintings. I think I’m more of a story ‘asker’ than a story ‘teller’. 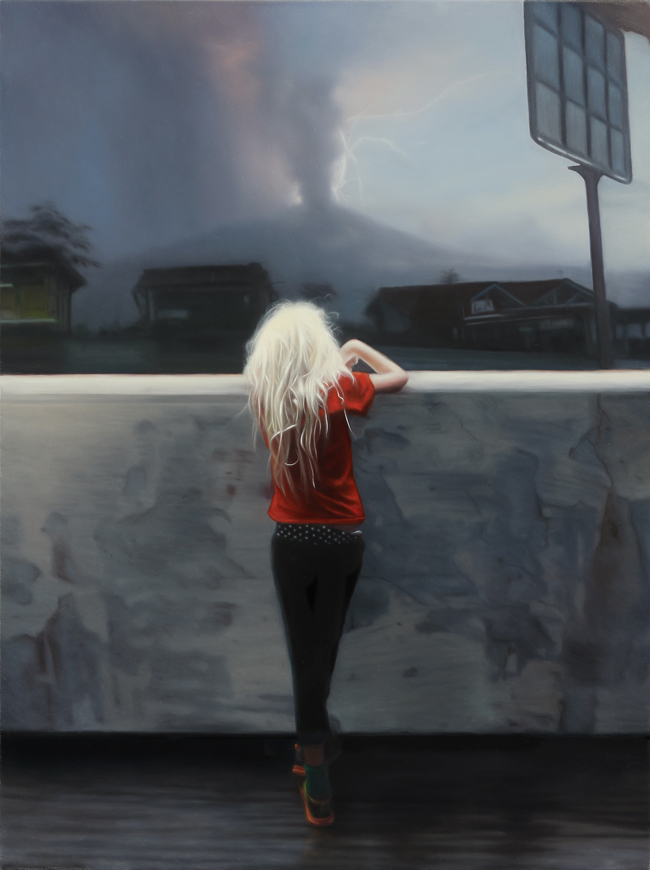 It will obviously differ from painting to painting, but what are some of the emotions that you would like viewers to feel when encountering your work?

Most artists tend to hate their work being labelled or pigeonholed in any way, but realize that it is hard to escape, and is in many ways a necessary evil. Your work has been described as being ‘hyperrealistic‘, would you say that this just or unjust?

I think my work can be described as ‘hyperrealistic’ for sure, but not really categorized as ‘hyperrealism’. I’m interested in playing with elusive narratives and more imaginative elements that aren’t really prevalent in what has been advertised as Hyperrealism. I do have to defend hyperrealistic paintings a bit and say that encountering one of those big realistic paintings in a gallery or museum is much more impressive in person than on a computer screen. I’ll also say it feels somewhat magical to make something look like it’s jumping off the canvas with some pigment and a brush. For me, painting things hyper-realistically is less about just copying a photo and more about mimicking the images and scenarios that won’t escape my mind. It’s about recreating my waking life and the movie that is constantly playing in the background of my thoughts. It’s about making an immediate connection with people and painting memories or anxieties about the future that we all have in common. 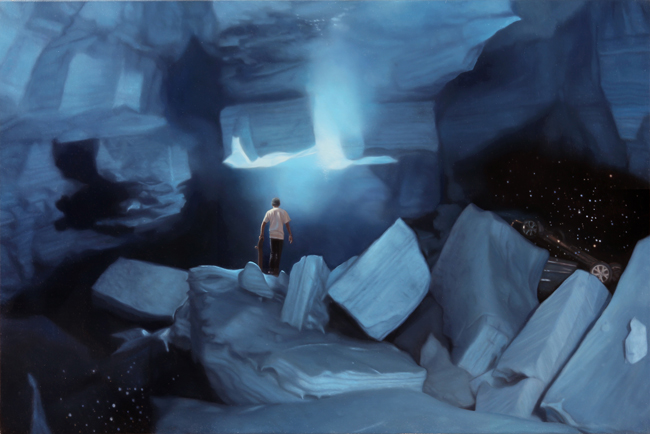 What do you feel is the most dominant motivator for you to get up every day and make art?

It has become so much a part of my identity that if I didn’t make art I’d be a little confused. It’s also about survival. I think part of me would wither away if I didn’t keep pushing myself to create. I’m pretty much unemployable so it’s a good way to keep busy while staying in touch with my youth.

Sometimes nothing can help get a more insightful glimpse into the personality of an artist than a tale from their own life. Would you be willing to recall a story from your past that you feel has had an impact on who your are and what you want to say?

I can’t think of one particular story, but something that really impacts my work is walking around San Francisco. There’s so much to see – all aspects of life are represented. There is nothing like walking down Market Street. You get everything from poverty to high society, gangsters, hippies, runaways, transvestites, police, students, drug addicts, tourists, every race all on one street. It really gets the blood going and makes you feel alive.

What’s next for Seamus Conley?

I want to break some of the rules I’ve set for myself, and I have a solo show at Andrea Schwartz Gallery next April that’s keeping me pretty busy right now. 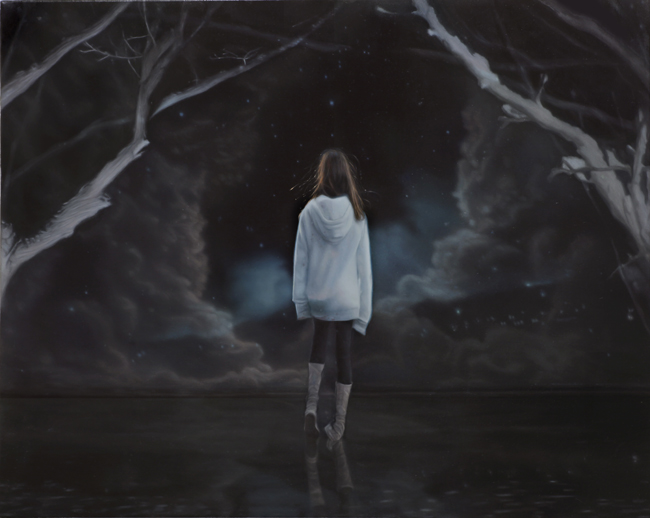 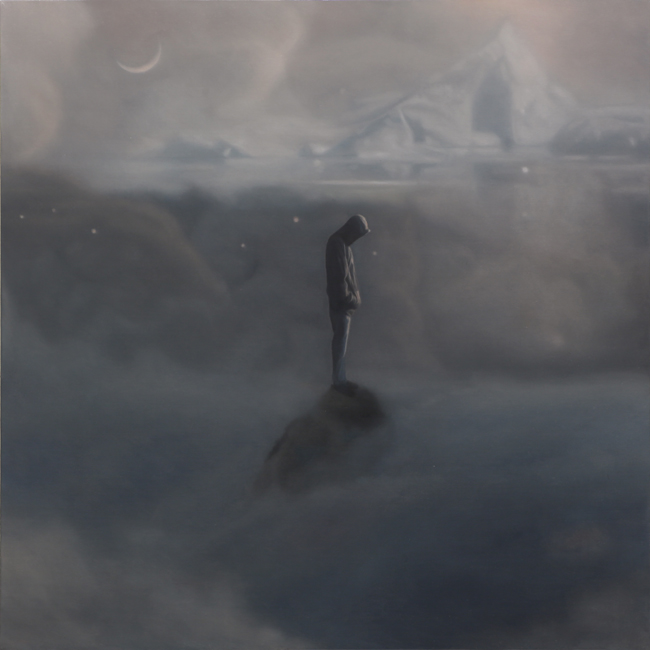 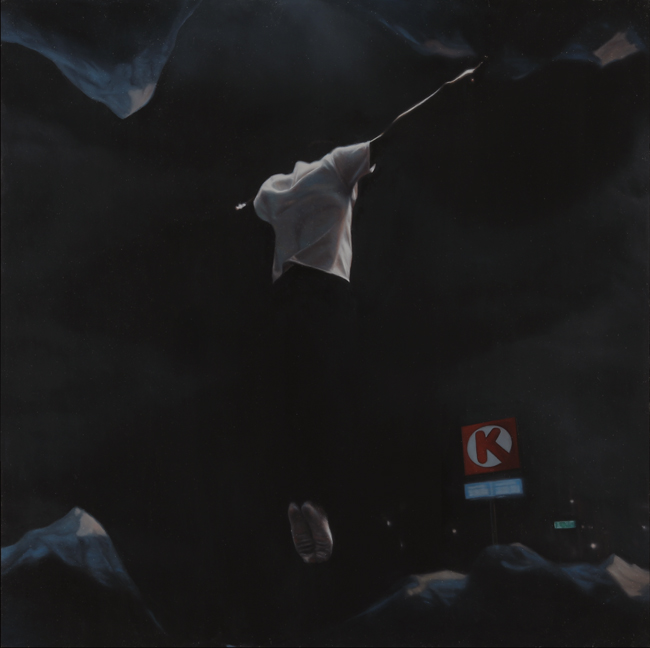 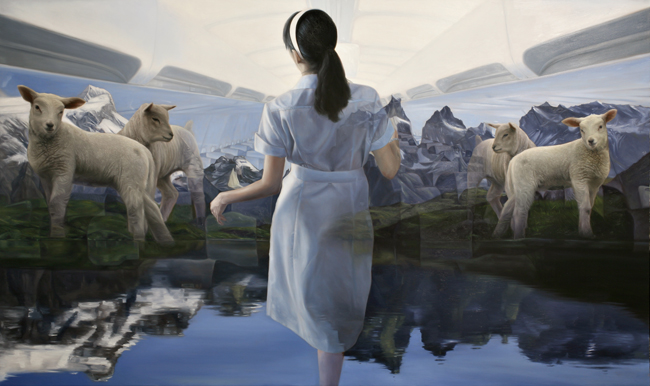 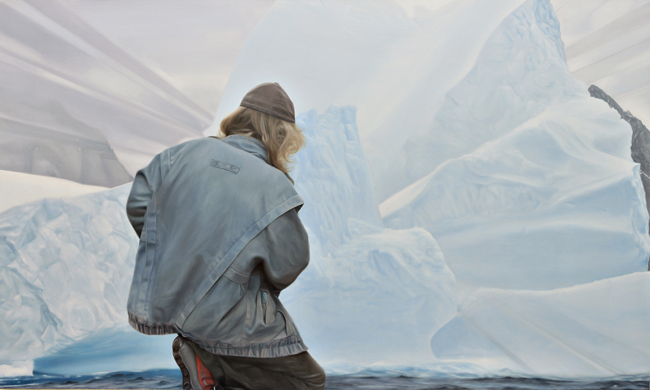 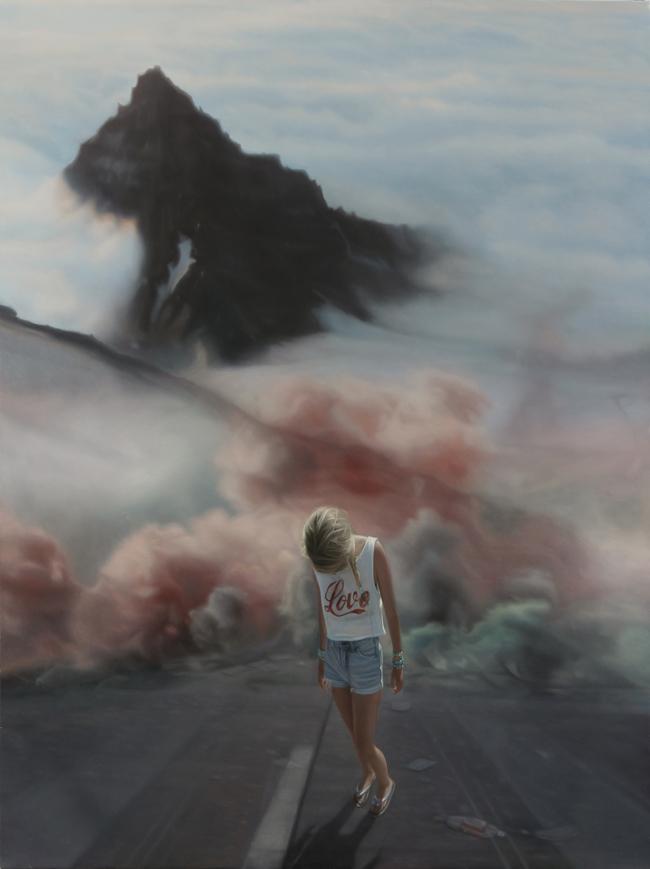 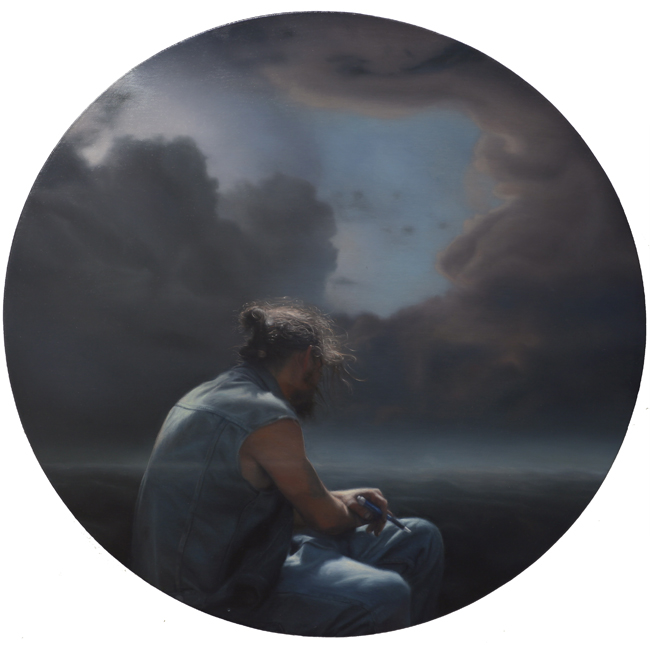 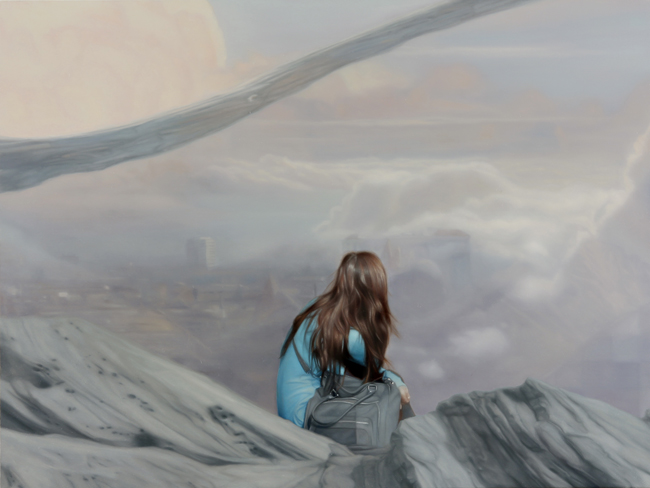 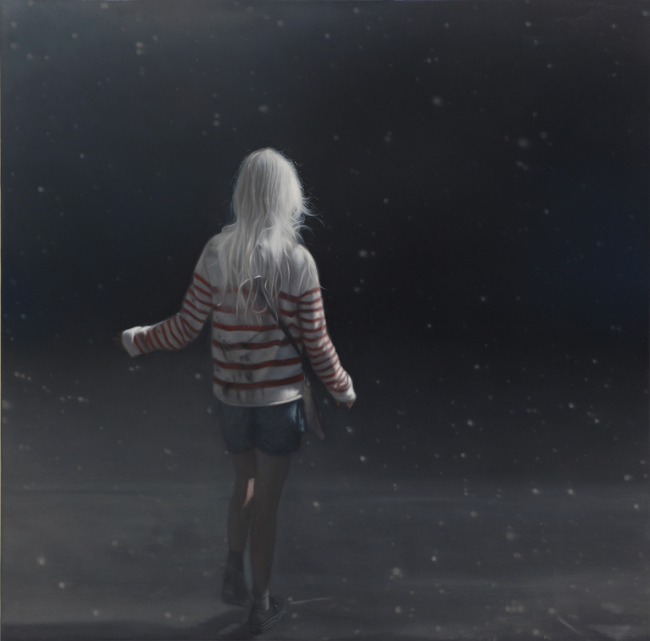