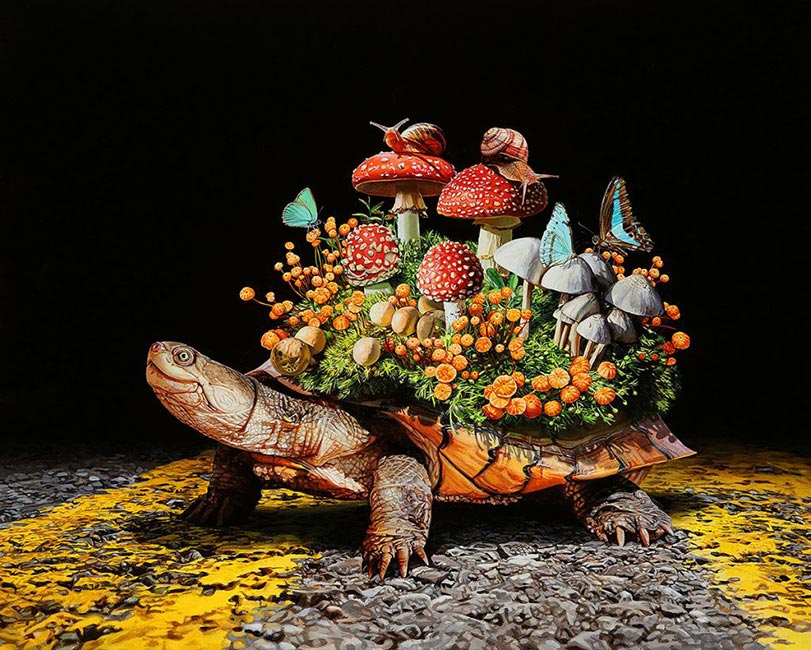 Lisa Ericson studied painting at Yale prior to embarking on a career in illustration and graphic design. Her bold, graphic color selection, matched with her technical abilities show how she was clearly able to marry her degree with her passion.

Ericson’s meticulously rendered, hyperrealistic paintings are executed in acrylic on panel with the use of minute detailing brushes. She depicts supernatural amalgams of wild animals, everything from the surreal winged rodents she’s fondly coined ‘mouser-flies,’ to entire, parasitical ecosystems perched weightlessly upon the backs of other creatures, each dramatically set against pitch black backgrounds. Technically breathtaking, the works are optically dizzying in their depth, color, intensity, and contrast. In Ericson’s universe visual poetry abounds: a tree of monarchs emerges fantastically from the shell of a placid turtle host, while an entire miniature coral reef drags close behind on a beta’s fins.

Ericson’s works playfully consider the order and balance of natural bodies and systems through their reconfiguration. Recognizing the delicacy and interdependence of all natural infrastructures, the artist plays with their improbable remix, altering proportion and scale to fictional extremes. Through the creation of often whimsical hybrids, she considers the beginnings and ends of individual boundaries and collective frontiers, looking to the generative potential of thresholds and crossovers. Through the recombination of familiar parts, entirely new, beautifully abhorrent travelers are brought to life in Ericson’s composite creature worlds.

“I don’t really work in a sketchbook. As ideas pop into my head, I jot them down or do tiny sketches on whatever piece of paper is handy. Bare bones stuff, but a kernel to start from. Later when I start putting together a composite image of a future painting, the idea either flies or dies. But even if it dies, often a new and better idea is born out of it. Some ideas come together quickly. Others I try repeatedly, but I can’t get them to work. Some of those eventually click and become paintings. Some are still just floating around in my head.” – Lisa Ericson (Sour Harvest) 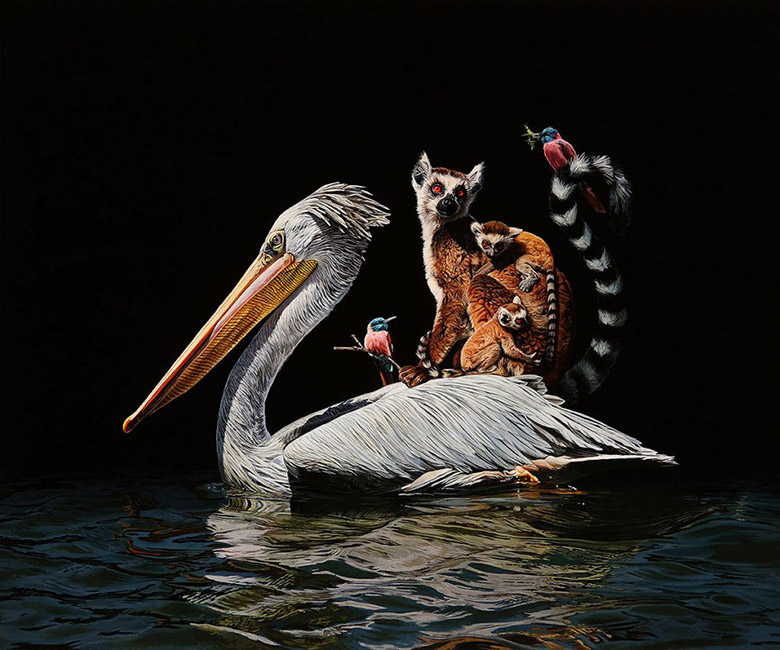 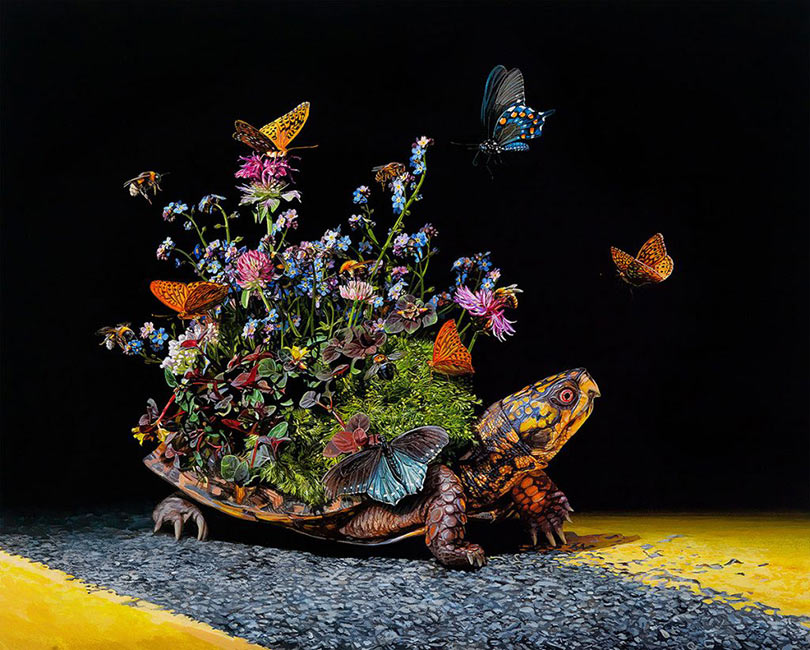 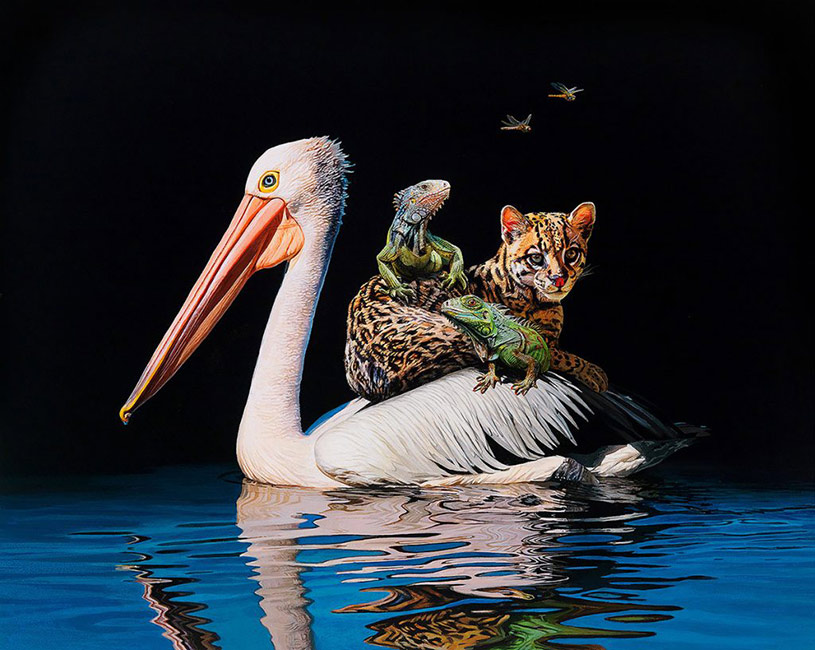 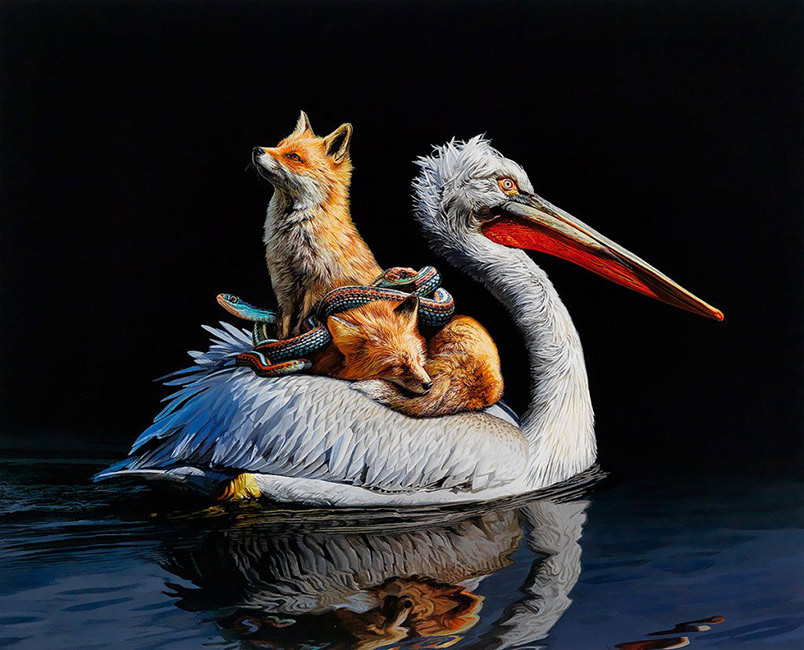 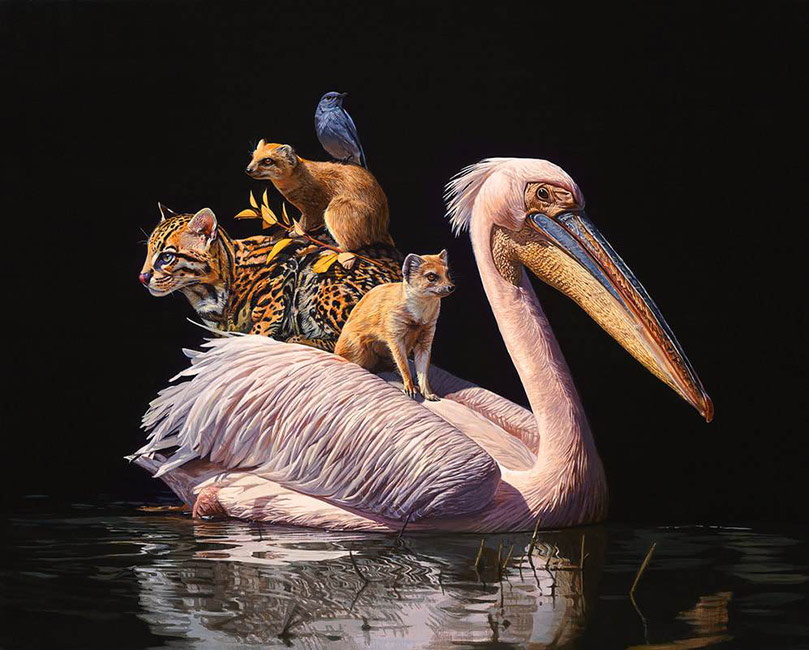 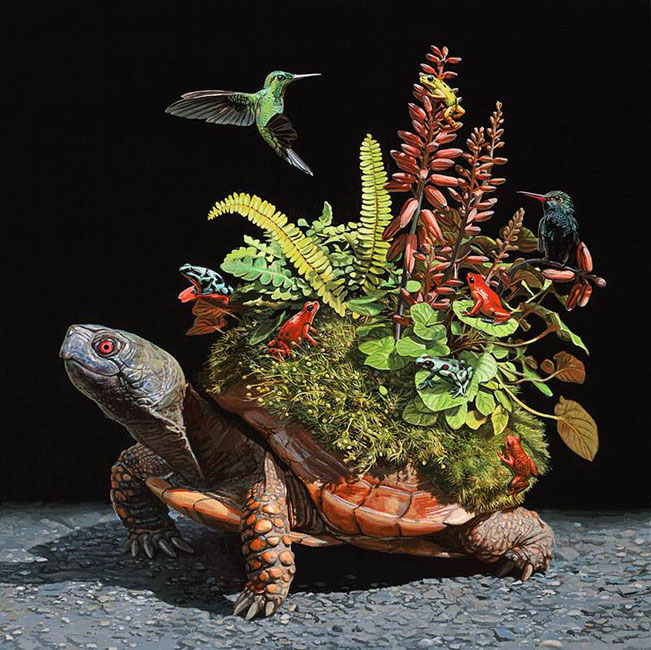 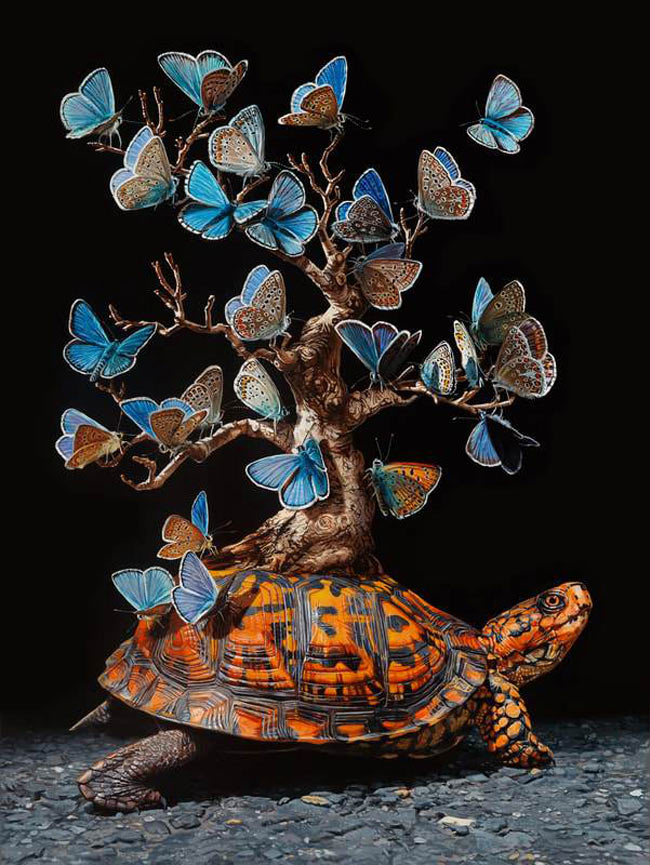 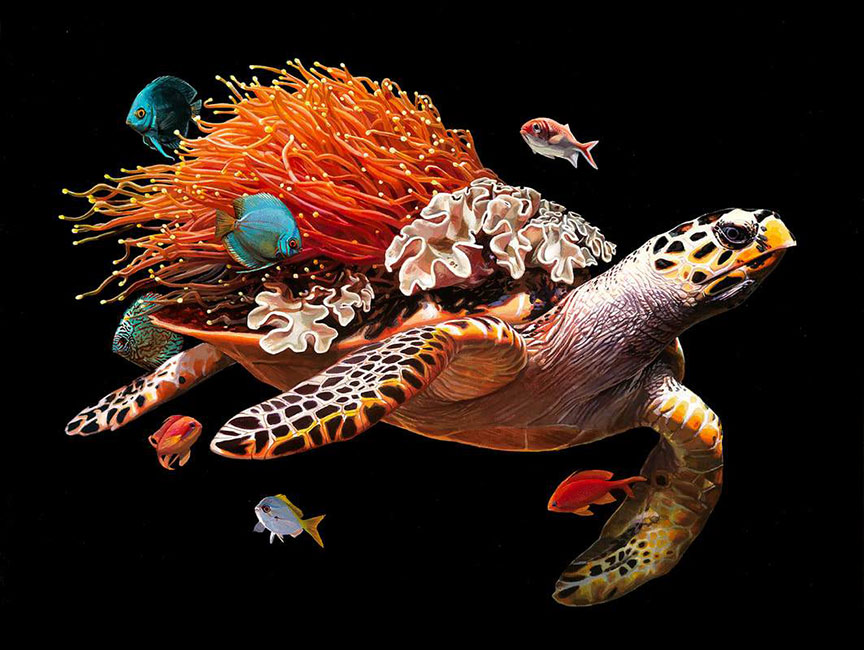 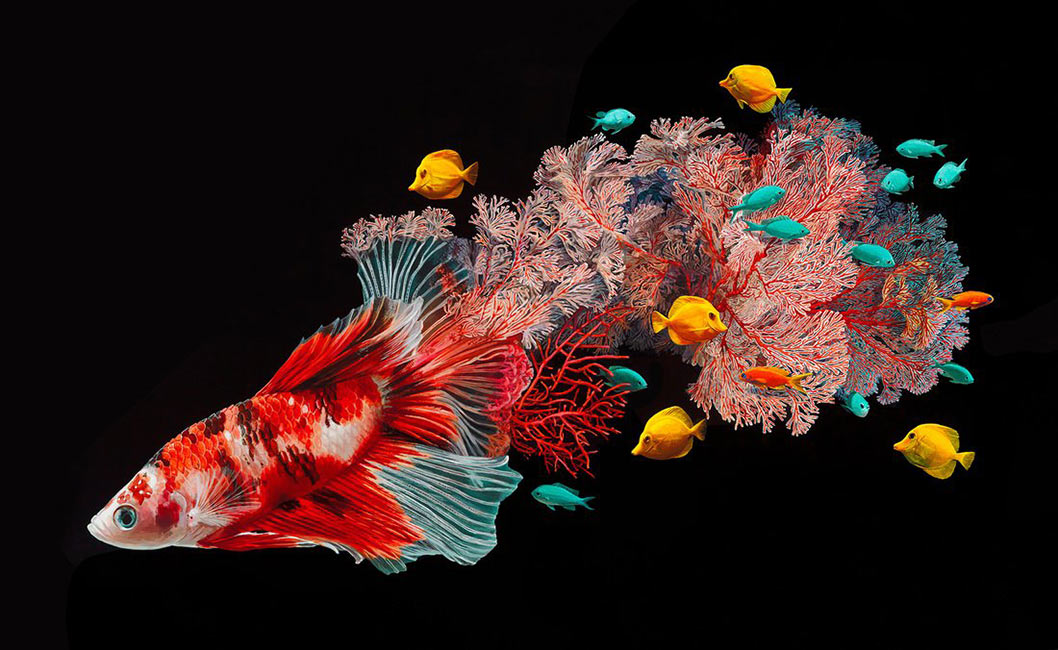 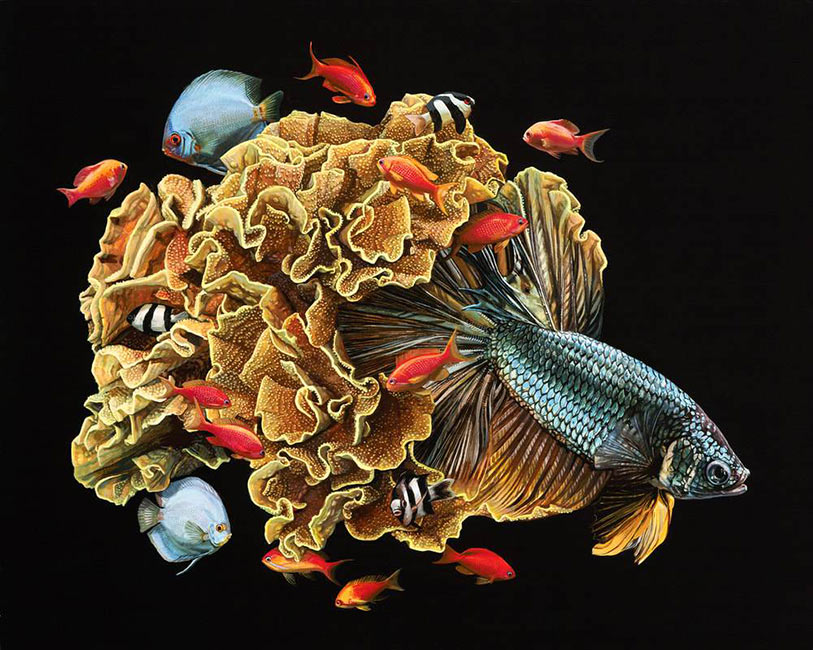 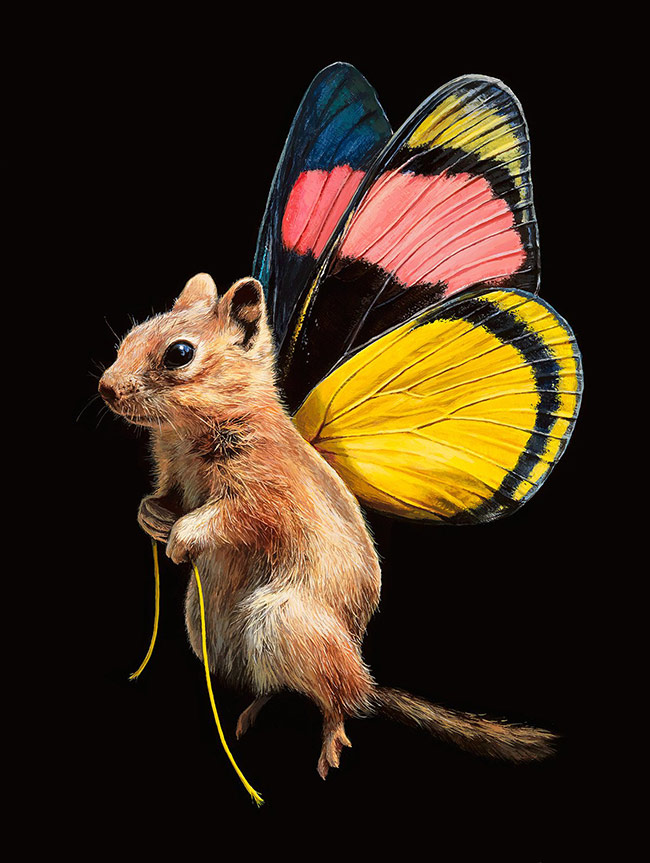