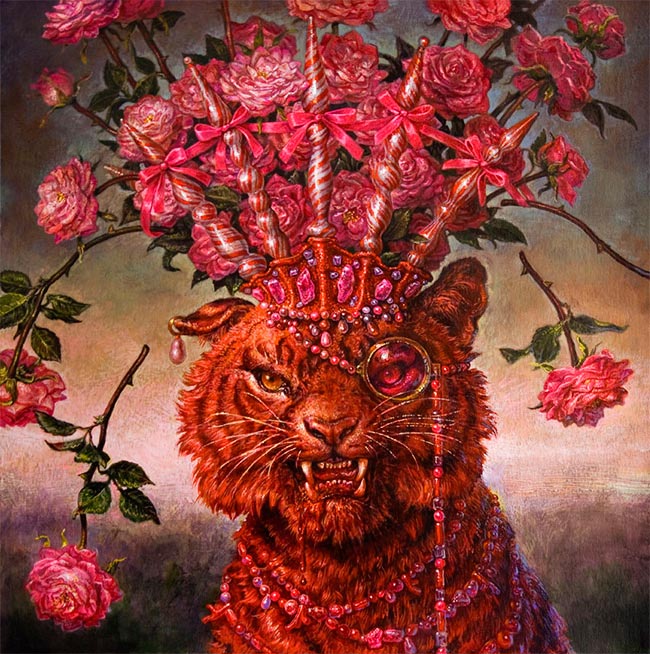 Hatched from personal experiences, the projects are often apotropaic and elegiac in nature, dealing with issues raised by the AIDS epidemic, aspects of maintaining wellness, and celebrating the outsider in all of us. The imagery is a cross-culturally hybridized, relentlessly figurative, technically tricky, perversely ornate, and more often than not– dark.

Some of the major projects have included The Secret Charts (1994), a series of trompe l’oeil scrolls depicting an alphabet of loss; Apple Canon (1996), his collection of 365 individual apple “portraits” to “keep the doctor away”; All Systems Go (1999), images organized as “missions” incorporating rocket ships, Woodruff’s meditation on the end of the millennium; FREAK PARADE (2000-2005), a cycle of 32 paintings with marching characters, a celebration of aberrance; and Solar System (The Turning Heads) (2008) motorized paintings on velvet, a group of emblematic two-faced “puzzles”, created after a close friend of the artist was diagnosed with the early onset of Alzheimer’s.

His works have been included in over one hundred group exhibitions internationally. He shows with P.P.O.W. Gallery, New York. His work is in the permanent collections of the Brooklyn Museum, MIT List Center, The New School, the Honolulu Contemporary Museum, the Greenville County Museum, and the Art Gallery of Western Australia.

The book, THOMAS WOODRUFF’S FREAK PARADE (Hardy Marks Publications) won a 2007 AIGA award for best design, and Woodruff has contributed award winning illustrations to every major periodical in America, including a memorable back page series “Rock and Roll Still Life” for Rolling Stone in the early 1990’s. He has created book covers for the novels of Anne Tyler, Roberston Davies, Gabriel Garcia Márquez, and many others.

While still in his twenties, Woodruff collaborated with avant-garde theater director Robert Wilson on the décor for his opera Edison, and he also designed the décor and costumes for Salome by Richard Strauss for the Hawaiian Opera Theatre in 2002. Woodruff illustrated Jack Handey’s “My Big Thick Novel” for the 2002 of Saturday Night Live. He briefly worked as a tattoo artist in the late 1980’s, and has promoted this and other “alternative” forms of image making in many of the exhibitions he has curated.

Mr. Woodruff is the Chairman of the Illustration and Cartooning Departments at the School of Visual Arts in New York , where he has taught for 27 years.

“I love paintings that are complicated and ingenious in construction, filled with bravura flourishes, and then burn their crazy pictorial logic into the brain! I think modernism was puritanical in its withholding of pleasure, and has turned many people away from the joy of looking at art. I feel that the lack of ornament is like a lack of adjectives in literature, or a lack of seasoning in cooking…its rough going. But it must be done with balance, I am not afraid to use design and ornamentation if it will service the overall image. There is something magical in taking these very humble materials and being able to make them into shimmering tableaus, I’ve worked for many years to be capable of such excess and make it look easy. Hopefully, it’s not overworked, the paintings in person are quite simply painted in blobs and dashes, and the brush does most of the work.” – Thomas Woodruff (Hi-Fructose) 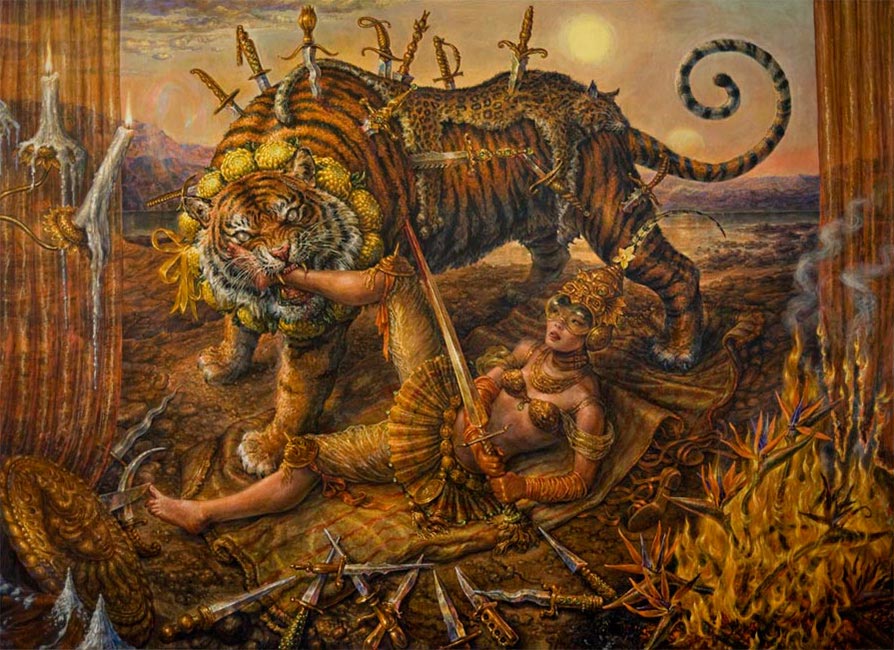 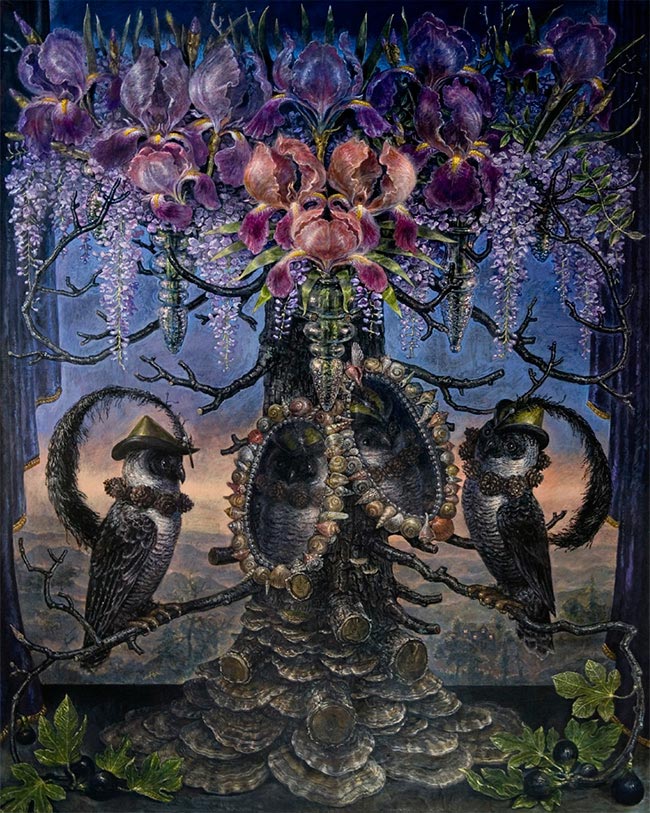 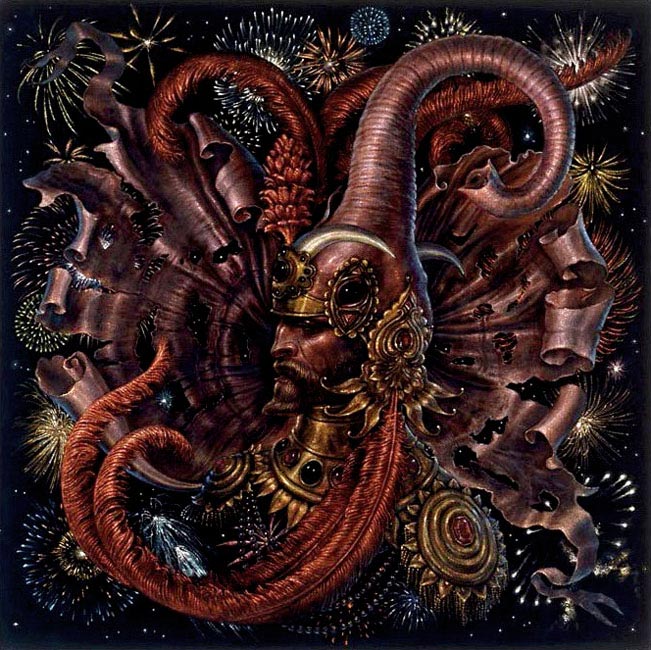 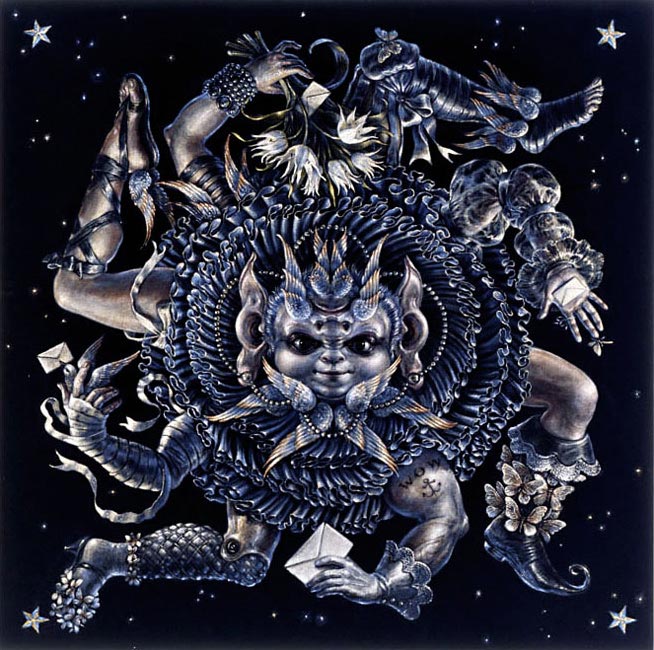 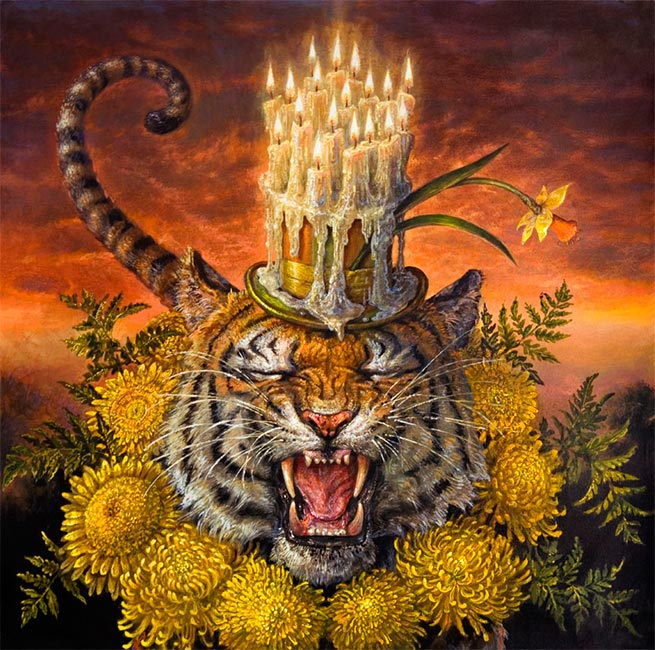 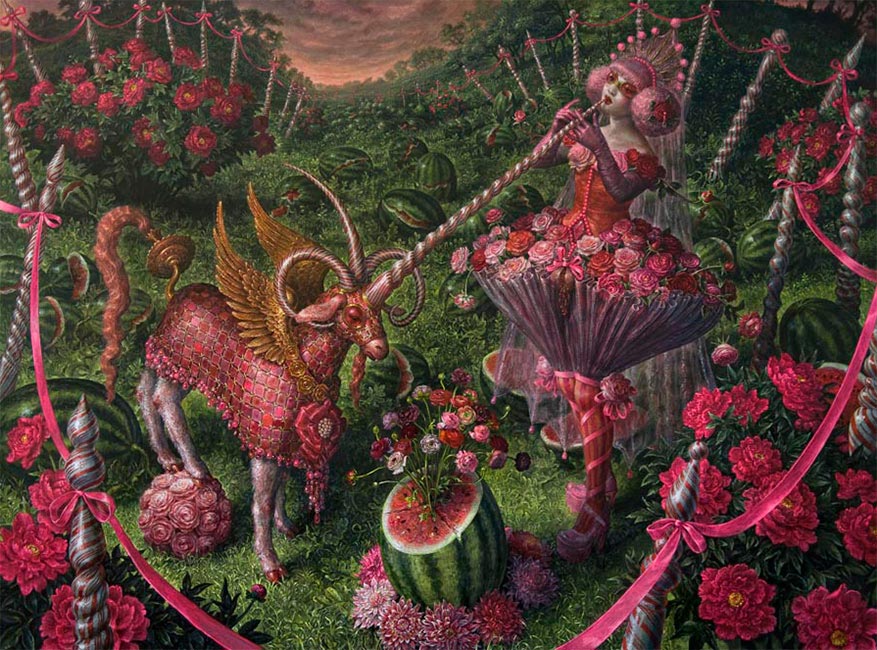 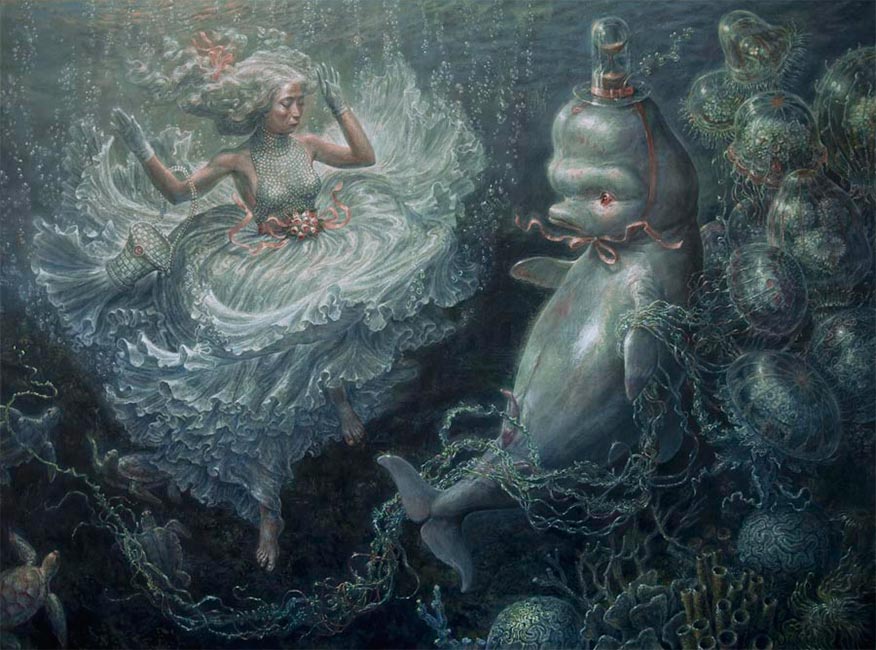 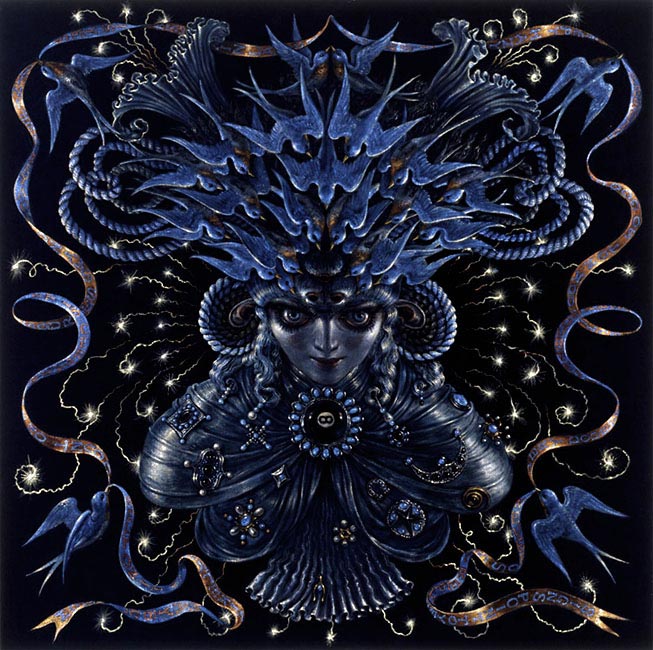 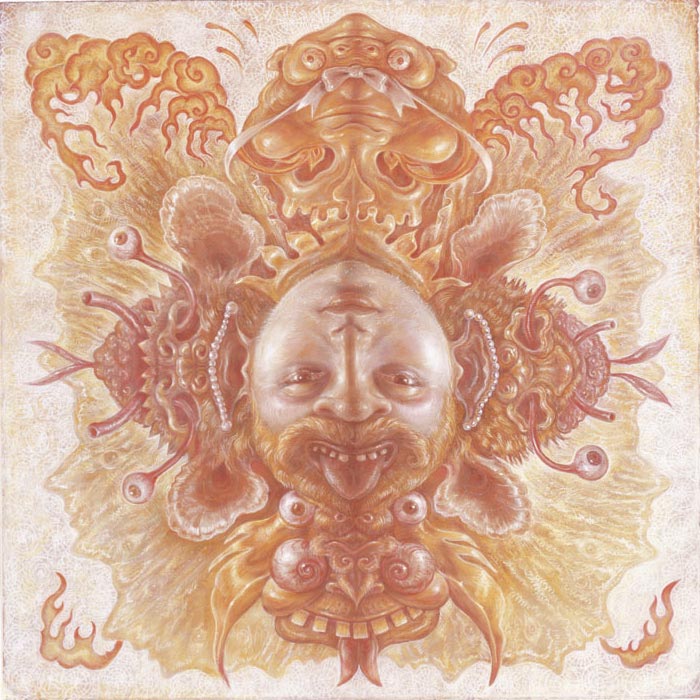 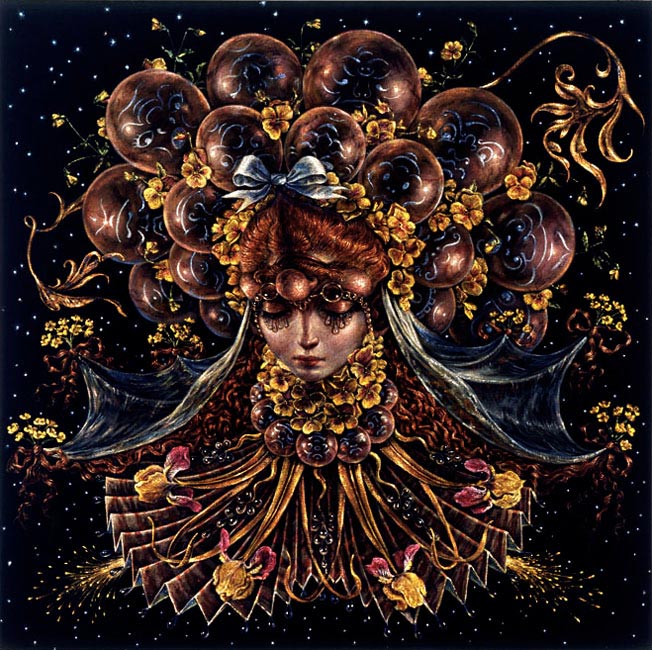 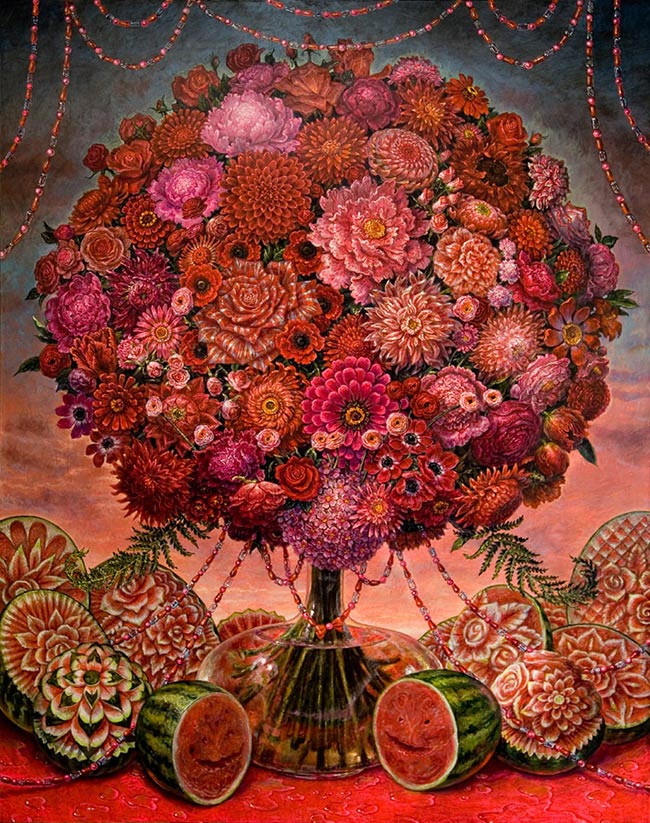 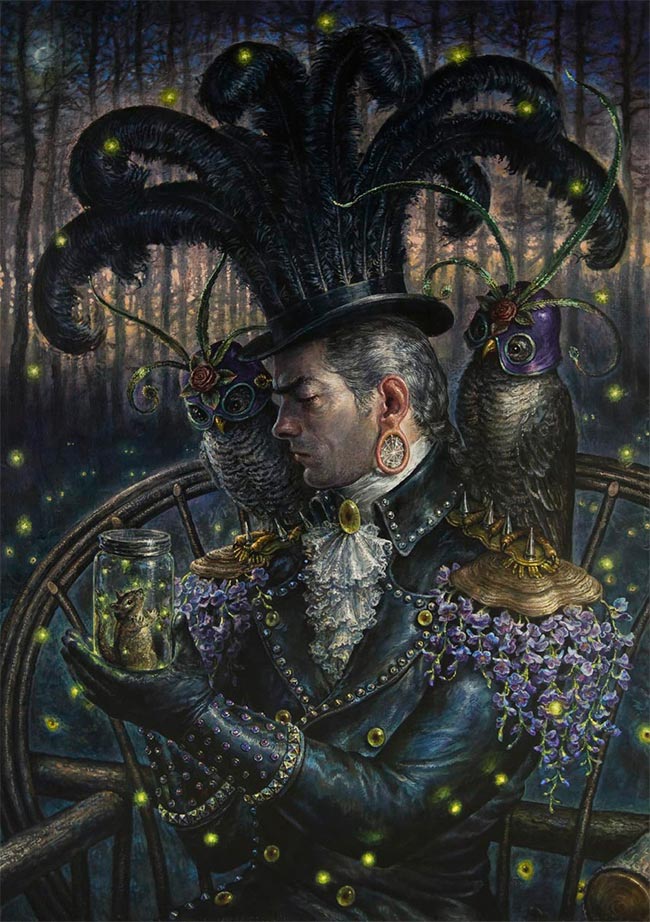 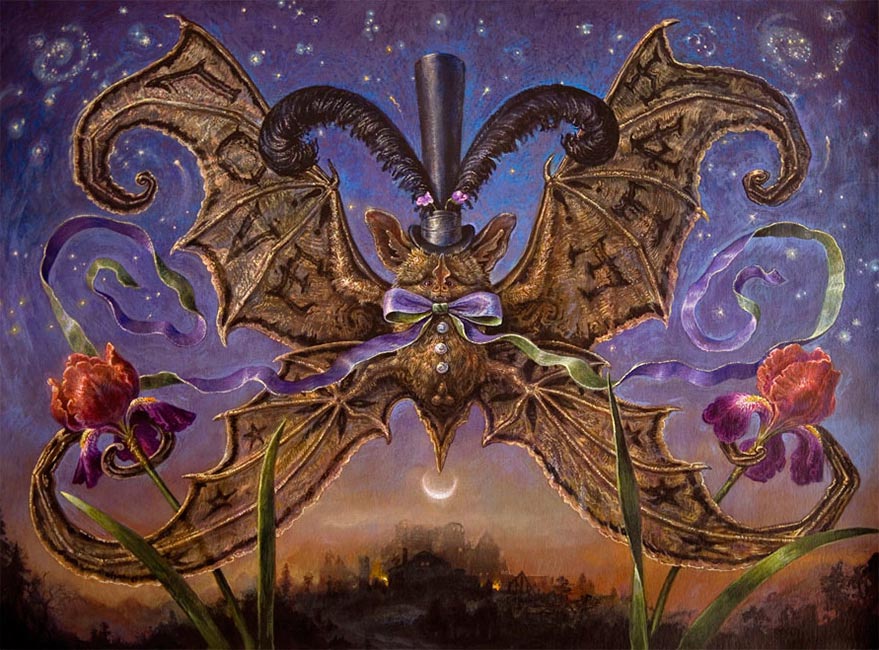