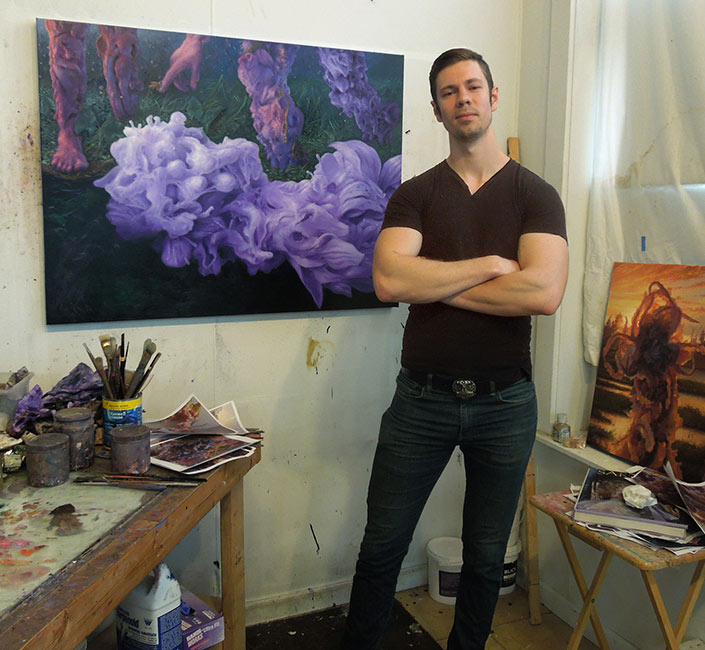 ‘Fields of Wonder: Some Thoughts on Beauty’ by Adrian Cox

When Tim first asked me to write something for WOW x WOW, I initially planned to elaborate on some aspect of my process, or perhaps speak about some of the influences in my work. But something much bigger (and more difficult to pin down) has been occupying my thoughts recently. About a month ago, I had a group discussion with my painting class about the role that beauty plays in the field of contemporary art. A number of the students made really great points about it being a tool of sorts, an instrument for seducing a viewer into caring about what you have to say. I think that this is true to some extent, but this explanation seems awfully meagre for something that countless philosophers, poets, and artists have invested entire careers in studying. And given the amount of time that I spend fussing over ornament and surface in my studio, I really have to count myself amongst their ranks. So what is it about beauty that occupies my imagination so forcefully? I’d like to present some personal musings here about this visual force that drives my work. 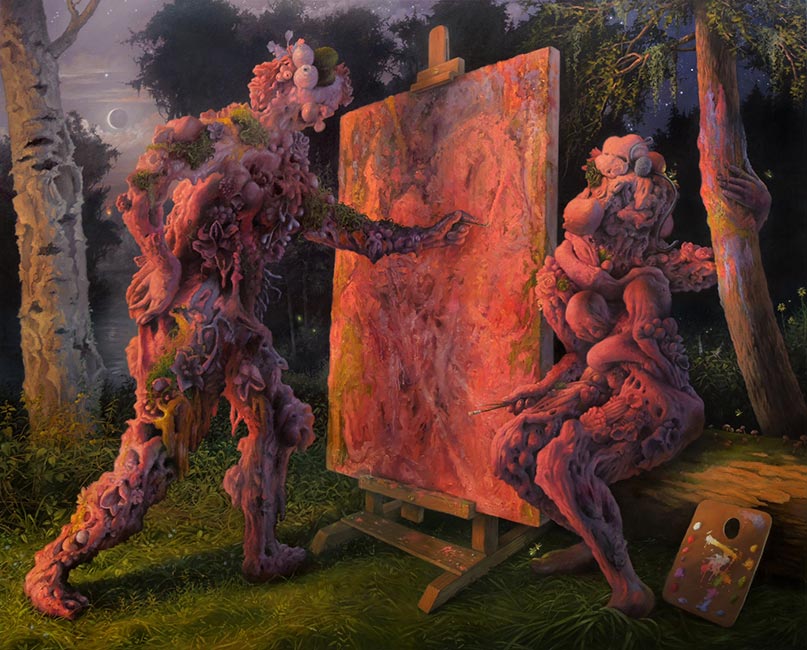 As with most things in my studio practice, I think that the conversation has to begin with some historical context. When painters speak about the history of beauty, it’s almost always understood that they’re referring to the problematic history of oppressive representation; namely, the objectifying white-male gaze. I believe that all painters have to consider this history to be responsible image makers, and yet there’s a broader politics of beauty that’s more relevant to the conversation at hand. This is the tendency for beauty, or ornamentation specifically, to be seen as less virtuous than austere forms by right of its inherent “deceitfulness.” This has roots that go back all the way to Plato and his decision to give artists the boot when formulating his utopian republic. The idea is that if appearances sometimes lie, then seductive appearances are even less truthful. What’s more, the language that’s been used to condemn visual extravagance has almost always gendered the issue (one of the clearest examples of this kind of language can be seen in the shift from Rococo extravagance to the patriarchal dogma of the Neoclassicists). Ornament isn’t just deceitful, it’s also more effeminate. If this raises red flags for you, you’re not alone. 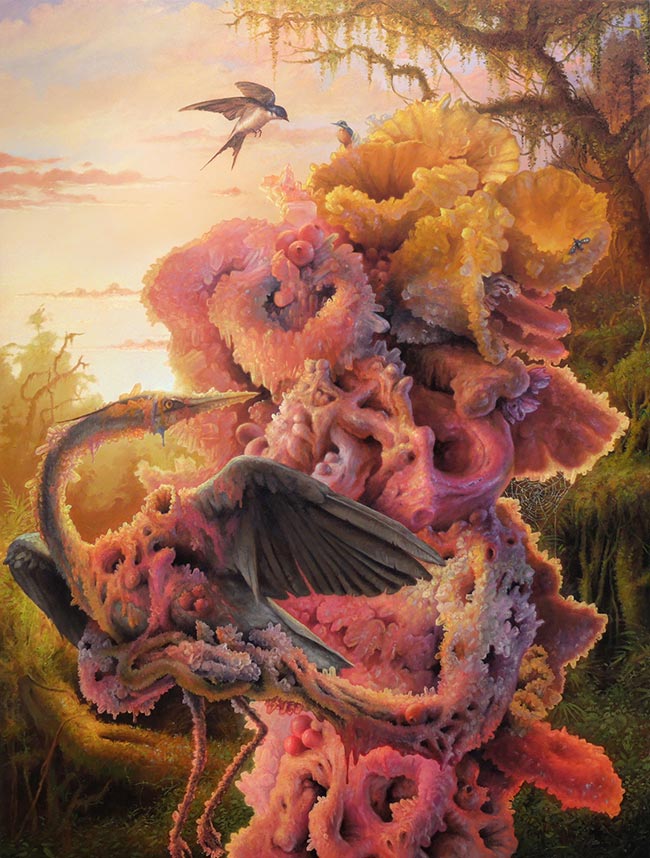 This historical context matters because, in my experience, this kind of bias still exists today, even if it’s not explicitly stated. When I was in grad school, I was making work that was incredibly intricate; these paintings were overflowing with visual information and intense colors. I kept having visiting artists come into my studio and tell me, “Well… your work is very beautiful.” Which, although it sounds nice, was always intended as a backhanded compliment. The implication being, your work is fun to look at, but I don’t believe that you’ve spent much time considering what it means. Since I was invested in surface and ornament, all the ideas had to be surface-level as well, right? Here we see the crux of current biases against beauty: works that are beautiful are seen as being shallow. 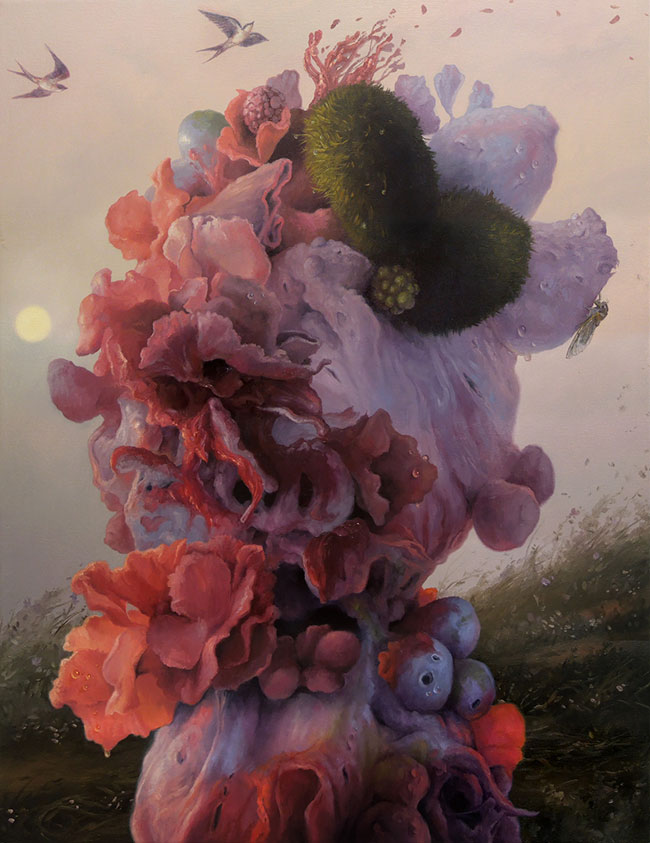 But I view beauty, and ornamental beauty in particular, as a form of visual praise, of celebration. As something that requires you to see the limitations of skill that box you in, and to proclaim that the box isn’t big enough, that you have to overcome yourself to achieve a form worthy of your subject. To wrap something in the most visually decadent veneer possible is a way of praising the subject matter and elevating the meaning, rather than flattening it. There’s not too much room for irony in my work since I think about beauty in this way. Humor, certainly, but I’m never insincere in the visual praise that I give my subjects. The empathy that I feel for the monstrous characters that I’ve created is very real for me, and this is part of the reason that I spend so much time striving to cloak them in beauty. 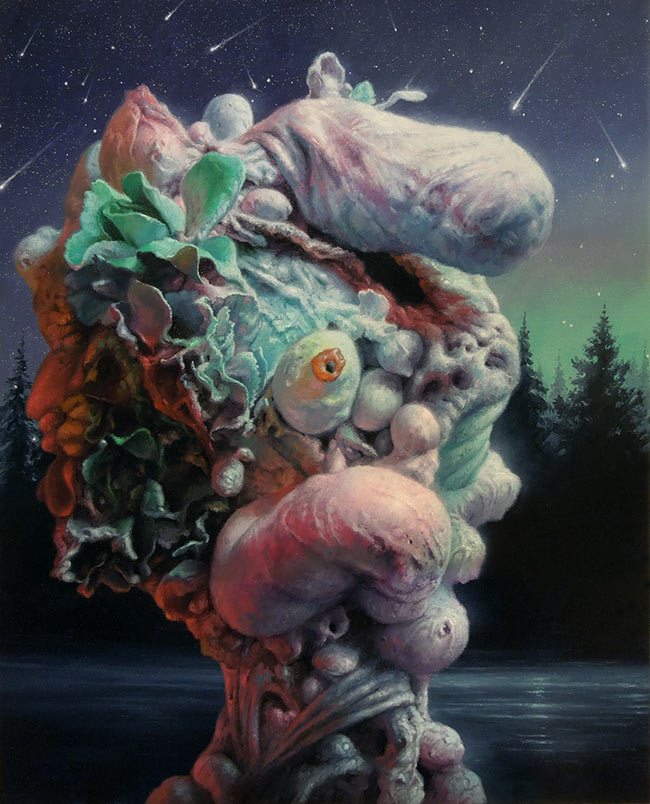 I also believe that beauty enriches and deepens the experience of viewing a work. When I speak about my paintings, I often discuss how I intend the image to be analyzed and read; the narrative components, the specific historical references. But I think there’s something else beyond this rational way of approaching a work of art, a way of viewing a painting as a catalyst for a certain kind of encounter rather than as a passive image. I’m arguing that we should make room for an experiential relationship with works of art. This is something I think about often, creating works that are meant to be read, but also to be felt on a level that’s almost akin to physical sensation. Beauty is bound up in this experiential read by threads of desire. A truly seductive image makes you want to lose yourself in the work, to enter the painting completely. 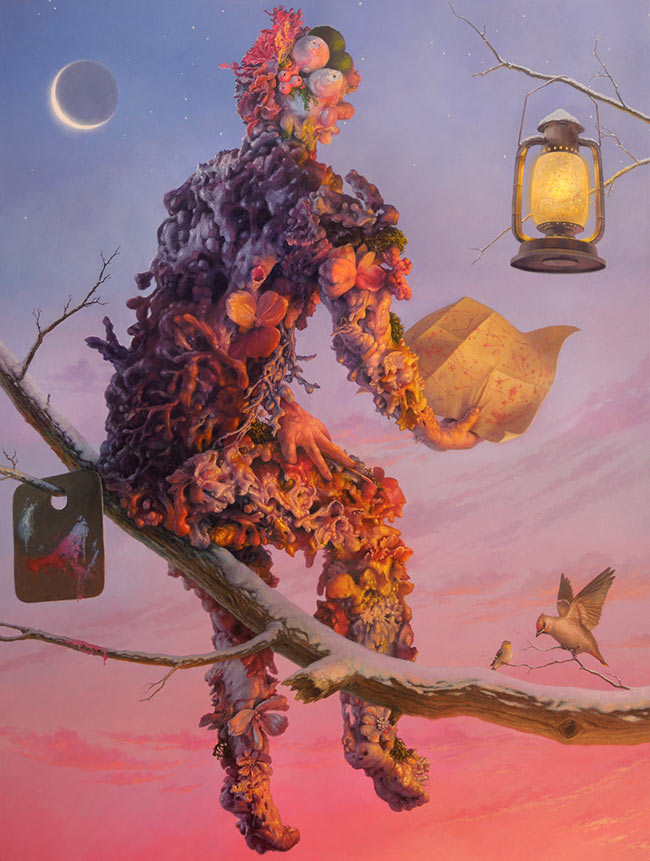 The ineffable goal of my entire practice lies somewhere between a conceptual read (elevated by ornament) and an experiential encounter (enriched by desire). If it sounds like I’m being vague here, I apologize; this is the event horizon for verbally articulating this idea. But I know that there’s something in great works of art that allow them to remain an active force through the ages, and not just passive artifacts. Beauty guides us into the depths of these works, and at the core of this depth, between meaning and feeling, lies wonder. Wonder is the elusive goal for artists, seen only in brief glimpses, and seldom where we expect to find it. It lies between rational thought and pure sensation, the bridge between surface and depth. It is the stuff dreams are made of, and it fills my imagination completely. 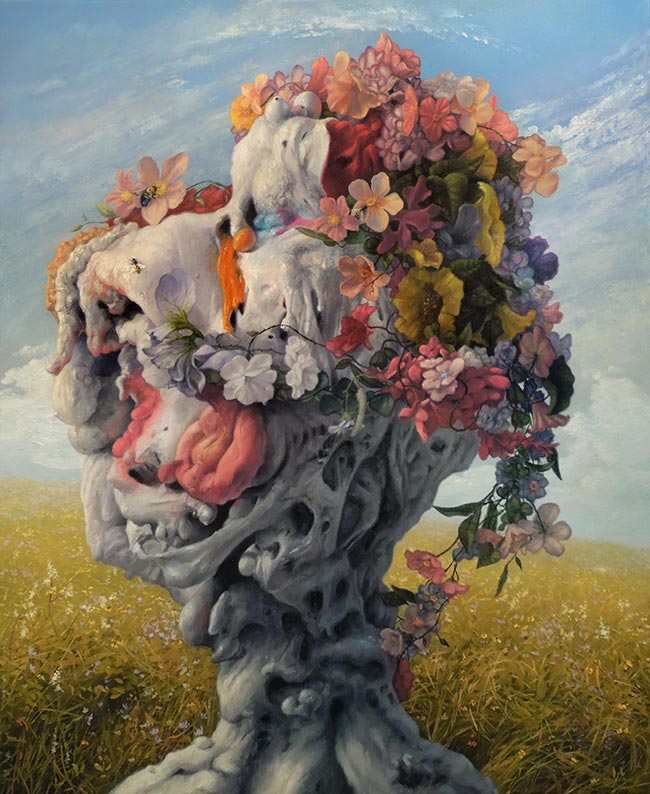 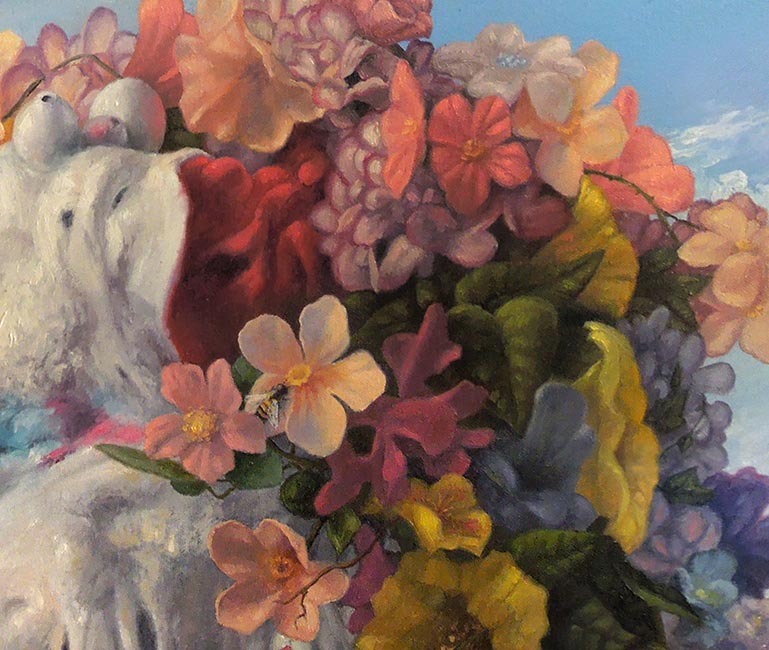 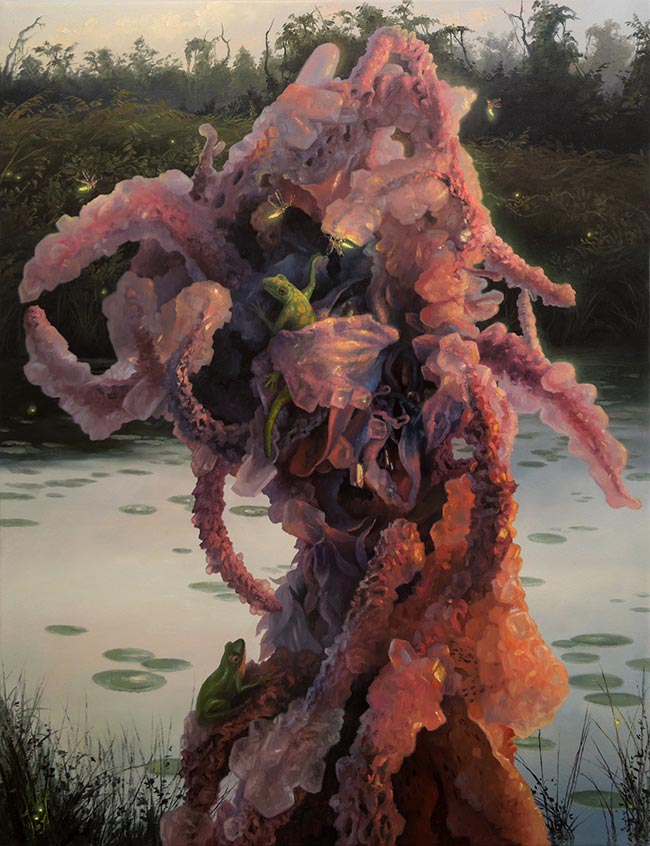 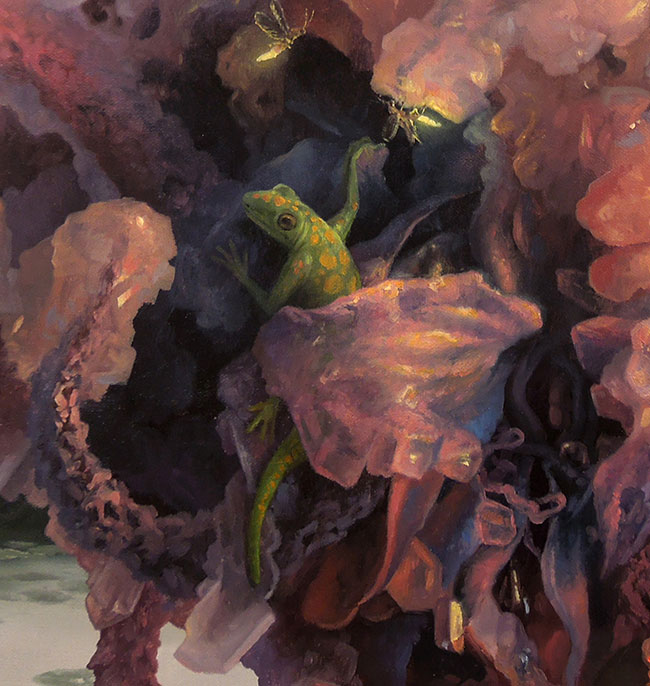