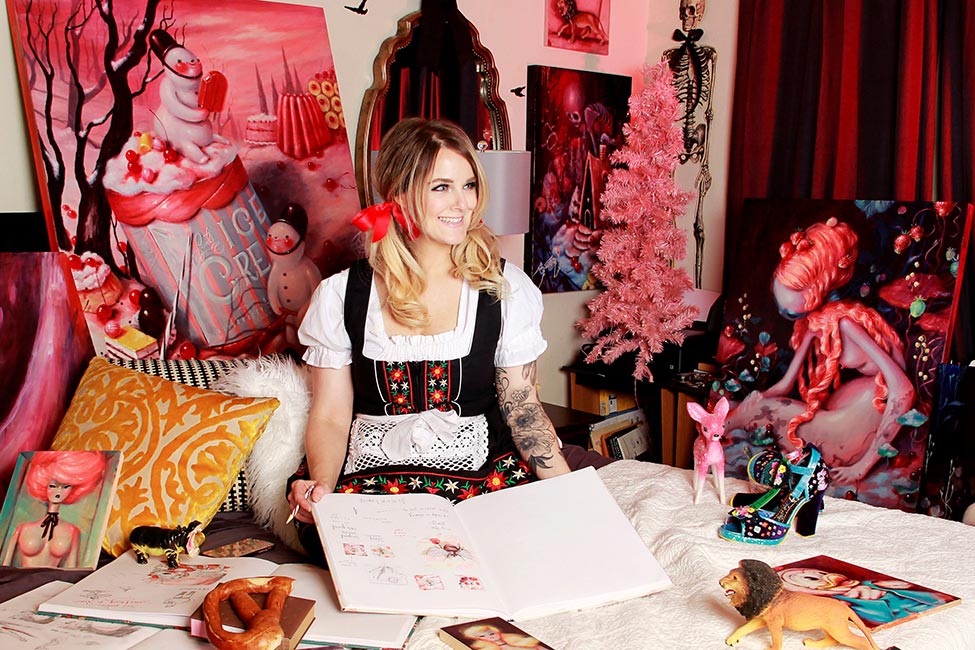 ‘Once Upon a Quiet Kingdom’ by Brandi Milne

Hello WOW x WOW!! My name is Brandi Milne, I’m an artist and I have a big exciting show coming up!! ‘Once Upon a Quiet Kingdom’ opens August 19th at the Corey Helford Gallery in Downtown Los Angeles. This show will include 43 new paintings, 3 new drawings, and has been my focus (my baby and my bane) for the past 3 years.

So I started here. Right out of the gate, ‘All The King’s Men’ was ultimate freedom. The background (I tend to overly obsess about backgrounds in general, which frustrates me) I left more loose and expressive than I had in the past – and rendered just the subject. These two gentlemen fools were inspired by the Humpty Dumpty nursery rhyme that I remember being drawn to as a kid. But here, these men are mindlessly consuming the same thing they are (yes, it’s dark) as they are entertained by something outside of the picture. This painting inspired the rest of the work, I kept it nearby to refer back and remind myself to be free and paint for myself.

My show title piece ‘Once Upon a Quiet Kingdom’ is the largest painting in the exhibition. (I can stress out about a large panel – what subject is important enough to take up that large space??) It started off as a piece I planned to paint for myself but as it developed and the story inside of it became clear to me, I began to see where I was going in this body of work. The work was telling of my personal experiences – of confusion and disillusion, of realizing that the world I thought I grew up in was more of a fairytale than reality (being raised pretty sheltered and naïve). The work was illustrating what it felt like then, and what it felt like to come out of that and join the real world where things weren’t soft and playful but were painful and harsh.

Here’s ‘Fiend’. One of only 4 girls painted in this show (aside from a series of small Barbie studies), this is a self-portrait. It talks about addiction, about never being satisfied and trying to fill your life (or yourself) with everything you think you want. It’s also about hiding…in plain sight.

‘My Sweet’ was another painting that inspired and steered the work, and one of the largest pieces in the collection. Here I experimented a little more keeping the expressive strokes visible. As I was learning about and turning towards transparency (the art of being transparent) in my personal life, it was important to apply that same thought to my art, as life imitates art, right? Or art imitates life…

‘Death Song’ is a very personal painting, one that’s hard to explain. How do you put to words the feelings (all the good and all the bad) you have for your mother? Nine years since her death? Simply, this portrait speaks of all the gifts I’ve received from life (growth and self acceptance and freedom) in her absence. It speaks of the power she had, and how delicate it really was.

(I loved working on this guy so much!!) ‘No Reason To Stay’ was another loose and expressive background that helped dictate the landscape of this body of work. I love the contrast and how it highlights the snowman’s light happy spirit with looming chaos.

One of the most important elements I ask of my work is that it convey a feeling. I want people who look at my work to FEEL something. I don’t want them to feel my same feelings or feel for my own story about the piece – I want them to feel their own feelings – and their own story. If there could be an exchange of relatable human connection between a viewer and my work, then I have been successful.

Another thing I asked myself during the process of this show was: “If I had only a certain number of paint strokes to make (and when they ran out, they were gone for good) – and I didn’t know the amount – what strokes would I make?” Asking this, I started to see that each stroke became more deliberate, it made me focus in a new way and feel less wanting to cover up the expressive strokes. It made me trust myself more in my work. And it brought about new branches, such as these little dolls that will be included in the show as well!!

I hope you’ll join me August 19th for the opening of ‘Once Upon a Quiet Kingdom’ at the Corey Helford Gallery in Downtown Los Angeles. It’s gonna be an art party and everyone’s invited!!