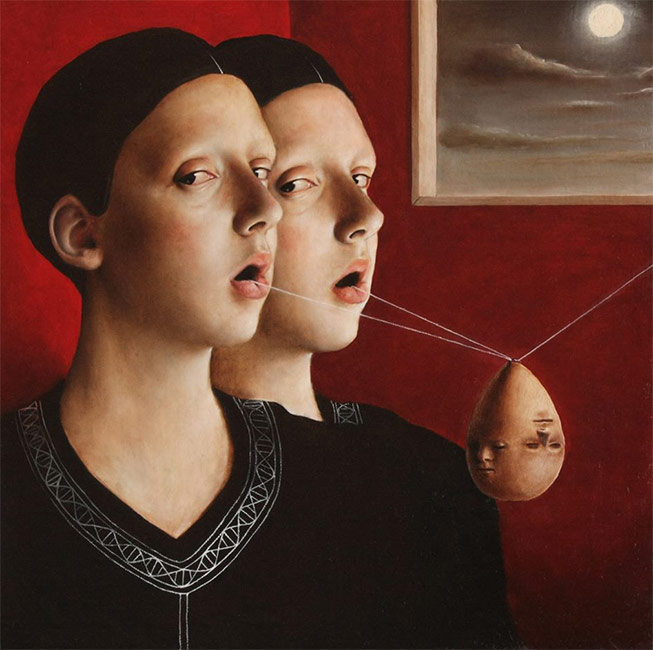 Alessandro Sicioldr is conscientiously observant and nurturing of the inner world which emerges from his subconscious mind. Since he was a young boy, Alessandro has paid close attention to the images and visions which would appear to him, and he has continuously documented them through his art. Aided in his creative self discovery by his psychologist and artist father, Sicioldr developed the skill of interpreting his private reality and has therefore been able to build on the universality of his profound symbolism and narratives. Tapping into the archetypal imagery familiar to all of us through our own internal spheres, Alessandro uses his intelligence and perception to strengthen our grasp of what it is that makes us human.

Sicioldr was born in 1990 in Tarquinia, Italy and currently lives and works in Perugia. Training came from his father in his classical painting atelier, where Alessandro learned not only how paint, but also picked up many traditional techniques, including how to prepare wood using Cennino Cennini’s method.

WOW x WOW have been intrigued by the work of this visionary young artist, and so were naturally delighted when an opportunity arose to dig beneath the surface during a Q & A. Read on to find out more. 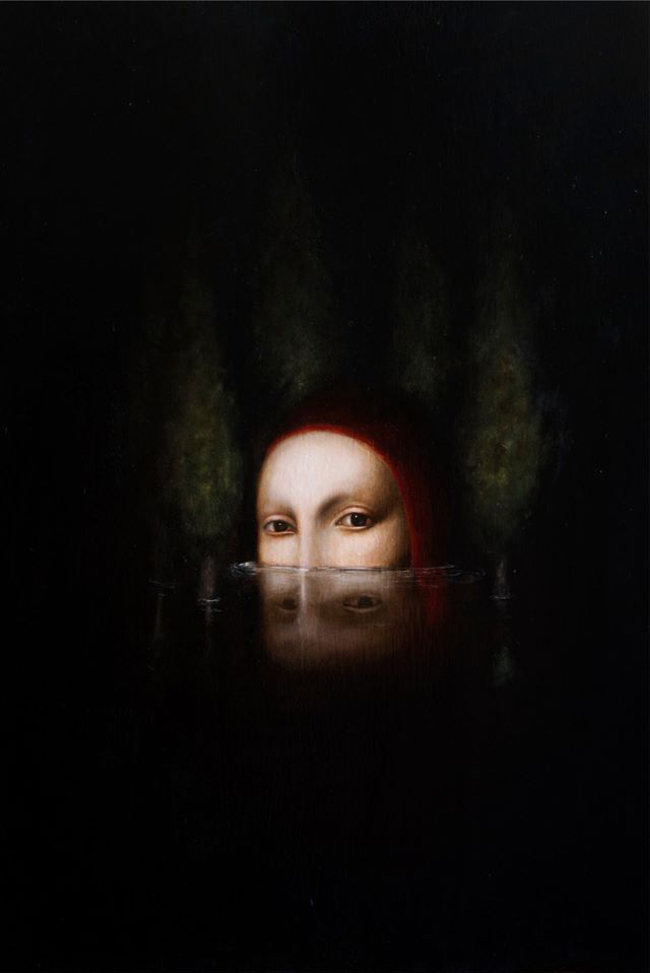 Hi Alessandro, thanks very much for making the time to join us for a chat, we really appreciate it. If you could please start us off by introducing yourself, touching on anything you feel relevant to story of Alessandro Sicioldr the artist?

Hello, it’s a pleasure for me to be doing this interview with you! I don’t think there is anything unique to tell about my life. I wake up every morning and paint until it’s evening. I also walk a lot by the sea or by the lake with my girlfriend. Everything would seem quite normal from the outside, this is because inner evolutions and experiences are subtle, not manifest. What happens under the surface of normality is what really makes the difference. Dreams, visions, fantasies and obsessions have been with me since my early childhood, and I sublimate them through art. 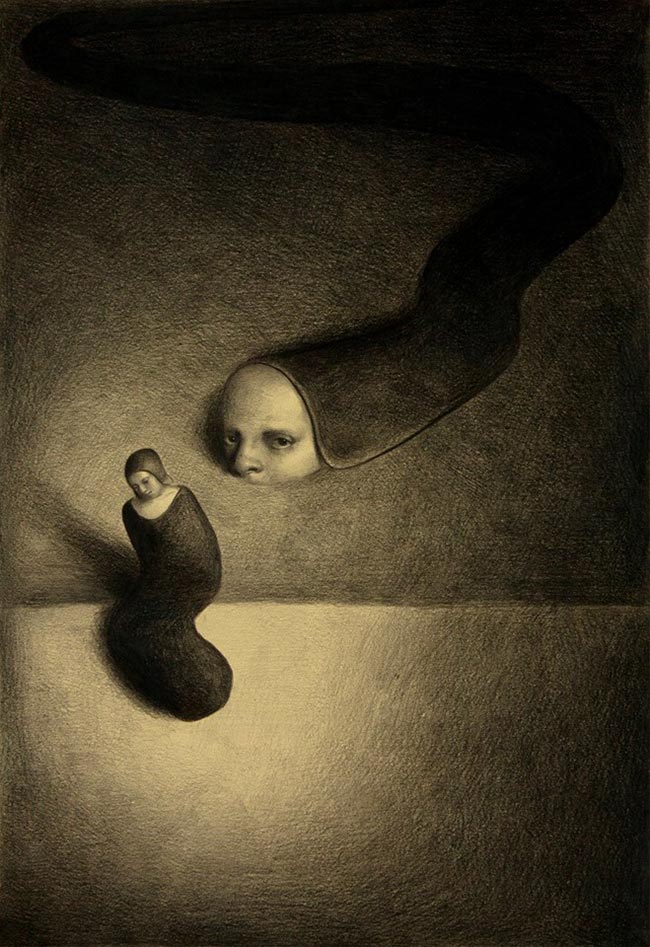 Being Italian, in what ways do you feel your home country has influenced your art and creative thoughts?

Italy is an archaic land and every part of it exudes thousands of stories and poetry. Every part speaks to our deepest part. Moreover, I have the possibility to study great art because it is everywhere. Not only the old masters works in the museums of Rome or Florence, which are really close to me, but even my home-town, Tuscania, is a place full of art and secrets. When I walk through the empty streets of the historical centre I can feel a sort of magic coming out and inspiring me. Every little town as well as big cities are coffers full of ancestral stories and traditions. 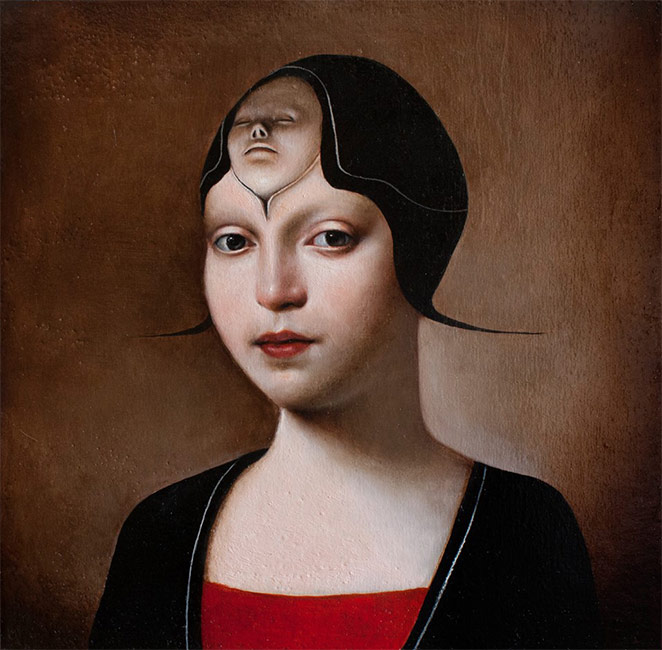 Your father is a psychologist and artist. Can you tell us a little about the influence your he has had on your creativity and your understanding of the role of the subconscious mind in what you create?

Being educated by a psychologist and artist like my father contributed enormously to my art. He taught me to recognize inner realities and to live a deeper life, but without losing contact with reality. Moreover he influenced (indirectly) my artistic tastes through the paintings on the walls of our home and through visits to museums. The cold and metaphysical atmospheres inspired by Piero Della Francesca typical of some art of Italian 20th century inspired him in his paintings and shaped my tastes toward the research of a psychological dimension.

What are some of the philosophical ideas that you find recurring within the images you produce?

I have some recurring archetypal themes that sprout spontaneously from my mind in my visions. The great mother, the devouring mother, the trinity, the abyss, the third eye. All of these symbols represent my current state of inner evolution. I give shape to inner characters that have something to say to me. An archetypal symbol is not an allegory but a door toward a world of meanings. 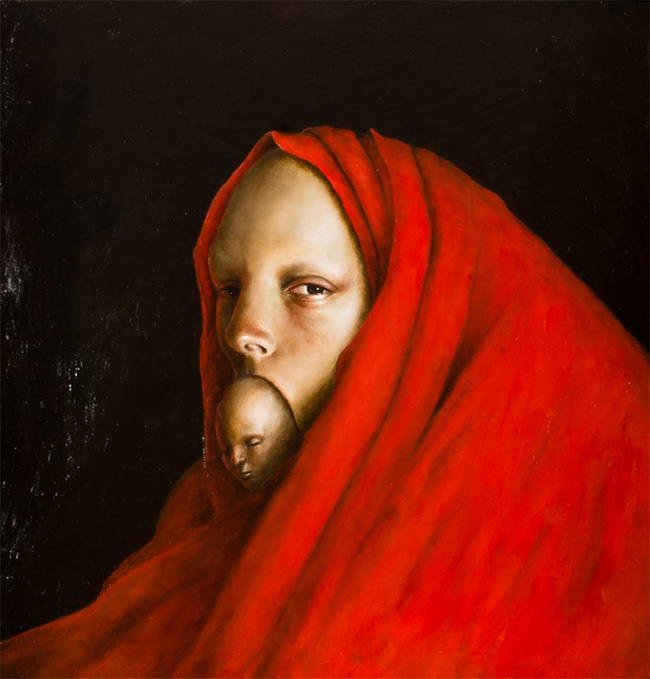 You have stated that you receive ‘visions’, and that they present you with a wealth of imagery and material for your artwork. If you could please give us some insight into how and when these visions present themselves to you and how you go about documenting and deciphering them, and ultimately composing artworks from them?

Maybe the word ‘vision’ could sound strange. I’m not a shaman taking strange drugs and having hallucinations. My visions are just images floating in the stream of consciousnesses, and I suppose everyone has them. My only capacity is to recognize when an image is important and fix it. Initially they are just quick impressions and I sketch them in one of my sketchbooks. This is the moment where the image has the greatest power in me. The painting or the drawing is a sacralisation of an idea, but the real idea lies in the sketchbook. I am very jealous of them, they are like a diary of inner exploration. 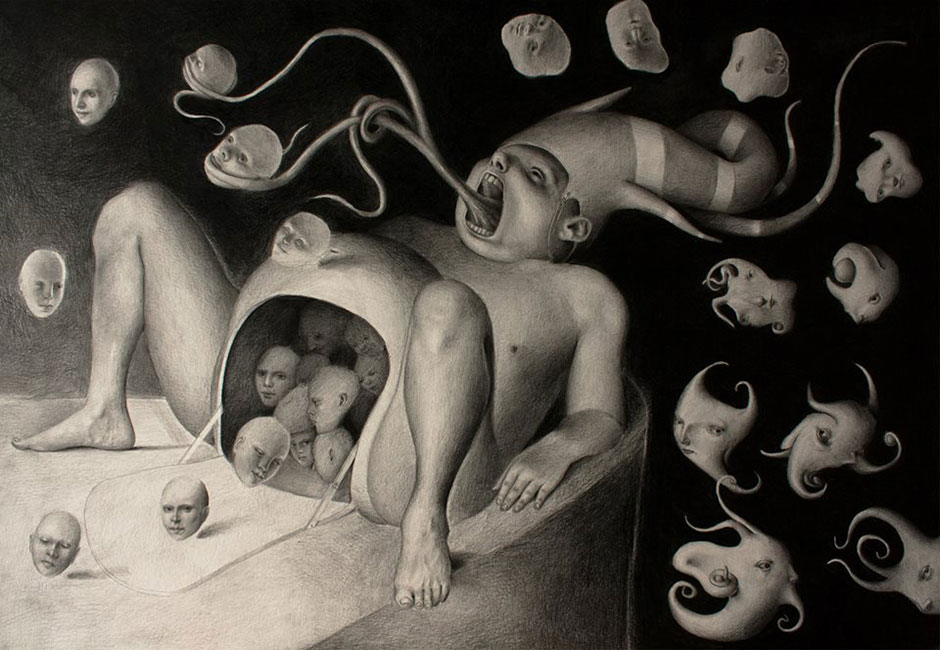 Many of the painting techniques you employ were first discovered by the old masters and you have an incredibly studious approach to learning from the past. In an era where our scientific discoveries and technological advances have allowed the development of new artistic mediums and methods, what is it about these age old ways that you feel is important not to forget? Also, can you talk to us about some of the painters you have particular fascination for and the techniques you have learned from studying them?

If you compare a modern painting to an old one you can see that scientific discoveries, new mediums and technological advances are totally useless when talking about painting. The quality of colours, the beauty of the composition, the technical capabilities, the concepts and the symbology was way greater in the past. I’m not a nostalgist, I just want to study from the best sources, taking inspiration from the entire history. I have a particular fascination for Italian Baroque painters like Cagnacci, Cavallino, Stanzione, Ribera, for Mannerism and for medieval art. I also love 19th century symbolists like Böcklin, Von Stuck, Spilliaert, Kubin, Klinger. I’ve learned from the past to paint in sessions and glazes, to put more importance on the complex effect of the image, rather than mere realism or details.

How important is the universality of your subject matter to you? Is it your aim to create timeless works of art, or do you feel that your themes and subject matter are rooted in the early 21st century?

In my opinion every piece of art should aim to universality, because it has to speak to the highest part of humanity, which is universal. The only thing that changes is the language an artist will use to express themselves. 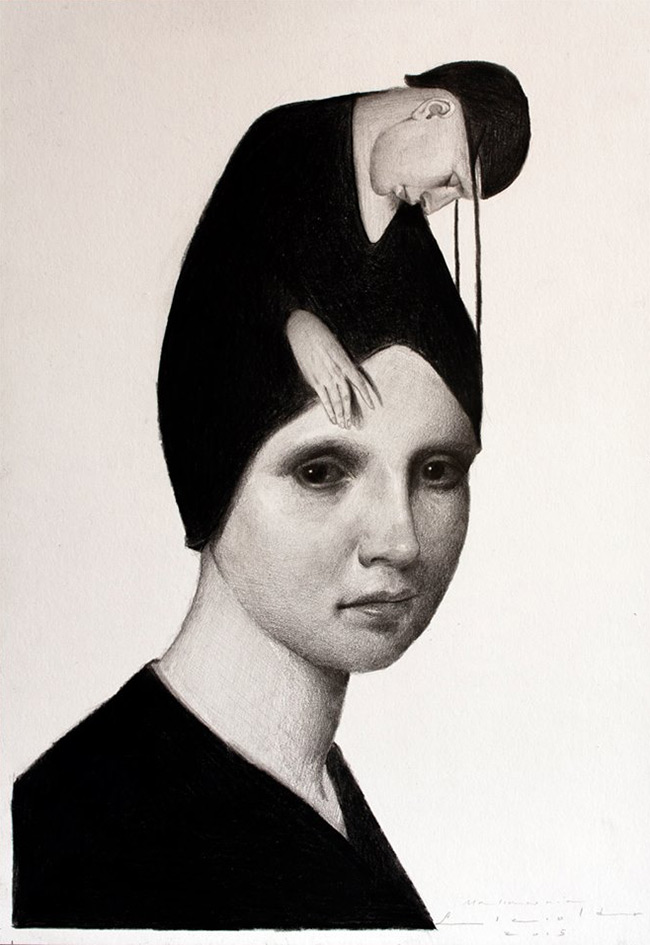 Please talk to us about how your thoughts on, and approaches to, the symbolic aspects of your work. Is the inherent symbolism in your images something you are aware of during the their conception and creation?

My paintings are not allegorical and I’m not aware of symbols in the early stages. I just feel that some images have an important meaning and I paint them. Only then do I begin to read their ambiguous meanings and interpretations. My works are like dreams (even though I usually don’t limit myself to paint representations of dreams), they come spontaneously and they need to be interpreted. 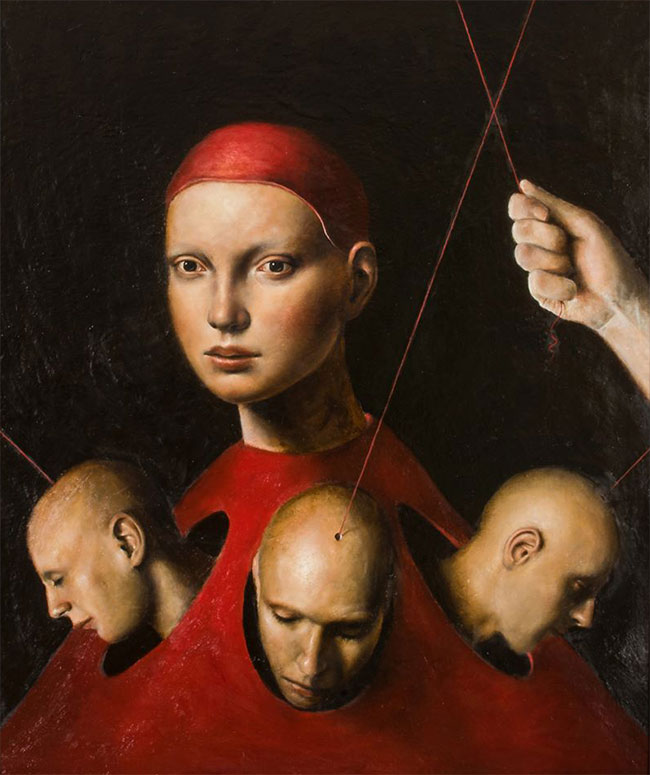 What types of reaction do you hope for your works to ignite in their viewers?

I never think about my viewers when working, I just paint my images with the maximum fidelity to the original vision. This is the reason why some images are really different from others. I’m not following a style or a fashion, I just want complete freedom of expression, and I don’t know (and don’t care) if my style will result in coherence. You can see works full of a human-vegetable chaos, cocoons with humans inside, as well as you can see simple and minimal portraits. If my personality and my soul is always changing and evolving why should my art be monolithic and coherent? 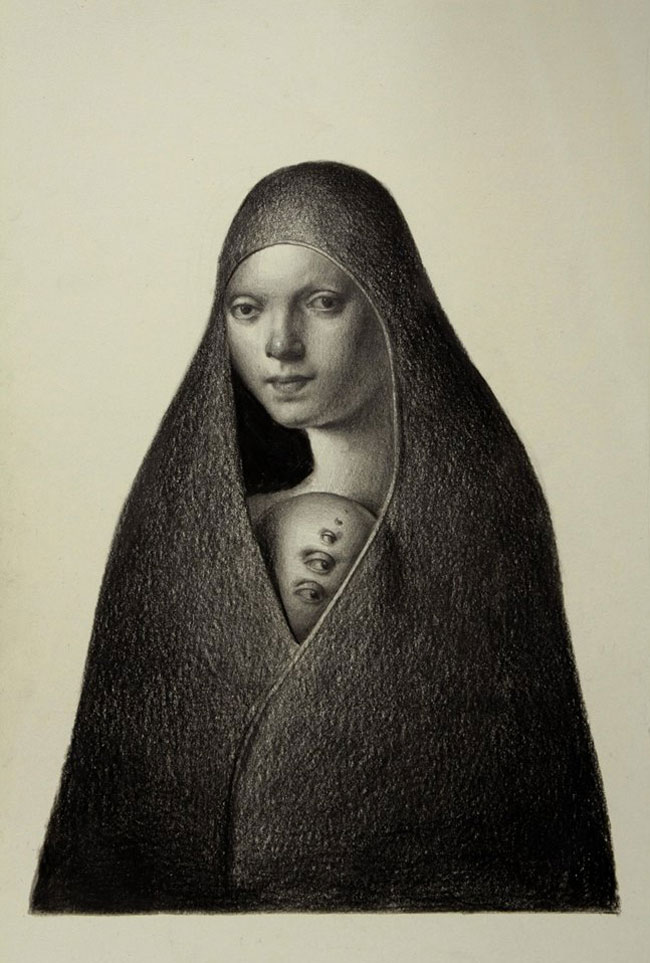 Keeping in mind your answer to the previous question, what are your thoughts about the dialogue and conversation cycle which is created between the artist and viewer?

I really like when viewers appreciate my works, and it is always a surprise for me because I don’t know when it will happen. Sometimes people almost cry, sometimes they are disturbed, sometimes they feel a peaceful sensation. I try not to think about people reactions when painting, I just think about the image, but, once the painting is done, I like to see the effect it causes on people, and I love to hear to their interpretations and thoughts. 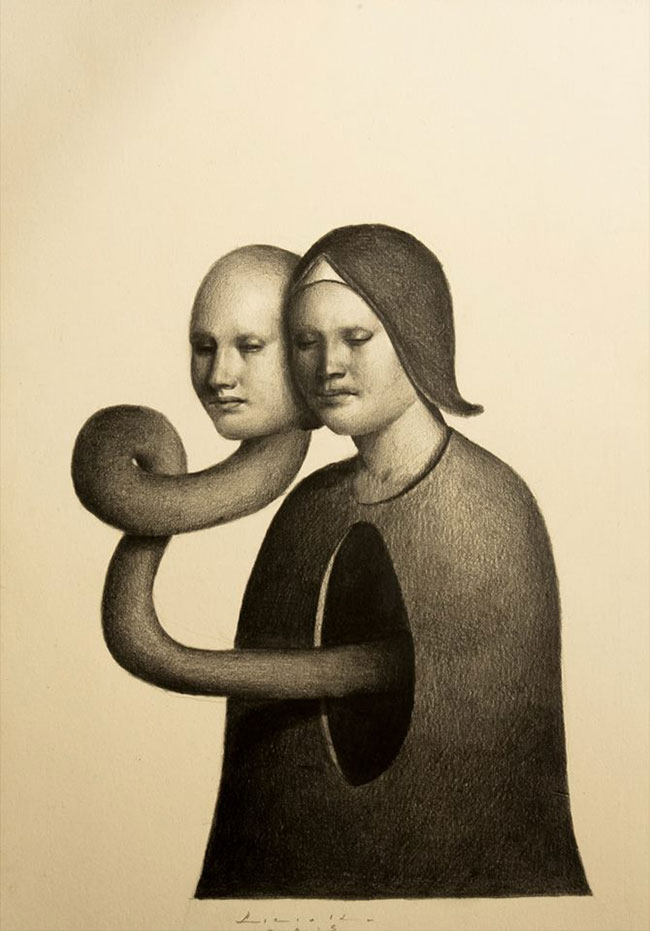 It would be impossible to find a particular story that shaped me and my vision. Every moment of my life shapes my artistic vision and I’m totally convinced that a small event, like a walk with the dog in an afternoon or a moment when you open the window and a gentle wind enters the home could contain a revelation that changes your life. Everything happens inside. 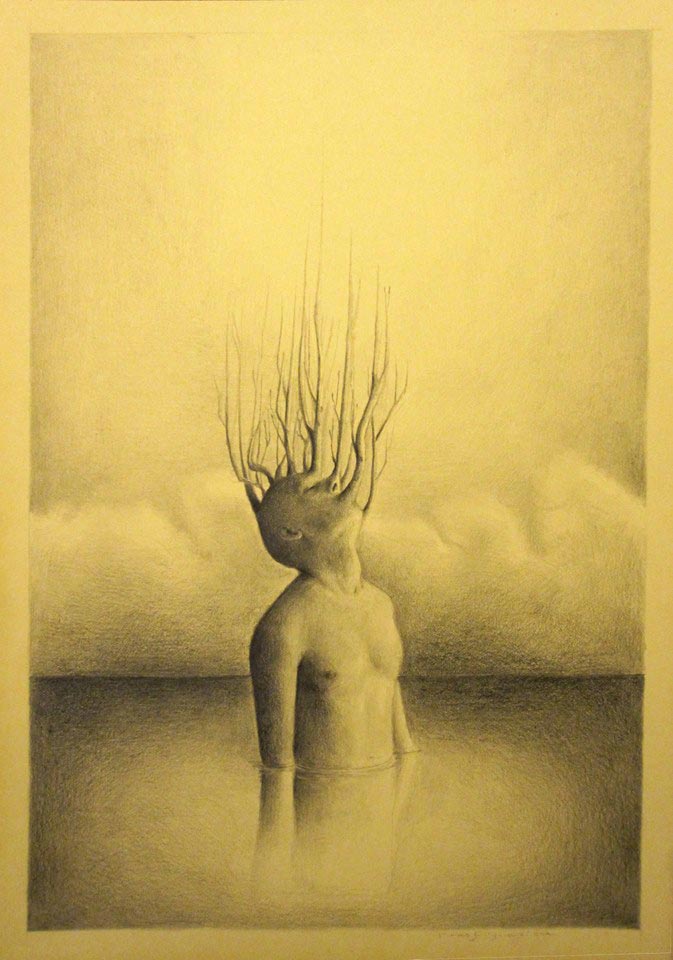 What is the most dominant source of motivation for you to make art?

I am an obsessive person, I’m totally, radically, obsessively captured by painting. It is like a ‘call’, or an addiction. I wake up early in the morning, I go to my studio and begin painting. I forget about my body and I paint for 5 – 6 hours without a stop, without drinking, without eating. When my eye vision begins to blur, I stop, then I eat and paint for another 5 – 6 hours non-stop. Why do I do this? How could I know? There is a strong urgency for me to express myself through images, that I can’t control. 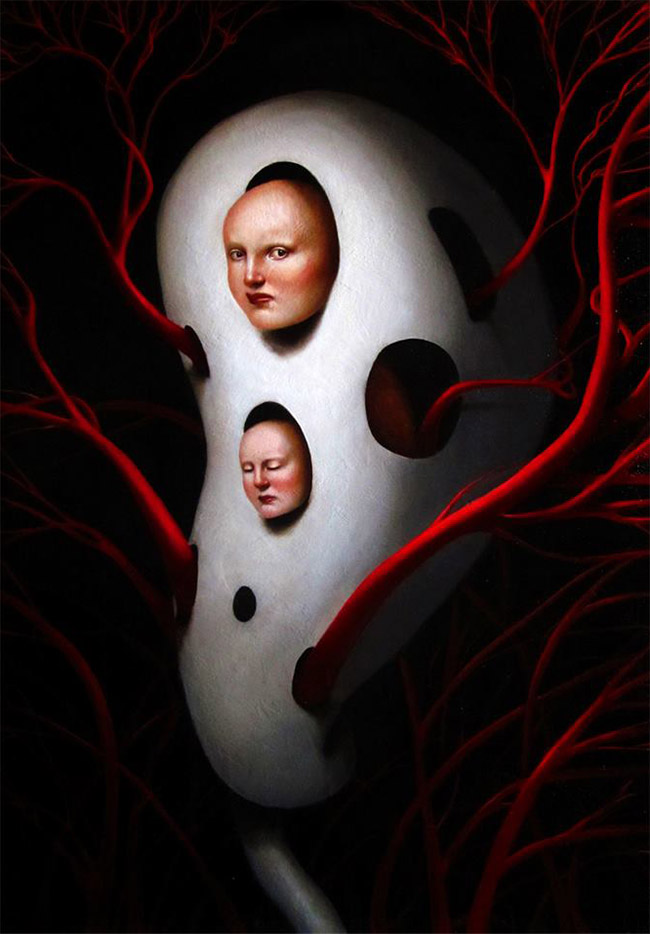 What’s next for Alessandro Sicioldr?

I will try to continue painting every day. Moreover, I am exploring and experimenting with new media and new techniques, even digital, in order to merge the quality of the past with the possibilities of our age. 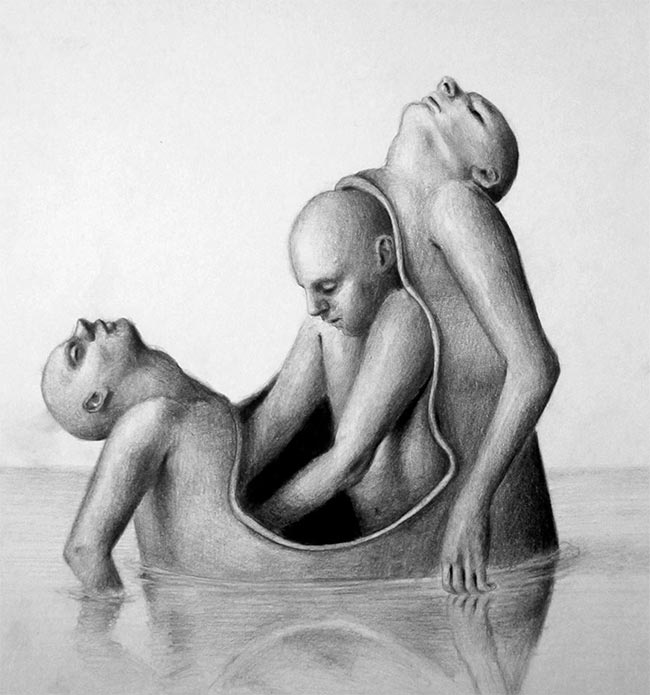 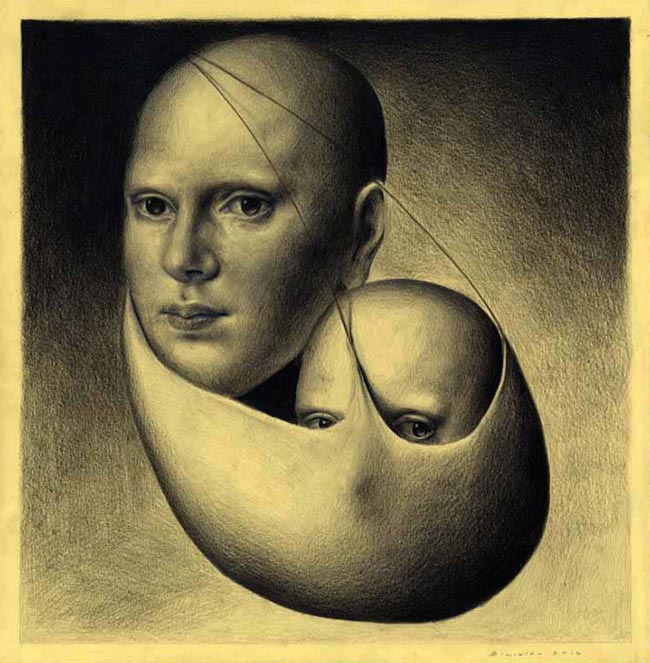 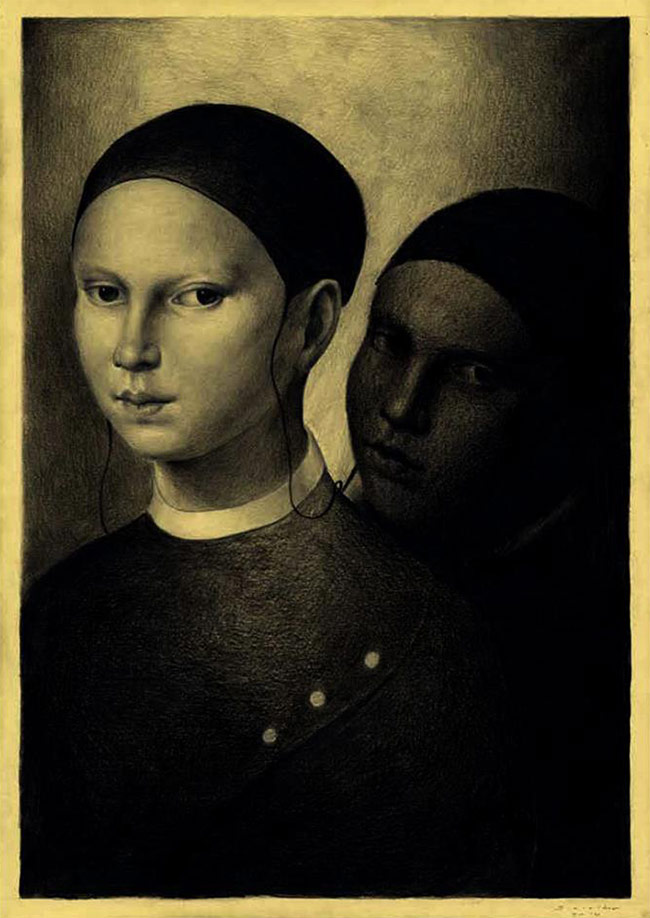 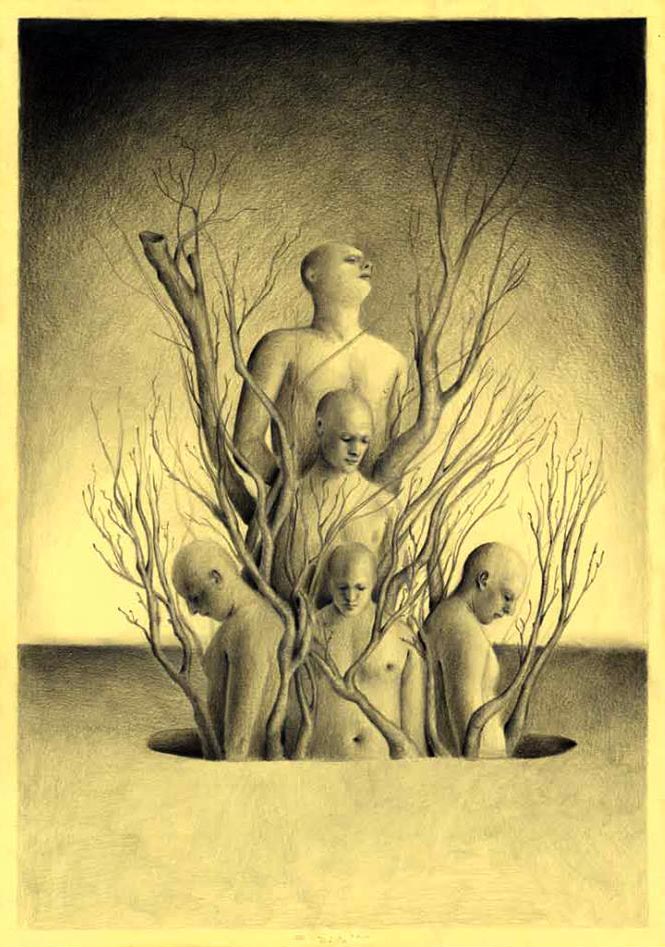 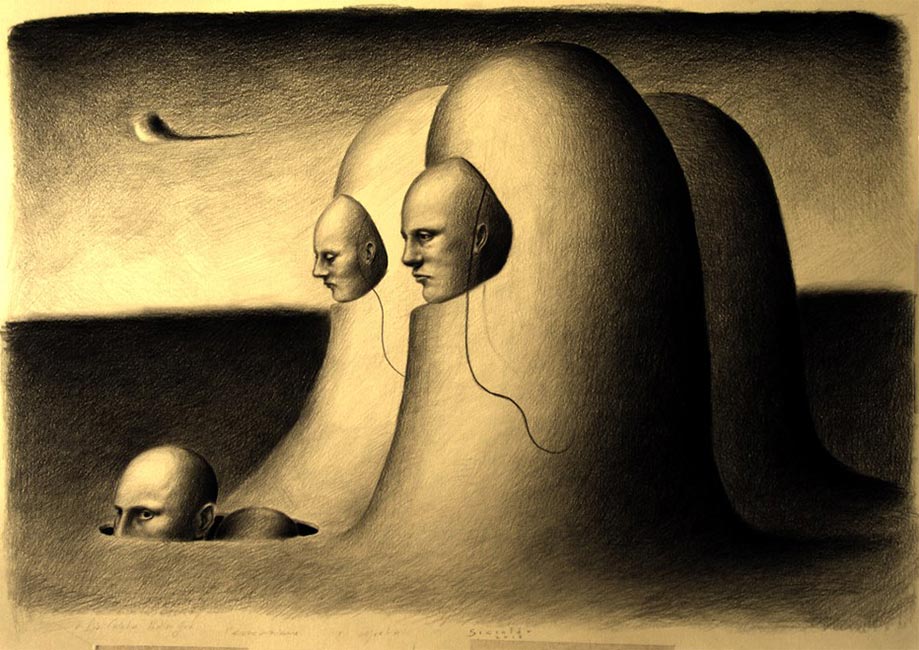