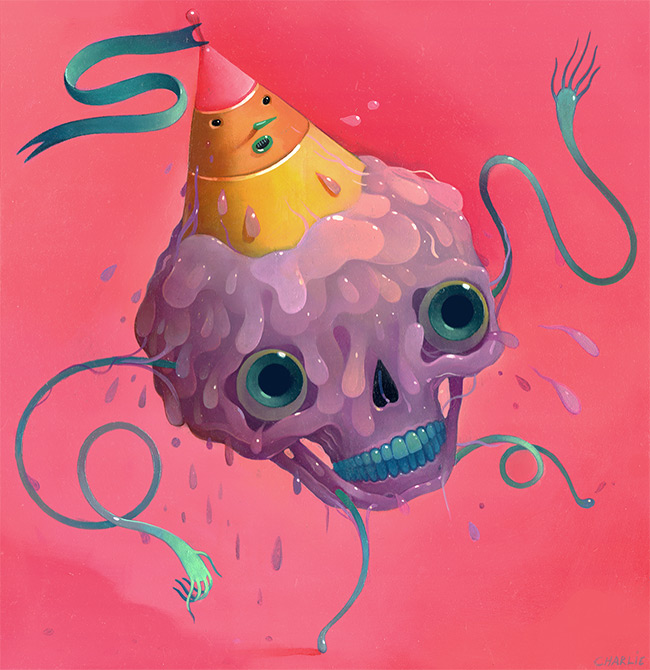 Charlie Immer’s spectacular and surprisingly inviting world of candy-coloured-gross-out-flavoured mayhem offers truly wondrous visual feasts for those of us who are unperturbed by oodles of goo, slime, blood and the occasional severed head. Due to the jubilant carnage occurring between Immer’s protagonists and their merry little victims, who incidentally range from dancing skulls dripping with jellied ooze, to fruity characters in varying stages of dismemberment, one cannot help but get swept up in the high spirited horror and overall exuberance on display. These expertly rendered gory happenings carefully tread the fine line between repulsion and attraction, exploring the duality that exists and striking an extraordinary balance; the result is a masterclass in titillation, that also succeeds in tickling our funny bones.

Charlie Immer is an American fine artist and illustrator. He was born in 1983 and started out life in Maryland, although he now currently lives and works in Los Angeles, with a collection of skeletons and candy. In 2008, Charlie graduated with distinction from the Rhode Island School of Design in Providence, gaining himself a BFA in Illustration. His artwork has since been shown in prestigious galleries around the world, and has also been published in prominent art magazines, such as Juxtapoz and Hi-Fructose, earning him a large following and considerable acclaim.

WOW x WOW is delighted to have recently caught up with Charlie and entered into discussions about his fabulous imagery and the thoughts and inspiration behind it all. We’re also super excited to have Charlie contributing work to our upcoming exhibition, ‘Lightining Bolts & Little Sparks’, opening on 2nd June, so be sure to check that out. We hope you enjoy reading our exclusive interview and learning more about Charlie’s ghoulish creations. 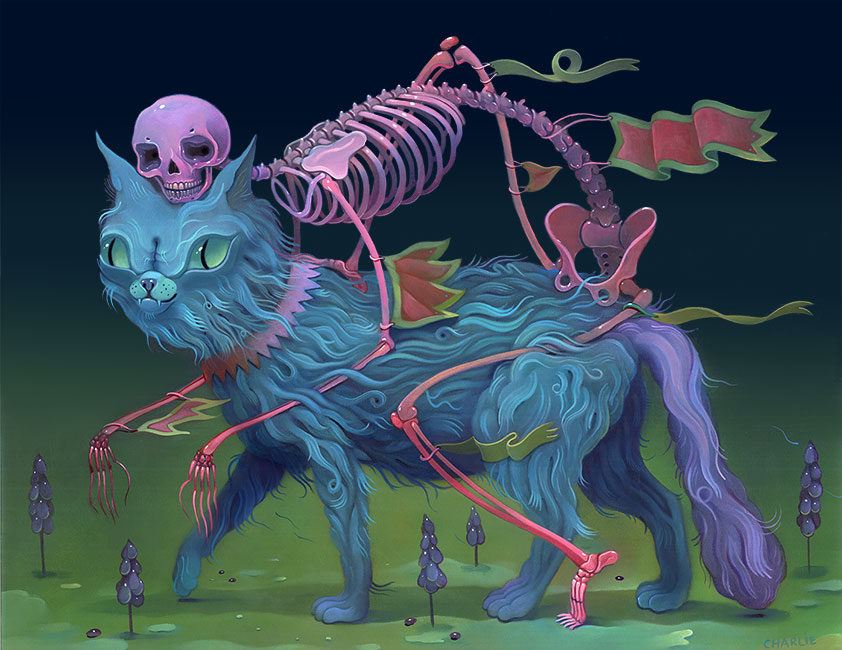 Hi Charlie! First of all, thanks for agreeing to free up some of your valuable time in order to have this wee chat, we really appreciate it. If you could please start us off by introducing yourself and talking about your background, touching on anything you feel has been relevant to shaping Charlie Immer the artist?

Thank you for having me, I’m always down to discuss glistening, creeping skeletons and flayed fancy jiggling jesters.

By far my largest influences were a scene in ‘Return of the Living Dead’, involving what I later learned was called the ‘Tar Zombie’. A sparkling skeleton festooned in black ooze and tattered clothing chasing people in a basement. Then there was the ‘Skeleton Dance’ cartoon which I would watch on repeat and drive my parents nuts. The slapstick nature of the cartoon, mixed with horror elements, really took hold in my mind. I can’t believe that I still draw from these experiences and that I still find ways to use them as inspiration. 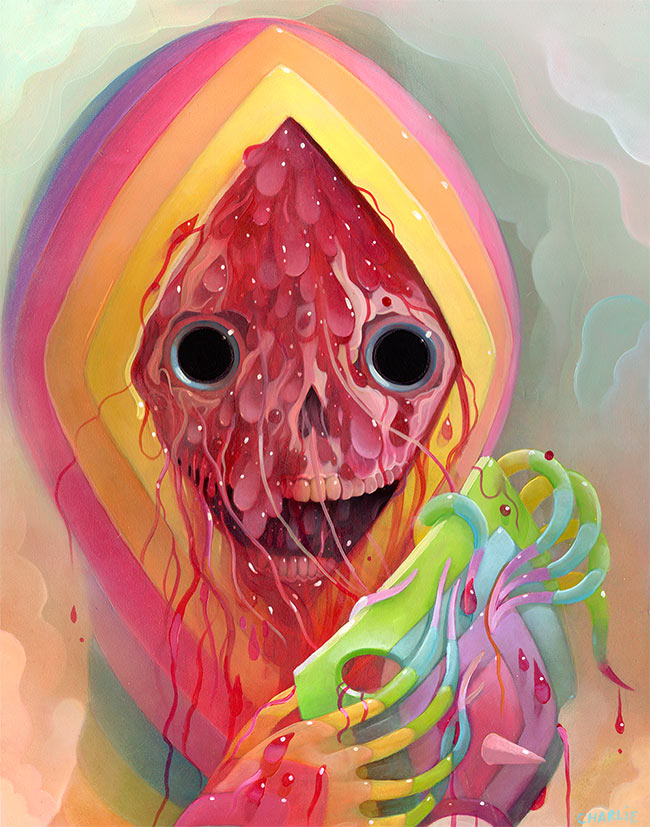 I’m currently living in Los Angeles. It has a great art community. I’m not very involved, but I only have myself to blame. I try to go to shows, but I don’t make it out that often. I tend to keep to myself mostly. I do use social media to stay connected to the community and see what other artists are working on.

Once you have an idea for a painting, what’s next? Do you use any reference, or does what you create come entirely from your imagination? If you could give us some insight into how you tackle the creative process?

It’s usually a combination. I tend to look at references before I start working on a piece. I like to try to remember what I saw, instead of using it directly as I create a painting. The most mentally taxing part of creating a piece is the drawing phase, so many things to decide, just how much skeleton should be visible? The painting phase takes a lot more time but doesn’t strain my mind as much and I get to make fun decisions like where does the slime go? How much fruit is too much? 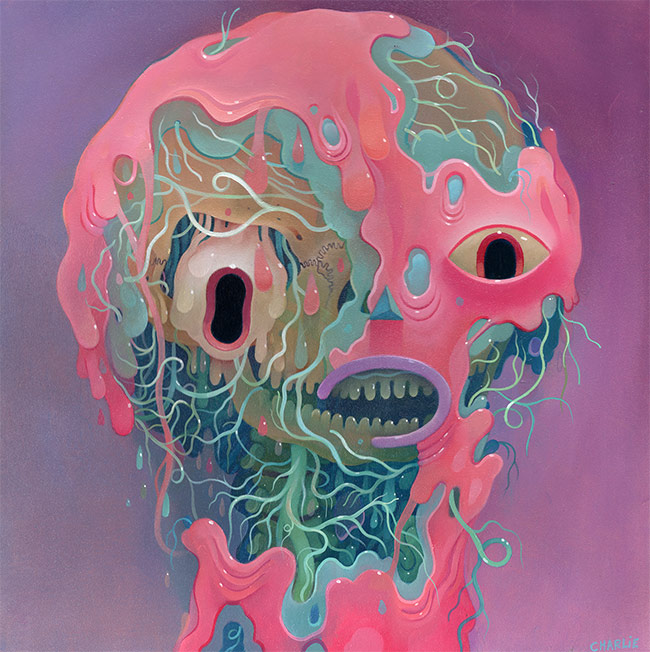 A distinct duality arises between the ‘delicious enough to eat’ and the ‘gory enough to make you puke’ aesthetic your images deliver to the viewer. In your world, violence contains no malevolence and it appears to be as pleasurable an experience for those on the receiving end, as it is for those dishing it out. This gives rise to a whole host of thoughts about our own pain and mortality and also our desensitization to violence, yet you manage to keep the proceedings humorous and light-hearted. Please tell us a little about the initial thoughts you had when you were laying out the concept of what you wanted to explore within your painted universe?

It’s fun to strike the balance between revolting and inviting. I’ve also always been interested in the contrast between the relatively simple outward appearance of my characters and the vast complexity of the anatomical systems just below the surface. And the story in my head is that no one feels pain and all are having fun; I hope that is conveyed in the work. I want to make people laugh at a creature being sliced up like a banana or having their severed head rolling down track like a gumball or someone fertilizing a strawberry plant with their gooey blood. 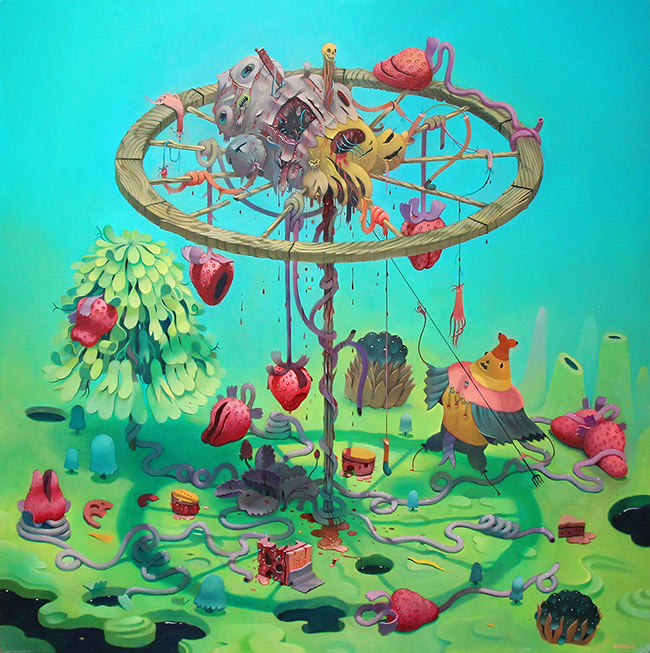 Colour is of great importance to the atmosphere you inject into your imagery. It takes great skill to balance a wealth of vibrant colours within one image, something that you achieve with great aplomb. Do you create colour studies before starting work on your finished pieces or do you just dive straight in and see what happens? What are your thoughts about colour in relation to your imagery?

Color is weird for me. I’ve never felt like I have a strong grasp on how I want to use it. I feel colors out as I go and I repaint things a lot more than I would care to admit. I try to use unexpected colors and tend to lean toward pastels which can create a more soothing and less oppressive atmosphere in my work. They also give my subjects a dessert or toy like appearance.

It appears that you take great pleasure from exploring the anatomy of the characters you create. Do you remember a particular incident or time in your life that sparked your fascination with how living things are constructed?

It was watching gore movies at 4 years of age and somehow being fascinated and not scared and repulsed and mixing that with cartoons. My parents initially hoped I would parlay that fascination with viscera into a medical career. It surprised them where I took it in the end and I think they enjoy it. Who wouldn’t like to say, “My son pays his bills with bones and blood.”? 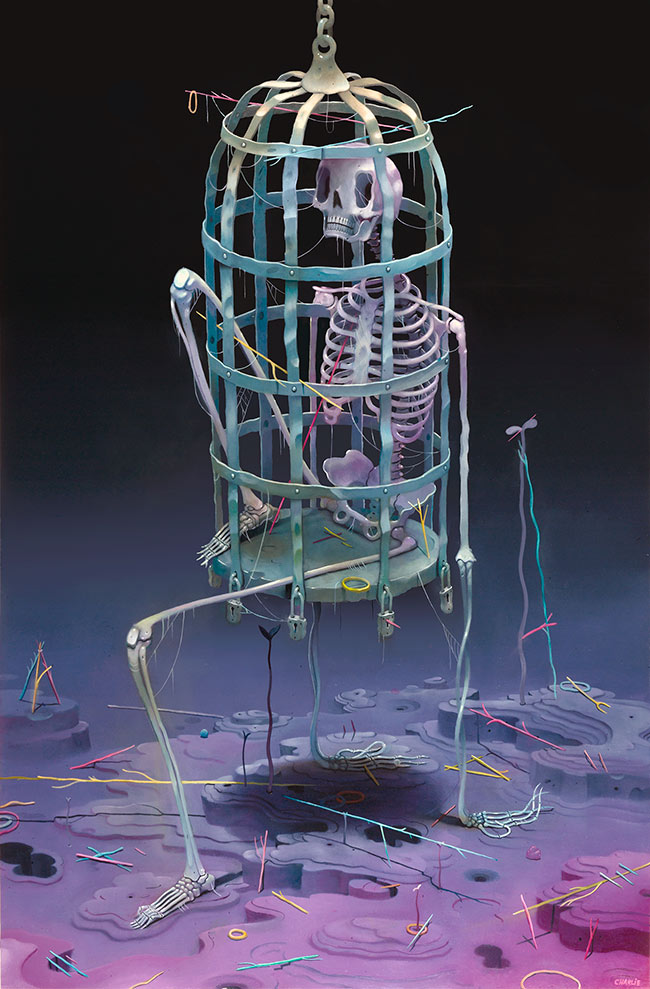 Your work is so imaginative, we can only assume that your subconscious mind plays a huge role regarding ideas. Do you have a specific time of the day when images are more likely to pop into consciousness, or do you have any special techniques that you employ which aid ideas rising to the surface?

I am very much a night time person, I love the quiet and the isolation. I find that my ideas come mostly when I’m by myself playing video games. Especially when I play games from the 8bit era. I love the compartmentalization of those games and their clear visual language due to the extreme limitations of the hardware. I think about painting that way. I like having a set of rules and things I want to accomplish in a piece. It helps a lot. I have too many ideas and I need restrictions to get anything done. 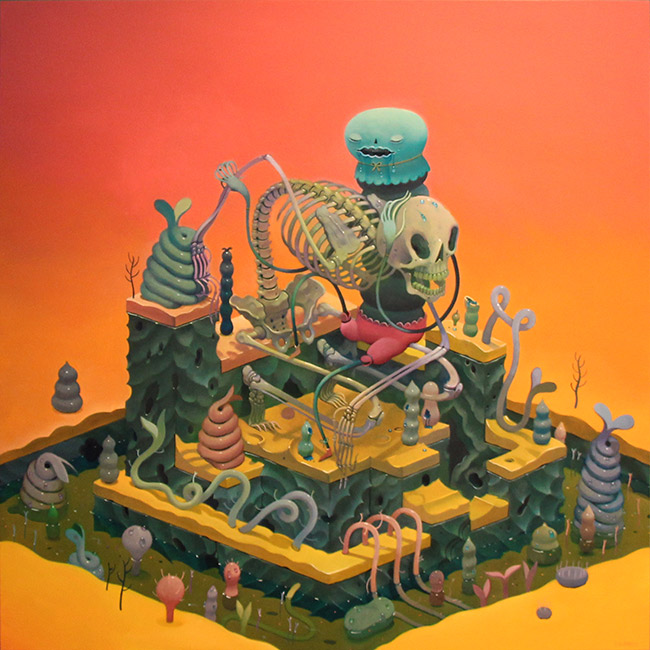 My themes are similar but I think I they have been refined. I have also become more proficient at creating the images I have in my head. In the past few years I have really tried to push myself and have more variety in my paintings. With the pieces I’m working on now, I gave myself the goal of creating more dimensional depth. I always want to surprise myself while still creating work that is unmistakably mine.

Which of your own creations do you feel has been the most successful and why?

I was really happy with the way ‘Puncture Juncture’ came out. It was a piece I made after I mandated that I need more visual variety and complexity in my work. The atmosphere and the color came together in the way I intended. I’m proud of the rendering of subjects and especially the stone. 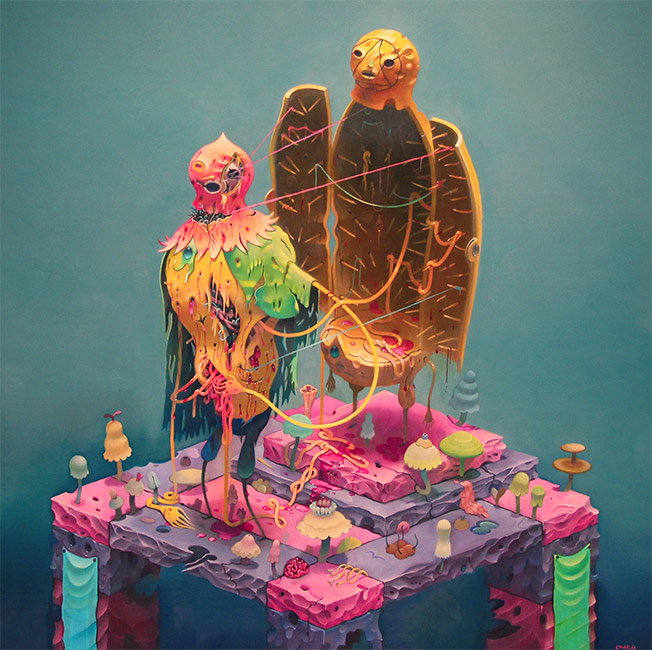 What is the most memorable thing anyone has ever said about your art?

“I want to taste that!” – Someone referring to a severed head leaking a purple fluid.

You have very deservedly made a name for yourself within the New Contemporary Art movement. What are some of your thoughts about the scene and what are your hopes for its future?

Yikes! I think about this a lot. I’m glad to be a part of such an exciting and surprising movement. There are so many voices and I’m amazed by how many are so distinct. I’m always relieved by how unpretentious it is. I hope it remains this way. 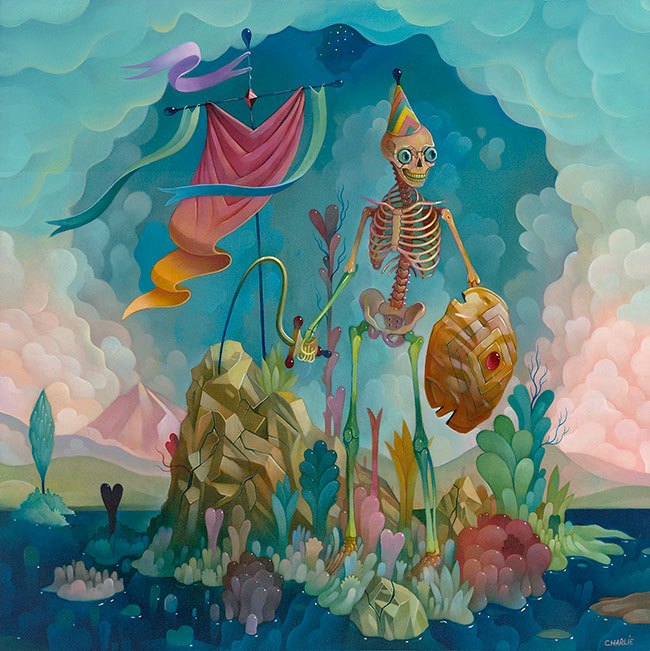 Definitely Pieter Bruegel’s ‘The Triump of Death’. It’s such a dense work. There are so many insane details. An army of skeletons running amok and indiscriminately killing. I know it’s a serious piece, but I can’t help but detect some silliness as well, though I’m probably projecting. Plus, skeletons look inherently goofy to me, they are always grinning.

What’s next for Charlie Immer?

I have a solo who coming up at CoproGallery in the Fall. It’s going to be ultra violent and ultra silly! 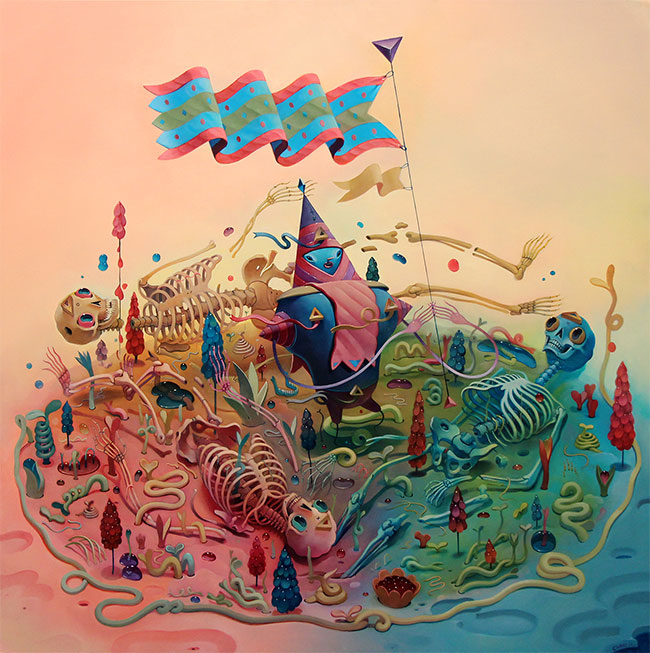 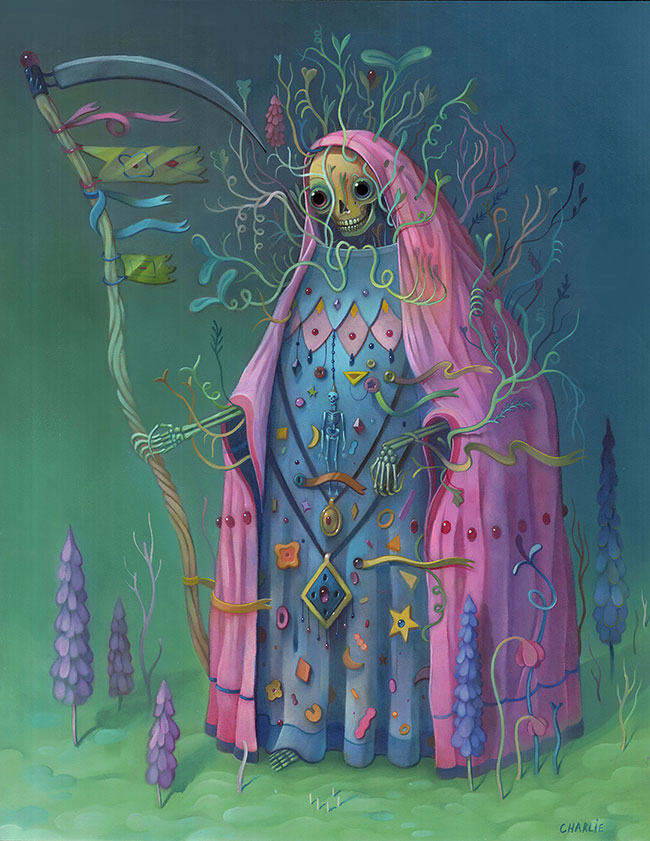 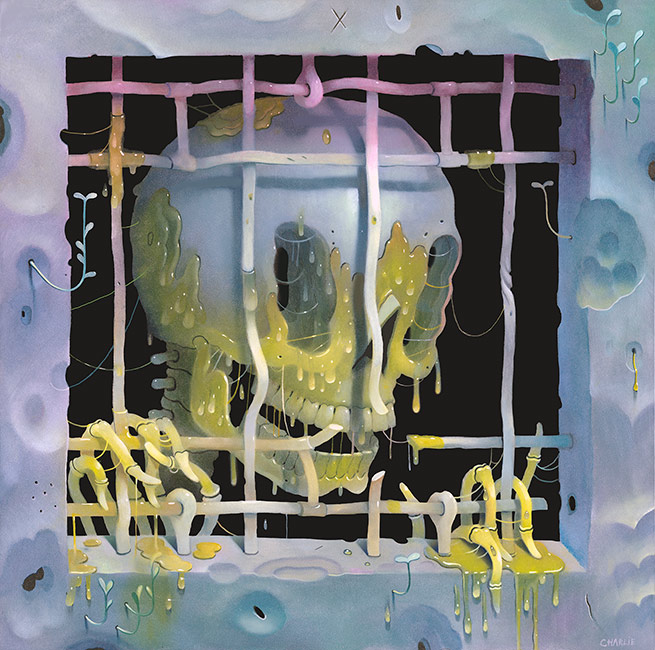 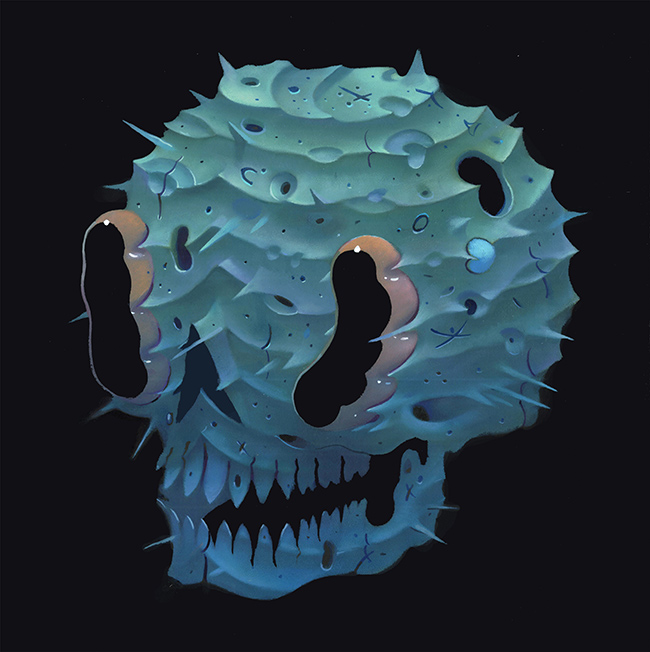 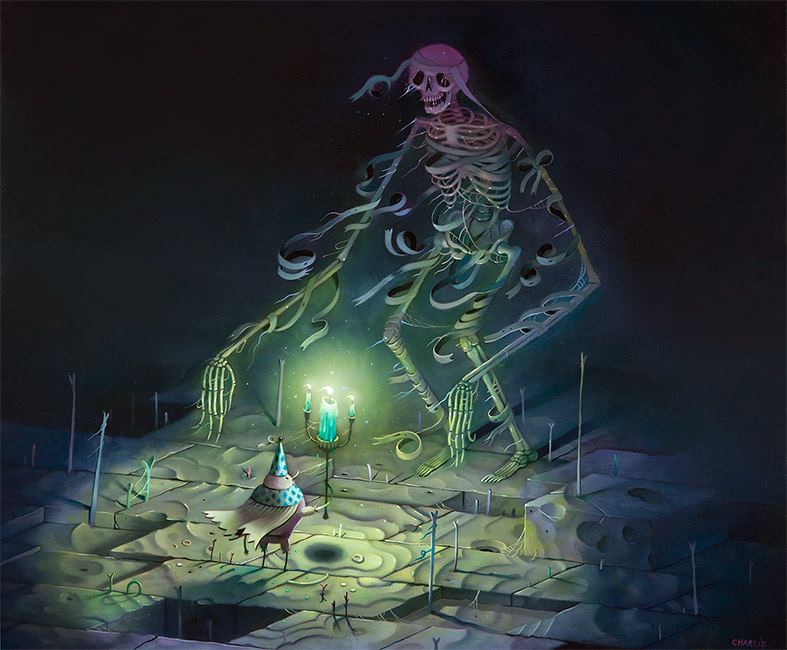 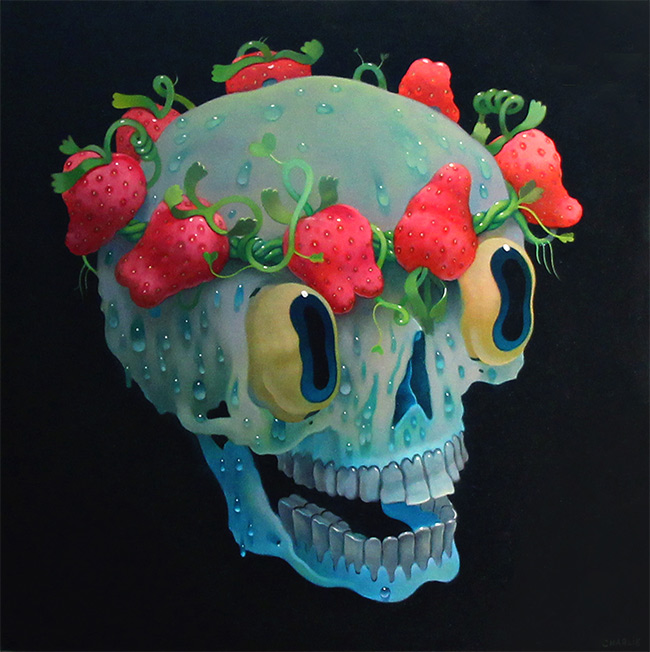 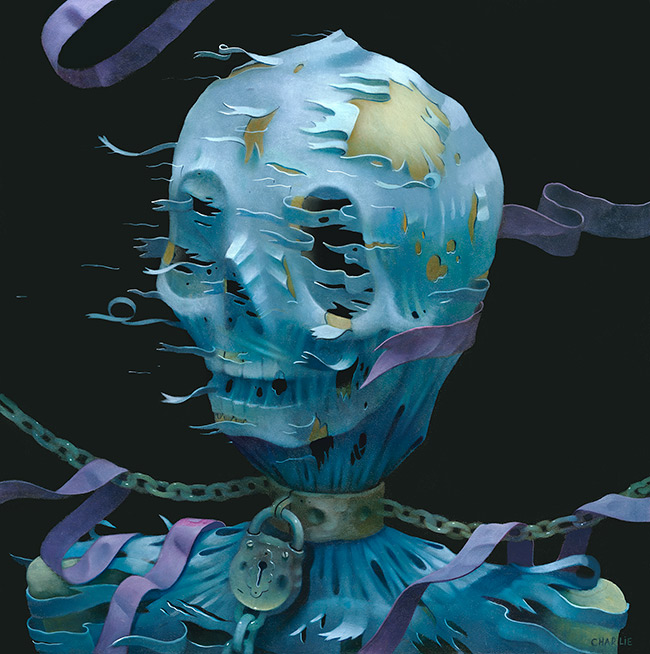 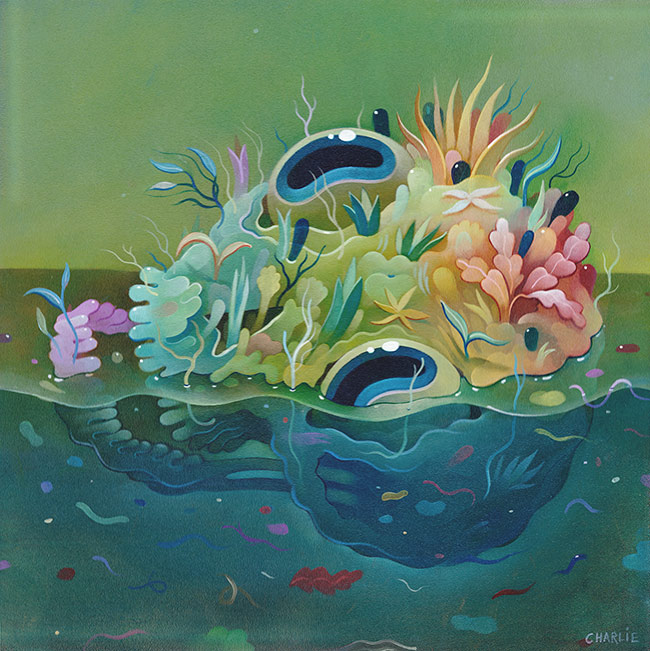 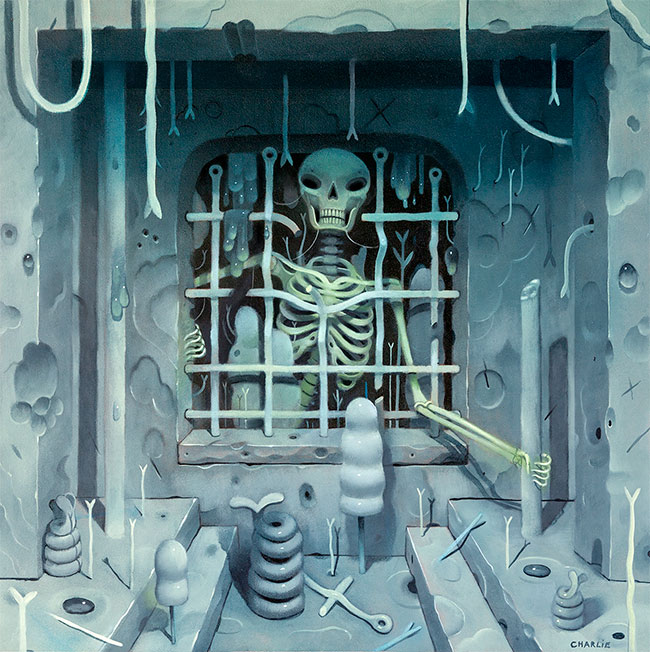 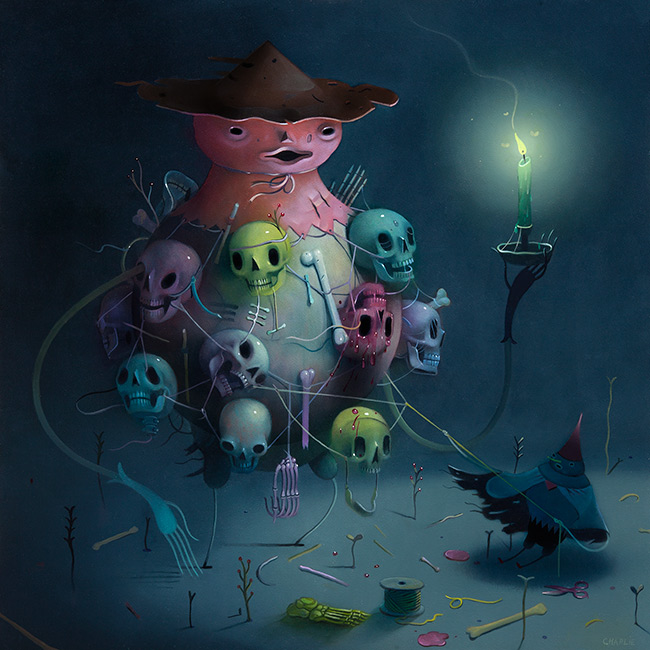 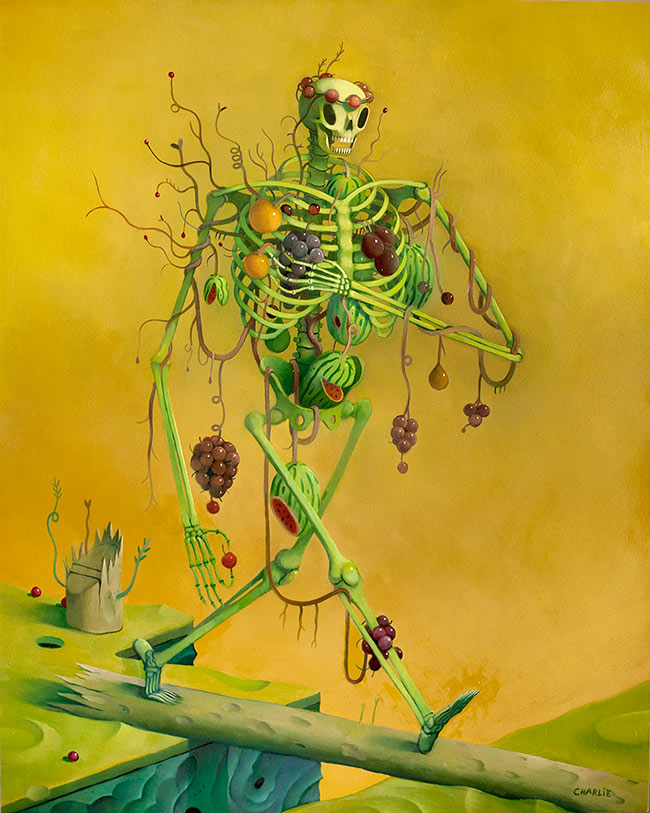 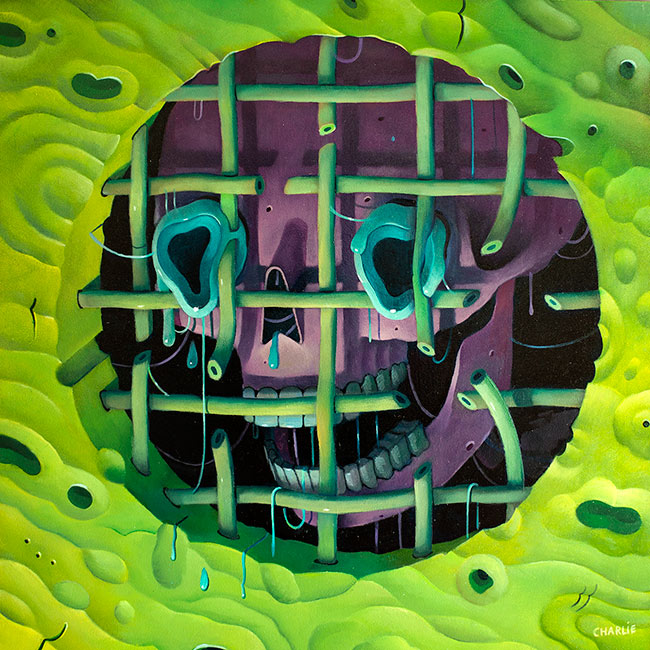 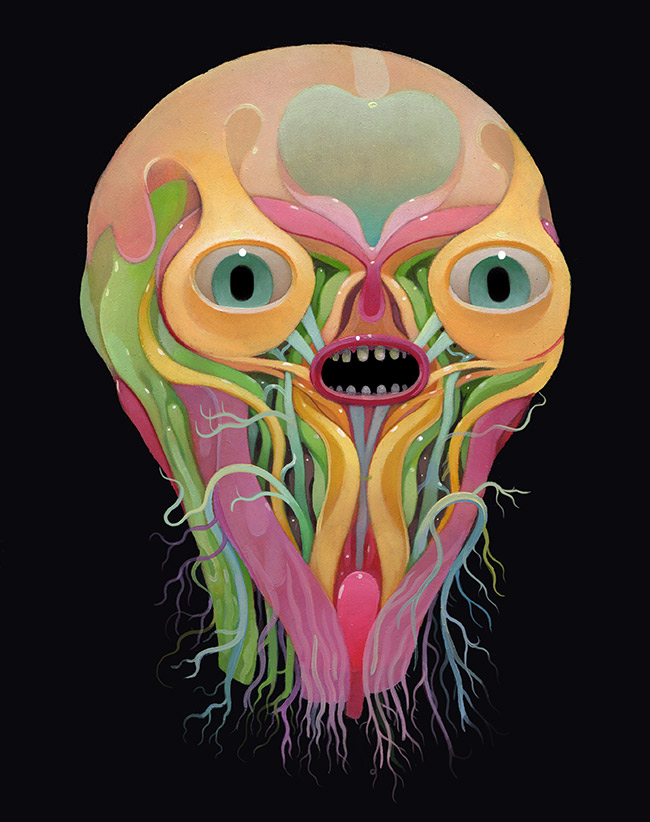