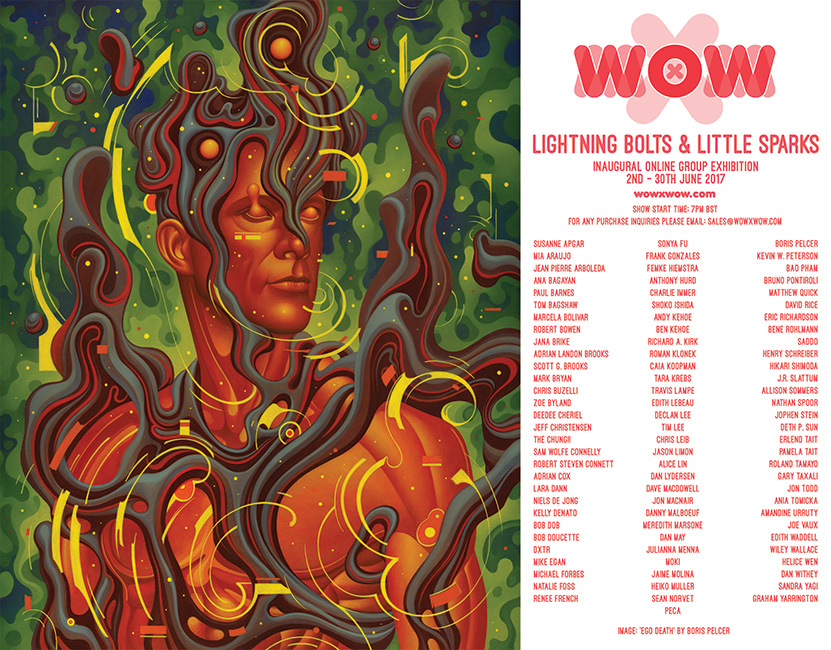 Hey everyone! There are some very exciting things afoot at WxW HQ, that we’ve been itching to tell you all about! In this post we’ll focus on our first big announcement, which is, that we’ll be launching a WOW x WOW online gallery on 2nd June!!! The inaugural group show is of epic proportions and will feature new and unexhibited works from over 90 incredible artists from around the world, the large majority of whom we have either interviewed, published or profiled here on wowxwow.com in the past. The exhibition is entitled, ‘LIGHTNING BOLTS & LITTLE SPARKS’, and we feel that the lineup gathers together a powerful roster of both established and emerging talent from within the international New Contemporary Art movement.

With this new gallery platform, we intend to take a step back from any of the restrictions that ‘themed’ group shows can impose on an artist’s natural expression, and instead provide a stage for participating artists to showcase new pieces from their personal and ongoing output of work.

The inaugural show title, ‘LIGHTNING BOLTS & LITTLE SPARKS’, is a metaphorical reference to both the ‘eureka’ moments and the smaller inspirational steps forward that are experienced by every artist; all of which are significant and of relevance to the continual growth and development of the true artistic voice of each creative individual.

We’d really appreciate you spreading the word to anyone that you think might be interested, and please keep visiting wowxwow.com regularly between now and June, for any updates and more news about the show as it unfolds. We will also be publishing interviews with several of the participating artists over the next couple of months. We recommend that you keep your eyes peeled to our social media channels too, as we will be posting sneak peeks of work from the show in the run up.