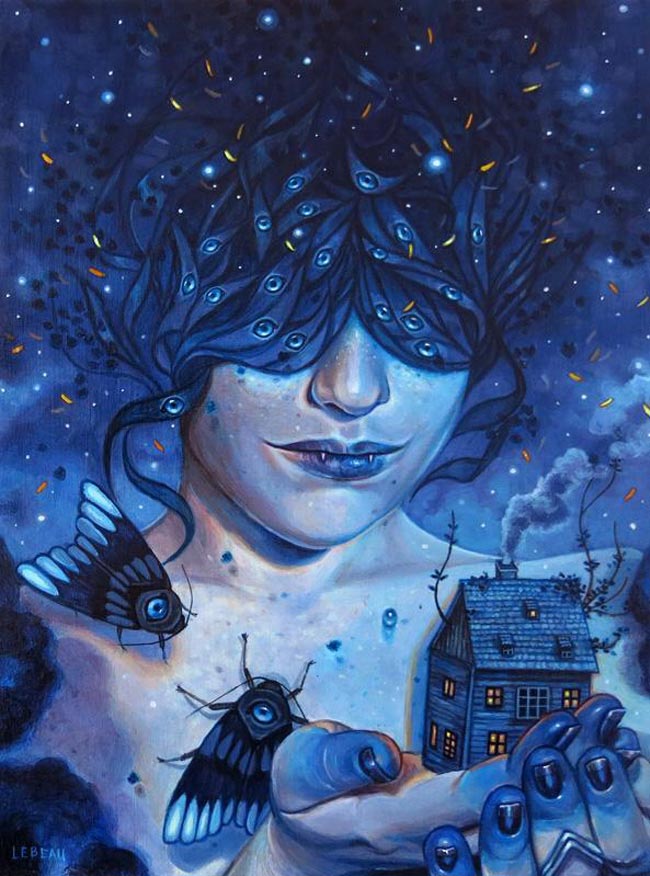 Edith Lebeau is a Canadian artist whose figurative works are predominantly centred around the strength of her female subjects. Through her intelligent and symbolic use of flora and fauna motifs, Lebeau’s works transcend being straighforward portraits and alternatively lead us into realms of mystery and intrigue. Finding inspiration amidst stimuli containing a darker aesthetic, Lebeau frequently imbues her work with sombre tones, which add auras of atmospheric tension. The facial expressions of Edith’s protagonists are of paramount importance in providing clues to the direction of her narratives. These narratives however, are something that Edith will often intentionally blur, wishing instead for each painting’s subject to question the viewer and invite us to participate in a conversation which will ultimately lead us to own conclusions.

Edith is based on the northern shore of Montreal, Quebec. Her work has been exhibited worldwide, in the likes of Berlin, Rome, Los Angeles and New York. Lebeau is also a member of PRISMA, an international artist collective curated by fellow artist Kaspian Shore.

WOW x WOW were recently fortunate enough to have had the opportunity of asking Edith a few questions about her life and art practice. Read on to find out what she had to say. 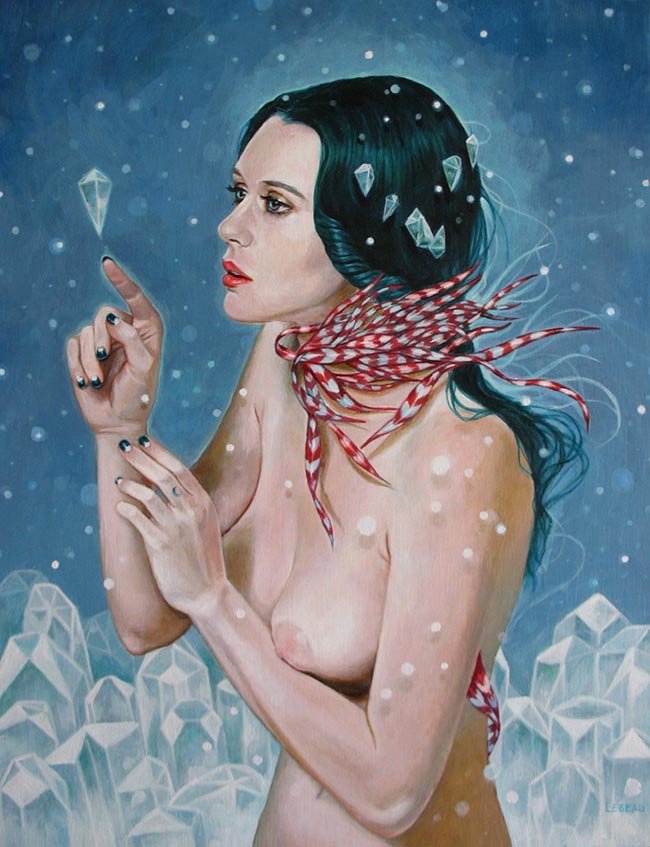 Hey Edith, thanks for taking the time to join us. Firstly, can you tell us a little about where you live?

I live in Laval, in the north shore of Montreal, Quebec. I’m very comfortable in my apartment so I don’t get out much, especially during winter, since it’s very cold here. Right now I’m pretty much in hibernation mode ( sleep, eat, sleep, paint, sleep…).

Please tell us about your creative process?

It starts with an idea that usually pops into my head by itself. Then, when I figure out more clearly where I want to go from there, I do a photo shoot with a friend. Afterwards, I sort through the pictures and pick out the one that shows the emotion that I want, then I do a sketch. Once it’s done, I project it onto the canvas or panel and I’m good to start painting. I usually start by working on the face or on the background. The background helps to set the color palette. As for the face, it helps to set skin tones and also I feel I can relax more once it’s done. The expression is the most important part for me. 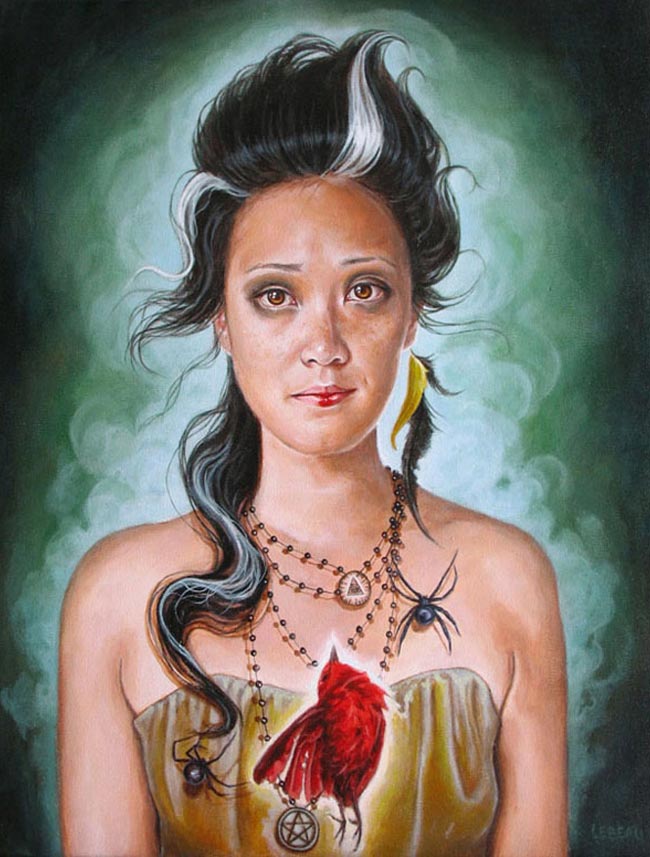 Both your parents were artists in their spare time. Was this important to your early development and did you get a lot of encouragement growing up?

My parents were interested in the arts, so of course when I was a kid it had a big effect on me. My dad would draw and paint with me. We would go to the mountain and do still life drawings and during summer we would paint outside. My parents encouraged me to take private art classes as a kid and when I decided to pursue a career in the art world, they supported me. 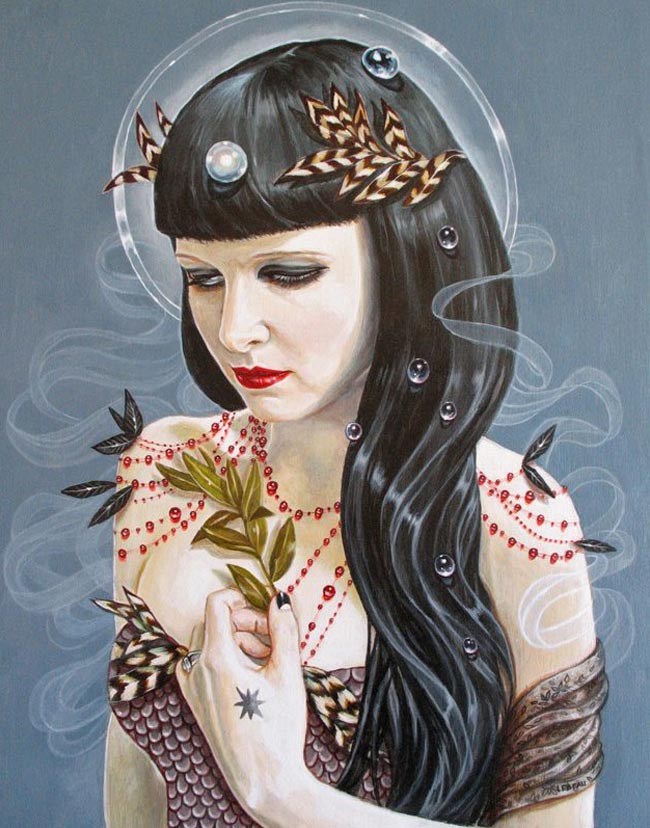 Regarding the portrait aspect of your work, how important is it for you to paint people that you know and how do you go about choosing a person to suit a particular painting idea?

Most of my models are friends of mine. I paint people that inspire me and that I have admiration for. I mainly use the friends with whom I feel most comfortable. I will choose my model for a particular project based on the expression, trait and the mood that I want to create with the painting. 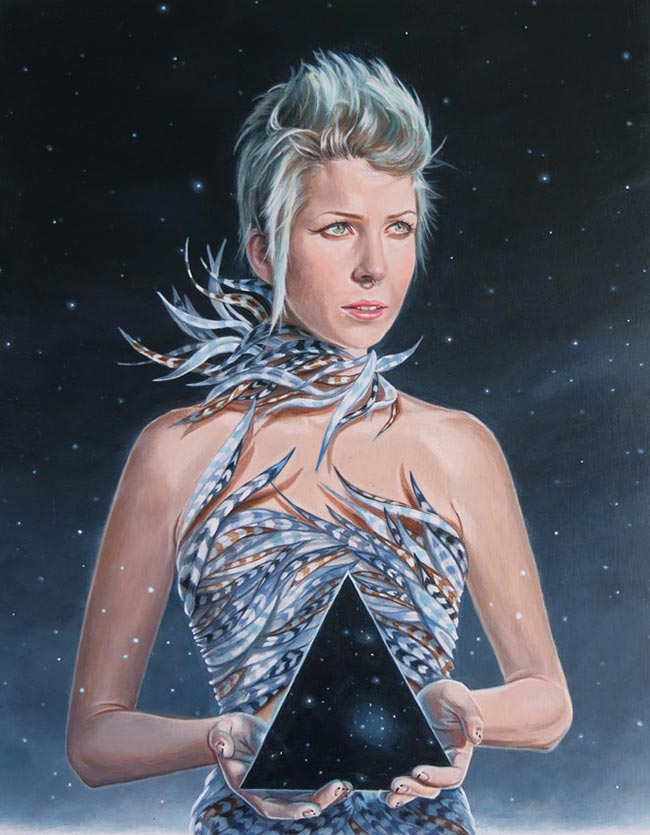 You have recently completed a series of floating head paintings entitled, ‘Les Flottantes’, can you tell us about the series and your inspiration behind it?

This series of paintings is extremely intimate and contains very personal works. I prefer to not reveal everything about my work, so the viewer can see what he or she wants to see. We usually see some kind of reflection in a painting. We search for something that we can relate to and that’s what I like. For someone who has no idea of what I was going through or what I wanted to express with these paintings, they can create their own interpretation of those mysterious floating heads with poppy pods. They don’t necessarily need to know that the paintings are about anxiety, depression and medication. 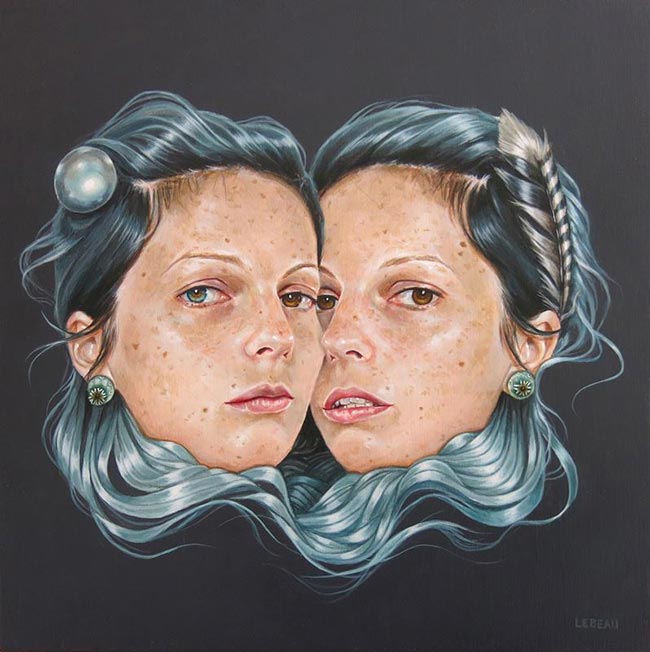 There are many recurring symbols within your paintings, including feathers, floating orbs/droplets and arrows, to name a few. Would you be willing to share any of the personal significance behind any of these and do they carry the same meaning from piece to piece?

I do have some recurring symbols in my work. Most of the time their meaning’s change from painting to painting or have evolved over time. The best example is my feathers. They were mostly just a fauna element at first, but have evolved into something more personal. Recently I’ve been working on another personal series about social anxiety, isolation and the cocoon that I created as a protection. In this body of works the cocoon is represented by those feathers. 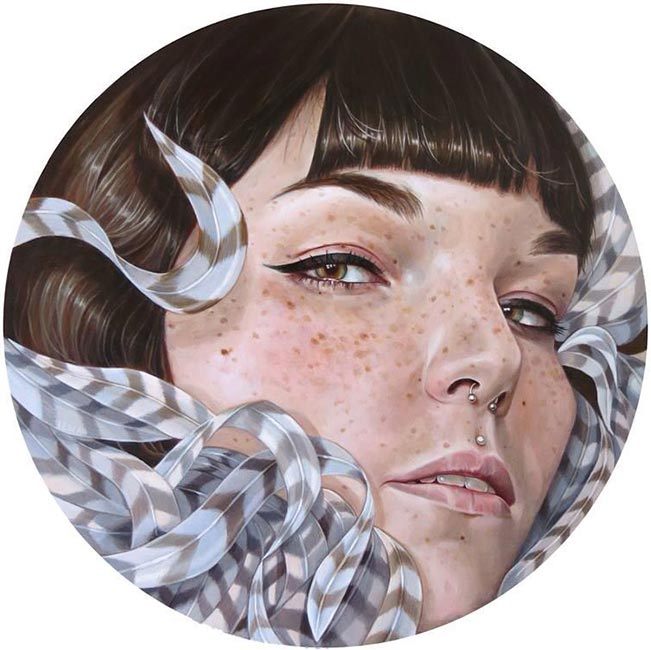 You have stated that mythology and fairy tales provide you with ideas and inspiration. Do you have any favourite myths/tales that you’d like to share with us?

My favourite myths are about the Hamadryads from Greek Mythology. The Hamadryads are a kind of nymph. They are connected to a tree and if the tree dies they disappear with it. One cannot survive without the other. I just really like the idea of being connected to nature like this.

Your artwork has been widely exhibited throughout the New Contemporary gallery scene. How important has this been to your career and what role have other artists within the scene had on your success?

It has been everything. This scene has been so nice to me. Not only the galleries but also the artists. In the New Contemporary scene there are lots of shows curated by artists and it’s also because of them that my work has been present in the U.S. 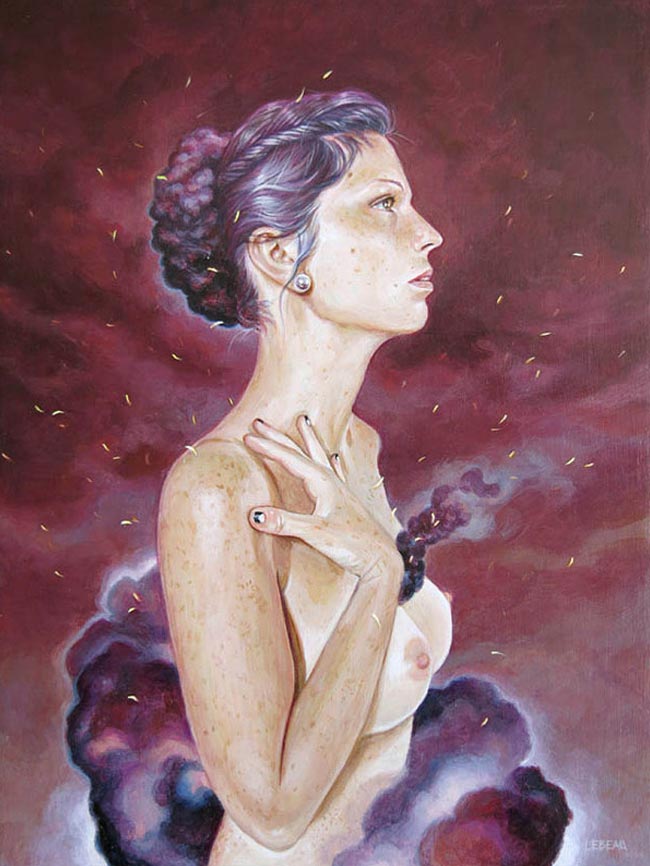 Do you do many commissions? How do you find working on these in comparison to your own personal work?

Yes, I do them from time to time, in between shows when I have an opportunity. It’s sometimes refreshing to work on something else. I like to exchange ideas with the client, collaborate and create something that we will both like. But I still prefer working on personal work though. 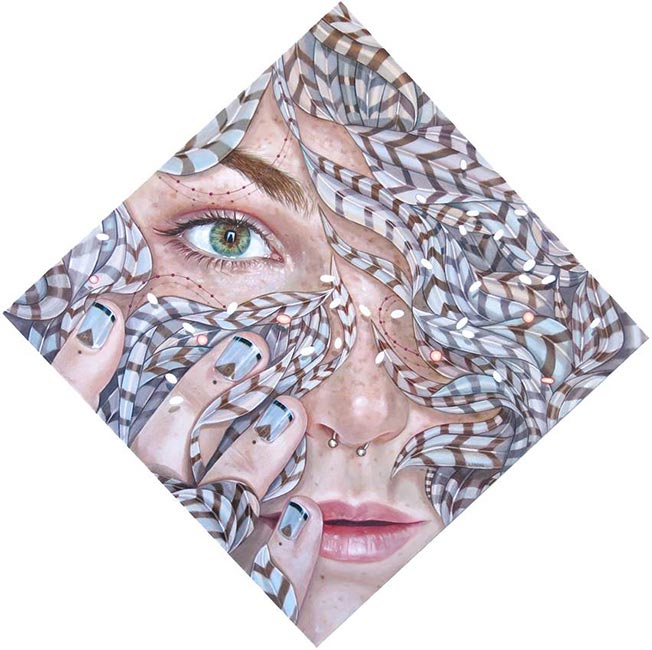 Music is an important ingredient to many artists’ creative environments. How important is music for you and what are your particular favourite artists/albums to work to?

Yes, music is part of my creative environment. A little less at present than it use to be, but it’s still there. I can’t explain why. I do listen to music while I work and I also listen to TV shows and movies. Stuff I have already watched and liked, or the new shows available on Netflix that don’t need all of my concentration. Sometimes I just need a background noise. Lately, it’s mostly when I work at night that I’ll listen to music. Recently I’ve been listening to a lot of Beirut, Cœur de pirate’s soundtrack for Trauma, Jack White’s new album, Lana Del Rey, and Sia’s new album, among others. I also like to listen to movie soundtracks like the ones from the Dark Knight movies. 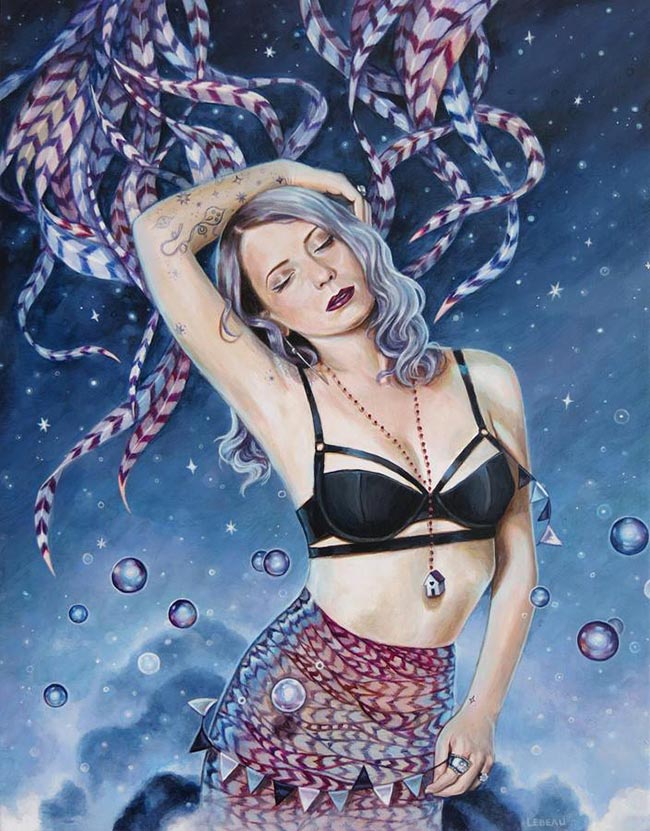 What do you do to relax when you’re not painting?

What’s next for Edith Lebeau?

I don’t know, and that’s OK! I’m working on a series of personal works for no show in particular, just for myself. These will be big pieces and I’m pretty excited to start working on big pieces again. I will also continue to explore the cocoon theme that I’ve been working on recently. 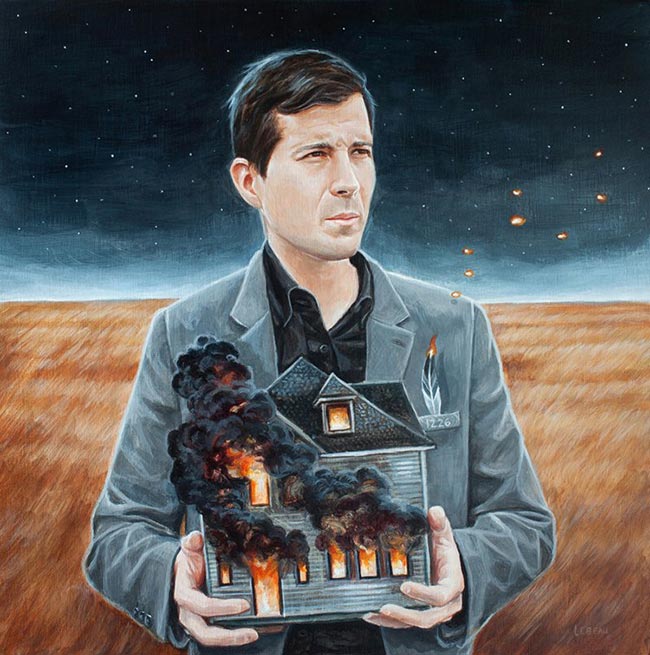 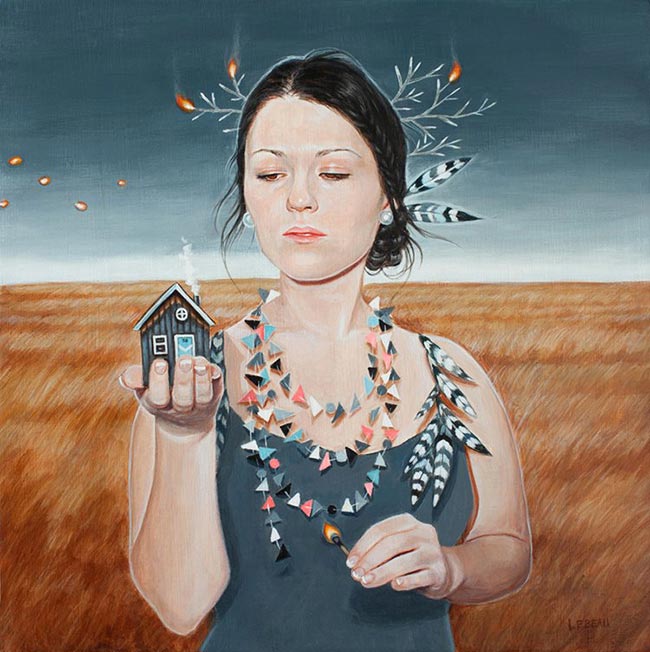 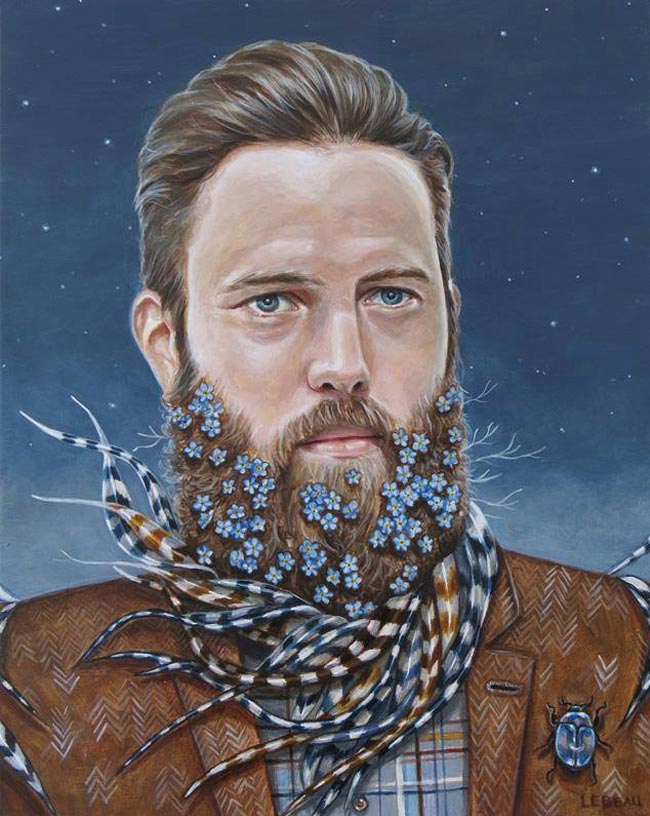 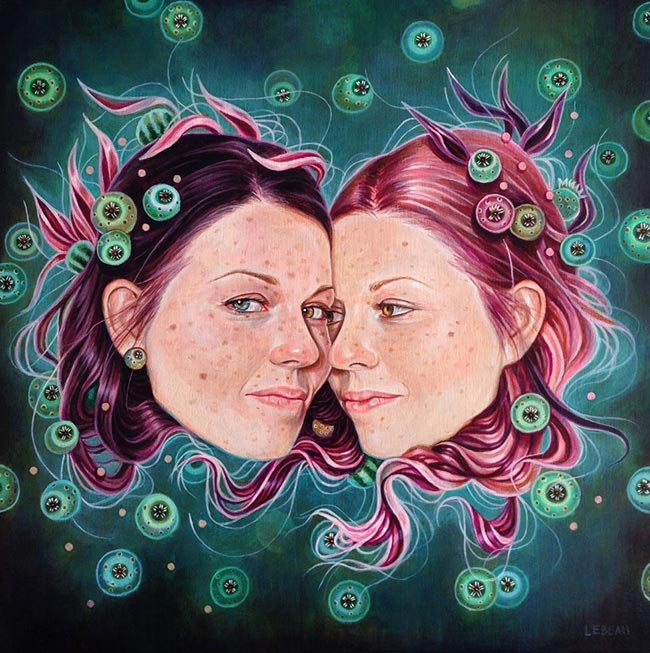 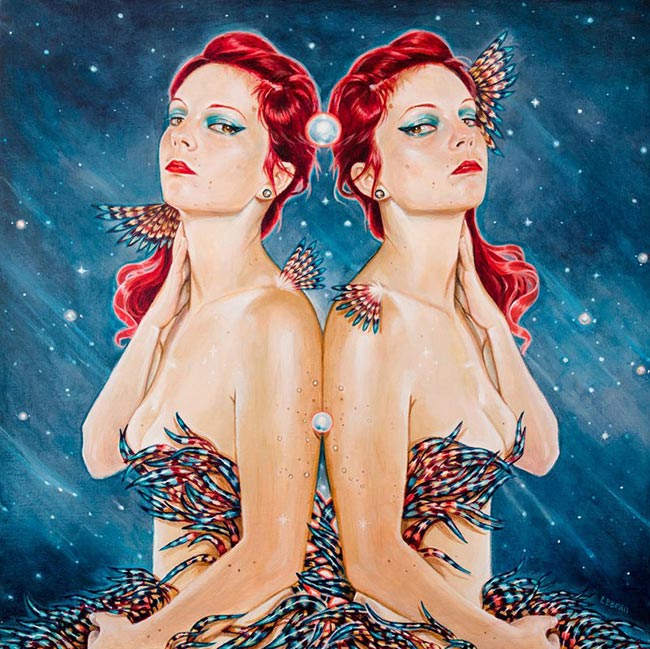 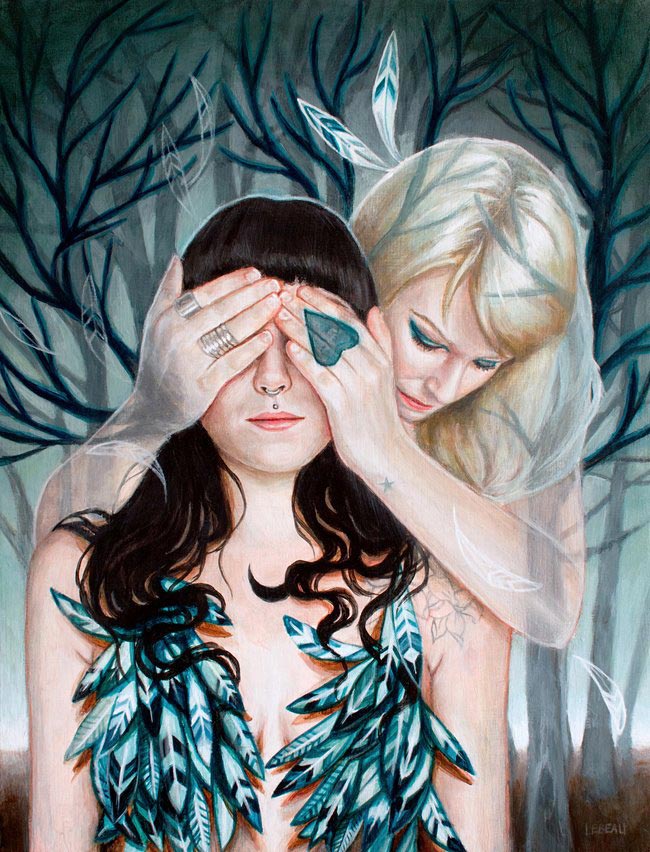