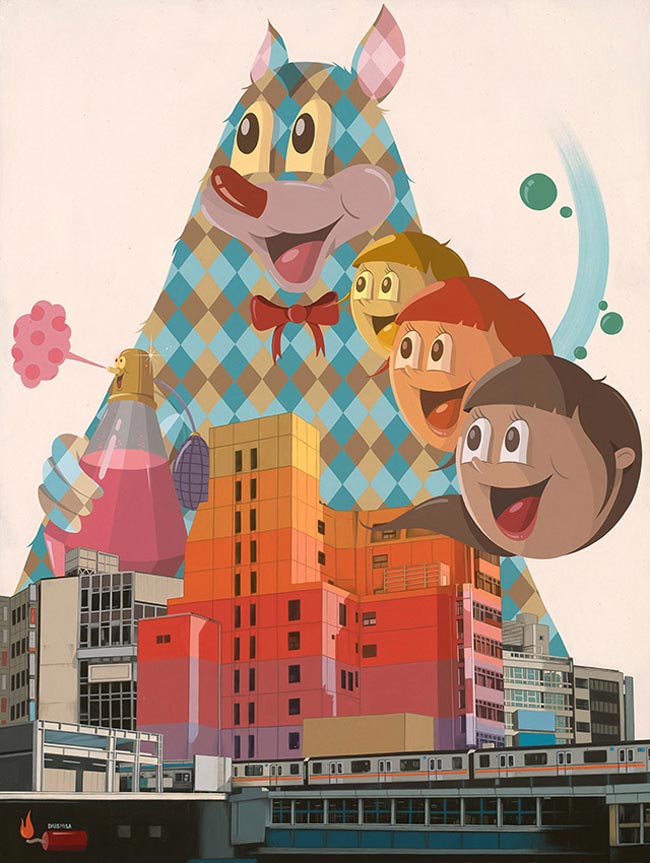 For Dabs and Myla, life is never dull. On any given day, you might find them traveling to some far-flung corner of the world to paint a mural, creating artwork for a film set, or building an installation that transfigures a gallery’s conventional white walls into an three-dimensional wonderland. Most often, you will find them in their studio, heads bowed over a pair of paintings that they pass back and forth to each other across their shared work table, in a perpetual collaborative exchange punctuated by playful banter, music selections and tasty treats. But the one constant that you can always rely on is that you will find them side by side. Since they moved to Los Angeles from Australia in 2009, Myla and Dabs have never been apart for more than a few hours.

Despite their harmonious dynamic, chaos is a constant in their lives. One day, they might be at home madly grinding away to meet an illustration deadline, and the next morning be jetting off to Mexico City to paint a mural through the night, only to return to Los Angeles the following day—fueled on sugar, caffeine and the few moments of sleep they could catch in transit—to greet throngs of fans lined up outside a gallery exhibition of their paintings. They have been invited to paint murals in places as various as Rio de Janeiro, London, Detroit, Norway and Tahiti, and it’s a rare month that doesn’t find them in an airplane on a rendezvous with a box of spraypaint. Accomplished illustrators, Dabs Myla have been invited to lend their unique aesthetic to many large apparel and housewares brands, including Adidas and Sanrio. Recently, they were commissioned to bring their vision to life on a massive scale by designing the set, logo and award statuette for the 2015 MTV Movie Awards.

If you were to ask Dabs or Myla to reveal the secret of their success, they might say they live by the old adage, “The harder I work, the luckier I get.” Their art is inspired by their life as a married couple, their travel around the world, and the beautiful pandemonium of everyday experience. Few relationships could bear the pressure of such intensity and proximity, but Dabs and Myla have developed a collaborative rapport that elevates their individual contributions into something greater than the sum of its parts. Myla thrives in the realm of precision, painting photorealistic representations of the cityscapes they encounter while traveling, and laying out playful patterns with mathematical exactitude. Dabs brings life to their buoyant, rambunctious characters, inspired by graffiti, mid-century illustration and theatrical cartoons from the Golden Age of animation. As Dabs Myla have grown together as a creative team, their individual aesthetics have converged to complement each other. Stimulating each other’s creative growth provides the driving force of their partnership, and since they joined forces, their aesthetic has evolved constantly. What they’re doing is much more than a collaboration of art—it’s a collaboration of two people’s lives, full of love and play and the genesis of fantastic things.

“We never stop painting in some form. Pretty much all day of every day we are painting something. When we start feeling tired of being inside painting we paint a wall outside which is usually pretty exhausting so we are happy to be back inside working on paintings again!!…Its a nice balance and keeps things fresh!” – Dabs (dirtyface)

“When we first start working on a painting we talk for a while about what we would like the piece to look like and then we find the reference that we will use and usually we work everything around the buildings. It takes a while for us to work out the painting and we always work on two paintings at the same time…so this process of drawing takes a few days. Then we both start on one of the paintings and once each of us are pretty much done we switch the paintings over and start working on that piece….we keep passing the paintings back and forth until we are finished. It seems really complicated but it’s pretty straightforward!” – Myla (dirtyface) 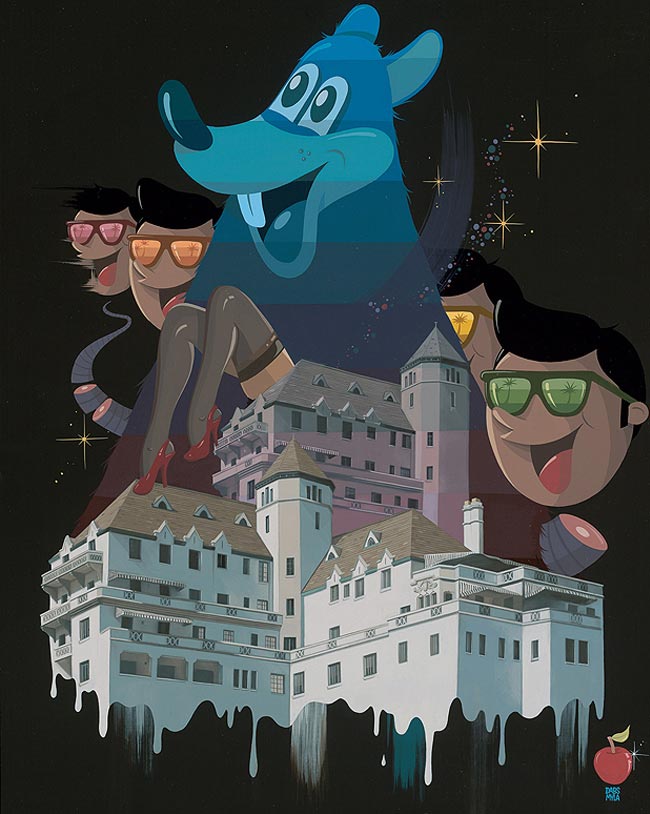 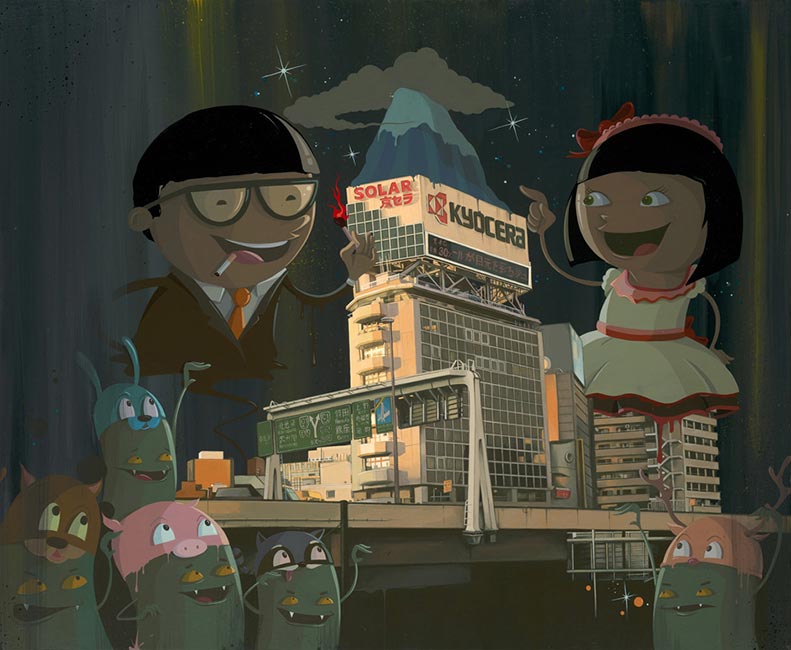 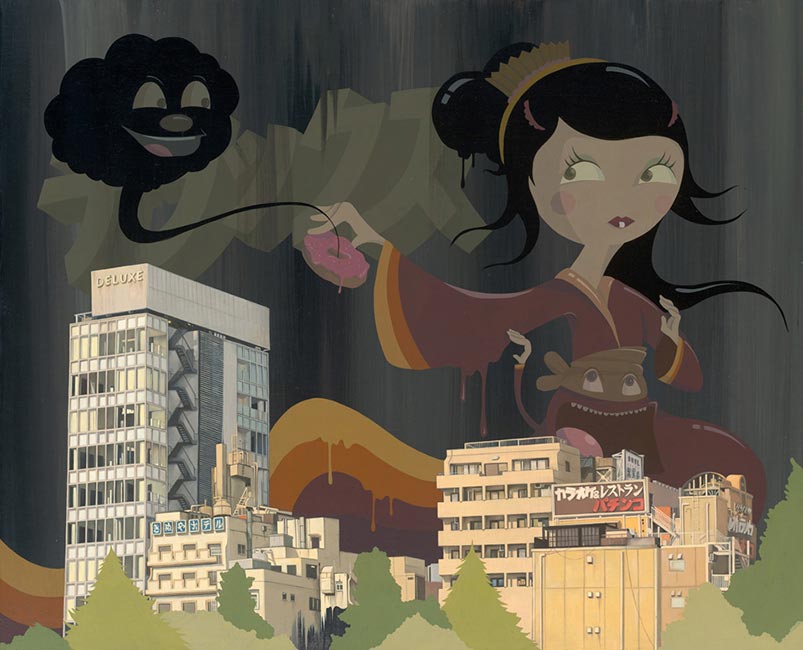 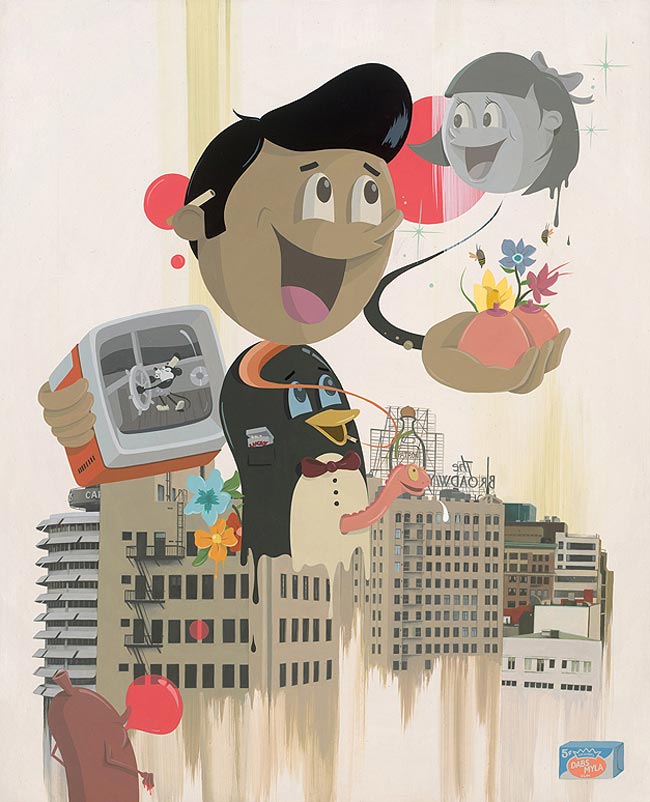 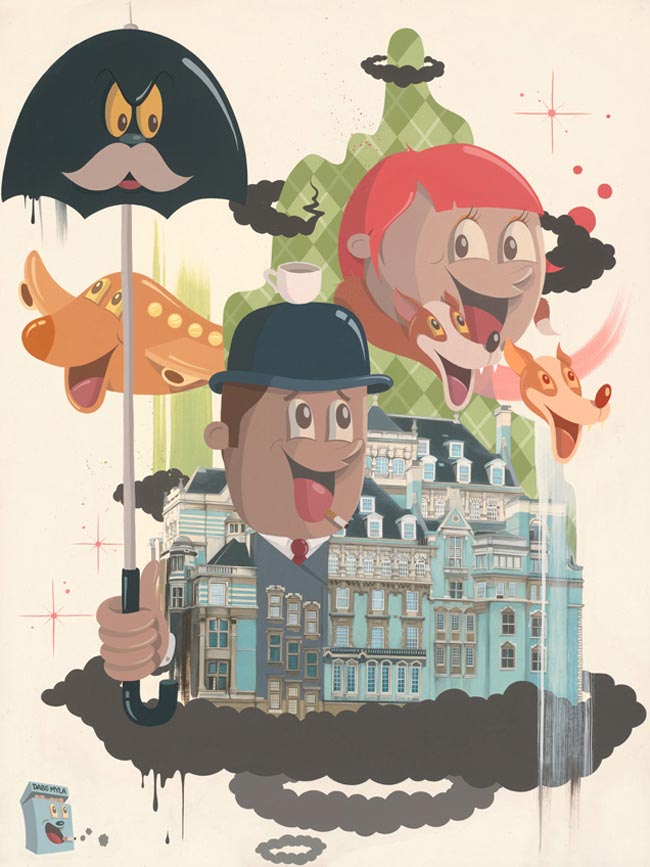 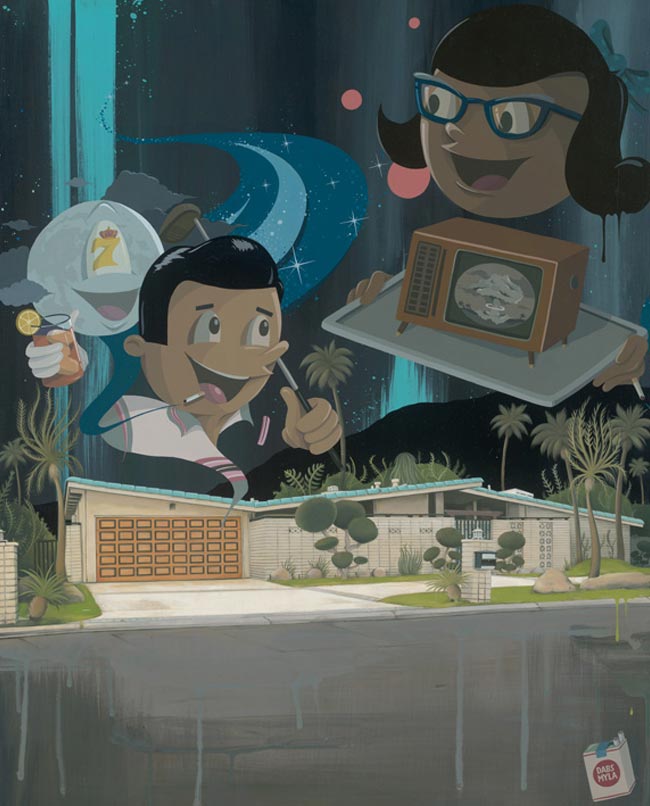 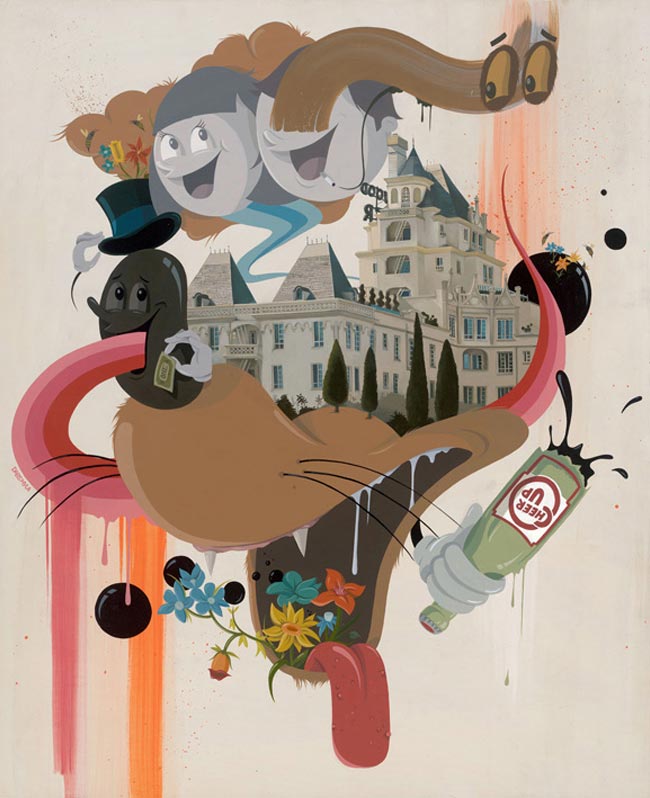 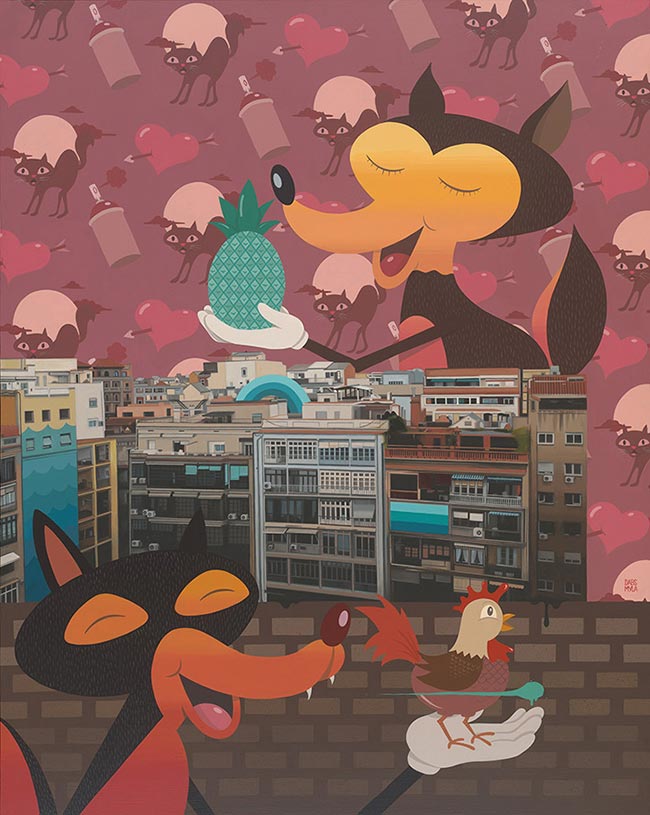 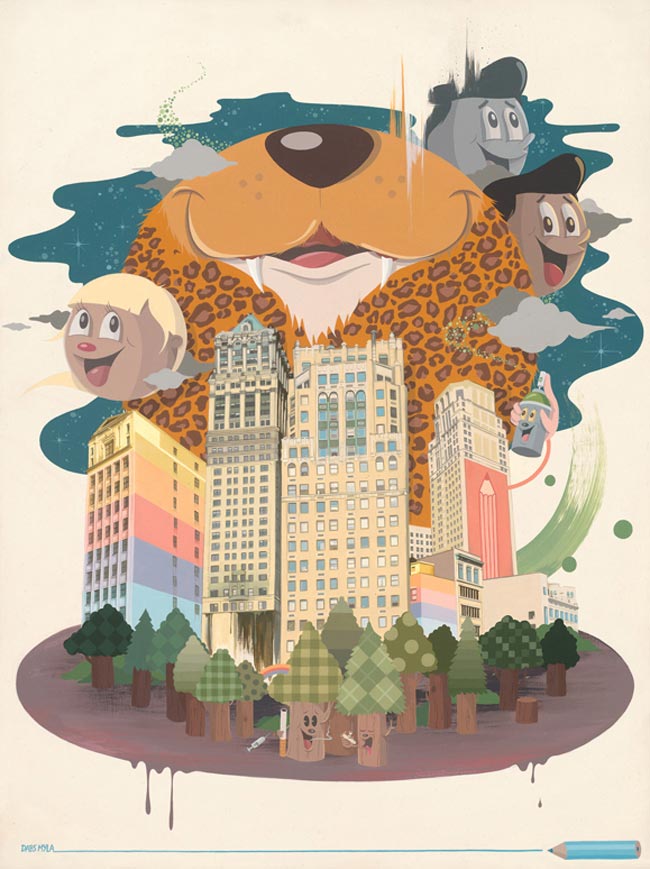 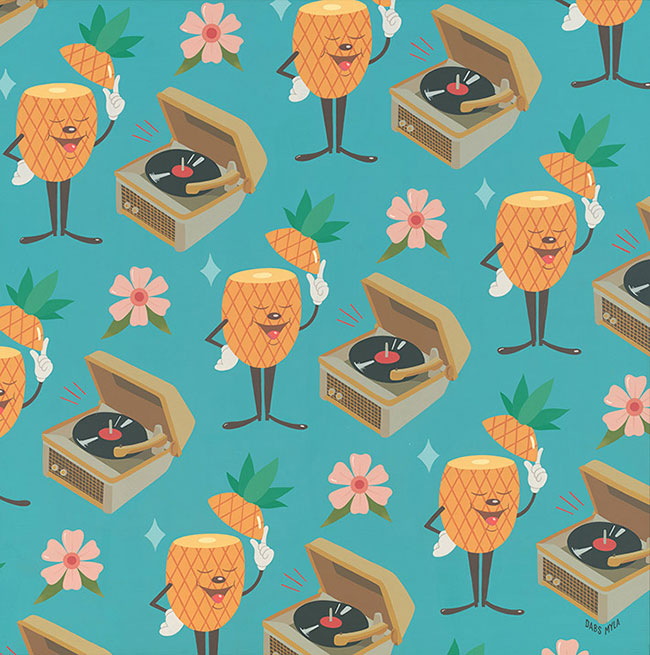 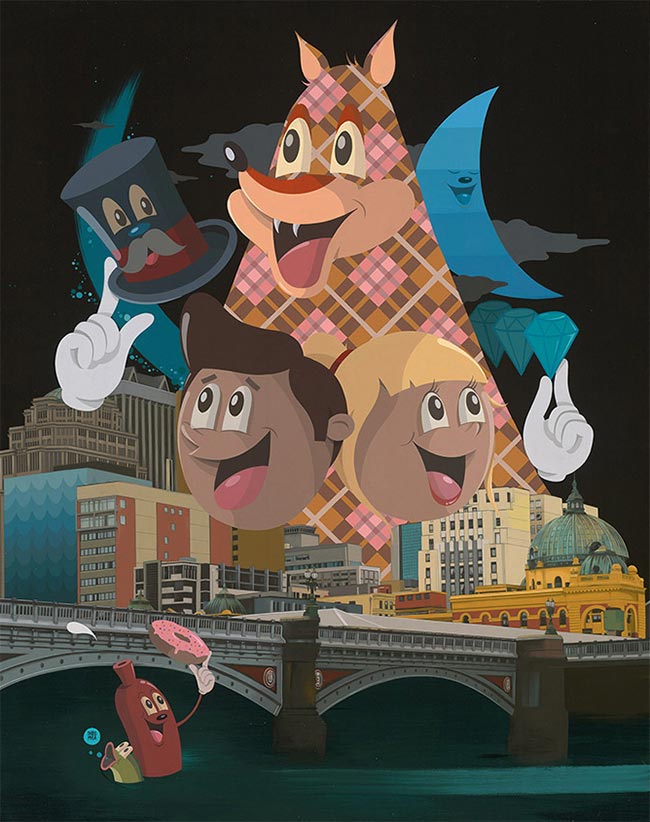 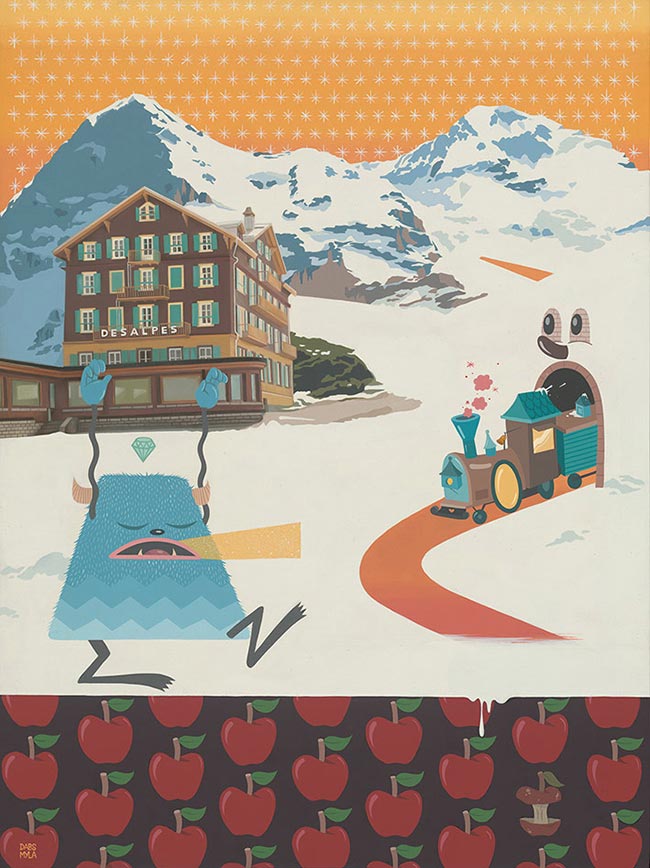 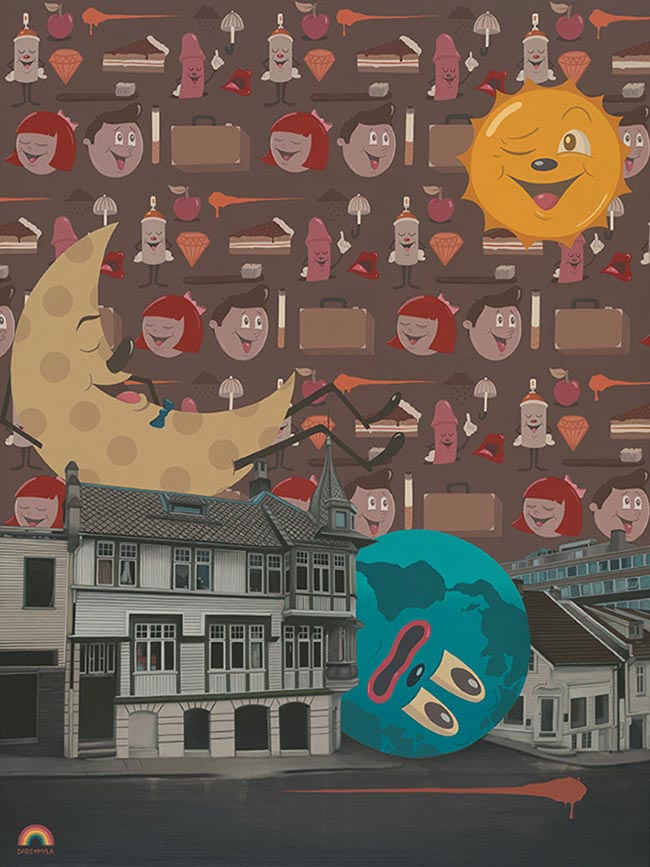 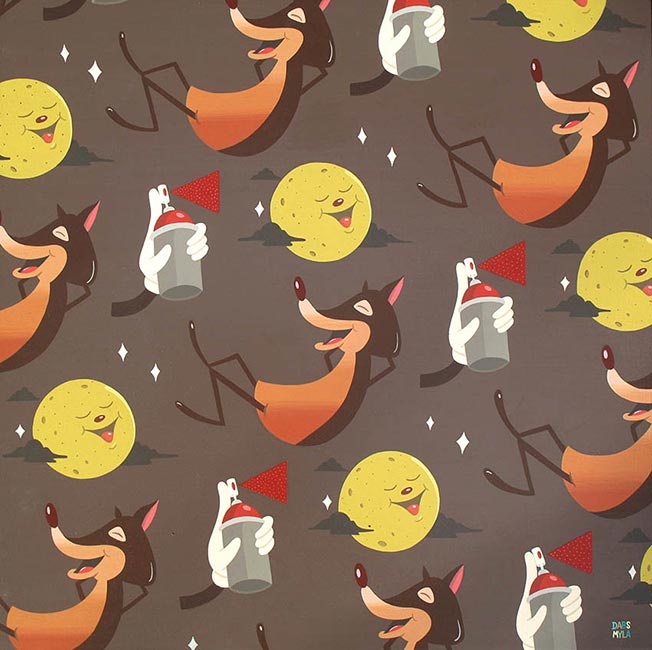 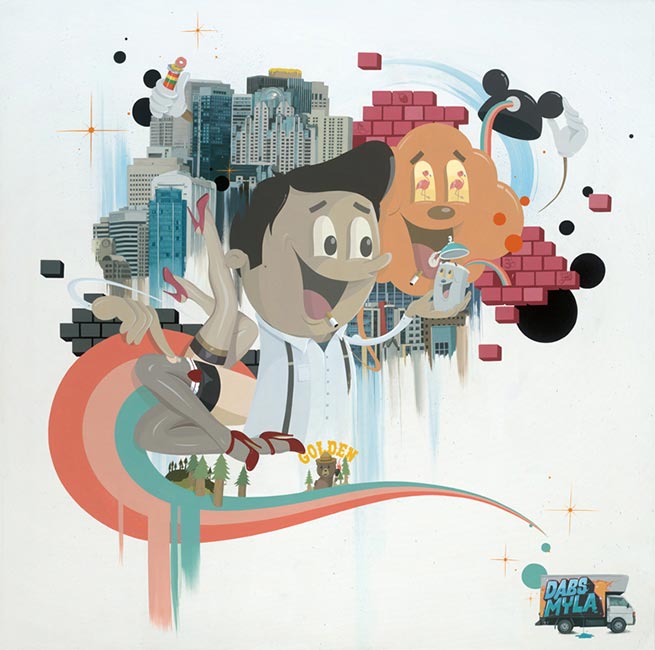 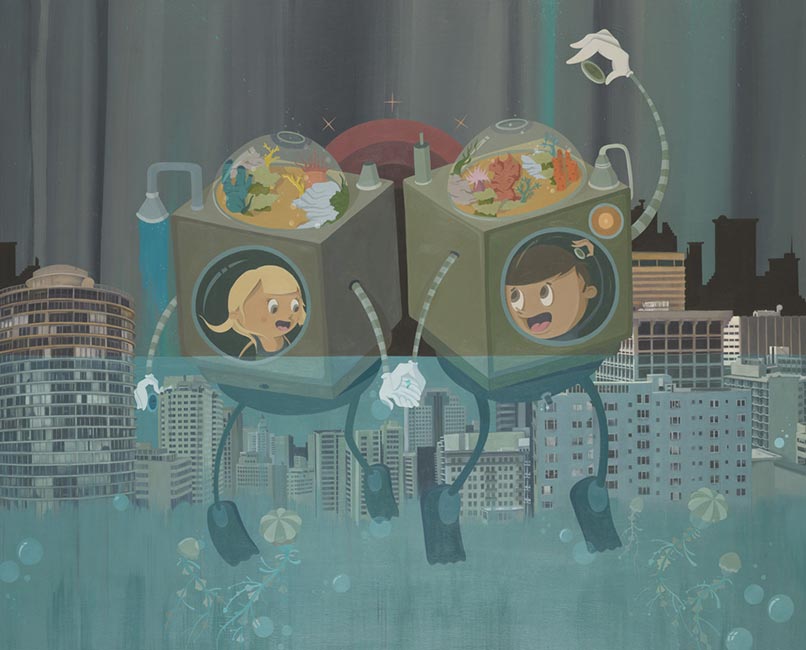