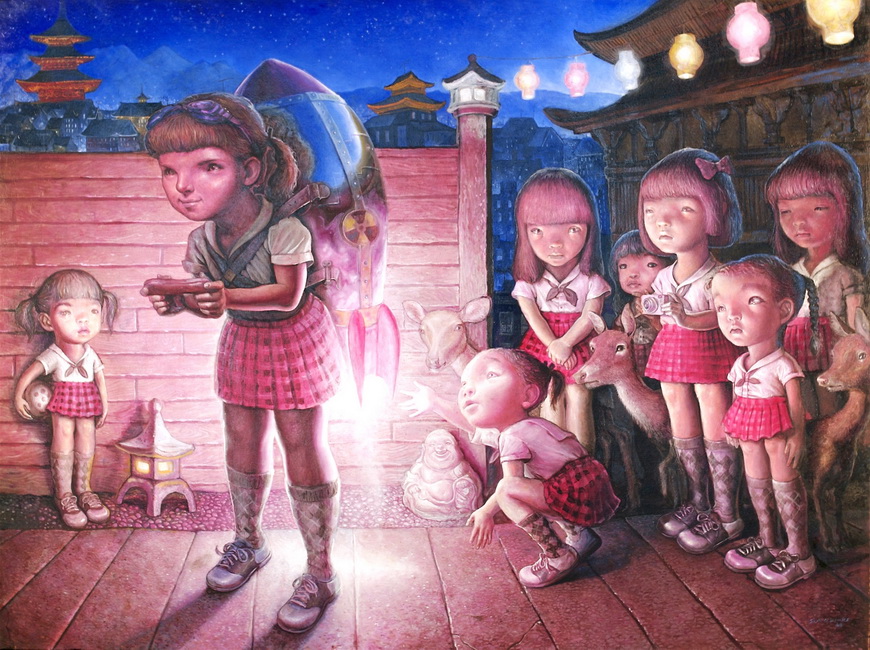 Scott G. Brooks is an American artist, currently residing in the country’s capital city, Washington D.C. He paints images which provide us with a glimpse into the darker core of our human existence. No subject is off limits or too challenging for Brooks, and his canvases are brimming full of stories which take their cues from our murky social, psychological and political lives, all filtered through his offbeat sense of humour. The psyche and appearance of the characters in Scott’s tales are exposed to the viewer to reveal everything from their dominance through to their vulnerabilities, as a means of allowing us to reflect on human nature in contemporary times.

Scott’s unique vision and masterly use of paint have earned him an international following and has seen him exhibit his work in prestigious galleries around the world.

WOW x WOW caught up with Scott as he prepares for his next solo show, to discuss his artistic thoughts, process and working life. 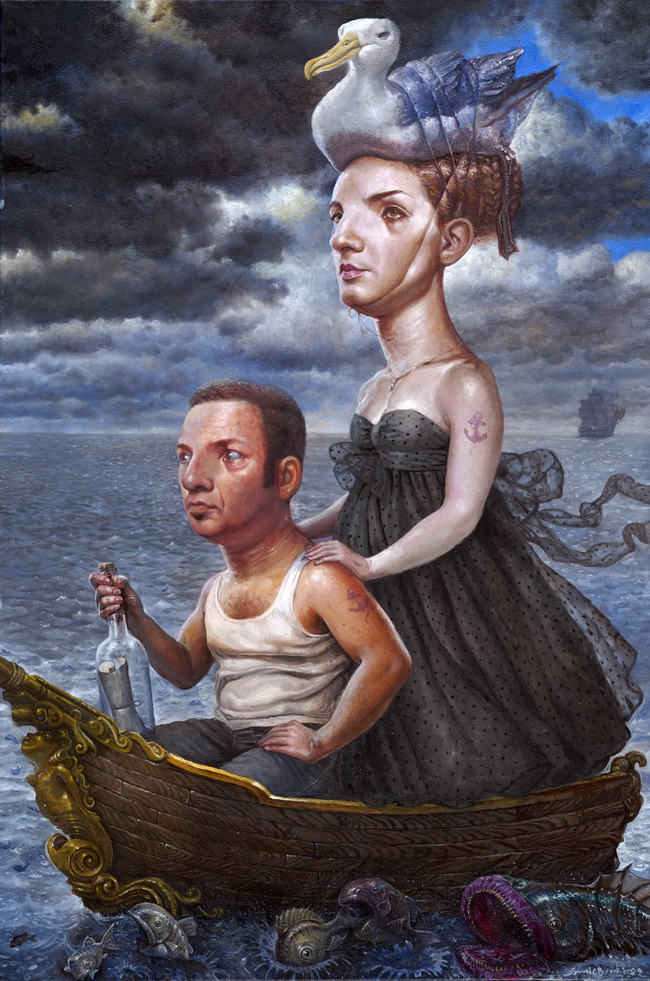 Hey Scott, thanks for joining us. First off, can you tell us a little about where you live?

I live in the Shaw neighborhood of Washington DC, a neighborhood that’s come back in the last couple years after being devastated by the riots in 1968. Howard university is directly behind me. I’ve been in the neighborhood since 2001, and moved into my condo in 2010. Currently there are new buildings sprouting up all around me, as well as restaurants, nightclubs, taverns. It’s really a great place to live. I live work on the 7th floor of an 8 story condo, with a great view of downtown and the Washington Monument.

What is your professional background?

I have a Bachelors in Fine Arts from the University of Michigan. I had a dual major in both painting and graphic design.

Give us an idea of what your studio looks like?

I work in my condo, which is an open industrial loft style one bedroom and den. It is a unique layout in that it’s one large room, with a floor to ceiling, wall to wall window at one end that leads to a small balcony, and that’s where I work. My work area is about 12 ft x 15 ft, but my work is scattered throughout. Next to my easel is a large TV, which doubles as a computer monitor, so I can surf, watch movies, or listen to music while I paint. There is also an abundance of wall space, with a picture rail, which makes hanging up my work, and the work I’ve collected much easier to move around as needed. There is also a small office further back with the computers, printers, and file cabinets, as well as my Cintiq. This is where I do the commercial work and illustrations. 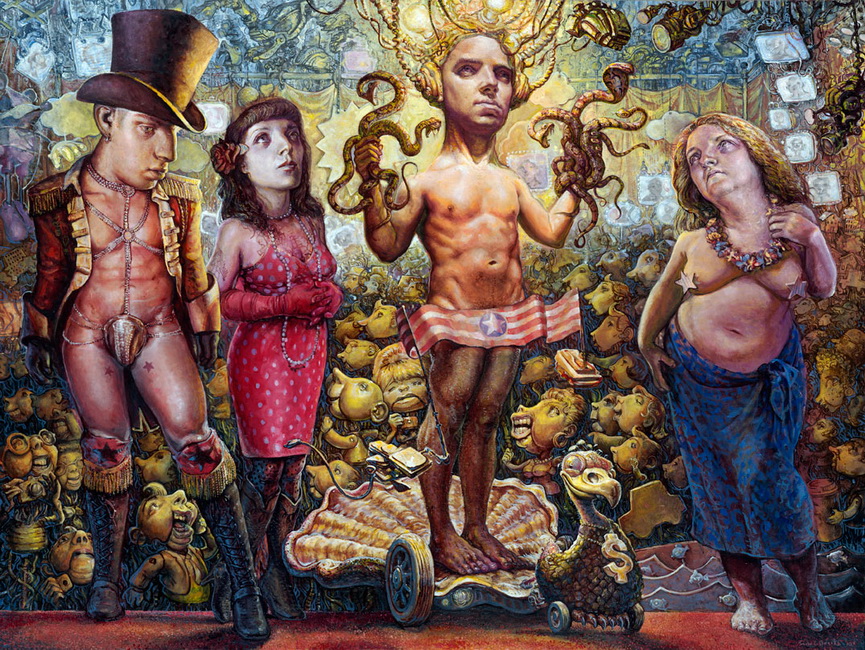 Talk to us about the themes that you like to explore with your work?

All my work is based on the figure in some way. I use models and then create something that will be fun and interesting for me to paint, and for others to enjoy. A narrative develops, sometimes simple, other times more complex. Themes incorporating sexuality, gender, society and politics interest me and often emerge, sometimes intentional from the outset and other times developing as I work.

Your paintings tell stories. In order to achieve this, you skilfully incorporate visual cues and symbols. Please share a little about how you approach this area of your work?

It all depends on the painting. As I create the context for the figures I am constantly re-evaluating what it is saying, or what it needs to get some sense of place or motivation. I grew up reading comic books and watching lots of cartoons, so I think I developed a way to communicate using imagery. The symbolism works both ways and I can sometimes use it to cloud my intentions, since I don’t want to give everything away. People see symbols very differently, and the range of interpretations fascinate me. 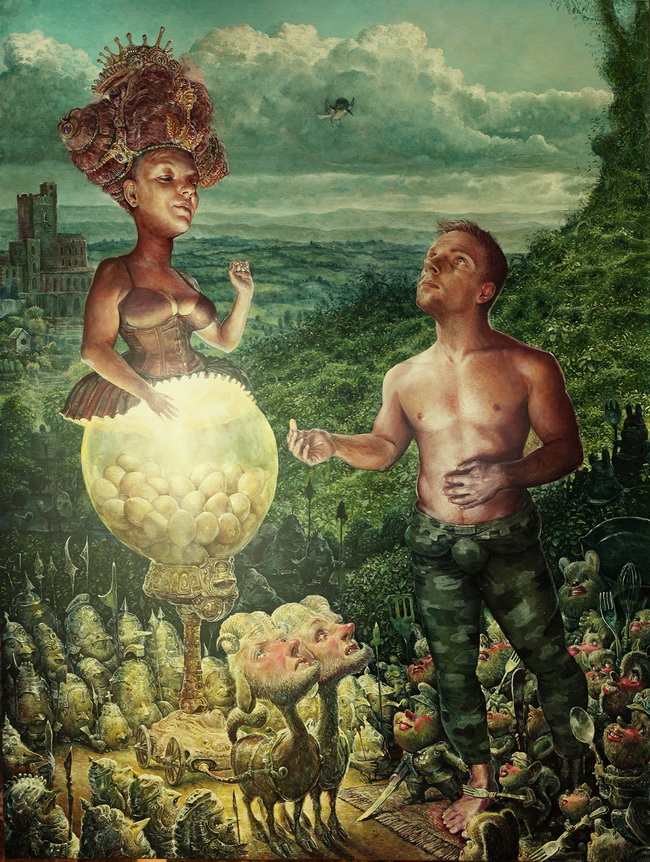 Being a figurative painter, what sort of references do you use?

I hire models, or have friends come over for most of my work. We’ll have a photoshoot that lasts an hour or two, and then I print out the images. I will occasionally use an image I find online if it’s hi-res and unique, but prefer using my own photos. I currently use digital images exclusively, but have a box of old photographs I need to scan in. I can also draw relatively well from memory, and some characters are entirely made up in my head. I love working from life and draw from live models when I can, unfortunately it’s just not possible with the type of work I do.

The figures in your paintings are cleverly stylised. You play around with the proportions of facial features, length of limbs, etc. Have you always painted people this way and what are the main motivations behind the look of your characters?

I began distorting the faces about 15 years ago, and moved on to the torsos a bit later. I’m actually reversing that a bit and the proportions are more representational in my most recent work. The distortions first appeared in my commercial illustration, cartoons etc., and it was a fun way to see the figure so I started using it in my paintings. It happens pretty natural at this point. I think it adds an element of drama and the faces feel more expressive. In the early days it was I used the distortions as a way to create a unique “style”. It seemed different at the time and it stuck. I see similar distortions in many other artists now. It’s been a fairly common convention throughout art history. 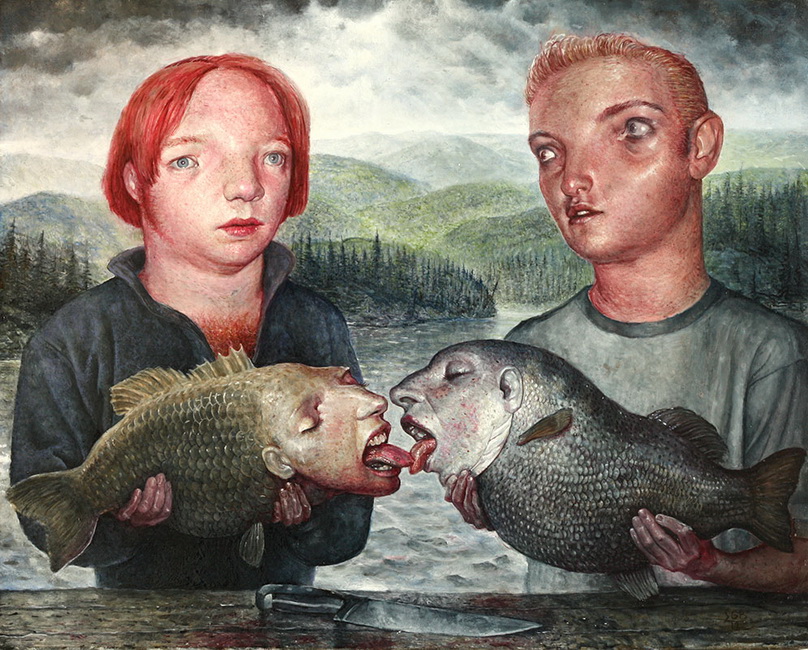 You always paint such colourful characters that exist in their own wonderfully unique world, far away from homogeneity. Where do you find the inspiration for them?

While my models are colorful and exist in their own unique world, that only gets me so far. The characters tend to reveal themselves while I work on a paintings. I’ll work from the models as long as I can, but must keep in mind that these aren’t portraits, that’s tougher than it sounds, especially when I’m using friends as models. I’m inspired by the people around me, the models themselves, friends, families, politicians, celebrities etc.

Is it important to you that the viewer gets your intended meaning or do you feel that their interpretation of your work holds it’s own validity?

The viewers interpretation is incredibly valid, since most often their only real clue is the title. I am very entertained by what people read into my work, since It seems obvious to me. My work is a way for me to deal with events and emotions in my own life,  so I’m often trying to be vague, depending on how much I feel like “sharing”. 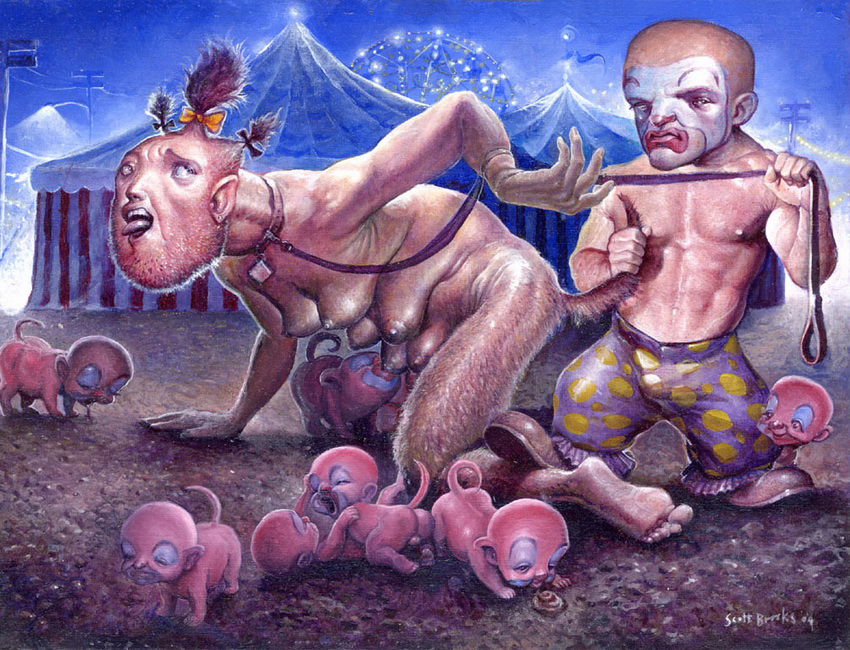 How do you go about naming your paintings and what sort of emphasis do you put on their titles?

Titles are tough, and sometimes I’ll hit on the right one early one, and other times I struggle. I’m not above using puns, or overly lyrical titles, whatever works in a pinch. It’s rare but I have several paintings where the title came first. This relates closely to the previous question, in that the title allows me some control over how viewers see the piece. I can either point them in the right direction with the title, or intentionally throw them off track if I’m feeling mysterious.

As an artist using traditional media what is your opinion on the use of digital/electronic technology in the creation of art. Also, regarding technology, how has the advent of the internet impacted you as an artist?

I use digital technology as much as I can, starting with photoshoots using my digital camera, then Photoshop to edit the photos, and finally printing them out. It’s also really cool that if I need a reference image of an elephant, I can find one using my phone while I paint. I also do quite a bit of commercial art, children’s books, magazine covers, and most recently, videos. All this is done digitally of course. I have a Cintiq, so I can draw right on the monitor using Photoshop, or any painting/photo software, it’s amazing.

The internet has impacted me quite a bit as well. I started doing this before the internet and it opened up a whole new world for me. Connecting with other artists, galleries and collectors became much easier. There’s no reason to be a regional artist anymore – it was all within reach. I created my first website on AOL back in the mid-90’s, and while I try to keep up with trends there aren’t enough hours in the day. 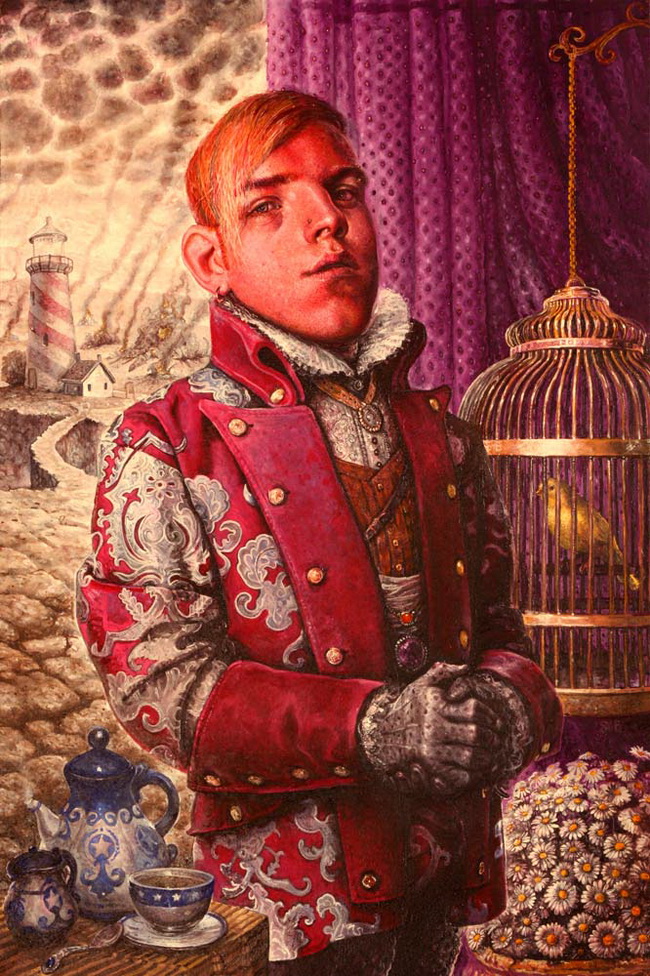 No question that painting is still valid. I think we’re swinging away from photography and conceptual art back toward painting and hand crafted objects in general. Mostly because of the abundance of photos and the fact that everyone has a camera today. I think the New Contemporary Art movement is still in it’s early stages. The incorporation of pop elements, and focus on realism is here to stay, at least for a while. It has risen up right alongside with computers and digital media, so I think there’s a connection there, perhaps it has something to do with being accessible, and that’s OK. 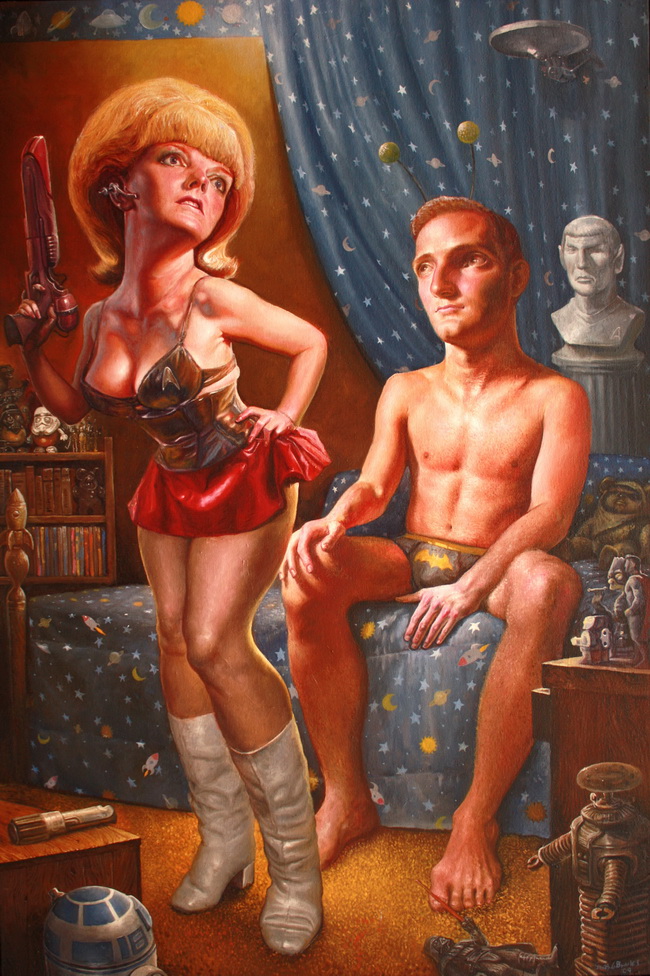 An artist’s existence can be a very solitary one. How do you like to counter balance your time in the studio?

I like the solitude and quiet, and unfortunately my schedule and social obligations make it hard to come by. When I do feel the walls closing in I can turn to social media, but that can quickly become a distraction. I also switch between music, TV, movies, news and anything else I can find to keep me going. I have a very supportive partner and that helps keep me sane-ish. I also have some great friends, many of them creative people that understand what it’s like. In the end I’m much more of an introvert and don’t mind being alone.

What’s next for Scott Brooks?

My show “Inappropriate Nature” opens February 21st at Last Rites Gallery In New York. My work will also exhibited at Mott Community College in Flint Michigan in April. It’s the first time I’ve shown my work in Flint since I left in 1990. I attended Mott for 2 years before transferring to U of M in Ann Arbor. There is also an opportunity to curate a show here in Washington, DC next year. 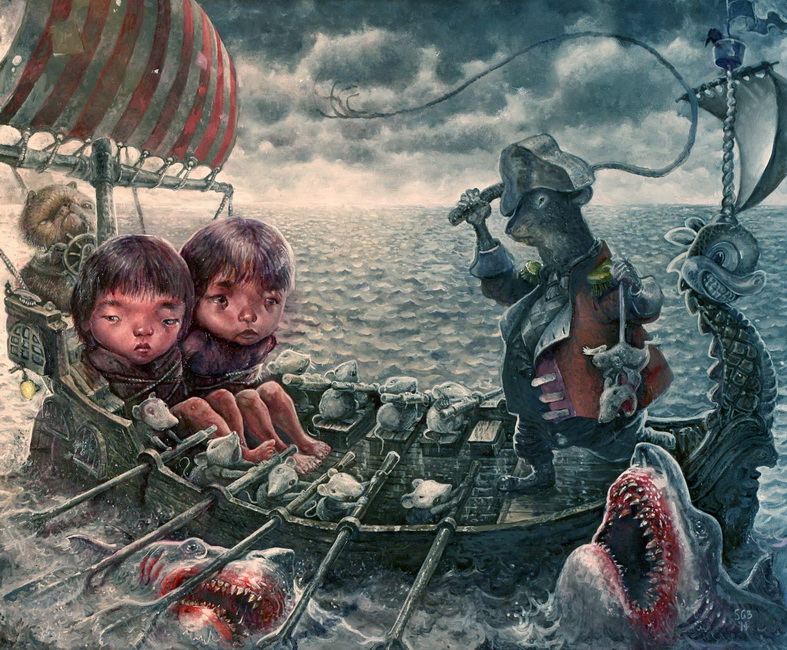 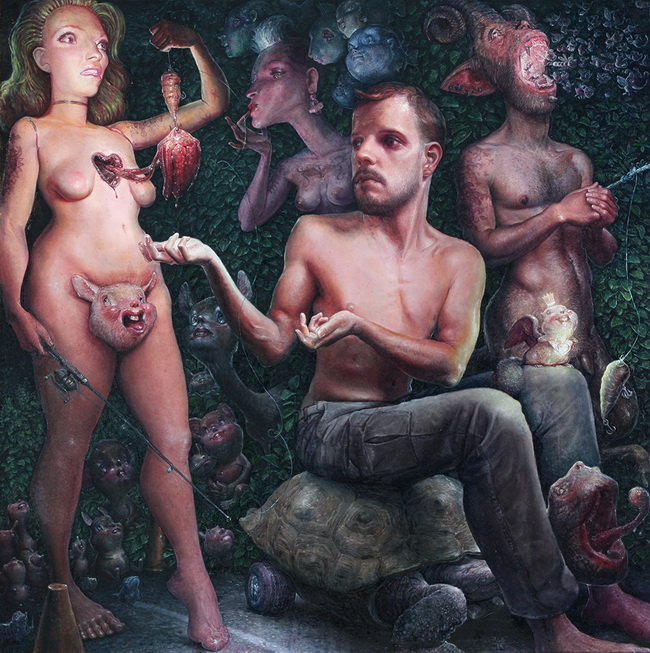 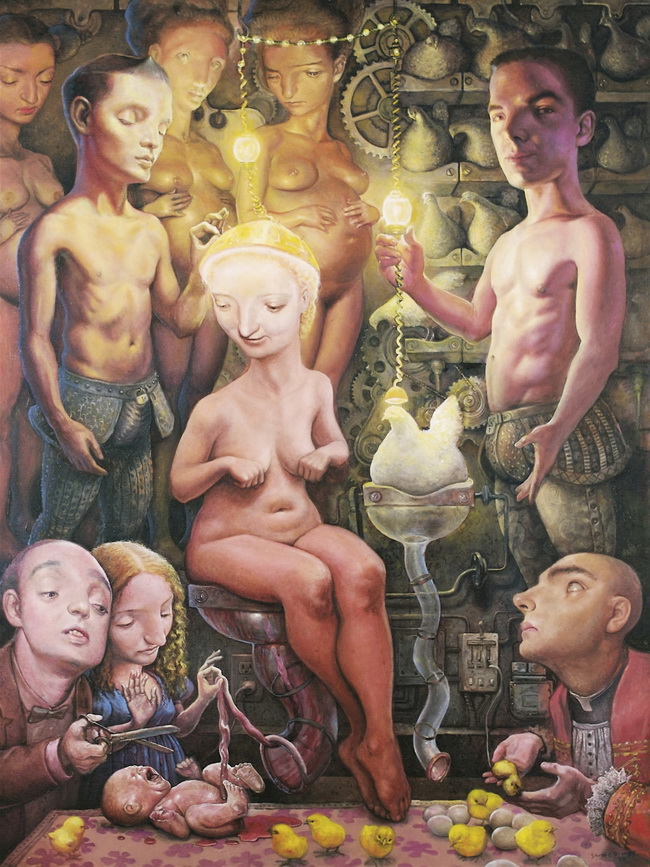 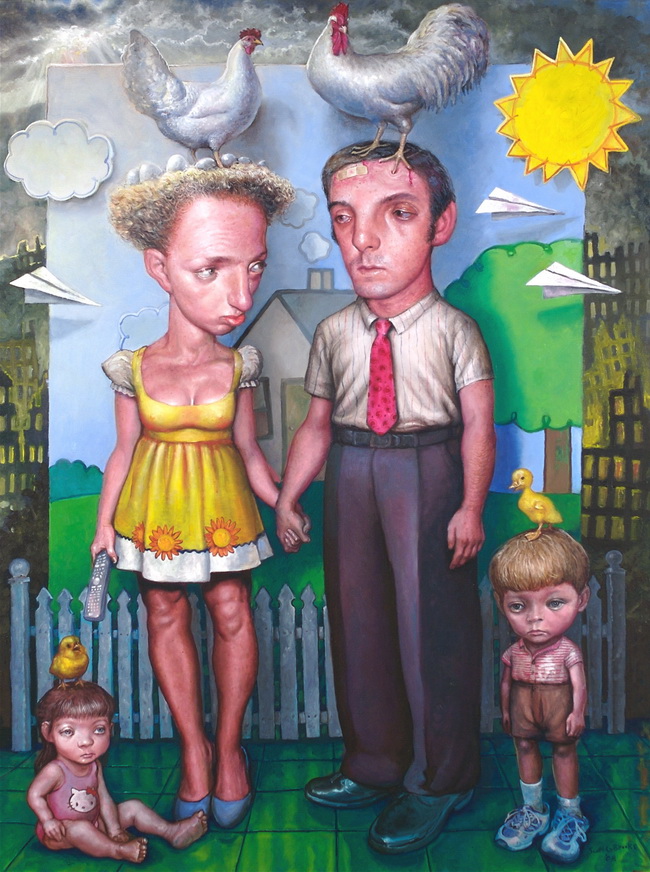 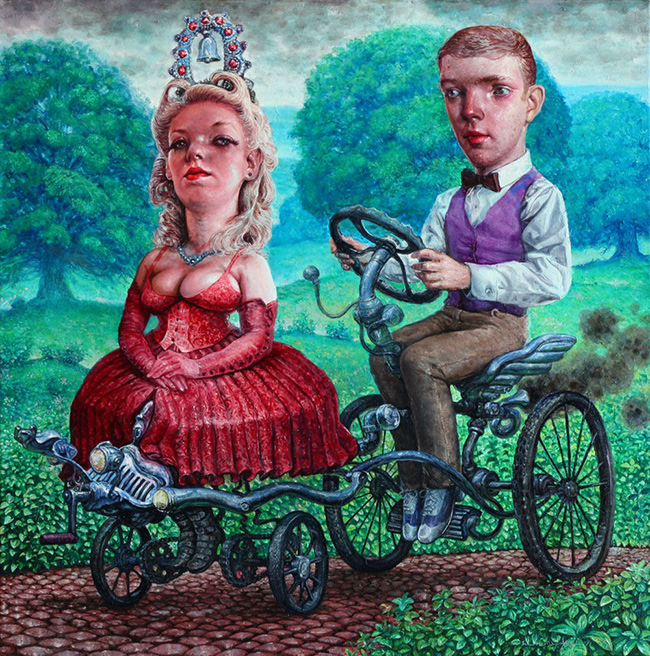 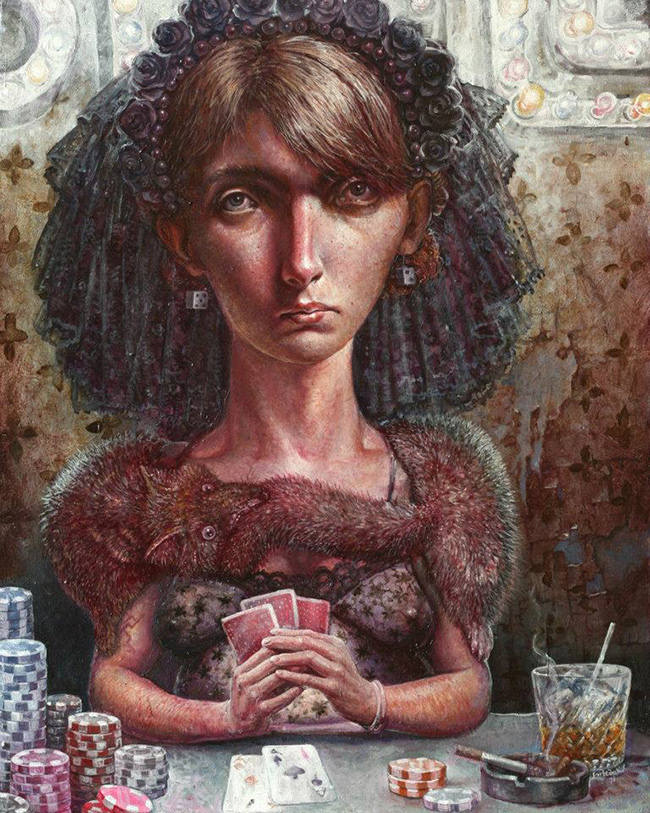 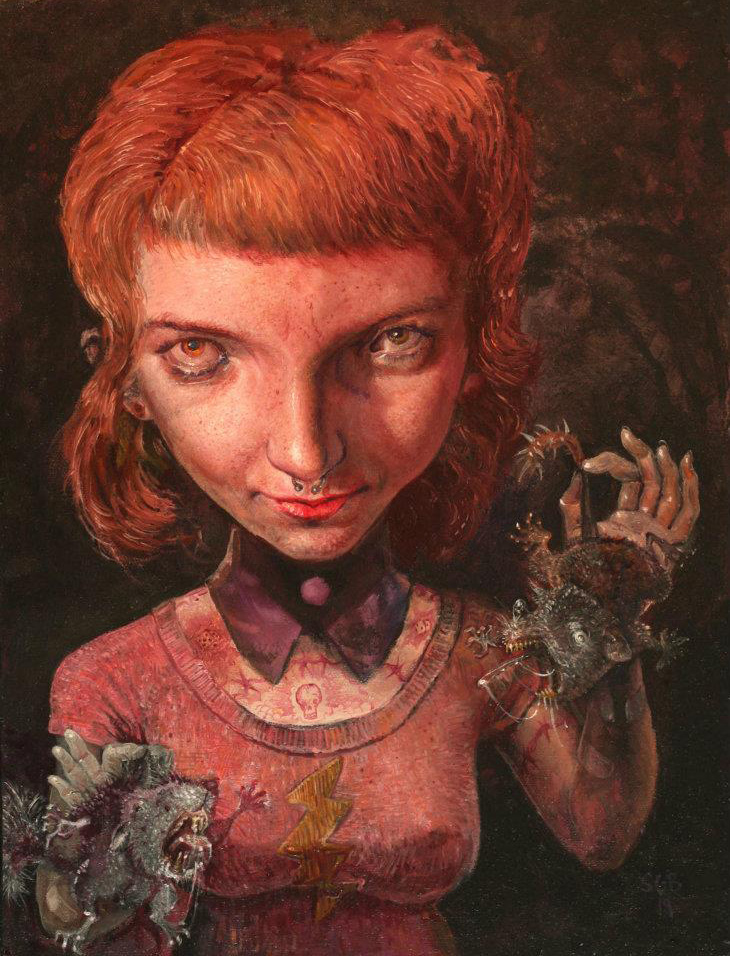 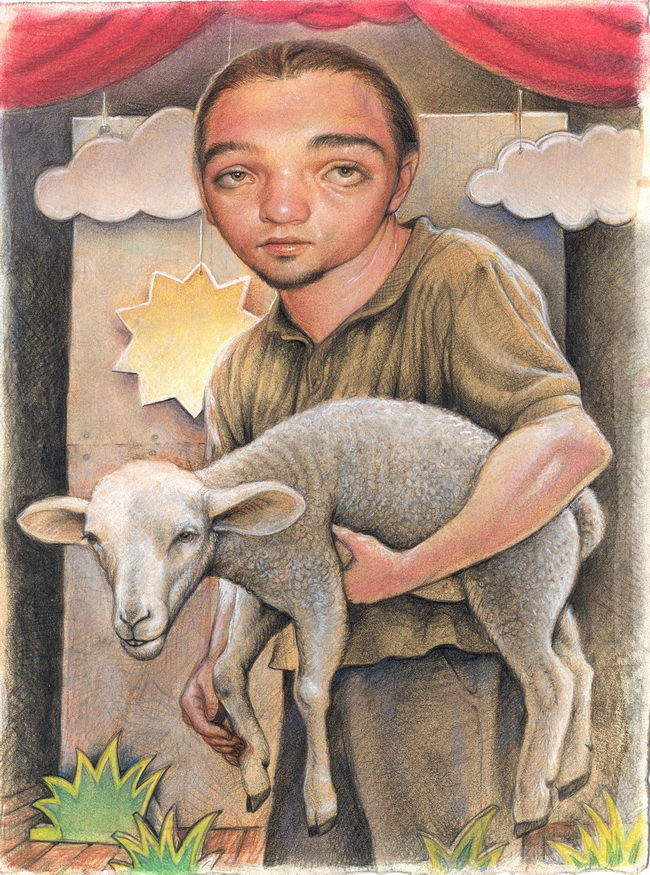 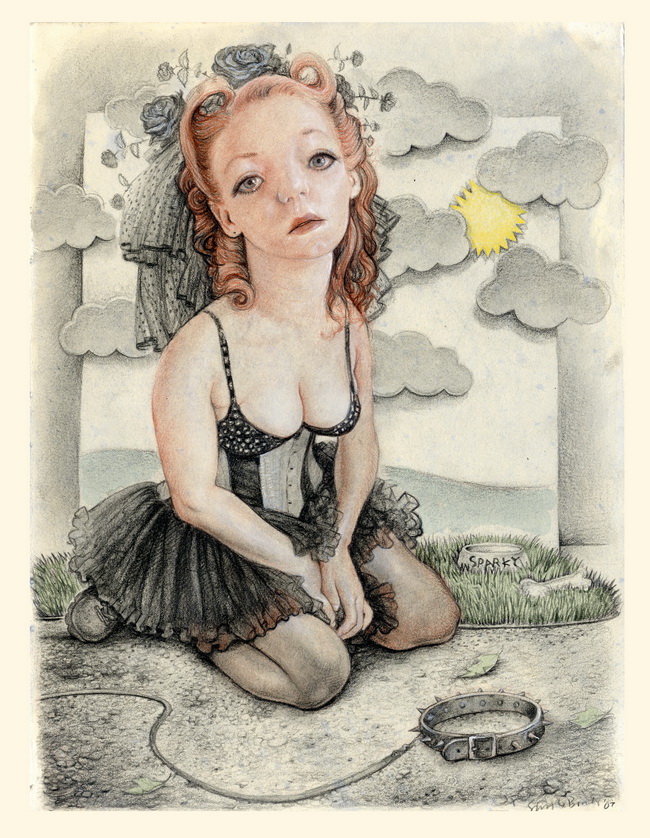