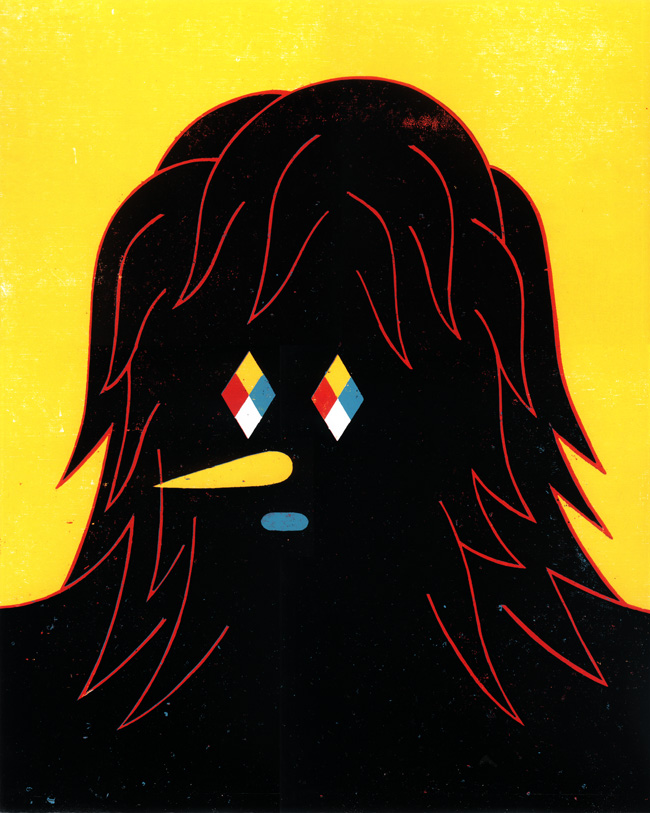 Roman Klonek is a printmaker, and it can be disputed by no-one, that he is a bona fide wizard of the the woodcut. Since he became enchanted with a technique of woodcut printing known as the ‘lost cut’, over fifteen years ago, he has made this his primary method of image making. As a young boy, Roman was hugely drawn to his father’s collection of Polish and Russian Super 8 cartoons, which still provide him with a wealth of inspiration to this day. Throw in healthy measures of folklore from his cultural roots, along with contemporary pop culture influences and Klonek’s creative subconscious conjures up a colourful and eclectic parade of intriguingly whimsical characters, frolicking amidst a geometric wonderland filled with mysterious text and curious situations.

Roman was born in 1969 in Kattowitz, Poland. His family moved to Germany when he was three years old and he has lived there ever since. In the 1990’s he studied Graphic Arts in Düsseldorf, where his passion for woodcut printing began. His work is exhibited and collected around the world.

WOW x WOW are elated to have had the opportunity to catch up with Roman for a rare Q & A. Find out what he had to say in the following interview. 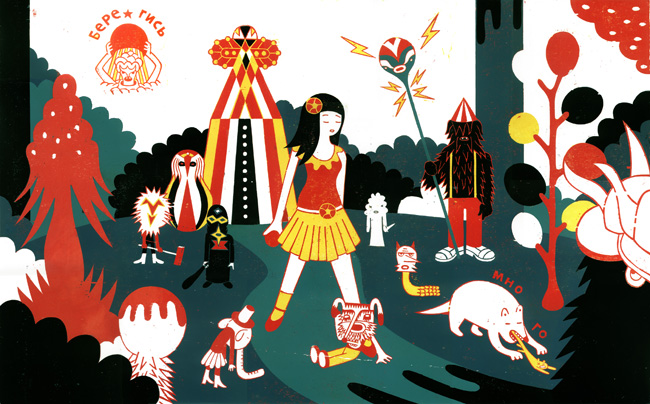 Hi Roman, thanks for joining us! Tell us a little bit about yourself and where you stay?

Hi, I can’t deny, I have a penchant for woodcut printing. I live it out here in my little studio in Düsseldorf in Gemany. It provides fun and satisfaction in many ways. 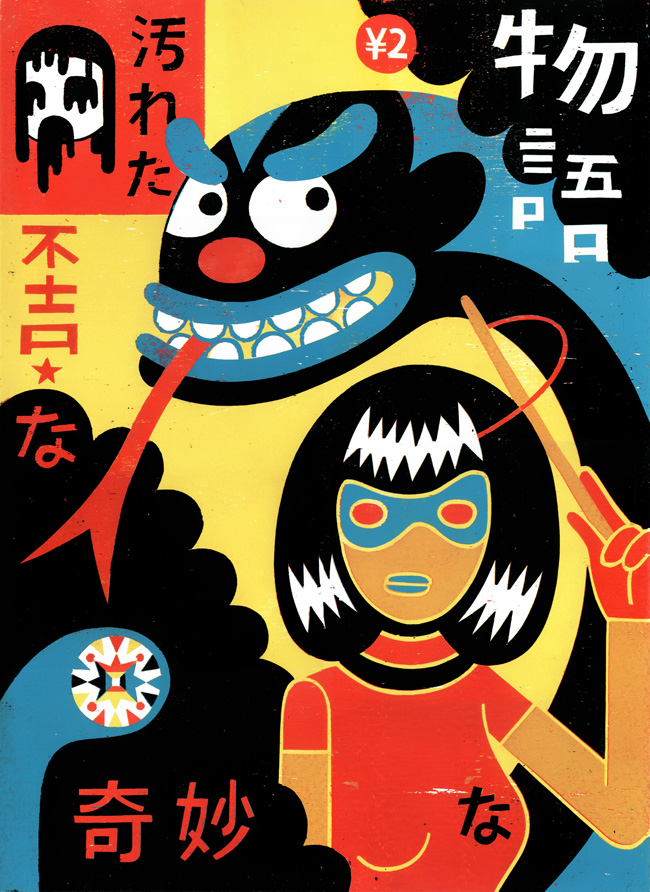 What kind of training have you had and in what ways have you found it beneficial to your career?

The most important thing is my sketch book. And yes, it is a kind of training to scribble in it every day. Nothing special, rather disconnected thoughts. Criss-crossed and in layers and in an unintentional arrangement. More than 90% of it is trash, but it’s absolutely necessary to have this reference. It’s just fun to plough through these completely over scribbled sites. Looking for the hidden little ideas, those special ones, that have what it takes. Actually, that many strokes provide an easy hand. It’s not to be underestimated – it’s (also) a question of mass.

You work as an illustrator as well as create personal fine art for gallery shows. How easy do you find it to balance the two?

I think it’s a good combination. The illustration jobs are very important for a living. And sometimes, after the development of ideas, some of them, especially the ones that are too weird, are left over for a woodcut. 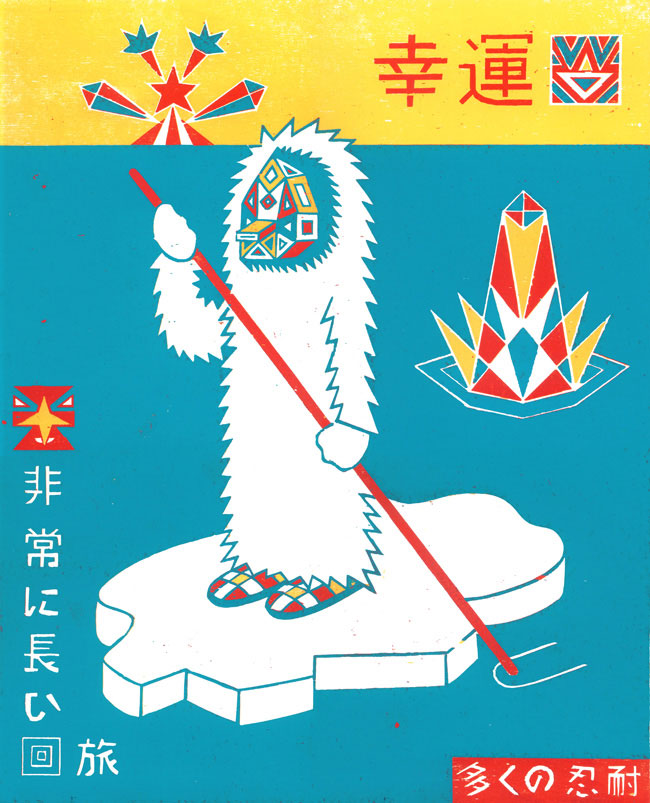 Can you talk to us about some of the main themes you like to explore with your personal work?

It’s quite subjective. The basis is generally a pleasure of storytelling, well it’s an important background for all of my woodcuts. Beyond these essentials, I’ve got several ambitions while scribbling and composing a picture. OK, one is to tell a story, and as every storyteller knows, it has to have a ‘special feature’ in it. At least one, but it’s better to have more. In addition to this, a fine composition and mixture of colors will do the rest. Furthermore, again and again I try to come up with compositions through geometrical construction, as I prefer the variety of compositions this offers. 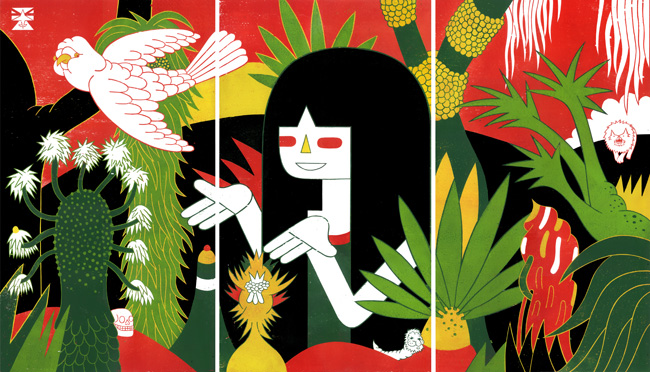 You use a technique of woodcut printing called the ‘lost cut’. Can you give us some insight into the technique and what it was that initially inspired you to start using it?

The ‘lost cut’ – that means that I print all the different colors with only one plate. At first I cut out all the spots that should remain white. Then I make a print in the first color. Now I cut out all the spots that should remain in the first color, and so on. In the end the plate is ‘lost’. A retake is not possible anymore. The advantage is that you don’t need to carve a plate for every color. The disadvantage is, that when your last print is done, you can not add another one. After printing a certain number with the first color, the number of prints is set.

One of the most striking elements of your woodcut prints is your use of bright colour. What influences your colour palette and how do you approach this aspect of your work?

Mostly I work with 3 – 5 colors. Its due to the fact that every color layer is a certain effort. I’m saving a lot of time (and work) by staying reduced. A nice side effect is also a stronger expressiveness. When you’ve got only 3 colors – they have to be loud! 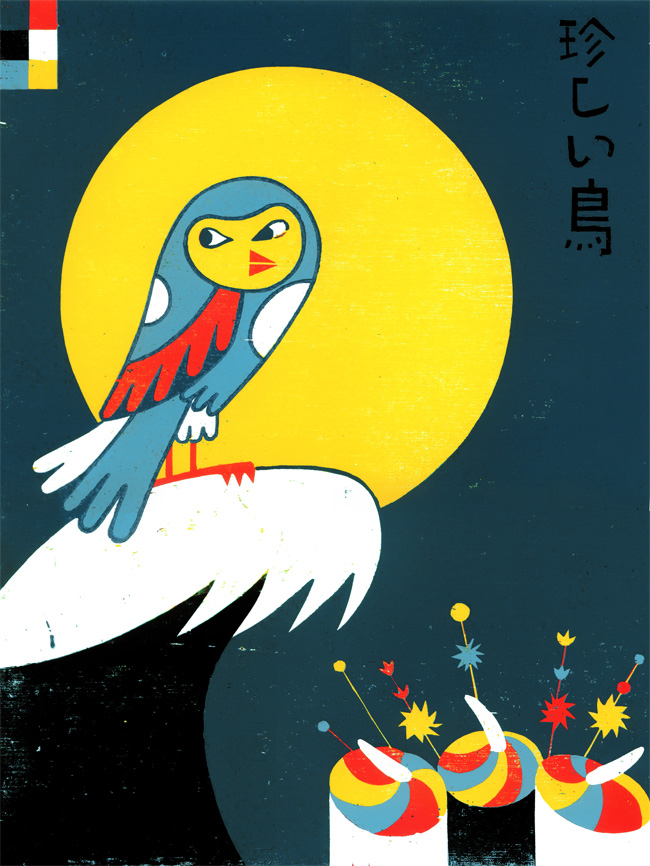 Some artists like to work in solitude and others prefer creating in the company of others. You currently share a studio called ‘Dadaluxe’ with some artist friends, so is it right to assume that you’re happier working in an environment with a certain amount of creative buzz? What makes Dadaluxe a great place to work?

Unfortunately the Studio Dadaluxe doesn’t exist anymore. But, well… I found a nice new place here in Duesseldorf. It’s a bit smaller, but the atmosphere is similar. A very good place to work! 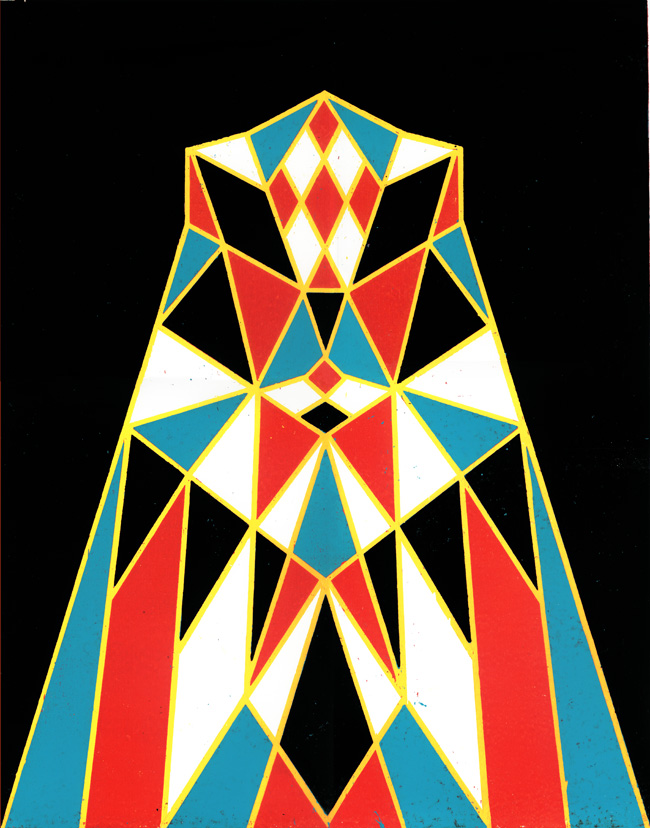 In your bio you state that you have a preference for placing the protagonists within your work in awkward situations. What is it that compels you to focus on capturing these uncomfortable moments?

It’s the aspect of story telling. I like the idea that its maybe a snapshot from a movie. A little riddle, a situation that makes you curious for more. Another point is a common sympathy for unlucky devils. The cartoon world is especially full of these characters and I think I can speak for everybody – we have a heart for them – at least since ‘Oswald the Rabbit’. 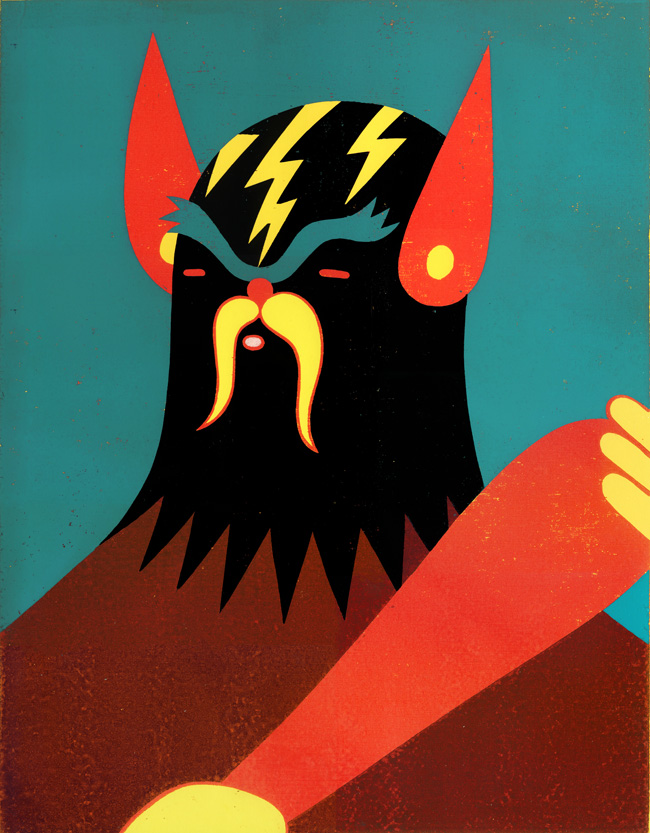 You have sited ‘old fashioned cartoons’ as an inspiration. Talk to us about some of your favourites and why you love them?

The best example is actually the one I have just mentioned. ‘Oswald the Rabbit’. He is the precursor to Mickey Mouse. Please have a look at these fabulous old movies. They look so amateurish when you compare them with contemporary cartoons. And it’s this ‘low quality’ that is the quality. You can see it’s handmade! Its completely analogue. These days we have a new view on this: all the little mistakes, that come along with the imperfection of all analogue mediums are welcome. And on top, they are mostly so quite wired. Unserious in every way. Actually it’s similar in the old East European cartoon movies. ‘Nu, pogady!’ for example. It’s the most popular cartoon series in Russia. It’s like a counterpart to Tom and Jerry but instead of a cat and mouse, here we have a wolf and a rabbit. It’s candy-bright, multicolored and in a special anarchic way, exaggerated – considering the series was produces in the Soviet area. 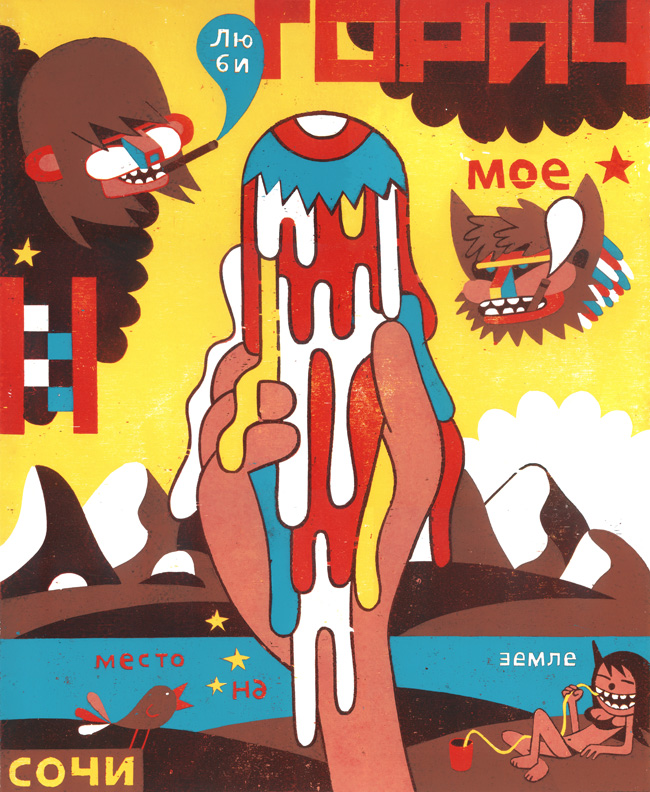 As an artist with an interest in folklore, would you like to share one of your favourite tales or legends with us?

You have to know I was born in Poland and my family moved to Germany when I was 3 1/2 years old. In my childhood I was surrounded with a lot of ‘folklore items’, like straw stars, nutcrackers, etc. I was also familiar with the photos and Super 8 films from Poland, and had a good imagination about the landscapes, the houses, the fences, etc. So when I hear ‘folklore’, for me it’s like, when something is not only old, but also strange and familiar at the same time. OK, actually I do have a little anecdote, not directly about folklore, it’s more about strangeness.

About 20 years after moving to Germany, I started to get curious and made my first trip back to Poland. I remember this very well. And there is probably no better way to describe the feeling I got there, than with ‘familiar strangeness’. I was traveling around and of course I had a stop in Chorzow, Kattowitz (where I was born), and while there I wanted to have a look at my parents old home, my father described it to me very well how to find it.

In these old days we had a habitation in a backyard. And now I found the backyard entrance and there was a steel gate in the meantime but the gate was open so I stepped in. And inside the backyard, there were two women and man, talking to each other. The man looked at me and was immediately a bit angry. He asked me what I was doing there, “Its private!”, he said. But one of the women looked at my face curiously. Then, suddenly she said, “Roman?” It turned out that she was the former neighbors’ daughter and she often took care of me when I was a child. She recognized me after a brief look at my face. That was very strange. And this increased my feeling of, what I call, familiar strangeness, to some degree. 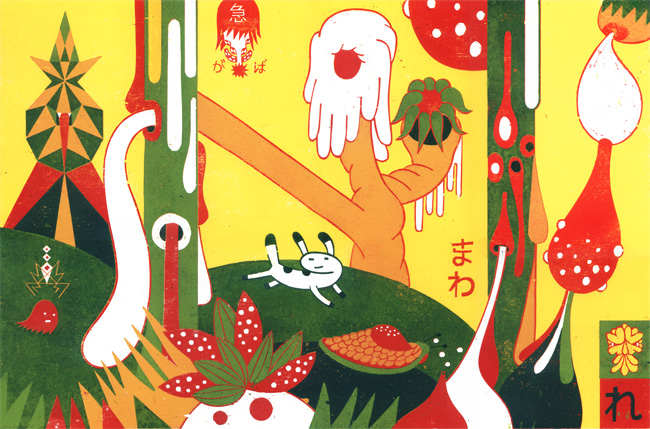 You have built up a strong reputation for yourself within the international New Contemporary Art scene. What are your thoughts about what is happening within the movement and what are your hopes for it’s future?

There is a lot of movement in so many genres and techniques, at the same time and next to each other, but what I can see, and what is relevant for me, is a common renaissance for the ‘analog’ (maybe some people are a bit tired of the perfectness of digital technology) and also a renewed popularity of the handmade, and this has not just come about today (and I hope it will go on for many years). In exhibitions, I like to show not only the prints, but also the wood blocks. For visitors, it’s often a nice reason to start a conversation about the technique. They can see and understand the history of the artwork and it’s a little familiar, because a lot of them did at least linocut printing in school. 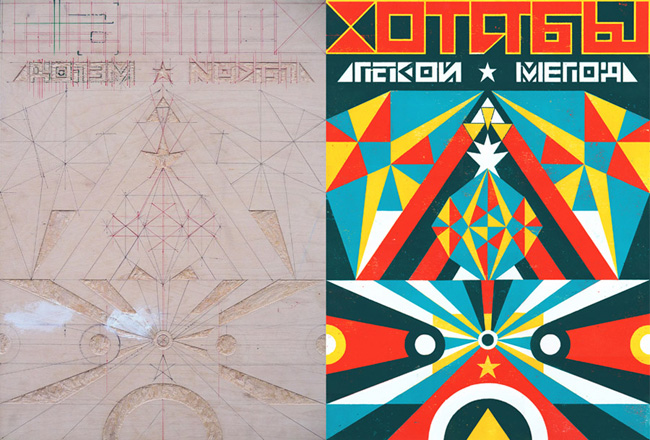 What is one of your favourite memories from your career as an artist?

In 2011 I was invited to Brazil for a collaboration with German and Brazilian artists. That was such a great trip and I got some really nice connections since this time. I’ll definitely go there again in the near future. 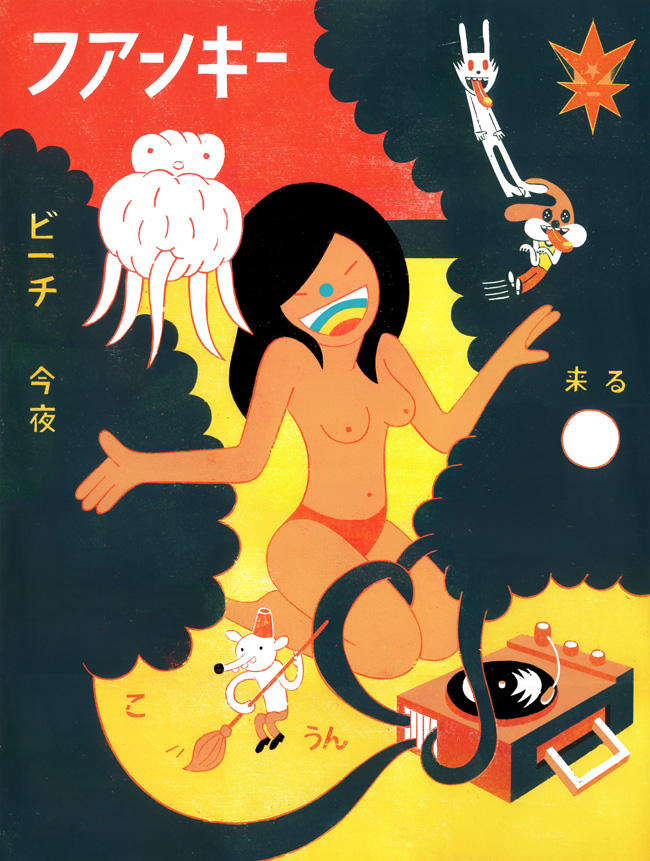 If you could have lived during any time period from the past, what era would you choose and why?

I’m really not longing for another time. I suppose that our level of freedom and independence is uniquely high right now (at least where I live). It’s not the best, but better than everything in the past. 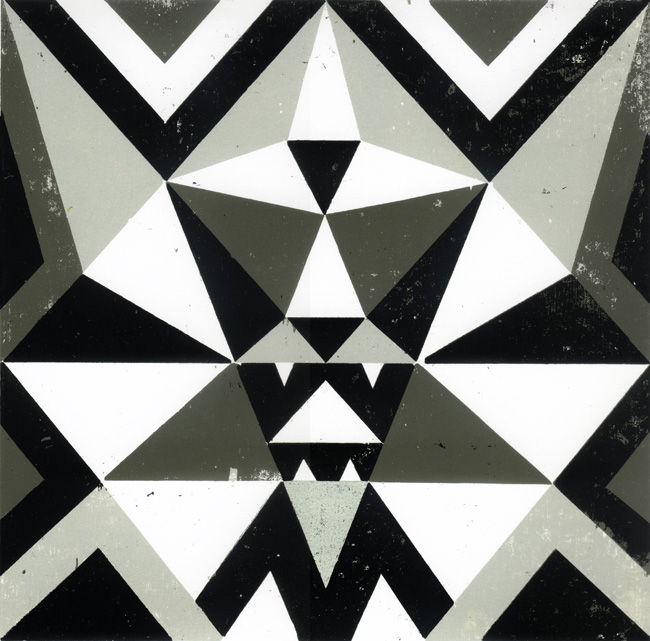 As a fan of Heavy Metal can you turn us onto anything new? What are you listening to at the moment?

In this case, I’m likely going to disappoint you. It’s true, sometimes I like to listening good old hard stuff, but mainly just my old heroes in Metallica and Slayer. This music still has a calming effect on me. I really have no idea what’s new in the genre. Sometimes I do a little Youtube hopping, but I then I realize that I’m sort of conservative in this matter. Generally, I mostly prefer quiet and pleasant music in my studio. After all, I’m not alone here.

What’s next for Roman Klonek?

I’m going to do a lot of new stuff for my next solo show at the Oxholm Gallery in Copenhagen, Denmark. The exhibition opens the 30th of May and will end the 21st of June. 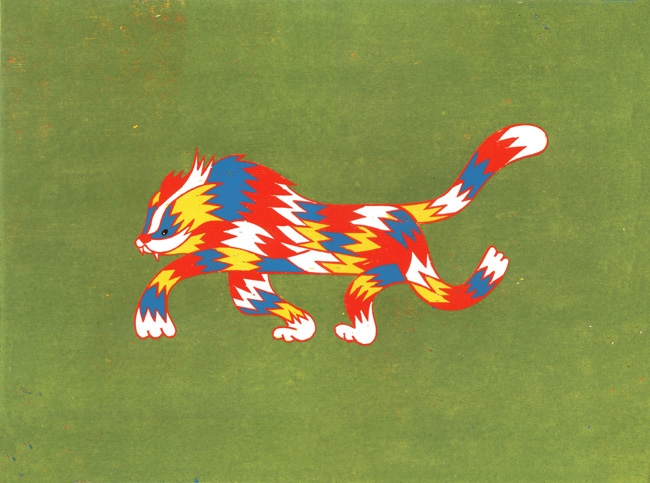 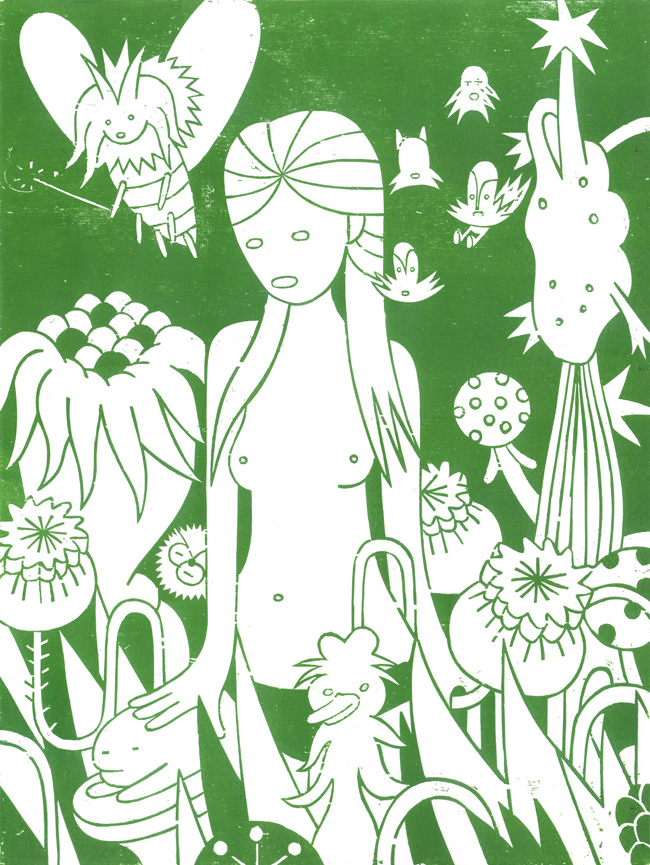 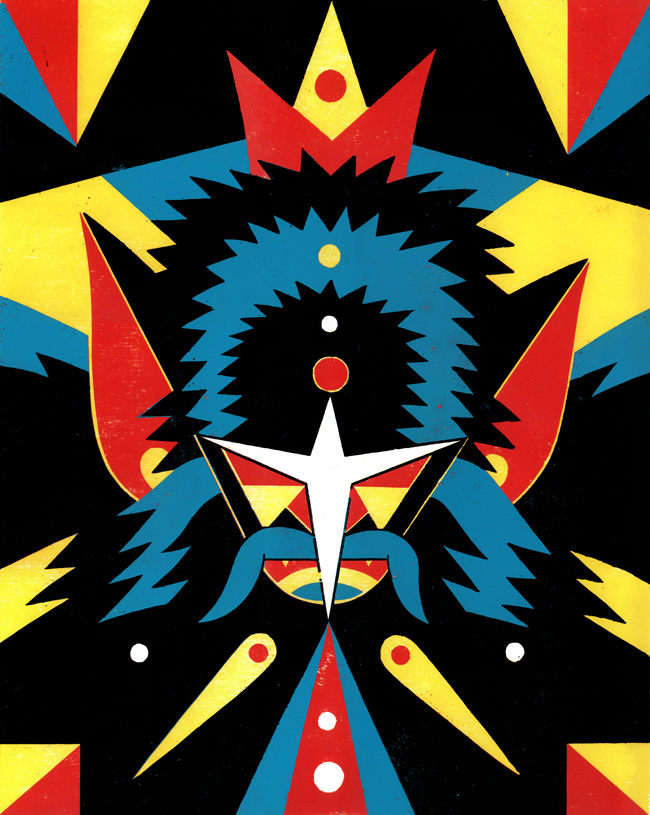 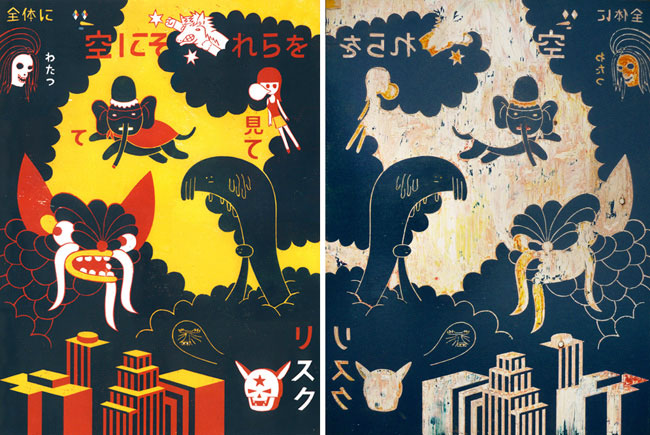 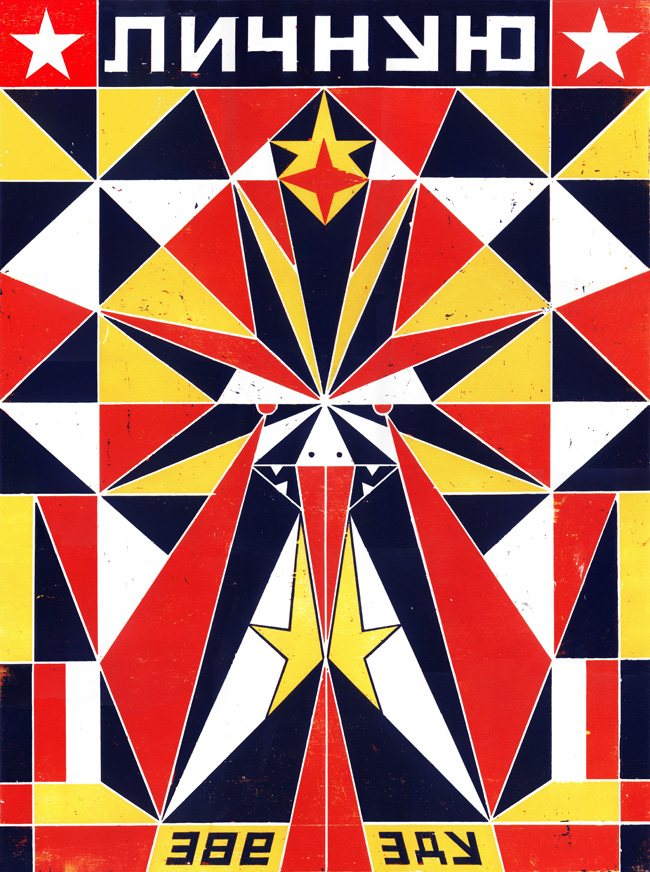 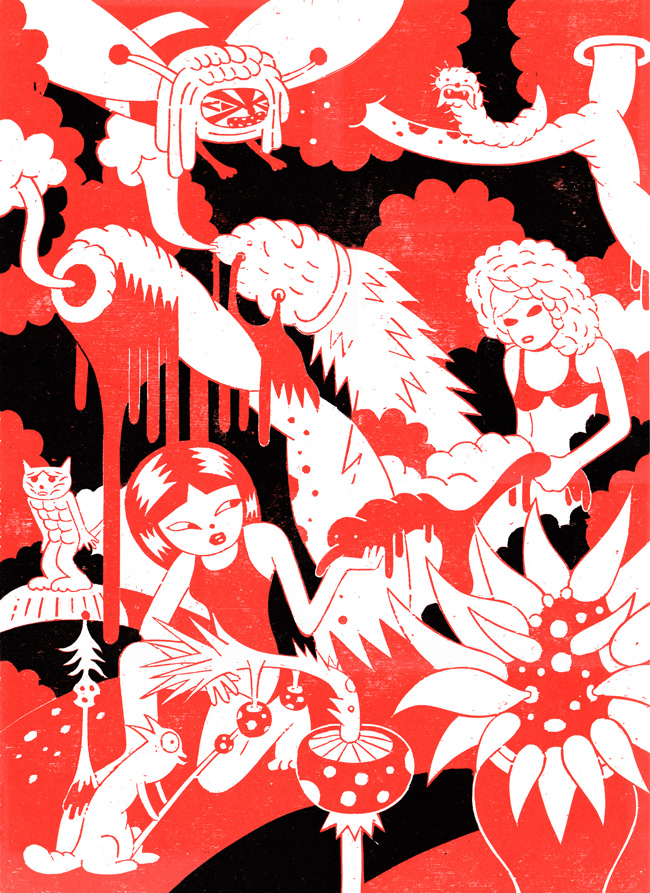 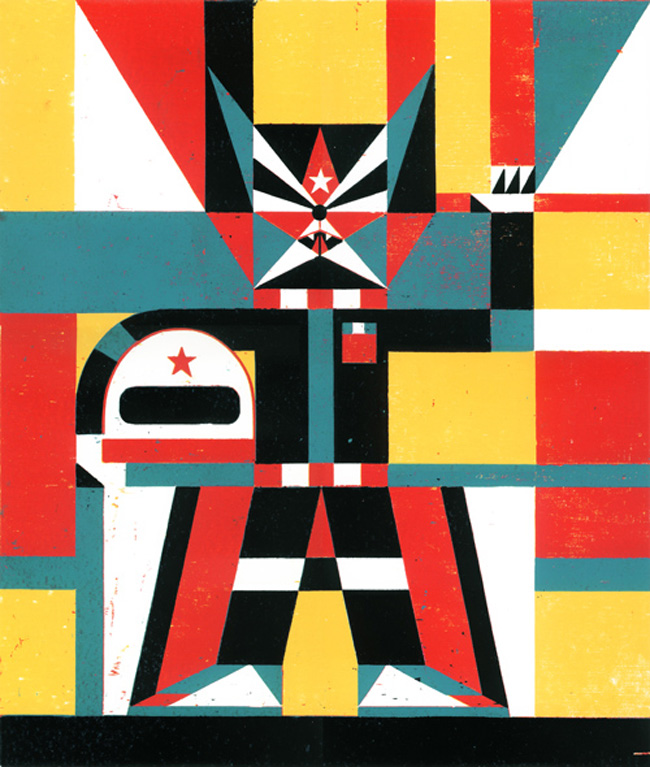