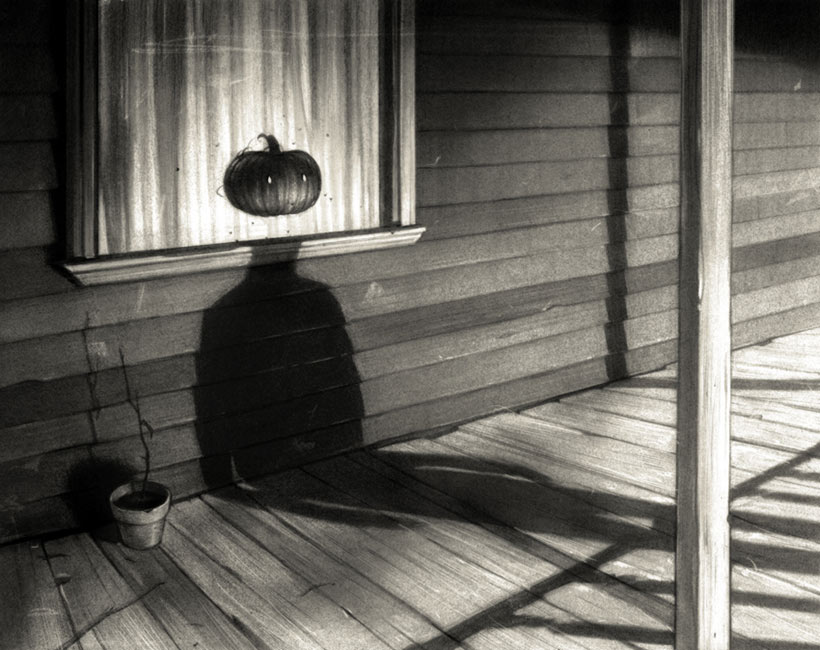 Sam Wolfe Connelly has a profound fascination with the unknown. Having carefully held onto and nurtured the memories and fears he initially had as a child, Sam judiciously stokes the flames of his creativity with the feelings these recollections stir within him. Whether Sam’s narratives contain ethereal ghost like entities or humans in various states of anguish or despair, his foreboding images are charged with a penetrating unease. Concentrating on his development of shadowy and shrouded concepts steeped in mystery, which consistently veer towards the more melancholic and sorrowful spectrums of emotional content, Sam offers us opportunities to explore the dark, chimerical recesses of our own fears and tap into arguably the most primal aspect of our existence.

Sam Wolfe Connelly was born in 1988, and raised in Northern Virginia. He earned his degree in Illustration at the Savannah College of Art and Design in Georgia, from which he graduated in 2011. As an illustrator Sam has worked for numerous high profile clients, such as Playboy Magazine, Hasbro and the band Coheed and Cambria. As a fine artist Sam has had solo shows at prestigious galleries Roq La Rue and Hashimoto Contemporary and has taken part in numerous group exhibits around the world.

WOW x WOW recently jumped at the chance of asking Sam a few pointed questions about his images and their inspirations and what the future holds for him. Find out what he had to say in the following interview. 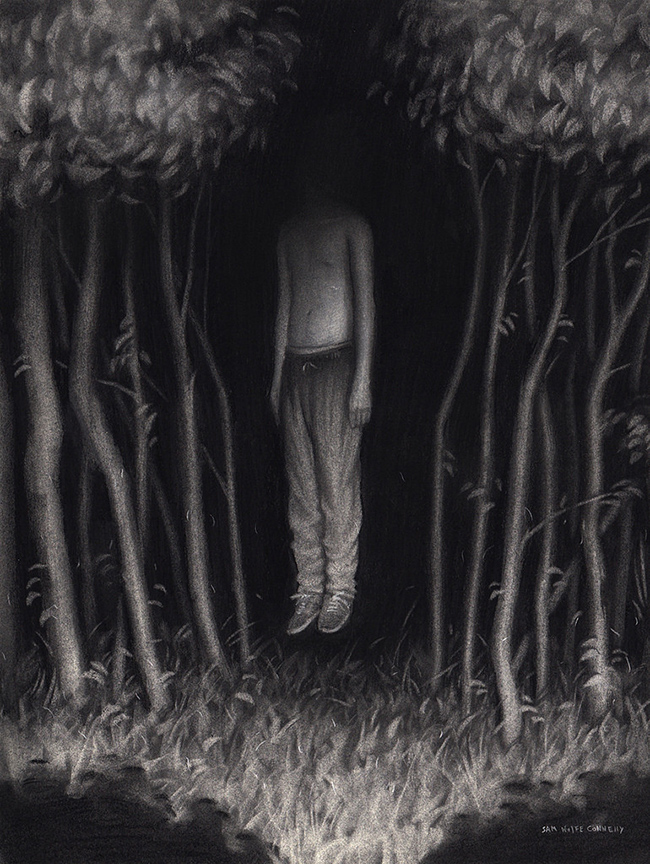 Hi Sam, thanks for agreeing to free up some of your valuable time in order to have this wee chat, we really appreciate it. If you could please start us off by introducing yourself and talking about your background, touching on anything you feel has been relevant to shaping Sam Wolfe Connelly the artist?

Well I don’t want to bore you with the usual phrase “I’ve always been into drawing since I was little,” but I’m afraid that is the case! I went to a lot of summer art camps as a kid. I spent a lot of time alone in my room drawing to pass the time I suppose. I went to Savannah College of Art and Design after high school and then moved to NYC right after. I’ve been here for 4 years now and have been freelancing since I left school. I graduated in Illustration but in the past couple years I have moved more towards painting and gallery work. I live and work out of a basement in Queens in a quiet neighborhood next to the river. 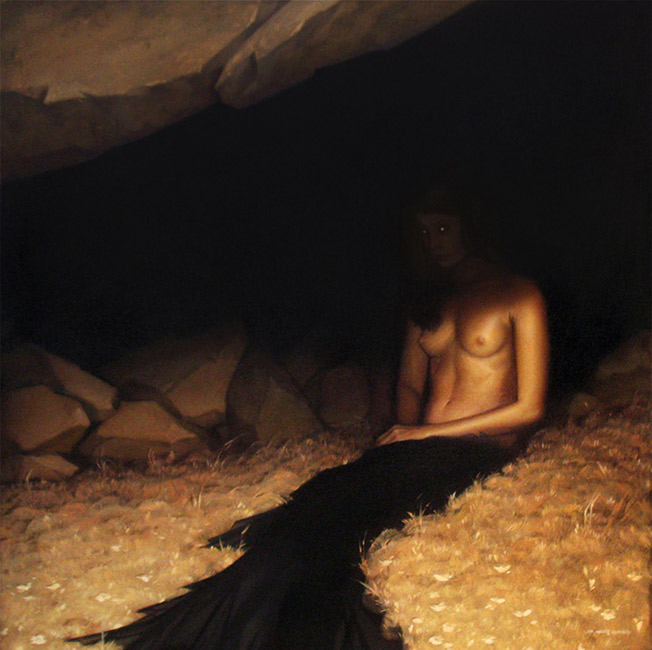 As you’ve just said, your work is currently focused on more personal themes and is ending up on gallery walls rather than in a clients lap. Do you feel like it has been a conscious decision to take on less illustration jobs in order to focus more on your fine art?

I do. I mean I still do have a great time working on passionate projects, where the initial ideas I incorporate in my work aren’t just mine. But it got distressing to mostly be doing work for clients where the finished images felt like they weren’t my own anymore. It felt like I wasn’t able to express myself as much as I’d like and that drawing became more of a burden than it was a place where I could have my own voice. I still do illustration work that gets me excited and that draws me in, but mostly I’ve been focusing on personal gallery paintings where my heart has always really been. 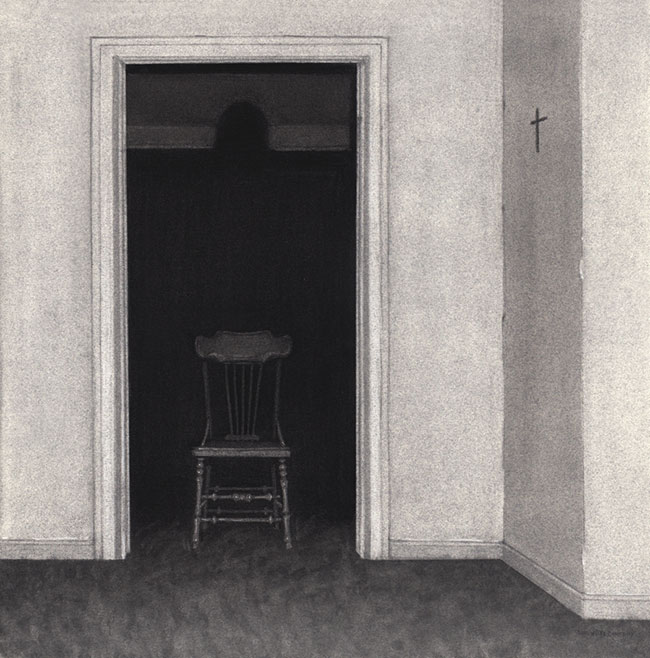 With your personal work being strongly narrative based, in what ways do you feel that your illustrative education has prepared you for telling your own intimate stories?

I always think about how terrible I would be at making comics, because my work has always grown with the mentality of fitting in everything a story needs into one single image rather than separate panels. It just seems to be the way I think I guess. But when I say I try and fit everything a story needs, I really mean everything except the ending, because I think the best stories don’t have an ultimate resolution to them. 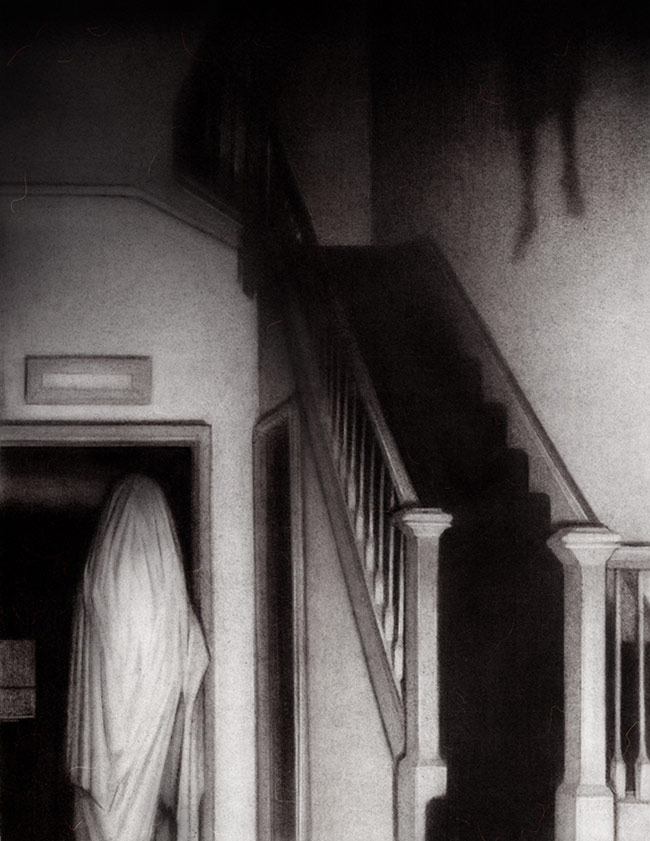 Imaginative storytelling is at the heart of your creative process. In your opinion, what are some of the most important ingredients that go into making a successful visual narrative?

I like imagining that every person or object or pattern in a piece has a purpose. I think you need to whittle away at an idea until you have its bare bones in order to make it interesting. Its something that I don’t believe takes away from the complexity of an idea, but instead enhances it, because when you’re dealing with that balance between vague and direct, the pieces of the puzzle may be simple, but its how you arrange them that gives the whole thing depth. The ultimate ingredient in the construction of the painting will always be the viewer, because in the end that will be what creates the narrative, not a humdrum of strokes of paint on a canvas. 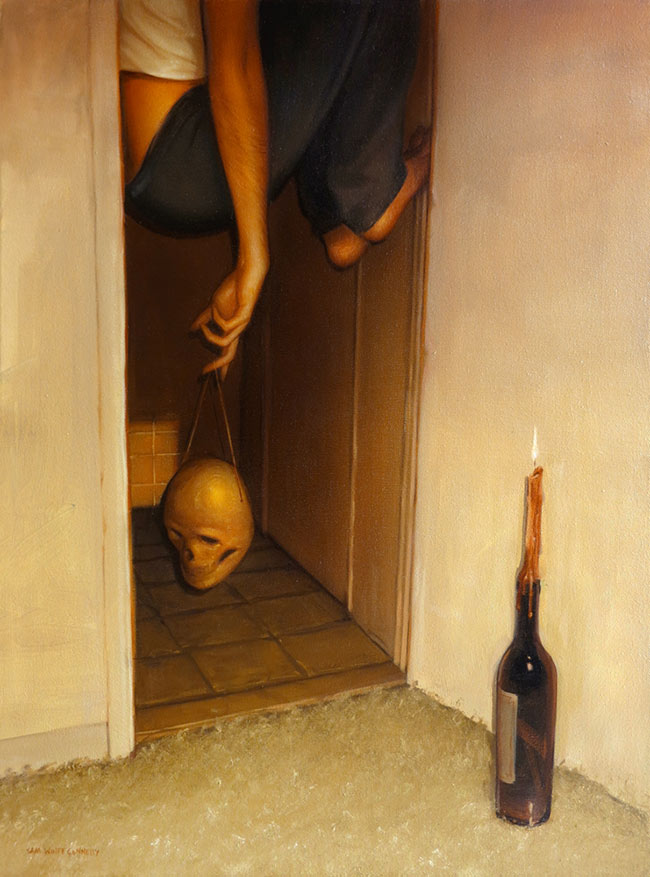 How do you approach the creative process with regards to your personal work? Talk us through how you construct a painting. Do have a concrete idea of what it will look like before you get started? What type of reference do you use?

I have a hard time just sitting down and thinking something up. The idea process for me is always the longest part of making the piece. So to help with that a lot of times I’ll write down ideas in short little poems or stories. I don’t sketch very often and it’s much easier for me to jot down my ideas with words instead. I always have a backlog of things I’ll write spontaneously around 4am that I can use for future paintings if I can’t think of anything to do. Then I’ll usually try and draw out some ideas of how to best turn those written ideas into images, pick one, and go to a final. But there are a lot of times that I won’t know what the painting means to me until the very end. Kind of like the phrase, walking out a door and then discovering its actually a window. 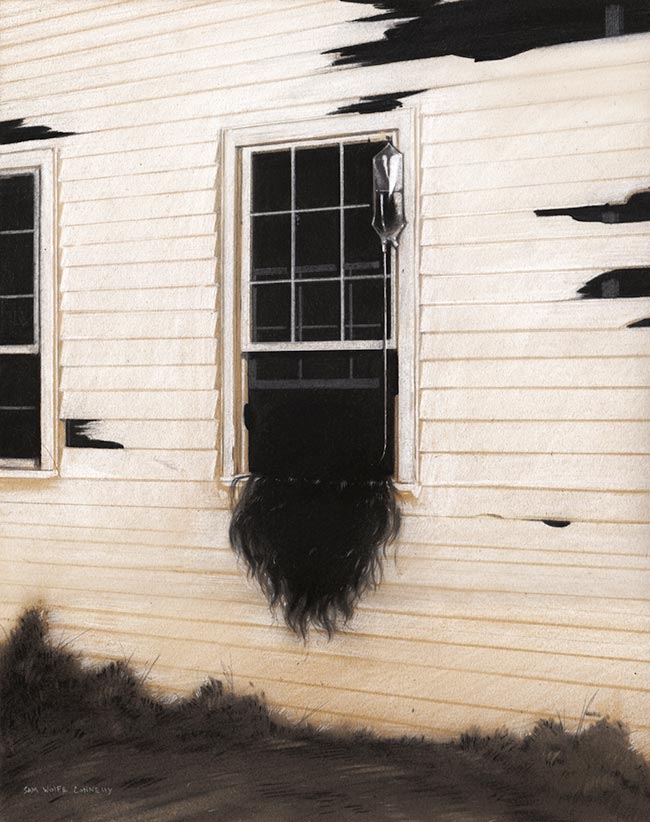 Dark subject matter and images which invoke a range of melancholy emotions from viewers are your prevalent thematic interests. Can you remember what some of the earliest influences were on this aspect of your creative direction?

That sort of material has always stuck with me. I draw and paint a lot from memories as a kid, and I feel like as you grow older, your idea of fear changes. It becomes a fear of terrorism, paying too much for dental insurance, and skin cancer. I miss the feeling of when the world seemed so unknown as a kid. When my biggest fears were ghosts in the closet or what was lurking in the woods when I went camping. I miss the dark corners of my grandmas basement which were perfect hiding spots for hide-and-seek or worrying about what would actually happen if I chanted Bloody Mary into the mirror at midnight. Those emotions seemed so much less manufactured and a lot more real to me. And that unknowingness and naivety has always driven my work. I’m also probably not the saddest guy in the world, but sadness also gives me my inspiration, because I believe that anguish is the strongest human emotion to experience, and I like being able to draw that out in my work to give it impact and solemnity. 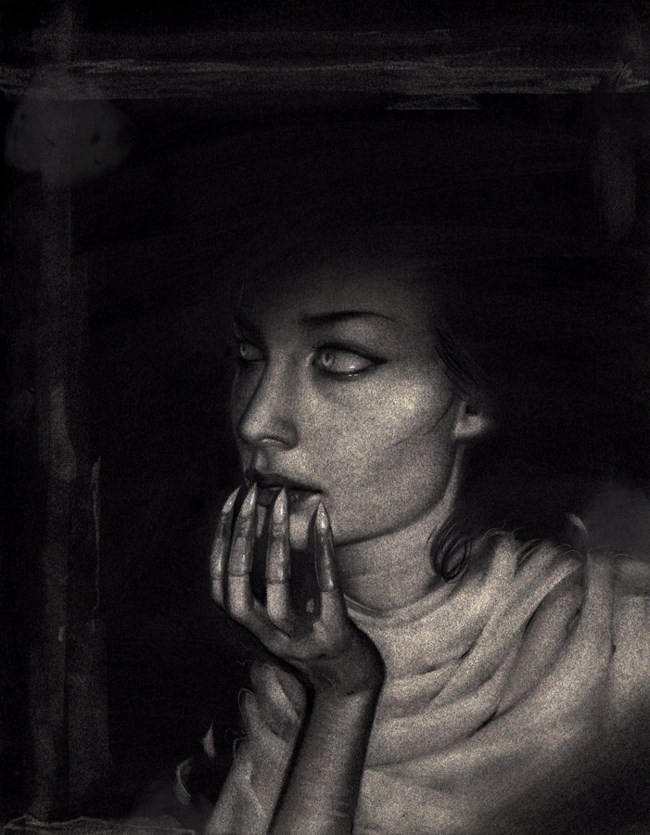 You have stated that you don’t keep too close an eye on what is happening within the world of your contemporaries. Instead you prefer to concentrate on developing your own voice without the aesthetic or conceptual influence of successful peers. With this in mind, give us some insight into your main sources of inspiration?

I pay much more attention to written things or personal experiences. I feel like when I look at others work, I’m not as inspired simply because I’m experiencing someone else’s vision of the world and I want my work to be truly my own. So I take a lot away from personal moments that mean a lot to me that I try and run through my meat-grinder of a brain and put it onto canvas. If I am in need of visual stimulation I keep a large folder of photos I like that I will look at from time to time. Most of them are old, black and white, found photos. 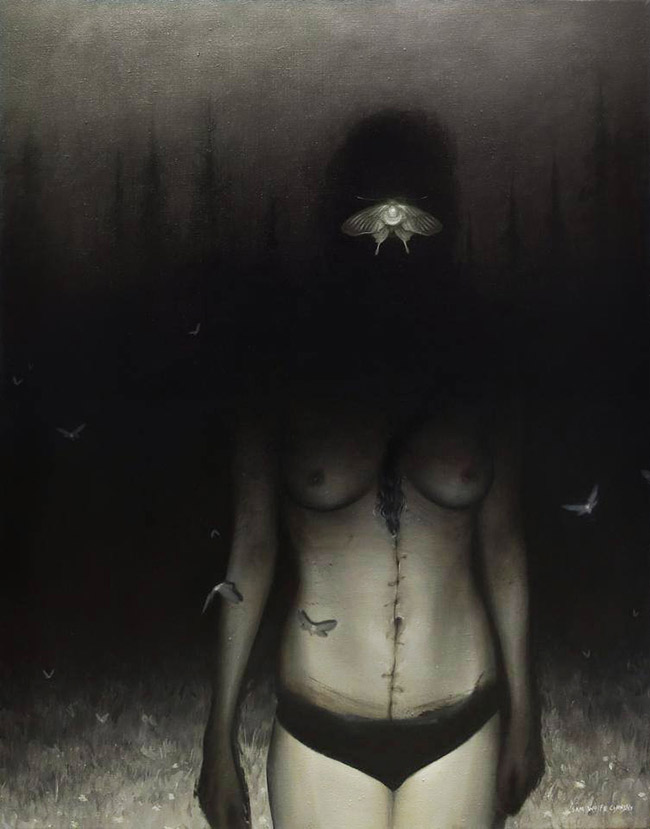 How important do you feel your subconscious is to your creative process? Do you have any practices or habits that encourage creative ideas to rise to the surface?

I’ve tried a lot of things in hopes that I can come up with a routine in which idea making would be made easier, but so far nothing has really stuck. Most of my ideas are so scattered and fragmented that bits and pieces come in at the most inopportune times, which is why I’m really adamant about writing them down in the moment. My phone always has hundreds of random blips of notes I’ll type whenever something comes to me, albeit on the subway or even just grocery shopping.

You have very deservedly made a name for yourself within the New Contemporary Art movement. What are some of your thoughts about the scene and what are your hopes for its future?

I do have some hopes for the community, but I really try not to think about it too hard. There’s a lot of bad, but there’s plenty of good to say the least. I do get frustrated a lot of times, but I think what helps for me is that I just constantly remind myself that I’m making things for me, and that’s what matters most, and to not get discouraged. It’s always incredible to me if or when I hear that one of my pieces really strikes someone, because its like letting a total stranger see me for who I really am without either of us ever saying a word to each other. And I guess if you view it that way, it allows me to see them very candidly. So to honest I don’t have many hopes for the contemporary movement for the future, I just wanna be able to make my work and pay my rent. 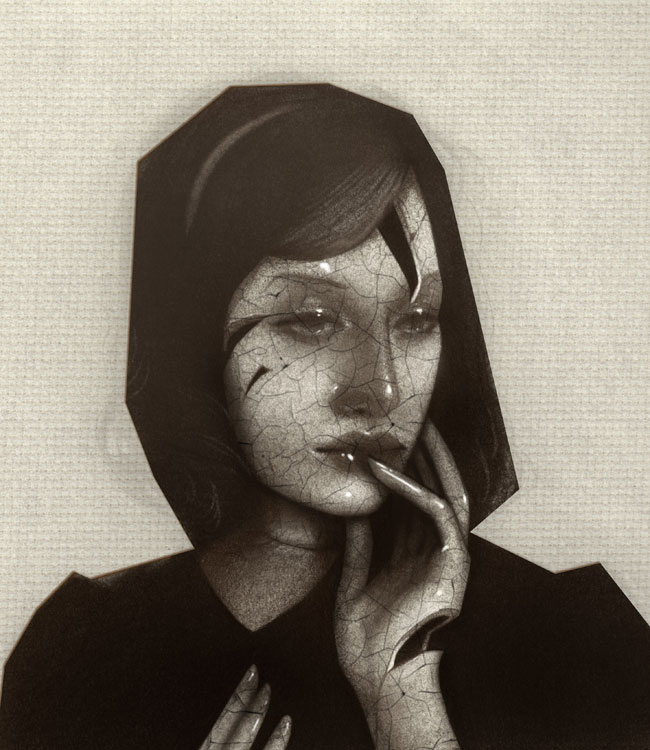 What is the most valuable lesson you have learned? This can be art related or otherwise.

Wolves don’t lose sleep over the opinions of sheep.

I have one story that I hold very dear to me that has made me into exactly the artist I am today, but I believe that for some of us, the curtain staying shut leaves the best impression of who an artist appears to be in their work.

What’s next for Sam Wolfe Connelly?

Your guess is as good as mine! I tend to have things pretty mapped out, but at the moment the road ahead seems pretty untraveled and daunting, so I’m just going to do my best to see what I can see for right now. But expect many more paintings! 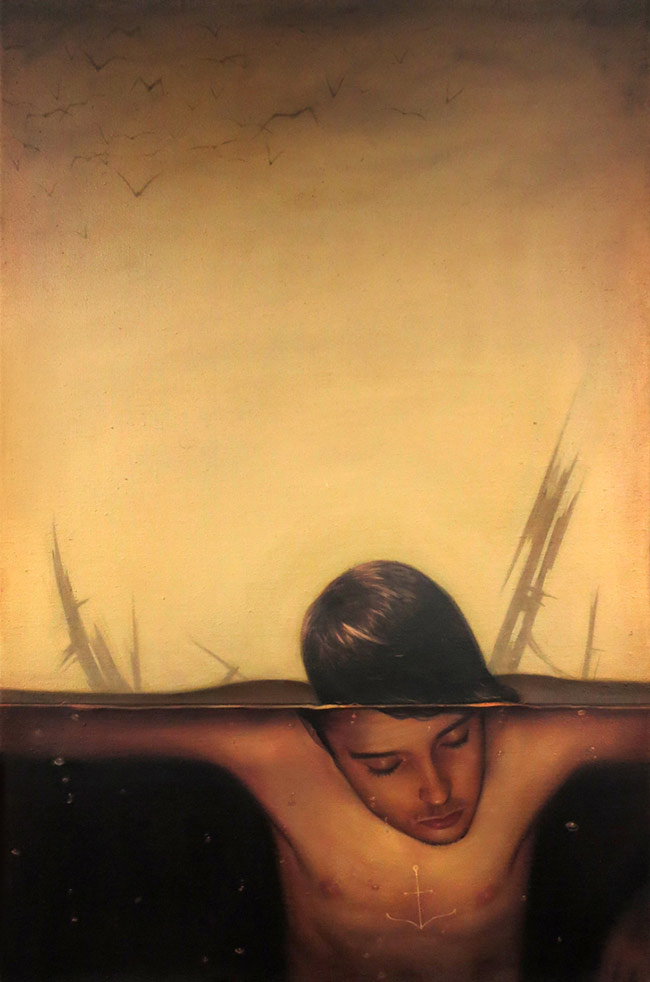 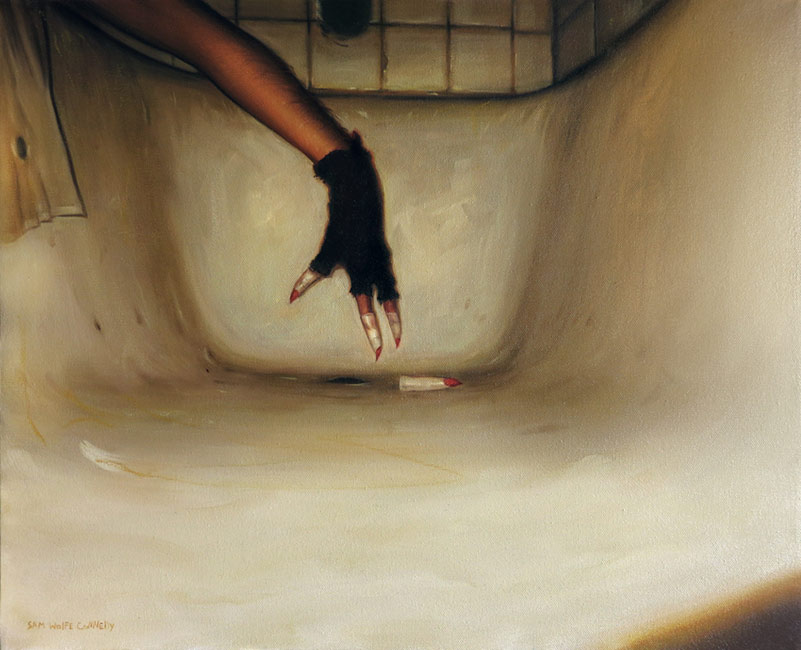 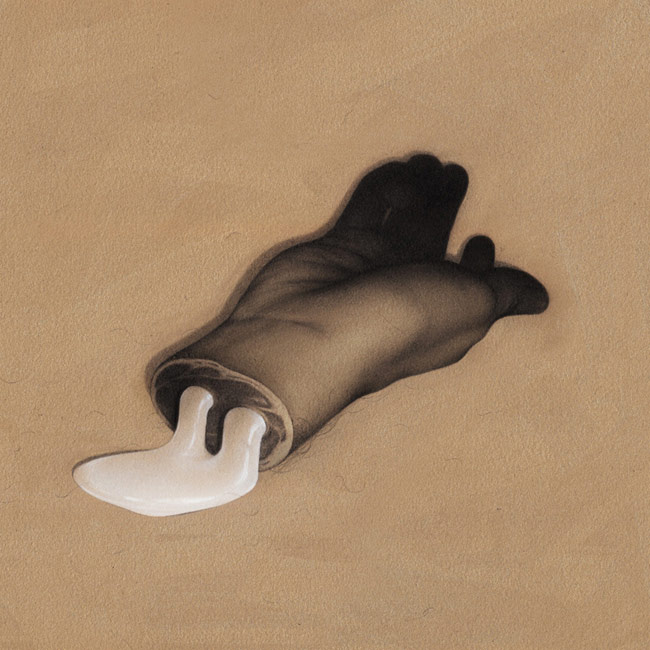 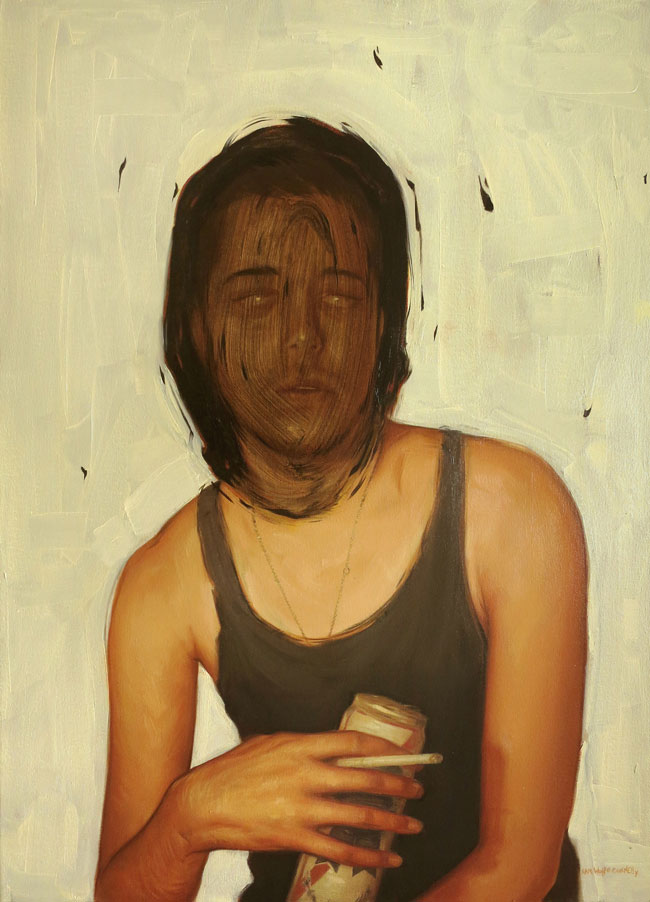 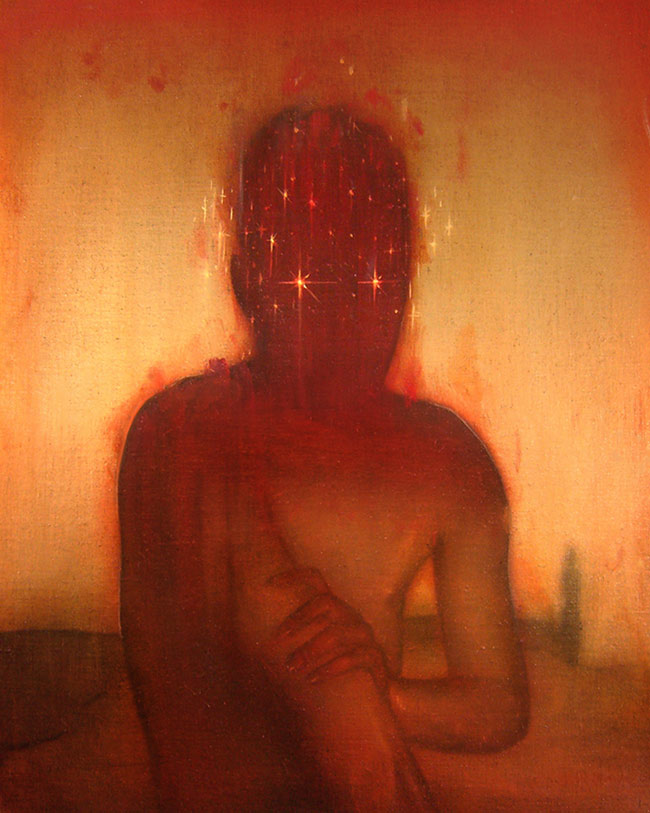 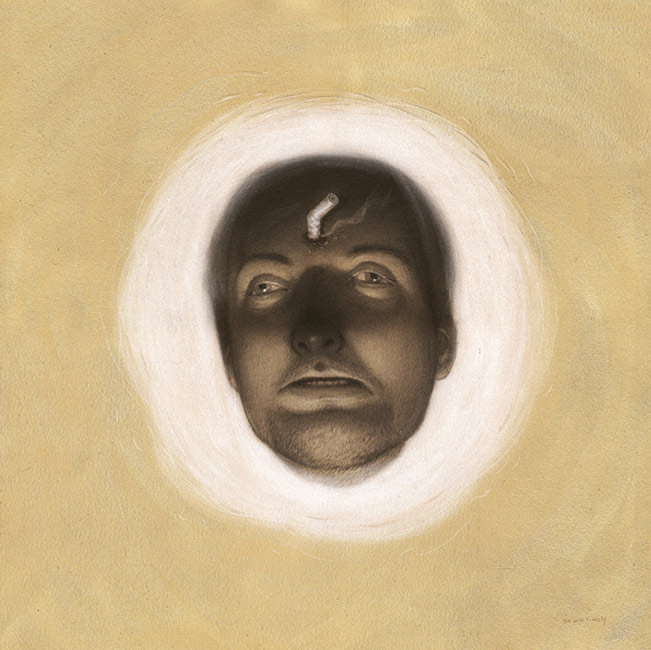 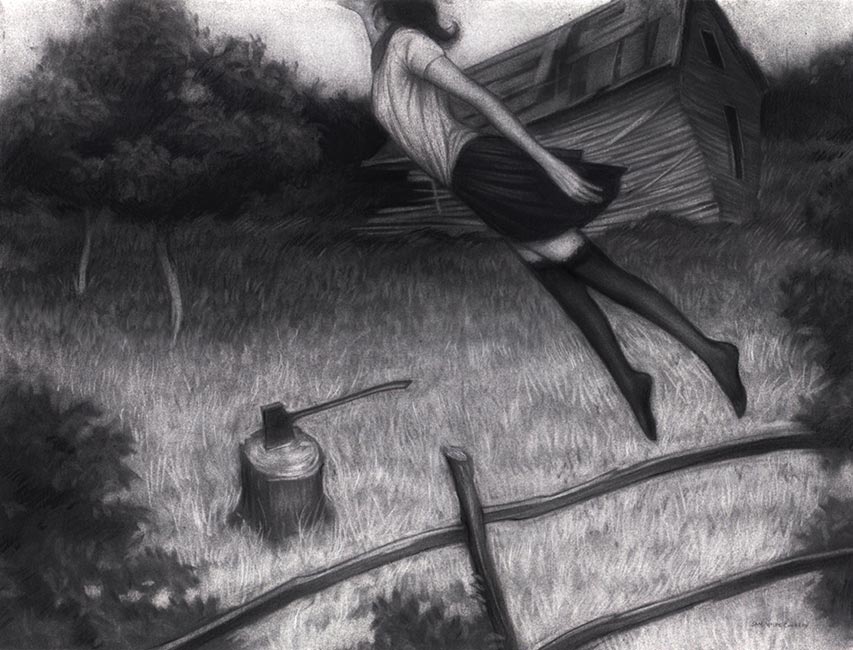 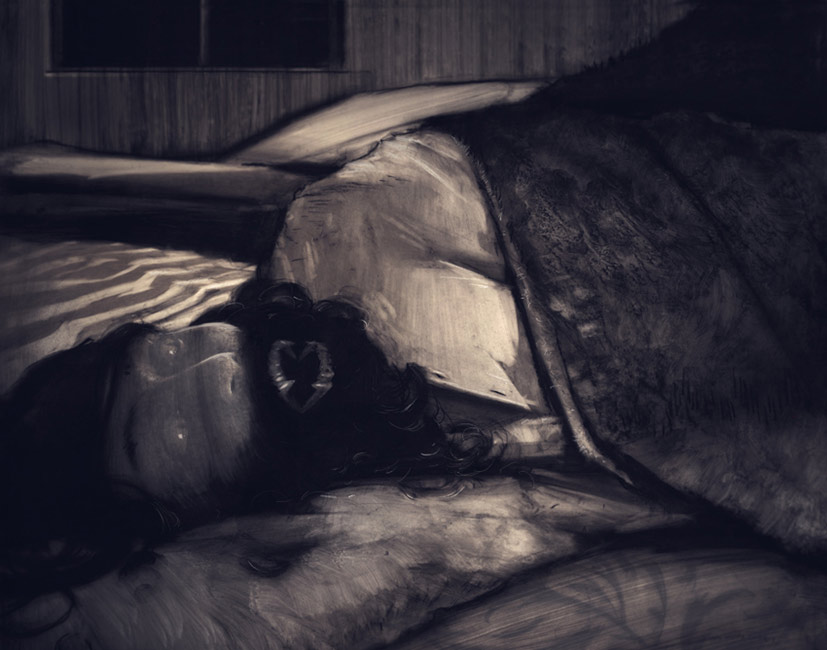