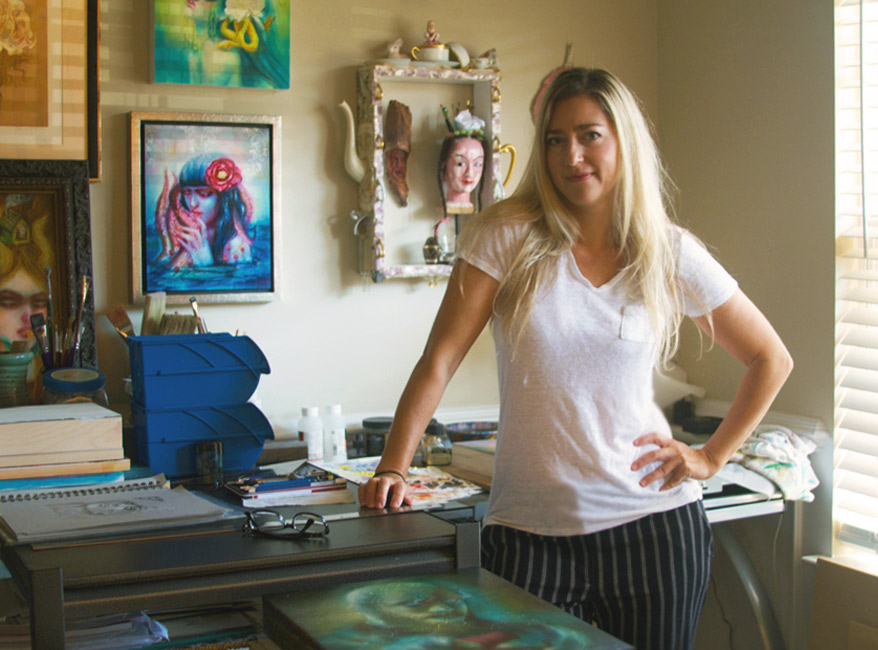 ‘The Energy Anatomy’ by Lara Dann

My childhood was one of constant change and disruption. The strongest first impression that I can recall was that of my parents divorcing and my father leaving. That event would be the erupting and shaping molten rock of the person and artist I am today and continues to be a foundational inspiration that I draw from.

Before I open the window into my childhood and if you read no further, I want to share this one thing with you: that one of the most important things I have learned about living as an artist is that success (both personal and professional) has very little to do with ‘cultivating perfect formulas’ and everything to do with the ‘energy anatomy’ of our life experiences and how we transfer THAT into our drawing and painting process. 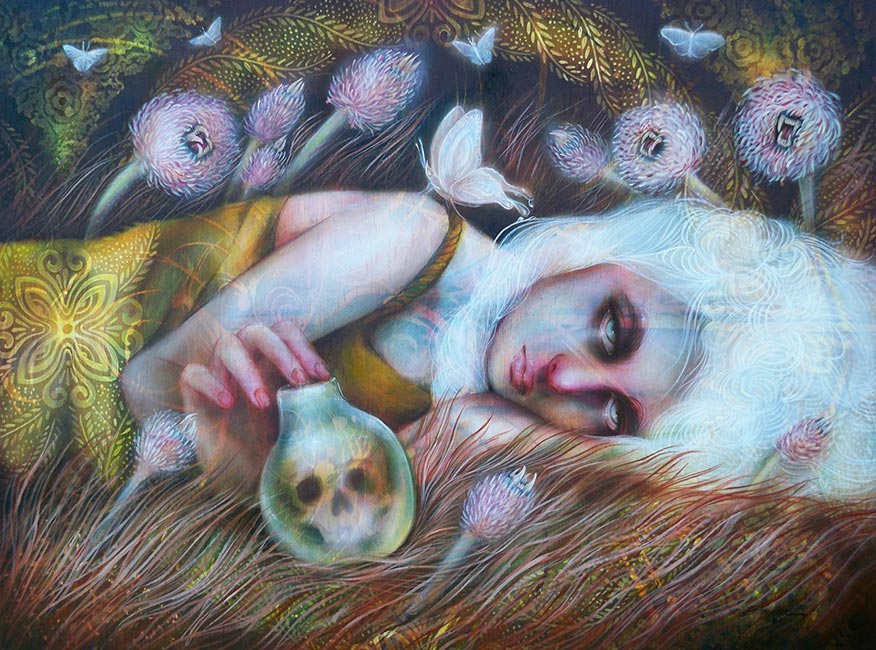 I remember when I was 3 or 4 years old; my father visited me briefly in the dark two-story apartment that my mother and I were living in upstate New York. He brought me a doll house with a little doll set called ‘The Sunshine Family’; a plastic little triad of a mom, dad and one blond daughter, and it would make me the saddest I’d felt in my few years of life. He left, and I wouldn’t see him again until I was about 11 years old. At this impressionable age I understood feelings of disconnect and loneliness and I immediately started expressing it- pencil to paper. My mother said I drew sad faces for hours and this became my escape and coping mechanism. 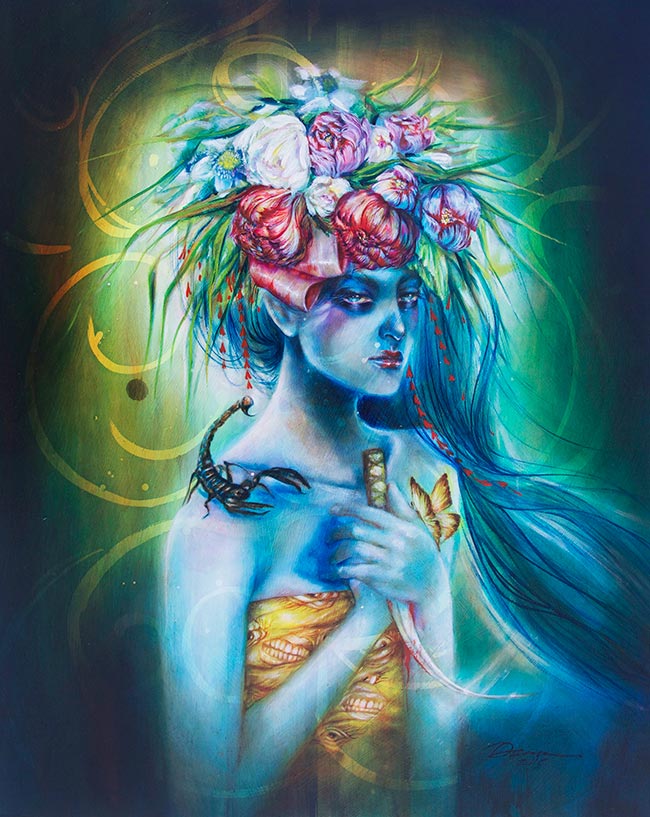 Soon after, my mother and I left NY, and we went to Southern California where I would live-out most of my childhood. I would experience temporary homelessness, bullying, and harassment. There was very little stability with our constant moving and adjusting, however less by the time my mother re-married when I was age 12. I gained a loving stepfather and two sisters. I went to about 16 different schools from Kindergarten through until High School graduation, living in Carpentaria, Van Nuys, Santa Monica, Lancaster and Dunsmuir CA. Including later adolescence and early adult years; Washington State, Vermont and NY. I was becoming somewhat numb to making the friends that I knew I would only come to leave behind. I had severed so many social limbs that eventually I lost interest in connecting and making friends. Perpetually the “new kid” in each environment every few months or every year, I was socially withdrawn and perceived arcane. Once again, my artwork was the soft place I would land for solace.

With an absent father, the two strongest figurative influences in my life were women. My mother, and grandmother. Both are artists. As a result, strong female characteristics and figures play a continuous and dominant role in my artwork. An ideological feminine Phoenix archetype rose from my internal mythology. 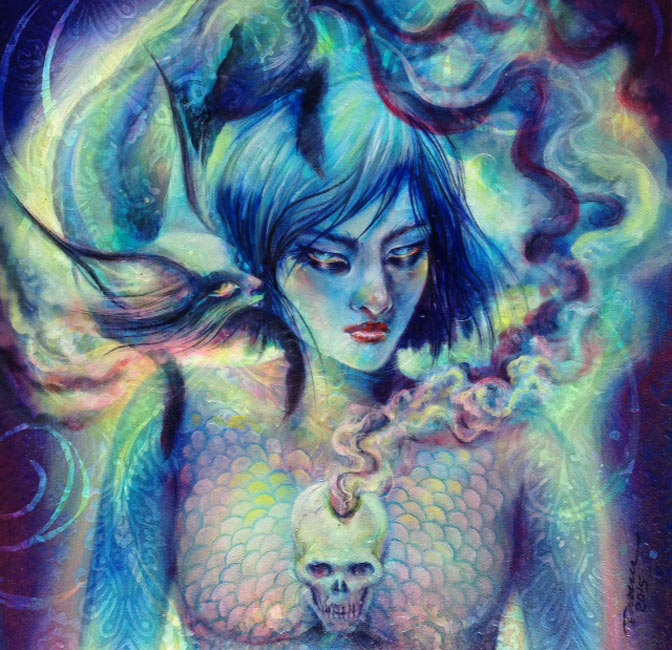 My mother had a ‘Life is Beautiful’ idealistic and optimistic approach to life. I was the opposite. I was inherently realistic and pessimistic. She seemed to thrive on change, whereas I loathed it. As a child, I held practical, hard and realistic views. I demanded the truth about things and she was very good about giving that to me. We lived like gypsy’s, in that we were always transient. She had a hard time staying employed and grounded, even though she is very intelligent and educated. She seemed to always be searching and unsettled and there was little to no support from my biological father. She would read me fairy tales from an old vintage book, and we would strap on roller-skates and roll up and down the busy southern California street sidewalks for miles. We were thrift shop store gals and there was never a dull moment. I knew we were poor, but she told me poor was a state of mind and I learned to really treasure the few things I had and make them last. We are very different from one another my mother and I, and while this much of the time resulted in arguments and turmoil between us, I knew that she loved me. One of the positive things that resulted from this unsettled way of life, was that it forced me to look at the world around me from different view points, become more empathetiic towards others and adapt quickly. This aspect of ‘need to adjust’ to change quickly developed into an integral part of my artistic views and creative processes. It eventually empowered me, experimenting in various media with an unabashed approach came easily and without hesitation. In my opinion, a vital groundwork in which I stand upon today. 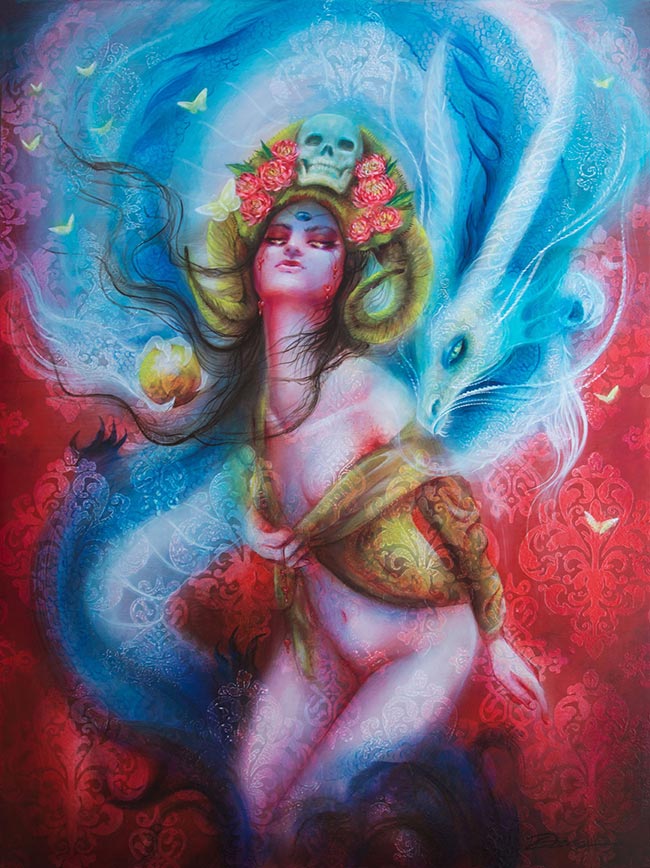 My grandmother was a strong woman. Quiet and introverted. When she was young, she dreamed of being a seamstress and fashion designer in NYC, but dedicated her life to her husband and children. She used to make me the most impressive Barbie doll clothing by following McCall patterns and making them miniature to fit my dolls. I really related to her. We lived with her for a short time in her Santa Monica apartment on California Ave and Sunset when I was in grade school. It was one of the happiest times in my childhood. I walked to the beach after school everyday. I spent hours in the ocean alone. It was a place I could really let my mind free and feel connected to things beyond this world. The vast ocean water has a way of deeply healing the soul and opening up the mind. Sometimes my grandmother would bring her oil or watercolor paints and paint plein air and I would sit and watch her. Then we would walk to the pier and she would buy me those craft porcelain animals to paint. She was a very independent women, never re-marrying after my grandfather died (before I was born) and traveled the world. I wanted to be like her. 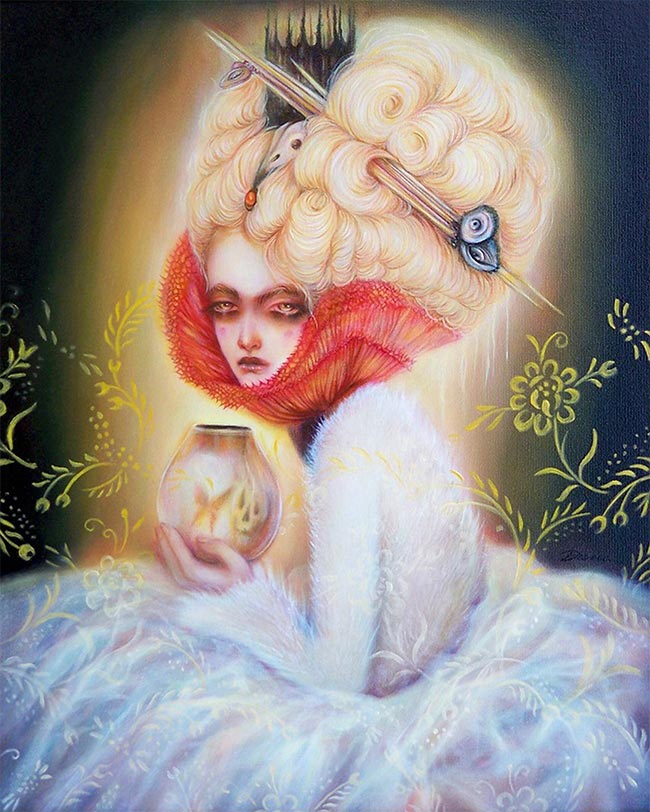 I remember this one time when my mother and I had nowhere to go/live. It was about 1978. We must have been homeless. We went to a Christian bookstore. My mother was talking to the man at the counter (the owner of the store) and I started browsing the cards and pamphlets on display. I remember how intense and expressive they were. There was this one small comic type booklet that had these little black and white illustrations of some boy that looked demon possessed. I was so overtaken by how much of an impact the little drawings had. The emotion and fear they conjured. I studied the drawing lines and the way it was illustrated intently to unlock the secrets of the impressive visual impact so that I too could create artwork with that kind of energy. Having no money to buy it, I stole the little booklet and stuffed it in my pocket. The shop owner let us sleep in his utility closet of his store that night, until he came back later that same night to retrieve us and open his home to us, where his family graciously took us in for a few days. I will never forget that kindness. 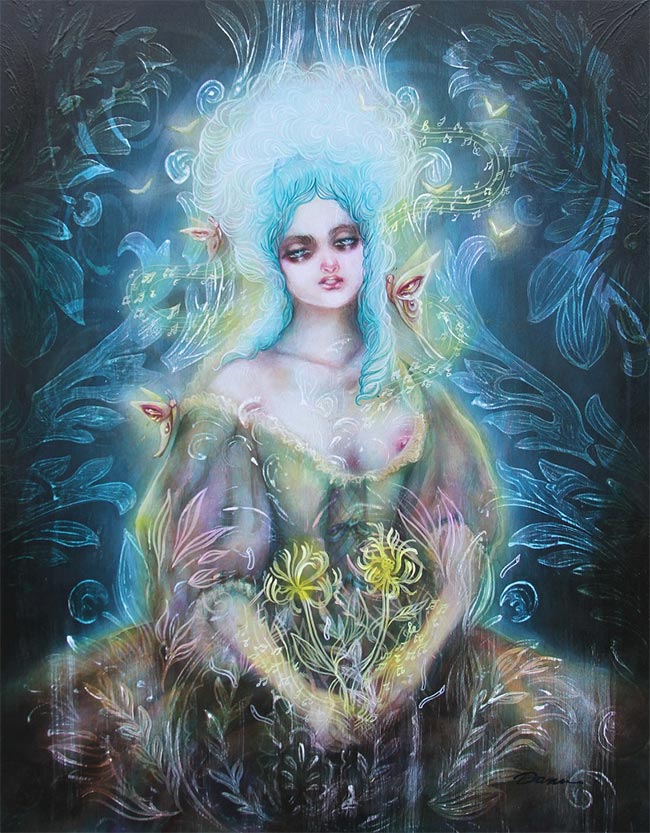 As my abilities developed in my teenage years, I was told I should be an ‘artist’ for a living and the idea of that terrified me. I didn’t want to be an artist. My time spent drawing had become more than a tool or trade, it had become my secret emotional hammock, my invisible friend and my safety raft in a sea of the unknown. It had become the one thing I could control, it belonged to me, and I didn’t want to exploit it. Even today, I am somewhat private about the fact I am an artist. 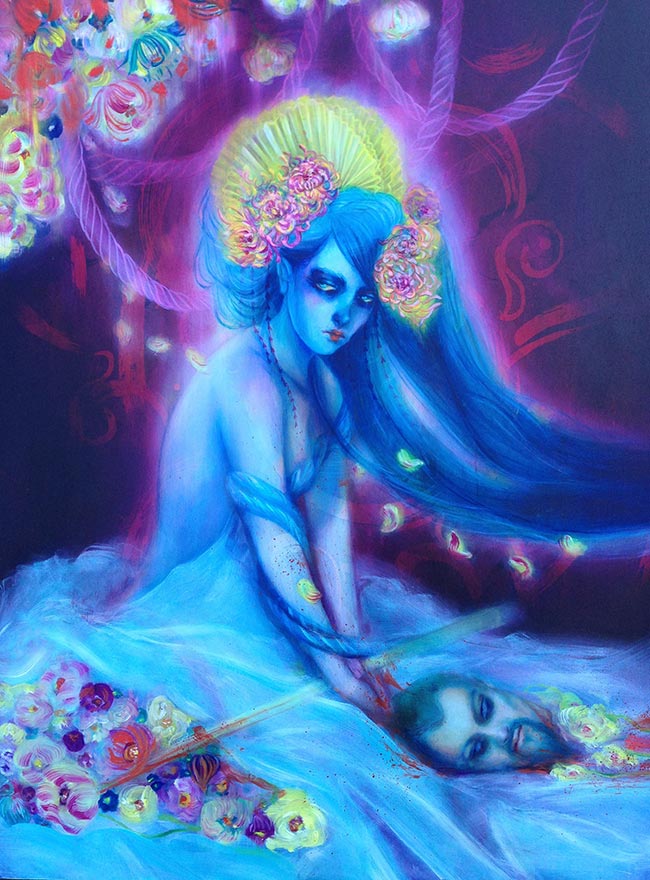 I took vocational art programs throughout Grade and High School, winning small awards from schools I attended in California, Vermont and New York. As creating art become less of a hideaway; breaking out of the exoskeleton of my art existence, I eventually pursued it as a career in advertising as a young adult. After graduating High School, I went to a private art school of traditional design in 1989-90. This was just before the tech age of computer design, so I experienced stat machines, dark rooms and laying lines and paragraphs of typography with adhesive and x-acto knives. We would literally build ads of artwork and run them through a drum for print production. It was an interesting time in adverting and a short lived one too. Immediately thereafter, I was relearning it all in Mac based software. I spent six or seven years in competitive freelance design in upstate NY but I yearned for more meaning in life. I decided to turn my attention towards a career in Massage Therapy. I specialized in chronic and acute therapy/rehabilitation for 12 years alongside chiropractors and I loved it. I gained knowledge of the human anatomy and spirit in a way I never had before, and later I used that to further educate my personal pursuit in painting. During my career as an LMT, I completely turned away from practicing my artwork for several years. It wasn’t until after I became a mother and a wife – had submerged myself so fully into others – that I dove back into drawing again. I was eager to re-connect with my inner core. At this point, it wasn’t for coping and escape, it is for understanding and expressing the path that I am on, becoming more intimate with my choices, (past and present) and translating that into my work. 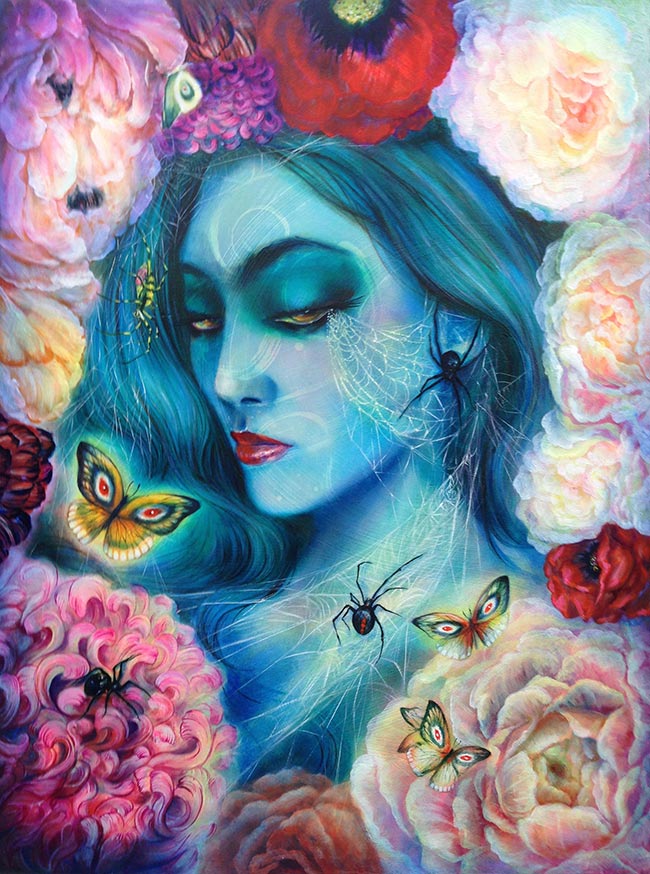 My early life experiences are what I draw from to inspire me today. My work continues to develop and evolve as a series of unclaimed self-portraits. A type of reincarnation in self-awareness. But my intention isn’t to express this from a place of self-indulgence. Rather a window into the ‘energy anatomy’ of my life. For the viewer to look into my work and discover traces of that early childhood grief and isolation, or to pull from it the thread of the feminine strength I am so natively tied to that expresses an archetype of triumph over those things. 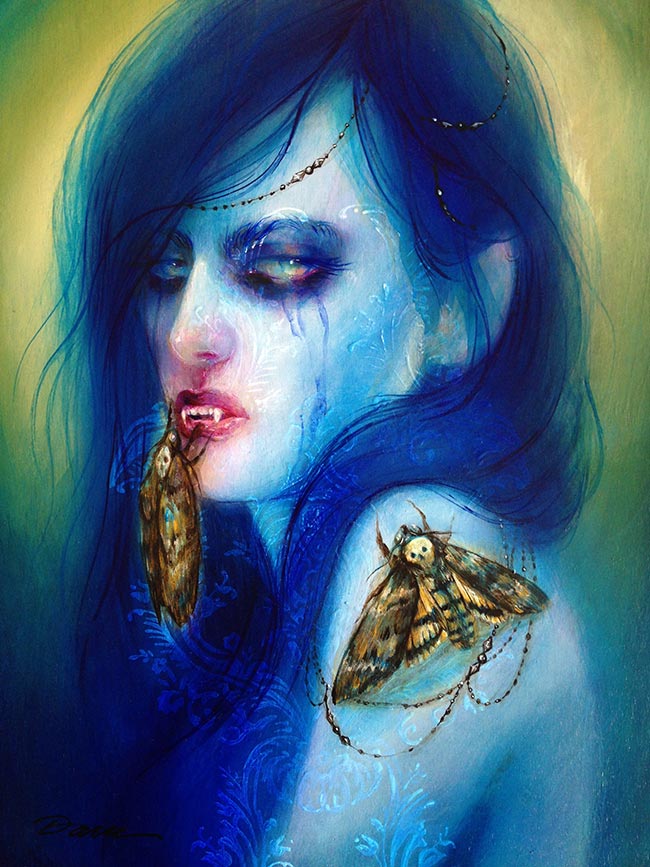 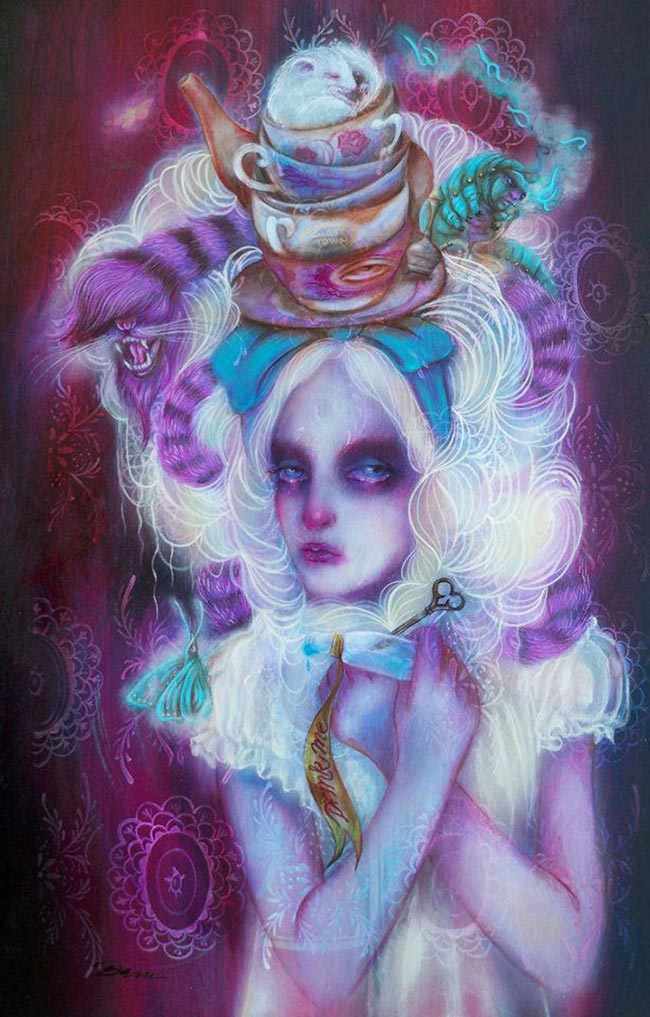 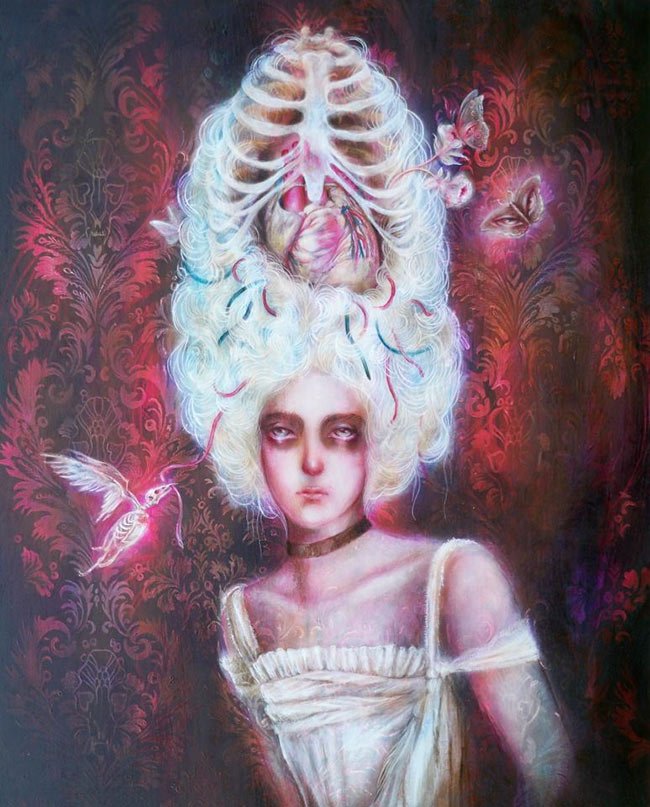 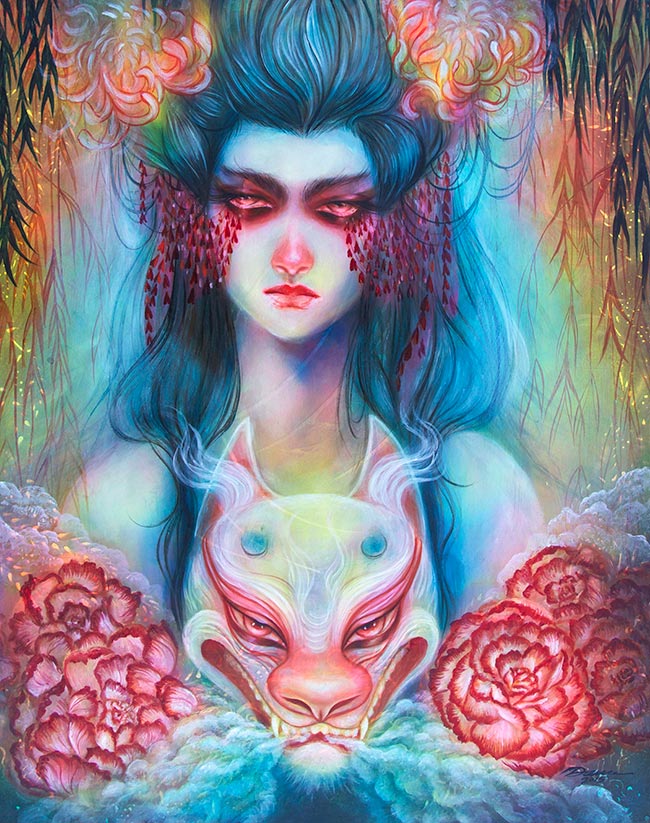 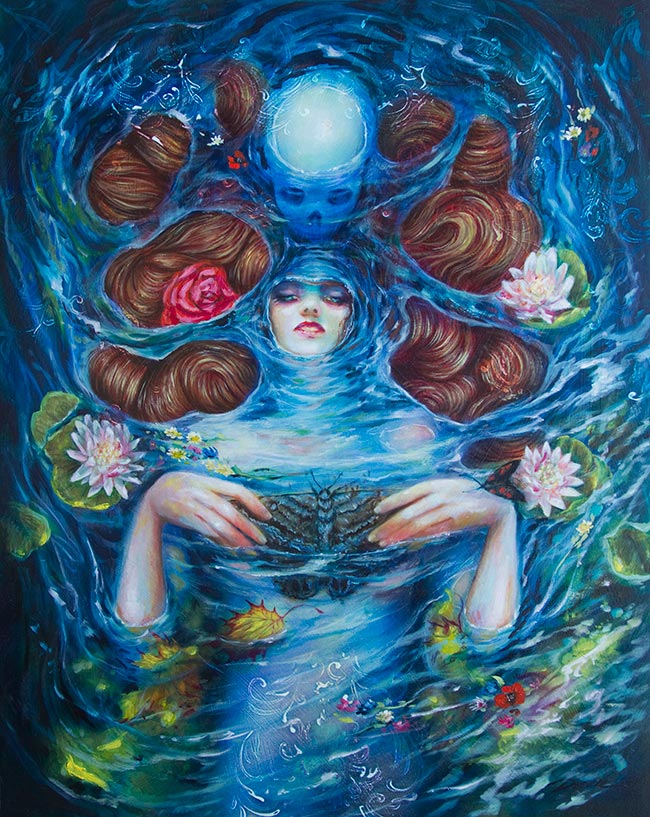 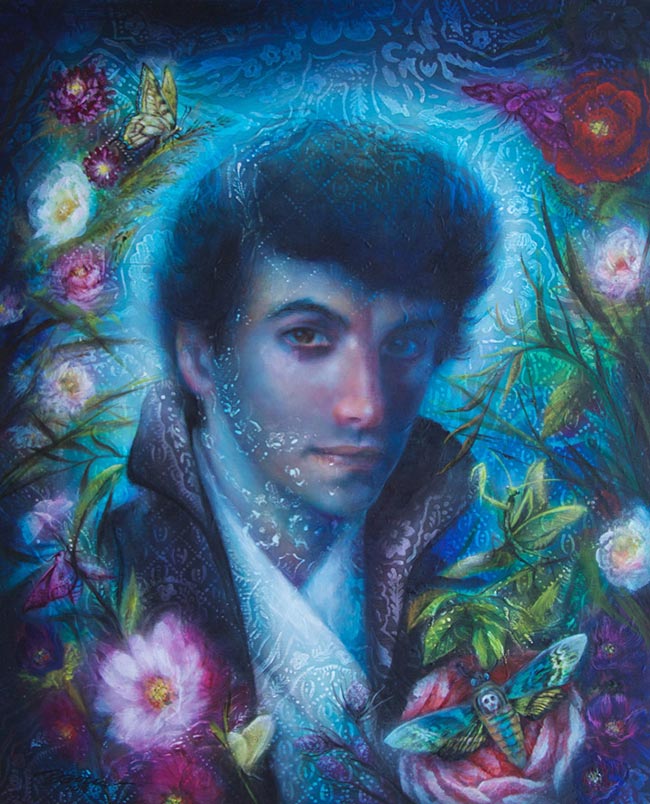 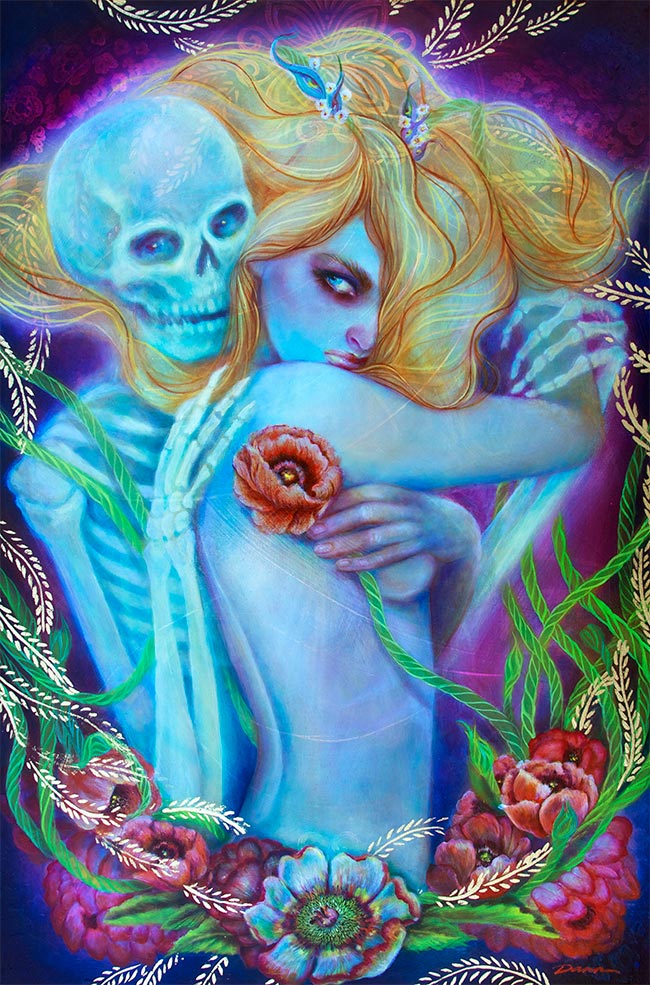 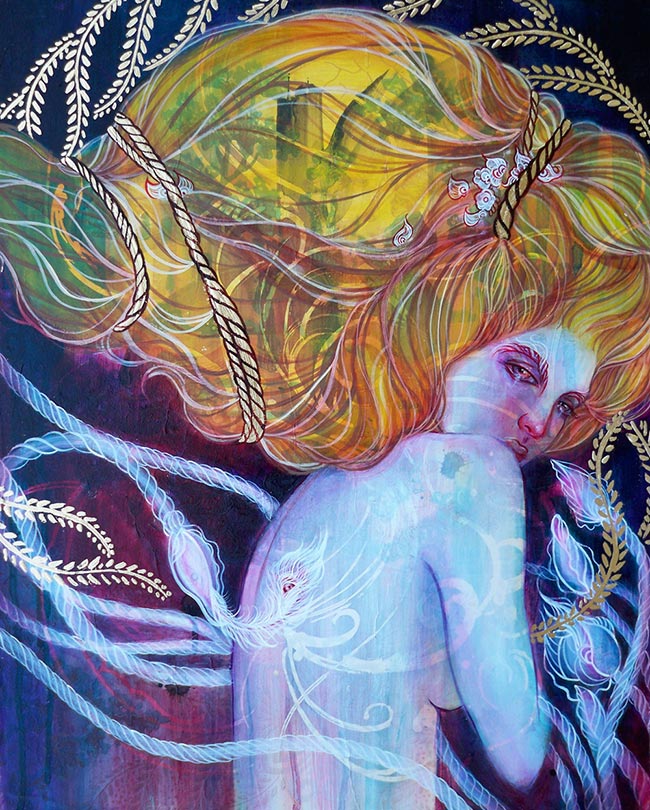