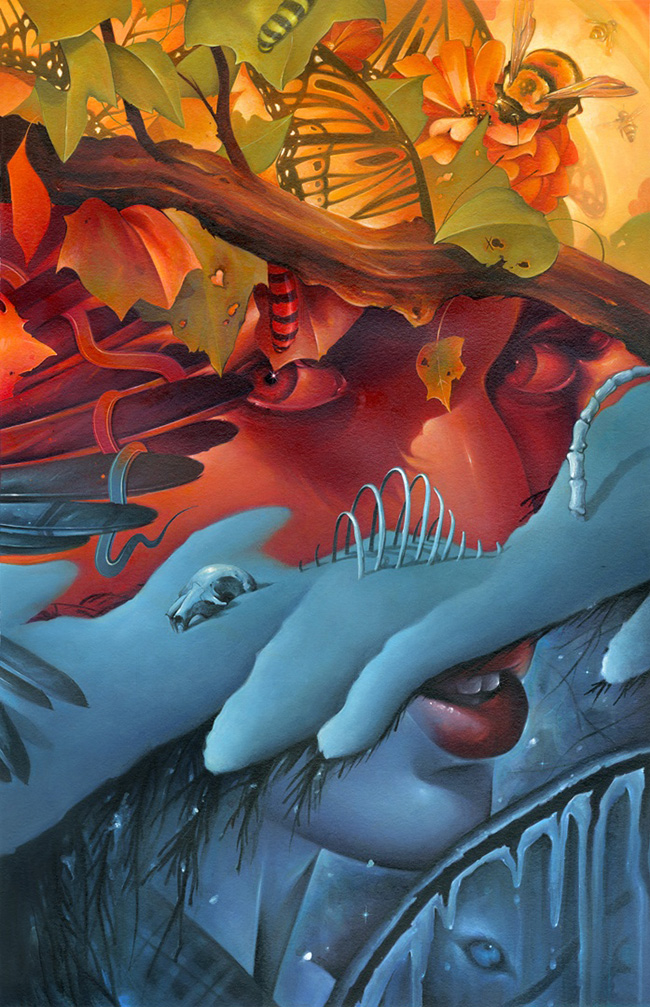 Chris B. Murray is a quickly rising star within the realms of New Contemporary Art and commercial illustration. Constantly challenging himself, Murray explores both fine art and illustration disciplines and moves forwards in each through his discoveries in the other. Chris’ illustration work is becoming increasingly sought after by big name clients, including the likes of Paramount Pictures, Sony and The New Yorker. His fine art is just as in demand and is continually being exhibited in high profile galleries such as Gallery1988, Spoke Art, Thinkspace, Rotofugi and Distinction. He has also recently had a very successful solo exhibition at the ‘birthplace of Pop Surrealism,’ La Luz de Jesus in Hollywood.

WOW x WOW caught up with Chris to chew the fat and find out what inspires this driven young artist. 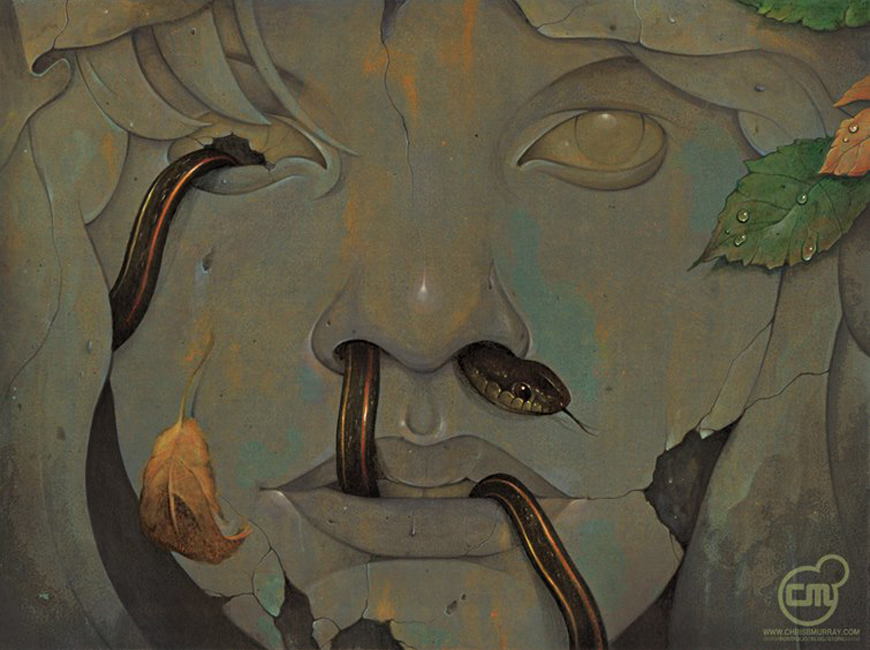 Firstly Chris, tell us a little about where you live?

I live in Philly, PA, the neighborhood is called Roxborough. It’s a fairly quiet suburb with a lot of little bars and restaurants within walking distance.

You majored in Illustration at Rochester Institute of Technology in New York. What kind of experience did you have there and how do you feel it set you up for the big bad world of commercial illustration?

I did, although my focus really didn’t kick in until senior year. The first 3 years were used to party. Money well spent right?! Looking back though, I think it’s just as important to have fun and socialize with friends at parties. As most artists can tell you we live a life of solitude and crave social interaction more days than none. In my senior year at R.I.T. I really honed in on building a portfolio (although it was shit) and soaking up as much information from my teachers and classmates as possible. Four years of school will never be enough time to prepare a student for a career in art. That reality came immediately after graduation.

You now exhibit artwork in New Contemporary Art galleries around the world, as well as work as a freelance illustrator. How easy do you find it to change from doing personal work to commercial and then back again and what are the main differences in your creative processes for each?

It’s really freeing man. It keeps me fresh. I like to work on one until I’m craving the other. The crossover can be tricky at times which is why both sides share similarities with each other. I approach both in the same fashion – thumbnail sketch / refined sketch / final drawing / completed illustration or painting. As I get deeper into my art career I’m thinking more and more about whether it’s good to be able to distinguish fine art from commercial art. Should the two worlds be one or totally separate. I’d like to loosen up more with my fine art work in the future, so we’ll see how that unfolds. 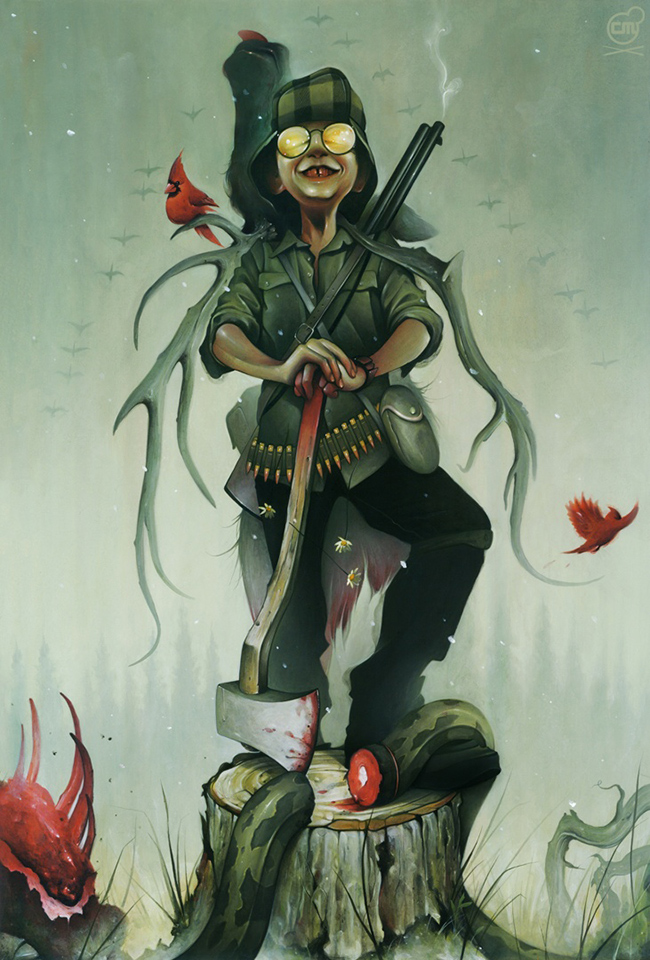 Can you give us some insight into the themes you like to explore in your personal work?

Sure. I’m from upstate NY / Adirondack Mountains. It’s very rural and scenic up there, where the winter months outweigh the warmer ones. Basically it’s Canada (20 minutes from the Canadian border). So I grew up around tall trees, wildlife and lakes. There’s a lot of hunting in my family, which is a common theme in a lot of my paintings. Life is very simple back home. People work, have families, drink on the weekends, hunt, then work some more.

This summer you had a solo exhibition called ‘Seasons Change’ at La Luz De Jesus, the birthplace of Pop Surrealism. Can you talk to us about how this amazing opportunity arose and your experiences working with the owner Billy Shire?

It was a fantastic experience. I’ve been sending work over to Matt Kennedy, the curator for La Luz, for sometime. One year prior, I had a show at Rotofugi Gallery in Chicago. Matt took notice of that show and offered me the opportunity with La Luz exactly one year later. Having a career in fine art is a tricky one. You work so much to prepare for a show and invest so much time and money without a guaranteed pay off. So in turn I was forced to turn down a number of illustration gigs to prepare for the show and I’m happy I did because of the overwhelming support and feedback from my art peers and newly found fans was amazing! 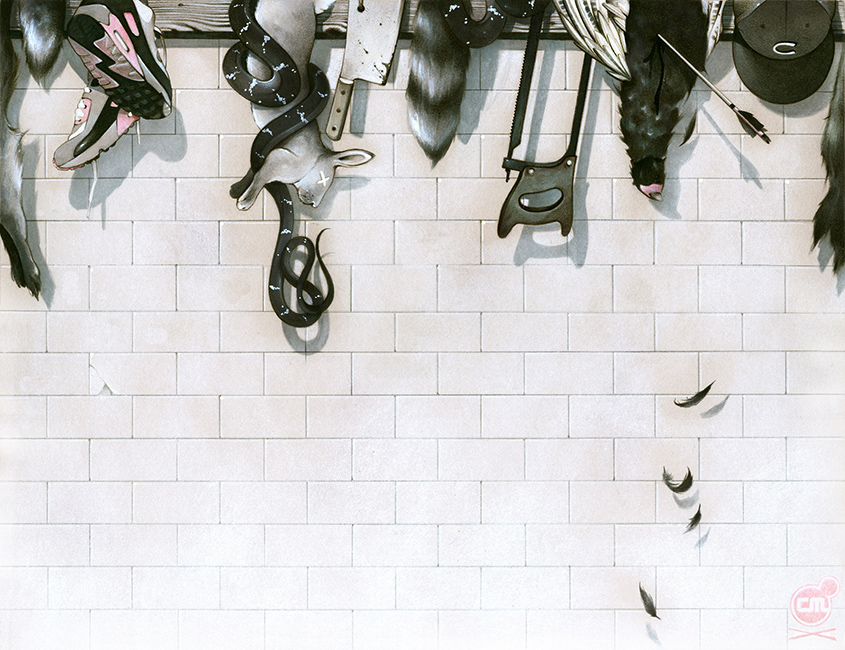 As an illustrator, you have worked for some big name clients, such as Paramount Pictures and Sony and have also started getting into creating album art for hip-hop artists including Demigodz. As a big hip-hop fan this must be a dream come true for you?

It is, I get just as giddy working with my idols in music as I do a big name client. It brings me back to when I was 10-12 years old where I had locked myself in my room late at night drawing summer mixtape covers. It’s something I’ve been doing since I was young and never thought I’d actually have the opportunity to actually team up. It’s surreal. Still brings me chills.

Who or what has been the biggest inspiration to you as an artist and why?

Life, man. Hahaha, I know that’s such a generic response but it really is true. Seeing people have to work a dead end job their entire life. Not happy. That’s enough inspiration for me. I know I’ve been given an incredible gift to where I can wake up every morning excited to start the day. If I didn’t have the ability to make art I’d be a completely different person. It’s what drives me. There have been a number of people along the way who’ve helped me to get here, of course. I didn’t get here on my own but it takes a lot to turn all that help and support into something. The thought of letting all those people down was also inspiration to make it all work. 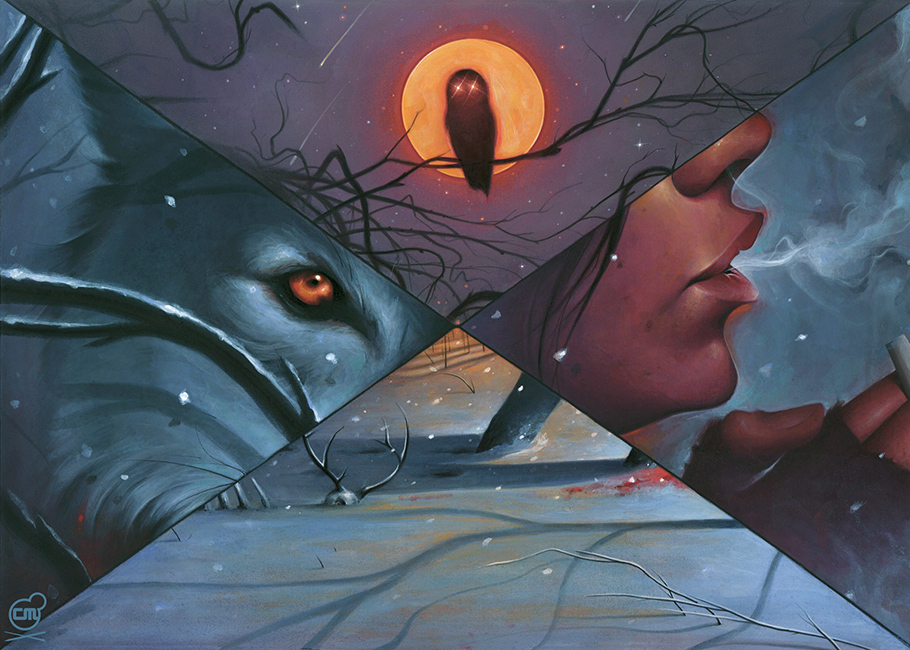 What would you class as the highlight of your artistic career so far?

That’s a tough one, man. I don’t think I’m really ready to answer that yet. I love getting emails from up and coming artists seeking advice or guidance. I always answer those emails and sometimes I have them call me so we can discuss over the phone. I remember being in their shoes, so it’s important I shed some light. Maybe there’s some teaching in my future who knows. Oh, and I bought a house with my wife, very proud of that!

When you’re not making art, what do you like to do to relax?

Normal stuff – listen to music, explore the city with my wife and our dog Chunk, shoot hoops, drink beers, eat. Love to travel too, even if it’s an hour away to somewhere we’ve never been. Just seeing new things and talking to random folks helps feed the soul. Good music, good people, good drinks and food, there’s really nothing better. I bought a record player recently, hoping to get a nice vinyl collection started! 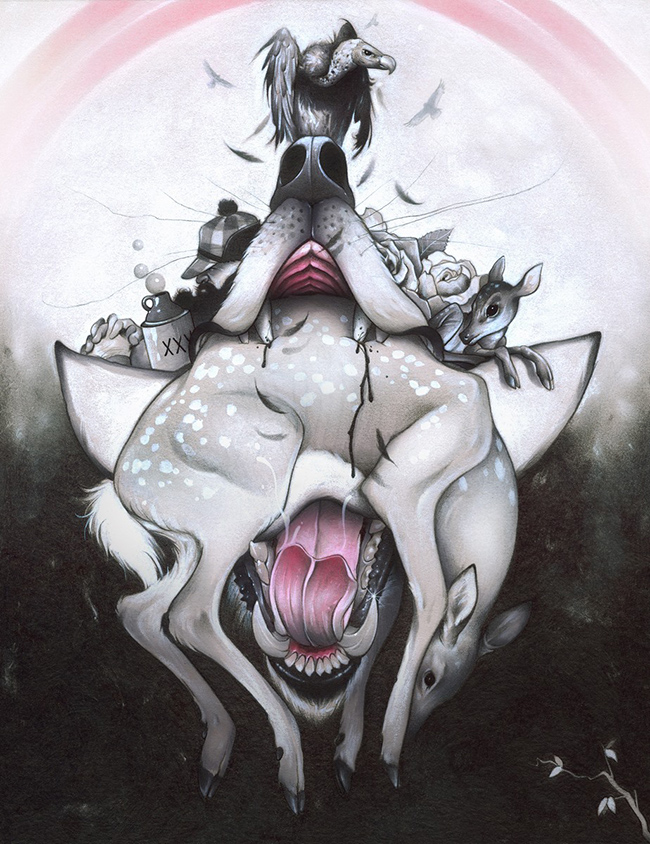 That’s tough. It would have to be a Norman Rockwell. I love that man, Jesus. What a genius. I’d say him and a number of graffiti artists were my biggest influences over the years. A James Jean, Jeff Soto or Craola wouldn’t be a bad addition either. Mark Ryden, 123Klan, Kaws, Nathan Ota. Man, I could go on for days.

Why do you believe art is important to the world?

Its necessary man it just is. It brings light to the dark. It makes people happy. It makes me and the people around me happy so I’ll keep making it for that reason alone.

What’s next for Chris B. Murray?

Hopefully a lot more clients and larger scaled works. Hoping to do more murals in the future. Big shit, so people have to see me. 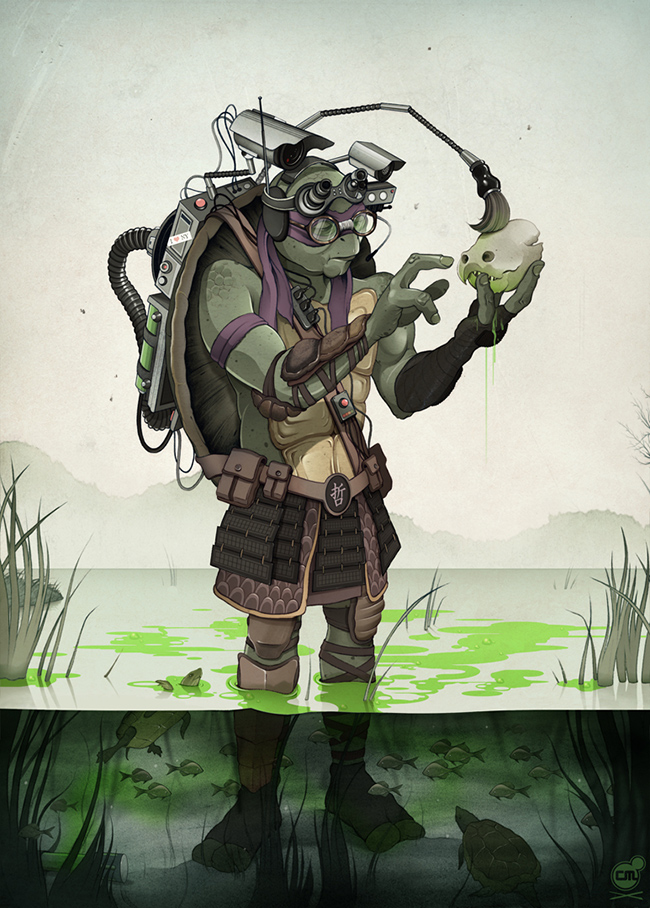 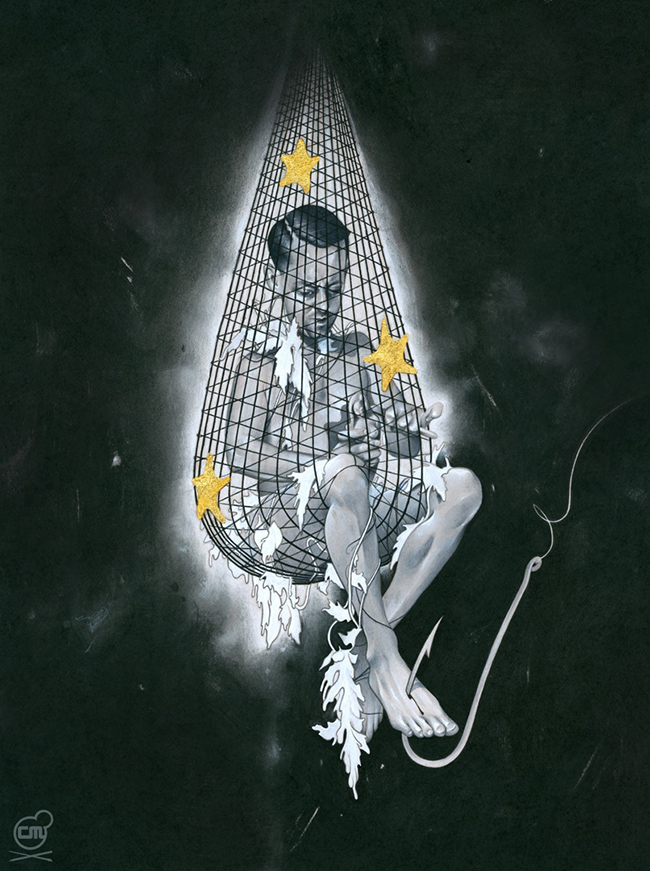 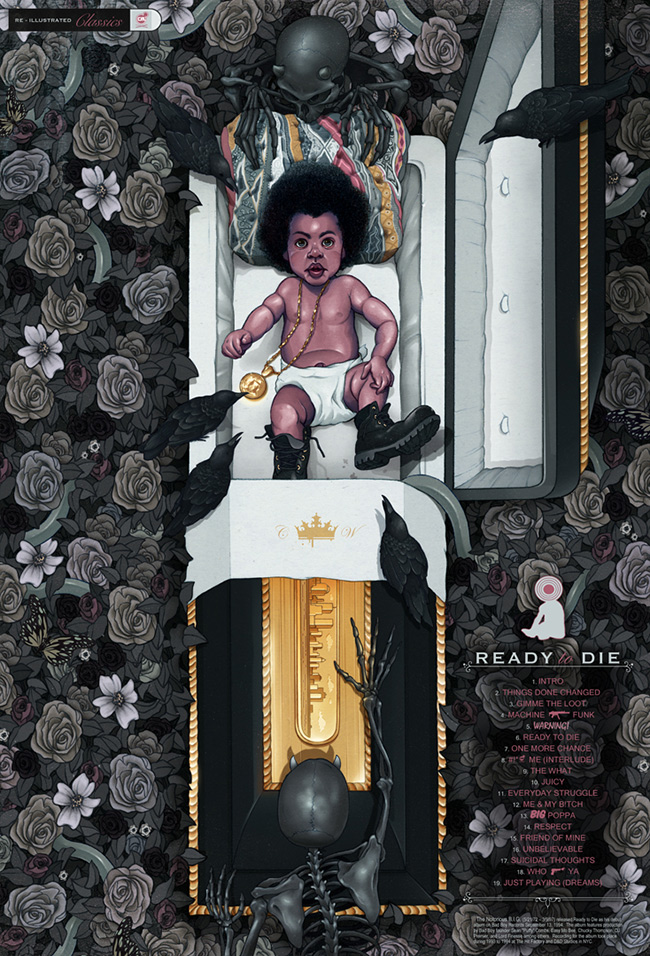 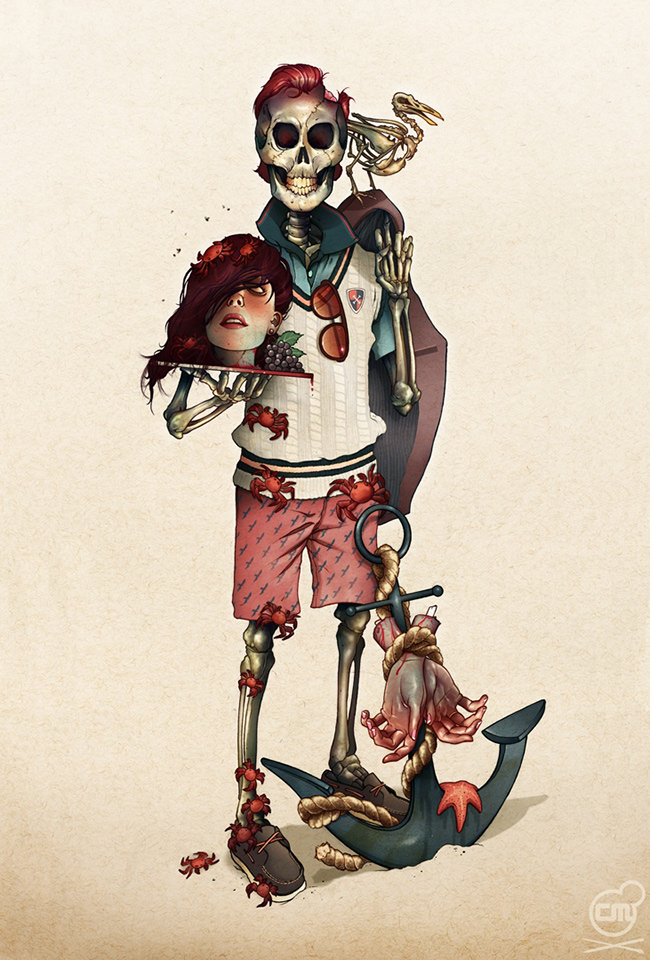