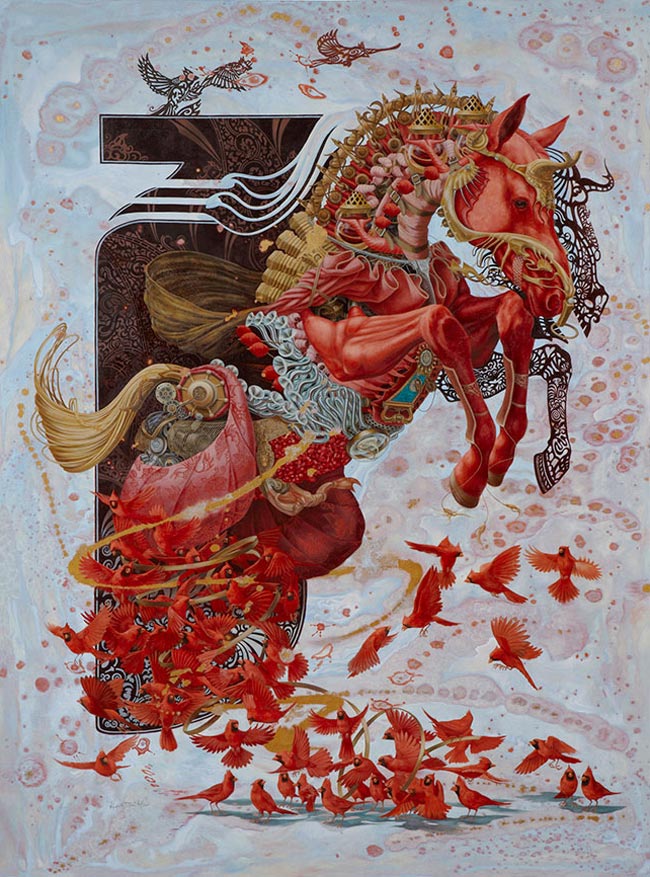 The artwork of Heidi Taillefer explores age old philosophical questions concerning the human condition and our relationships with technology; concepts which have never been so relevant, given our current scientific advancements. Delivering a truly contemporary spin on classic iconography, Taillefer burrows into her subject matter through a visual language which has been built upon the solid foundations of the early surrealists, classical figurative painting and contemporary realism. Addressing humanity as a whole, Heidi borrows from symbolic imagery within worldwide mythological history and fuses it with mechanical motifs to create a fascinating synthesis which unites her interests, hopes and concerns about; our impact on the natural environment as well as on our own societies; the relationships between the artificial enhancement of the body and daily life; and the primitive fundamentals of our human character.

Heidi Taillefer lives and works in Montreal, Quebec. While pursuing a degree in Humanistic studies at McGill University, Heidi studied classics, which continues to inform her work to this day. She has been exhibiting her art for over two decades within both gallery and museum venues. Her work has been collected internationally and resides in prestigious collections including the private collection of film director Morgan Spurlock and the McAllen International Museum of Art and Science.

WOW x WOW recently grabbed the opportunity to ask Heidi some searching questions about what informs her creative practice. We also had the chance to dig deeper into the subjects which currently inspire her marvellous creations. Read on! 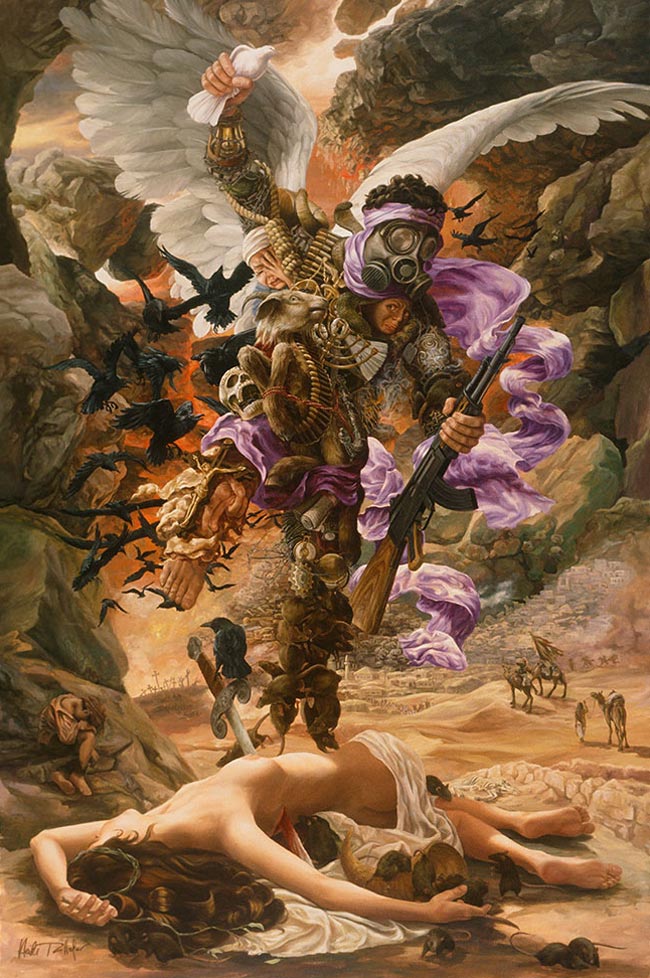 Hey Heidi! First of all, thanks for agreeing to free up some of your valuable time in order to have this wee chat, we really appreciate it. To get the ball rolling, we’re interested to hear about where you’re currently living and what you like about the area? Do you feel part of an artist’s community there and is that something that is important to you?

I live in Mile End in a great big huge commercial building with a bunch of other artists and creative types. The neighbourhood is amazingly vibrant and everything is within walking distance, so there’s a real village-y feel to the place. It’s been gentrified by now (I’ve been here for 10 years) so there’s also an upscale and very developed feel to it, which is good and bad, good because I like the upscale part but bad because I also like hidden treasures nobody knows about which is still waiting to be discovered. 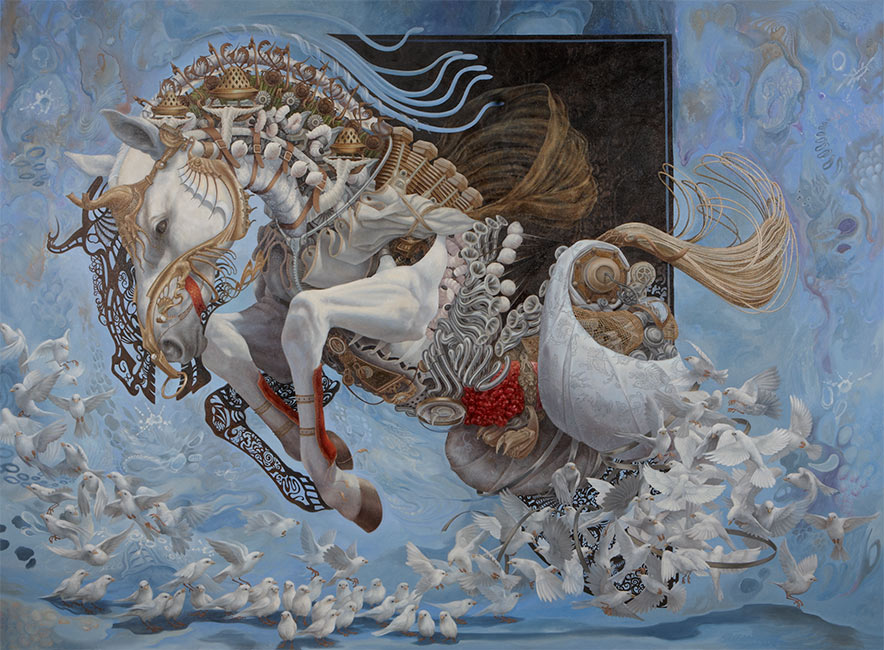 How much research do you do before starting a new piece? Can you tell us about your creative process?

It depends on the piece… sometimes my work is based more on an aesthetic, whereas sometimes it’s based on a concept I’m trying to express. I can often do a lot of reading before setting out on a piece, especially on symbolism, and I used to scour magazines for image references to use whereas now I use the internet. I usually start with a basic structure like a shape or subject, and work symbolic elements into that, and other times I kind of brainstorm the whole thing in one shot to get a very chaotic sense of what I want to put down in a drawing. I can then write ideas down or sketch them out bit by bit. I’m a bit lazy with sketching however, so I tend to write them down and then complete a fully detailed drawing after. 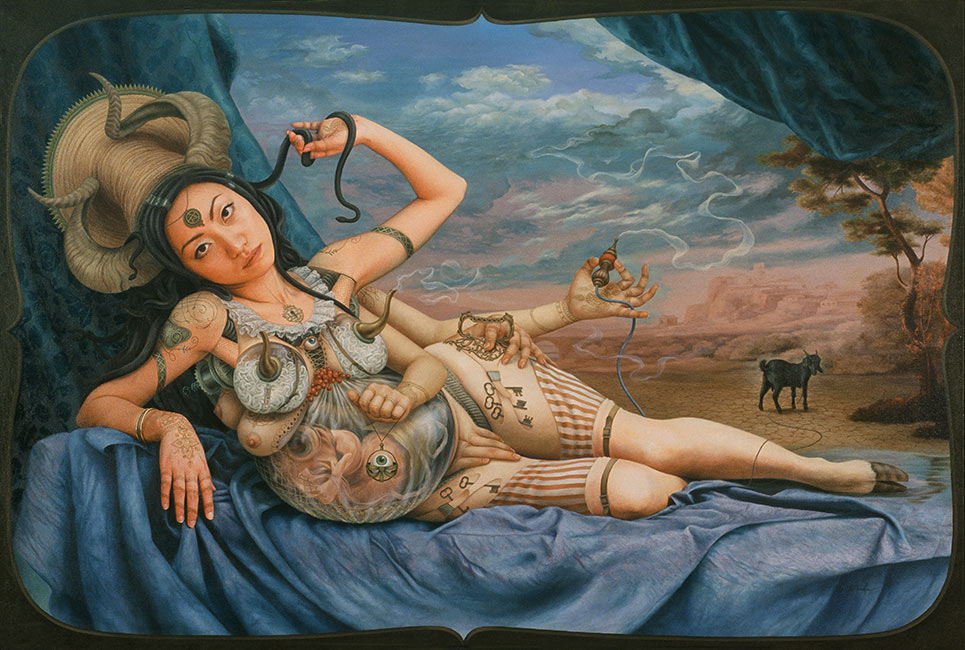 Many of your works ask philosophical questions about life and the human condition. What kind of realisations or moments of clarity have you been granted by living with these thoughts and questions during the creation of your images? Would you be willing to share one or two memorable moments?

I distinctly remember one painting I was working on where I was furious at a guy I had been dating because he was acting like a jerk. The thing is, he had Asperger’s and wasn’t always aware of the impact of his actions, so I never knew when he was being a jerk or if he was innocently acting out of ignorance. In my anger I drew a picture of a woman holding a small beastly creature at her feet by a leash, which I meant as him and I, but as I worked on the piece and thought about his condition I began to resist my intention to lash out at him visually. This created a kind of resistance that lead to a transformative understanding, one of unconditional love, which I incorporated into the painting instead of anger. That’s actually a Kabbalistic principle, resisting a negative reaction to being in the light so to speak, which I also painted separately on another occasion. And another time, while dating this guy, I wanted to lash out and paint snarling wolves, which turned into a painting about the ravages of prejudice. 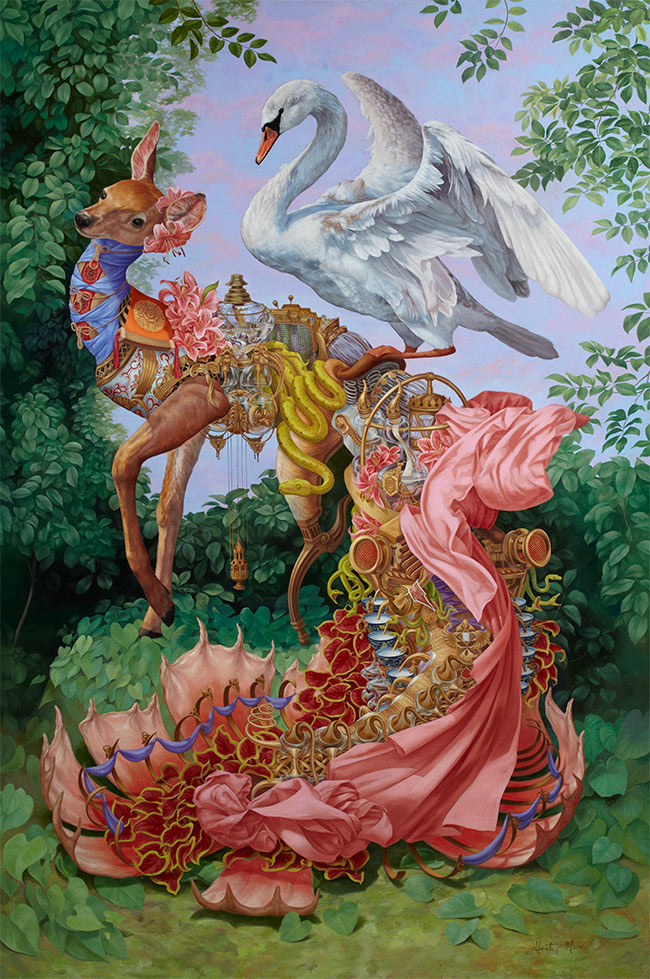 The ever complex relationship between living organisms and the machine serves as one of your most important influences. What are some of your current thoughts about the advancement of technology and where humanity and the rest of the animal kingdom might be heading as a consequence?

I’m really interested in a new gene editing program called CRISPR, which uses molecular ‘scissors’ to clip out faulty snippets of DNA and can apparently replace them with good ones. It promises to steer the evolution of plants and animals in a whole new direction, though it’s scary to think of the trickle down impact it could have on the development of a person once it’s applied to humans, which is done in embryonic form so that no faulty genes are passed onto later generations. Since it can be applied to anything from viruses to insects all the way up to us, it can nullify diseases, or if it were to get into the wrong hands, become a weapon of mass destruction and create devastating super bugs that could wreak havoc throughout the population. And there’s the concern that many conditions or ‘kinks’ have some kind of evolutionary advantage, and to interfere with that could be like opening Pandora’s box. 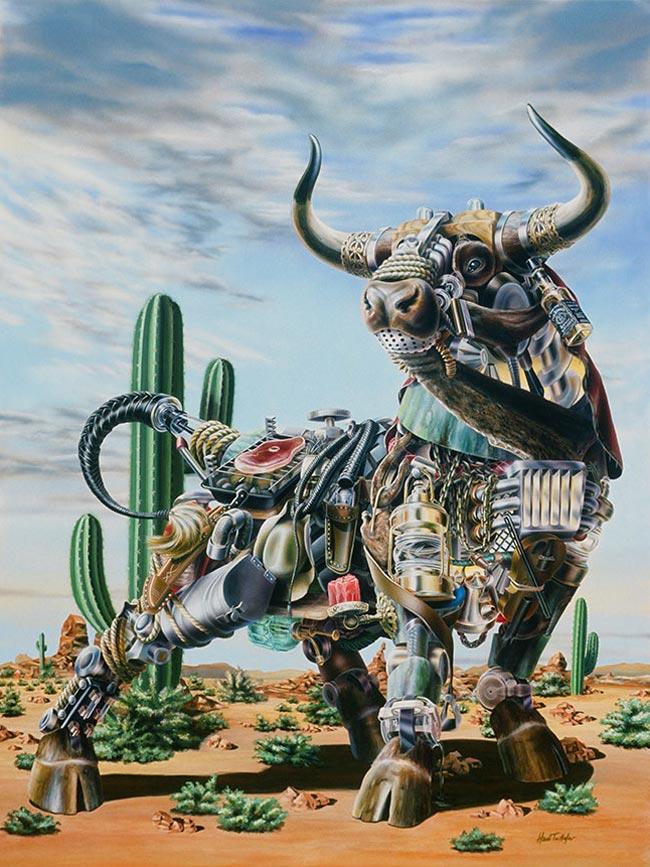 You have a deep interest and fascination with the mystery of consciousness, one of the most written about and debated subject in humanity’s history. We would love to hear what your thoughts are on the subject and if you believe that strong AI is truly achievable?

Right now I’m interested in reading up on near death experiences, which all seem to be so similar though they are still also quite unique to the individual. Some argue that it’s because the brain gets flooded with DMT at the moment of death, which leads to this kind of hallucinogenic experience, but I wonder how so many near-death accounts are so similar whereas a drug trip on DMT does not produce nearly identical hallucinations in our waking life. Consciousness does not seem to be produced by the brain (at least, nobody can find which region of the brain creates it), but is rather registered by it, which would account for all sorts of para-psychological phenomena such as ESP, which doesn’t require a direct transfer of information from one brain to the other. If this is the case then a strong AI, which includes consciousness is not achievable of course, which I don’t believe it is. 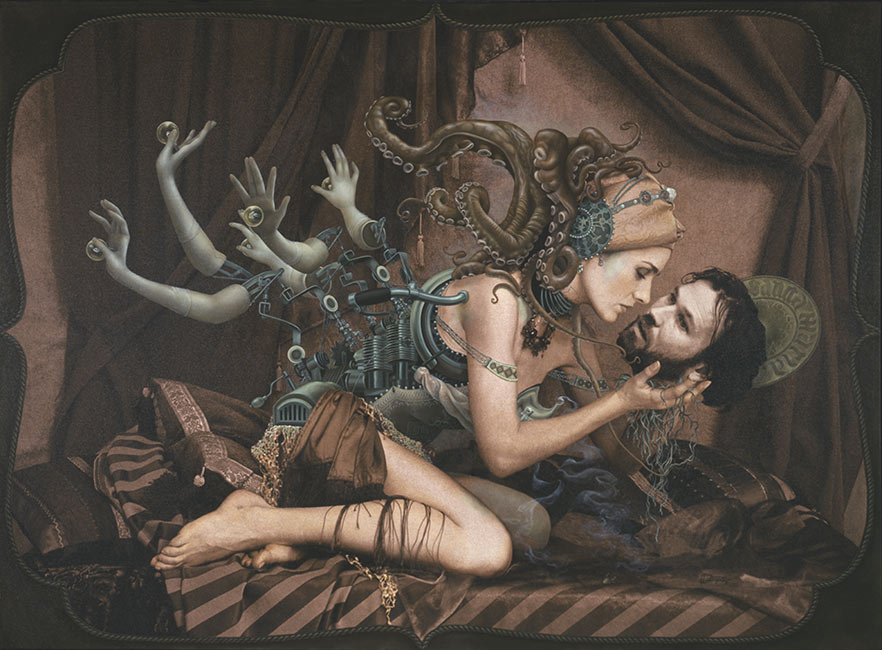 You have been exhibiting your paintings for over twenty years. How have you seen your art evolve during this period and in what ways do you feel that your practice has improved?

My work was once very ‘robotic’ and done in watercolour, without any background. Since then it’s evolved into something much more symbolic, and has become richer in colour as I went from watercolour, to acrylics, to oils. It’s much more colourful now as well, and I would say that as an improvement it is more simplified, though it’s not always so much of an improvement as merely a change. 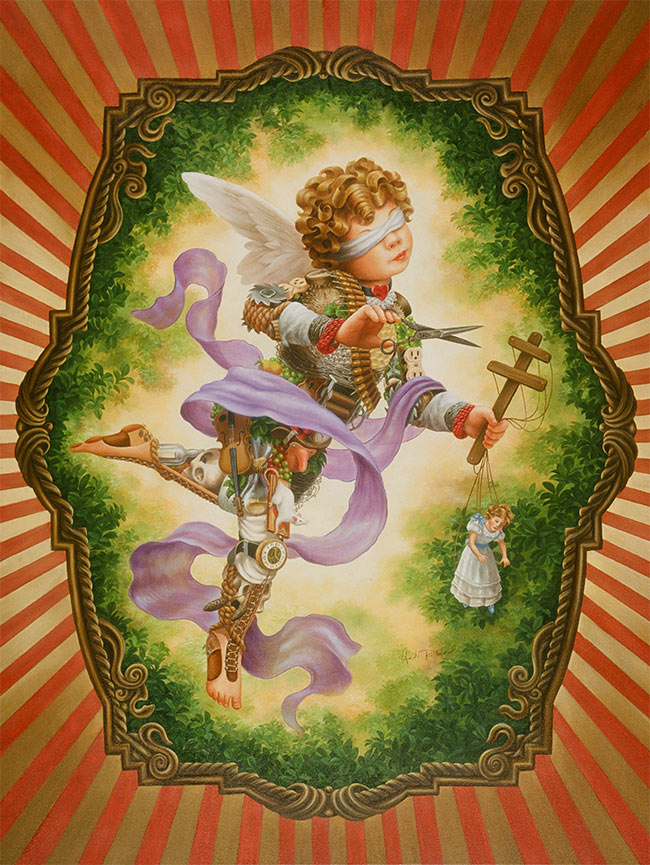 What are your opinions about beauty in reference to man-made artefacts? Is beauty something that you search for in art and is it something you consider when producing your own work?

I think aesthetics in art are important, in large part because they fill the gap between the artist and the audience. It’s much easier to relate to an object of beauty than to relate to a bunch of textures or shapes or colours that have been heaped onto canvas or in a pile to convey a concept. Beauty may be more simplistic because it’s so much easier to access, but I love it and try to incorporate it into my work. But it’s also very relative, there is a kind of beauty in that which looks decrepit, and I used to be quite interested in that, but now I seek out a fresh and colourful approach to beauty while maintaining my own standard of it, in case it’s occasionally interpreted as strange. 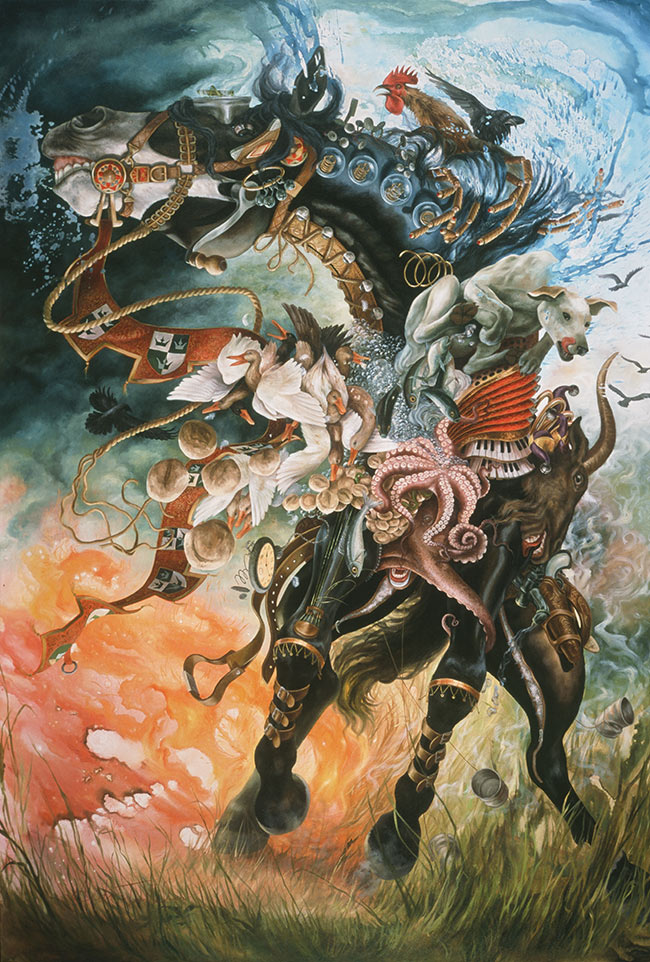 Are there any particular artists in the scene today who you feel a kinship with? Be it through philosophy, visual aesthetic, exploration of themes, etc.?

I’m not that connected to what others are doing and my own discoveries in visuals or philosophy are quite personal, so I feel like I live in a vacuum somewhat, apart from being surrounded by artists in the building where I live.

I’d say broken or difficult relationships were always my greatest source of inspiration, as clichéd as that might sound. I went through a number of difficult breakups over the years and I think my sensitivity to them had to do with childhood associations and experiences as well, and love has often found its way into my work over the years. 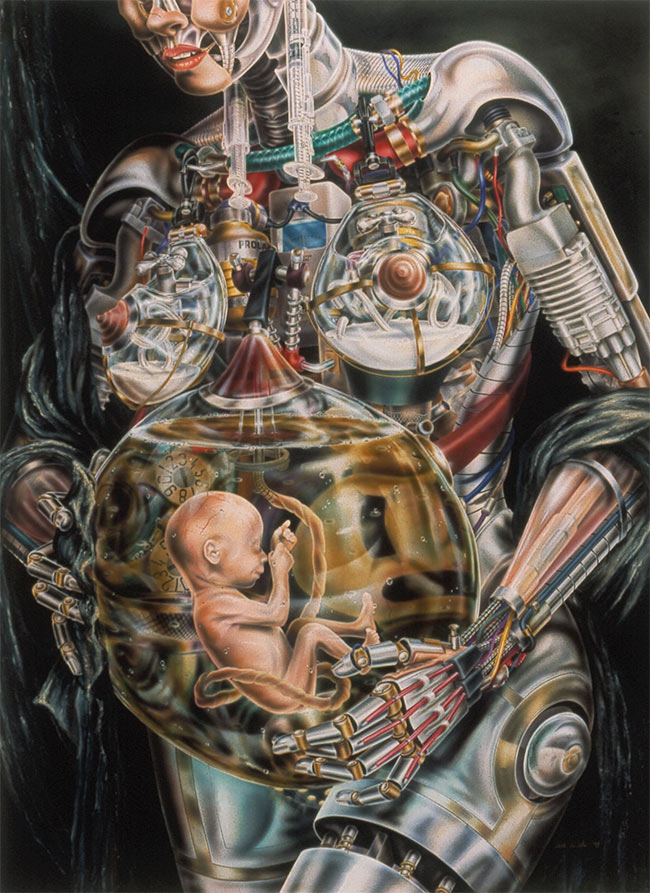 What’s next for Heidi Taillefer?

That’s a good question, because right now I feel that I need a break of some kind, to refresh my ideas and gather inspiration. It’s a dilemma because I don’t know what to do with myself if I’m not painting, but right now I’m not that interested in it and was considering applying my talents to something more practical like digital matte painting. Before illustration died out I used to combine painting with illustration and I really enjoyed juggling the two, one would provide a break from the other, so I’m hoping to find a similar dynamic with digital art. 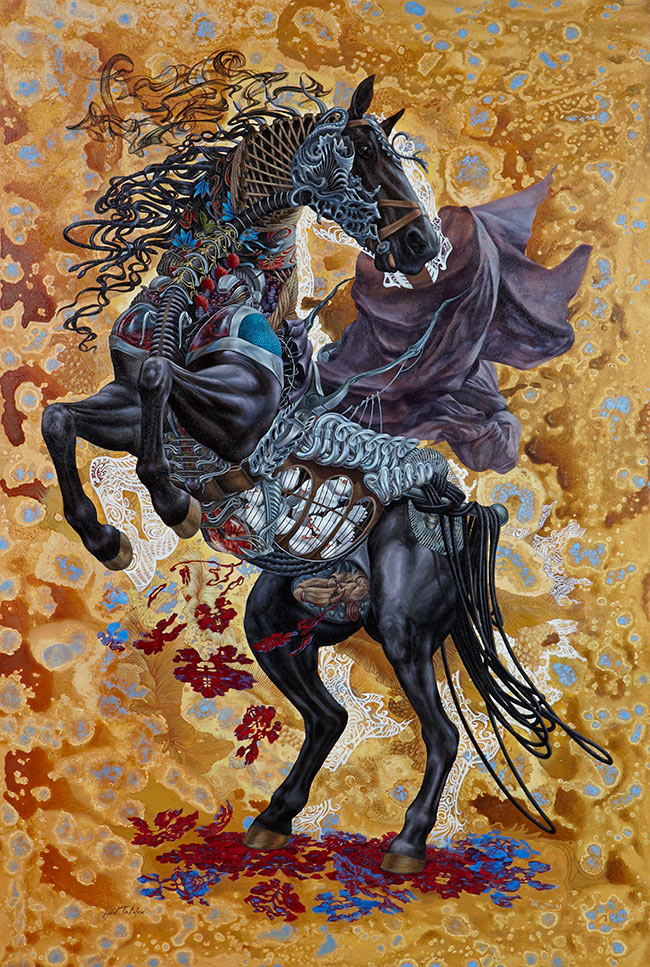 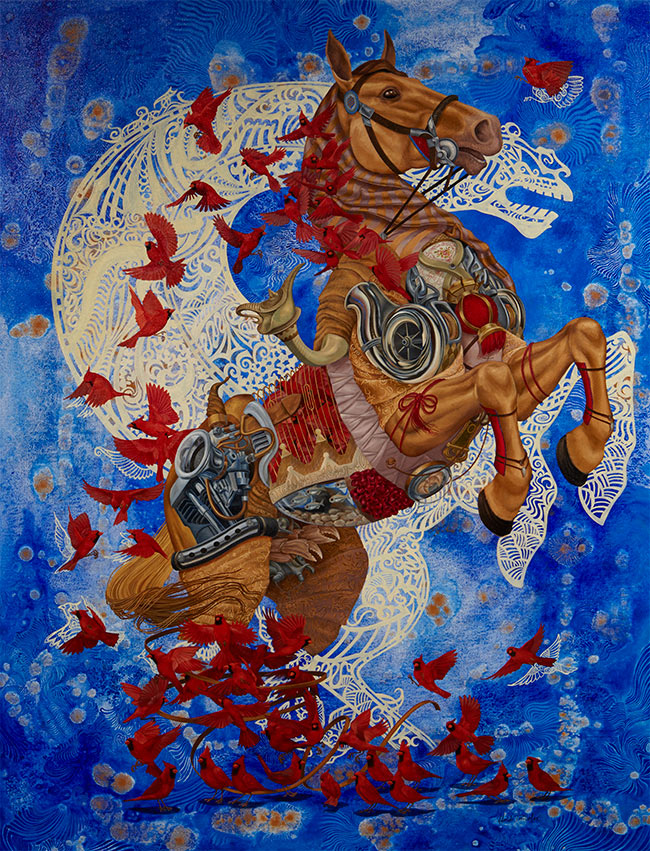 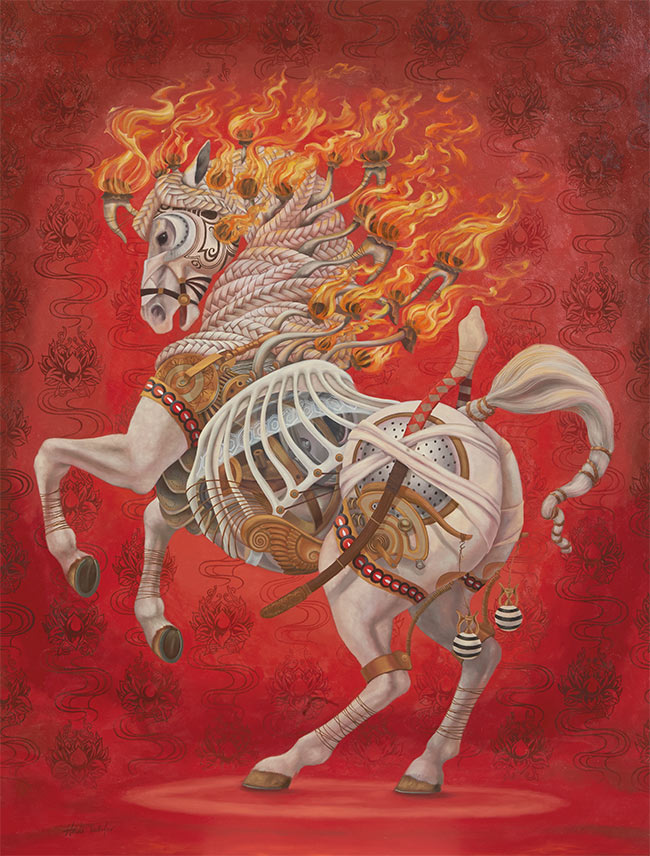 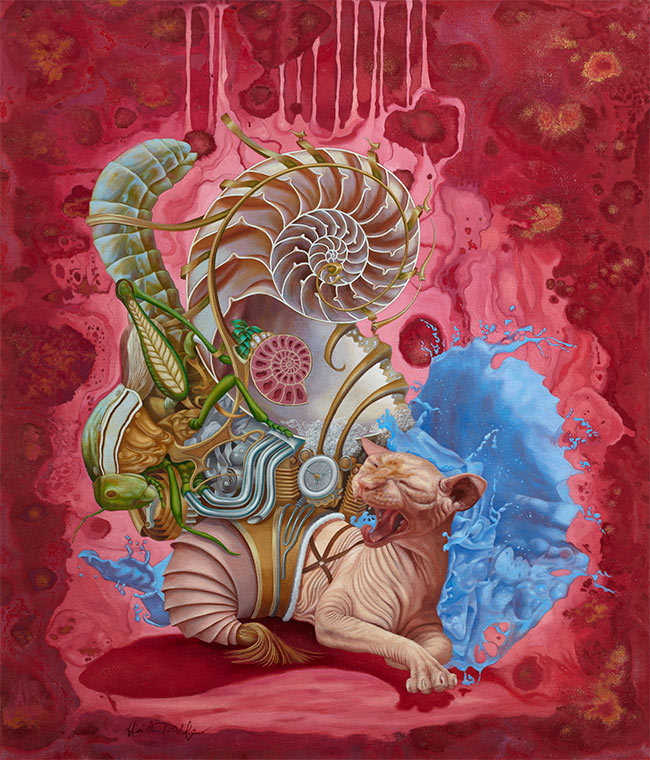 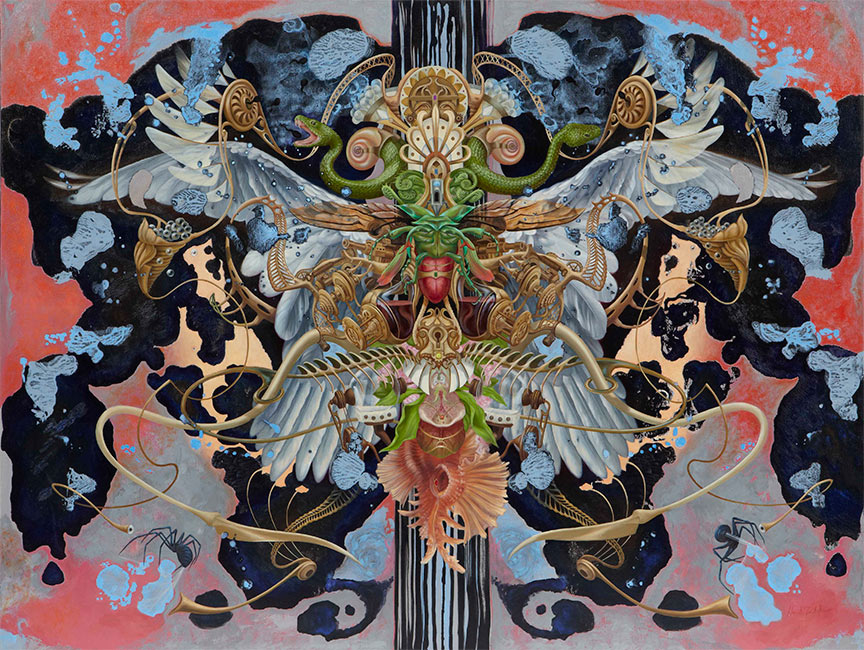 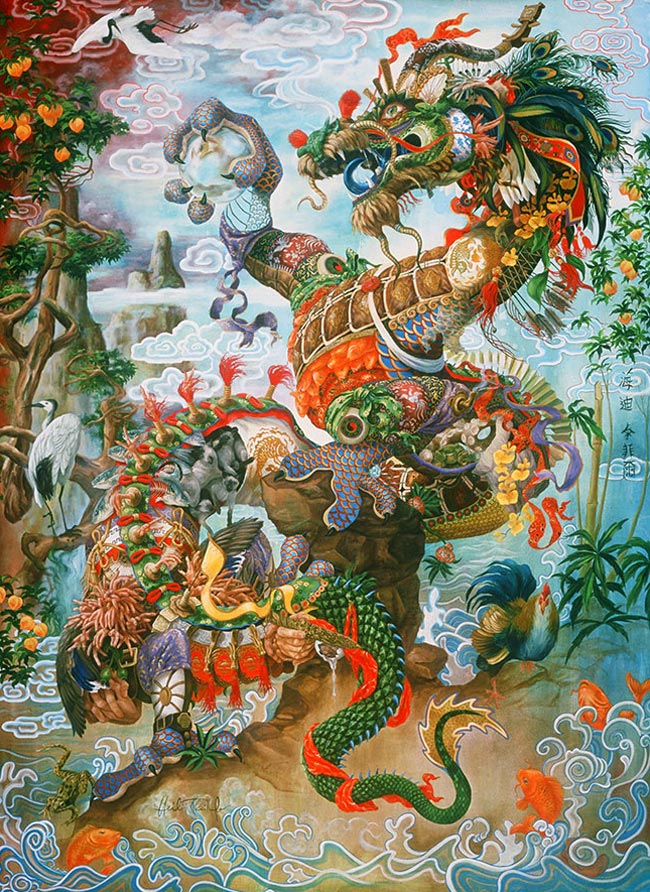 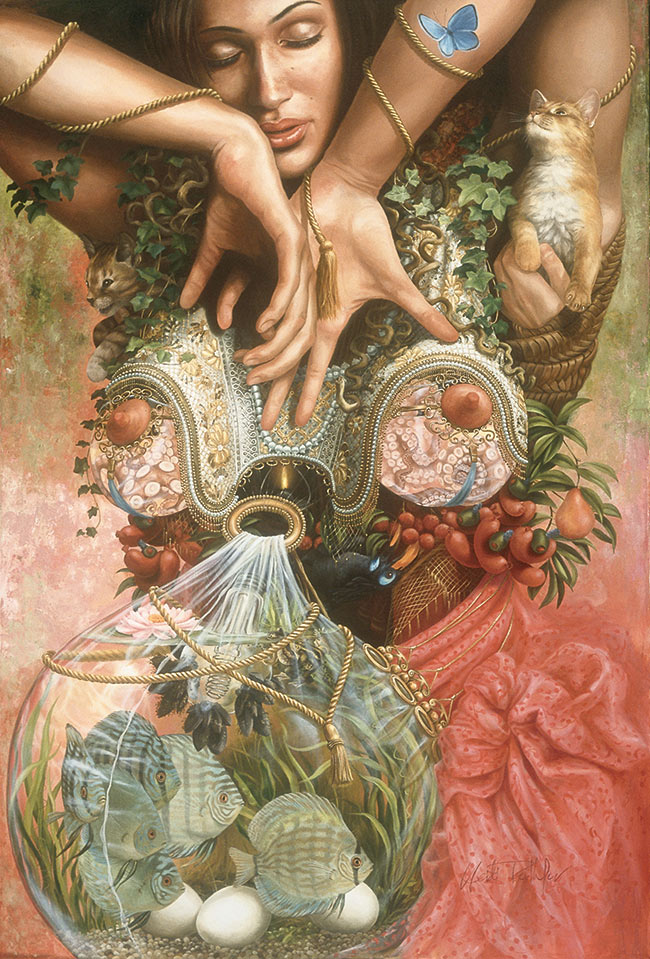 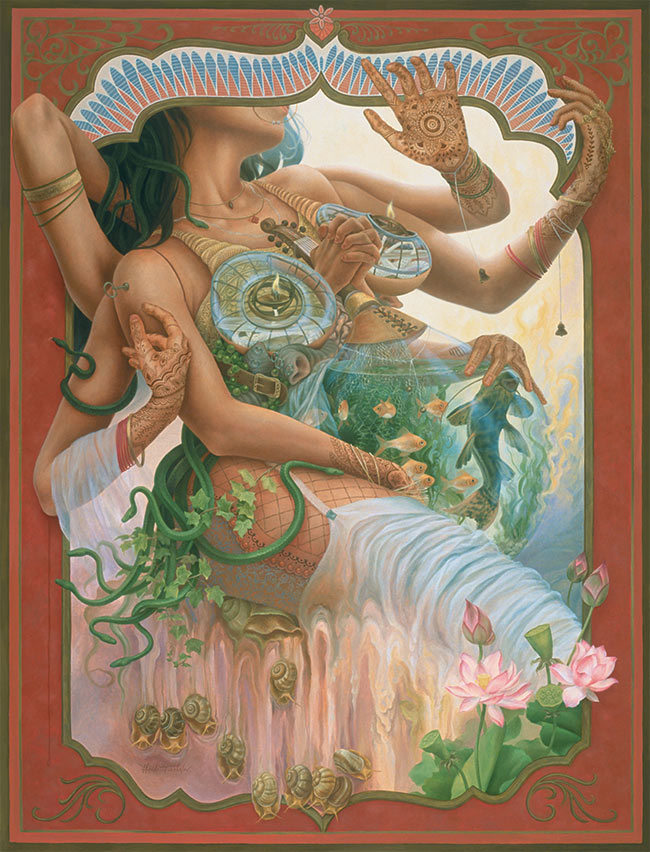 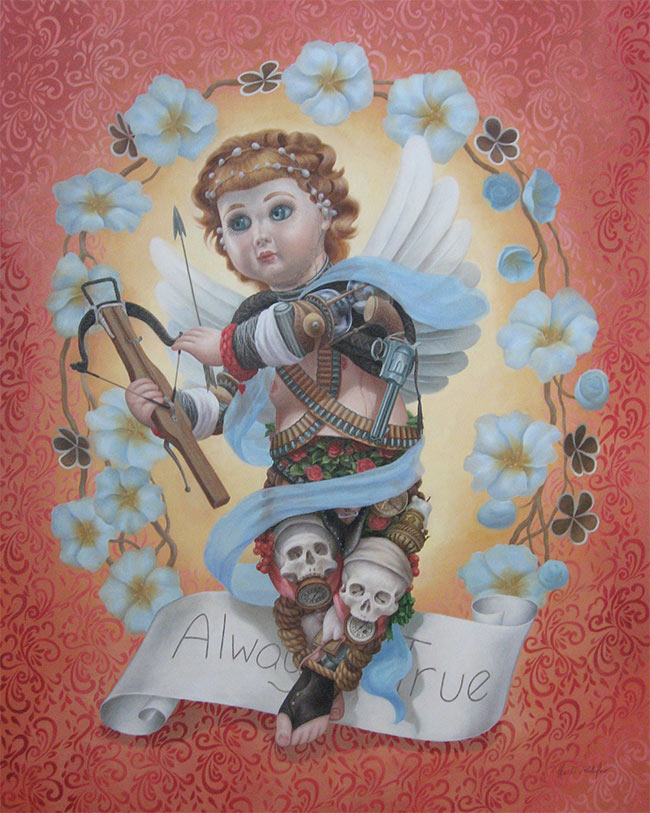 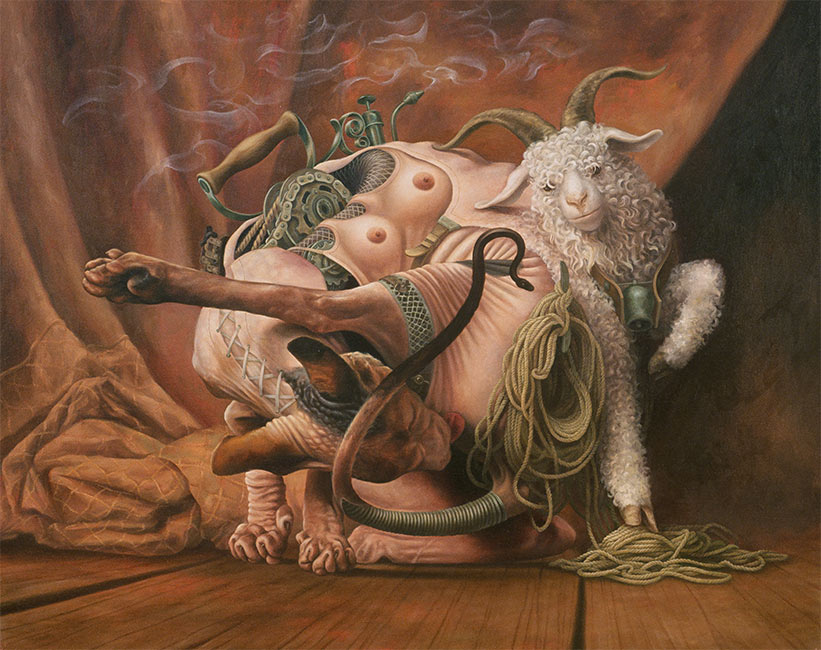 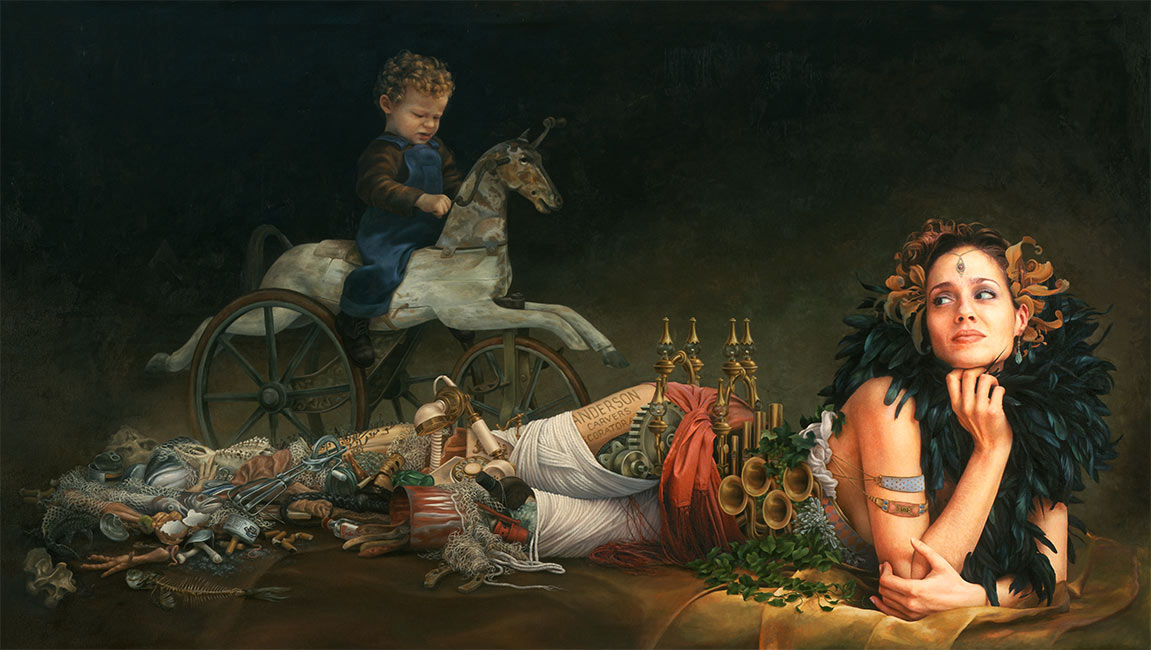 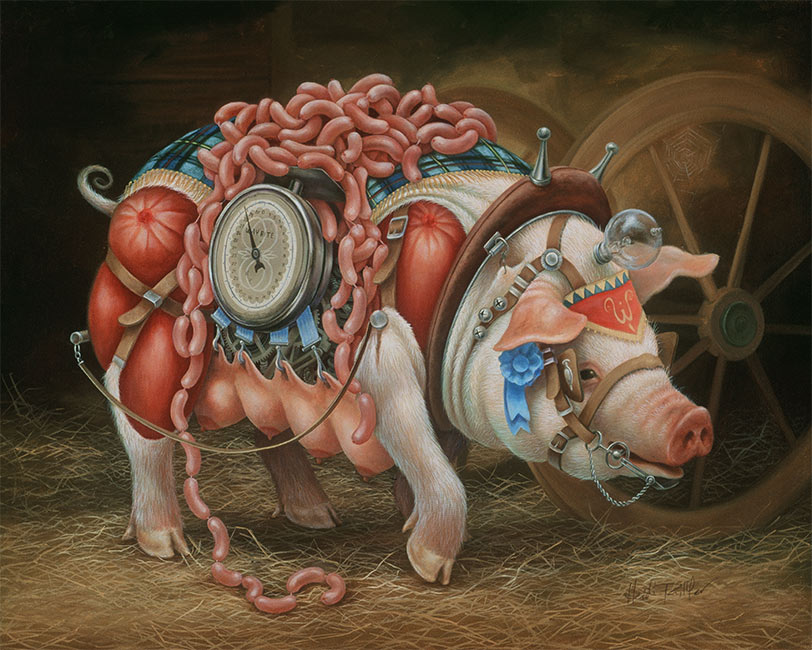 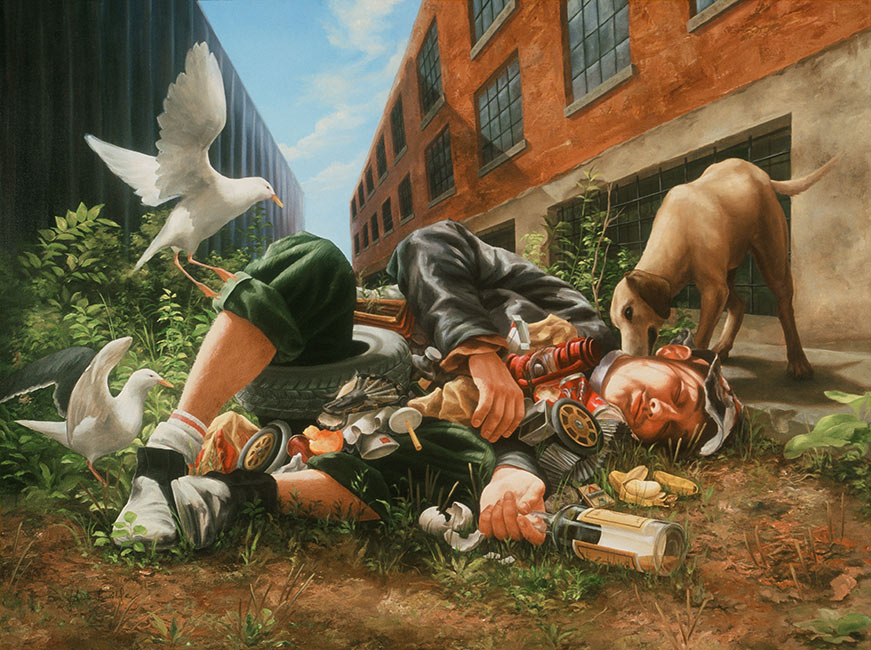 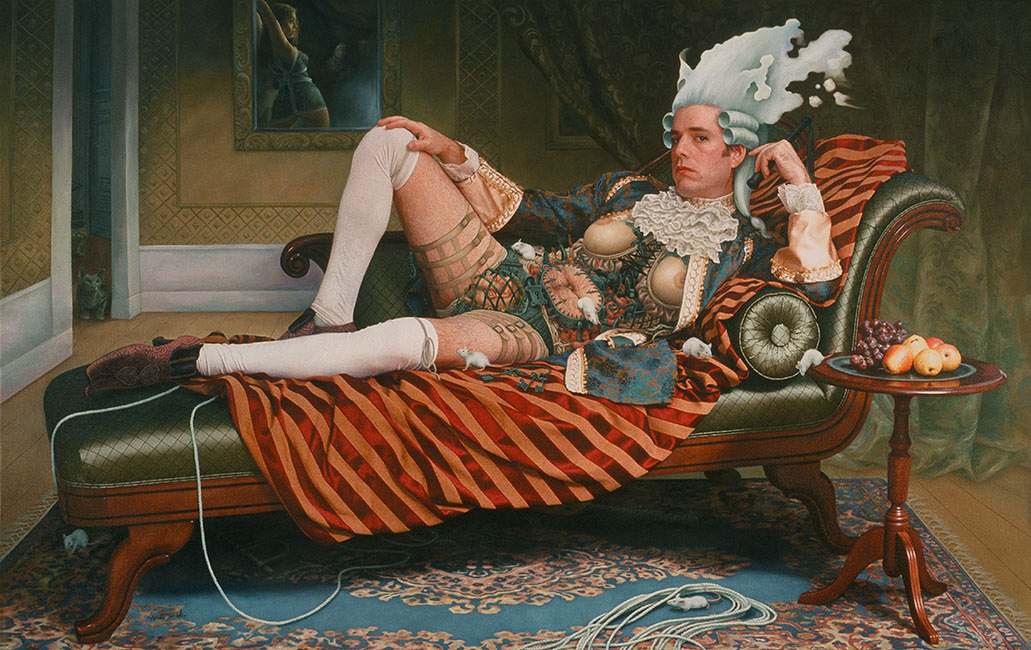 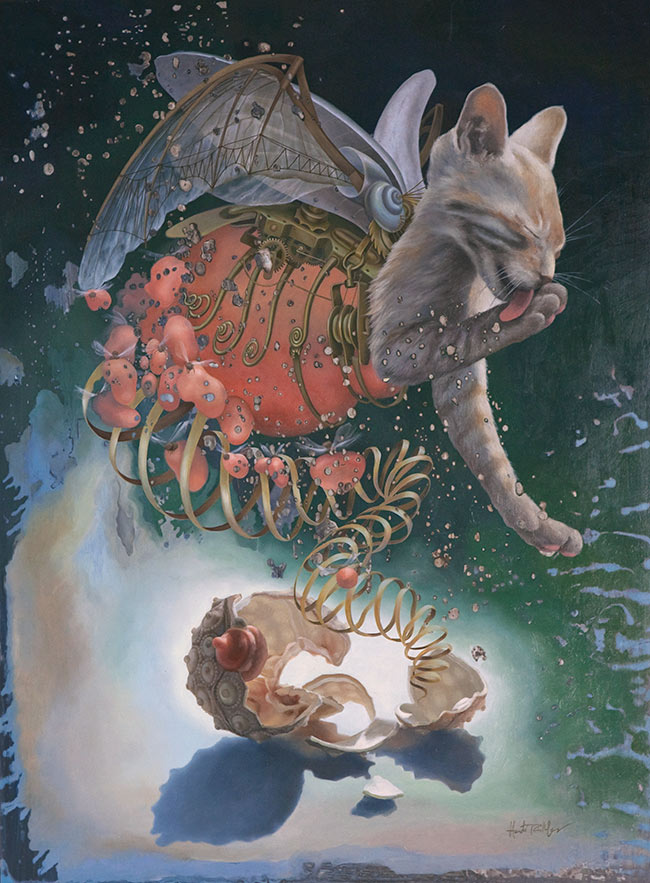