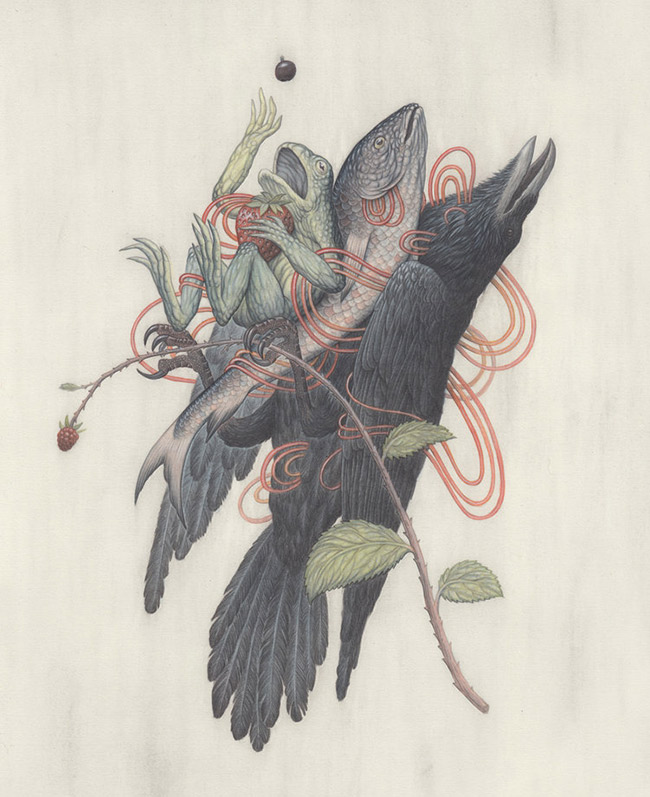 Nick Sheehy listens carefully to the distant vibrations of memories and inspirations projected forth from his youth and childhood imagination. His work emanates from a source very far removed from the ofttimes overly pretentious, concept driven offerings of the contemporary fine art world. Deliberately taking a step back from deep analysis and over-thinking, Sheehy’s creative methods rely heavily on the natural and often unconscious ruminations that occur during the all consuming act of creation itself. Incorporating uncomplicated autobiographical references into the fantastical surreality of his intriguing animal characters, Nick presents scenarios of inherent mystery which speak to us on a subconscious level and have us engaging in primal dialogues capable of reaching deeper into our complex psyches than we are consciously aware.

Nick Sheehy is an Australian artist and illustrator who was born and raised in Tasmania and is currently living in London. He received his formal training at the University of Tasmania, where he majored in sculpture. In recent years, Nick’s unique drawings have become much sought after by galleries and collectors alike. He regularly exhibits his art around the world and has worked as an illustrator for commercial clients such as Nickelodeon.

WOW x WOW seized a recent opportunity to chat with Nick and enquire into his personal history, along with his creative inspirations and motivations, in a general attempt to learn more about what drives this fascinating artist. 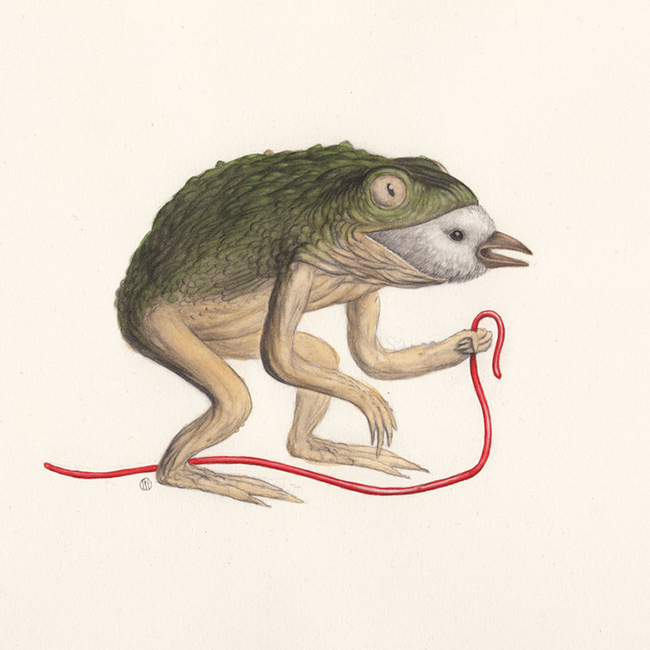 Hi Nick! First of all, thanks for agreeing to free up some of your valuable time in order to have this wee chat, we really appreciate it. If you could please start us off by introducing yourself and talking about your background, touching on anything you feel has been relevant to shaping Nick Sheehy the artist?

My name is Nick Sheehy. I was born and raised in Tasmania by a couple of hippies and have been lucky to come from a relatively-unconventional and creative family. I’ve always loved drawing but never felt comfortable about my space in the creative world. I went to art school, where I majored in sculpture and lost interest in art. A few years later I got back into drawing and have kept fairly busy since. I’m not entirely sure what I’m doing. 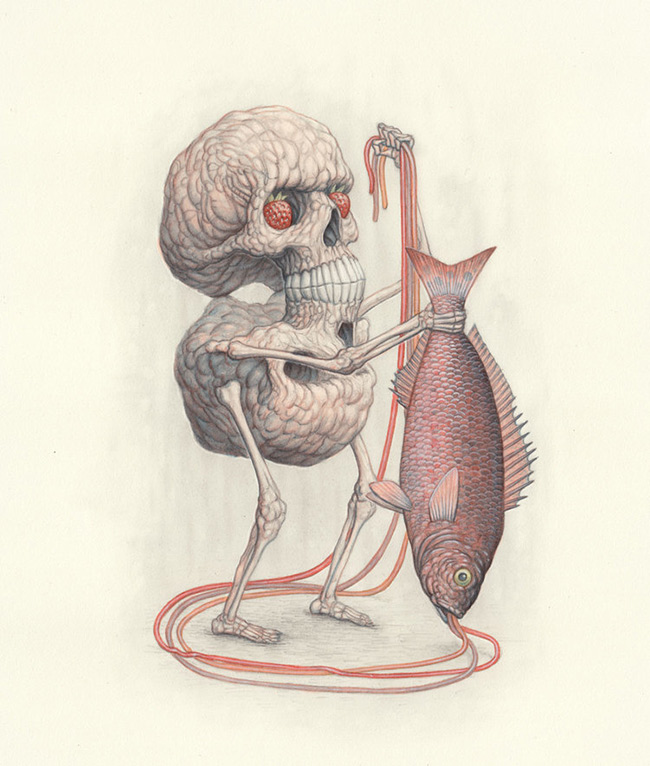 I moved back into London 3 years ago and have just left busy Shoreditch for a more relaxed Mile End, where I now live with my lovely girlfriend. It’s far greener and quieter, with more parks and canals. An ideal place for walking and exploring.

I’ve never really felt connected to the art scene of any area and am yet to build any connections in Mile End. But the older I get, the more I like the idea of contributing to a community. I’m yet to figure out what shape those contributions may take. 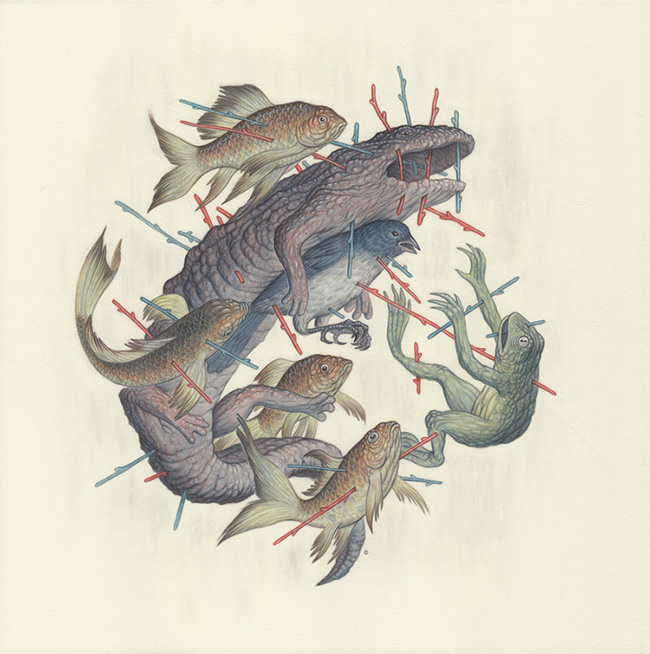 My parents split up and both parties decided to depart the city for a more self-sufficient, off-grid lifestyle in the country. From an early age I was surrounded by flora and fauna, quiet, fresh air, and a certain level of isolation. Due to the limitations of solar power during the 80’s and 90’s, TV was rationed in the household. Drawing and a semi decent imagination were good skills to have.

My mum, with her composer partner, bought a plot of land on the side of a small mountain which was slowly rejuvenating after being logged. Using the materials around them, they built a crazy house out of rock, mud and logs and started becoming very active in environmental protection, focusing on ornithology, self-publication and photography. Mum always wanted me to pursue arts and jokingly said that she would disown me if I ever became an accountant.

Meanwhile, my father and his teacher/artist partner, built a more conventional house. My father worked as an artist and a technician at the art school, where his interest in art faded through his involvement in art education and going to one-too-many boring art shows, which I got dragged along to. Often I was shorter than the plinths. Every now and then I am haunted by my dad’s jadedness and scepticism in arty nonsense. 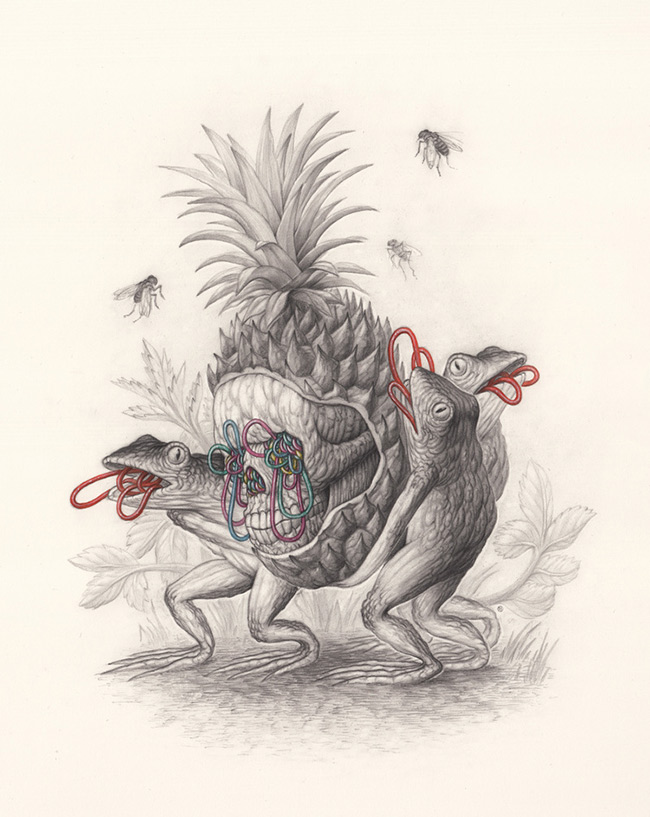 Do you remember the first piece of art you ever sold? How did the sale come about and how did it make you feel?

I think it was a pastel drawing of a fairly crazy, Brett Whiteley inspired character from my college days. The work was on display at an end-of-year exhibition. I don’t remember how I felt. Probably very happy; I love selling work. 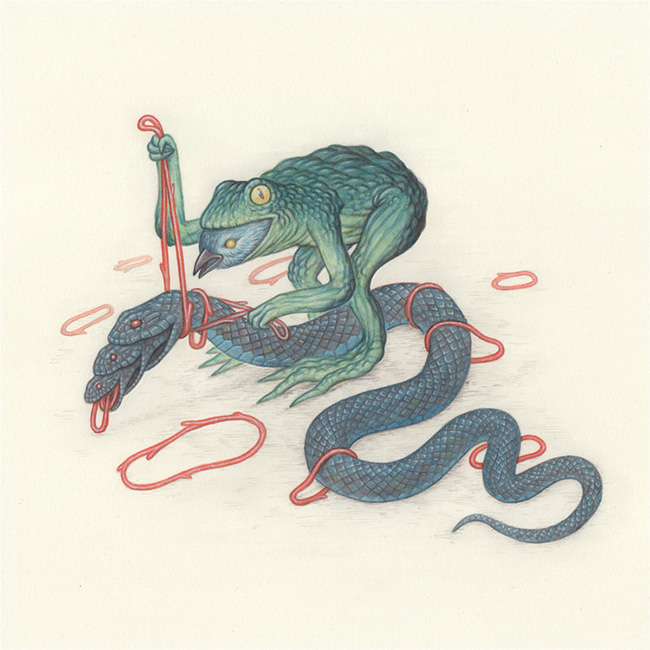 From what we know about you, it appears that you put a lot of trust in your subconscious when it comes to making creative choices and that you try your hardest not to overthink your work. Would you say that is an accurate statement? If not feel free to correct it, if so, could you talk to us about how you encourage ideas to rise to the surface?

Yeah, that’s accurate. From experience, forcing or over-thinking ideas is a recipe for a fairly uninspiring and literal piece. Also my technique is labour intensive and tedious, so not knowing exactly what’s going on or where you’re heading keeps the journey fresh and enjoyable. Usually the best pieces are the ones that I’m not sure if I should abandon or not.

I’ve always enjoyed seeing each piece as a stepping stone to the next piece. I think the best ideas arrive by accident. As long as you give your brain new food to digest – either by watching a film, looking at some architecture, learning to draw new things, listening to new music, etc. – then something decent will arrive.

Or, sometimes the best idea is to ignore new ideas (at the risk of sounding a bit Eno). After making a lot of work for exhibitions, I’m starting to think that getting too bogged down in ideas is counter-productive. Just make work. 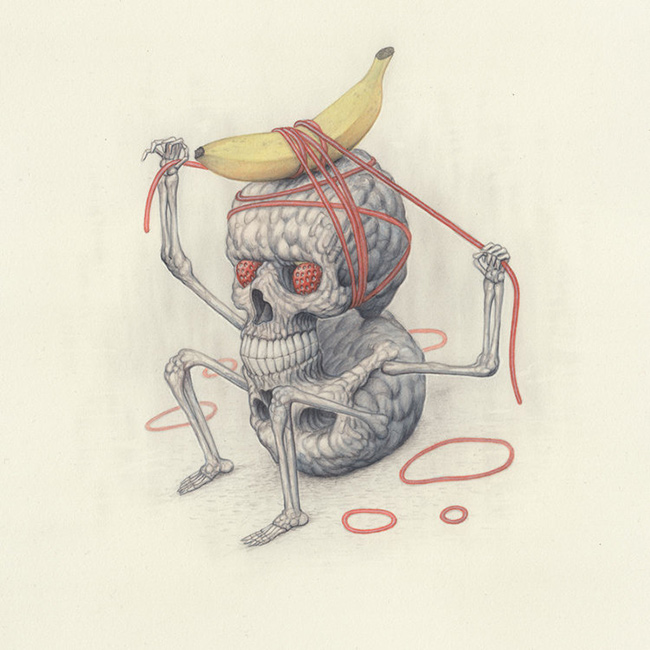 Do you think of your work as containing symbolism? What sort of personal meaning do you assign to the recurring characters and objects in your work?

It definitely has some system of symbolism, with the meaning of certain motifs evolving over time. Often the work is autobiographical. Sometimes vague, sometimes very specific. But I don’t find it helpful to explain specifics. X won’t always equal Y.

Have there ever been occasions when images you’ve created have revealed something to you after their completion; something that maybe you hadn’t been consciously thinking about while making them? If so we’d love to hear about one such occasion.

It happens, often on a smaller scale. I draw more birds in spring or when I’m happier, or more skeletons in winter or when less happy. Stuff like that. I can’t remember one particular occasion. 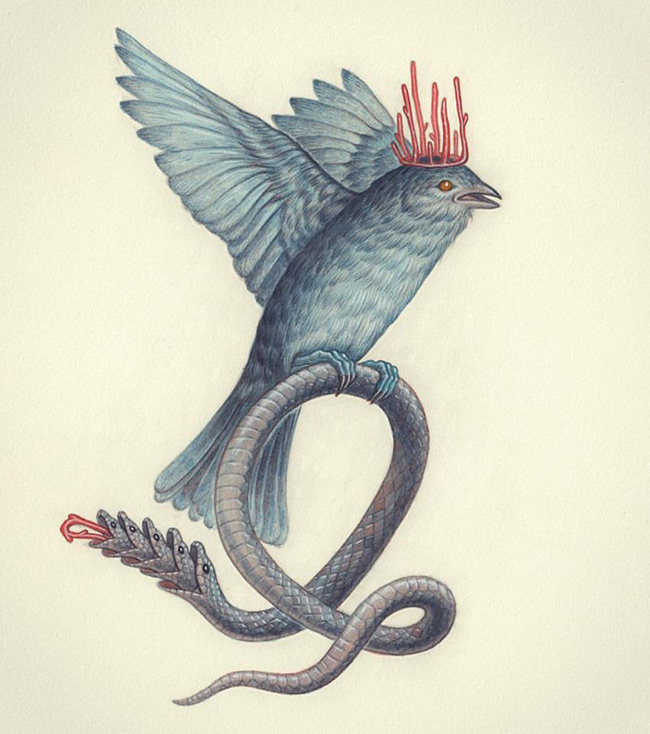 The animal kingdom is one of your biggest sources of inspiration. What are some of the earliest memories you have, which contributed to forming the foundation of your interest in nature?

I have two relevant memories:

1. When I was very young, my grandmother took me to Taronga Zoo in Sydney. I became fascinated by the red pandas. I wanted to be one.

2. At primary school we went on a trip to the beach. I love crustaceans and their construction. I started picking up dead crab shells and managed to convince the rest of the class to help me gather my collection. However due to the summer heat, the smell of crab carcasses on the bus home meant that the bounty was jettisoned. 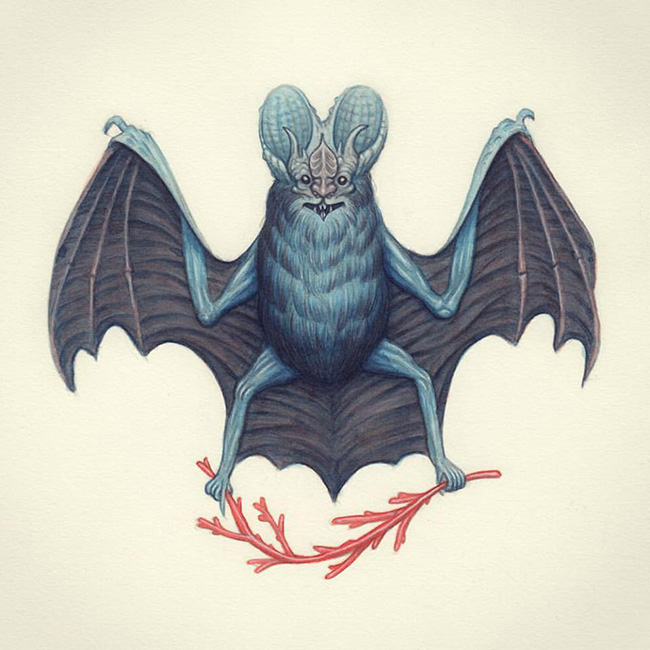 The dialogue is something I really enjoy. I love hearing feedback from people who have been paying attention to the work. A lot of the time I don’t have a concrete notion of exactly what something might mean, so it’s enjoyable when a viewer volunteers their interpretation. It may or may not influence what I produce. It’s difficult to extract and identify influences sometimes. But it’s good to take it in and let the brain filter bits out.

I went through a break-up a few years back, ending a 13 year relationship that begun in my early twenties. Just as I was feeling the most lost, a gallery offered me my first solo show, which proved an ideal distraction. Working towards an exhibition is a labour intensive and introspective task. I’m not entirely sure of the lessons I learnt. I probably worked too hard and went a little crazy. But the whole period helped me understand a sense of who I am, my limits, etc. You end up doing a lot of thinking while drawing. 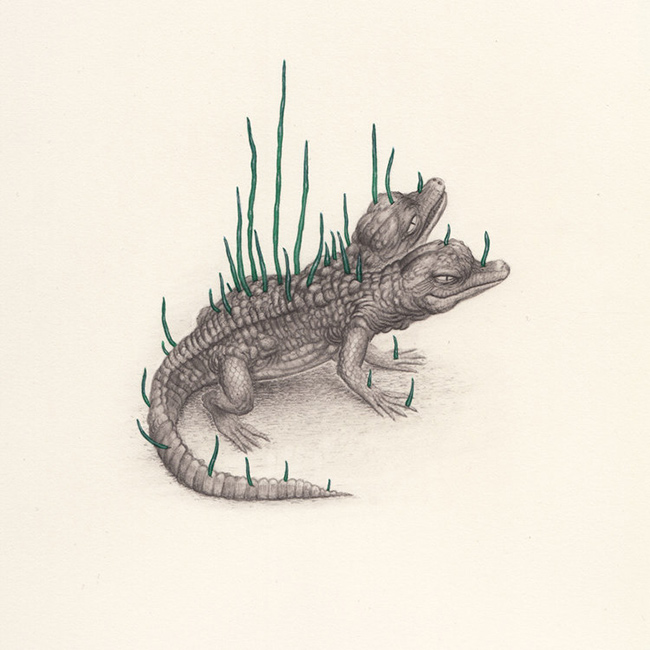 Either a piece of Max Ernst or Alberto Giacometti. I love how each artist created work with near-impenetrable surfaces, perfect for pondering.

What’s next for Nick Sheehy?

Not sure. I have a joint solo show in early 2017. Other than that, take things as they come. Continue to figure stuff out. 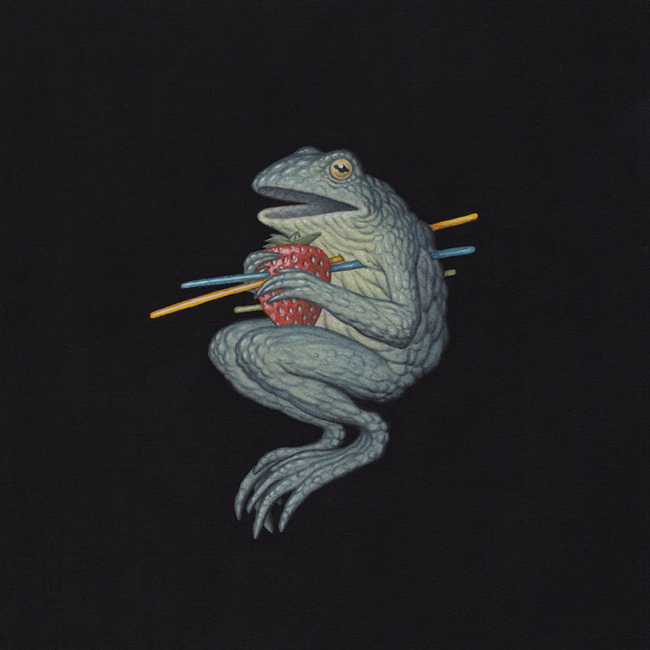 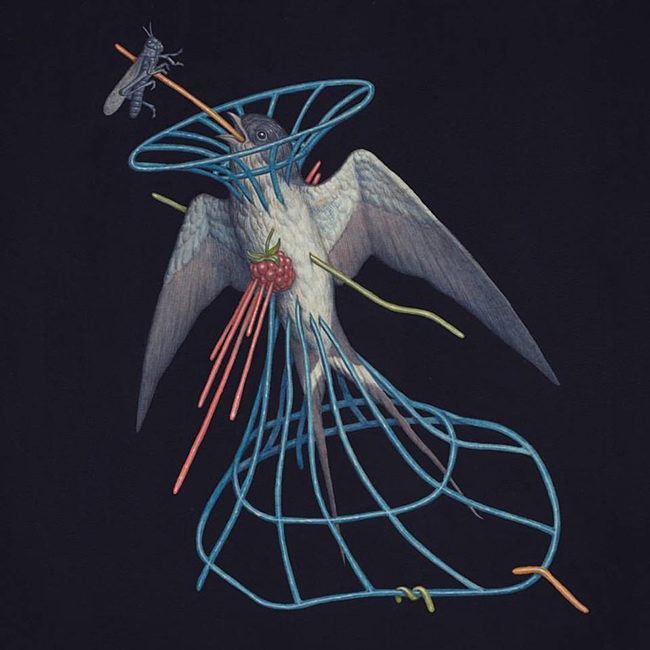 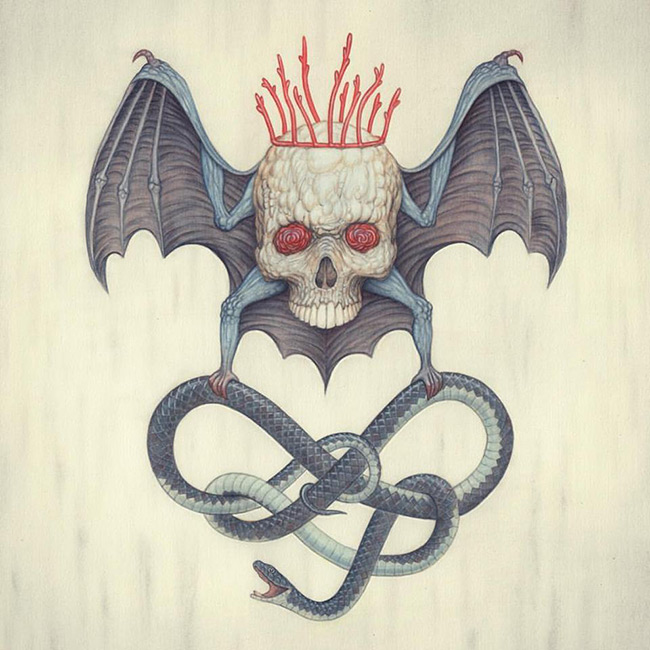 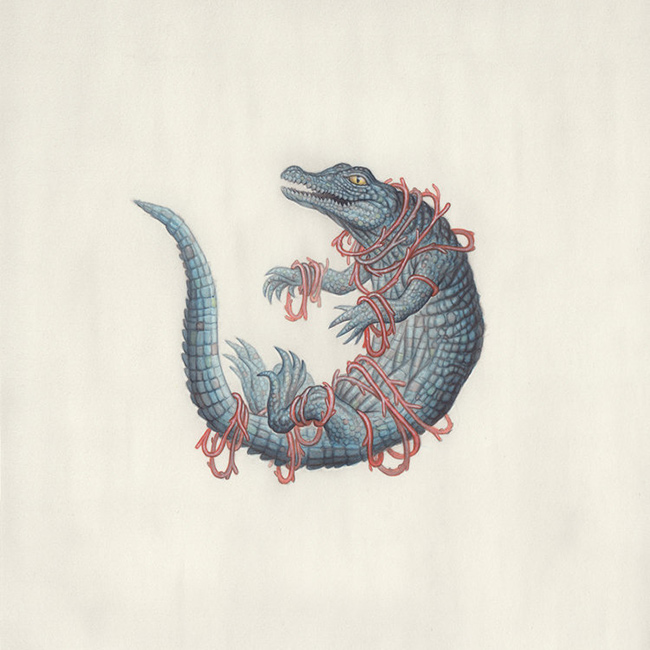 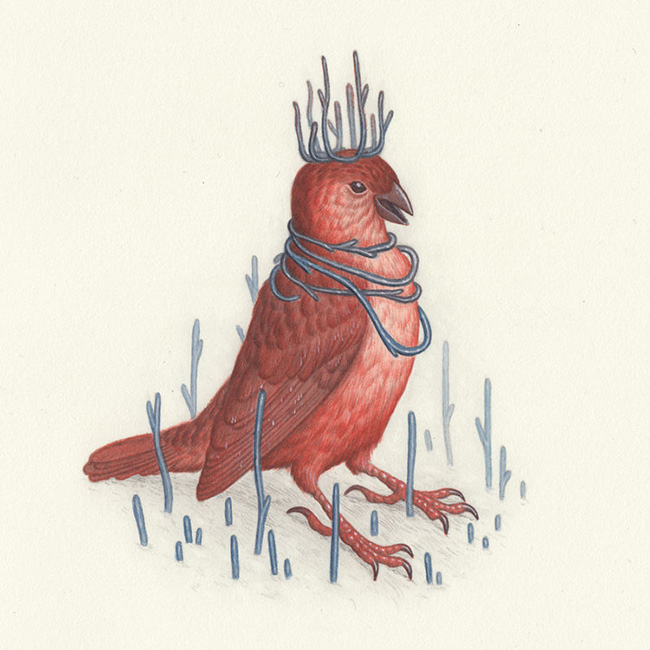 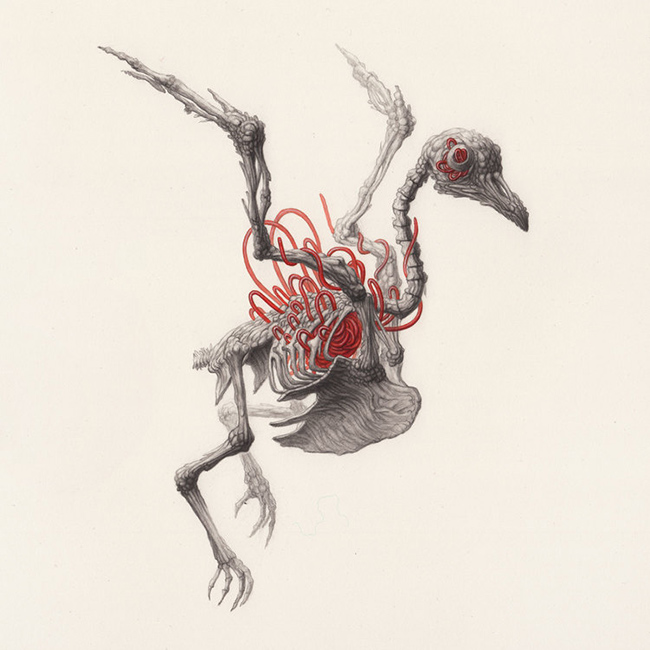 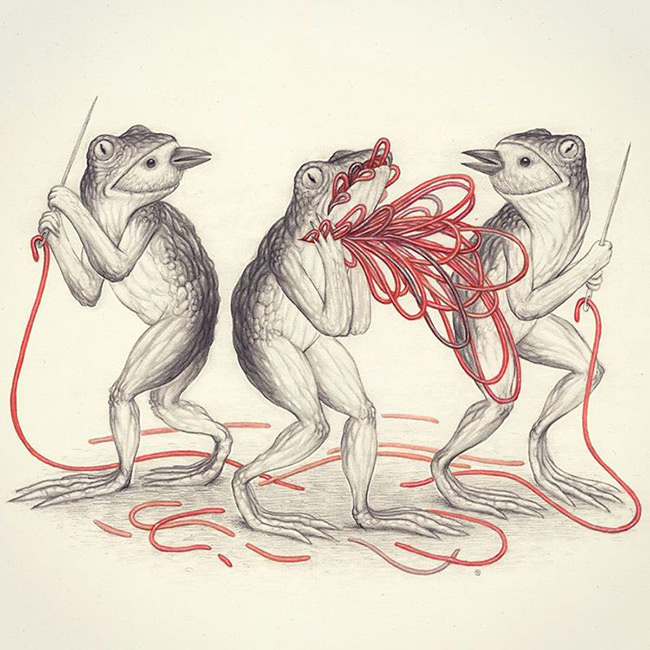 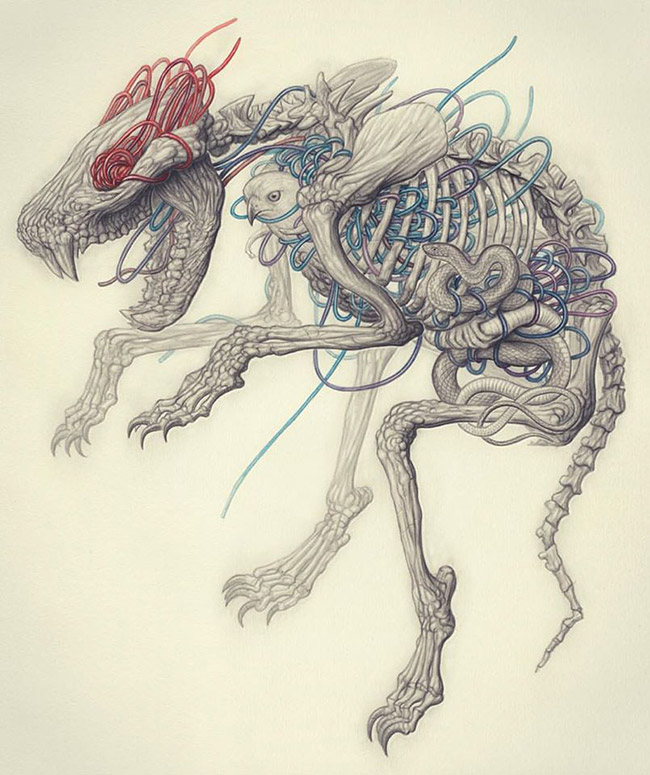 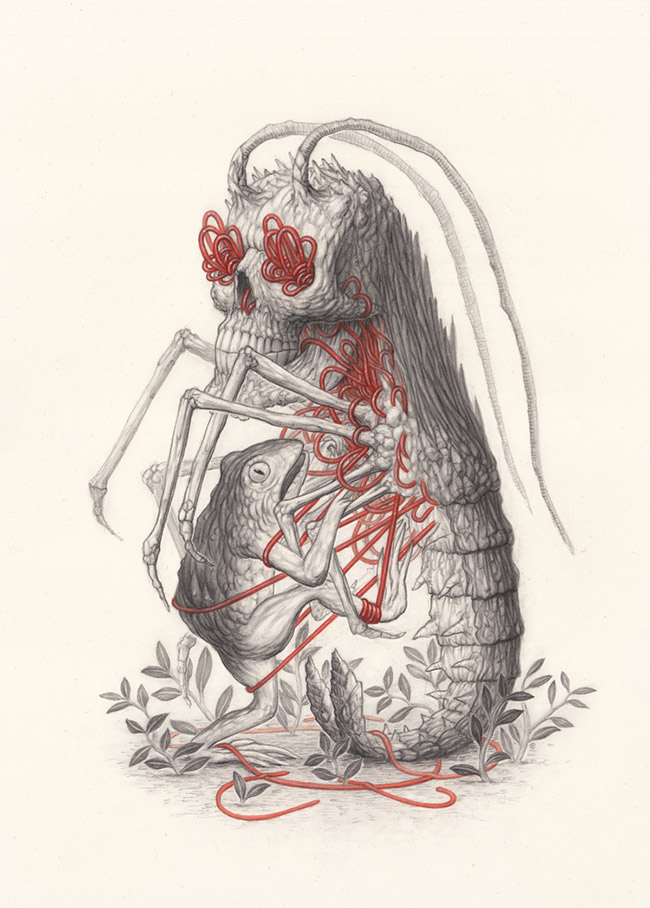 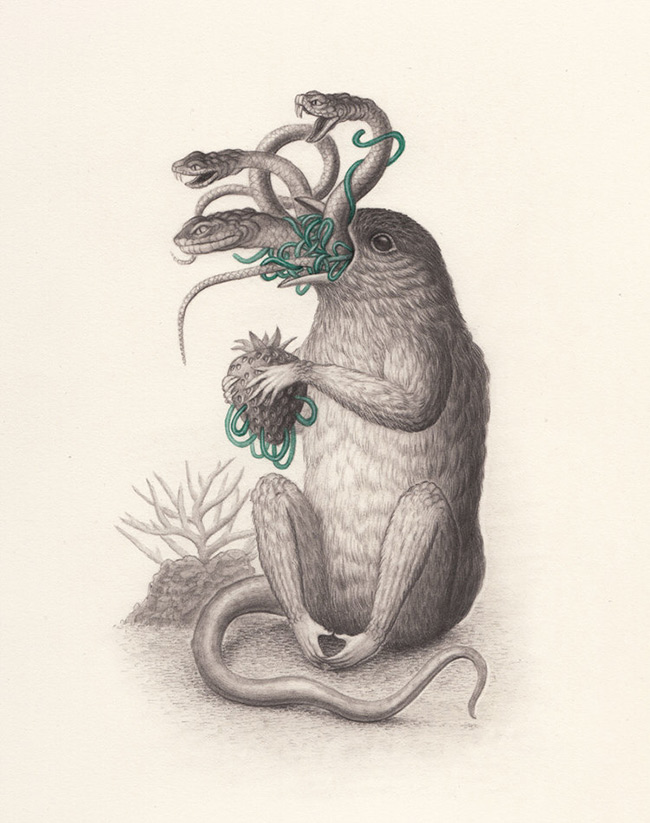 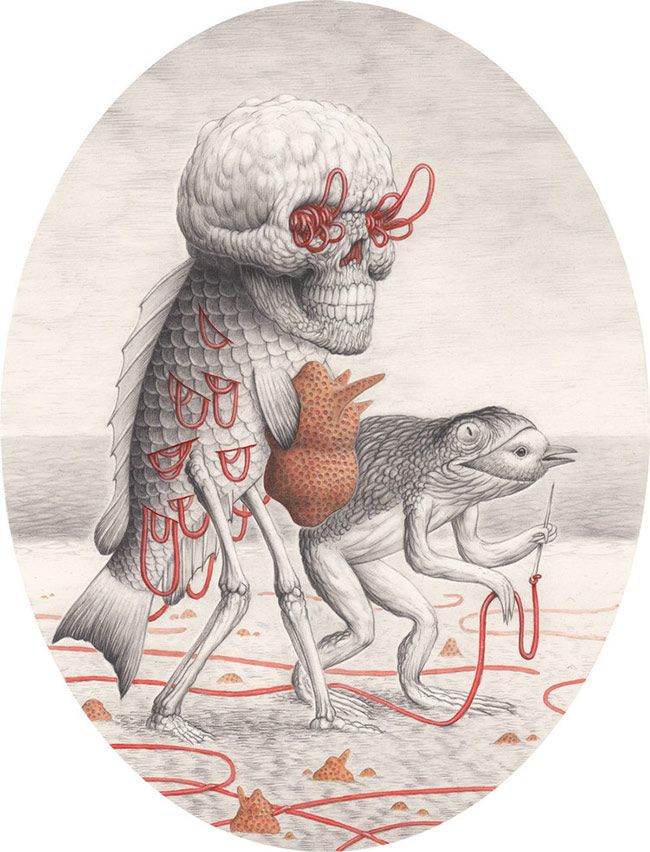 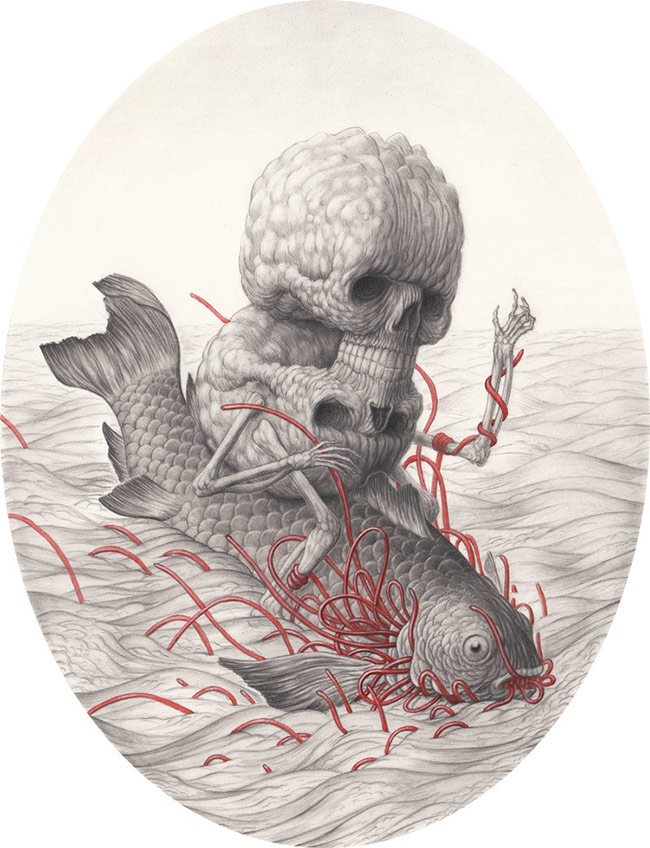 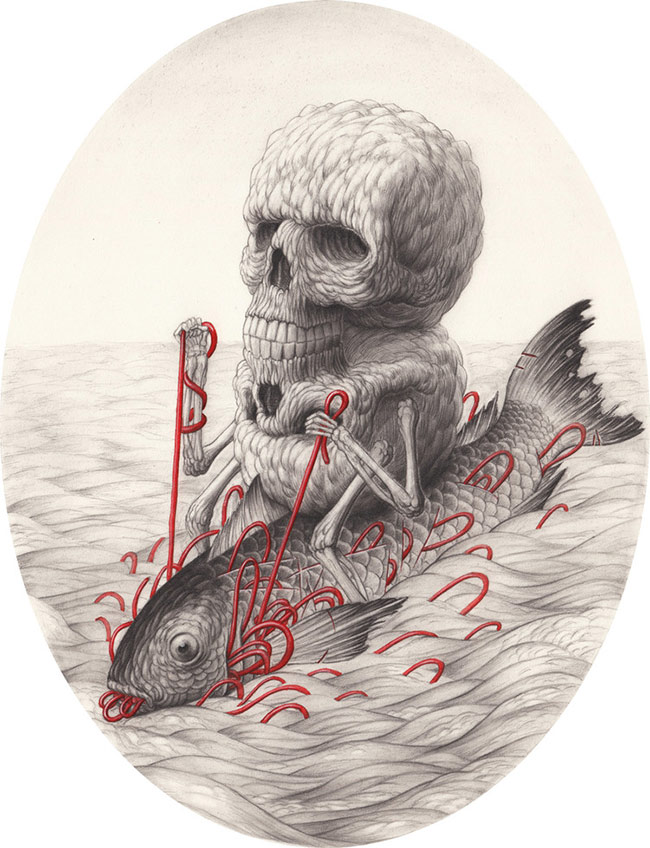 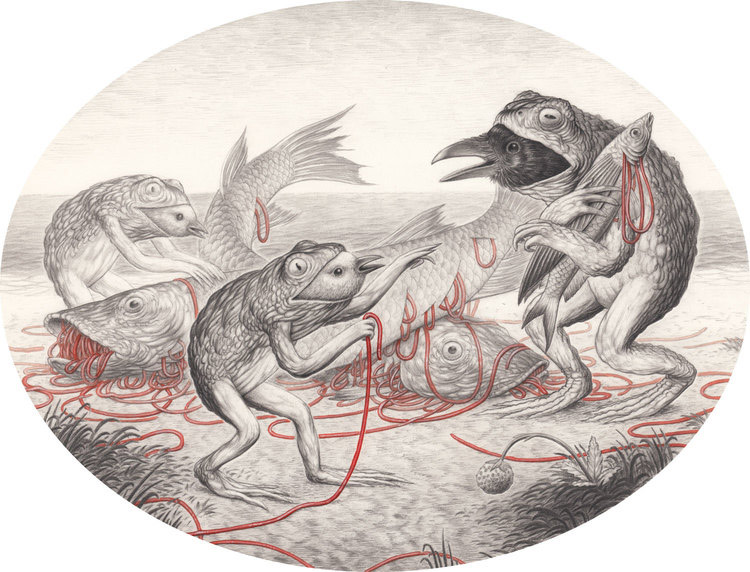 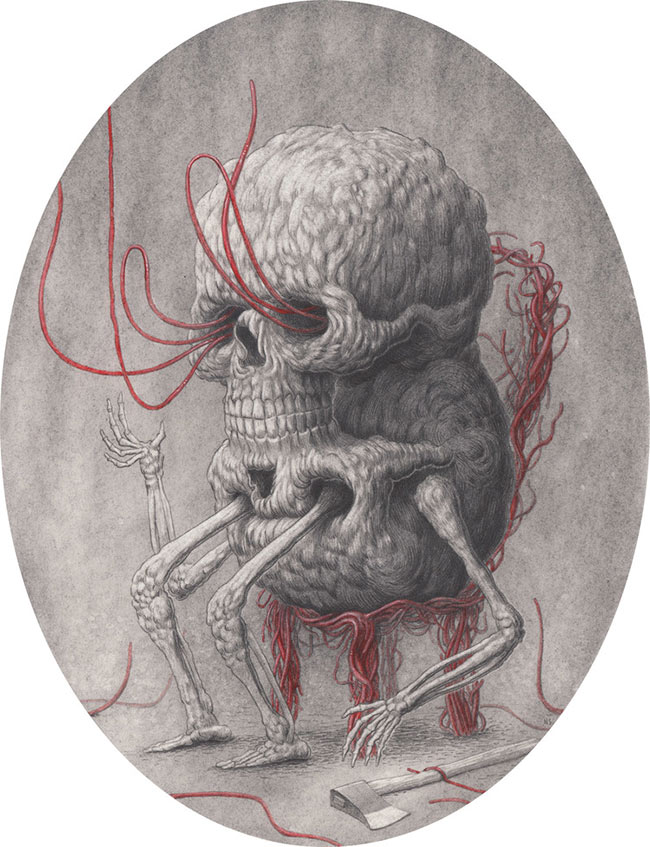 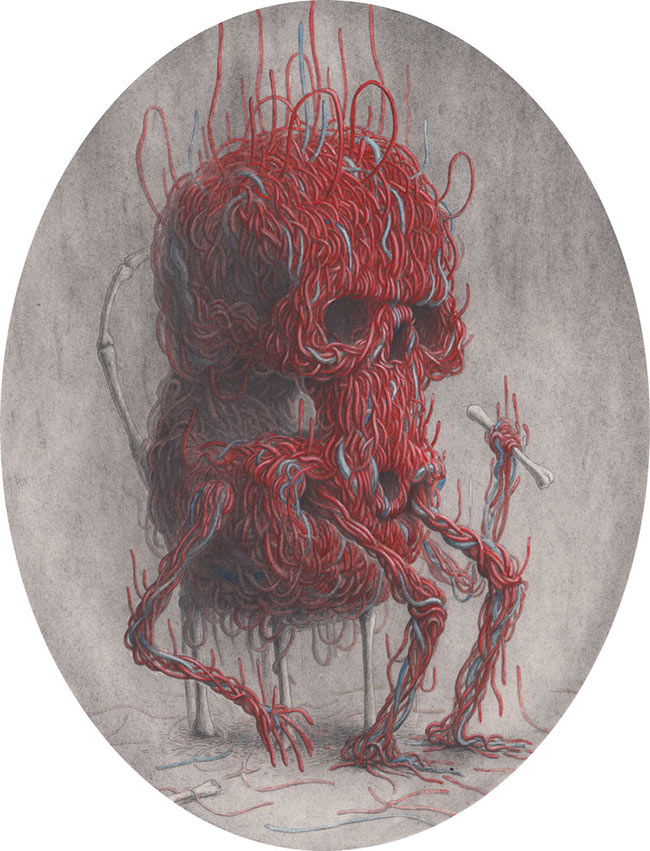