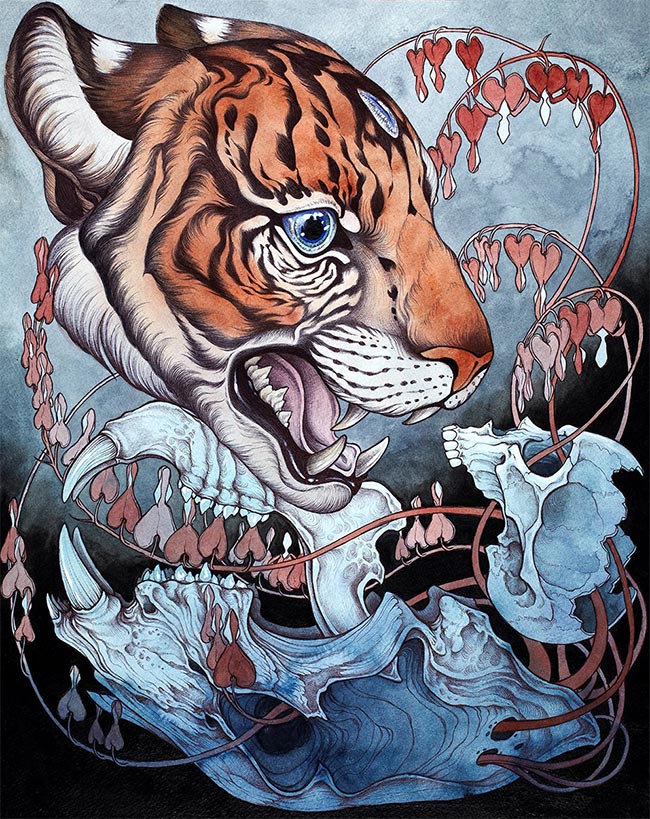 Caitlin Hackett’s passion for the natural world has inspired her art since she first put pencil to paper as child. Hackett grew up on the northern coast of California, between the cold Pacific ocean and the redwood forests. It was there that her love for nature and wilderness flourished. As she has grown Caitlin has combined her love for animals with an interest in both wildlife biology and mythology, to create artwork that speaks to the current biological mythos that constructs the barrier between what is considered ‘human’, and what is considered ‘animal’.

Mirroring ancient myths of transformation, often in grotesque ways, we find in contemporary times that animals are being transformed biologically due to interactions with human pollutants; there are frogs with triplicate legs and blind eyes, cows with shriveled sets of legs growing out of their backs, two faced piglets being born on factory farms and radioactive fish rotting from the inside in poisoned seas, the list goes on. Caitlin Hackett is interested in the power of these mutations, both for their mythological allusions as well as their dire environmental implications. Her hope is to remind those who view her artwork that we too are animals, embedded in this fragile world even as we poison it.

Hackett’s art alludes to the boundaries that separate humans from animals, both physically and metaphysically, and the way in which these boundaries are warped by science, mythology and religion alike. Like the gods of so many myths, humanity has warped the world into our own image, and it is this often frightening image that Caitlin hopes to reflect in her work.

“I love narrative work in general, I like art that tells a story, art that pulls me in, I like to feel as though I am being swept off to another place or catching onto part of a secret. I have always been something of an escapist and a day dreamer, and while my work is not based on any particular narrative it is meant to be evocative of another land. In my mind all of my creatures exist together somewhere, in a world both similar and eerily different than our own. I want my drawings to be reflections of the world we live in, echoing both its beauty and its tragedy and distorting them so that they confront the viewer more powerfully. I also know that when I create a piece and release it into the world so the say, that it’s story will grow as people view it. In that way it becomes a collaboration, with each new person adding their own story to it, finding their own connections, I like that my work can become someone else’s day dream as easily as my own.” – Caitlin Hackett (The Flying Fruit Bowl) 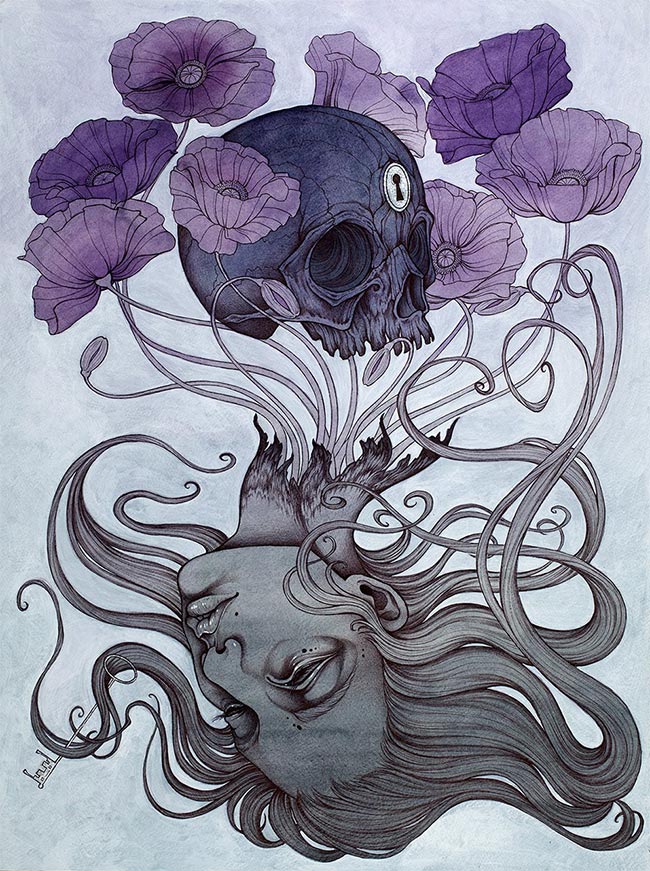 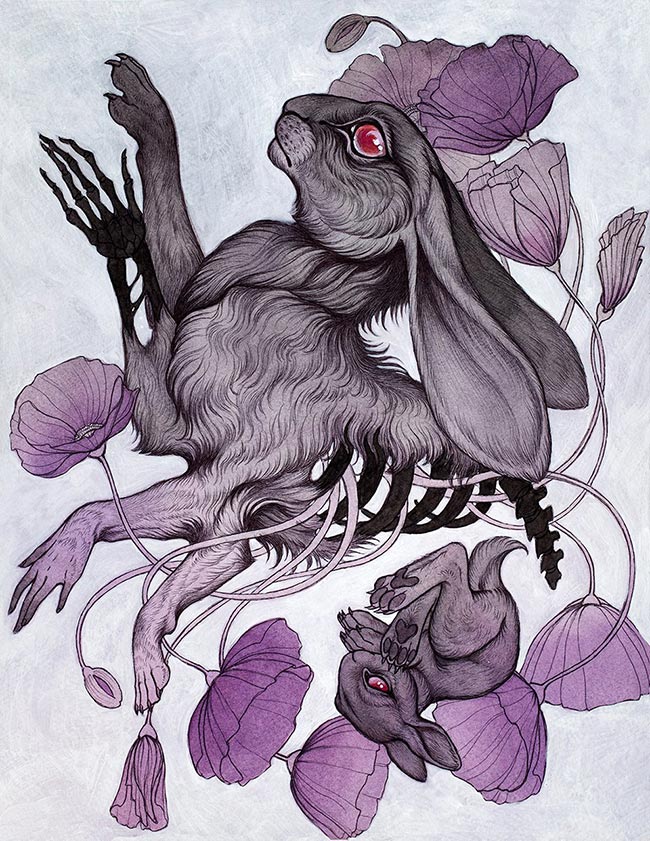 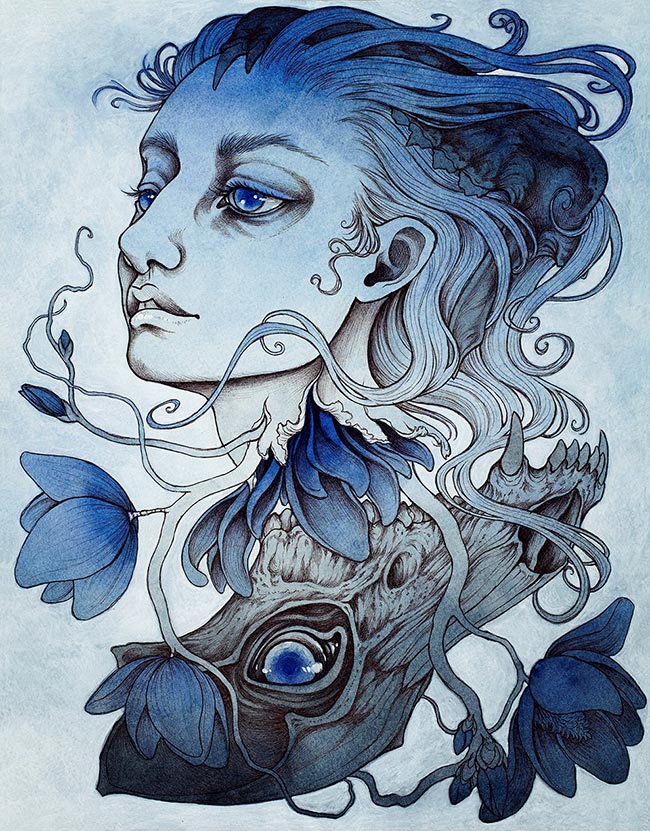 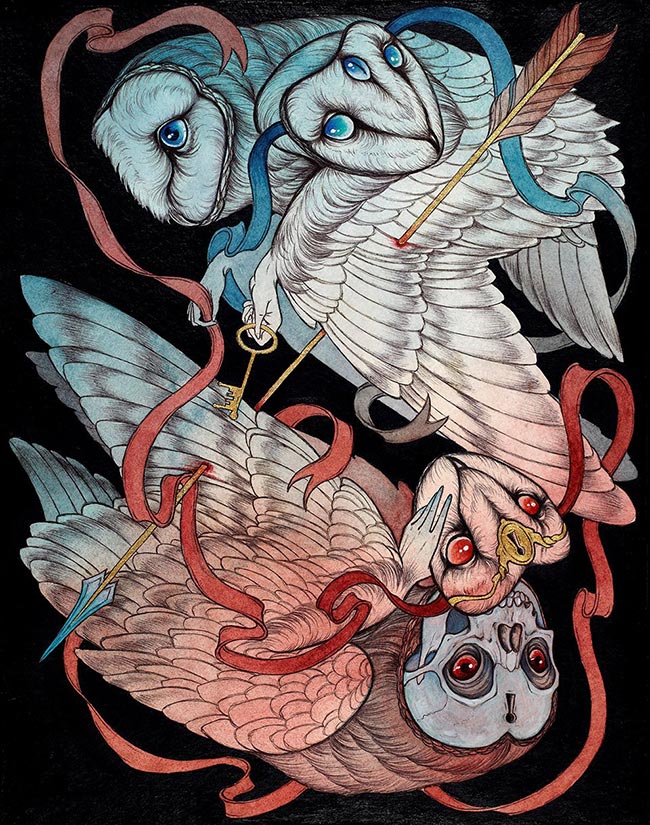 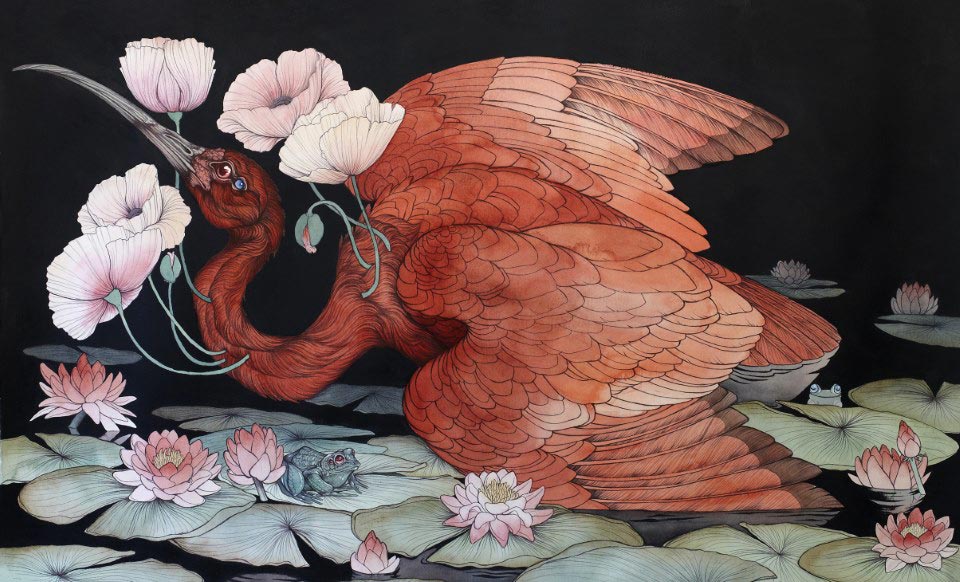 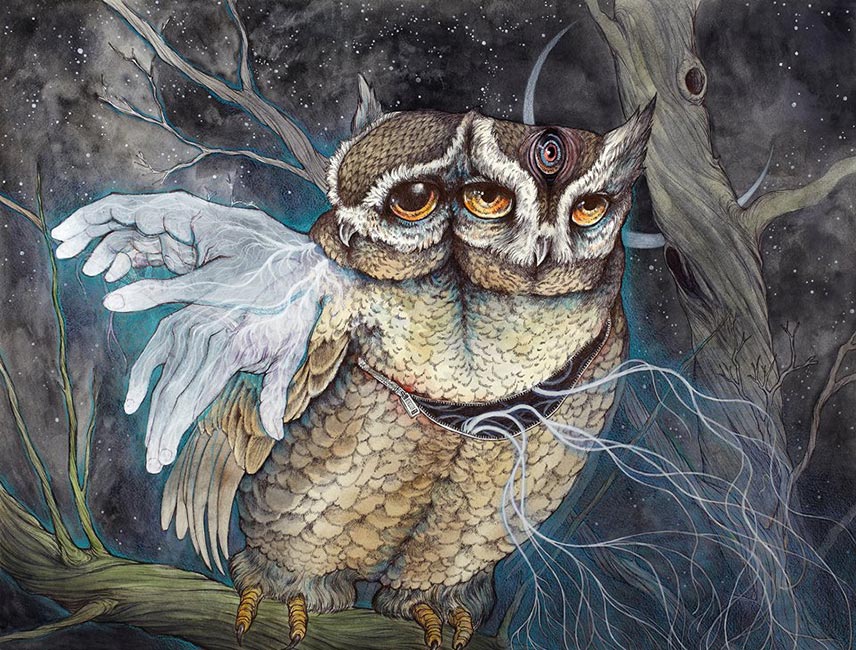 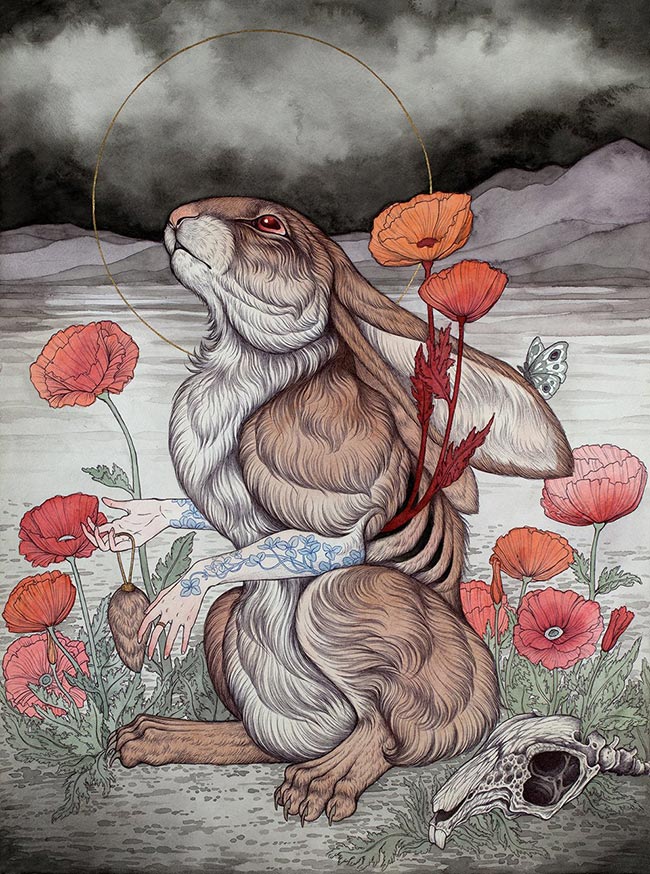 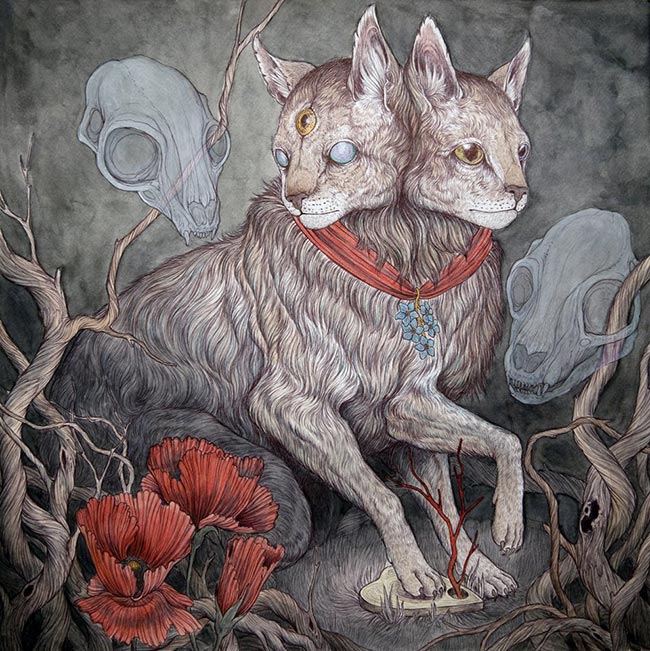 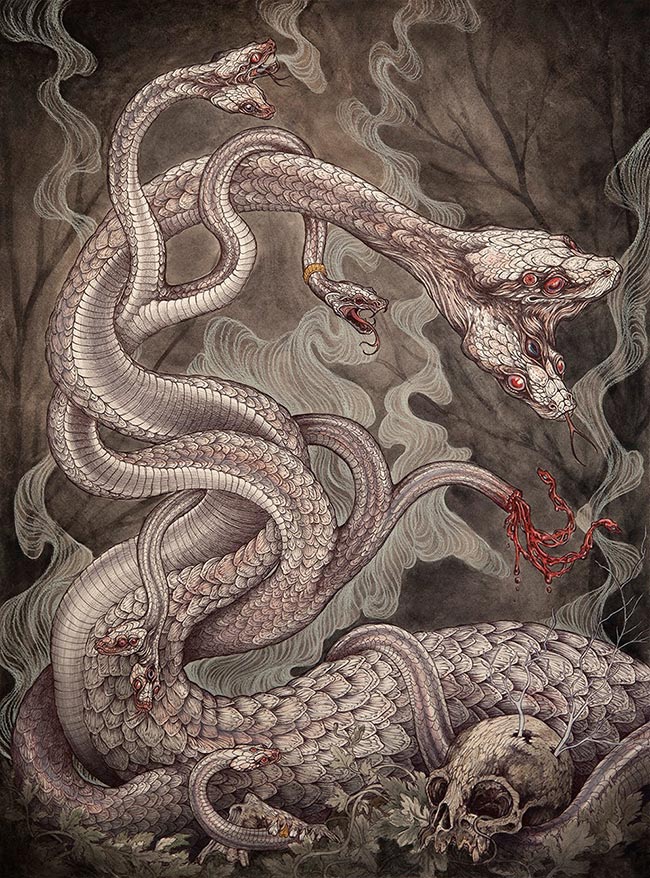 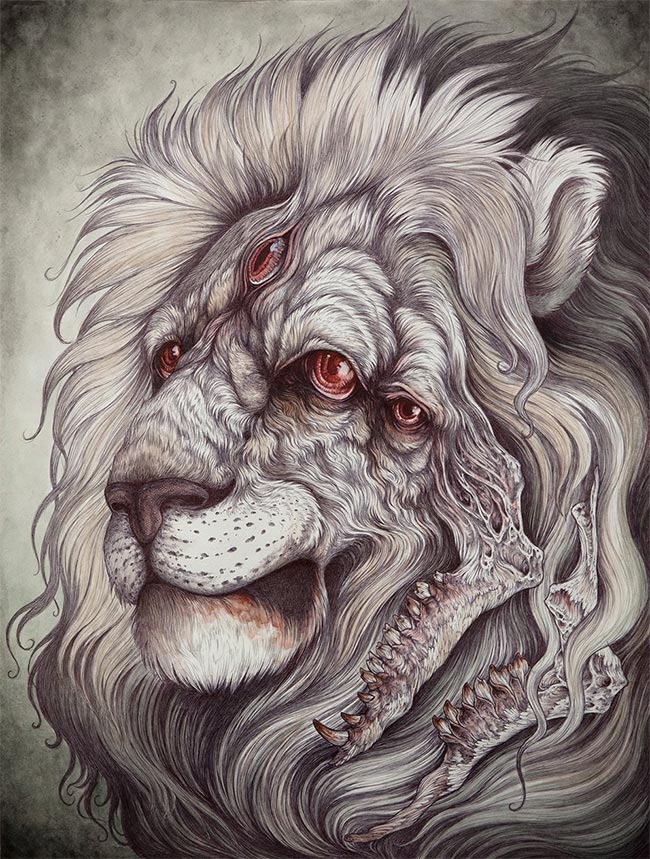 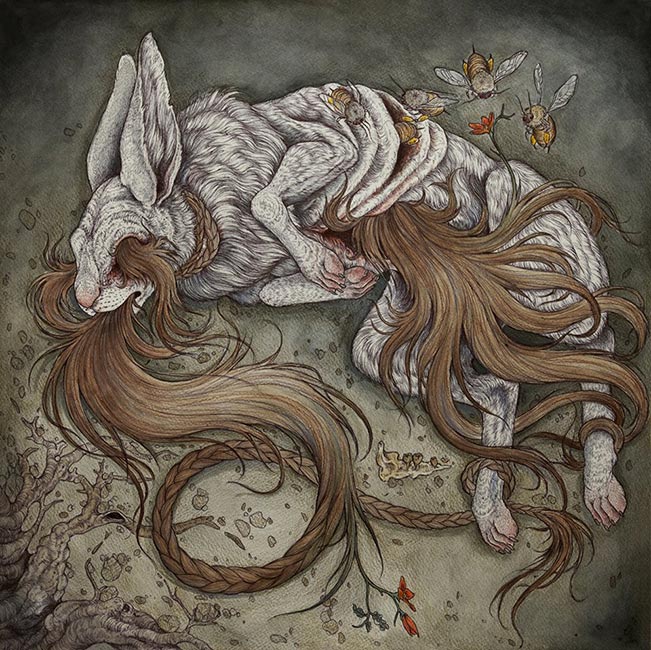 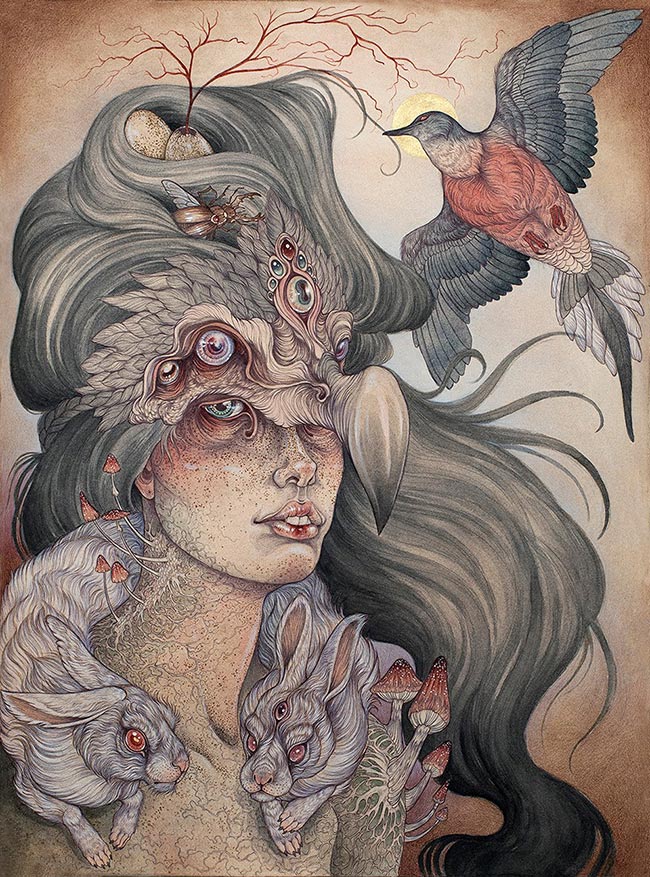 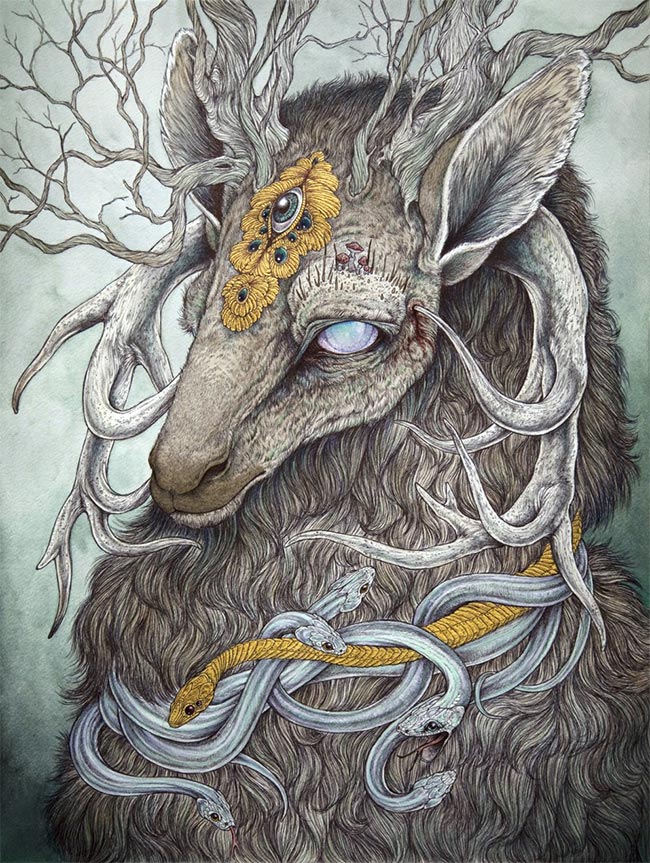 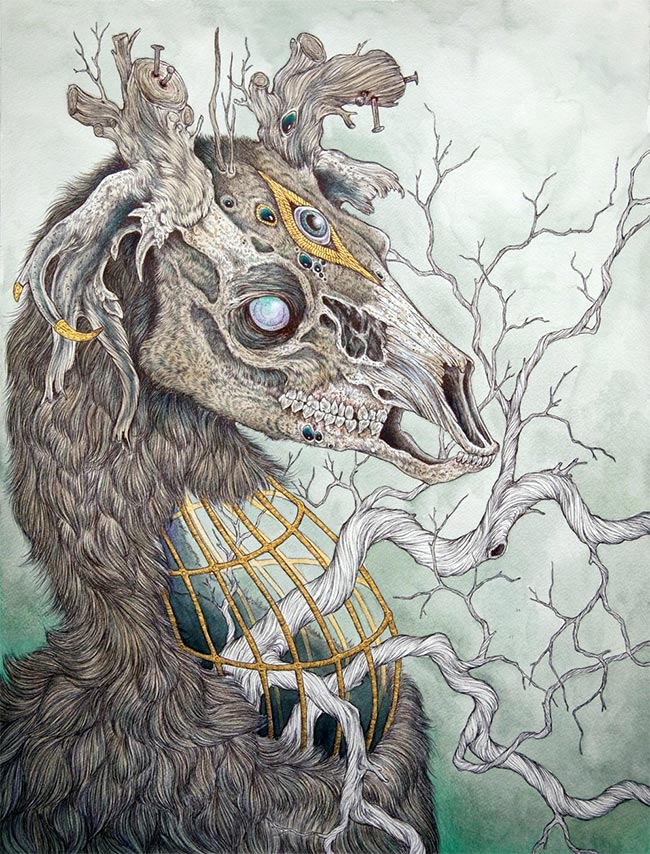