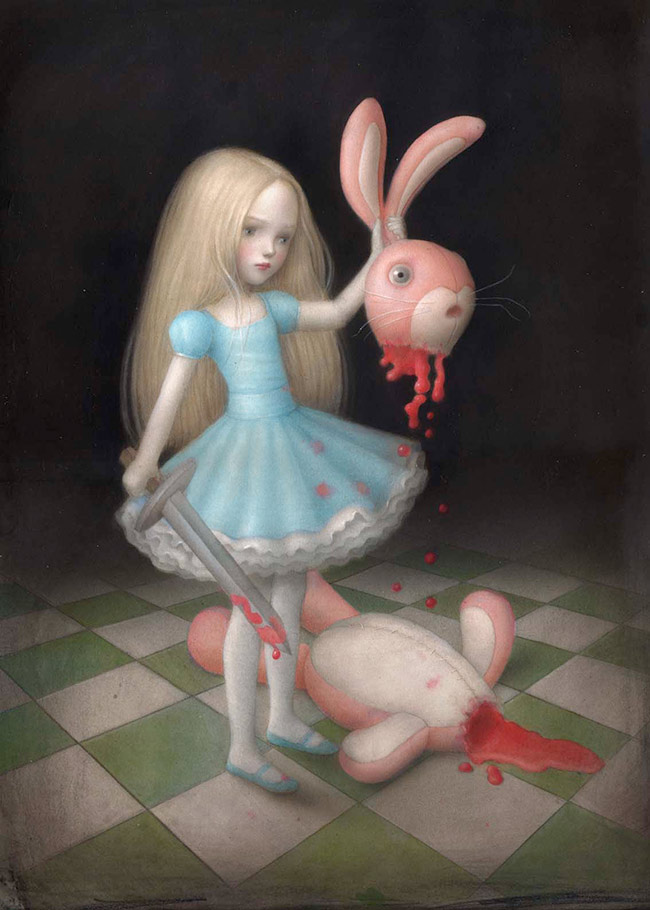 Nicoletta Ceccoli has an affection for the unusual; a fondness which provides her with endless inspiration for her creative endeavours, whether they be illustrative or of a more personal nature. Ceccoli concocts imagery which initially seems sweetly endearing, although on closer inspection her paintings soon bare fangs dripping with the macabre; the stuff of nightmares. The conceptual and aesthetic duality that exists between innocence and maturity; light and dark; repulsion and attraction, are all of paramount importance when it comes to informing the narratives Ceccoli nurtures through her childlike protagonists. We witness characters in the midst of transformation, all the while being treated to symbolic signifiers from our childhoods and memories of innocence, enabling us to identify, re-live and relate to our own personal life transitions.

Nicoletta Ceccoli was born in 1973 in the Republic of San Marino, Italy. She graduated from the State Institute of Art in Urbino with a degree in Animation. In 1995 she started working as an illustrator of children’s books and has since illustrated over 30 titles. Nicoletta has won numerous awards for her artwork, including a silver medal from the Society of Illustrators in New York in 2006. Her work has been exhibited all over the world.

WOW x WOW is incredibly grateful to Nicoletta for taking some time out of her busy schedule to answer some of our questions. Find out a little more about this intriguing artist in the interview below. 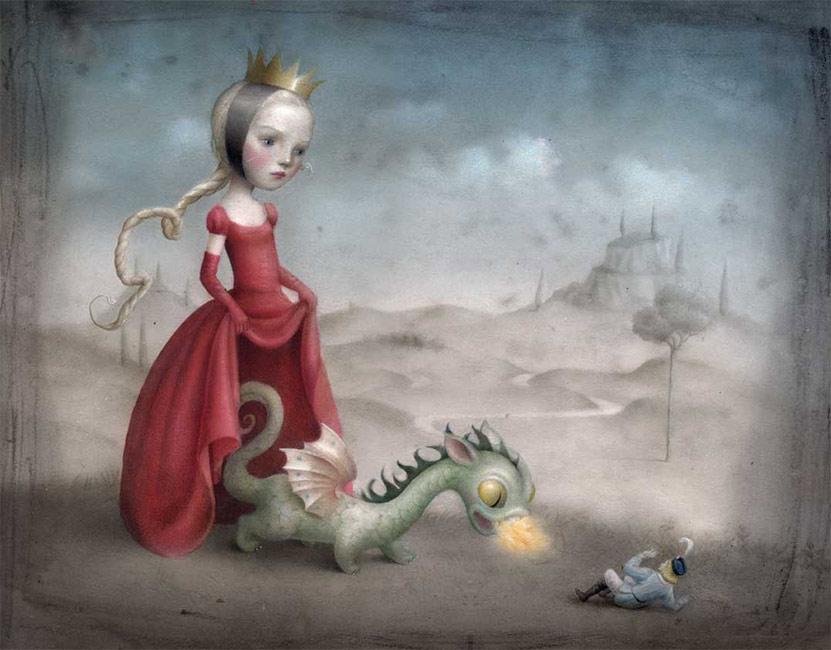 Hi Nicoletta! Thanks ever so much for freeing up some of your valuable time to have this wee chat with us, we really appreciate it. To start us off, if you would please introduce yourself, touching on anything you feel relevant to story of Nicoletta Ceccoli the artist?

I grew up in the country side of the republic of San Marino, in the middle of Italy, an ancient republic with beautiful medieval buildings over the top of the Titano mountain. This surely inspired me for some of the settings that appears in my illustrations. I spent my childhood in my father’s laboratory creating toys and making drawings. My mother was a primary teacher, and she is definitely responsible for my love of children’s books. Growing up I simply never stopped loving the children’s universe. Childhood remains the only magically joyful and free condition, and as adults we end up losing that. In my opinion it can only be regained through imagination. 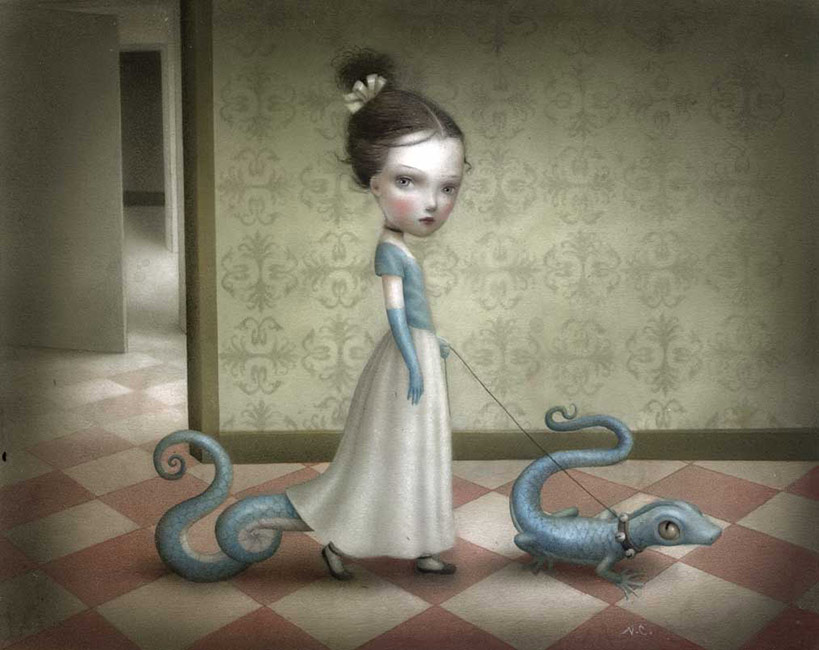 I still live in San Marino. Not far from the sea and the woods. I love nature. It is a great environment which allows me to focus on my art. I spend a lot of time in quiet solitude. I don’t feel as though I am a part of a specific ‘art scene’ here and even less part of a community. I am a little a hermit. Although, there are some good illustrators/artists that I admire, and we’ll all meet from time to time to share what we are doing and to ask each other for advice. There is also an exciting independent comics and graffiti artists studio in the area which I follow with great interest. Very inspiring stuff. 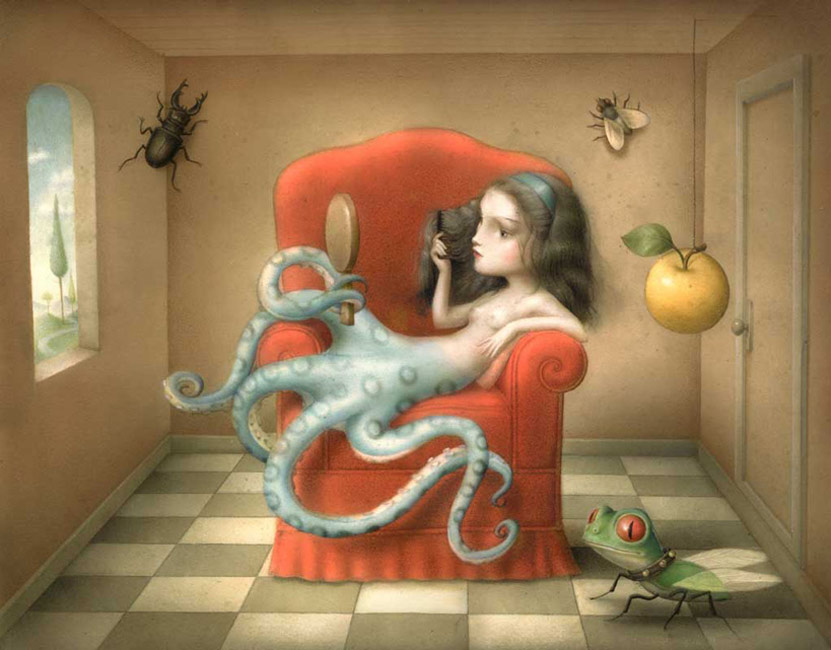 Being both a commercial illustrator and a fine artist, does one discipline influence the other? Is there a certain type of synergy that exists or do you think of them as two separate entities?

For me the term ‘fine art’ refers to the work I create that is a product of my dreams and my unconscious; this way allowing me to express my inner thoughts, impulses and desires. With these images I suggest poetic relationships between things, as opposed to logical connections. 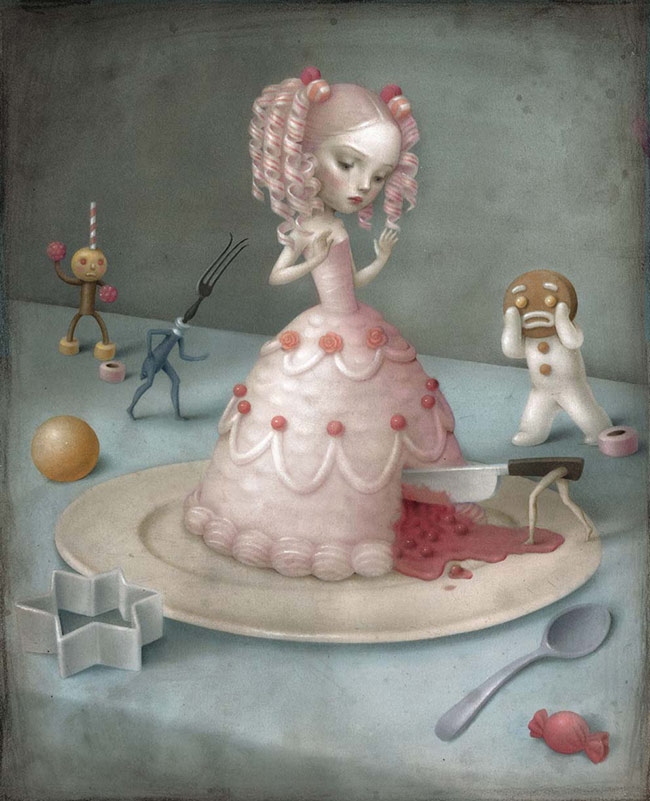 You graduated with a degree in animation from the Institute of Art in Urbino. Do you feel that the time you spent there was valuable to your growth as an artist? Also, what was the catalyst for you to make the transition from the field of animation to that of fine artist?

Yes, I studied Animated Cinema in Urbino .The whole city of Urbino is an open air museum, all is ancient, timeless. There is a kind of classic quality in my pictures that comes from the Italian Renaissance art I breathed there. From animation I learned how to translate a story into images, even though I never attended a real illustration class. After 20 years as a freelance illustrator I am now more focused on my personal artworks. The transition toward ‘fine art’ happened slowly and in a natural way. I always made personal artworks alongside commissions. In time, I came out with a more mature style and I found the courage to submit what I was doing to some galleries. 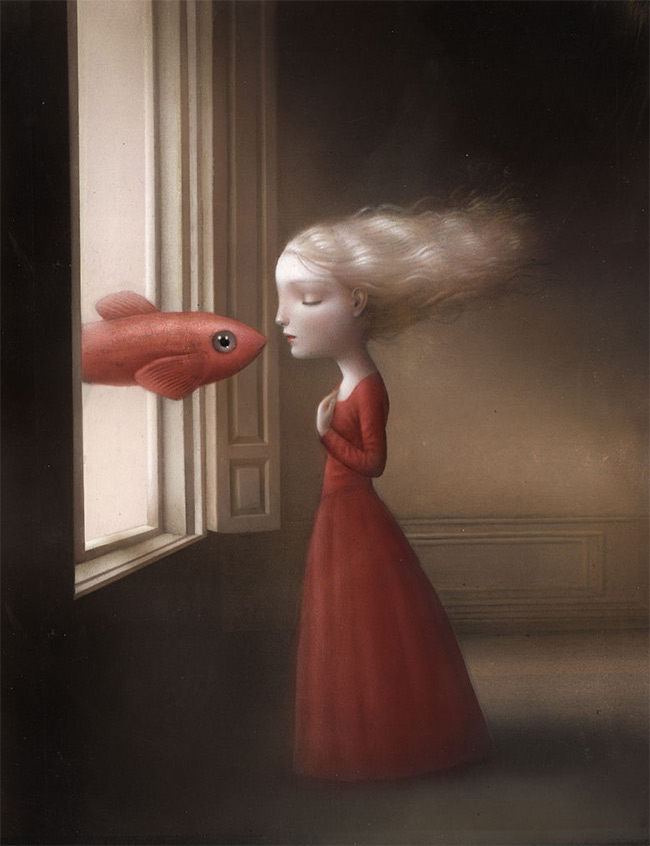 Once you have an idea for an image, what’s next? Does the nature of the image determine what medium you will use to realise it? What do you use in the way of reference material and how do you go about sourcing it? If you could give us some insight into how you tackle the creative process?

I start from a rough sketch. I then collect documents and inspirations, such as photographs or paintings, which I keep in my extensive library; I’ll refer to these while I try to put down a more refined study. Sometimes I take a photo of myself if I need a girl in a certain position, but I avoid taking a realistic approach to the figure. For my children’s books, I tried different techniques whenever possible; among these were digital, photography and puppets. Some stories required a modern touch, that I achieved digitally, while others needed a more classical feeling, for which I use classical techniques, such as acrylic on paper or canvas. 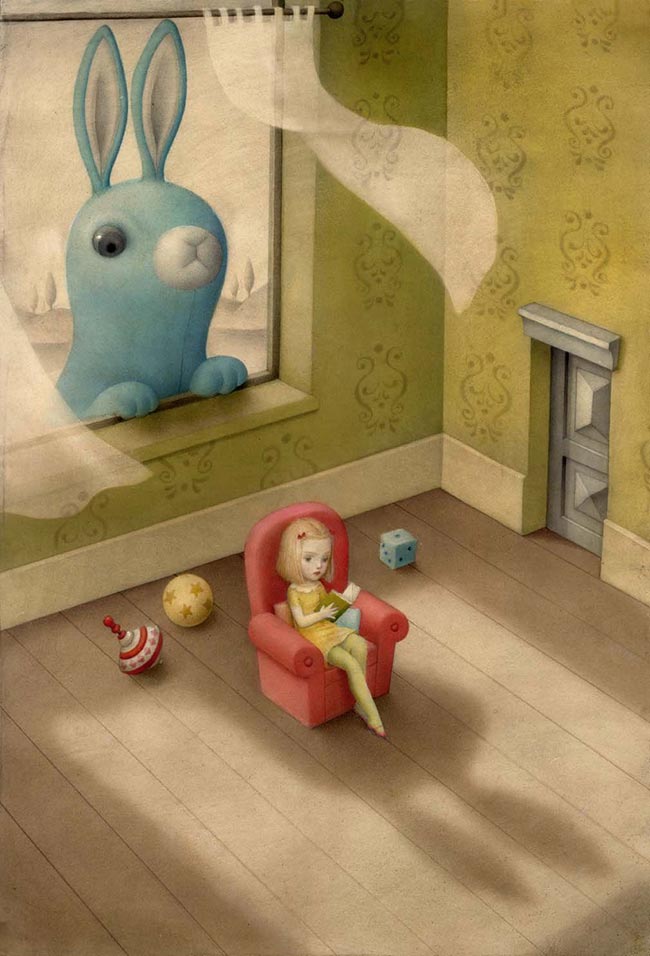 As an artist whose work contains a strong narrative element, can you let us in on what initially got you interested in visual storytelling? Also, in your opinion what would you say the are the most vital ingredients that go into creating a successful visual narrative?

I always felt the need to live through other’s stories; other lives more interesting than my own. I found these in books, cinema and painting. Without the starting point of a story, to this day I still find it hard to start a picture. My ‘fine art’ pieces also hide a narration, even if I tend to avoid giving explanations. In fact, I wish to encourage the viewer to start a dialogue with each picture and find their own story in them. While the viewer is in front of an artwork they should ask themselves questions. It’s not important that they get my intentions. Sometimes I’ll use titles to create mystery, rather than giving explanations, in the hope that the viewer may avoid looking at things too simply. Magritte often played with the viewer in this way. He depicted a pipe whose title was: ‘This is Not a Pipe’. 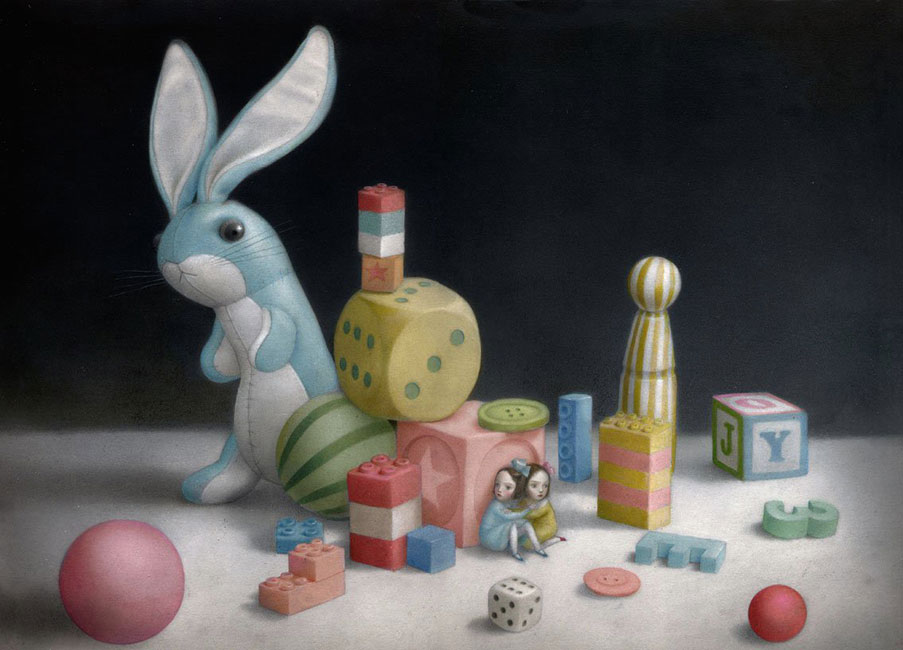 Some of the songs and lyrics from the early albums by the Cure inspired my artworks; the darkest ones. I also love literature, but I don’t see a direct connection between my pictures and the things I read. One of my favourite writers is Kurt Vonnegut, because of his irony. He inspires me to not take life too seriously. 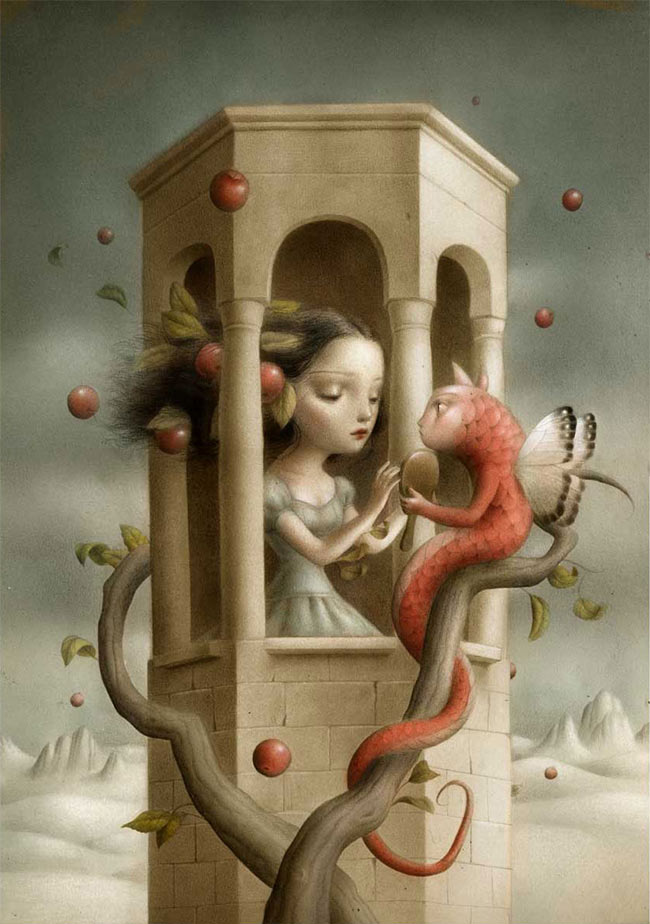 There are some recurring themes in my work that made their first appearance many years ago. It is a technique and style that I’ve refined and become more skilled in with the gaining of experience. My works have a cuteness that is distinctly feminine, but with a hint of the macabre. A scene may portray a struggle, a fight, there may be blood, but it is presented with a seductively shiny surface, and my characters look adorable, even if they are ‘freaks’. I always offer a delectable mix of repulsive and attractive in my images. I am not afraid to put sweetness and sentiment, along with more disturbing content. The result is a surreal fusion, unusual where childhood fairy tale aspects are recalled and live in paradoxical nightmares. 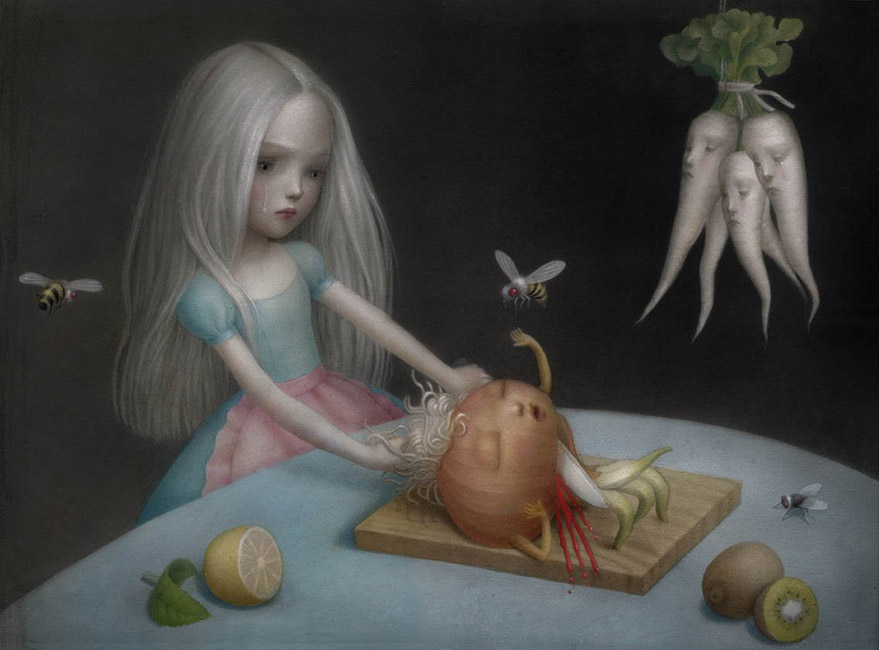 What would be the greatest compliment you could ever receive on your work?

What I find more rewarding is when someone writes to tell me that they feel a connection with my stories; that they identify with them. It makes me feel like what I do has a purpose.

I often depict lonely weird sad creatures. Half woman, half monster. The characters in my pictures are kind of my alter ego. I’ve never felt comfortable with my own body, and I have fought with these feelings all my life. When I was an adolescent I often had the sensation of being a ‘freak’; I felt a sense of isolation, of being lonely and closed in my own thoughts. This brought me to feel a connection with those people who looked foreign to society. The word ‘normal’ scares me a little. In the film ‘Freaks’ by Tod Browning, the idea of man and monster is reversed: the human cruelty of so-called normality is monstrous, not the morality and goodness of the ‘others’. I feel an affection towards creatures that are unusual. 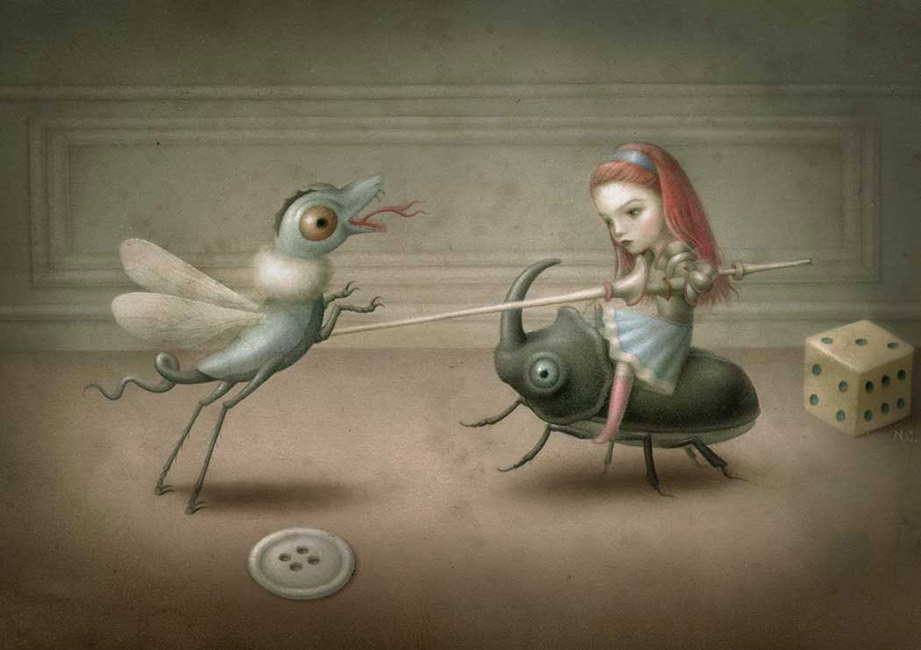 ‘La Bout du Monde’ by Leonor Fini. She made portraits of women that seduce and hypnotize the viewer. They appear to us as sorcere-priestess types; holders of occult powers, and women that seek power, creativity, spirituality, independence. This painting draws me in with its mysteriousness; into a magical and fantastic dimension that exists on the threshold of the dream, the nightlife and myth. Art is a magical process, something like alchemy; a process through which we elaborate inner fears, irrationality and questions.

What’s next for Nicoletta Ceccoli?

I may come back to a book project. Something that will set me a new challenge. 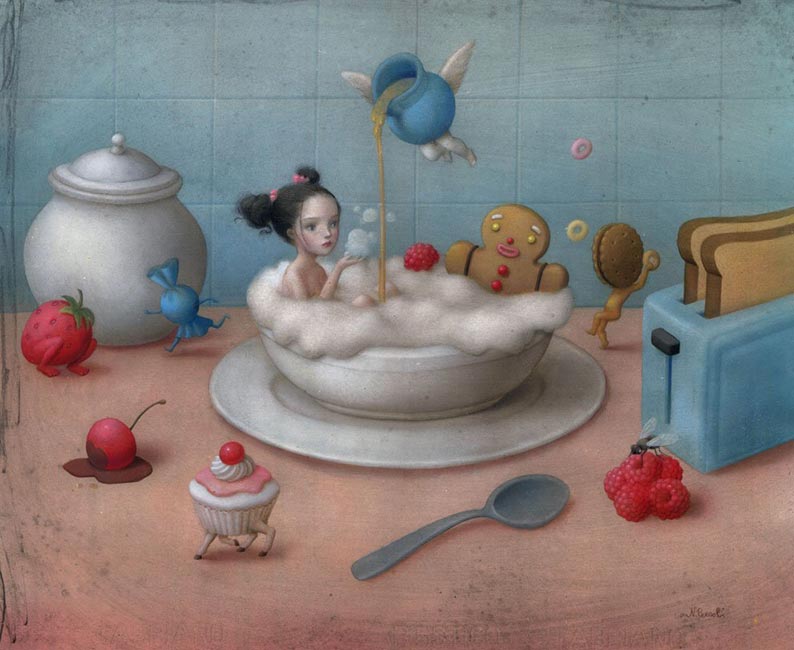 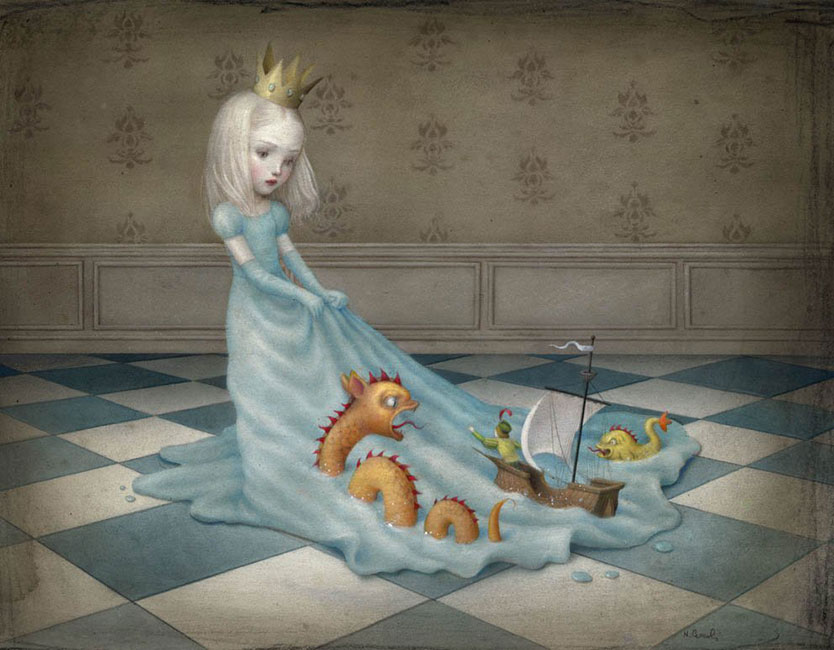 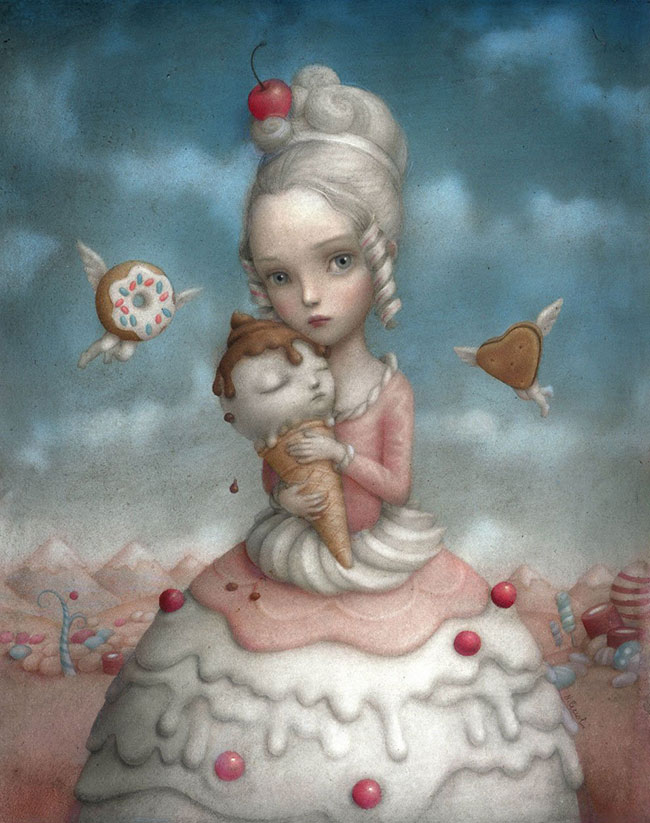 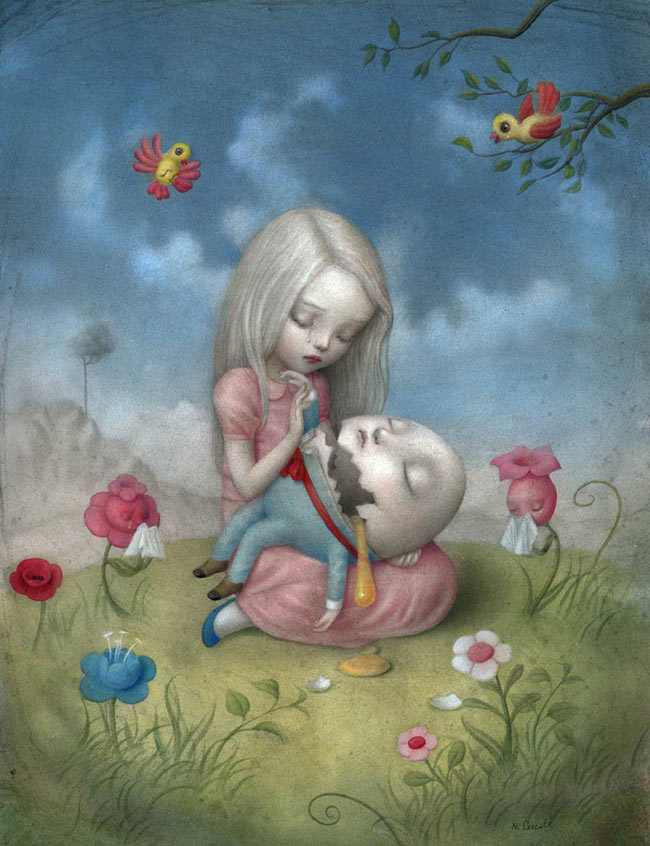 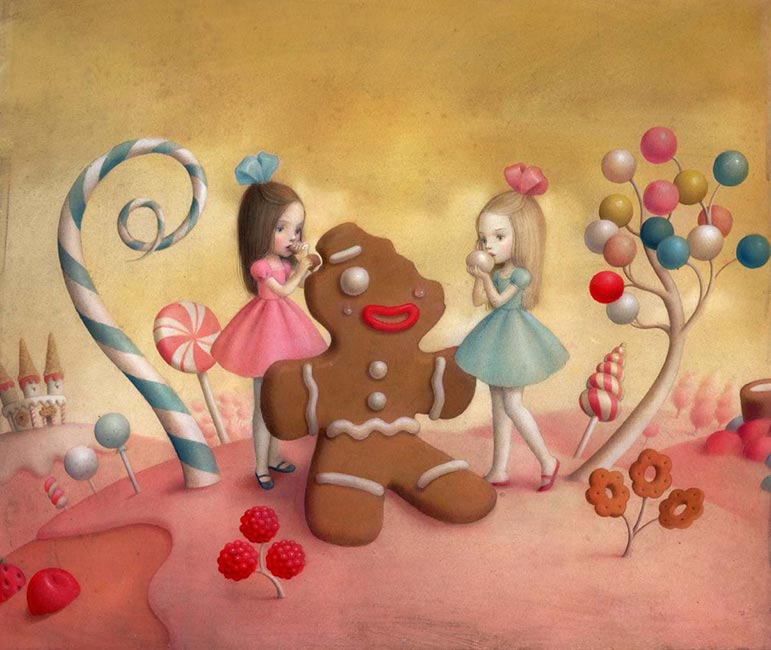 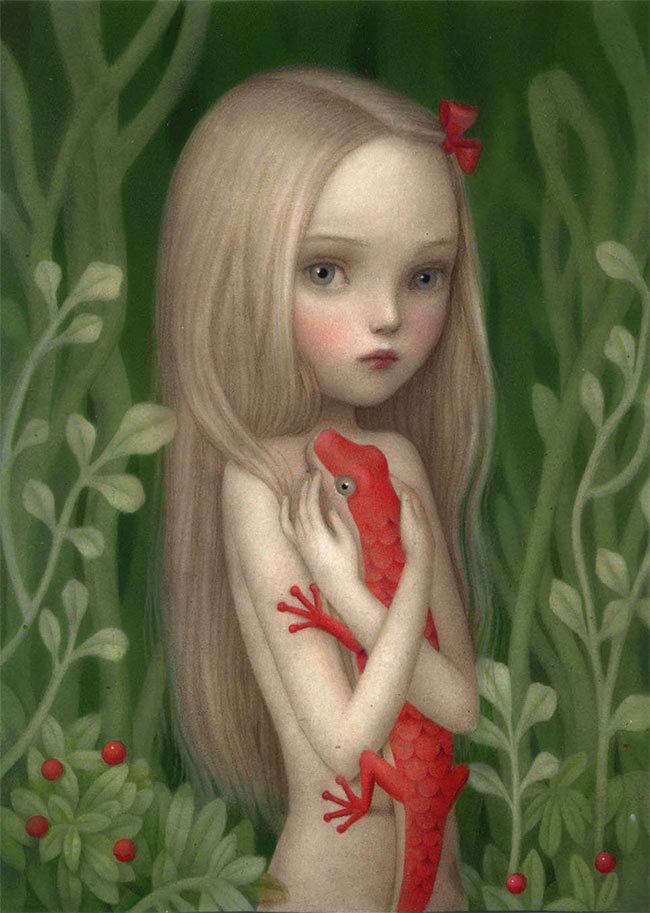 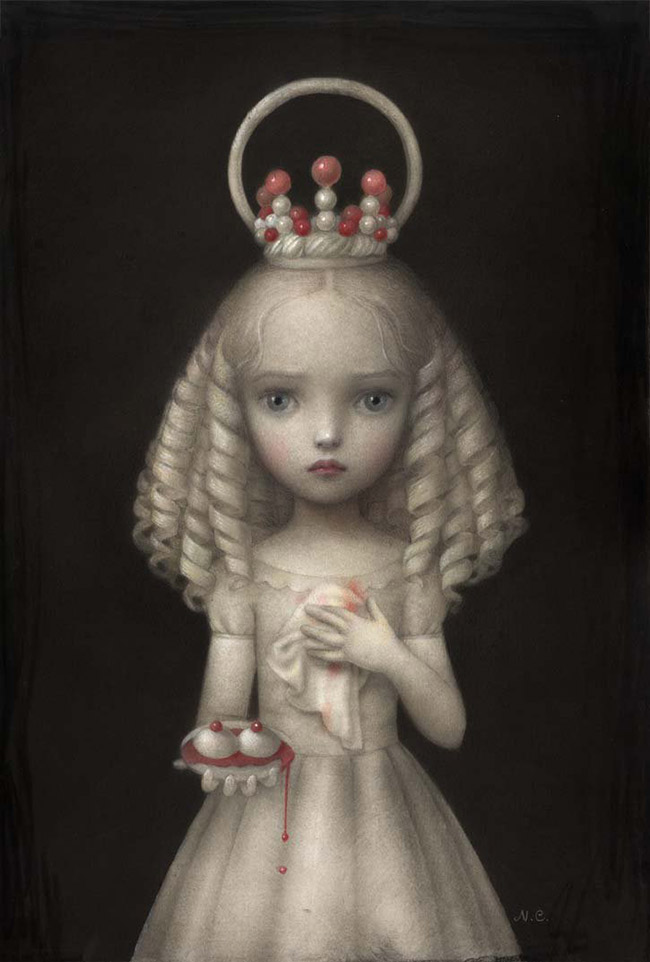 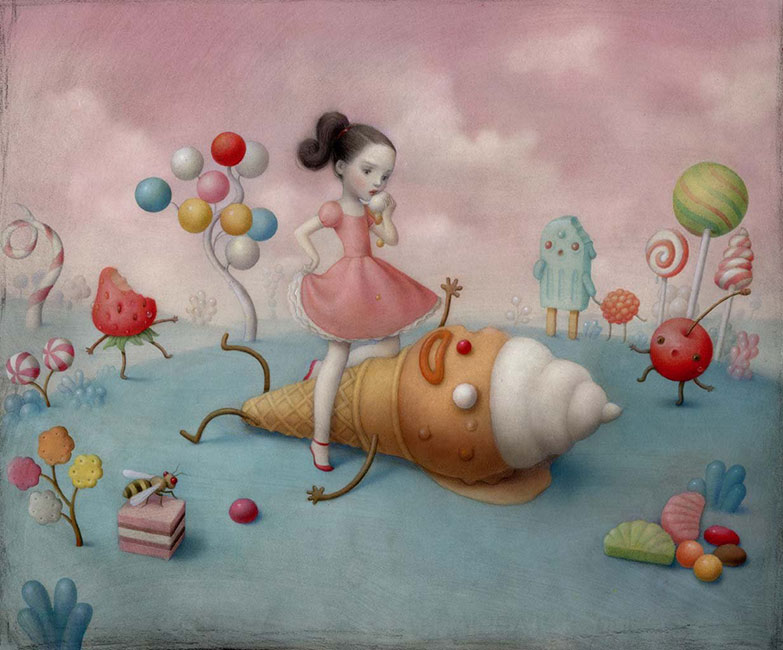 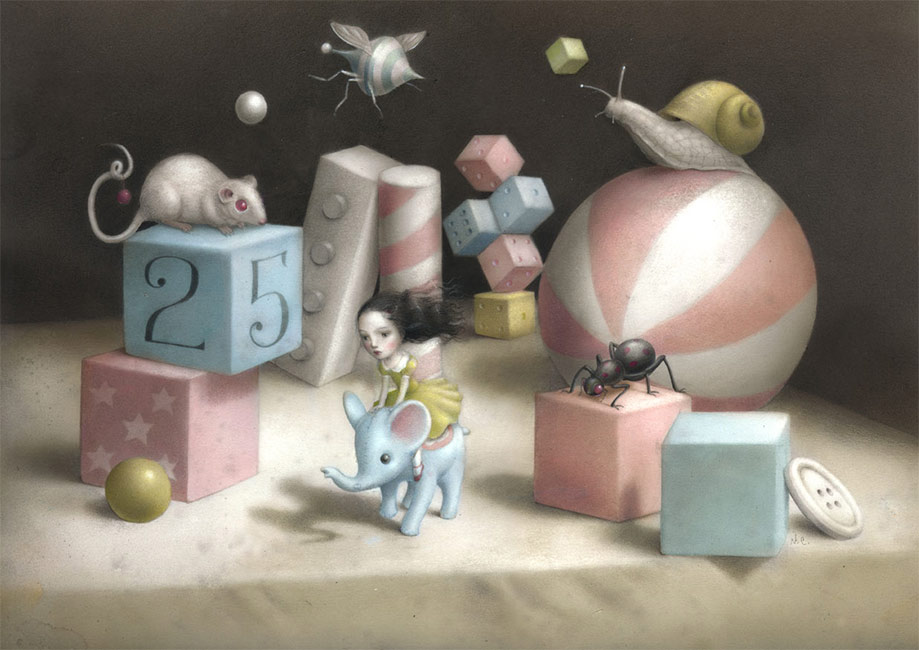 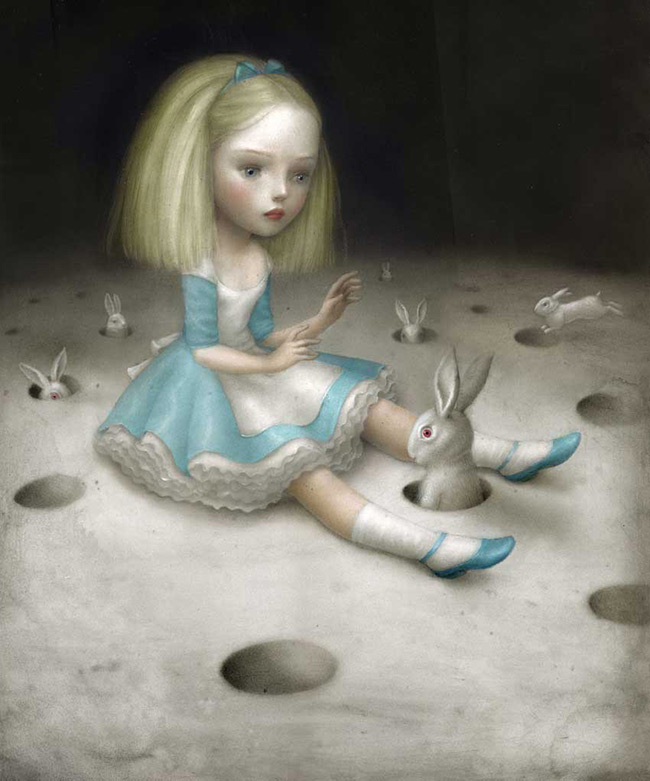 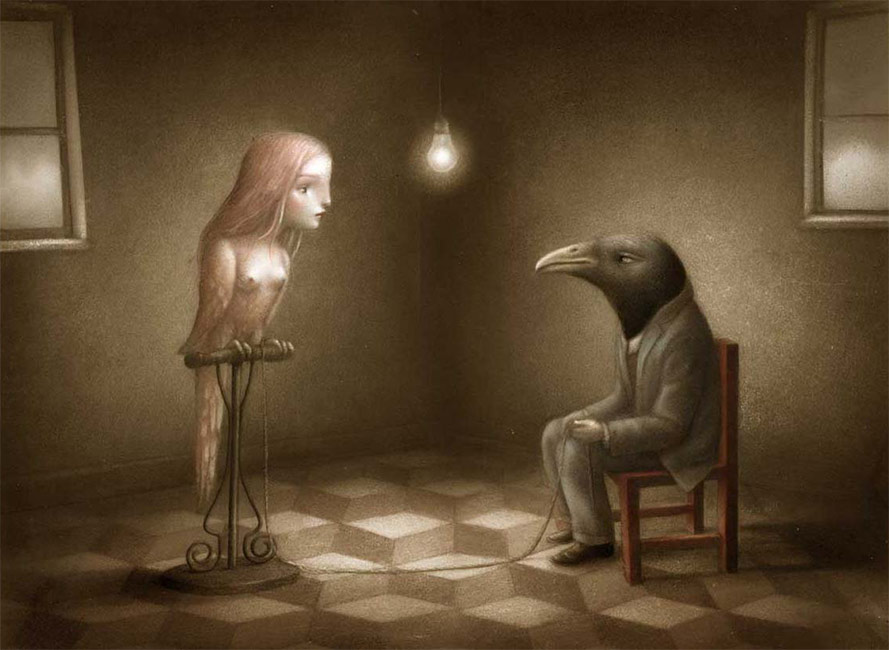 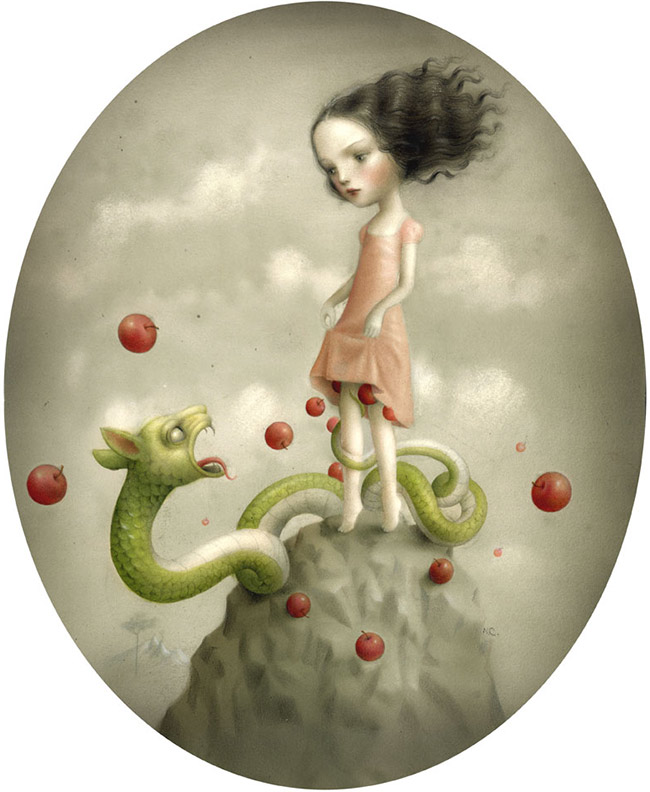 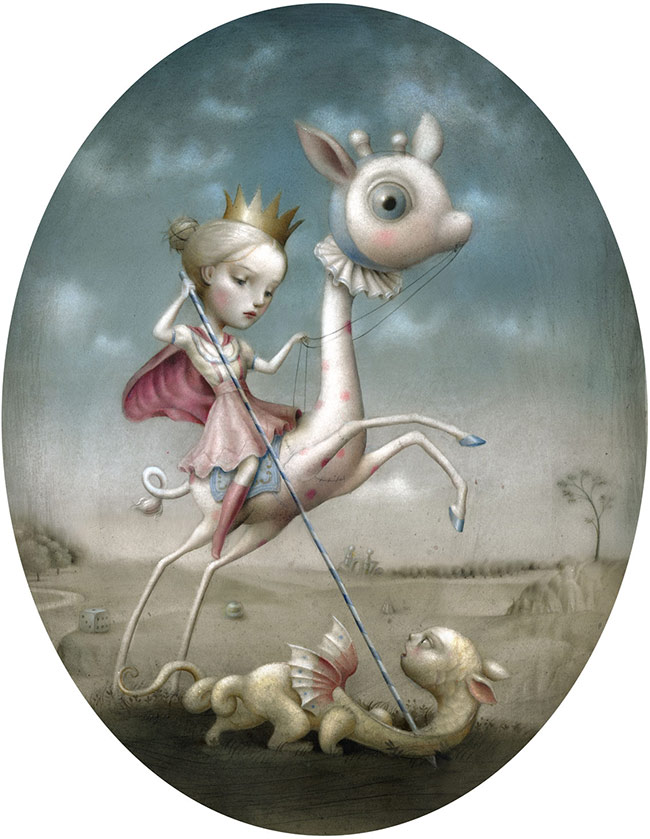 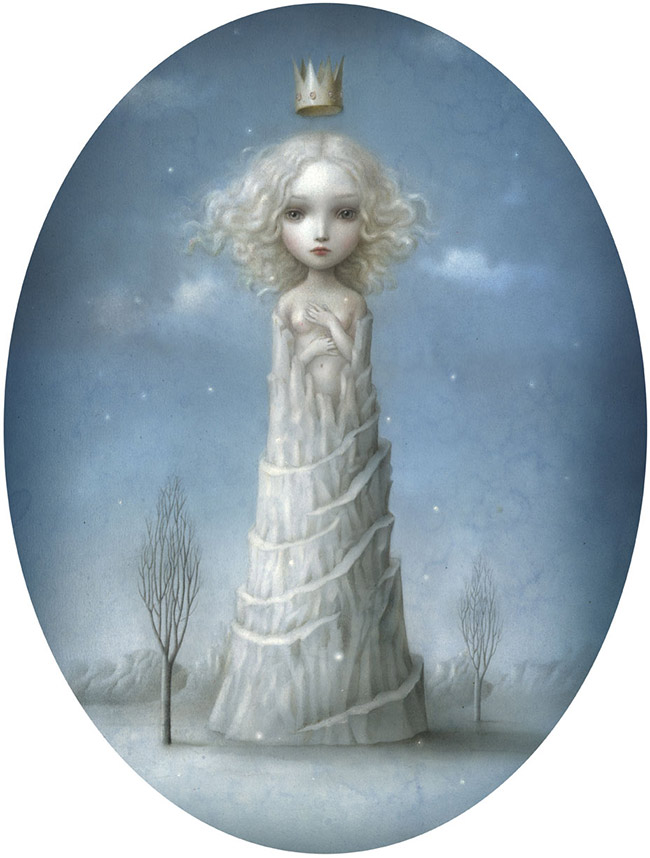