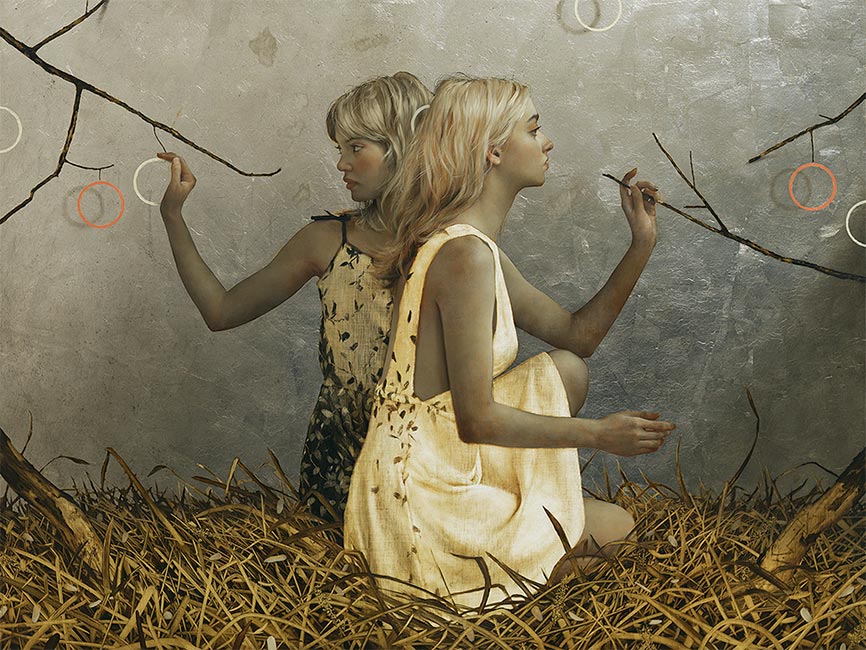 Born in rural Pennsylvania, Brad Kunkle spent his younger years exploring and romanticizing the beauty of the sparse countryside and the deep forests around him. From an early age he was drawn to the worlds of Maxfield Parrish and the Pre-Raphaelites – worlds, he says, “where a subtle, supernatural beauty seems to be hiding under the breath of women – worlds where something beyond our natural perception is waiting to be found.”

He studied painting at Kutztown University mostly under George Sorrels, who was taught by a pupil of the 19th century Academic painter, William Adolphe Bougereau. Filled with academic principles, Brad felt confident in his ability, but stifled by the structure of schools and dissatisfied with the boundaries of traditional imagery. In an effort to discover his own artistic sensibilities, he worked as a commission-based portraitist, and began an almost decade-long journey of continued self-instruction and independent study.

Brad was searching for an unnatural quality in his paintings, and it was ironically discovered by reducing his processes to the elements of painting he felt came most natural to him. His minimal palette is inspired by the grisailles of early European masters and the haunting quality of antique photographs and daguerreotypes. “Grisaille has a mysterious quality to it, and that mysterious quality is also at times carried into the way I will treat an object or a dress. Sometimes I like to give just enough information for the viewer to finish the details of what they are seeing.”

As a decorative painter in his mid twenties, he leafed entire walls in copper. He was beguiled by the shifting, life-like nature of the surfaces, and began to incorporate gilding in his work. This proved to fulfill the unreal quality he had been looking for to convey his moody, romantic ideas of human nature and ritual. “The use of gold and silver in my paintings serve two main functions –the first being symbolic. Gold and silver serve as symbols in many ways but to begin with, they are ‘material’ symbols in harsh contrast to the spiritual or intangible aspects of life. The shifting of the leafed skies and wallpapers are also symbolic of the ever-changing world we live in. Furthermore, gold is the single most controversial element in the history of mankind. It causes wars, brings death, happiness and beauty – symbolizes love, power, greed, and religion….it’s symbolic properties are just as malleable as it’s physical properties. The second function of the leaf is to react directly with the viewer. As one walks across a room or dims the lights, they are affecting the painting and the painting is affecting them. The paintings become a living, breathing thing to me when the leaf is shifting and the oil is quiet. The art literally becomes interactive and can give the work a supernatural quality. The use of grisaille, or an adaptation of grisaille against the leaf can give the sense of a very surreal space and unnatural depth within the paintings.”

In an old wooden box that holds his paints, he keeps a slip of paper with a quote from Pablo Picasso. “You must always work not just within, but below your means. If you can handle three elements, handle only two. If you can handle ten, handle only five. In that way, the ones you do handle, you handle with such ease, more mastery and you create a feeling of strength in reserve.” (Arcadia Contemporary)

“I think of myself as more of a symbolist or surrealist. There is more concept than meets the eye in most of my work. Realism doesn’t excite me enough to want to be a realist… but i guess some of my work appears simple enough to be considered realism.” – Brad Kunkle (beinArt Gallery) 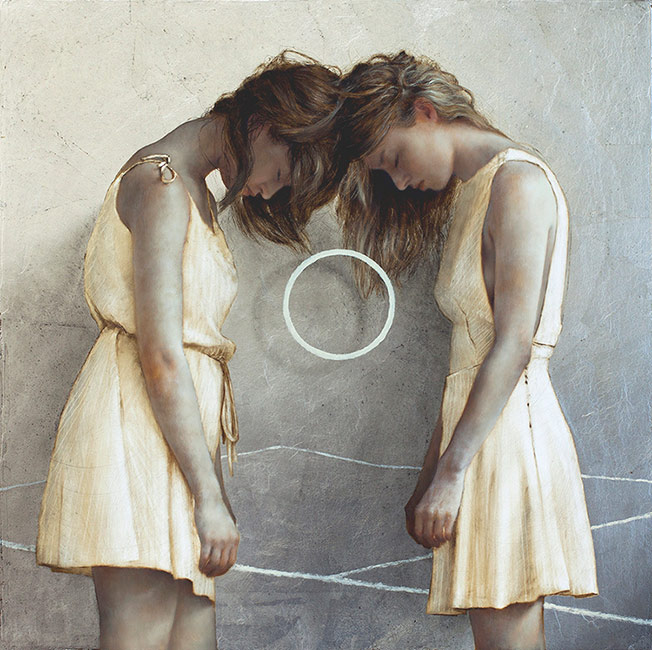 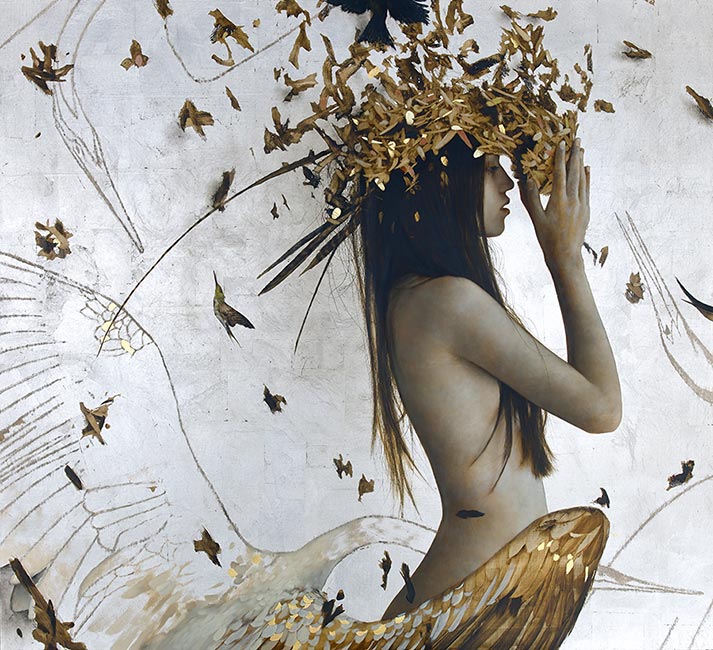 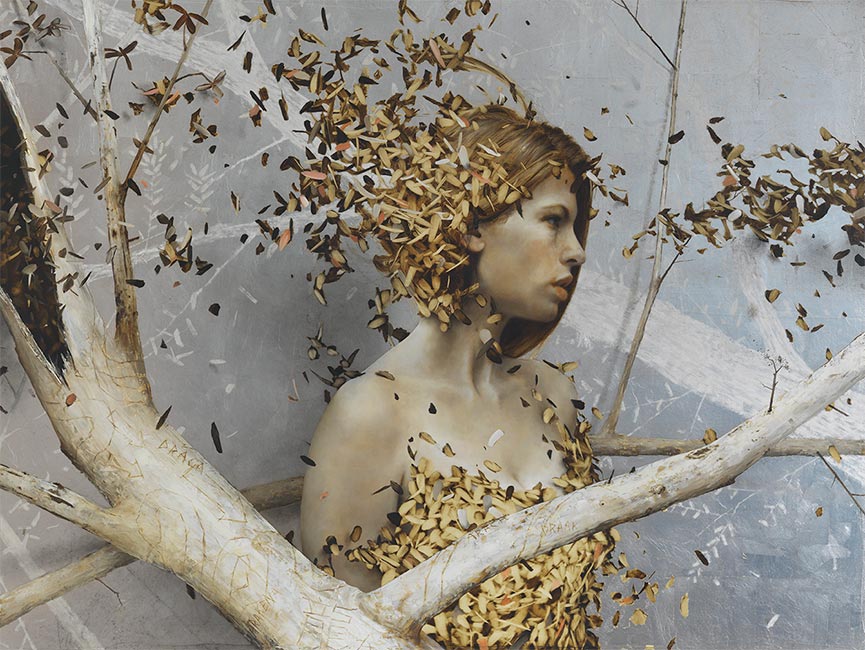 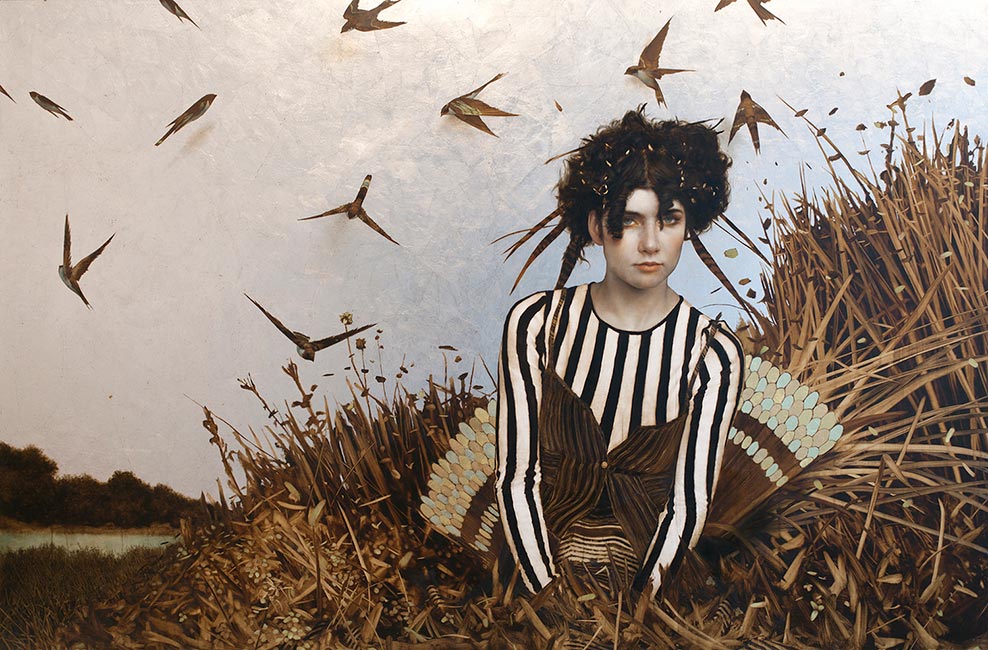 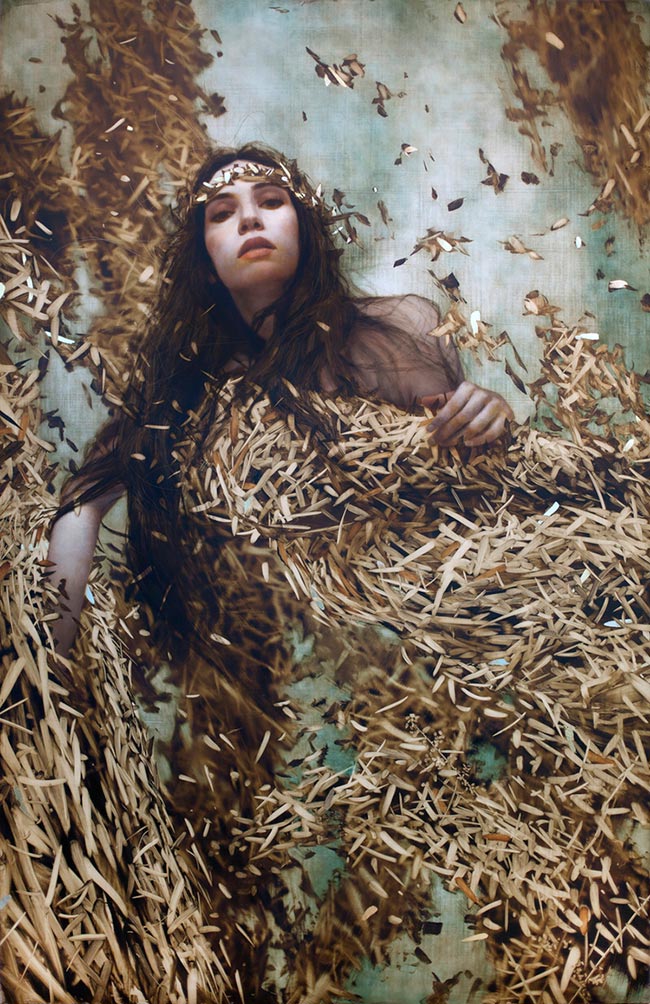 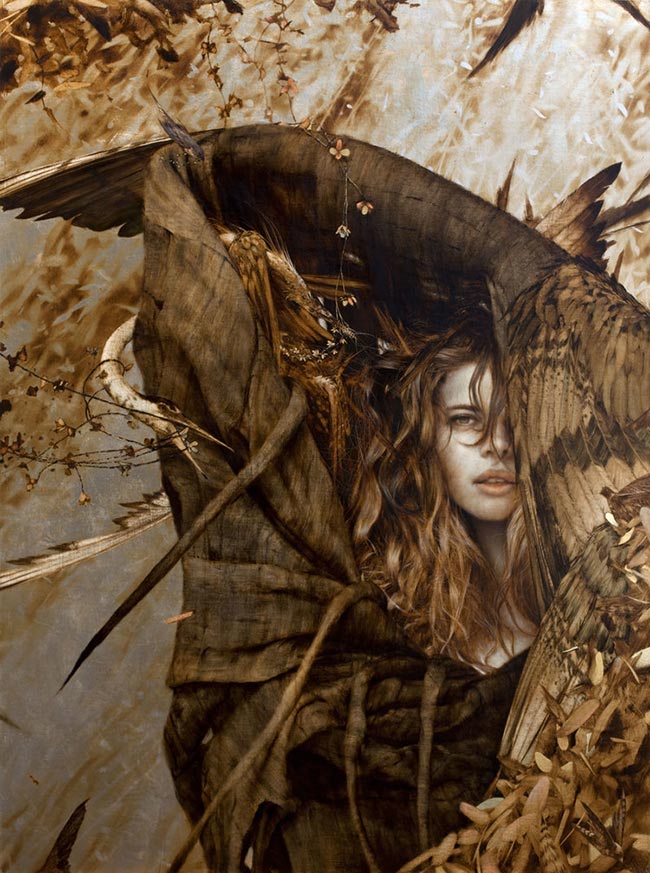 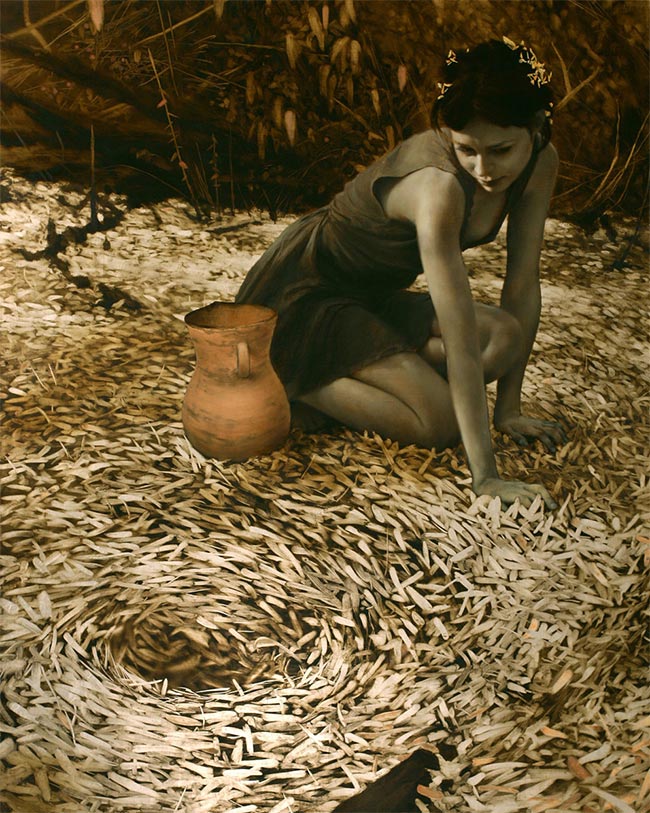 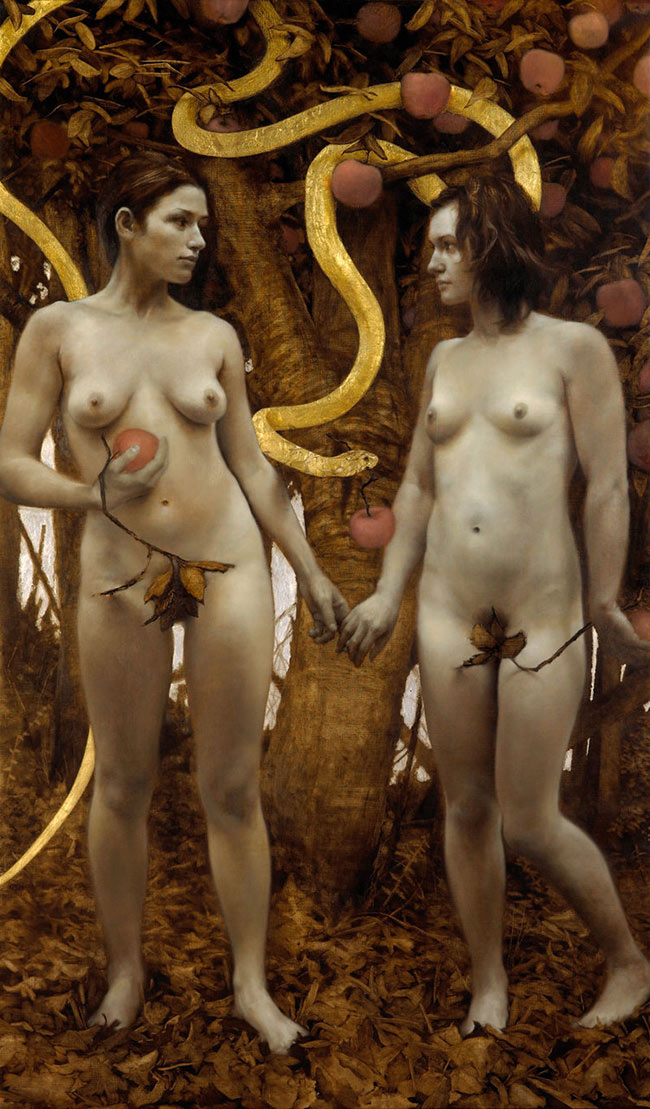 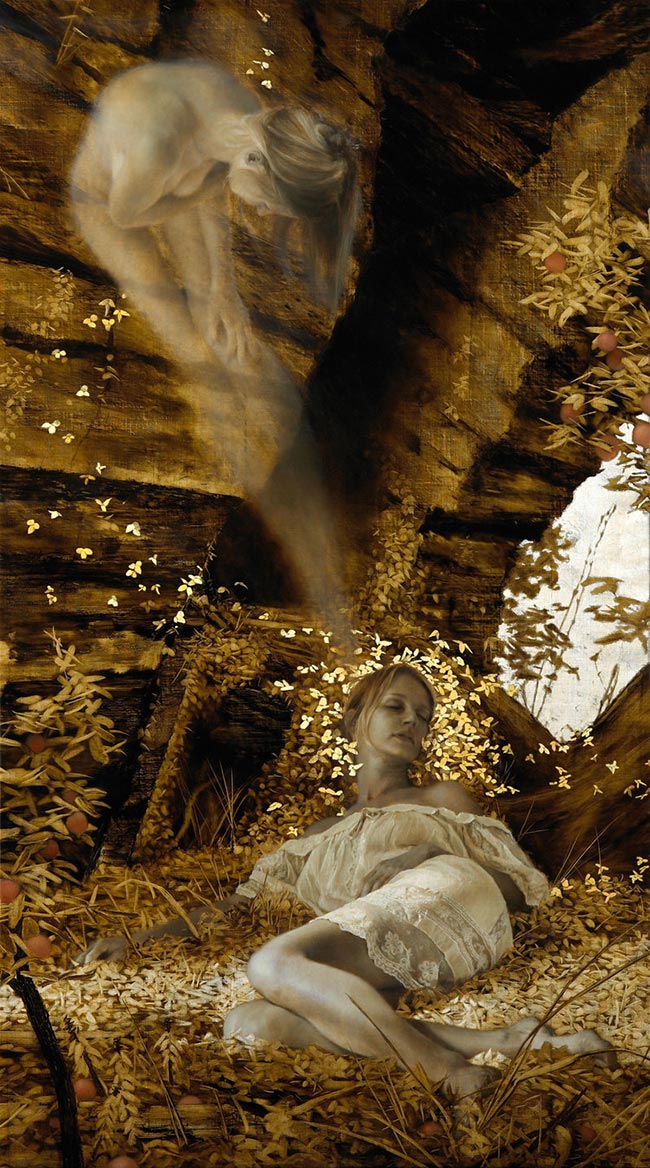 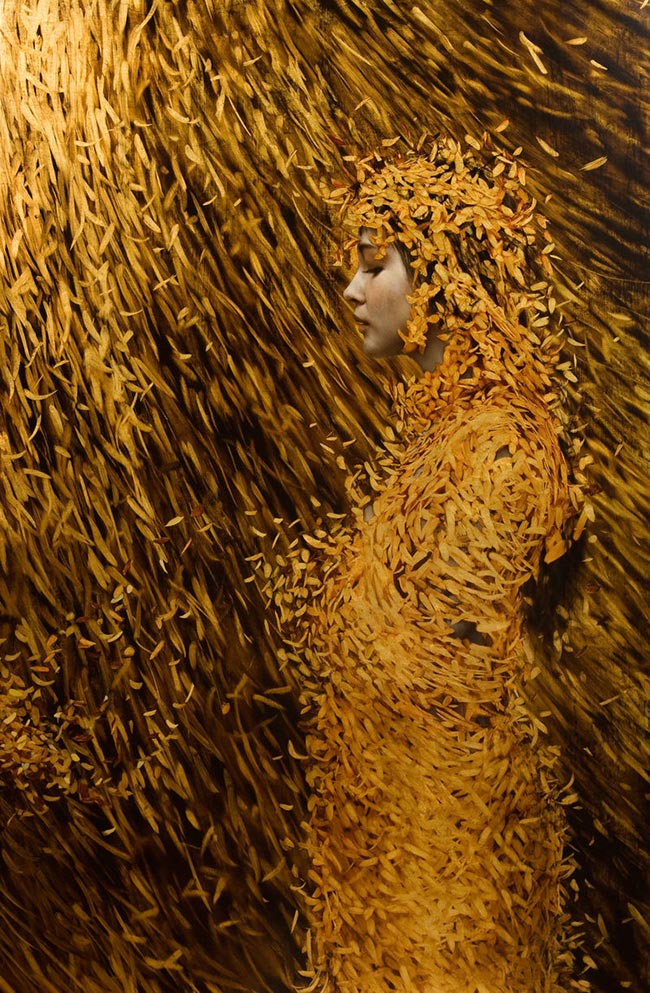 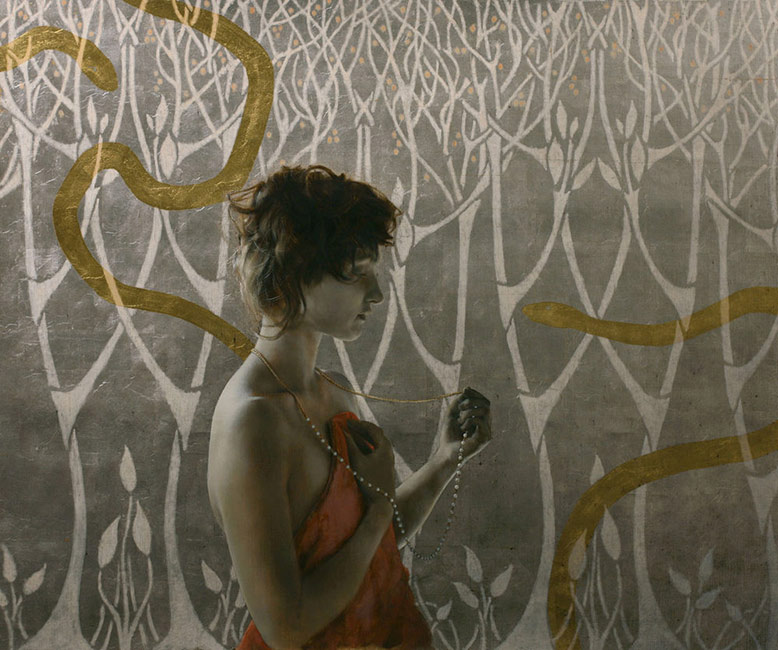 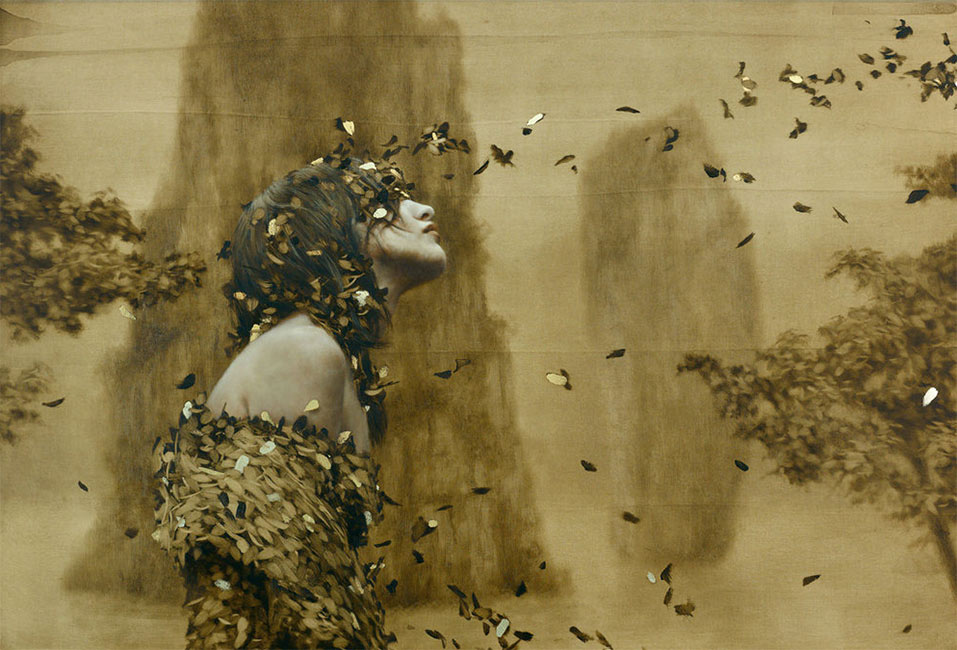 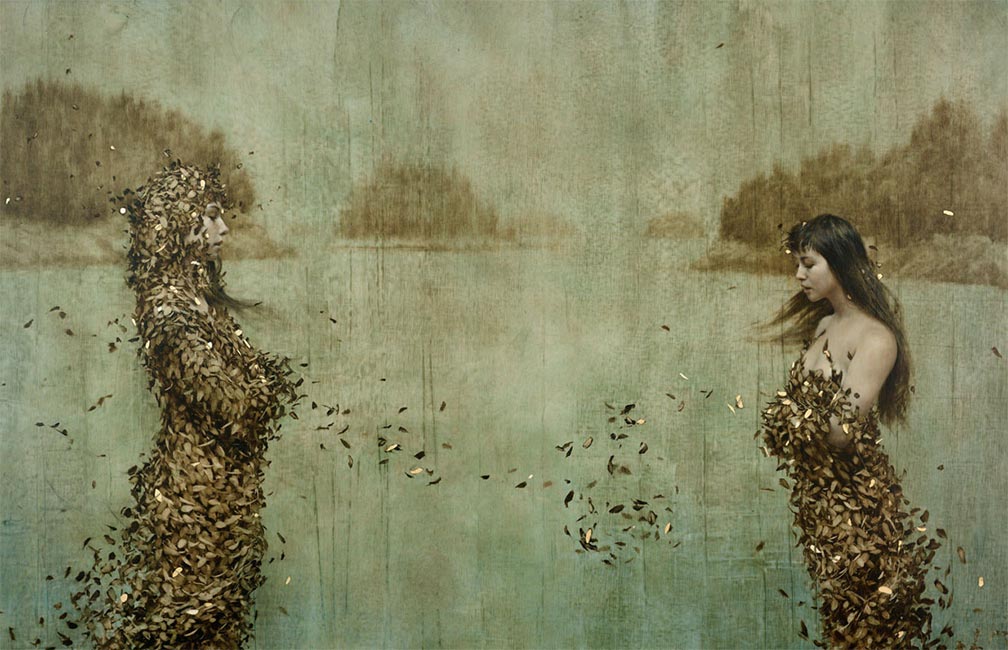