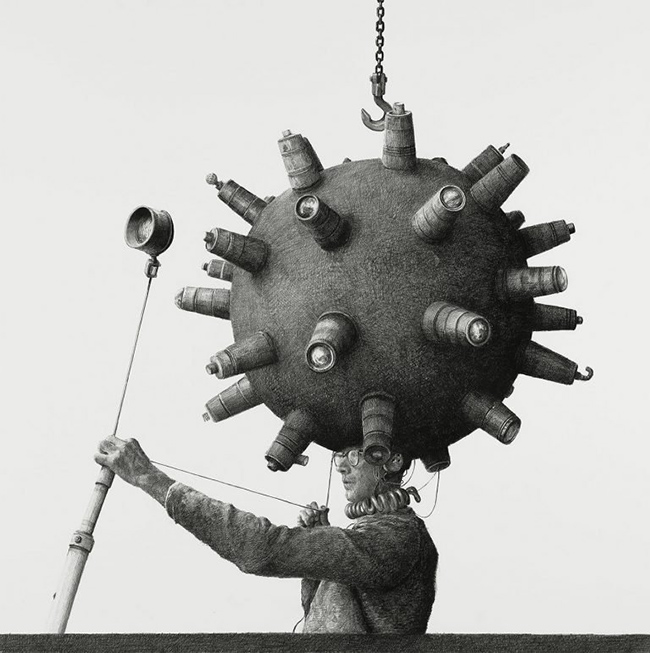 Ethan Murrow is an artist working out of Boston, MA. His drawing, video, sculpture and installation projects delve into the idealized and uncomfortable ways in which histories are told, retold and molded into grandiose narratives. Ethan received his B.A. from Carleton College and his M.F.A from The University of North Carolina, Chapel Hill. Recent solo museum shows include the Institute of Contemporary Art Boston, Museum of Contemporary Art Jacksonville and the Clay Center in West Virginia. Upcoming solo shows include the Currier Museum of Art in Manchester, NH and the Eleanor Wilson Museum in Roanoke, Virginia. Ethan is represented by La Galerie Particulière in Paris and Brussels, Slete Gallery in Los Angeles and Winston Wachter Fine Art in New York City and Seattle. Ethan was recently awarded the Stein Emerging Artist Prize by MOCA Jacksonville, participated as Artist in residence at Facebook Inc., was a fellow at the Ballinglen Foundation in Ireland, received a Massachusetts Cultural Council Fellowship and was included in the 2013 deCordova Museum’s Biennial with a three story wall drawing. His work is in many public, private and corporate collections and has been reviewed and published widely around the world. A monograph on his work came out in the fall of 2015 with the German publisher Hatje Cantz. His film project “Dust” with Harvest Films and wife Vita Weinstein Murrow was an official selection of the 2008 New York Film Festival. The Murrow’s also published their “mostly” wordless picture book, “The Whale” in Europe with Big Picture Press and in the USA shortly after that with Candlewick Press. They have two upcoming publishing projects in the works with Candlewick Press. Murrow is a Professor of the Practice at the School of the Museum of Fine Arts at Tufts University in Massachusetts.

“Kalaloch Lodge sits on a rough coastline in the Pacific Northwest, part of the Olympic National Park. A decade ago, I was entering the lodge restaurant and discovered a photo of my great grandparents from the exact same site. In the grainy image, they stand among their logging camp kitchen garden, looking stoic and overworked. I began to sand away at the sheen of the story of their American Dream and the camps they worked in, which were filled with labor strife, impoverishment, and bits and pieces of hard won success. The sheer scope of what happened in the West as populations from the East pushed to the margins of North America is a staggering history of discovery, ignorance, reinvention, loss, and the harsh transformation of a landscape and people. This narrative and the factual, idealized, absurd, and uncomfortable ways in which we Americans choose to craft tales about our country has defined what I navigate.

Many of the photographs, paintings, and films that deal with the early history of the United States are saturated with ideas of false hope and impossible perfection. The Country is particularly good at rendering a vision of itself that conveniently edits out the messy, unwanted and uncomfortable truths of our past. The Hudson River School painter Albert Bierstadt, for example, created a grand version of America that was part reality, part heroic invention, and full of a colonial, power-hungry view of the country. Bierstadt has been a frequent target of admiration as well as cynical reference in the drawings. I nod to these masterworks, recognizing that the ambition and possibility of the United States can be seen within these depictions of drama and wonder. Many are resampled and coagulated with individuals and moments that are at odds with the whitewashed sublime. Through a mash up of images, I hope to cut away at the neat and tidy narrative of progress and domination and create moments that deal with the abundant misinformation, deep confusion, genuine absurdity and billowing mass that has always kept this Country on its toes.

As our world leaks and creaks forward, landscape can act as the ultimate term and representation of the joys and foibles of our actions. Landscape is an aesthetic ideal, an edited view of reality that suits the maker—in essence, a fiction. For me, the word has come to define our use of images and stories to convince ourselves of who we are, what we know to be true, and what we wish was fact.

These drawings are re-tellings of histories, past images, heroes, and idiots. They are obsessively detailed puzzles and scenarios intended to honor a lineage of grand gestures and soapboxing and expose the deficiencies and dangers of doing so in the first place.” – Ethan Murrow (Monograph Essay Hatje Cantz Publication 2015) 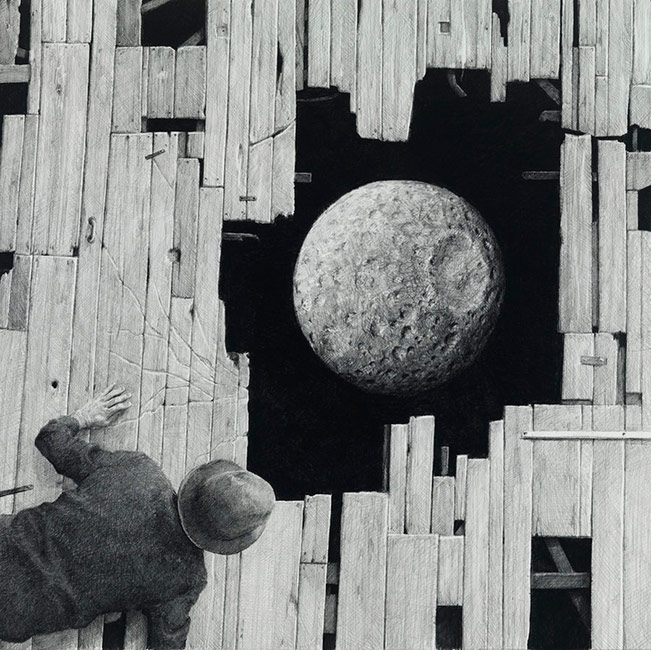 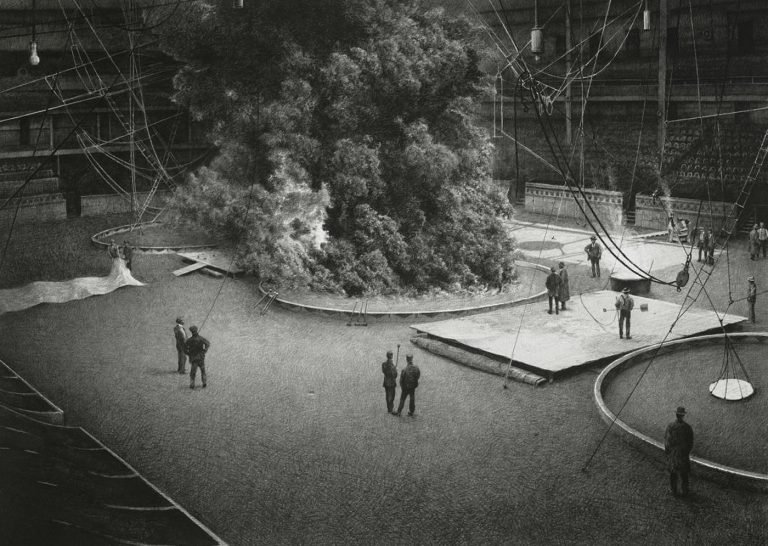 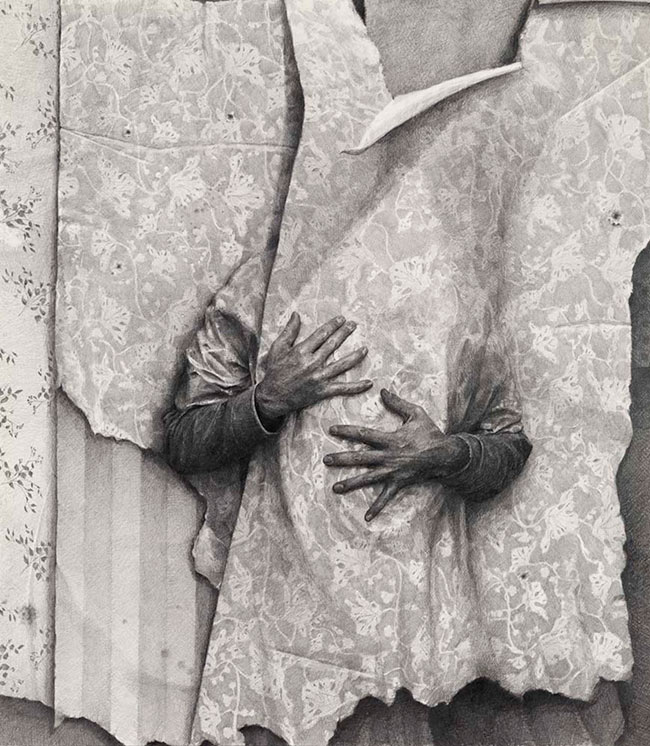 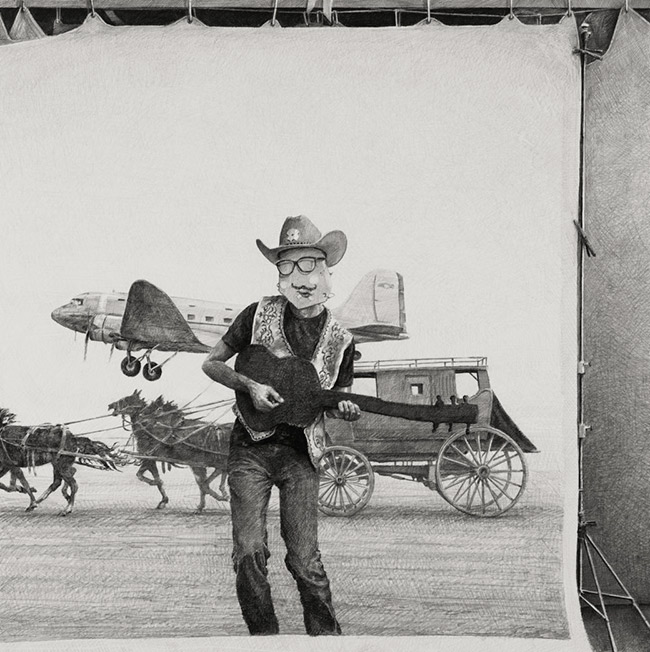 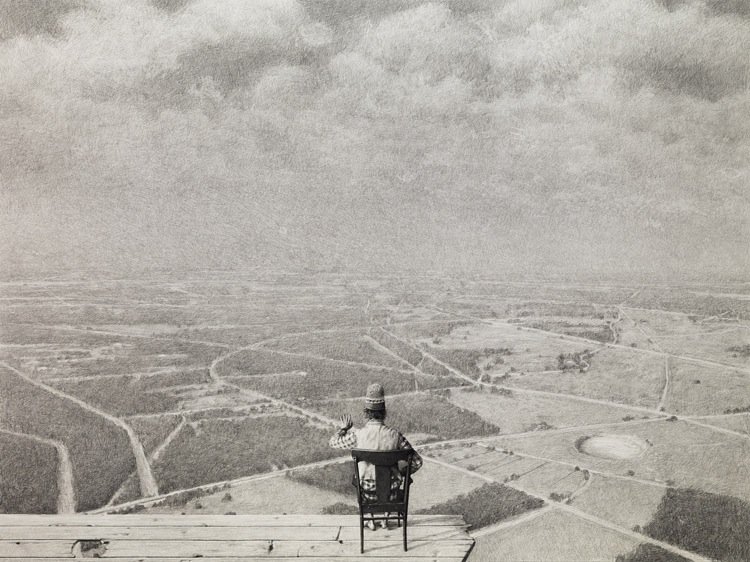 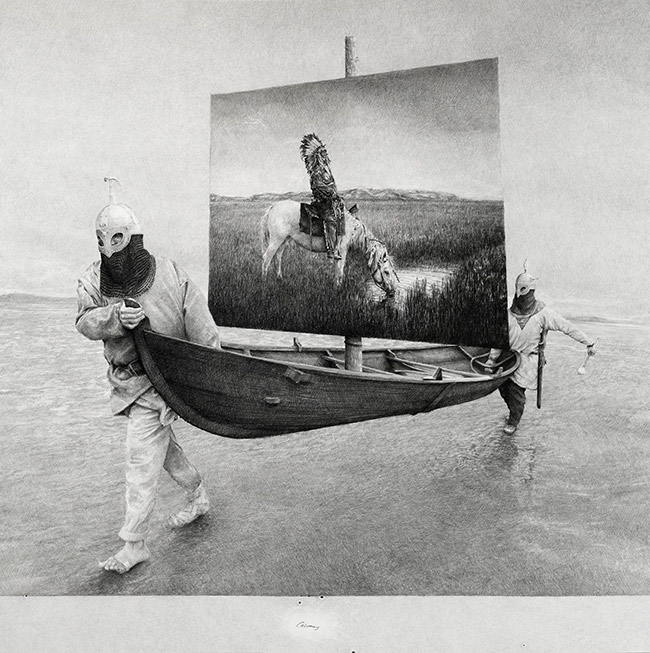 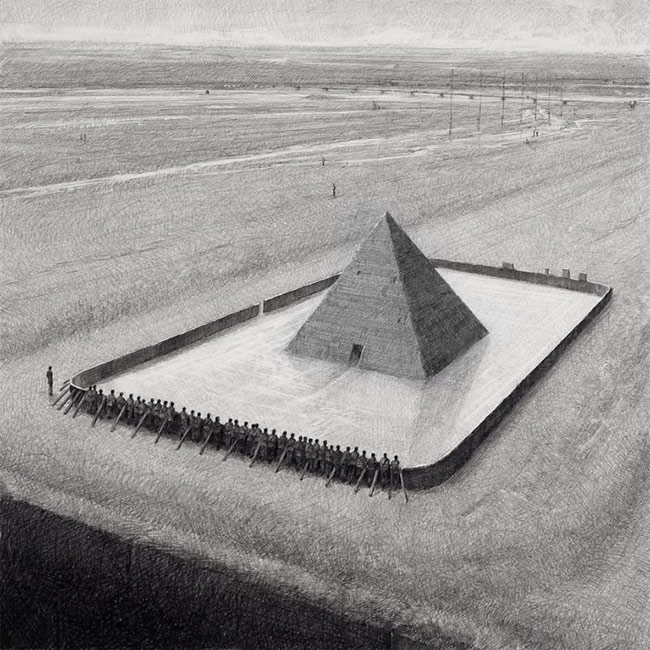 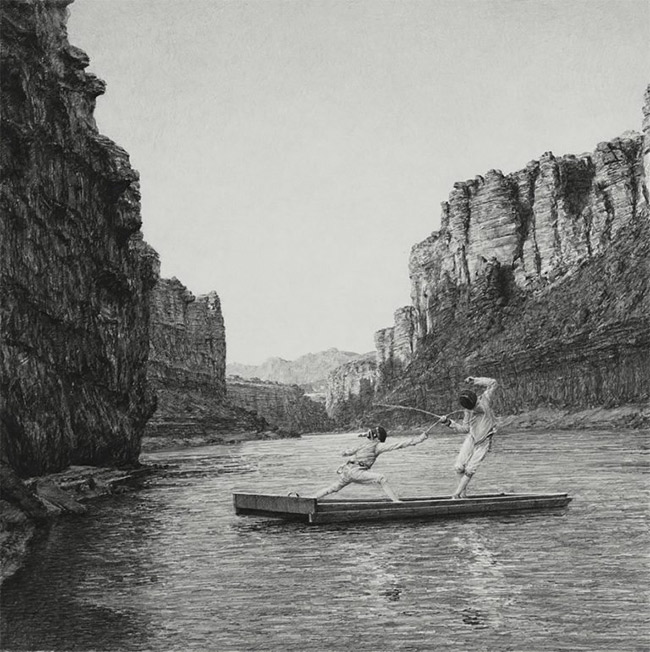 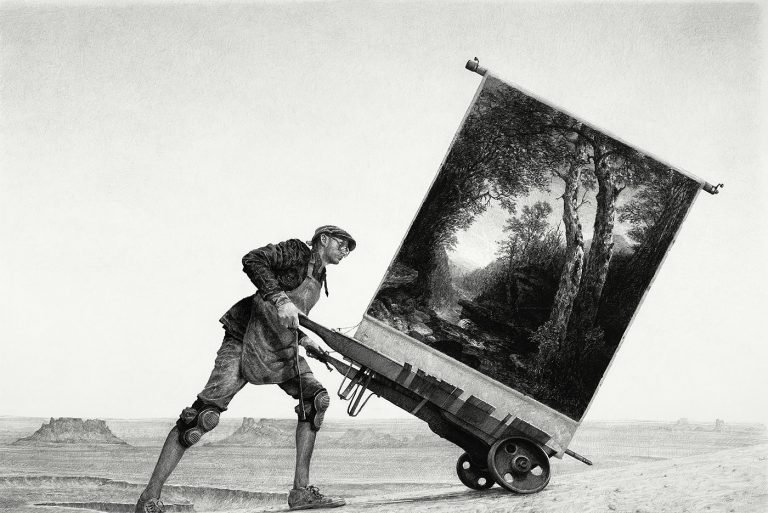 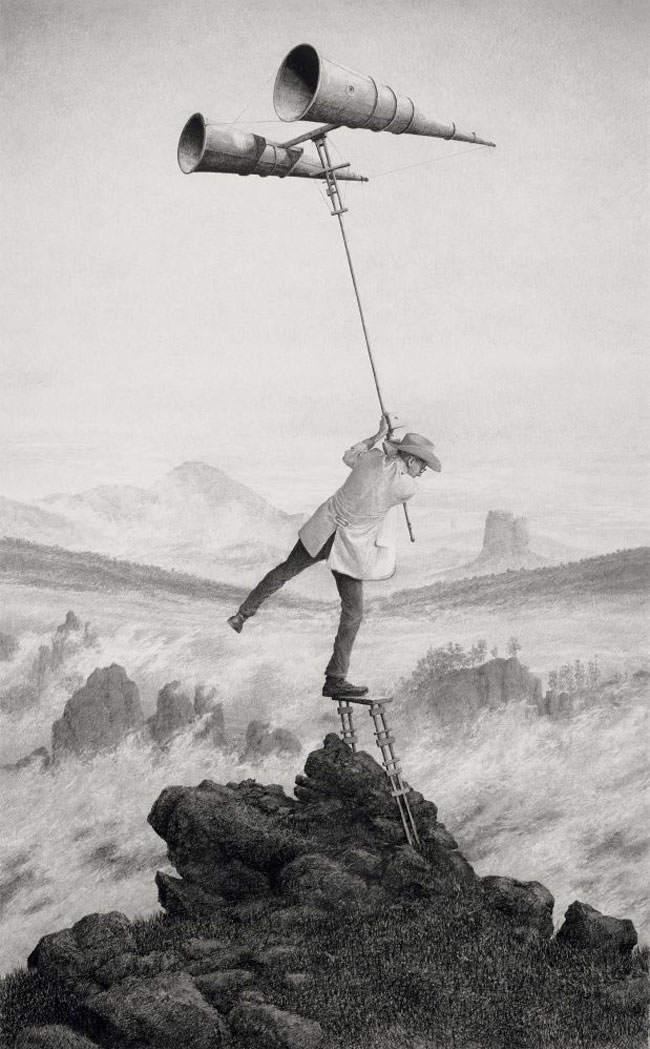 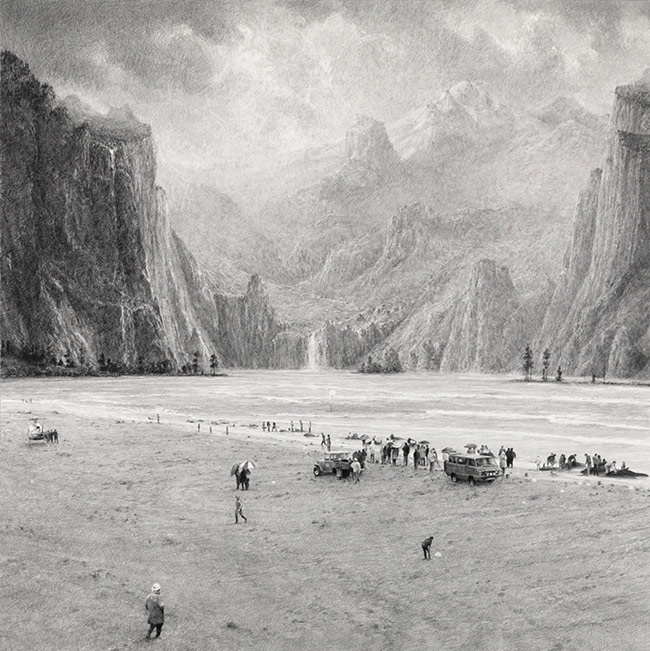