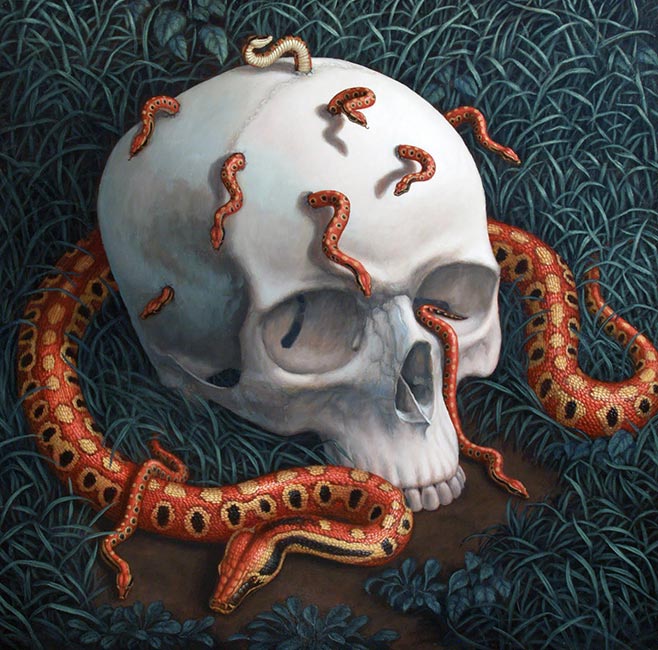 Sandra Yagi was raised in suburban Denver Colorado, the oldest of a typical suburban middle class family. From an early age, she loved science, especially biology, and drawing.

Yagi’s parents instilled in her an ethics of getting a “useful” education because of their concern for monetary and domestic stability, a result of their internment with other Japanese Americans during WWII. Their definition of a “useful” education, included fields such as business, engineering or science. Art and liberal arts were out of the question.

Yagi therefore put art aside, obtained a Masters in Business Administration and stepped into the corporate world, putting in 27 years at major financial institutions. However, due to the pent up need to create, she took up drawing and painting again at age 32 while still working in finance.

She relocated for her employer and moved to Los Angeles, and then San Francisco. The creative and eclectic climate in San Francisco is a catalyst for bringing about the current direction of her work. She left the corporate life behind for good in 2008 and became a full time artist. She now works out of her studio in the South of Market neighborhood of San Francisco.

Contemporary culture, human folly and an obsessive curiosity for the macabre provide the fuel for Yagi’s subject matter. Her work is inspired by the natural sciences as well as by the classical drawing techniques of the old masters, including anatomical studies by artists such as Andreas Vesalius and Bernhard Siegfried Albinus. Yagi’s recent paintings incorporate anatomical imagery to explore the human psychological condition, such as cutaway skulls portraying our basic human drives and the thin veneer of humanity overlaying our animal nature.

“From an aesthetic perspective, I love the beauty of skeletons, whether they are animal or human.  If you look carefully, there are no hard angles anywhere on a skeleton; instead, there are elegant and subtle curves.  Skeletons, especially human skeletons, are the symbol of mortality.  An image with a skeleton dancing or having sex is a wonderful contradiction; here you have a symbol of death partaking in an activity that is the essence of life.  To create something that is supposedly dead and make it appear to be believably alive is a wonderful challenge.” – Sandra Yagi (SF Art Enthusiast) 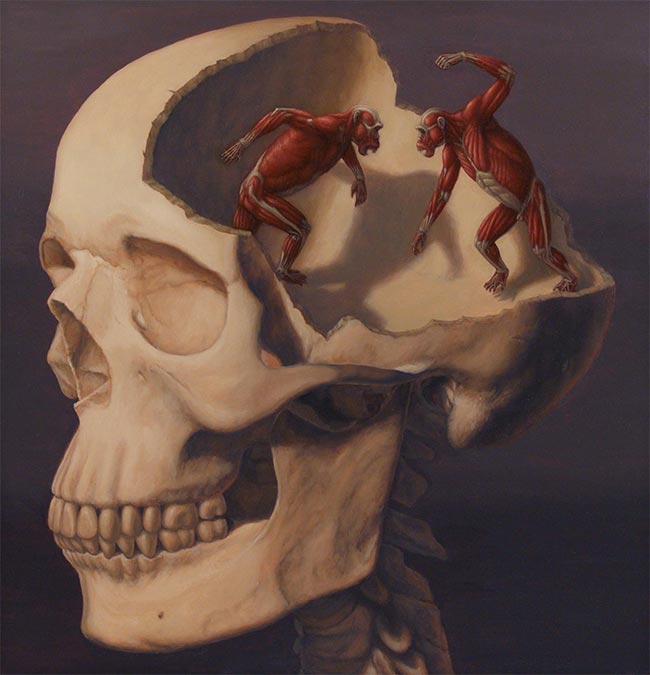 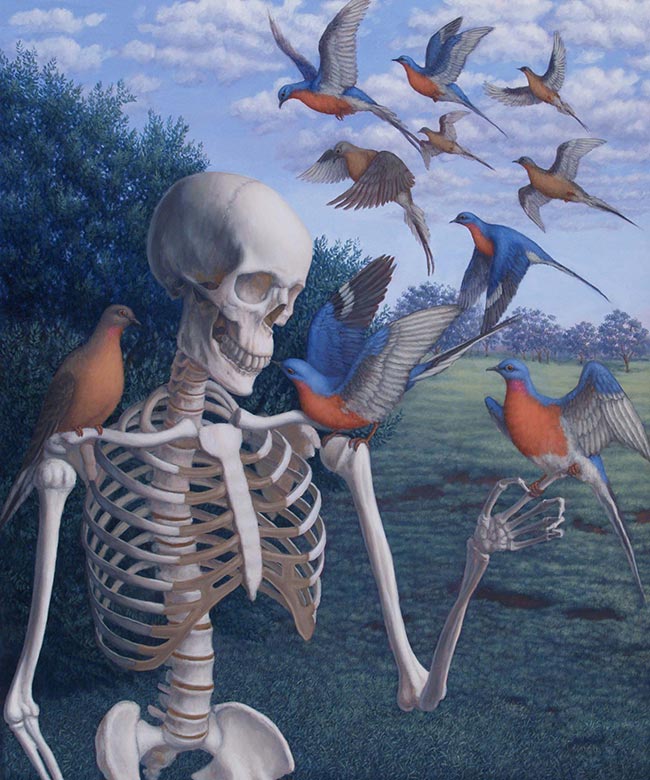 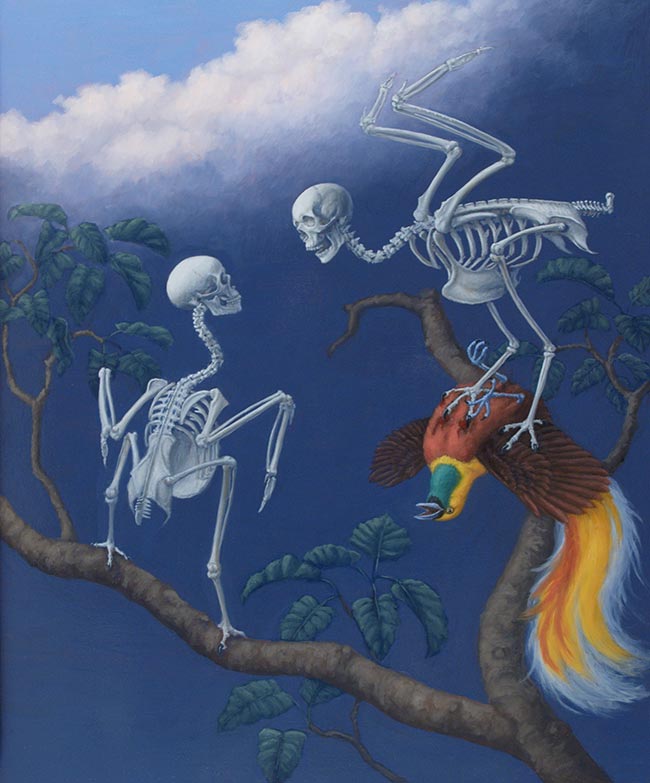 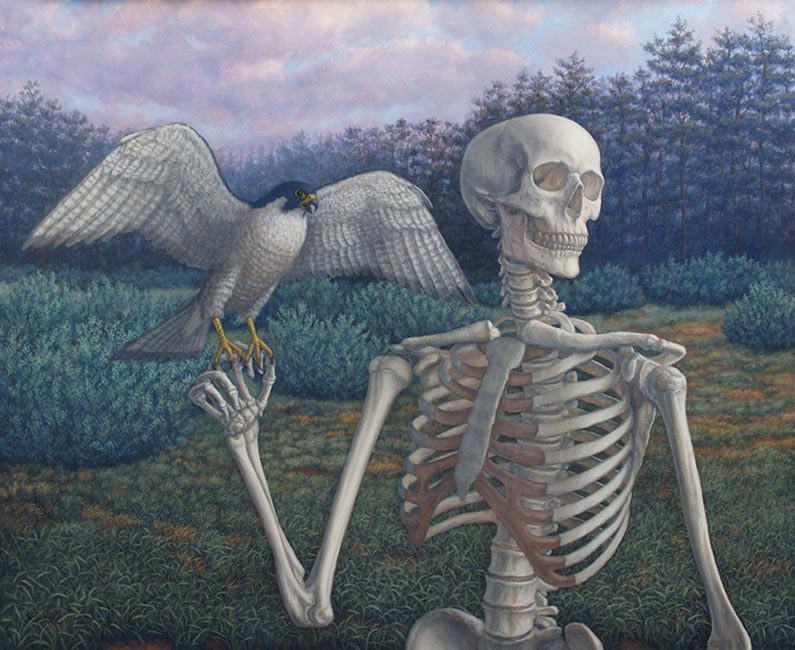 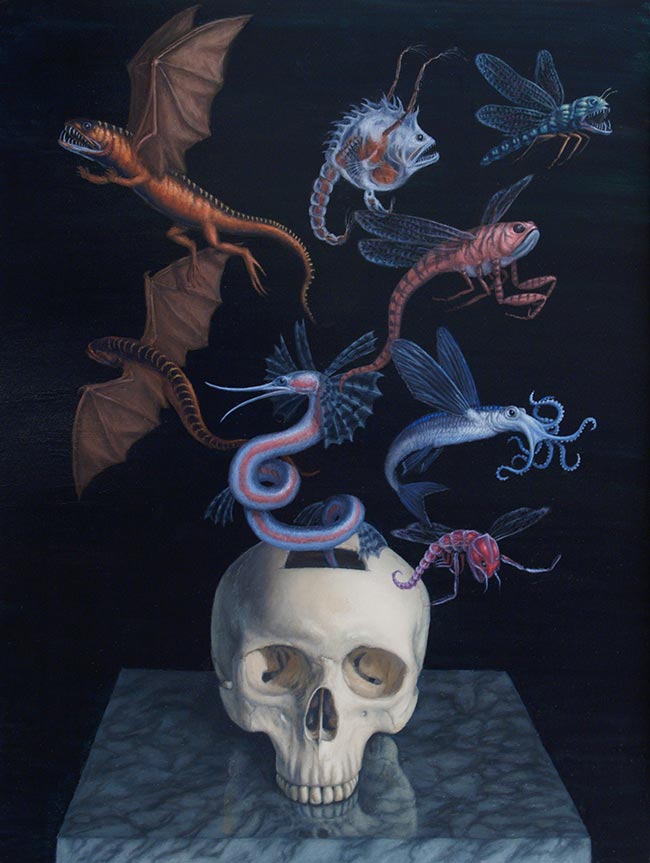 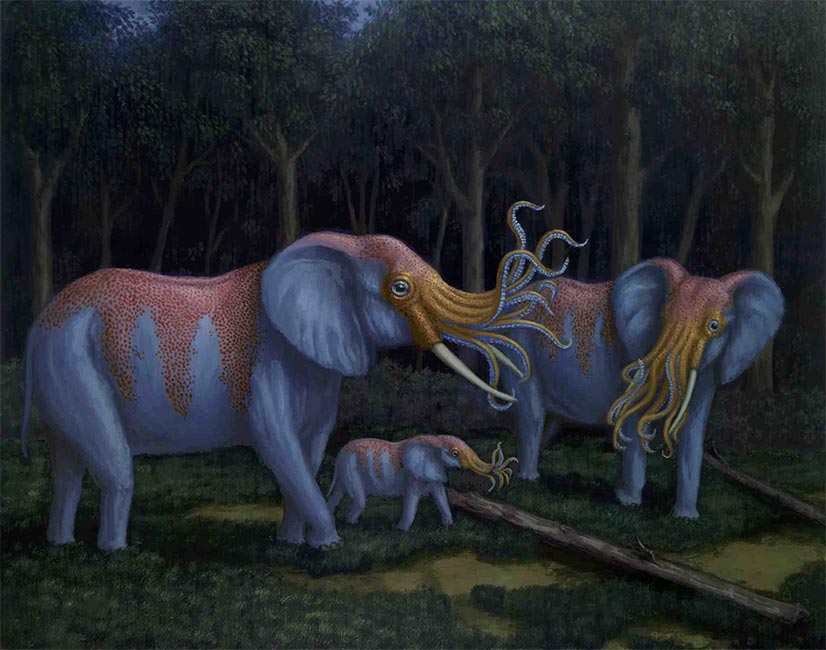 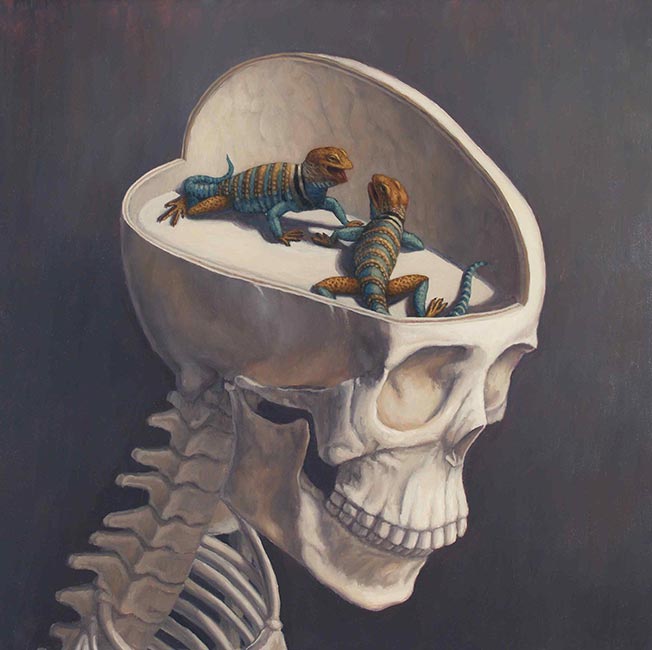 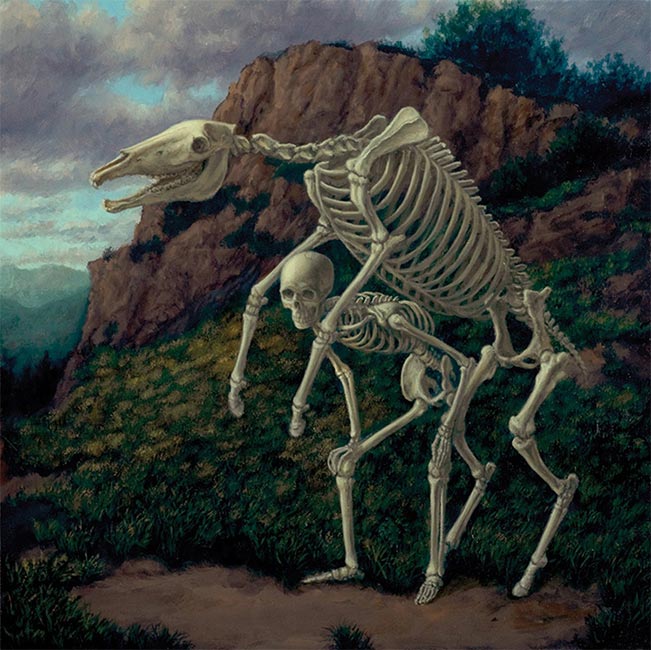 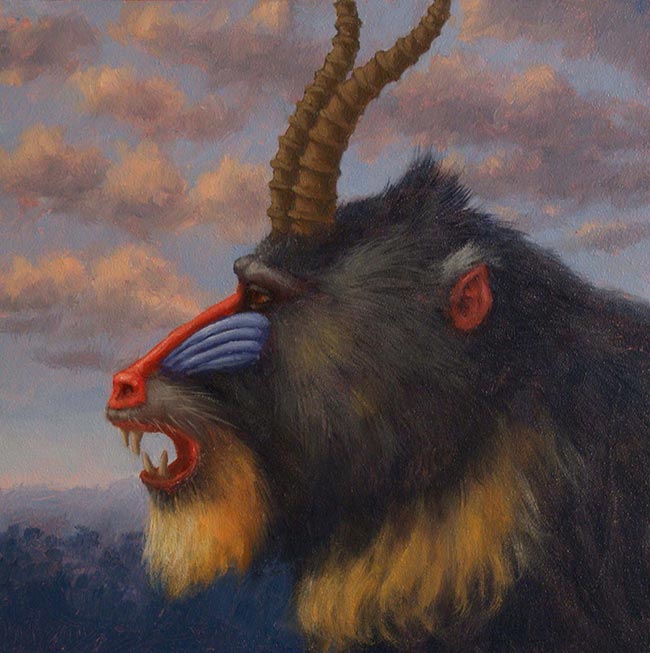 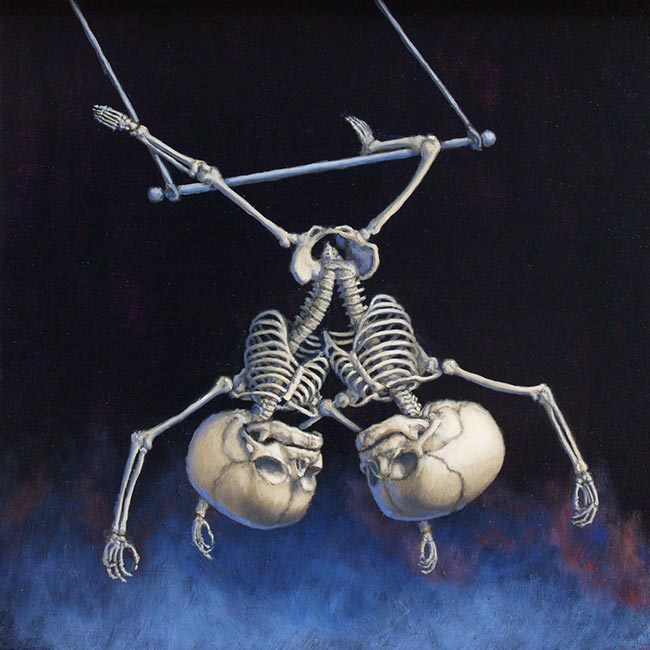 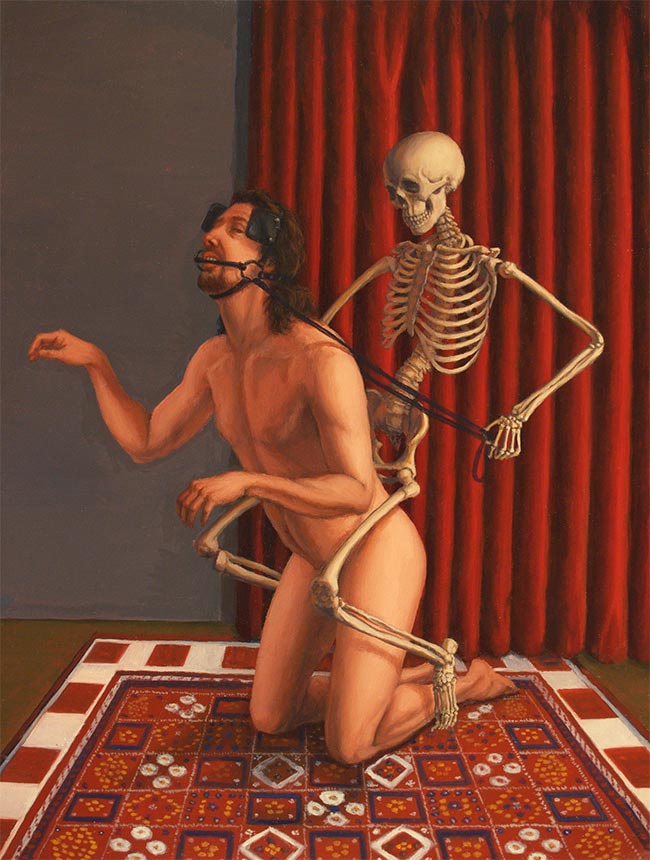