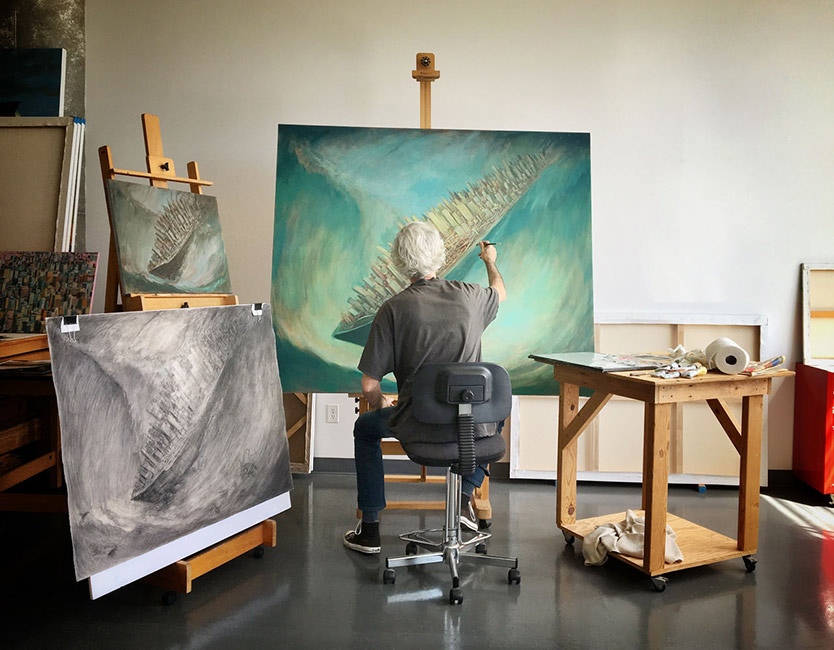 ‘The Road Ahead’ by Michael Kerbow

I used to feel self-conscious if I told someone I was a painter. Compared to professions like teaching or medicine, pursuing art seemed self-indulgent as everything revolved around my interests, or what I wanted to make. Why would anyone care about something I made? What benefit did my art offer them? It seemed selfish to want people to see my work. But with time, I came to understand my art does have merit. In fact, it now seems selfish if I were to make art and never share it with people.

I believe all art has something to offer. It allows us to experience new things, and expands our awareness of the world, and each other. It’s a means to communicate thoughts and emotions that simply can’t be conveyed through verbal language. Art can bring us closer together, and more importantly, show us what it is to be human. 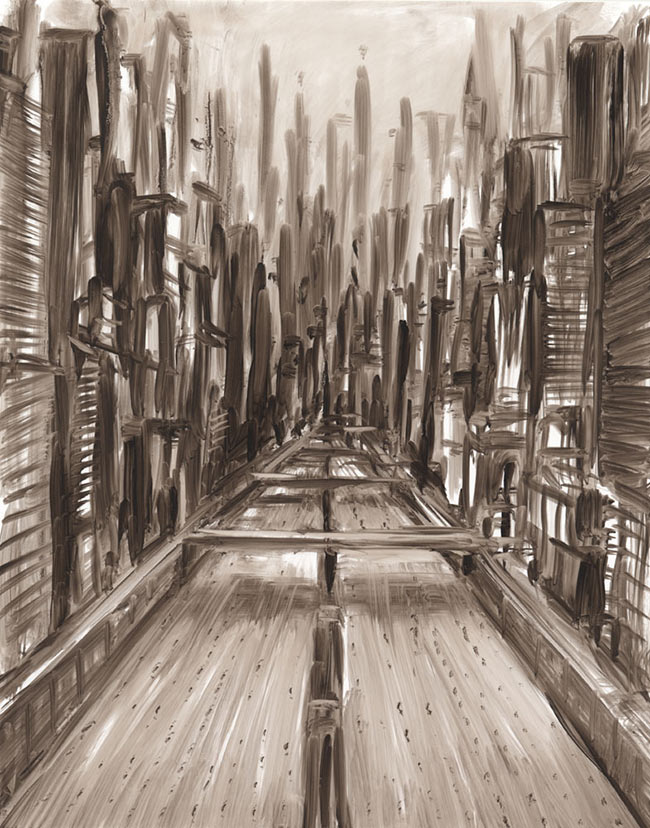 I think the role of the artist is to create work that encapsulates their respective time, and reveal what they see happening in the world. Because they are so attuned to their surroundings, artists can see ‘a bit further down the road’, and perceive where things may be headed. In other words, artists can be oracles.

When I look around today, I see some things that concern me. Modern society seems to have an insatiable appetite to consume everything in sight. It’s not clear what will be the ultimate consequence of this activity, but the planet is already showing signs of the negative impact. I believe man-made climate change to possibly be the most important issue we face today. And yet we aren’t sufficiently changing our current ways of being. Instead we appear to be addicted to this non-sustainable paradigm, and it is leading us towards a dark, uncertain future. 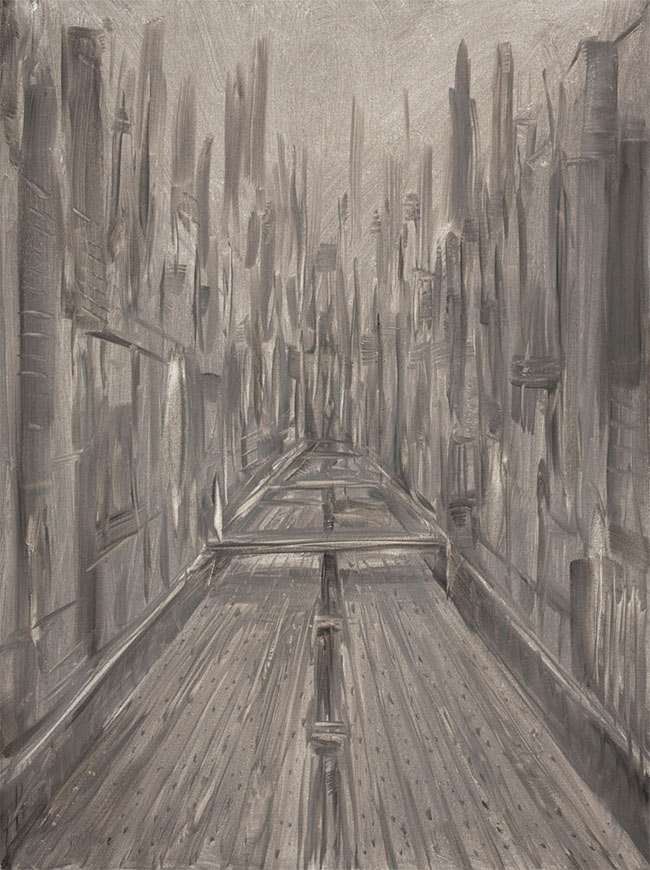 How would this look as a painting? I decided to make a few visual studies to develop my concept. I envisioned a vast metropolis, with towering skyscrapers interwoven with roads and tunnels. The scale of this city would be so immense as to dwarf its inhabitants. The main focus of my painting would be an enormous boulevard full of traffic flowing though a deep, urban canyon. The overall perspective would recede towards a central point far in the distance. This vanishing point would be the future that awaits us.

After deciding on a composition for my painting, I began preparing a large canvas. I wanted it to be big enough to engulf the viewer. My intention was to have the viewer feel as if they stood within a wide abyss, with skyscrapers looming overhead, and a river of traffic below their feet. The scene would feel unsettling and sublime.

I imagined a somber palette for this piece. I started by applying a wash of warm gray onto the bare canvas. I then began sketching out my composition with a black grease pencil. Normally I use charcoal or a graphite pencil for my under-drawing. But in thiscircumstance, I found the grease pencil smeared nicely with solvent to produce a wonderful, moody sfumato. It made the metropolis feel mysterious and engulfed in a dense smog. 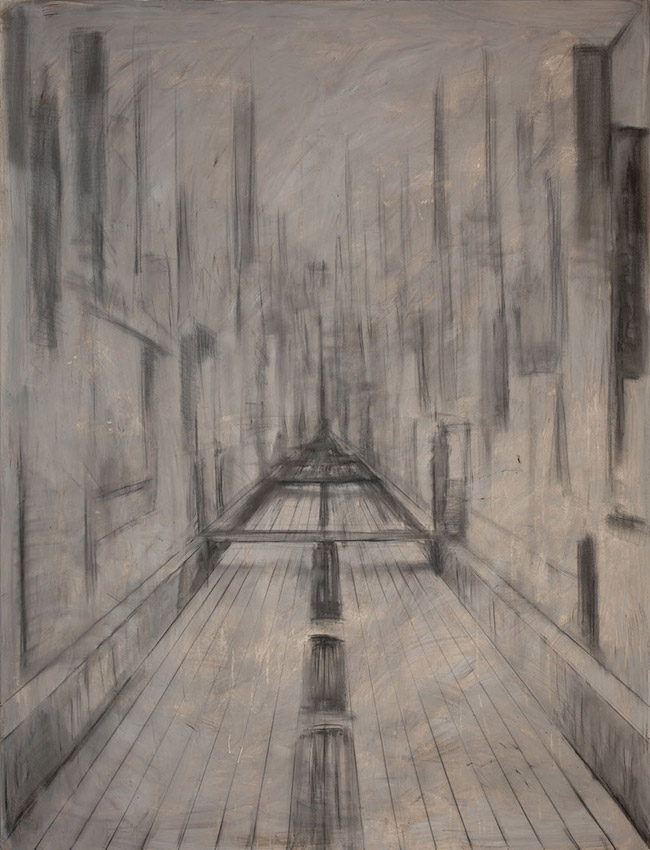 It was at this point that I wavered. I had intended to infuse my painting with a lot of intricate detail. But I discovered I liked the looseness of my underpainting, as it captured the mood I was after. I decided to put my painting aside for awhile, so I could figure out what to do next.

I began working on an ink drawing. I wanted to see how much detail I should inject into my painting. As the drawing progressed, it became increasingly complex. I added more and more detail, until it became tiresome to work on. Rendering every window of every building, and the vehicular traffic was burdensome. I eventually had to force myself to complete the drawing, but in the end, this process was worthwhile. It helped me recognize how some detail could be beneficial for conveying scale, and a sense of awe. But too much detail would become stifling. 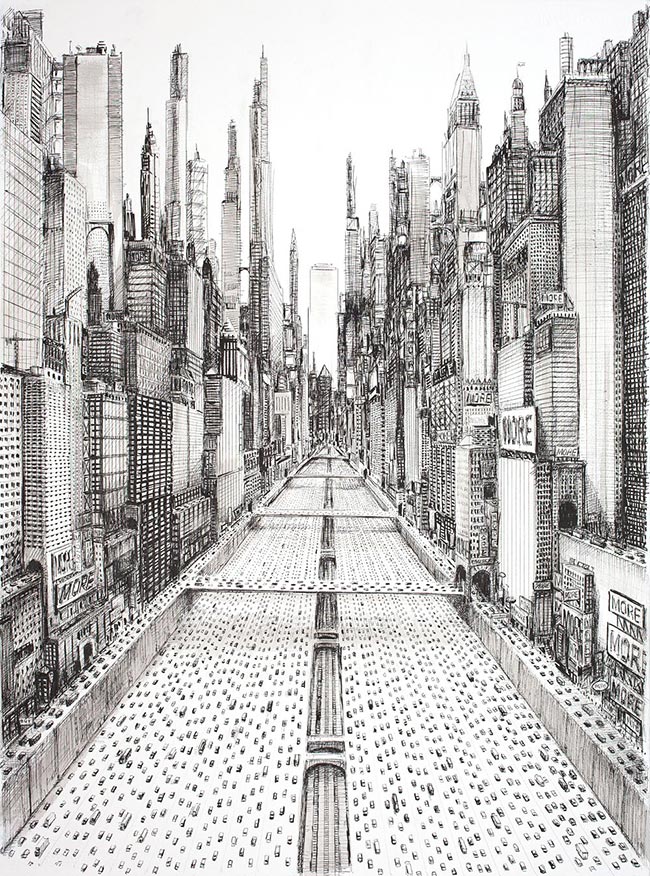 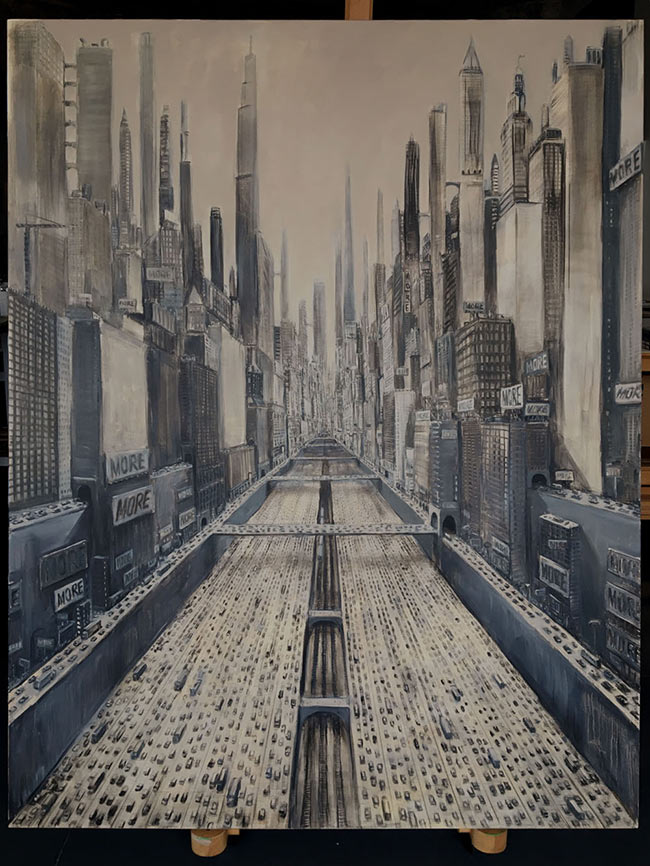 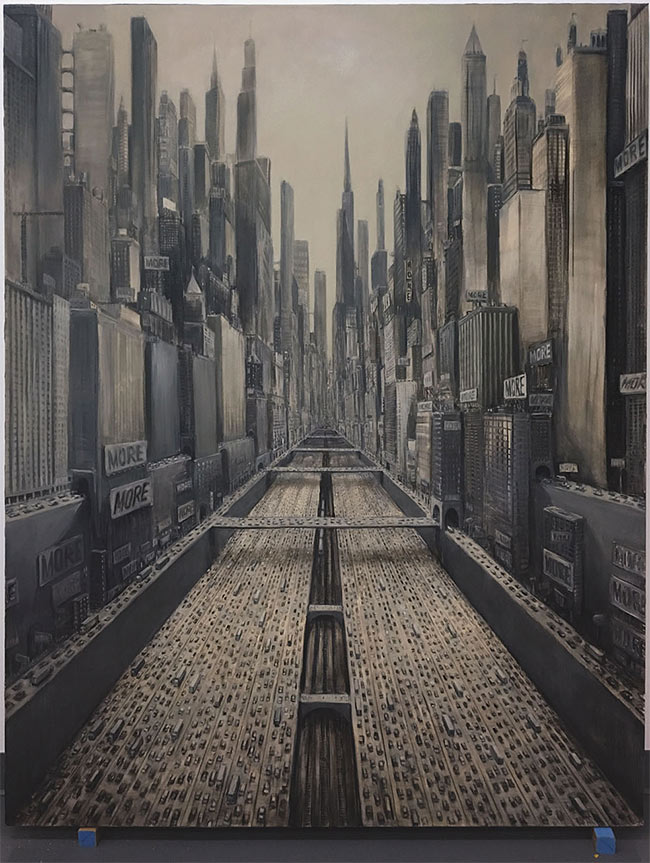 I resumed working on the large canvas I had previously put aside. Referencing the drawing I had just completed, I began to solidify the shapes of the buildings and roadways in my painting. I tried to refrain from becoming overly illustrative. I wanted my painting to have a balance of looseness and delineation. I introduced some details, like flagpoles and water towers on the buildings, and different shaped vehicles on the roads. I even added a few tiny people. 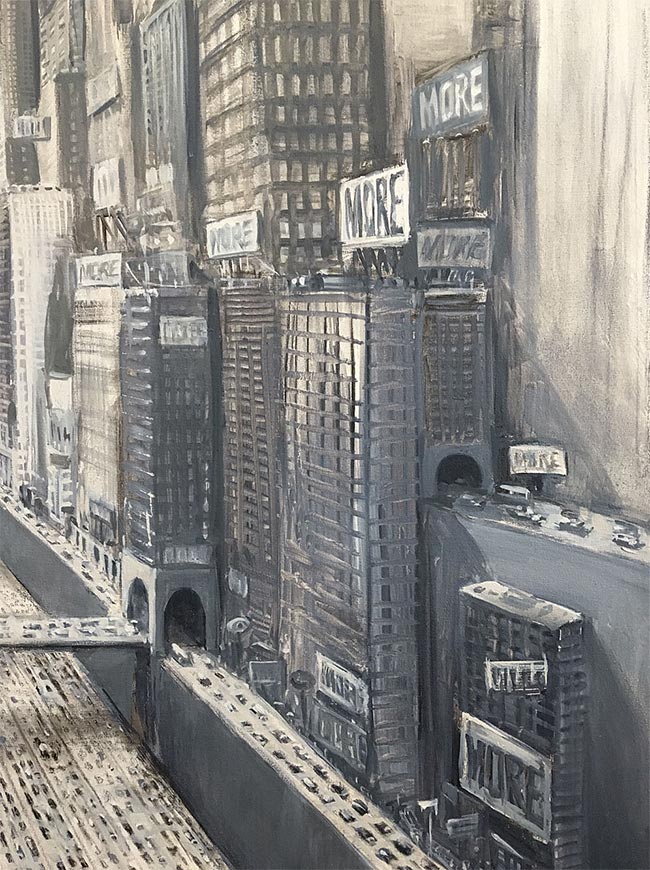 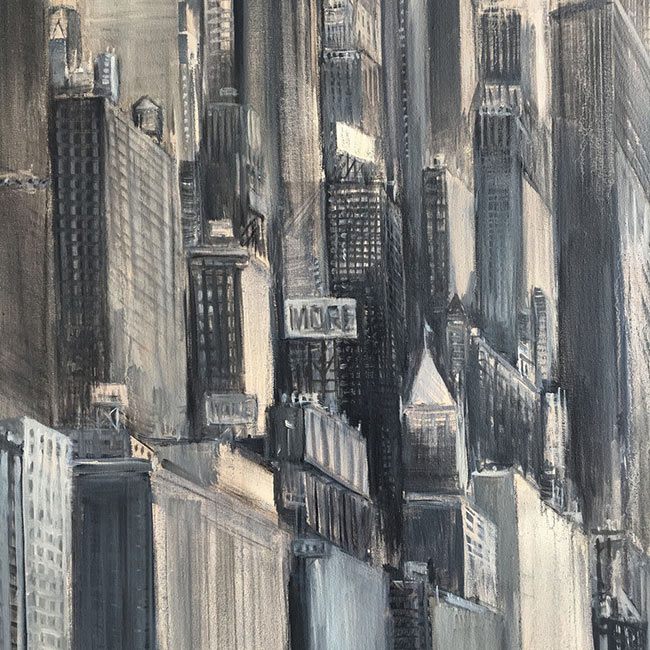 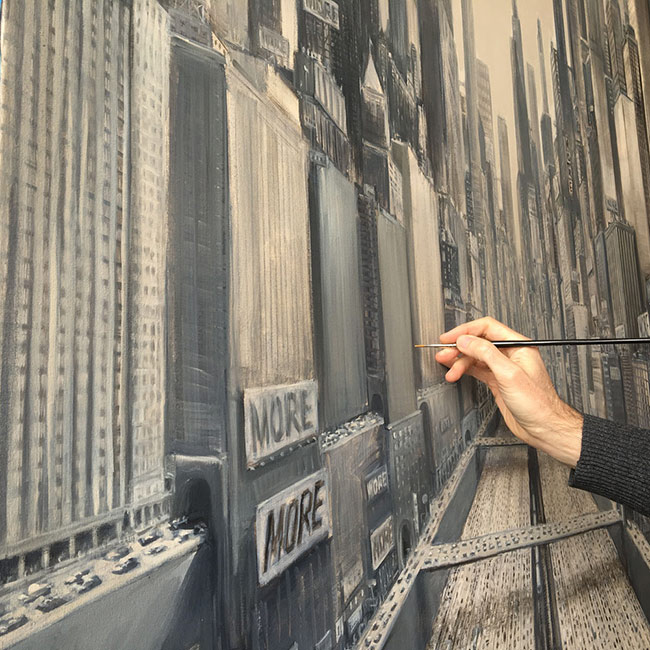 Throughout the city I scattered billboards saying ‘MORE’. I intended this bit of dark humor to alleviate the bleakness of the painting, and make it more approachable. I wanted these signs to resemble an incessant mantra of an insatiable society.

Here is the finished painting. I call it ‘Course of Empire’. 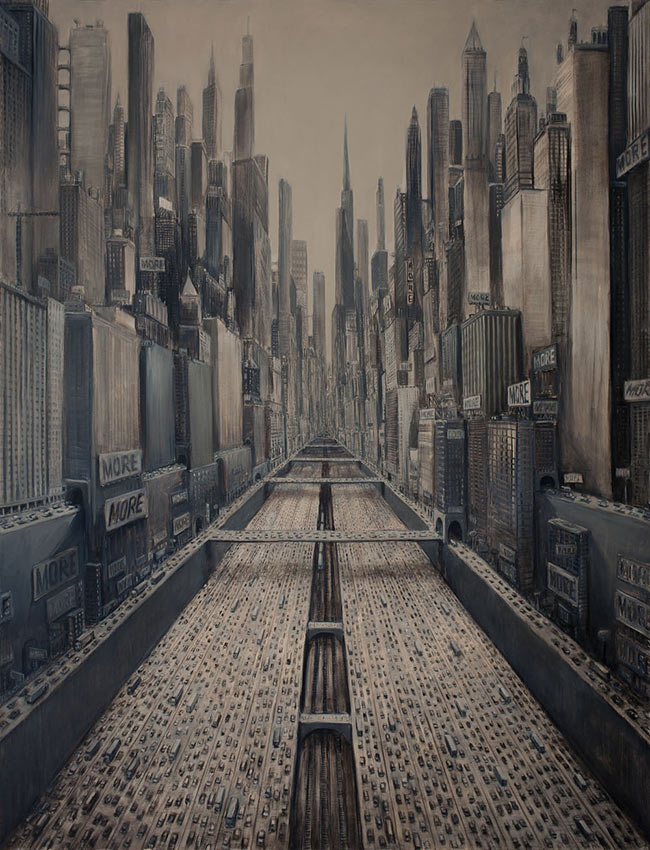