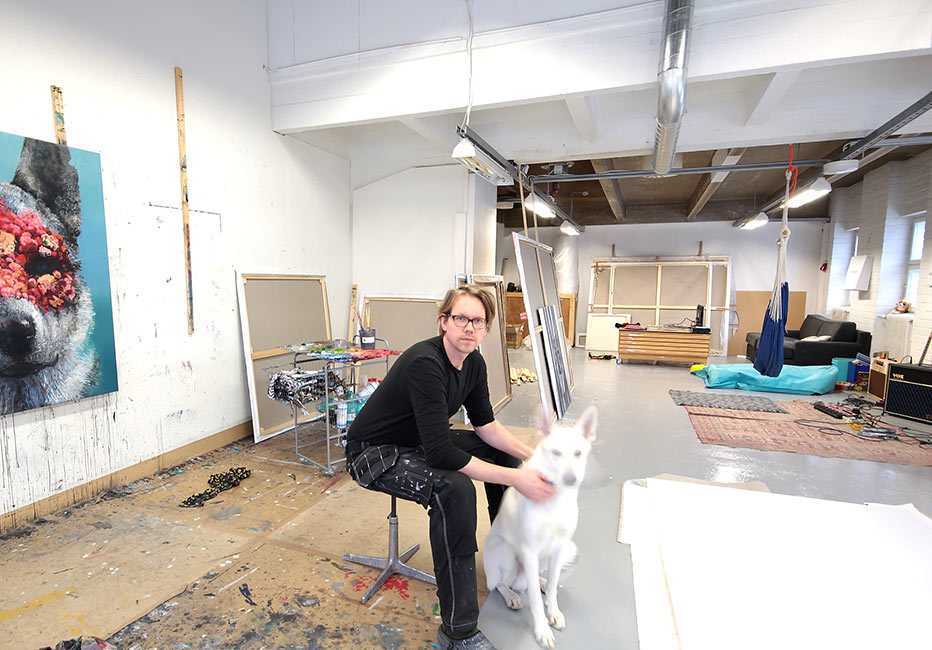 ‘Footprints of a Wolf’ by Samuli Heimonen

I’ve been painting pictures of animals for quite some time now. Everything I do has a surreal undercurrent. My paintings are not typical animal paintings, because they don’t focus primarily on animals, but something larger. Usually, animals are symbols or metaphors for the human psyche. They represent fears, dreams, worry or death; the very basic things in our live.

In early 2015, I started preparing work for an exhibition at my gallery in Helsinki (Gallery Heino). It was going to be a very important exhibition. I was painting pictures of icebergs. I loved the way the ice turned blue and green when it was underwater. I tried to paint the iceberg without water. It would dissolve to the dark background and change colors. In the middle of the iceberg was a lake and in lake there was a polar bear swimming. A very sad picture, but very strong at the same time. 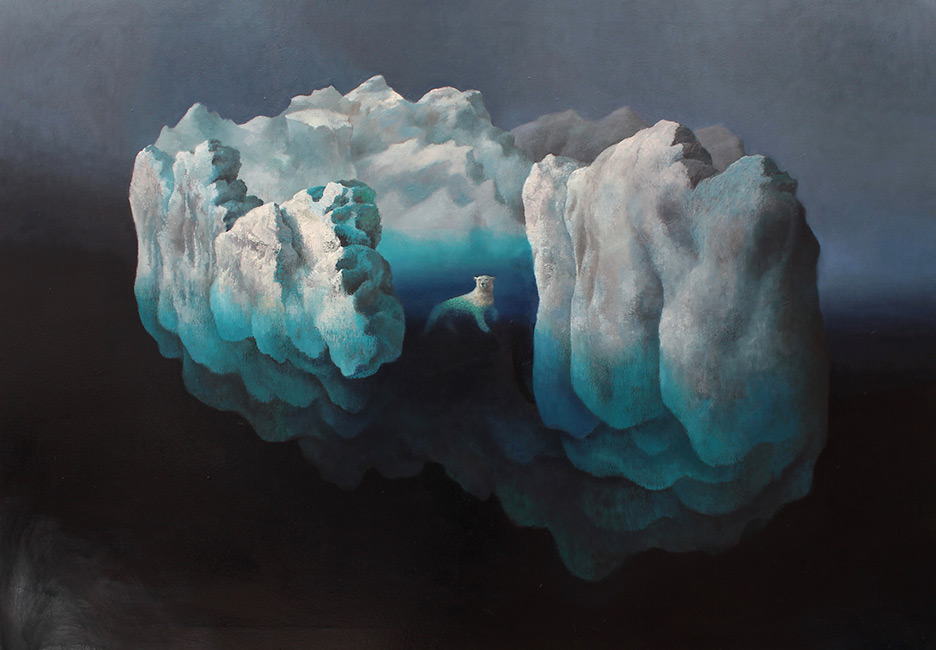 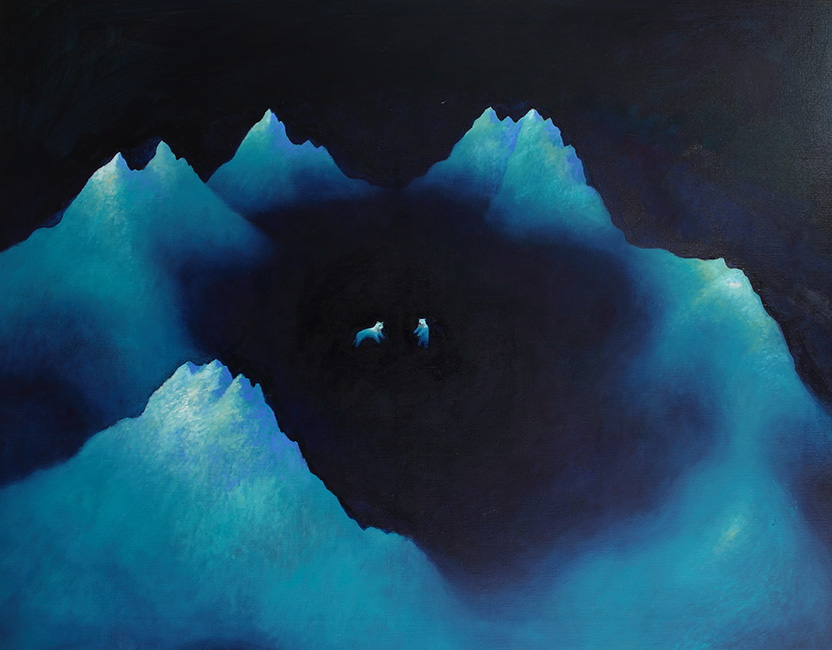 I thought my exhibition would be about icebergs and polar bears. Instead I painted a black and white picture of clouds and smoke. Inside the smoke you could see a form of a dark animal, a wolf perhaps. It was a picture about not being able to see something and when you don’t see something, your mind builds up the rest. In this case it becomes something very scary. Fear is one of the best builders of pictures. It has endless creativity for shapes and colors to frighten you. 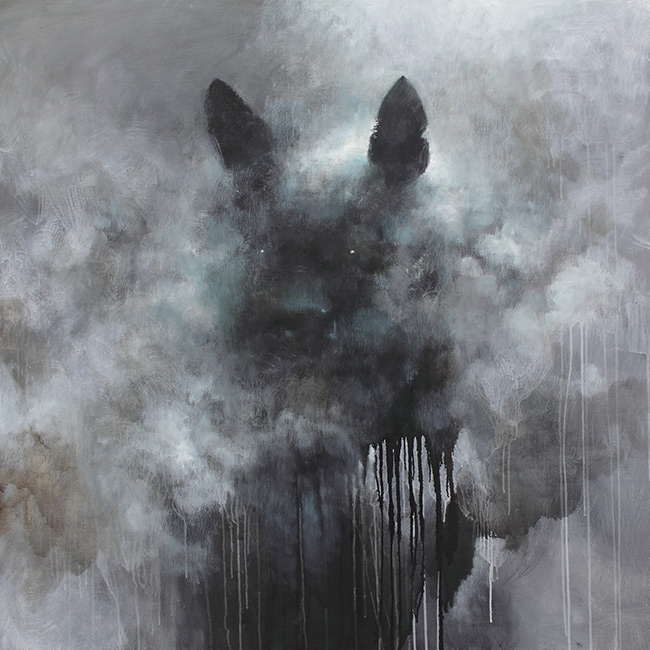 We have wolves here in Finland. Not that many, perhaps 220-245, but there is a continuing discussion whether to reduce the number of wolves or not. Sometimes this discussion gets very tense. For me, this was one of the first times I woke up to see a very distinct polarization between opinions. Today the polarization has gotten worse and it can be seen everywhere in societal discussion. For me, the wolf symbolizes this. It is something caught in between and without a place. It is a refugee. 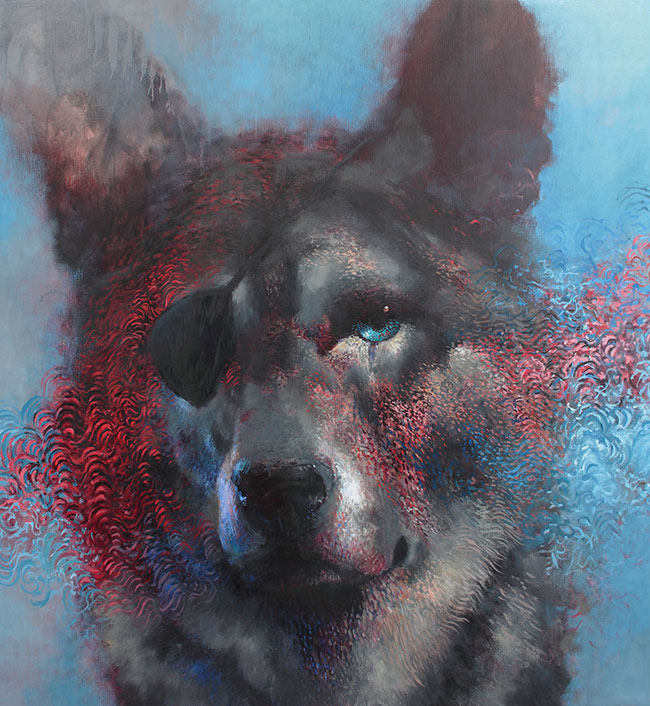 One of the reasons for me to paint wolves, is that I want people to see the dignity, beauty and the importance of the wolf as a wild animal. Because the wolf is sometimes considered as no good here in Finland, it’s important to broaden the image of the animal. For me the lesson is to learn how to live with the wild beasts. We don’t have to wipe them into extinction because we are afraid. We have to see the bigger picture, not only our backyard.

The first portrait of a wolf was about not seeing the wolf itself. The smoke makes a monster of the wolf. And we tend to fear most of the things we don’t know or can’t control. This painting was, ‘The Grandmother’. The name came from the fable ‘Little Red Riding Hood’. I painted two more portraits and it became a triptych. The wolf comes out from the color haze and in different portraits you can see different parts of the wolf. 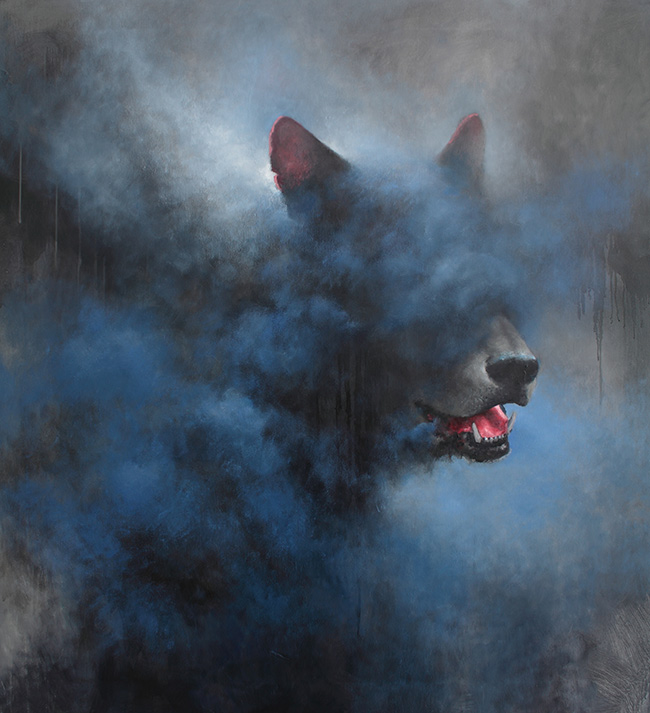 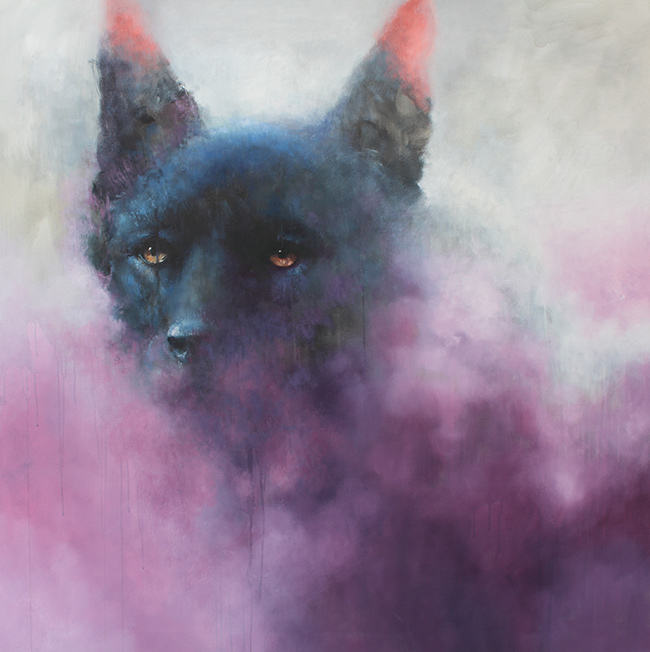 In some paintings, the wolf represents the real wolf as we know it. In other paintings, the wolf is only a surface or a cloth and the real idea can be found in the style of painting or in the colors. It is very important for me that my paintings are as visual as possible. Usually there is also a deeper idea or subject matter but the whole point in painting is make something visible.

It was very important that these pictures were portraits. I wanted to personalize the wolf. It should be somebody important and recognizable. My aim was not to make pictures of anatomically correct wolves. It was obvious from the beginning that my subject was the idea of wolf. It could look like a cat or a dog sometimes. It was about the mental image that would change every time we saw a wolf in a new context. 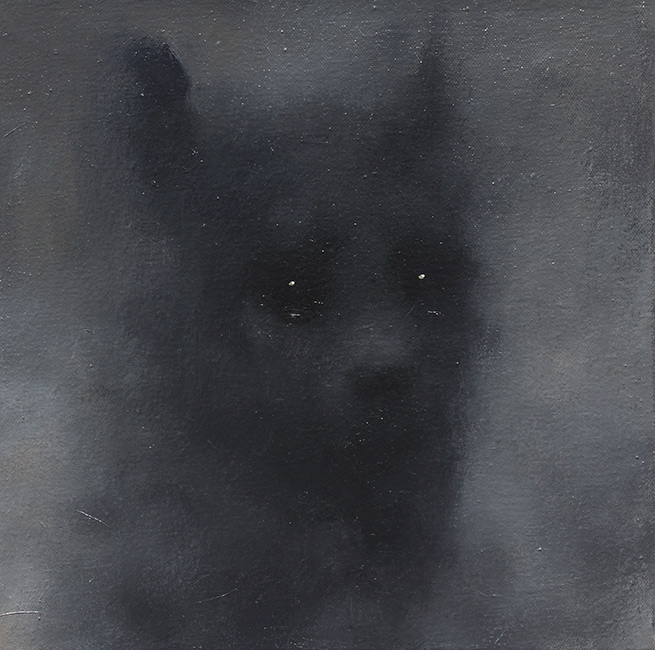 I got very interested about the story of ‘Wolf of Gubbio’. I had been teaching in Italy on a few occasions and I knew that the wolf was in the very foundation of Italian Mythology. Wolfmother had fed baby Romulus and Remus, who later founded the city of Rome. ‘Wolf of Gubbio’ is a story about Saint Francis meeting a wolf in the town of Gubbio. The wolf had terrorized the town for a while and the people were afraid to leave the city walls. Saint Francis was in the city and wanted to help. He offered to mediate and went to meet the wolf in the forest. The wolf found Saint Francis quite quickly and approached him in an intimidating manner. Saint Francis spoke to the wolf and told him about the fear of the people. He said that the wolf would be offered food if he would stop attacking people. The wolf understood Saint Francis and put his paw in Francis’s hand. They walked into the city and Saint Francis told the people about the pact he had made with the wolf. From that day on the wolf walked freely in the town and was fed by the people. No trouble was caused by the wolf anymore. Later the wolf lived with some family and was buried in the cemetery when he died.

I got a chance to visit to town of Gubbio when I was teaching in Italy the last time. What a glorious place. I found a little museum that was supposed to be the home of the family with whom the wolf eventually lived. A very strange place. In the crypt you could find a creepy taxidermy wolf in a glass box. In Gubbio, the wolf was everywhere. It was in frescoes, statues and in the gift shops all around.

I also painted landscape pictures. One of the first ones was the ‘Wolf of Gubbio’. 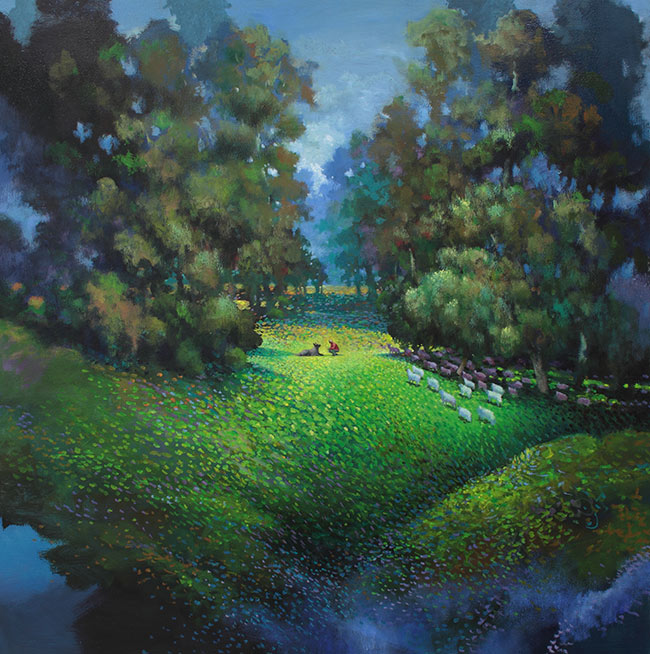 There you can see Saint Francis kneeling and talking to the wolf. All the sheep are hiding in the shadows. I wanted the picture have a very colorful and almost animated feeling. Francis and the wolf are only a small part of the landscape. I wanted to emphasize the landscape and the place where the meeting happened.

I did a very big canvas of sheep and wolves called, ‘Nothing bad can happen on such a beautiful day as this’. It was based on a painting by Albert Bierstadt called ‘California Spring’, that I really liked. I started with the basic composition and continued the picture in my own direction. The name comes from a memory of a beautiful summer day. When the day is beautiful enough, you have the feeling that nothing bad can happen now. The beauty protects us. But wars will begin on beautiful days also. The painting reminds me that these feelings of safety and beauty are very important, even though they are not always true. I believe that beauty protects us when we see and recognize it. 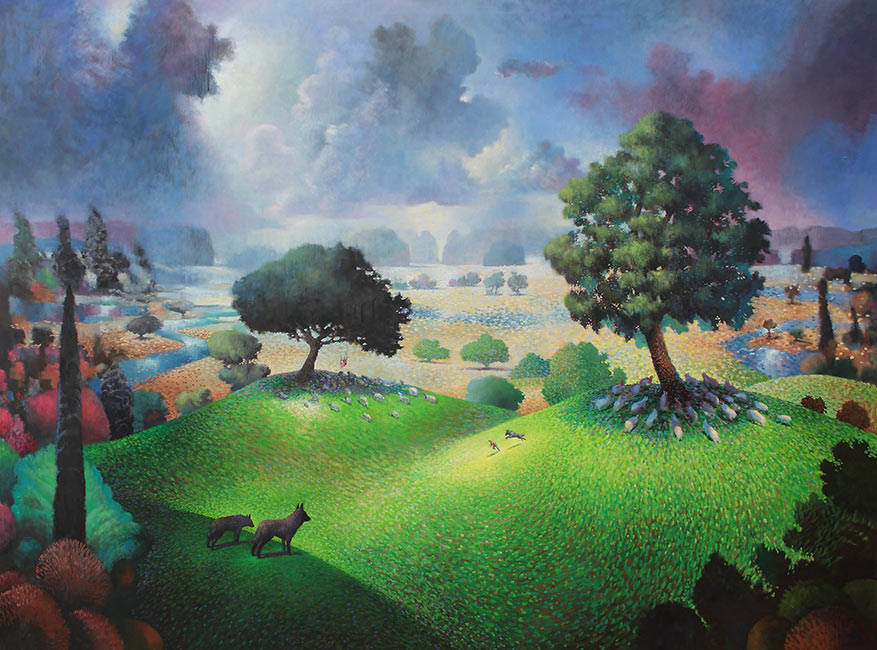 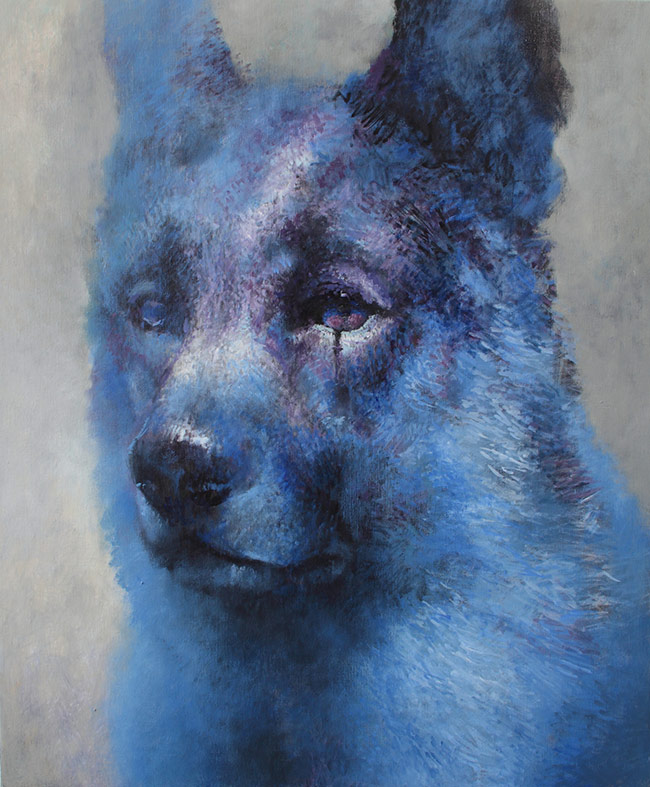 The series of wolf portraits has grown during these years. There are at least 4 or 5 different sub-series. They usually measure 120cm x 110cm, but I have done a small series of tiny wolves also. They are more playful and experimental than the bigger ones. I painted a small wolf called ‘Terminator’. It was based on a movie poster of the film The Terminator. The wolf has two sides. One is innocent and the other one is scary and fierce. 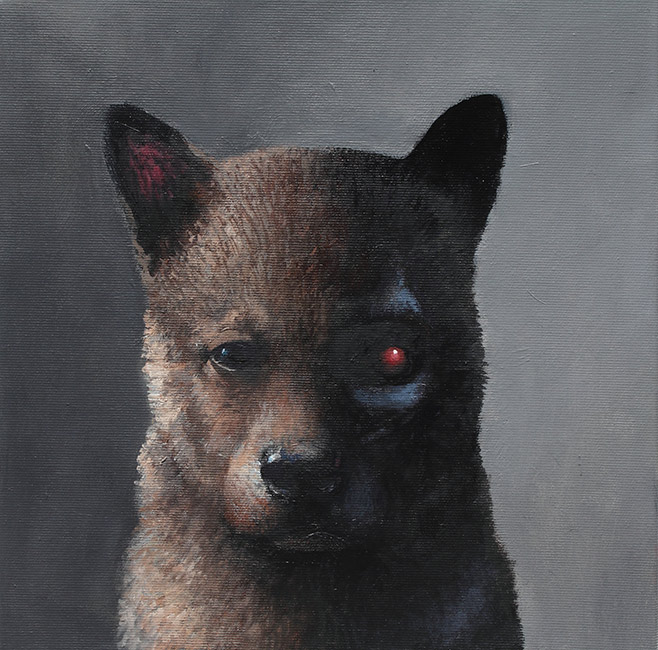 At the end of last year I had a feeling that the series is complete and that I should move towards other subject matter. At the same time I thought I was finished, I felt I was only at the beginning of painting wolf portraits. It’s hard to explain. I really wanted to move away from wolves, but I realized I could dig even deeper and discover even more. So I continued to paint them and it seems that the well isn’t dry at all. The new series will be ready this spring or summer. 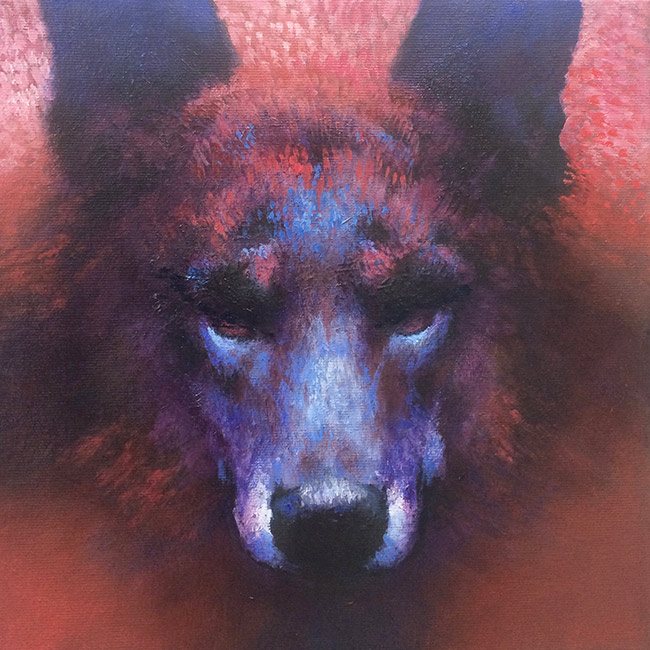 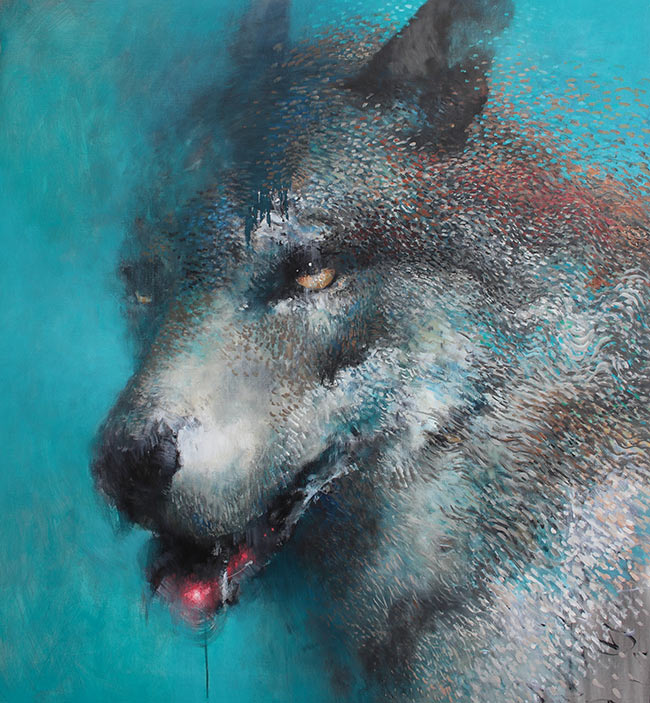 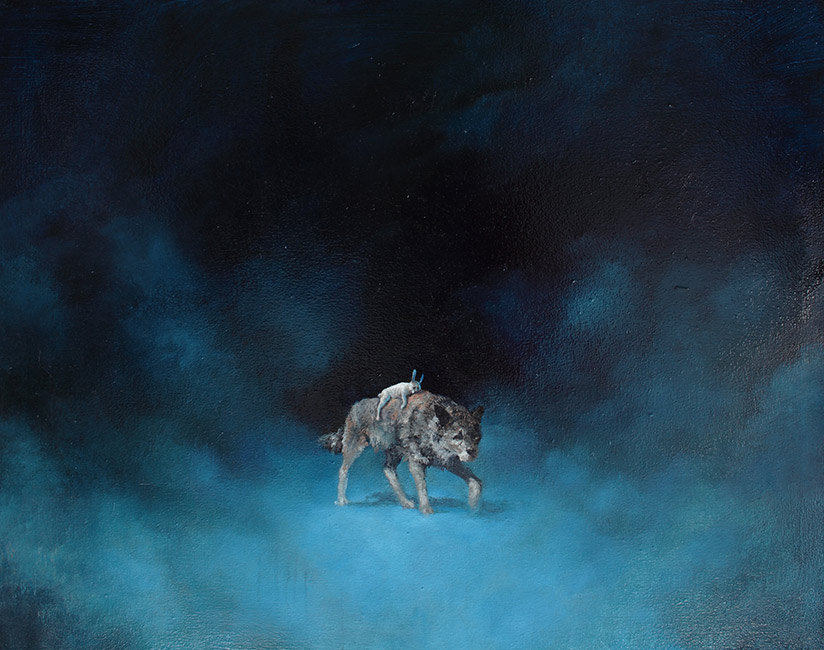 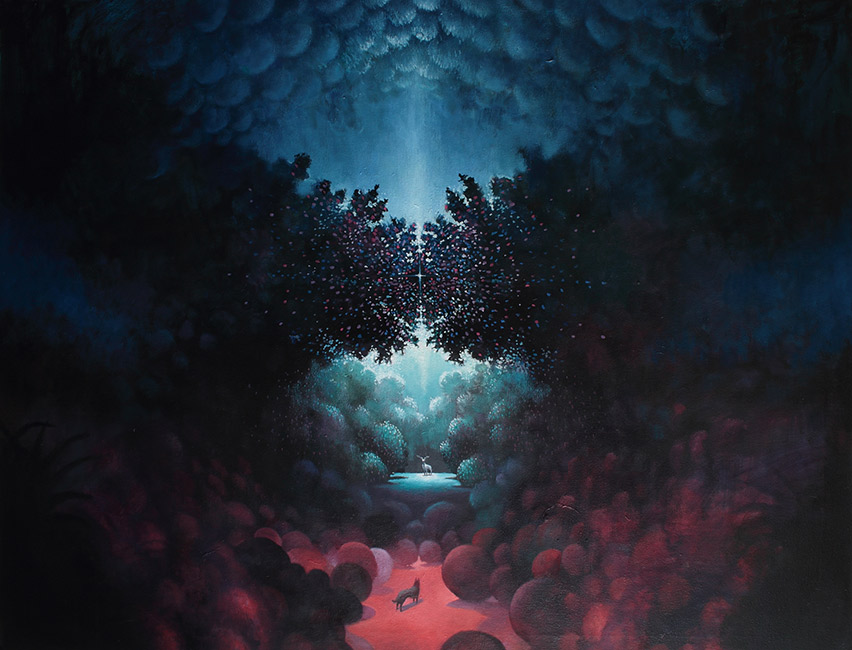 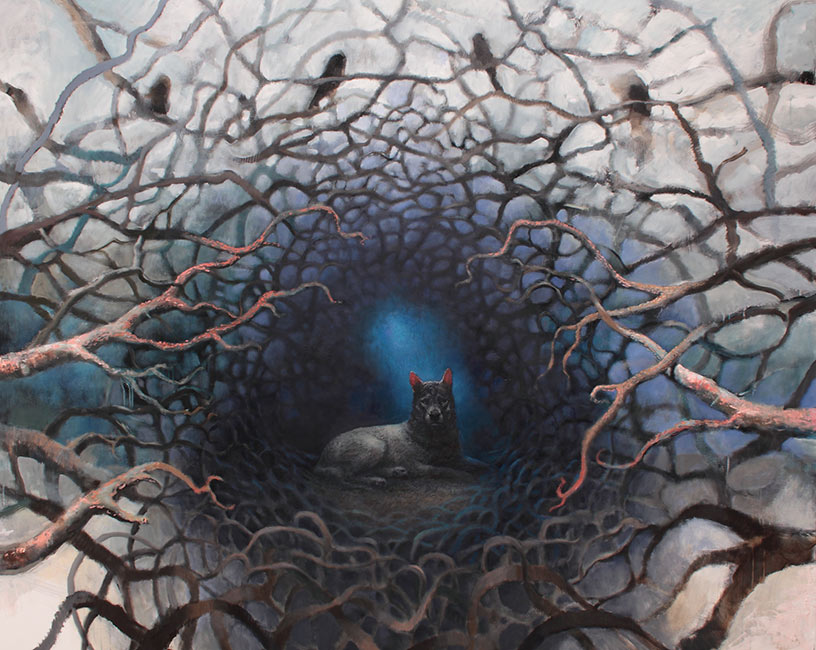 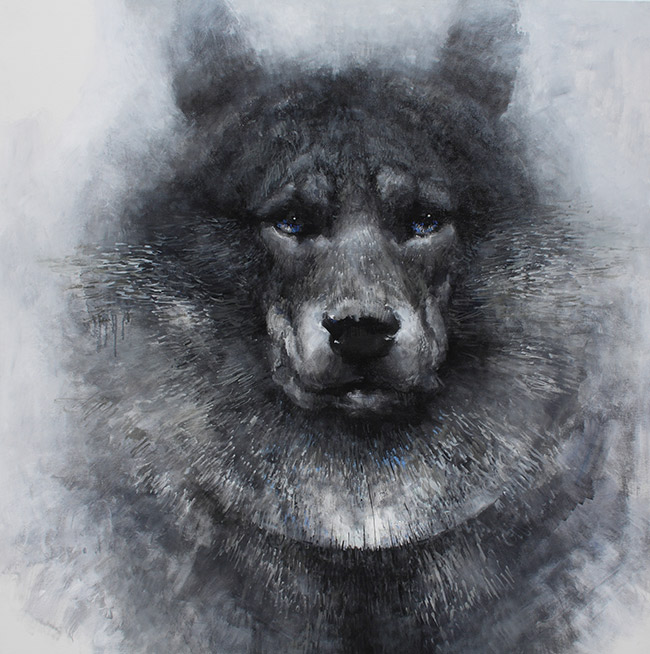